Transport in the Outer Hebrides is probably easier than you might imagine. It’s certainly more interesting.

As you might expect from a chain of islands some way off the mainland, there are only two ways to get to the Outer Hebrides. While islands like Skye in the Inner Hebrides have road bridges that link them, getting out here requires either catching a ferry, or flying. Sailing over is the usual way, and I’ll come onto that shortly, but flying into the Outer Hebrides is potentially part of the fun of getting here.

There are three airports in the archipelago – Stornoway on Lewis serves the (only) major town in the group, while Benbecula around halfway down is the most important airport as it’s used additionally as an army base. The third airport, however, is at the south end, on the island of Barra. And it is … unique. Not just in the UK, but in fact worldwide. 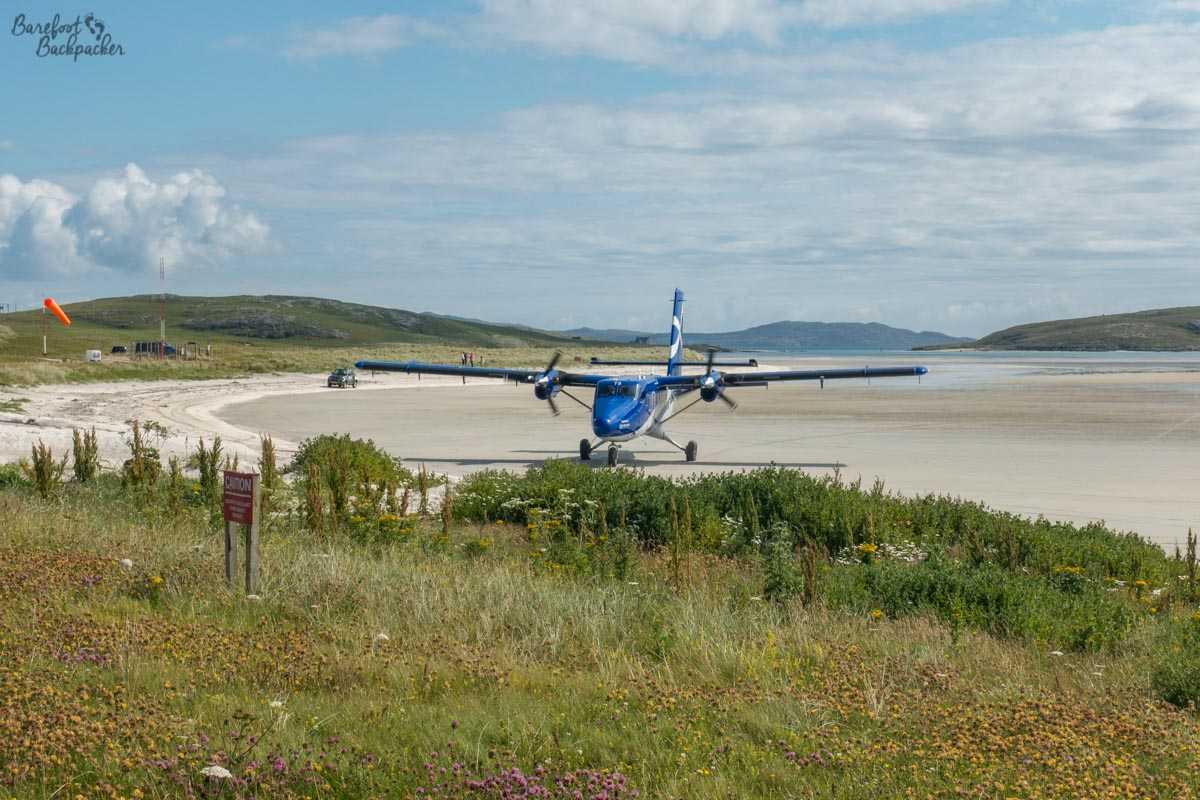 No, your eyes are not deceiving you; that aeroplane is on the sand and no, its not got lost.

Barra airport is the only airport in the world where regular scheduled flights land on the beach. You’d probably have thought there’d be an airport in the Caribbean or on some Pacific atoll in Kiribati or somewhere, but apparently not.

One of the issues with the Outer Hebrides is that many of the islands are fairly rocky and undulating – finding enough space on any of them to build a runway is pretty hard. It’s no accident that the airport and army base are on Benbecula, as it’s one of the flattest islands. However, relying on the ferries is dangerous as the weather is pretty unreliable. Indeed on the day I eventually left the islands (the day after the “hottest day recorded” in the rest of the UK, hah!), a couple of the ferry routes in the south of the region were disrupted due to wind. 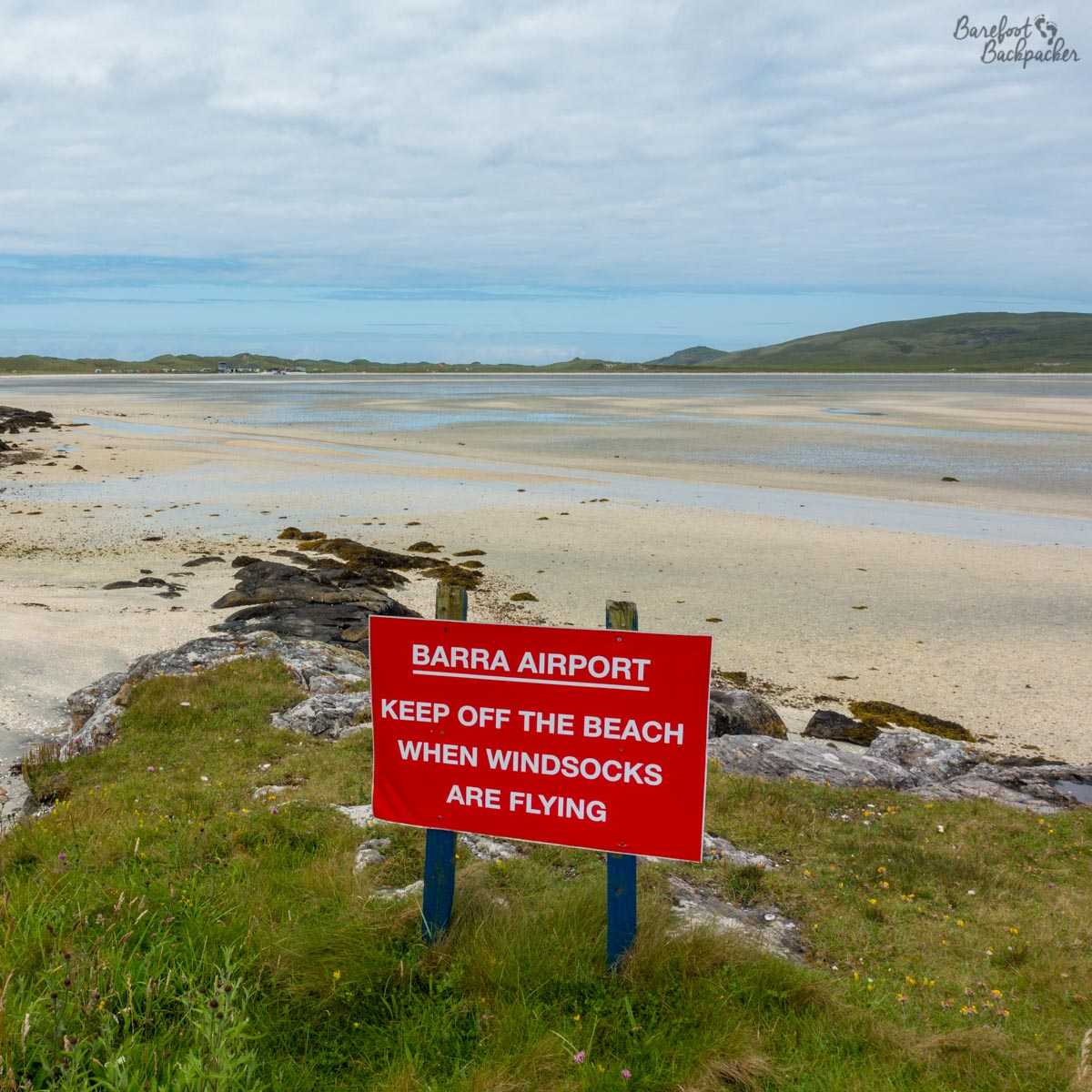 The solution on Barra is to utilise one of the beaches as an airport. The advantages are a naturally flat, hard surface that needs little upkeep; the disadvantages are that flight schedules are affected by things such as high tides, and the limit to what can land. There are two flights a day, to/from Glasgow, operated by 20-seater propeller planes – this isn’t an airport for an A320; rather, it’s reminiscent somewhat of flying in Vanuatu.

The airport itself is a small building on the dunes, most of which is given over to a particularly well-regarded café serving home-made cakes and sandwiches. The check-in counter feels more like an afterthought – a window on one side of the café room. The café is incredibly popular with tourists, who often aren’t flying, but want to take advantage of either the café windows or the road and car park outside as a place to watch the planes arrive and depart. Discussions amongst them suggest they’d love to fly into, rather than out of, the airport; today however they’ve arrived by ferry, either from nearby Eriskay or from the mainland at Oban.

Indeed, as mentioned above, the usual method of getting to the islands is by ferry. Pretty much all the ferries there are operated by the same company: Caledonian MacBrayne (Calmac), and they have a number of routings that operate at least once a day. I caught the ferry there from Oban to Barra (Castlebay), while on the way back I sailed from North Uist (Lochmaddy) to Uig on Skye. The most northerly sailing is Stornoway to Ullapool, possibly the only instance where the town on the mainland is the smaller and harder-to-reach place. 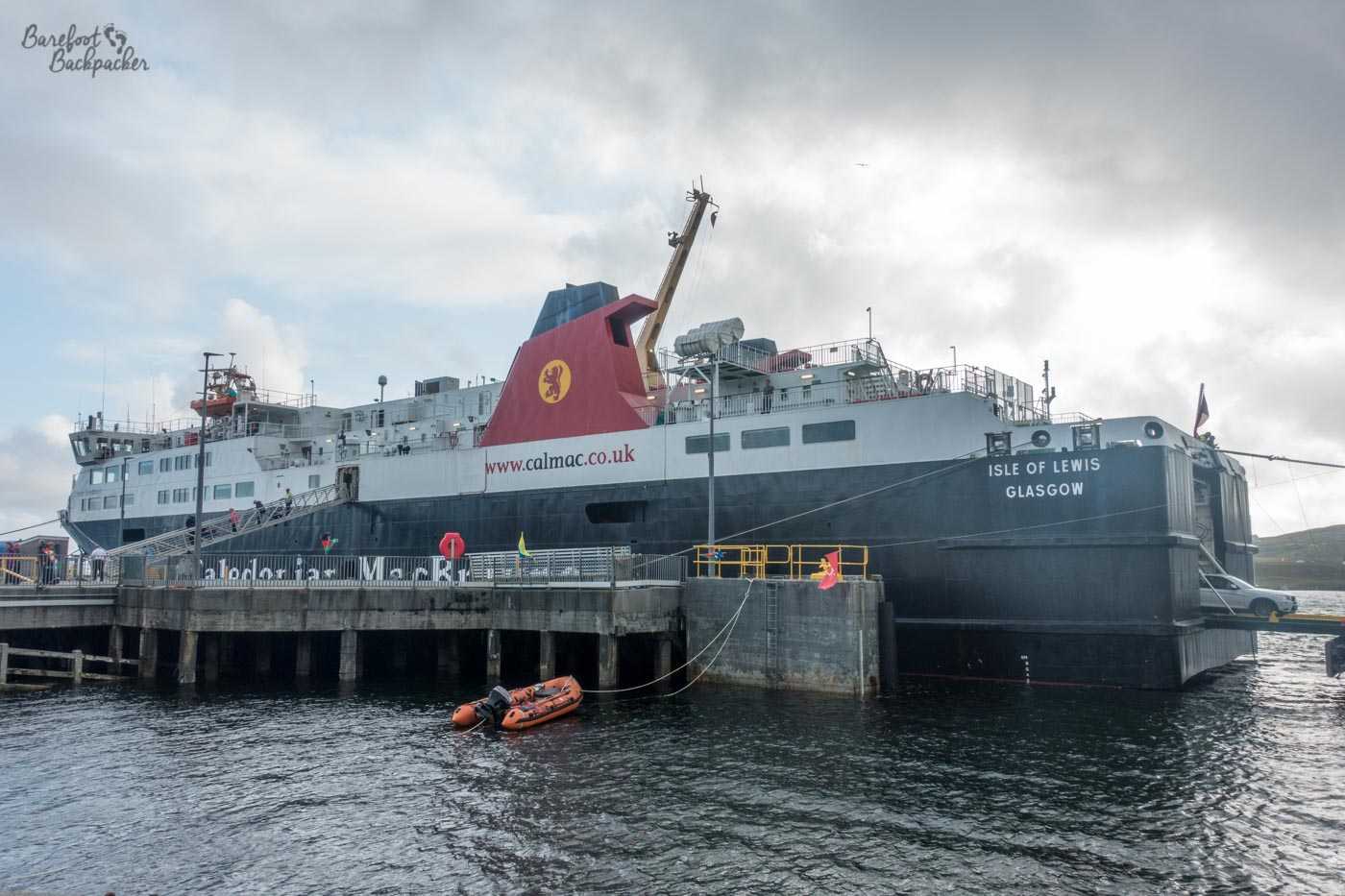 The ferry from Oban, parked up at Castlebay, Barra

The ferries are pretty large beasts, with a good range of amenities, and are comfortable to ride on – as mentioned above they sometimes don’t sail when the wind gets really bad, but that’s more to do with swell in the ports rather than the safety and comfort of the journey itself. They take cars and foot passengers, and the journey from Oban to Castlebay may sound like a long 5½ hours but it’s far more fun and interesting than an aeroplane. One personal point was we passed within sight of Ardnamurchan lighthouse, the point where we finished our hike across Great Britain earlier that week. They tend to only run once or twice a day; while this isn’t a problem if you’re a pedestrian, it helps to book in advance if you have a car.

Smaller ferries ply the routes between some of the islands; the most important being those between Barra and Eriskay in the south, and Berneray and Harris in the north. These ferries are much smaller than the mainland ones – often only having one upper side deck for pedestrians, and not a great deal of vehicle space. I tended to buy my ferry tickets for these journeys from an official who wanders through the deck during the sail, so don’t worry if you can’t see a ticket office or anything. 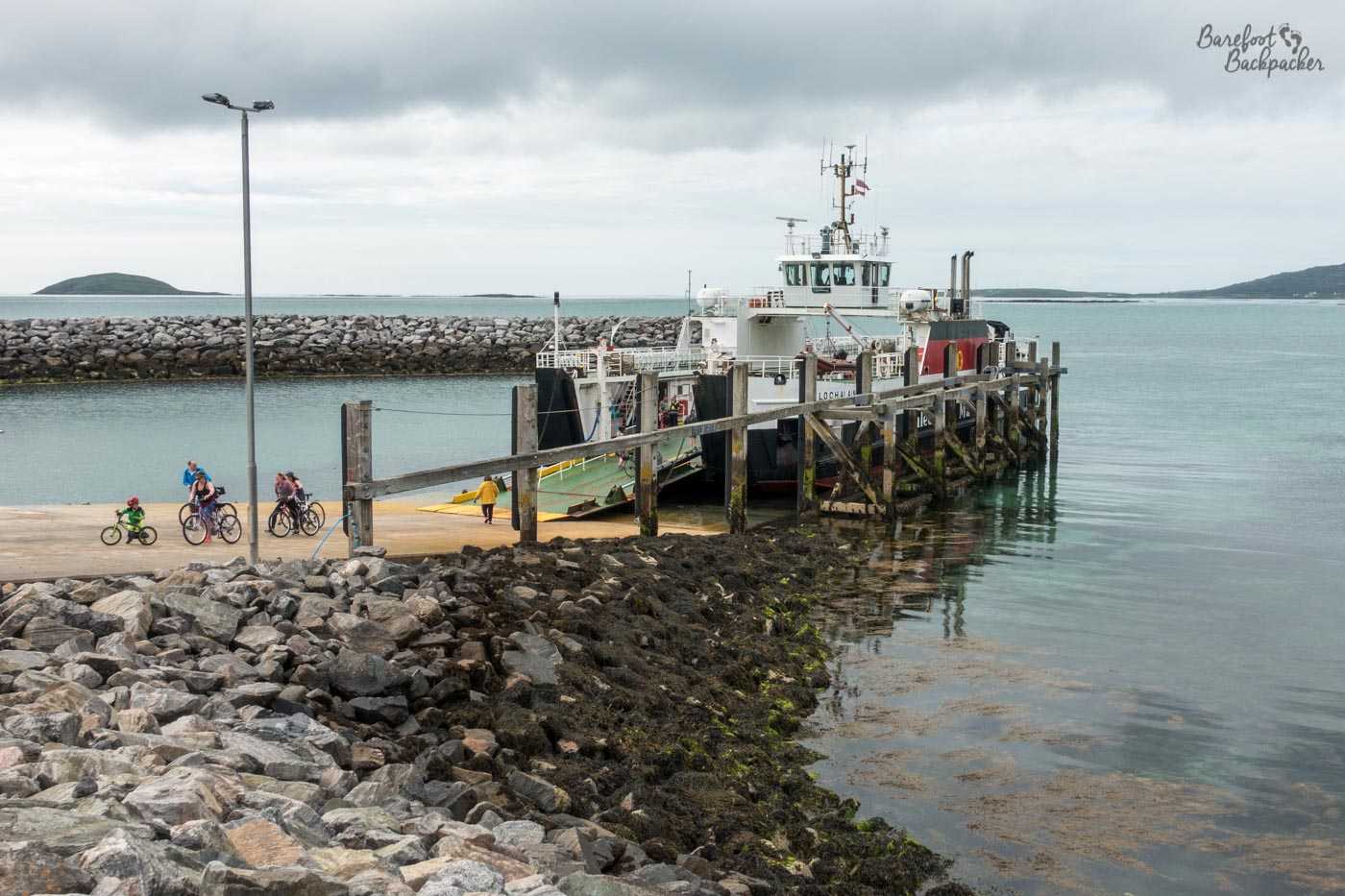 One of the small ferries that link the islands. This is the view at Eriskay ferry terminal, with the boat to/from Barra

There’s very little to do on board these inter-island ferries – no shop, no entertainment, there may be wifi – except look out at the water and the passing islets. Having said which, the scenery is pretty cool and if you’re lucky you may even get to see some passing sealife; on one of the ferries I overhead a family saying last time they caught it they saw whales swimming alongside the ship.

There used to be more ferries, but in the last couple of decades there have been a couple of causeways built. This means it’s possible to drive from the quayside at the south of Eriskay all the way to the jetty halfway along Berneray, some 65 miles to the north, connecting both with the larger and notable islands of South & North Uist, and Benbecula, and a myriad of smaller and tidal islands. There is a bus service that does the trip; usually operated by small minibuses that have two settings: ‘virtually empty’ and ‘rammed full’. They only run about four times a day, but they connect the major towns and mainland ferry terminals (Lochmaddy, Lochboisdale, and the urban sprawl on Benbecula halfway along that serves as a kind of ‘terminus point’) with the ferry quays at either end. However getting to St Kilda, over in the far west, is a different matter altogether. 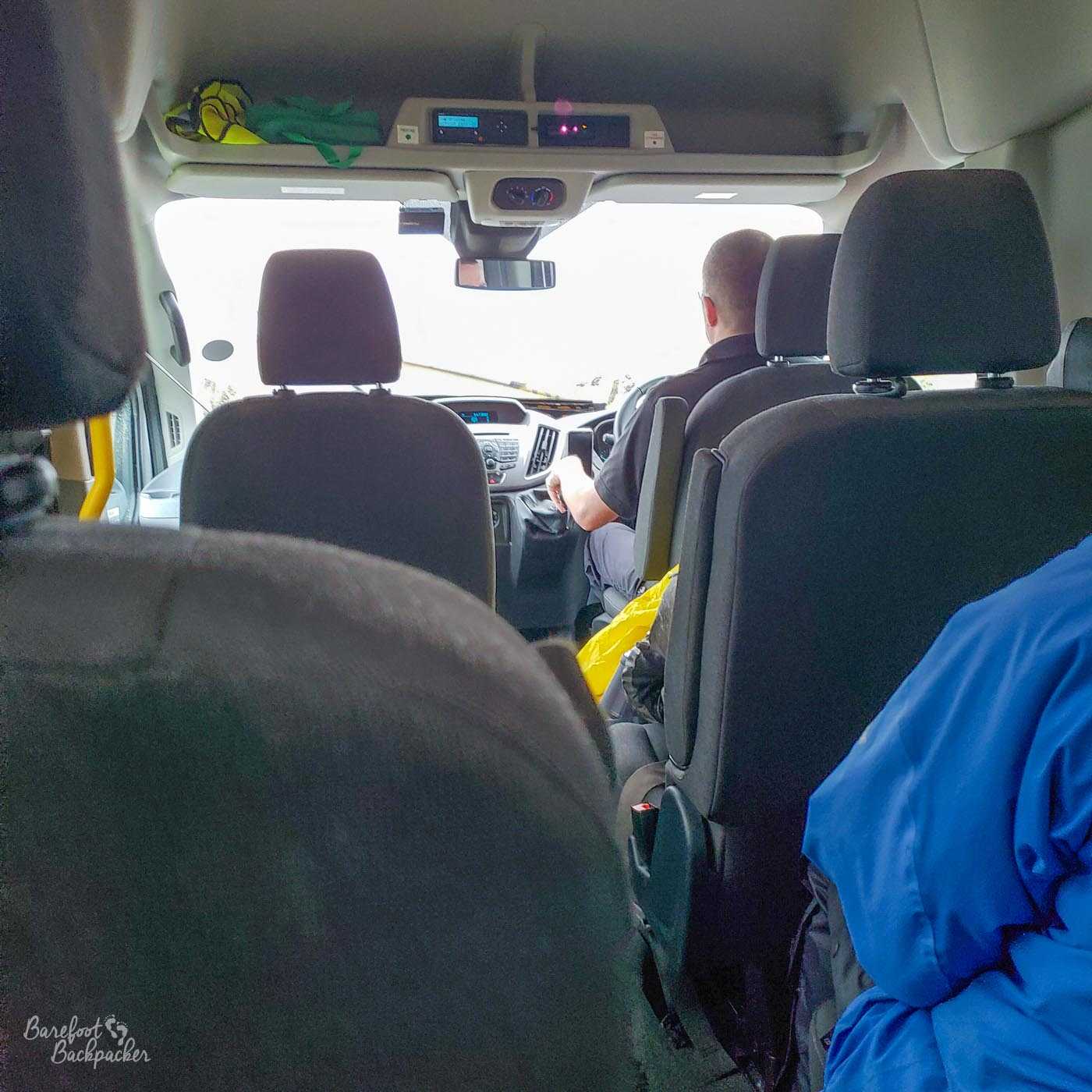 I seem to not have any pics of the outside of the buses, but this is what they look like inside – typical 16-person minivans, as often used by sports clubs

Of course, if you’re feeling more energetic … much of the spine road has been designated a long-distance cyclepath – the Hebridean Way – and certainly when I visited I came across quite a number of cyclists who were traversing the whole way. It runs from halfway down the island of Vatersay, south of Barra, and finishes at the Butt of Lewis lighthouse in the far north. Coterminous with this is the Hebridean Way long distance footpath that takes a more, shall we say, rugged and scenic route to do the same journey. As an aside, it’s interesting to note the sheer size of the Harris/Lewis island means that island alone accounts for half the length of the path. The footpath has been designed to avoid the roads in the main (they rarely have pavements) which means it may look like it takes a rather circuitous route over the hills (like the Pennine Way) but it’s probably worth it; just avoid the sheep. 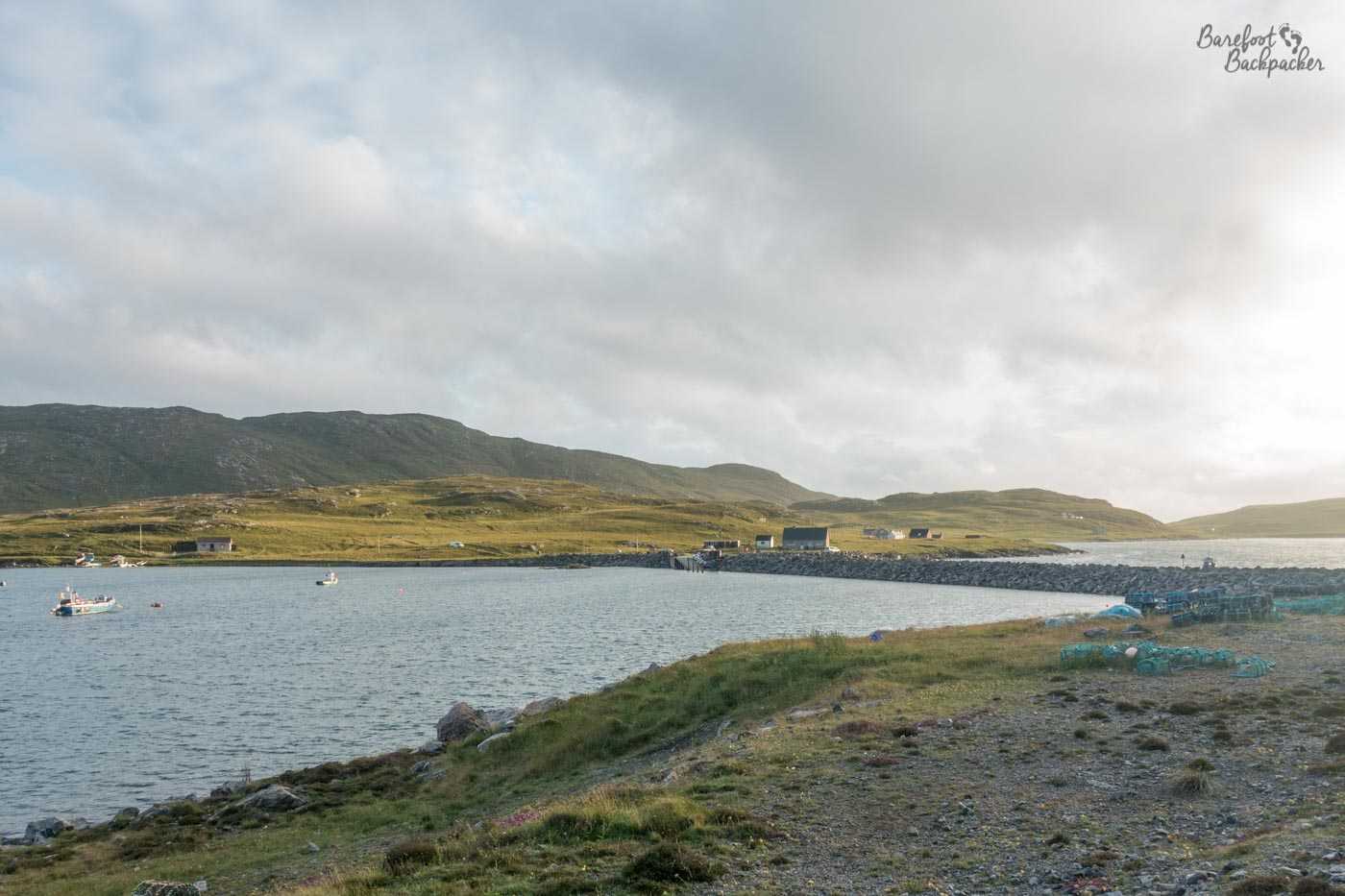 Looking out over the causeway from Barra towards Vatersay

The majority of roads on the islands are single-track with passing places, and it’s customary to wave at every vehicle that passes when you use them. There is one major road up the spine of the islands, but it, surprisingly, by-passes most of the towns, and you have to branch off to reach them. Aside from these branches, most of the roads are not much more than farm tracks or country lanes, and once the ferries have off-loaded, it’s rare to see too many cars or vans. The only real time you get stuck in traffic is if you’re headed to a ferry just as another one arrives, and you have to wait in a passing place for everyone to come past.

The one thing though that takes a bit of getting used to for an urban soul like me is, when you’re walking down the road, pretty much every car that passes waves at you to say ‘hi’.

It’s also quite an easy place to go hitch-hiking. In general it’s something I’ve never done, but twice on my journey through the islands (both times in North Uist, oddly) I was picked up by people passing in cars all too keen on giving me a lift somewhere. It’s a very friendly place. 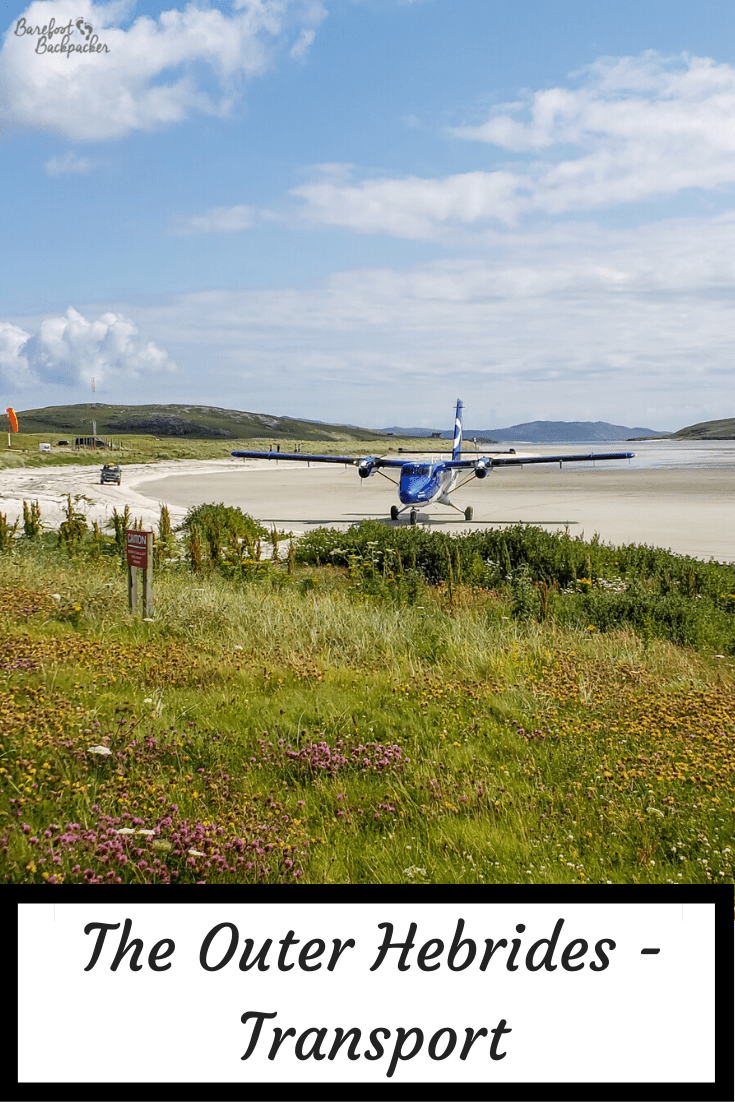