Hi. I’m Ian. Pleased to meet you 🙂 Sit down, kick your shoes off, grab a beer, make yourself comfortable. 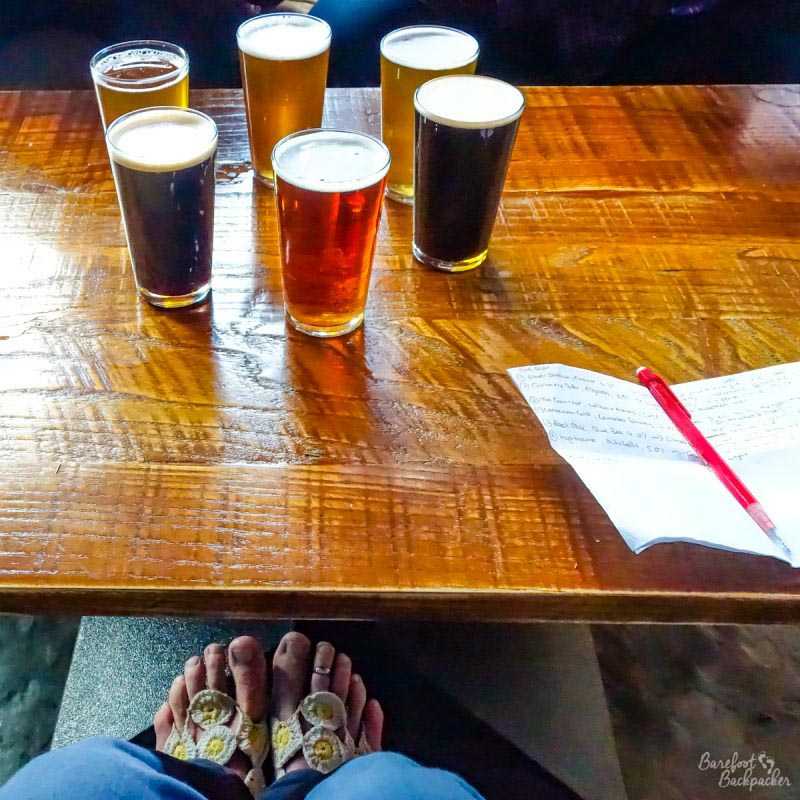 Lots of beer at the “Devonshire Cat”, in Sheffield.

This blog provides a record of where I’ve been, when I can still remember them, while allowing people to travel vicariously to some places that they are unlikely ever to visit. There is very much a theme of “I go to these places so you don’t have to”, but if you do choose to go to any of them, I hope these observations will prove useful.

My travels have always been slightly offbeat. My first adventure abroad was at age 11 when my uncle took me somewhere he’d been a few times on business. So, unlike most young Brits at the time, my first destination wasn’t Ireland, France, or a Spanish island, but rather Denmark, with a day trip to a wet Sweden thrown in for good measure. Evidently the experience didn’t put me off, as from then on a healthy desire to see the world followed. Having penpals in my teenage years helped, and my first proper solo adventure in foreign languages came at the age of 19 when I ventured to Yugoslavia. A country in civil war at the time. To meet a friend I’d only written to three times. And with virtually no money. Strangely she still speaks to me … 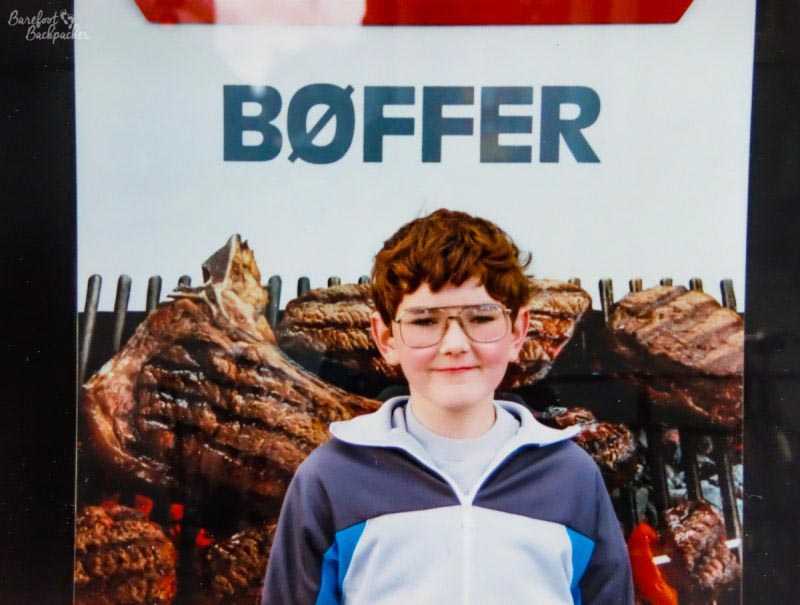 Since then my travels have been varied and somewhat unique. Attracted to places more off-the-beaten-track than most, my aim is to prove to the world (and myself) that every place is worthy of mention – most people don’t live in tourist hotspots. 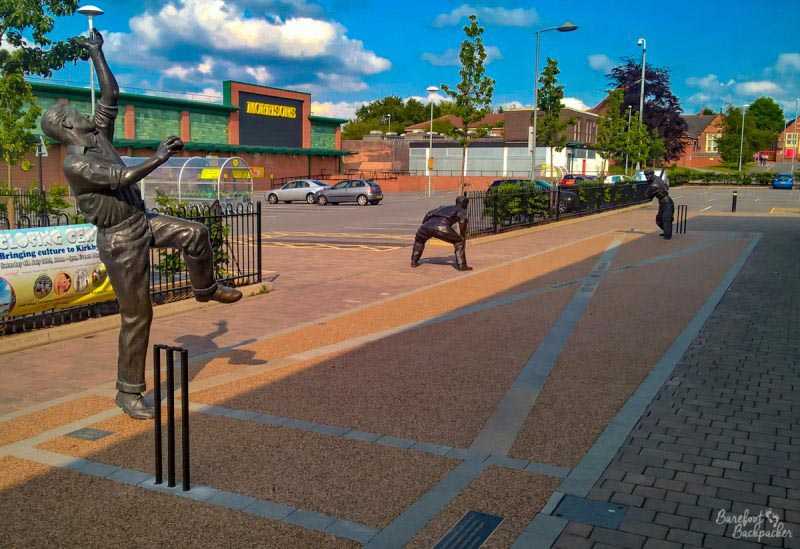 No tourists would ever come to Kirkby-in-Ashfield, unless they’re desperate to see statues playing cricket. Harold Larwood, Bill Voce, and presumably Don Bradman.

Travel had, I think, been in my blood anyway; my step-father had been in the merchant navy and most of my immediate family had visited relatives in the USA in my childhood, which was pretty rare in those days.

I also have an obsession with maps, and a feeling of wanting to know what lay ‘beyond’ the confines of them; even today I have a ‘liking’ for borders and frontier zones, and will actively plan out a route specifically to cross the most obscure one possible. Because I can.

Over time, I have developed a strong interest in socio-political history; yes old buildings are pretty, but my interest is in the other things that humanity has done – the places where we have changed the world, for better or worse. In addition, as I mature like an old cask of brandy, I seem to be becoming unusually more socialist and firebrand, and have developed a particular interest in revolution, dictatorships, and civil strife – places where people have been repressed, and places where they have fought back. For instance, I was drawn to Cambodia not for Angkor Wat which I only visited in passing, but for The Killing Fields and Pol Pot’s grave – “I was born in Year Zero”, even.

Unusually for travel bloggers, I don’t have a ‘bucket list’ (in fact I have an ‘anti-bucket list’ of places I’ve no desire to go, though this contains mostly small hot islands in the ocean full of honeymooners). Rather, I visit places because I want to – there’s something there that I find interesting, even if no-one else does. This means I’ve sought out places like Timor-Leste (‘the’ student-agit-prop cause when I was at University), and the Aral Sea, where I could stand and see the devastation that humans have wrought in the name of ‘progress’. Some places I want to visit in the future are Bolivia; the civil war reminders in El Salvador; the genocide sites in Rwanda; the food, culture, and scenery of Pakistan; the volcanoes of Vanuatu – but they’re in no particular order.

I also have a strong pull towards the natural environment – countryside rather than animals it has to be said, although being so close to elephants and hippos in Botswana was pretty awe-inspiring. My most relaxed state (on the road at least; ignore the tattoo) is when I’m walking alone in the mountains or forests, lost in nature, with only myself to worry about. 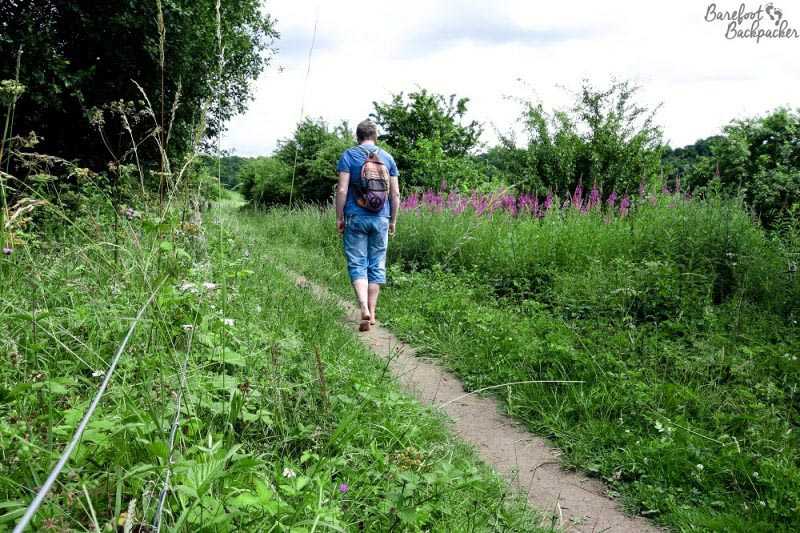 My most relaxed state, alone in nature.

I prefer to travel alone – this is for several reasons, including a penchant to be as flexible with my plans as possible (I do a lot of things last-minute, even down to waking up not knowing what country I’ll be sleeping in that night), an allergy to commitment, a dislike of having to rely on other people, and a general preference for being on my own anyway. This is also why I’m very bad at relationships…

When I travel, I go as light as I possibly can – I’ve not checked in baggage on an aeroplane since 2012. Partly because on my trips I move from place to place every few days (I get easily bored, and need to keep moving on) so it saves repacking, but mainly because it means I have physically less to carry so it’s much easier. 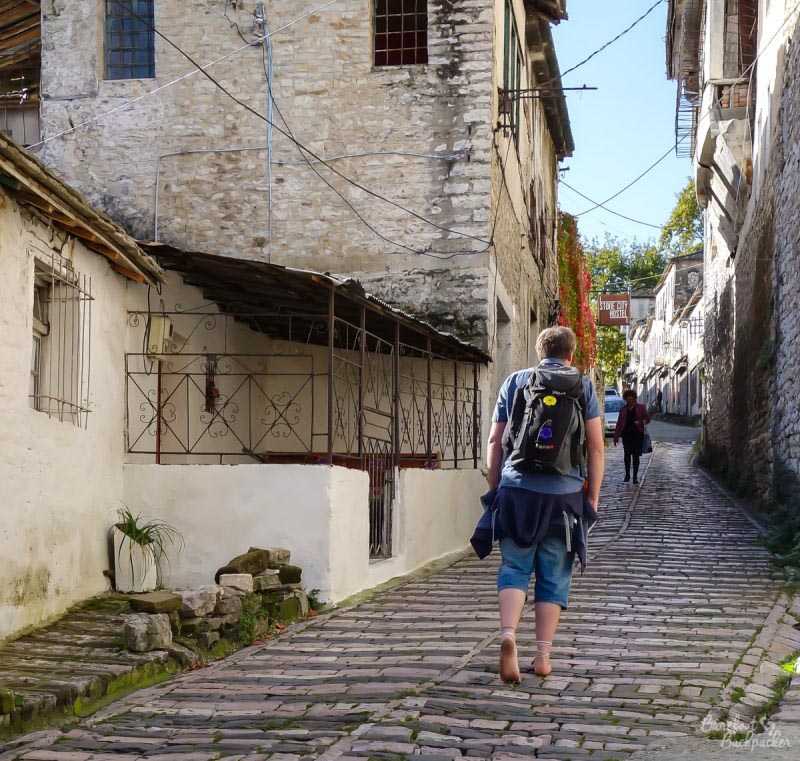 Walking to catch a bus in Gjirokaster’s old town, Albania. Yes, that backpack was all I took.

Although my blog has a metaphorical name, I do prefer to be barefoot. The main reason isn’t anything esoteric or conceptual – my feet get too hot in closed shoes. That said, I enjoy the freedom that being barefoot gives – the relaxed, casual style and that sense of being unrestricted. I’m not always barefoot (I’m British, it’s cold & wet here!), but also I don’t yet feel self-confident enough to push the point more; that said, people rarely notice because they rush by without giving me a second look; I do have some custom-made ‘barefoot sandals’ designed for this reason.

So, who am I?
It’s possible I defy any specific definition. A cynical hippie, caught on the cusp of Generations X and MTV, a middle-class background with working-class ideologies, a control freak who hates commitment, someone who wants to see the world but not spend much time in any one place. Taking as inspiration such diverse elements as Michael Palin, 18th Century diplomats, and The Littlest Hobo, my aim is to see as much of the unusual, the unknown, and the unappreciated, as I possibly can.