Yorkshire. The word conjurers up a myriad of images, from rolling moors to seaside cliffs, from cricket to rugby league, and stereotypical ideas of flat caps, whippets, warm bitter, and an incomprehensible accent. Most people have heard of places like Leeds and Sheffield, but also the North Yorkshire Moors, Scarborough, and of course the vampire-associated Whitby.

The Hills of West Yorkshire, near Marsden, where the Peaks merge with the Pennines, and snow falls at 10 seconds’ notice.

I suspect not many people think of the West Yorkshire area. Apart from Leeds, the general impression is one of industrial wasteland, of deprived ex-mining and ex-mill towns, of places with names that don’t resonate with people as interesting places to go: Dewsbury, Batley, Halifax, Huddersfield. Outside of the cities, however, the Peak District collides with the Pennine mountain range and the scenery is beautiful, the villages remote and, to coin a phrase, ‘quaint’, and for those not in the know, it’s a really unexpected find. Indeed, the setting is such that one might expect to see people searching the windy moors in search of forgiveness from their long-dead lover … 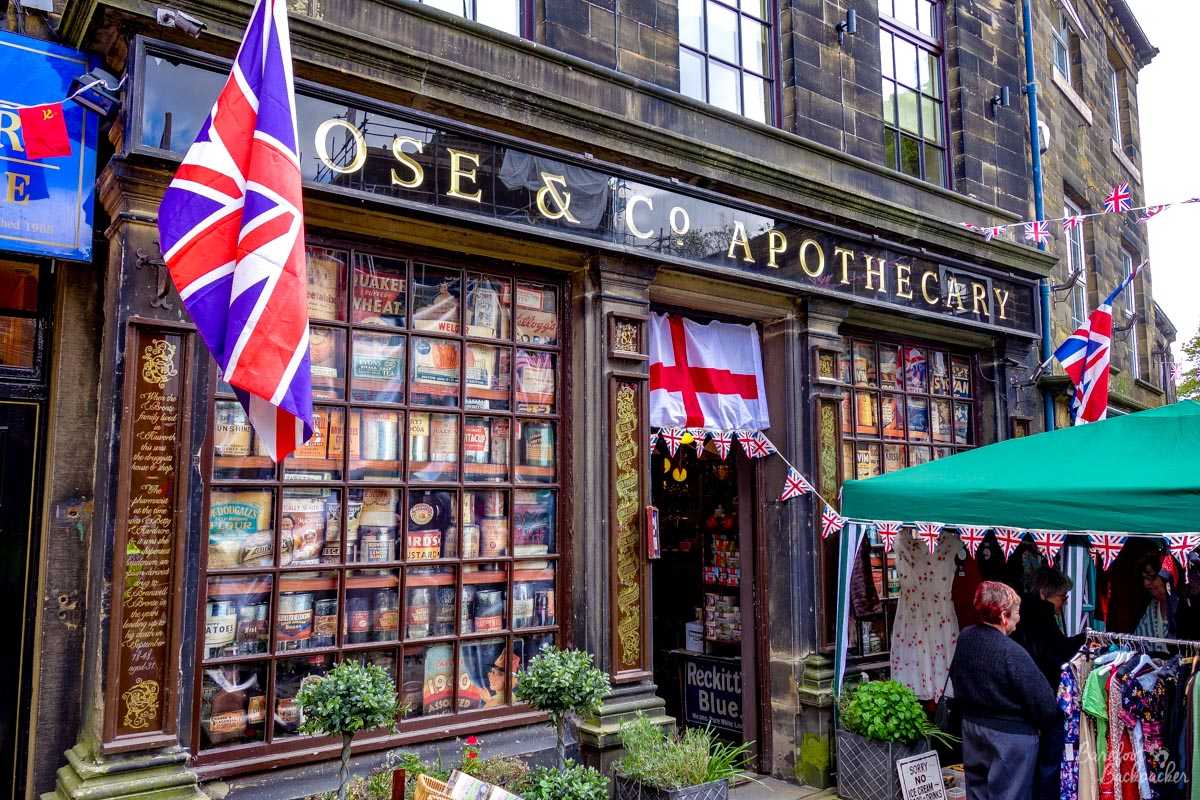 The shop in Haworth where Branwell Brontë developed his opium addiction. 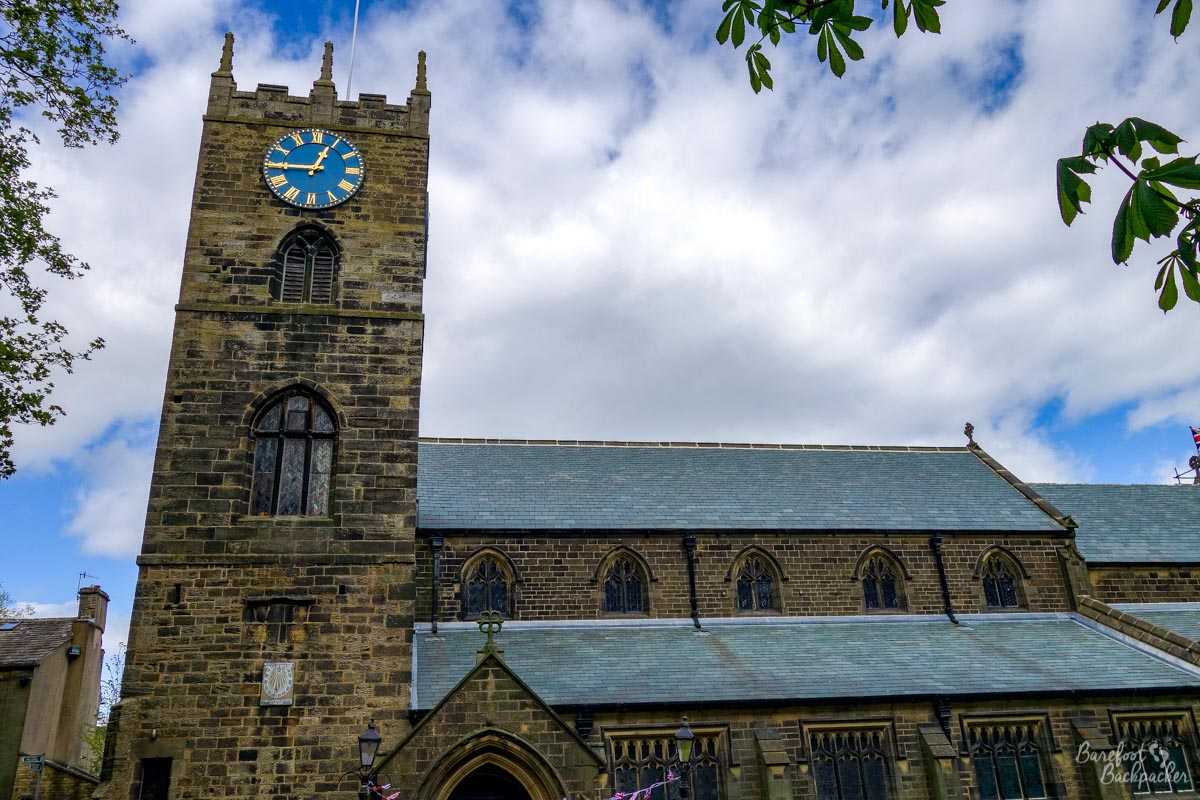 Haworth’s church, a small place in need of renovation.

Haworth is one such place. It’s built in the valley of the River Worth, originally a cotton-mill area but now very much geared towards tourism; the main street is now a cobblestone road, one of the steepest high streets I’ve ever walked up, lined with period buildings, cafés, and souvenir shops. Although it hosts ‘period’ weekends throughout the year, where the whole town dresses up in costume, it’s most famous claim to fame is being at the heart of Brontë country; Haworth being where the Brontë sisters wrote most of their works – indeed the novel Wuthering Heights is very much based near the village. 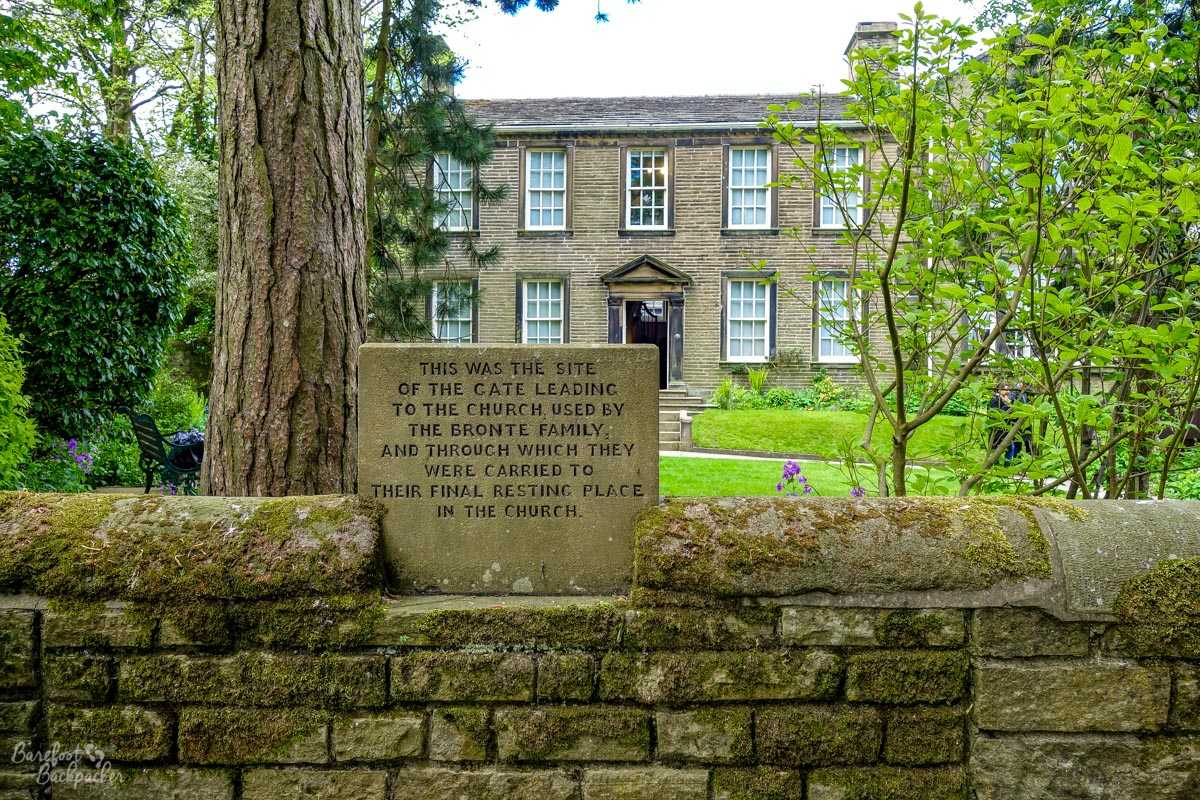 The parsonage where they lived is now home to a (little overpriced) museum, which includes the very desk that Charlotte Brontë at least wrote her novels on. In the nearby churchyard are graves relating to the Brontë family, whilst in the church itself (St Michael & All Angels) is a small memorial chapel to the sisters who are buried in a vault underneath. Except Ann, who’s buried by the sea in Scarborough. 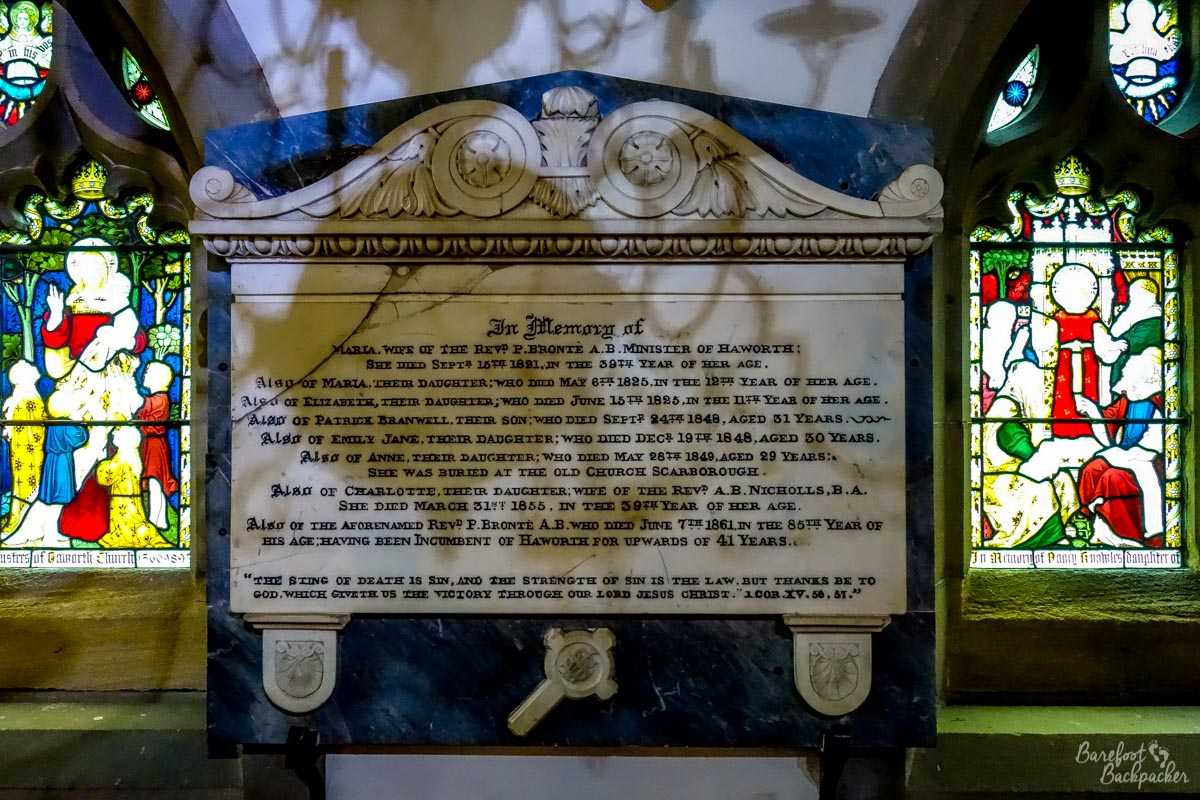 The plaque in Haworth church commemorating the Brontë family, on the wall above their burial vault.

A little further South, after a bus ride over the wild moorland for the best part of an hour, lie the towns of Hebden Bridge and Heptonstall. The former is a quirky town with a spiritual, neo-hippy bent, likened to places like Glastonbury and Salem; it’s also noted as having the highest proportion of lesbians in the country. I arrived right in the middle of a demonstration by a horde of Morris Dancers in the main square. It’s a lovely setting for a town; the Victorian stone buildings contrast very neatly with the large green moors on all sides, while a river flows right through the centre. This does have its disadvantages – the centre has been flooded a couple of times in the last few years. 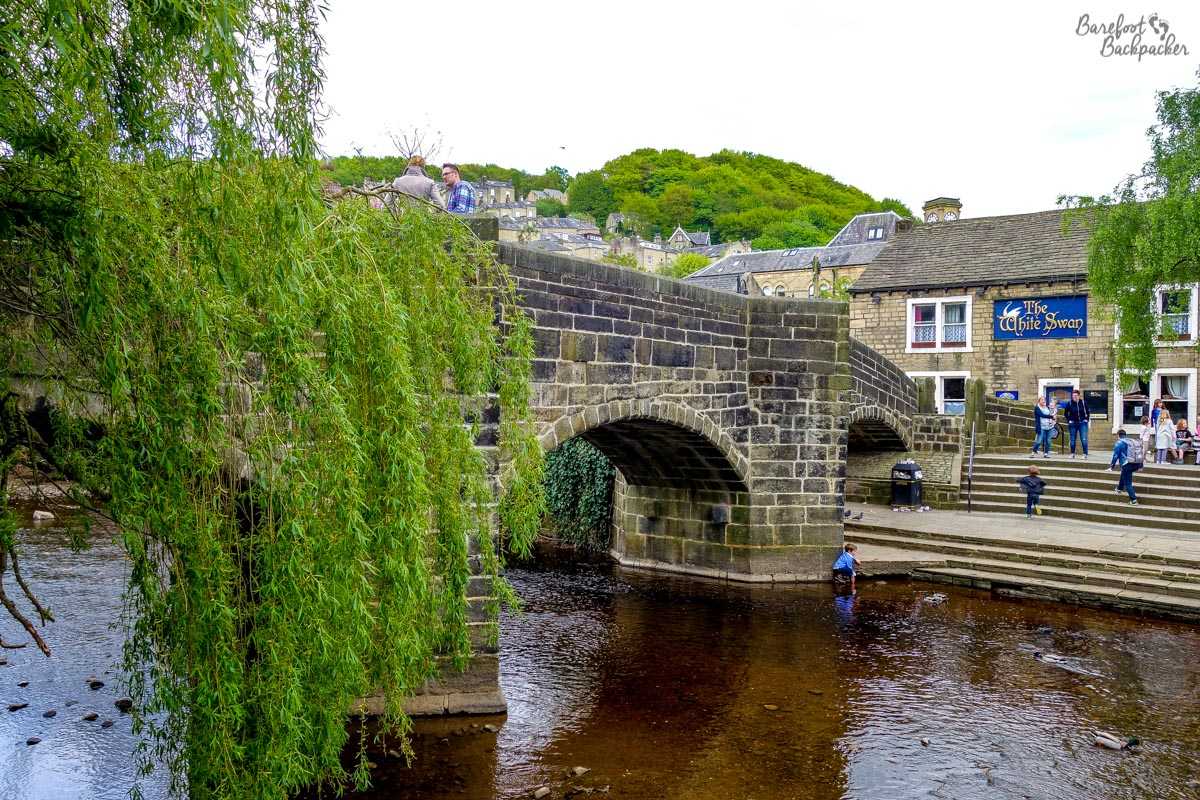 The old footbridge and main square of Hebden Bridge. 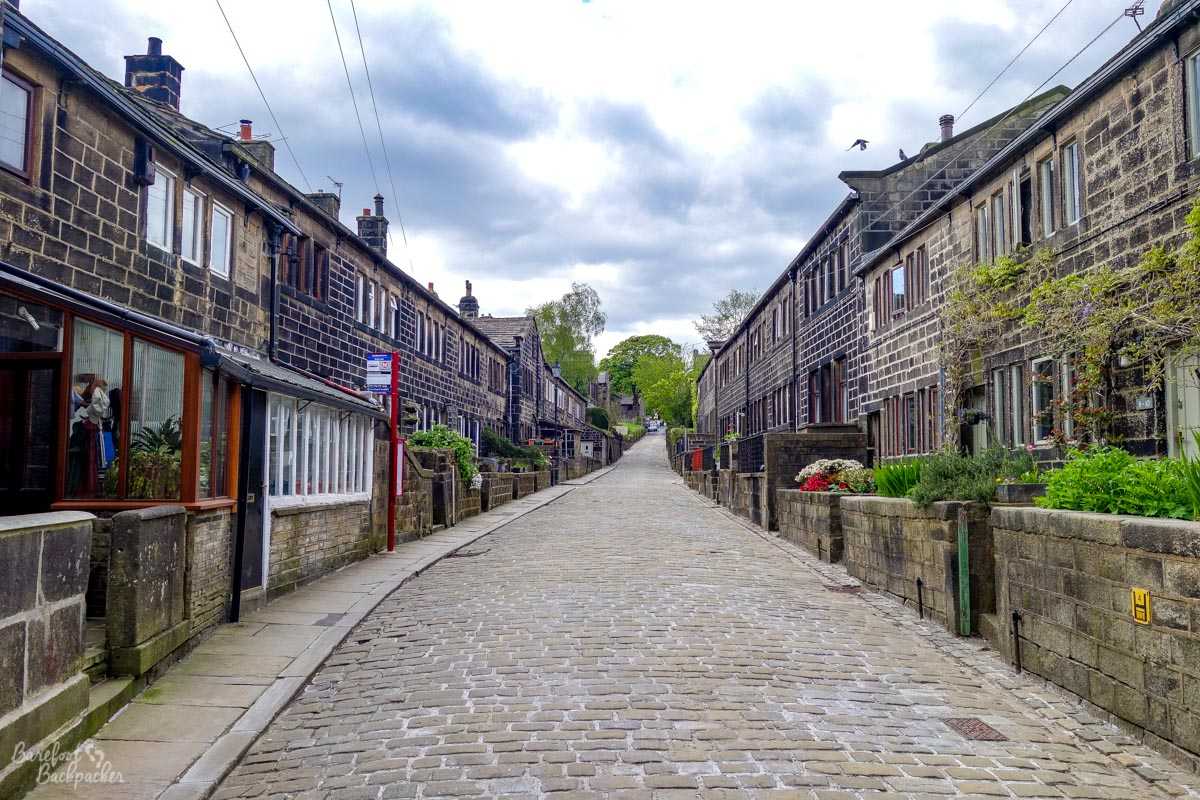 The main street in the village of Heptonstall – the cobbled road is there because the residents wanted it to stay that way.

Heptonstall is a truly life-shortening mile walk up a hill the likes of which shouldn’t be seen outside of Alpine skiing. It’s a very small village, consisting of a series of cobbled streets, a couple of pubs, and two churches in the same churchyard – one of the very few examples where this occurs. The old church was destroyed by the elements in the 19th century and only the walls remain – it is still considered consecrated ground however so could be used for valid al-fresco religious ceremonies. One of the people buried here is ‘King’ David Hartley, leader of the Cragg Vale Coiners, a tale told elsewhere. 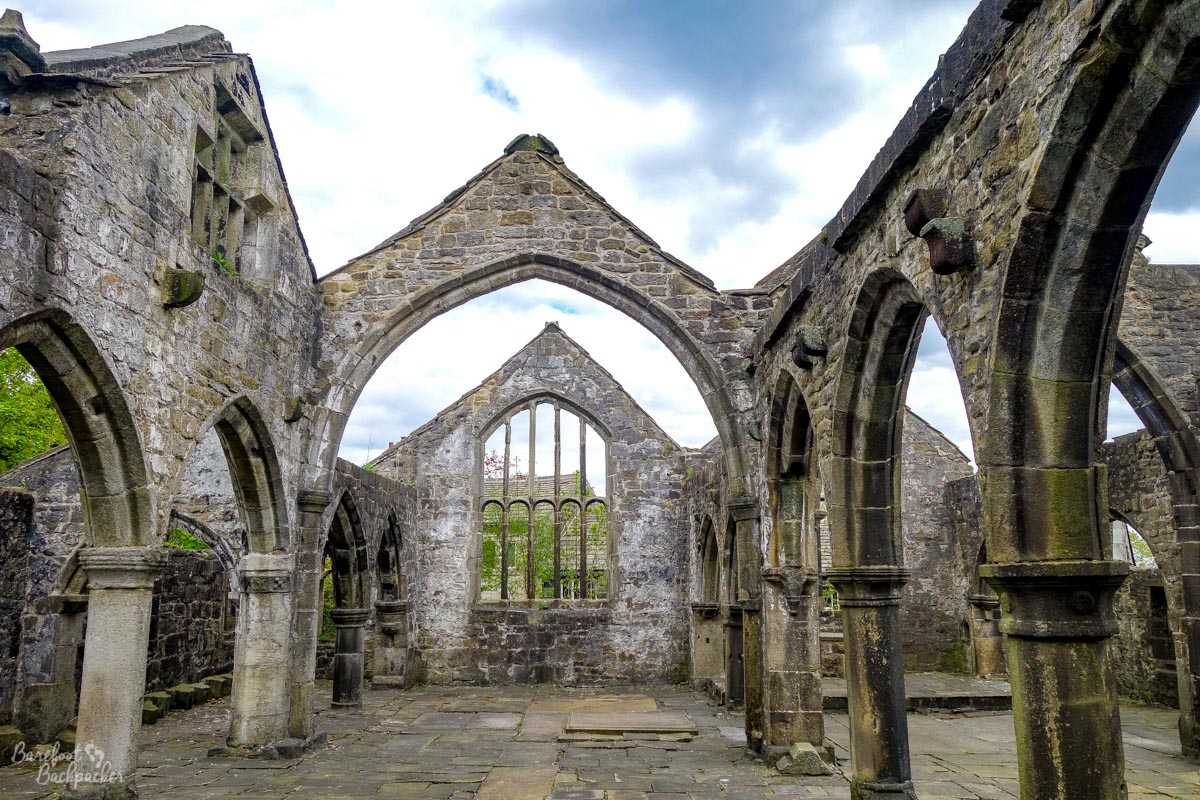 Inside the old ruined church in Heptonstall. 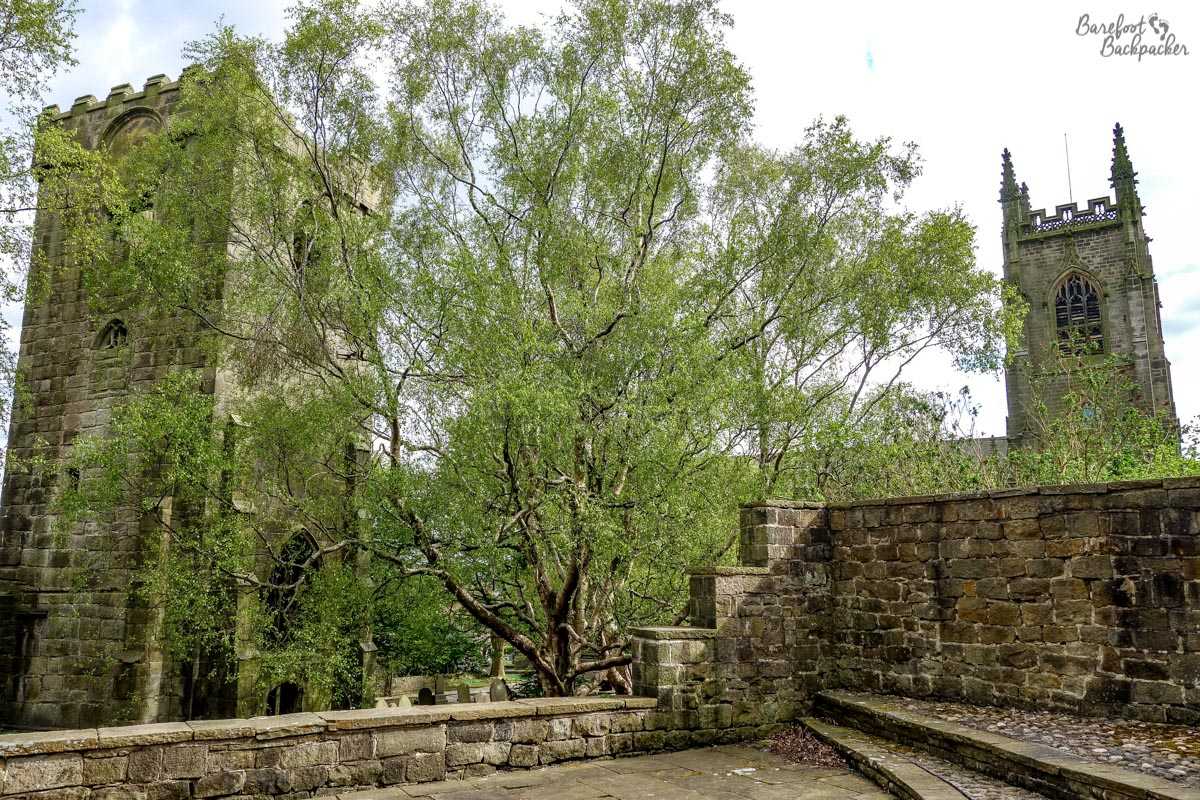 Overview of the two church towers in Hepstonstall; the old one on the left, the new one on the right.

Continuing the literary theme though, the churchyard is the final resting place of a more modern writer; the grave of the American poet Sylvia Plath lies in the new graveyard on the opposite side of the church to the ruined church. While this might seem like an odd place for her to lie, remember that she was once married to British poet Ted Hughes, who lived in nearby Mytholmroyd, and it was he who designed her gravestone. It’s one of the more vandalised stones in the UK, as there appears to be a whole anti-Hughes fanbase who don’t want her grave to be ‘sullied’ by his hand. Uhm. 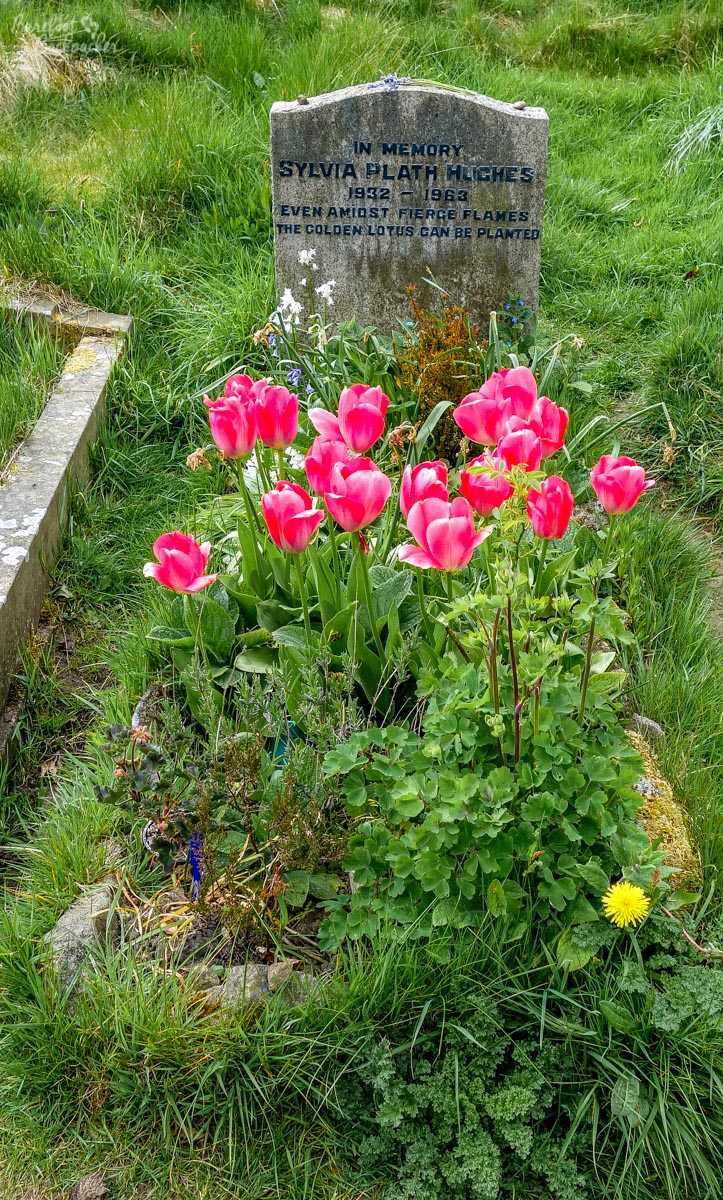 Sylvia Plath’s gravestone. Poster-girl for misunderstood and despressed poets since 1963. 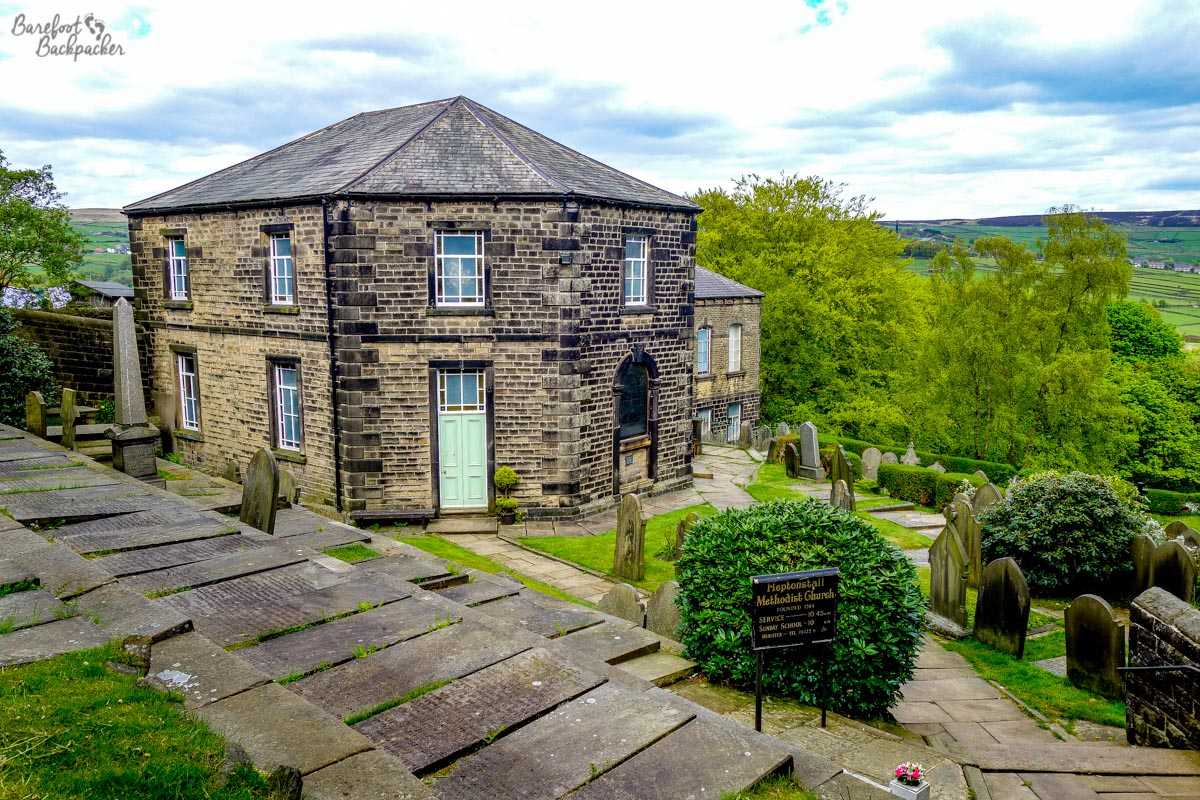 Also in the village is one of the oldest Methodist chapels still in operation, built in 1764 partly by the hand of John Wesley himself. It’s notable in that it has a distinctive shape – it’s octagonal rather than rectangular / square – apparently because he didn’t want it to look like a normal church so as not to upset the Church of England. 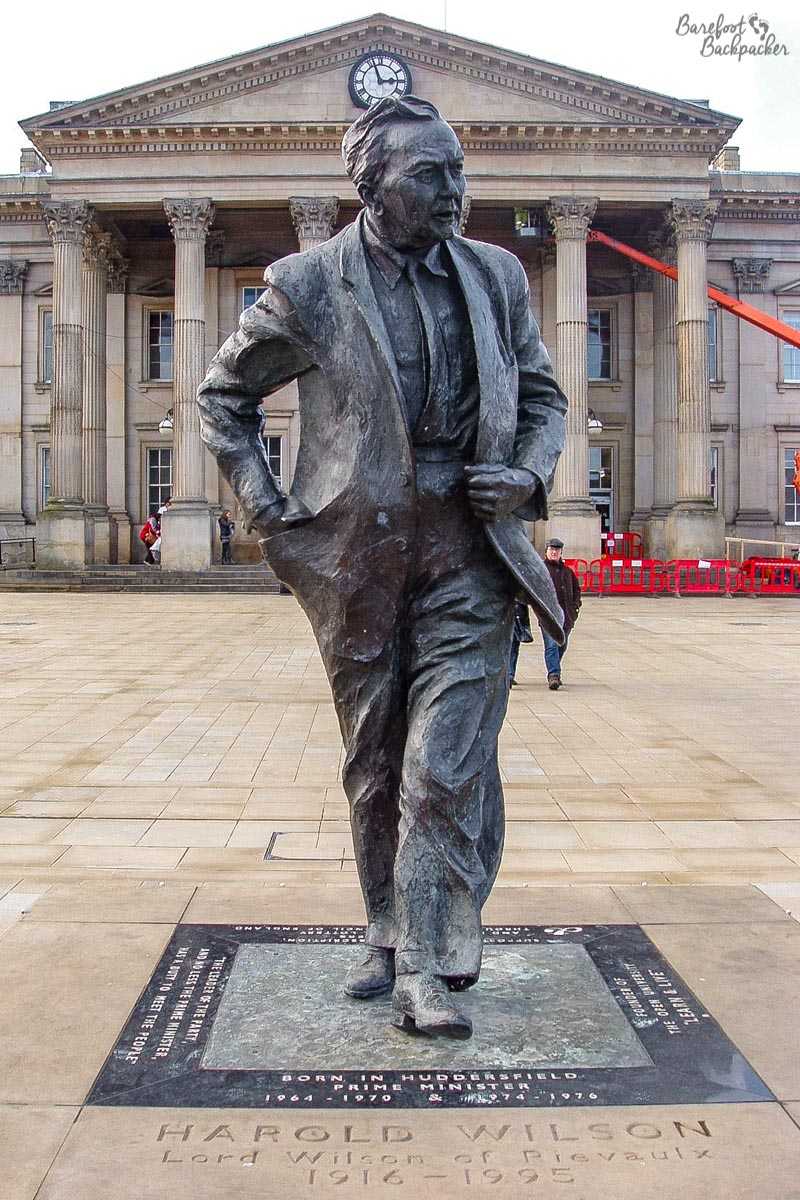 Statue of 1960s Prime Minister Harold Wilson in his home town of Huddersfield.

Some way further South, beyond Huddersfield (a large market town with, I have to say, not much of interest to me aside from a small local museum, a statue of a relatively well-regarded Prime Minister – Labour, obviously -, and a collection of very nice pubs) and heading into the Peak District side of the borough of Kirklees, is the town of Holmfirth. The way I thought of it was like a slightly less attractive version of Hebden Bridge – the same kind of picturesque market town in the hills, with the same style of stone buildings and open streets, but for some reason I just preferred Hebden Bridge. 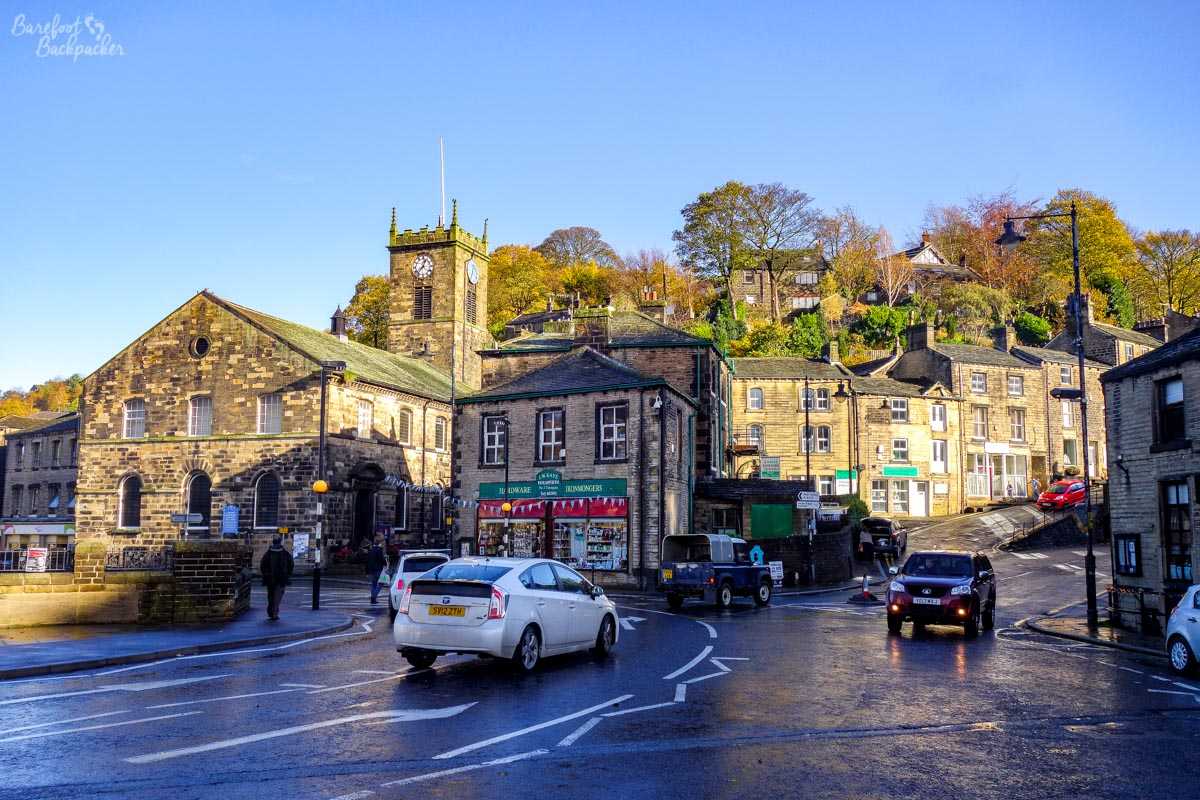 The lovely old-stone buildings in Holmfirth.

Holmfirth is, of course, most famous as being the setting for long-running TV sitcom (and I use the word advisedly) “Last of the Summer Wine”. In essence, the programme *is* Yorkshire, or at least a particular version of it – the scenery, the bloody-minded old men, the caps – but the town itself doesn’t really feel like it bears out the stereotype. Indeed, apart from the town itself, you have to look quite hard before finding any reference to the programme anywhere within. I’d feared it would be a ‘tourist trap’ with horrendous amounts of memorabilia and souvenirs, but in reality there were very little of either – rather the town seems to market itself very much more on the ‘quaint traditional moorland market town’ vibe. 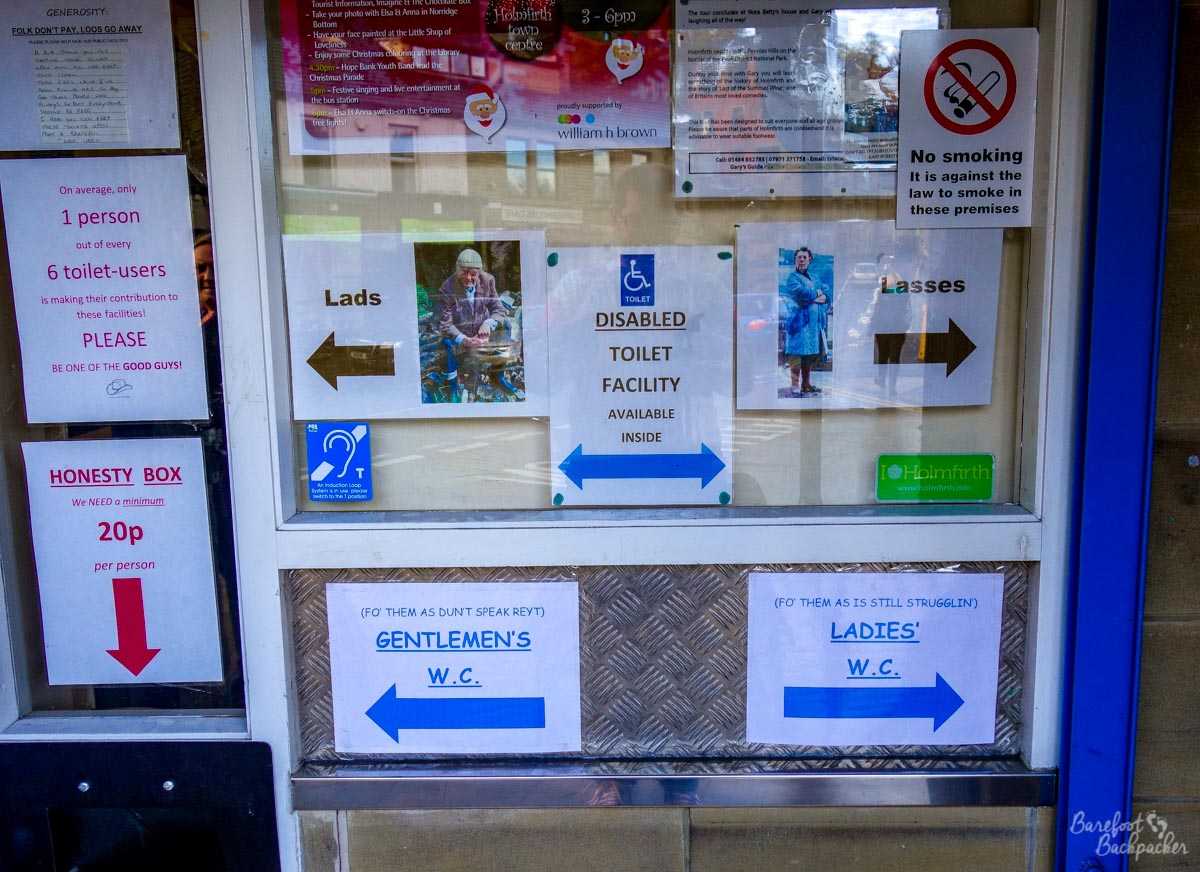 The roads out of Holmfirth are incredibly beautiful, but the weather closes in very quickly and it only takes a few minutes of snow to pretty much cut off the town – just be wary of visiting in Winter.

Authorities visited: Bradford, Calderdale, Kirklees. Dates visited: Mostly 14 May 2016, except Holmfirth (7 November 2015), and Huddersfield (10 March 2011).
Much of this post is also referenced on Episode 29 of my podcast, which also talks about the history of Ripon, a little further north.