As already noted, Haworth is most famous for the Brontës. However, on my visit there, they were a mere side-note – the whole village was projecting itself almost exactly 100 years later. It seems that throughout the year, Haworth hosts several ‘weekend events’ dedicated to a particular subculture – November sees a Steampunk Weekend, while over summer it turns into hippie-ville with a weekend dedicated to all things 1960s. This time, however, it was the annual 1940s weekend.

Haworth stands on the Worth Valley Heritage Railway, so steam trains are relatively common; it definitely fitted with the mood of the day though!

They certainly went all-out with the theme; indeed the first thing I saw after stepping off the bus near the railway station was a competition to win a Spitfire fighter aeroplane (or at least a large-scale model thereof). The shuttle buses between the railway station and the heart of the village were period pieces too, in original colours and livery. To complete the mood, Haworth already stands on a heritage railway (the Keighley & Worth Valley Railway) which runs with steam trains, so for this weekend even more trains were put on, and the whole station was crowded. 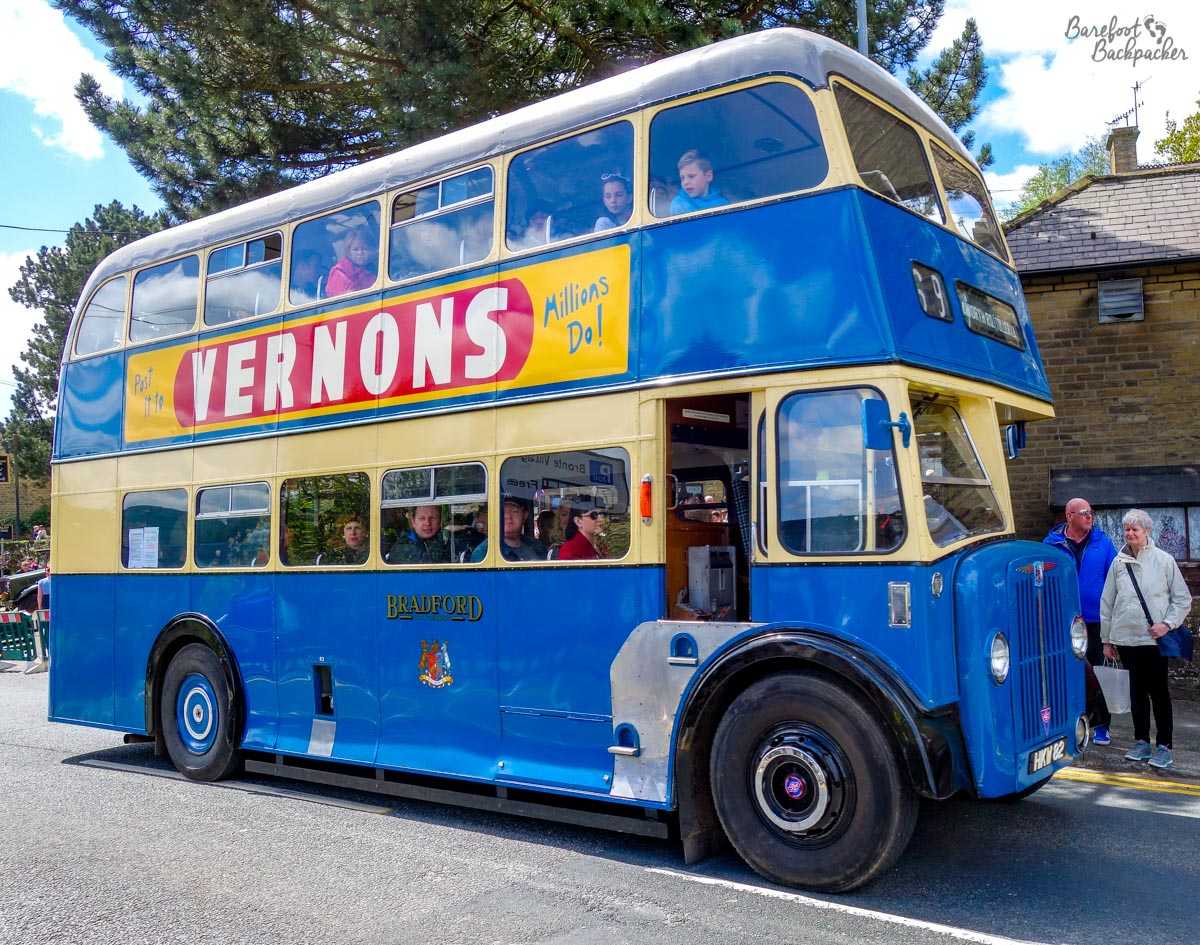 One of the buses ferrying people around the village. There was even a conductor on the far side. It’s presumably local; Haworth is, at least nowadays, within the boundaries of the borough of Bradford.

The main park was full of stalls selling period clothing, and displaying historical memorabilia, while in the centre was a large ‘entertainment tent’ where a chap was giving a rendition of a 1940s BBC radio announcer and entertainer, complete with the voice and the period songs. All around people were dressed up in costume, from Allied army uniforms to land girls to general 1940s fashions – there were even a couple of people dressed in German soldier uniform, one of whom told me they regularly attended these kind of events and tended to be by far the most photographed people of all. Other entertainments included Lindy Hop in the bandstand, vintage cars, demonstrations of wartime weapons, and, although not scheduled while I was there, a series of parades and flypasts. 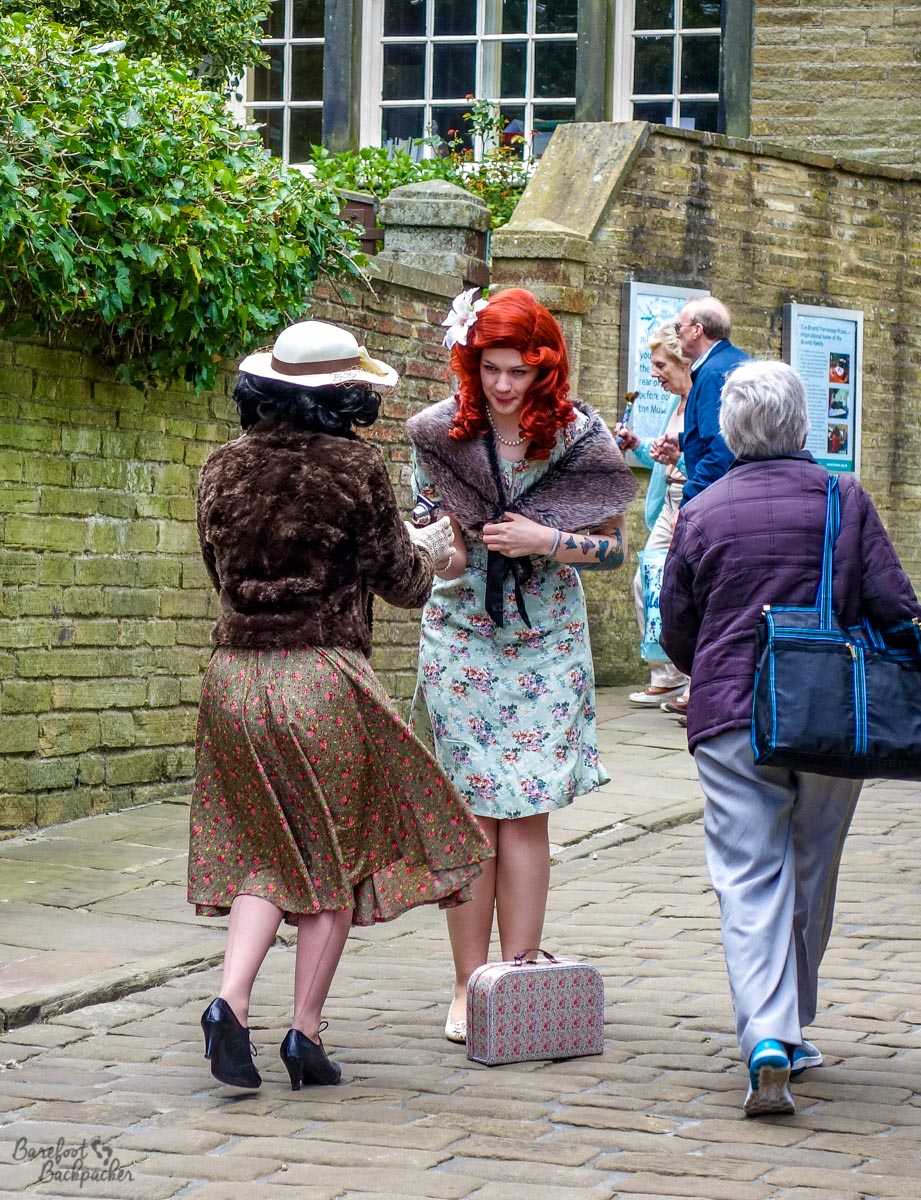 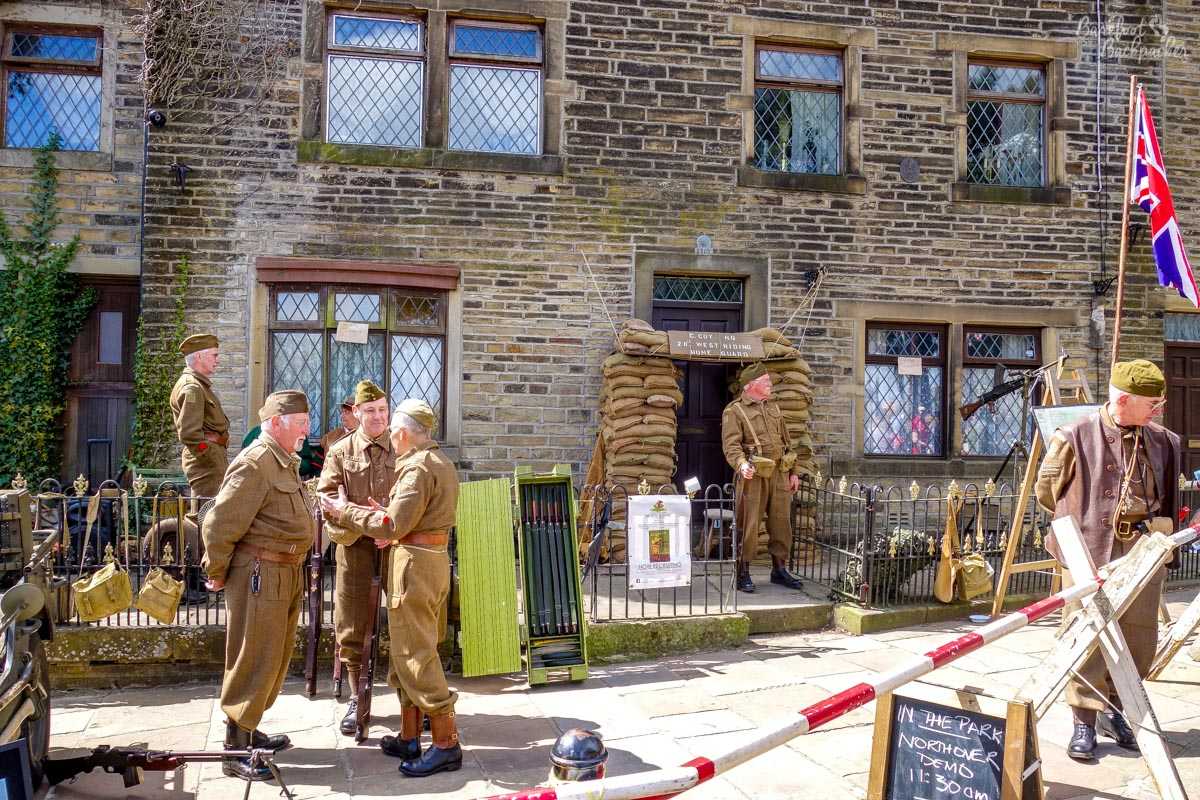 The Home Guard’s display. The first, best, and only line of defence against a German invasion …

At the far end of the village was a second, smaller, open space, nicknamed ‘RAF Haworth’ (normally just a car park) with a full-scale replica of a Spitfire and an entertainment stage where again 1940s singers performed, but additionally on my arrival I was greeted with the sight of King George VI, Winston Churchill, and Field Marshall Montgomery giving keynote speeches to the public – that is to say, lookalikes & soundalikes recreating the famous speeches they made in the day. In all honesty, I don’t think they got Churchill quite right, but he was someone I never really rated anyway. 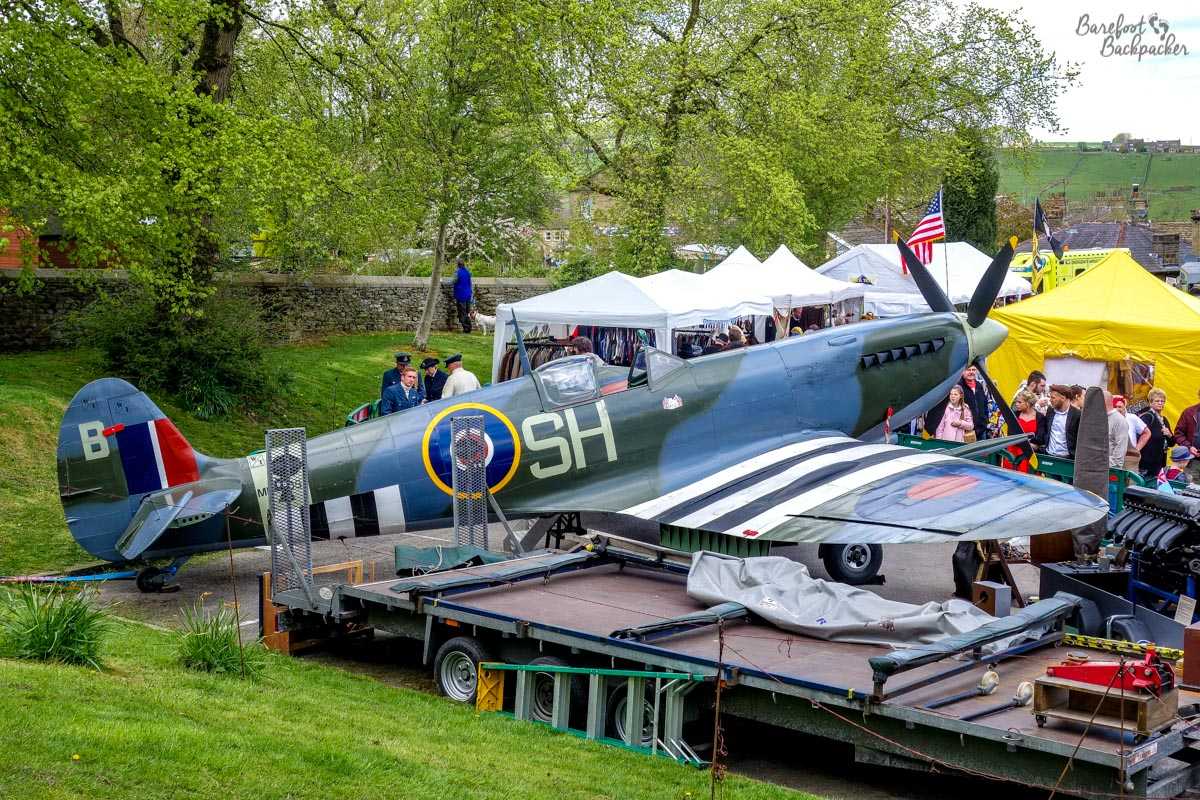 Replica spitfire. In front of it was a model of the Rolls-Royce engine used to power it. 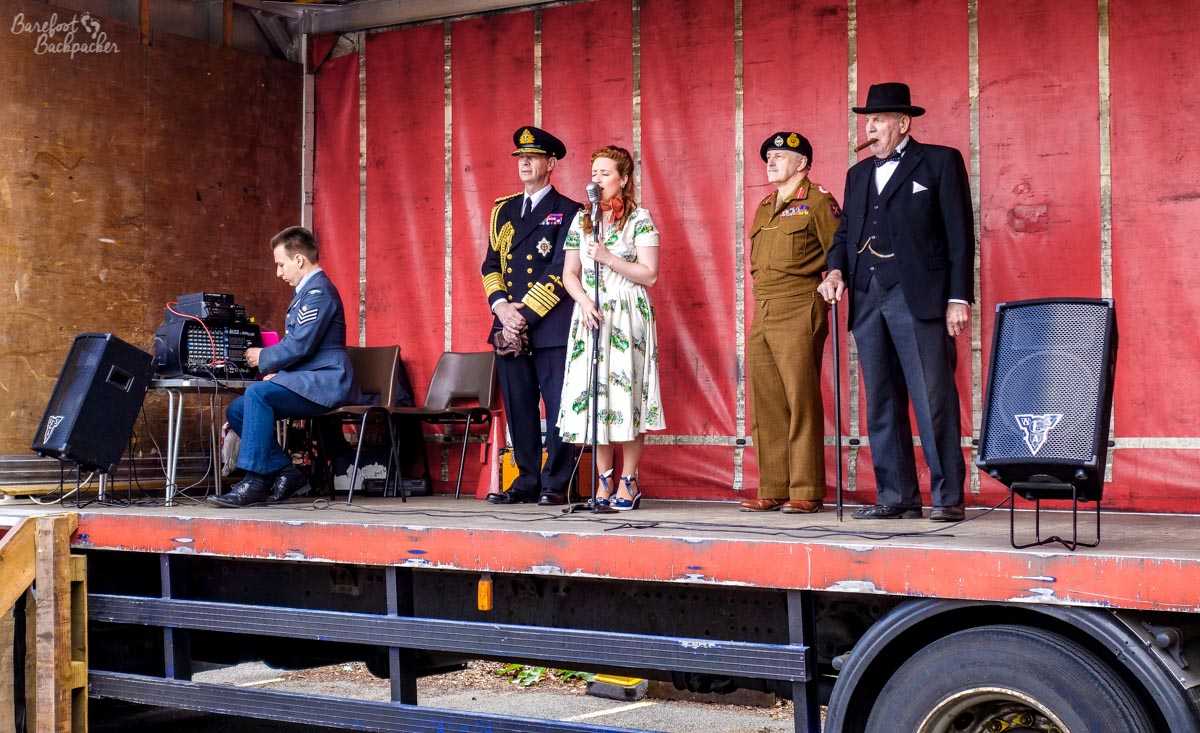 The King, the PM, and the head of the Army, with a 1940s entertainer and a radio operator in period uniform. They all got the crowd waving flags. #Jingo 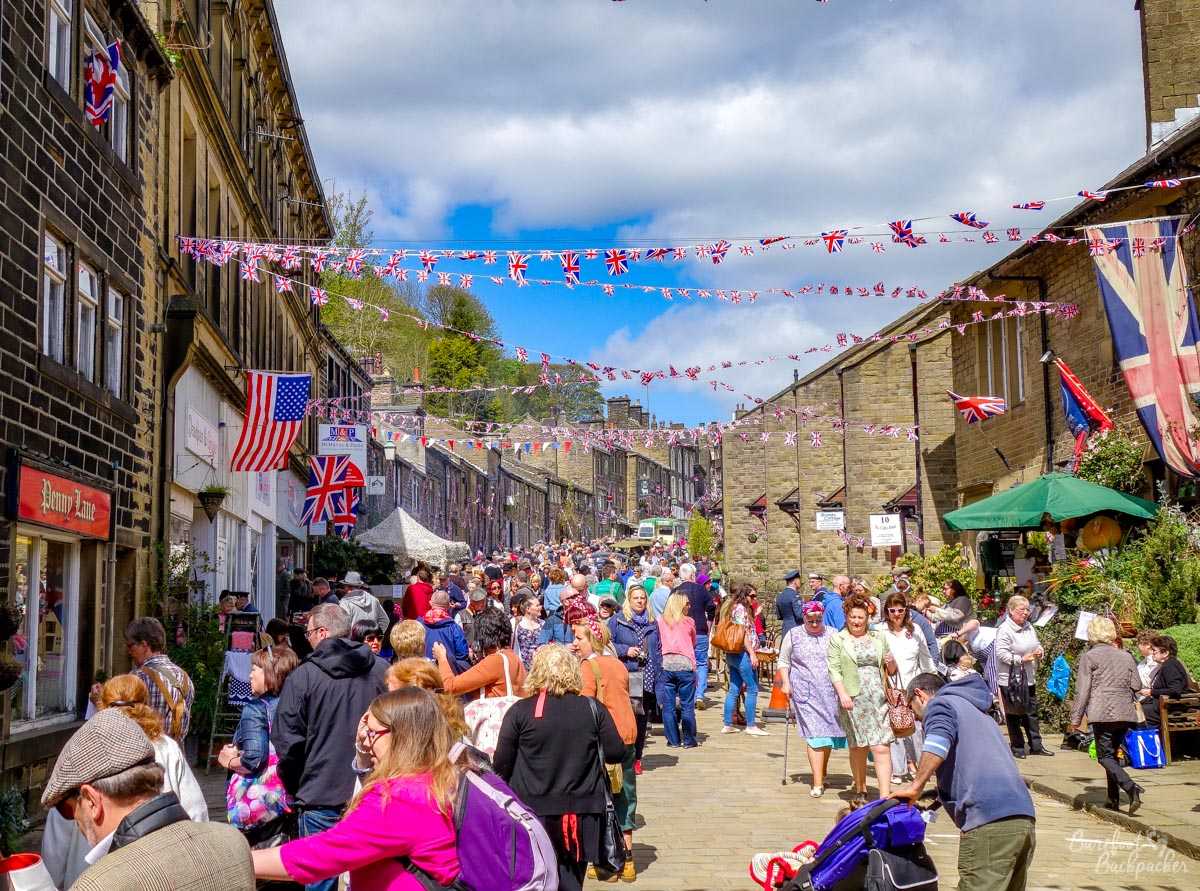 The day was incredibly popular; crowds, bunting, and entertainment even up the steep main street of the village. 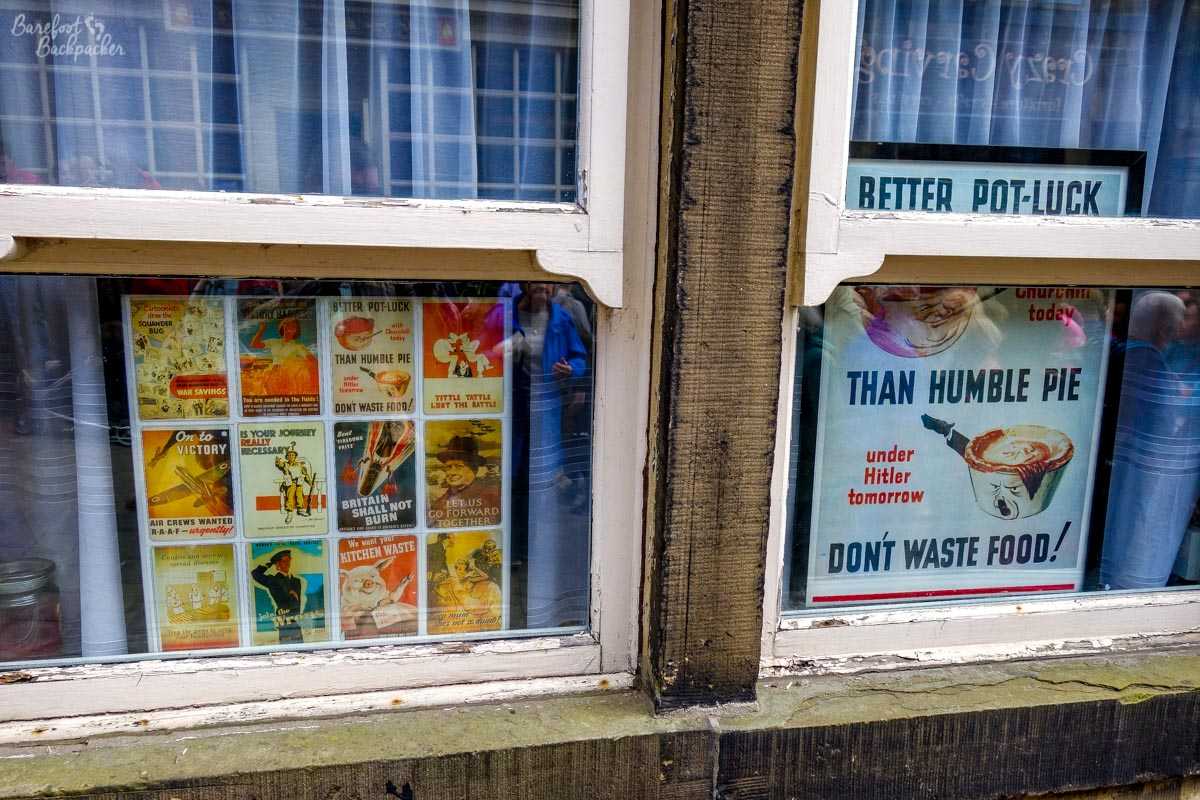 Selection of 1940s Public Information Adverts in a house’s window on the main street.

The place was absolutely crowded, so it’s evidently very popular, but definitely worth a couple of hours next time. All the cafés and bars put on 1940s menus and the staff wear period costumes too, so it has the potential to fall into cheesy ‘Allo Allo’ territory, but I didn’t feel it quite did. One wonders what the Brontë sisters would have made of it all …

The Treaty of Haworth was signed late in the war, after a prolonged game of ‘swapsies’.

Authorities visited: Bradford. Date visited: 14 May 2016.
I talk about this area more on episode 29 of my podcast, including more about Haworth’s literary history, the Cragg Vale Coin Forgers, and 1,400 years of the city of Ripon.

One thought on “Don’t You Know There’s A War On?”