“I heard the coiners took the scissor to the Union Jack, with a snipper and a clipper and a bloody close shave making fivers, tenners, twenties, change.”

History is such a wide-reaching subject, but at school (certainly in the UK) we’re only really taught the mundane stuff – the Kings & Queens, life in Roman / Saxon / Norman / Elizabethan England, the Industrial Revolution in a general sense, and World War 1. And World War 2 of course; this *is* England, after all. It’s more amazing to hear what we don’t learn – neither the Wars of the Roses nor the three English/British Civil Wars of the 1600s, not really much about colonialism (indeed, almost nothing outside Europe, even if we were directly involved – I learned more about the War of 1812 after one day in Quebec City than I ever learned at school), and certainly very little about everyday life, the occasional peasants revolt aside. The childrens’ TV series ‘Horrible Histories’ fills in a few gaps, but sometimes you end up learning about odd titbits from completely random sources. 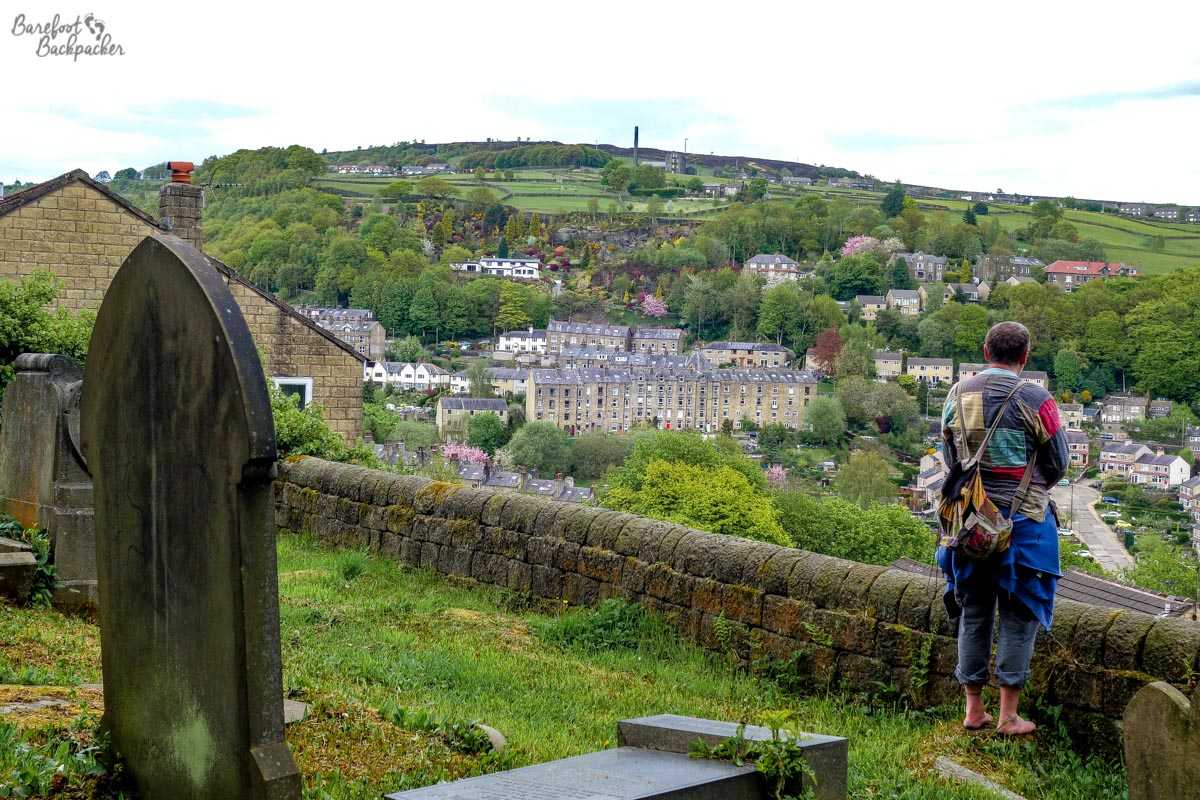 And so it is with the Cragg Vale Coiners, whose existence I only learned about through a song by the Yorkshire-based anarchist indie punk rock band Chumbawamba – ‘Snip Snip Snip’ from the album ‘Shhh!’ is an aggressive rock-rap summarising the background to the gang, although it doesn’t go into their demise. Although a minor footnote in the history of Yorkshire, I figured if it was interesting enough to write a song about (albeit Chumbawamba being a slightly biased source, given their standpoint would be aligned very much with the coiners), it would be interesting enough to blog about, especially as I was in the area.

The Cragg Vale itself is a small valley in the hills just south of Mytholmroyd, and is pretty isolated even today, so back in the 1760s it’s likely that the area was lightly policed and very little known about it on an everyday basis, although the coiners themselves operated at least as far as nearby Hebden Bridge, in the Calder Valley. Although supported by many both then and now due to their cocking a snook at the establishment, and seen as ‘jolly rogues’ (in much the same way as people like Dick Turpin), in simple terms what the coiners were doing was very definitely illegal – hacking bits off the edges of coins (enough to get a good sliver of metal but not enough as to make the original coin noticeably worthless), then melting the scraps and reforming them into new coins, essentially therefore literally ‘making money’ in its proper sense. It needs to be remembered of course that in those days, the coins used as money were actually worth something – made of silver rather than a cheap alloy – so were easy to work as well as being of intrinsic value in and of itself. 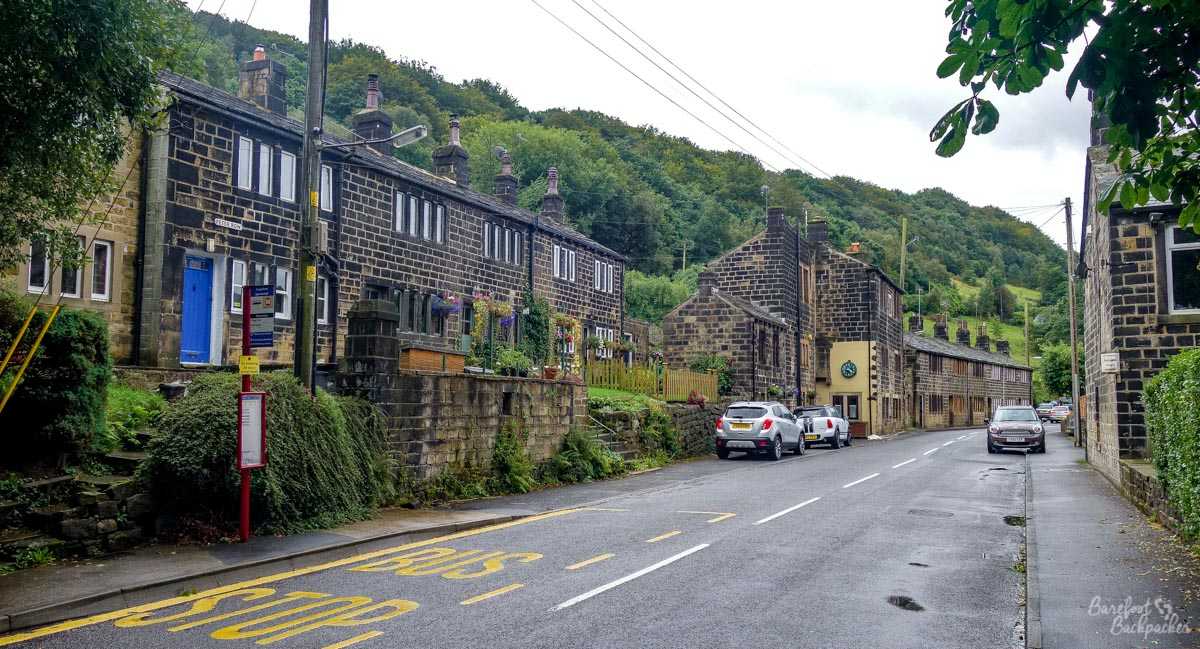 The road through the Cragg Vale, near the Robin Hood Inn – unfortunately too recent (c.1800) to have been one of the coiners’ haunts.

It was a particularly good spot for such activity. The main road through the Calder Valley to the North was an important trade route across the South Pennines/North Dales, linking the towns of West Yorkshire like Halifax and Huddersfield with Lancashire towns like Bacup and Burnley, from which there would be easy access to the sea. However, off the main road the mountains were relatively high and remote, so the many valleys off the Calder would have been little-known and little-ventured; even today the Cragg Vale has only one road going through it – back in the days of the Coiners, it would have been incredibly quiet and hidden, and even if people were to come through, they would have been very easy to spot from a distance, making it a simple process to hide everything away in good time before they arrived.

The leader of the coiner gang was a chap called David Hartley, who had the nickname ‘King David’ (as the leader of such an influential and rich group, complete with their own power base, it’s not hard to see why); the exact number of coiners will probably never be known but by the end of the scheme, 30 people had been arrested across the whole Calder Valley area in suspicion of forgery, some from as far away as Sowerby and Halifax. Many of the local villagers, especially the publicans, were actively involved in other ways, including providing some of the original coins from which the forgers worked (with the promise of a small ‘return on investment’, of course). The beauty of forgery of course is that most people never check their coinage to see, and as long as someone is willing to accept them as payment, no suspicions are raised. (In a sense the only people to ‘lose out’ are the government – as they’re no longer in control of the money supply – and the very last person to handle the coin, as banks/officials will check). In addition, at the time the quality of the genuine coinage was quite poor anyway due to over-handling (it was quite ‘old’), and there was a reasonable amount of ‘foreign’ (or at least non-standard) coinage already in circulation that was accepted, so the Cragg Vale Coiners wouldn’t have needed to work too hard to create a coin that people would accept, never mind shave little bits off coins that were already accepted.

This isn’t just a tale of forgery (a crime in and of itself punishable by death in those days); it’s also a tale of murder, almost out of the pages of a children’s Victorian-era novel. Once the law got wind of what the coiners were up to, they despatched a law enforcement official (William Dighton) to do some research. Initially his investigations brought fruit – one of the coiners (a chap called James Broadbent) gave damning evidence in return for immunity from prosecution, and as a result, David Hartley was arrested. His brother Isaac didn’t take too kindly to this and arranged for William to meet an ‘unsightly end’; he offered a reward of £100 (a not insignificant sum in those days) for his murder, and two of the coiners (ambushed and shot him while he was in the nearby ‘local capital’ of Halifax. 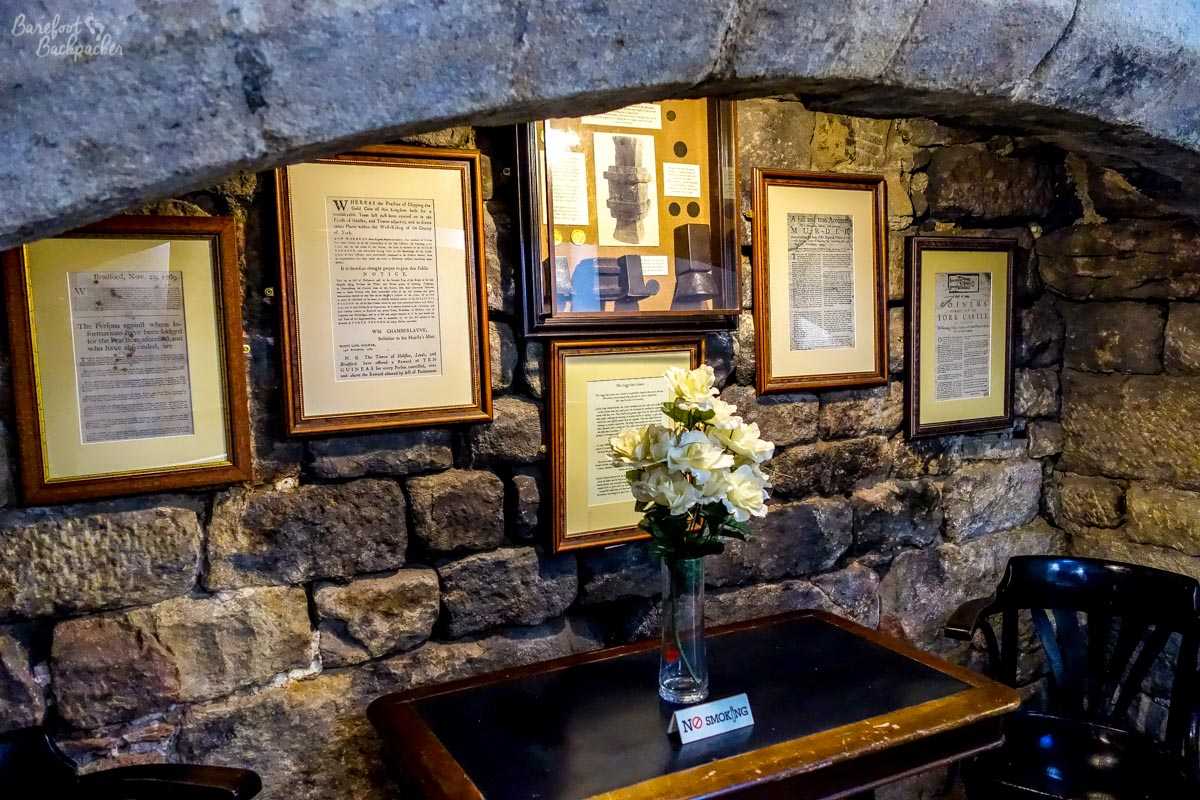 Overview of the Coiners’ activities, in the Cross Inn, Heptonstall. Allegedly on this spot a related murder was committed..

Ultimately, this proved a step too far for the law, who sent in what amounted to a small brigade led by an ex-Prime Minister, and promptly had the whole lot arrested. James himself was swiftly executed in York, and is now buried in nearby Heptonstall. The two coiner-murderers were eventually caught and subsequently hanged (one for the murder itself, the other for a separate charge of highway robbery). As for the other coiners, most of them seem to have been placed on what we might now term ‘on remand’ for a year until the following ‘assizes’ (court in session), but while many death sentences were handed out, they were only carried out in less than a handful of cases, and apart from a couple of deportations (to Africa, it seems), the matter seems to have been quietly dropped (according to the rolls, many of them were eventually acquitted – I assume that getting ‘King’ David Hartley had been enough to demoralise the whole group into submission). Oddly, Isaac was never brought to justice for his role in the murder of William Deighton due to a lack of evidence, presumably no-one would testify against him, and he died in Mytholmroyd many years later at the age of 75.

James Broadbent, the initial ‘grass’, seems to have escaped unscathed, although a couple of other locals/coiners thought close to the police were not so lucky; while not the ‘flame for your pants, poker for your eyes’ retribution mentioned in the Chumbawamba song, David Hartley’s gang did murder a couple of people who threatened to inform the authorities, including a coiner called ‘Abraham Ingham’ who boasted about knowing of the murder of William Deighton. 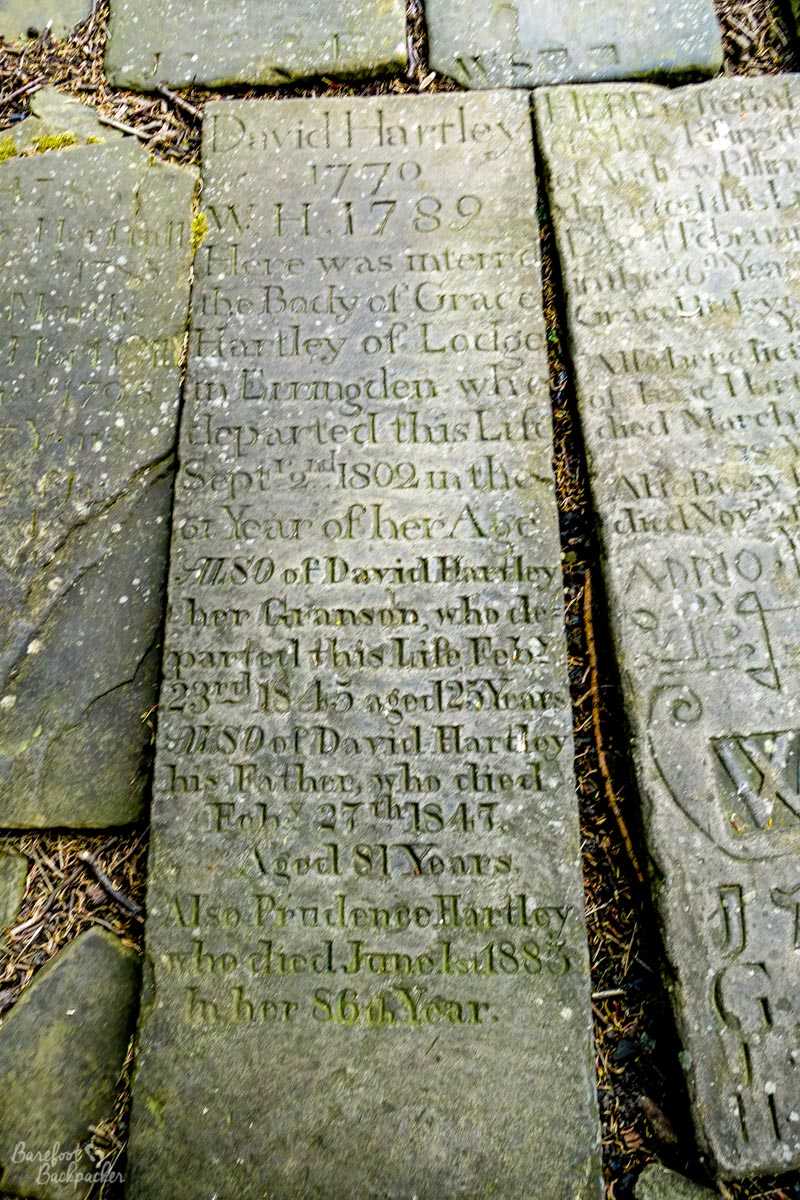 The grave of ‘King’ David Hartley, in the churchyard at Heptonstall. He died in 1770; more of his family was interred in the same grave later.

As to why the coiners operated in the first place; apart from being a remote area (and therefore likely slightly less affluent than places on the trading routes), the main industry in the area was weaving (mainly wool). Since prosperity depended on a single industry, any changes in the demand for woollen goods would have drastically affected life here, and at the time the wool industry was experiencing a ‘depression’ due to, amongst other things, world peace (English army uniforms were woollen at this time so there was less demand for army uniforms). Conversely, that it was so close to a trading route meant that access to a small but regular supply of coinage was guaranteed – but thus why they needed the help of the publicans to provide them.

Incidentally, although only active for a short period and in such a short area, they have left an important legacy – it is because of people like the Cragg Vale coiners that the UK £1 coin has a ridged edge …

Authorities visited: Calderdale. Date visited: 14 May 2016, aside from the pic of Cragg Vale taken 20 August 2016.
I also talk about this on Episode 29 of my Podcast, where I also mention the Yorkshire city of Ripon.