Most tourists to the UK visit the same places; London, Oxford, Canterbury, the Lake District, and, for some reason I’ve never understood, Stonehenge (it’s a pile of stones that costs you £15 to look vaguely at from 20 metres away whilst getting blown away by the wind). Those people who stay longer will often venture to places like the Cotswolds – rolling hills and picture-perfect English country towns that ooze a stereotypical image of the UK of being a ‘quaint’, ‘pretty’ place with village greens, country churches with ringing bells, and beautiful stone cottages. 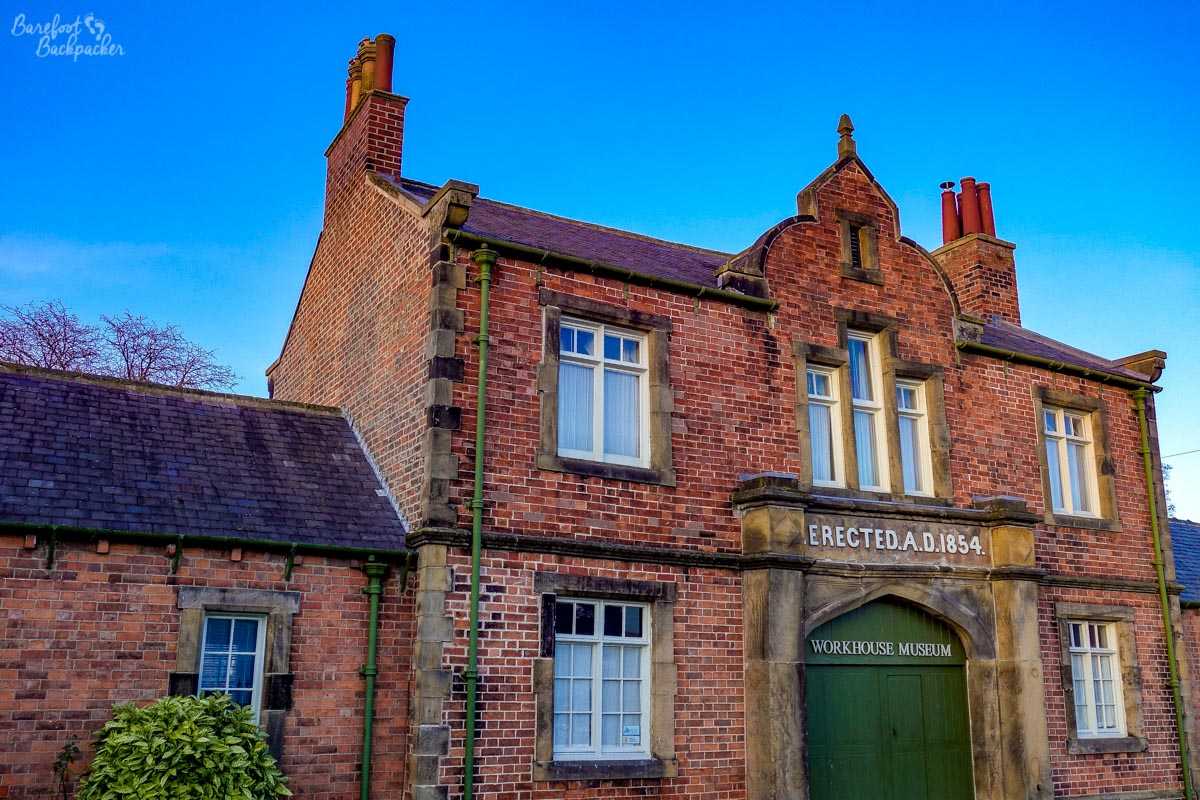 Typical building in Ripon. This is now used as the Workhouse Museum, which isn’t open very often.

Ripon is a bit like this. Except Ripon is in Yorkshire, far outside the normal tourist trails, which makes it one of those ‘hidden gems’ that tourist brochures and travel bloggers rave about. Even its proximity to the historical city of York doesn’t make it amongst the country’s ‘must sees’ – even those ‘in the know’ prefer the nearby spa town of Harrogate anyway, and make Ripon merely a place to pass through, and give it a cursory glance.

To be fair, it’s not very big. It’s the third smallest city in England by population (about 17,000 people – only Wells and London are smaller), and the sixth smallest in the UK. Remember the UK has a particular definition of a ‘city’ – a town or borough granted a city charter by the monarch (and not that it has a cathedral – though the two were often granted at the same time in the past, giving rise to the myth). 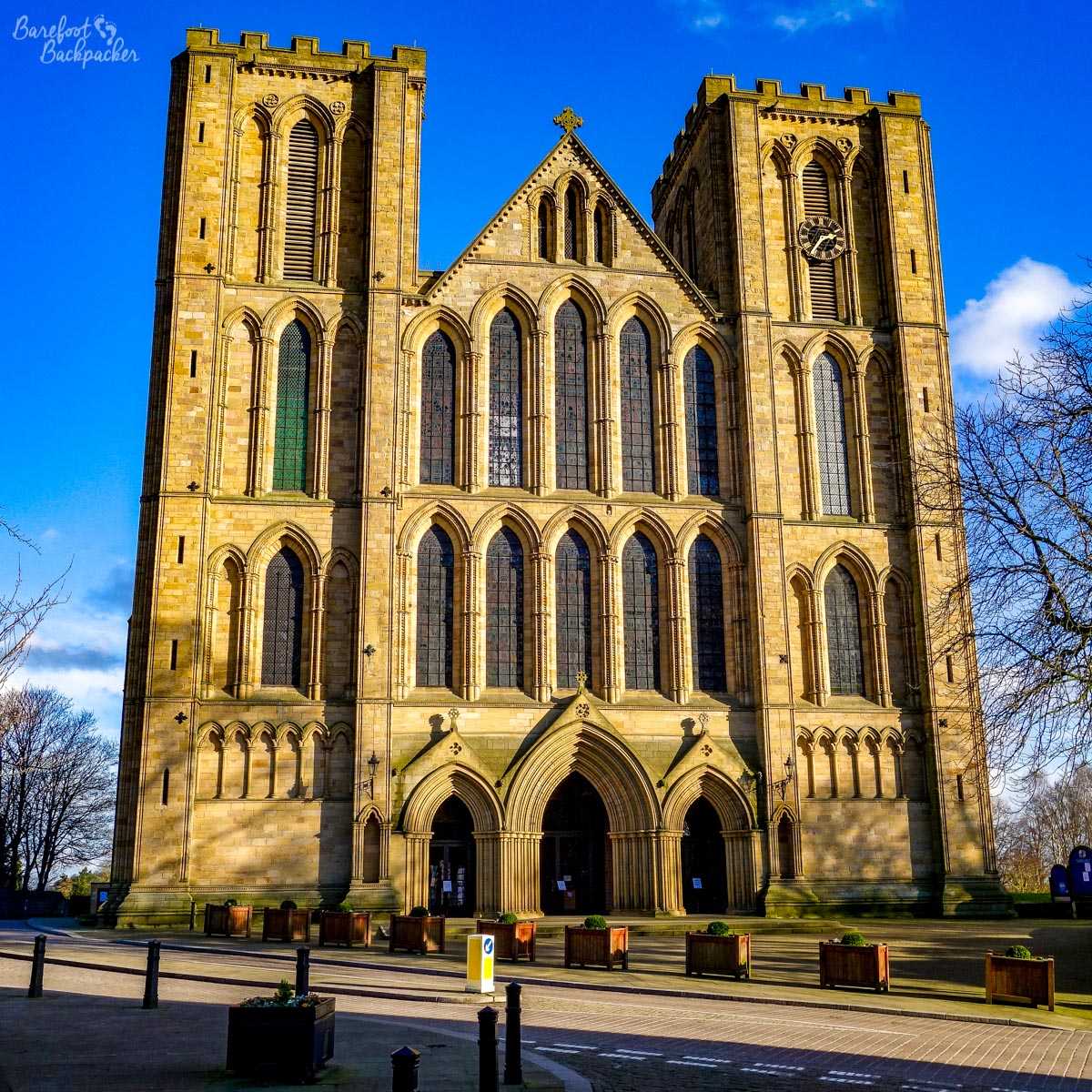 The outside view of Ripon Cathedral.

Having said which, Ripon *does* have a cathedral. There’s been a church on the site since maybe Roman times; the first stone building (primarily a monastery) being constructed in 672 by Bishop Wilfred, who was one of the leading bishops in the British Isles at the time, although this often brought him into conflict with the local political rulers. After death he was made into a saint anyway (amazing how many saints were also anti-authority), and buried inside this church which was then dedicated to him. The current building dates mainly from the early 1500s after much restoration work (the tower collapsed in the 1450s following, unusually, an earthquake!). It was finally established as a cathedral in the 1830s; the first dedication in England for 300 years. 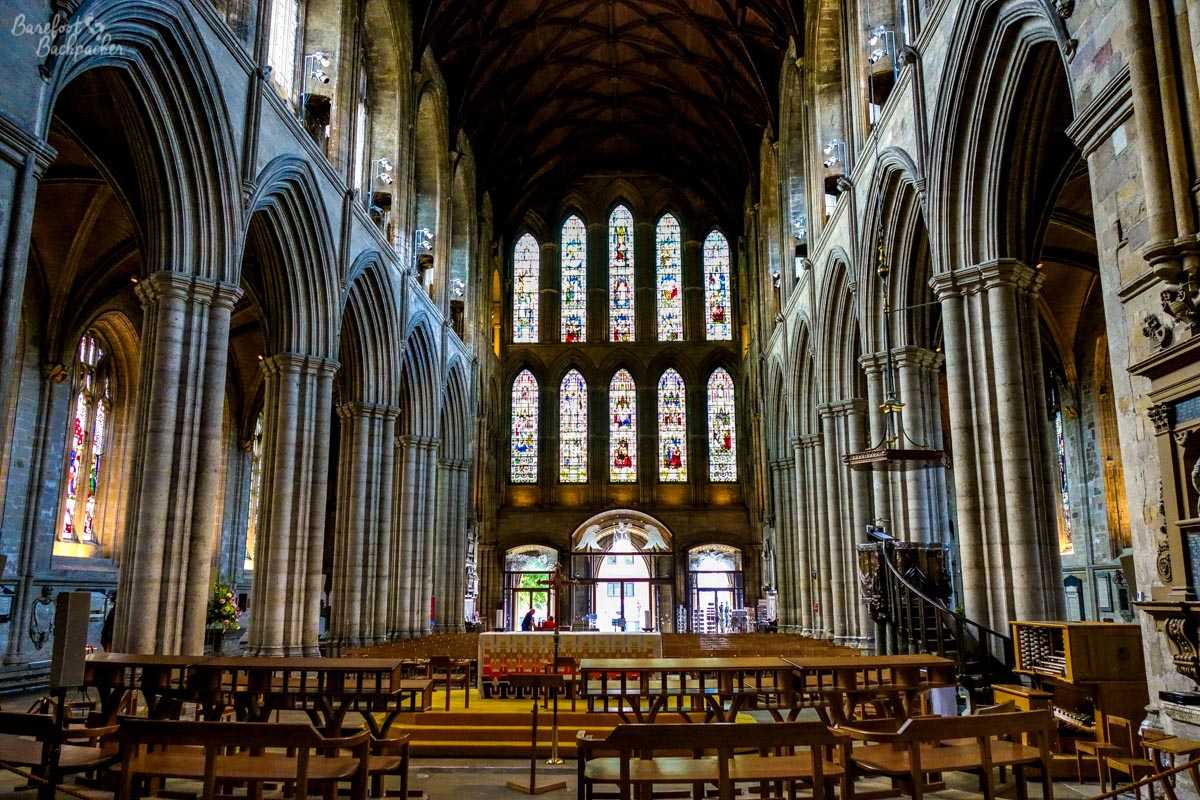 The inside view of Ripon Cathedral.

One of the more notable things about the cathedral are the misericords (I love that word!). These are carvings underneath the wooden seats in churches that provide support (lit. ‘mercy’) for people when praying. Although some depict religious scenes, they’re often secular (depicting mythological creatures), and tend to be quite ‘over the top’ – in a way similar to gargoyles. What makes Ripon’s more notable than others is firstly that they’re amongst the few whose creators are known with any certainty (the Bromflet family workshop), and because that they were said to have inspired a later children’s fantasy author for their stories … 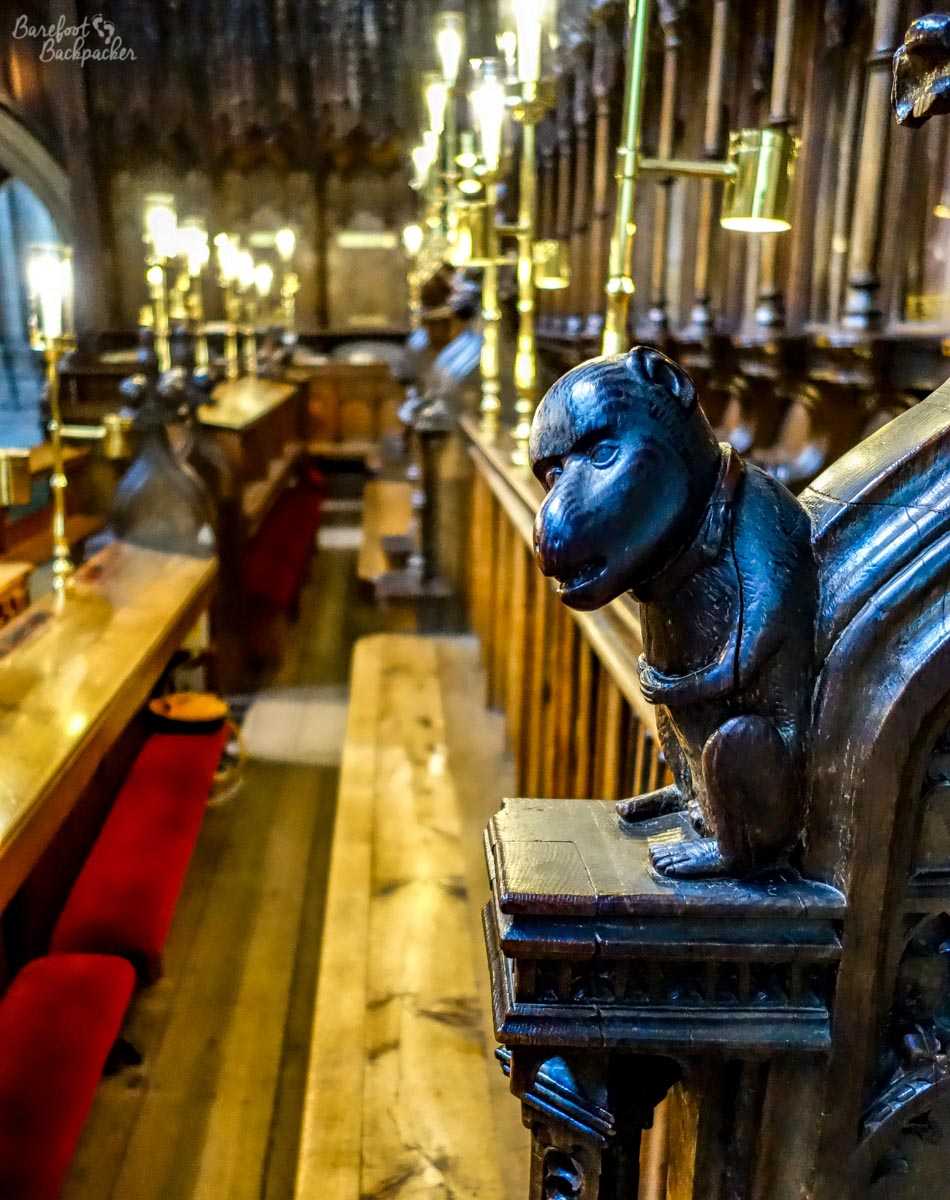 Close-up view of the ornamentation inside the cathedral. These sculptures often acted as ‘signposts’ showing where certain local dignitaries sat. 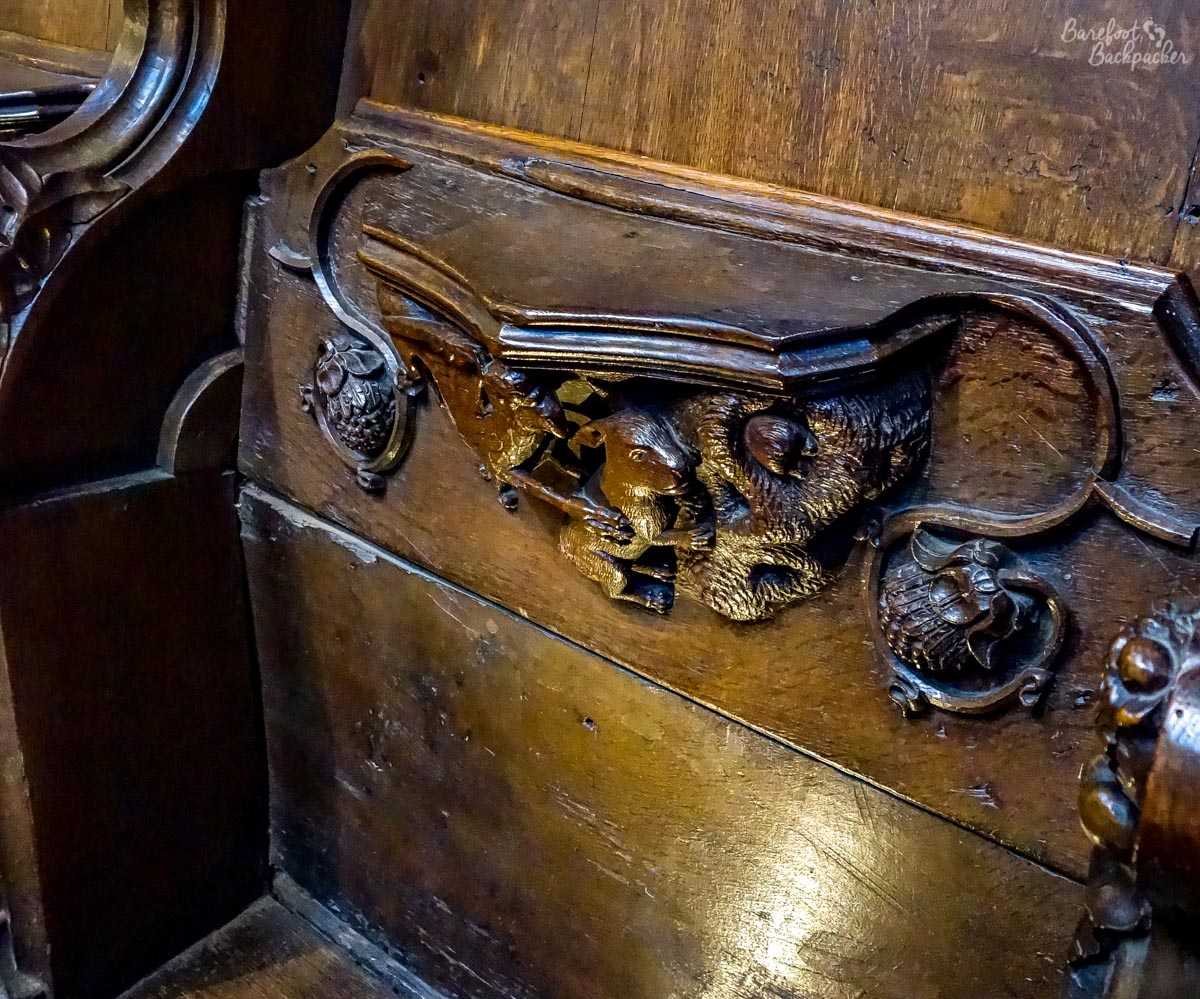 Close-up view of one of the misericords inside the cathedral, complete with fantasy-looking beasts!

These stories are themselves commemorated in the local branch of the Wetherspoons pub chain. In general, Wetherspoons often make use of local history or connections to locally-famous people, and this is no exception – this one being called ‘The Unicorn’.

Obviously, there have never been unicorns in Ripon. However, for 14 years in the second half of the 19th Century, the canon of Ripon cathedral (and Archdeacon of Richmond, an associated post) was a chap called Charles Dodgson, a scholar, author, and philanthropist whose main claim to fame these days is (possibly to his chagrin) being the father of the same-named author better known as Lewis Carroll. Carroll would have been in his 20s at the time and when visiting, often stayed at the building that has since become the Unicorn pub (in fact you can still stay here today – it’s now a Wetherspoons Lodge). It’s said that he took inspiration for some of the characters in his books from those cathedral misericords. 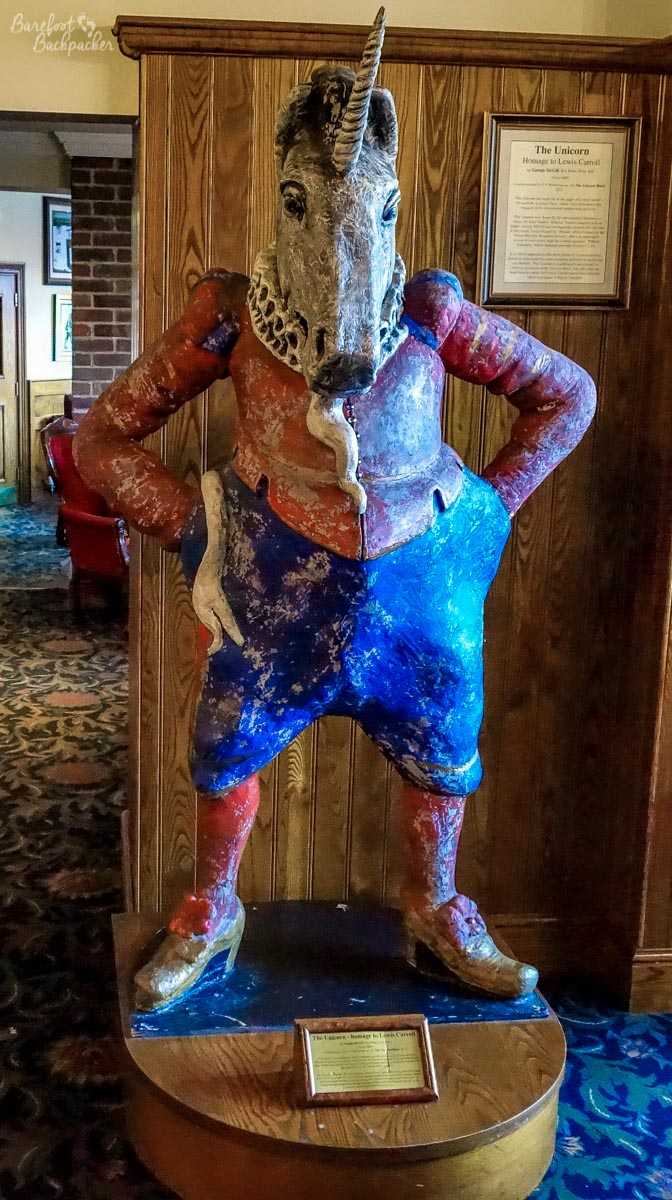 The Unicorn, inside the Unicorn pub.

In the pub is a sculpture (created by George McGill and based on the original drawings by John Tenniel) of the eponymous ‘unicorn’. He’s one of the most iconic characters in the tale of Alice Through The Looking Glass, and is supposed to have been Carroll’s idea of satire – the battle between the Unicorn and the Lion in the book is allegedly a metaphor for the bickering between the two dominant politicians of the day; the Unicorn was the Conservative Benjamin Disraeli whilst the Lion was the Liberal William Gladstone (a similar style being in evident in more recent times with Spitting Image in the UK in the 80s/90s, and Les Guignols in France in the 90s/00s).

Aside from its ecclesiastical and literary history, Ripon is historically notable in its own right, although it never seems to have been that large. It was originally founded in the mid 600s AD, and there’s been a market here since the early 1100s.

An attempt at a panoramic shot of Ripon’s Market Square.

In the market square is a large obelisk, with a horn on top. It’s around 27m tall & was erected in 1702. Surprisingly it’s not a war memorial; rather it’s something quite unique to Ripon. The ‘Ripon Hornblower’ is one of the quaint English historical rituals, whereby at 9pm a chap walks round the obelisk & blows his horn four times before announcing that all is well. The story behind this dates to King Alfred in the late 800s AD; he won a nearby battle against the Vikings, then allegedly came to the town bearing a horn. On presenting this to the townspeople, he implored them to be watchful in case the Vikings returned (one assumes the horn was designed to be blown as an ‘alert’ in case of trouble). A ‘wakeman’ was appointed whose job was to patrol & protect the city, one of whose roles was to blow the horn at the market cross & let people know they were being looked after. Despite no obvious threat from Vikings in the last few centuries (assuming no threat from IKEA or H&M), the ritual has continued daily to the present day – the cross being replaced by this obelisk to commemorate the ritual & the story. 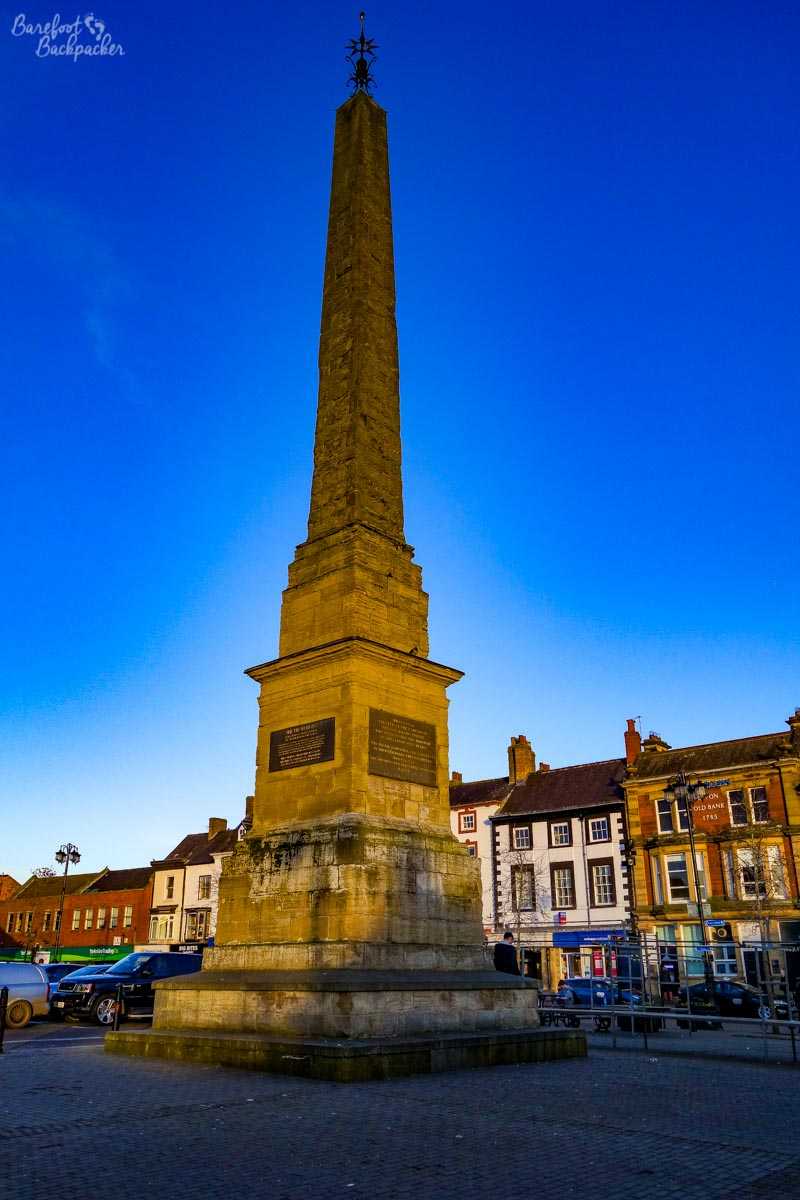 The obelisk, of Ripon Hornblower fame.

Also on the square is a small blue/white cabin, known as the “Cabman’s Shelter”. Installed in 1911, it’s was originally built to provide a place for taxi drivers (cabmen) to wait for fares. These days, of course, taxi drivers wait in their cars in a ‘taxi rank’ at the side of the road, but when it was built most cabs were open vehicles, and Yorkshire is wet and cold. After falling out of use & being left in pretty bad condition it was restored by the Ripon Civic Society & returned to the local council as a historical monument. 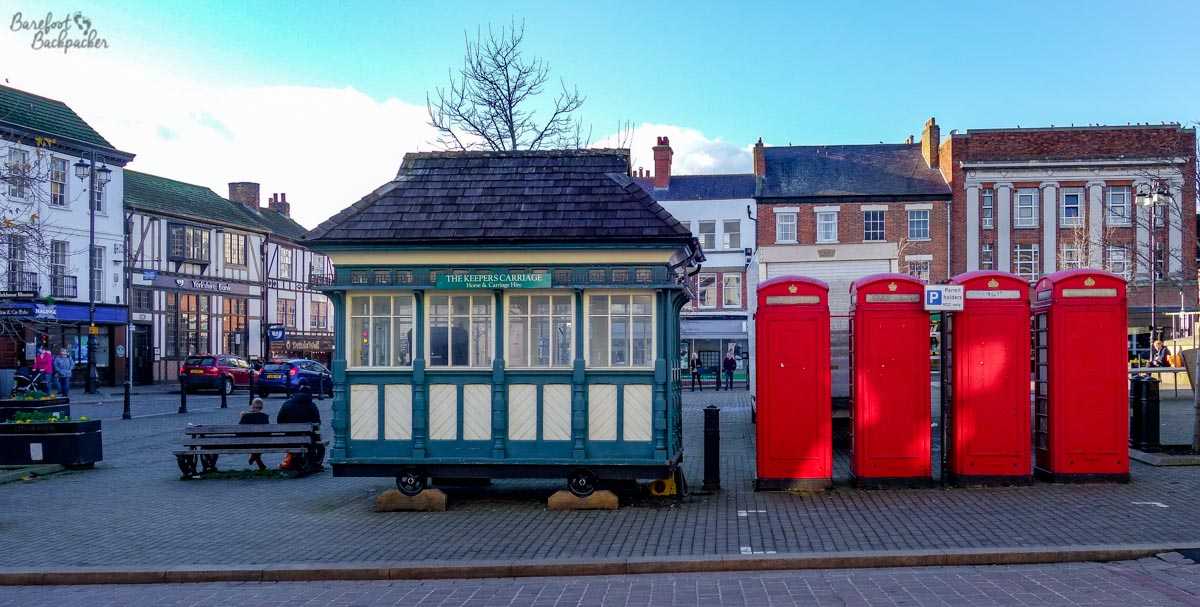 Close view of the Cabman’s Shelter, in Ripon. Also note the telephone boxes.

The other claim to fame Ripon has is of being one of several towns in the area with a horseracing course (others nearby include Thirsk & Wetherby); horses seem to have been run near the town from the middle of the 17th Century & as early as 1723 Ripon hosted the first race purely for female jockies. It’s a flat-racing course of just over 1.5miles & the current course (dating from 1900) lies just outside the Eastern edge of the city.

So, while you might only pop by for a couple of hours, there’s certainly enough in Ripon to warrant more than a passing wave at the signposts. 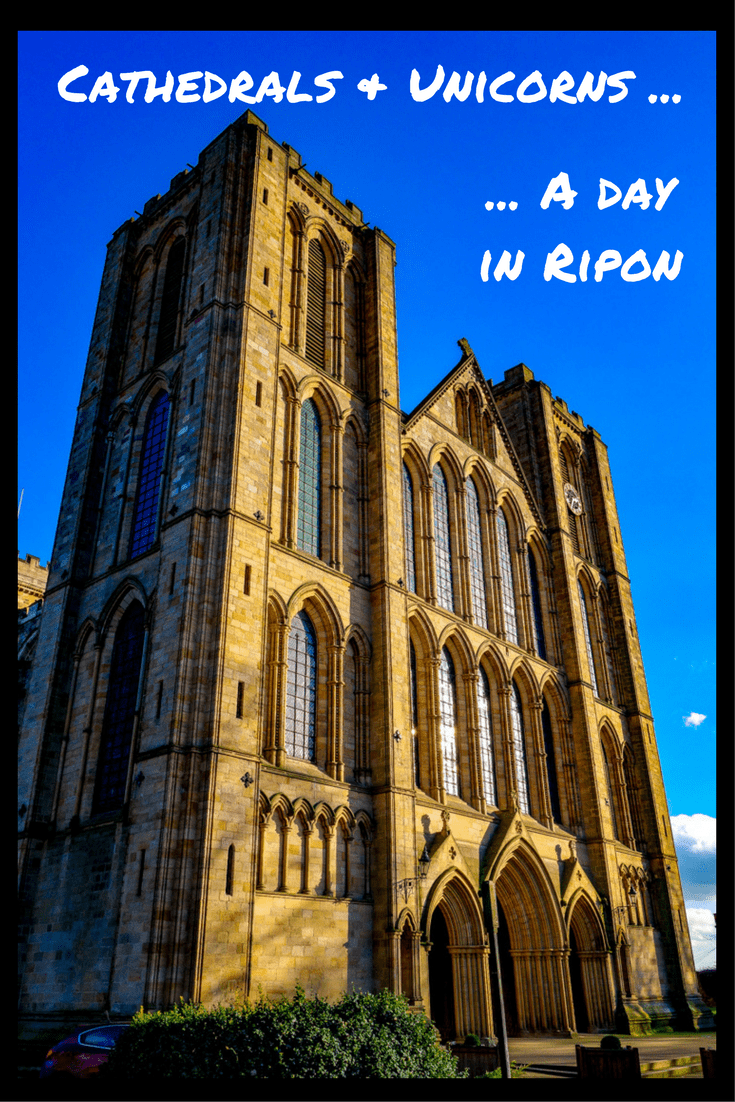 Authorities visited: North Yorkshire. Dates Visited: 4 February 2017 and 14 August 2017.
Much of this content is also mentioned on Episode 29 of my podcast, where I talk not just about Ripon, but also West Yorkshire in general, and both Haworth and The Cragg Vale Coiners in particular.

4 thoughts on “Ripon: Cathedrals and Unicorns”