“You scruffy man; next time I see you I hope you’re wearing socks.”

If I’d ever had doubts about my Parliamentarian tendencies in favour of Royalist sympathies, the brief chat I had with King Charles I in Newark quickly dismissed them. A grumpy, arrogant, selfish man who, despite having had his head chopped off over 360 years previously for precisely this bloody-minded refusal to accept times were changing, still believed he was there by the grace of God and therefore superior to everyone else in the museum, and treated the common man with contempt and a good dose of patronisation. Oliver Cromwell may have been a religious extremist, and incredibly unpopular for banning not just Christmas festivities but also football, but at least he was much more in touch with the British public.

Or something. I guess we shouldn’t be putting 21st Century morals on 17th Century society. 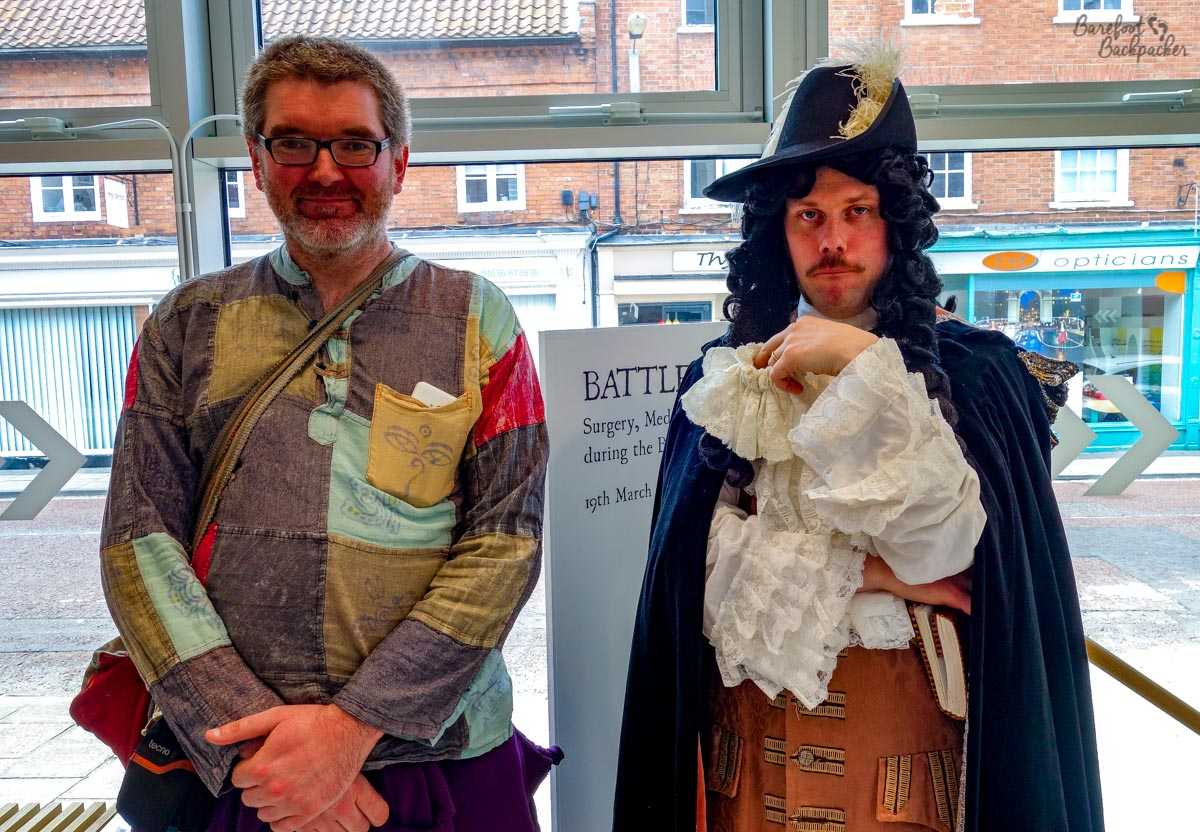 Selfie with the King. Neither of us are particularly impressed.

In fact, Cromwell wasn’t to be found anywhere in Newark; this part of England was very much a Royalist stronghold and indeed the King’s last night of freedom before his surrender was in nearby Southwell – about which more later.

I am of course talking about the “English Civil Wars”, a series of conflicts in the middle of the 1600s that pitted brother against brother, father against son, and are believed to have caused the deaths of more English soldiers than any other war in history (more even than the Wars Of The Roses two centuries earlier). Predominantly, it was a battle of power: in the red corner was the Monarchy – the concept of a sole ruler, appointed by God, to rule as an autocrat, power passing to their child upon death – led by King Charles, while in the blue corner was Parliament – the concept of a body of officials, elected by the public, who acted en masse to represent the views of the people as a whole rather than one sole individual in particular – the most vocal of this group being Oliver Cromwell.
Spoiler alert: Parliament won, chopped the king’s head off, but then Cromwell ruled pretty much as an autocratic state for the next 9 years (and his austere Puritan ways quickly became as unpopular with the people as the King’s corruption and lack of care had been). Upon his death, his son took over but quickly realised he was out of his depth and quit – after a couple of years of confusion, Parliament invited the king’s son back to rule. With severe caveats, mind; the role of the King in 1660 was much less than 1640, and indeed the UK’s current constitutional monarchy can be pretty much traced back to this point.

Newark was the scene of some of the fiercest fighting in the wars; its strong support for the King, coupled with its location, where the main London-Scotland road crossed one of the most important waterways in England (the River Trent), meant that it was always going to be high on Parliament’s target list. Indeed, it was the scene of much bloody fighting and the town itself was besieged three times between 1643 and 1646, and only finally surrendered on direct order of the King. Much of Newark’s modern tourist trail stems from this period, including the Civil War Museum which covers several floors detailing the background to the conflict, military uniforms and weaponry, and a general overview of what happened, as well as some interactive events, and a very in-character King Charles himself who gives talks. In his own style. 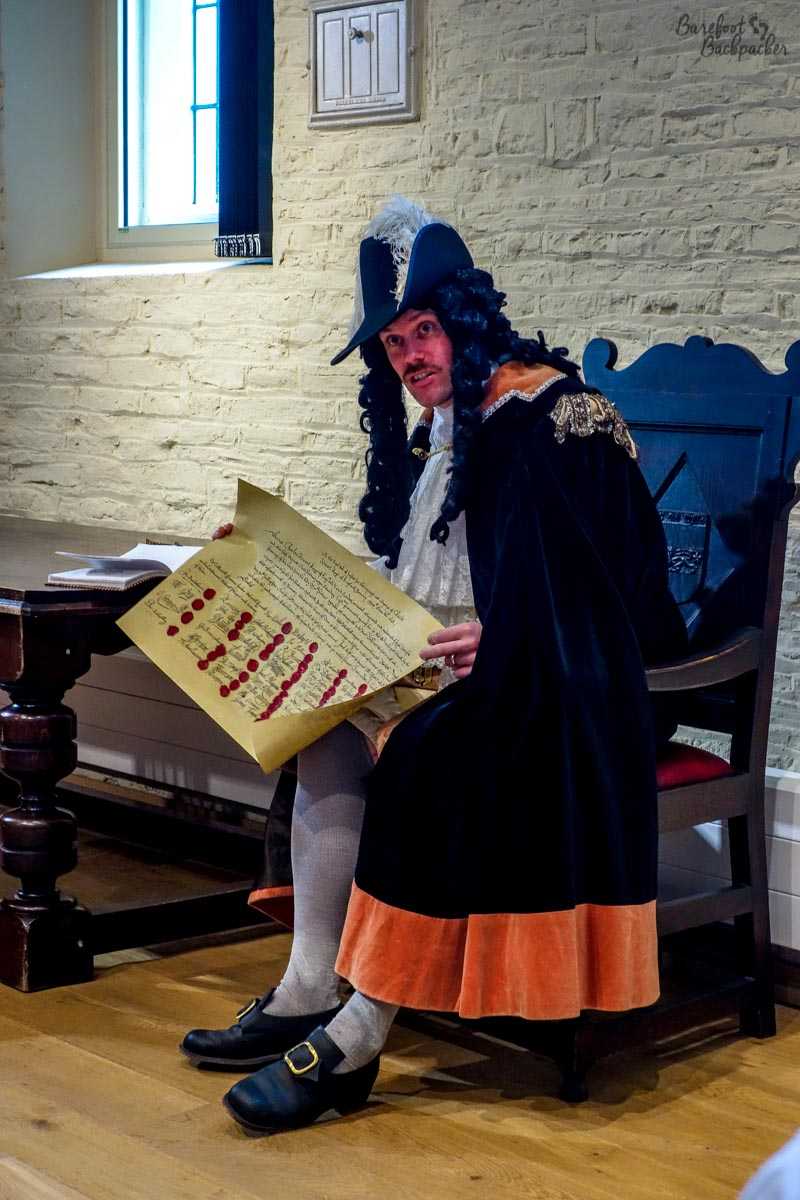 The King in his element; reading punishments of those who have displeased him. 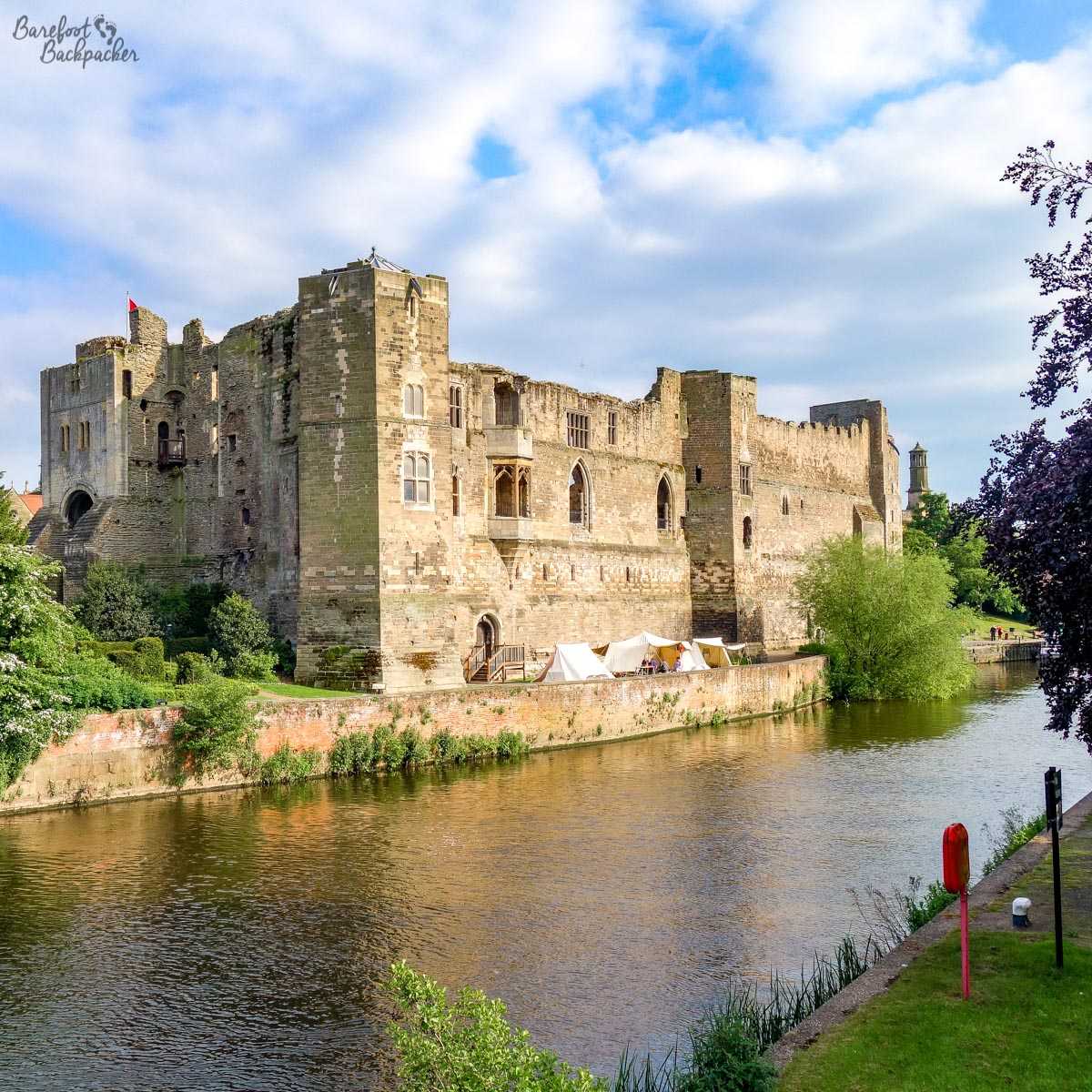 The outside of Newark Castle. Surprisingly much of the framework still exists, even if the interior isn’t still present.

In fact, Newark had been a significant town long before that; there has been a castle here since just after the Norman Conquest, which itself was the scene of an earlier monarch’s death. King John died here in 1216; like his later successor he was not a popular King – it was he who had been forced to sign the Magna Carta (pretty much the first English constitution) in 1215, and was probably in danger of being overthrown and murdered had he not fled across the swamps of Norfolk (The Wash) with England’s treasure, losing much of it in the process. He died a few months later, having reached Newark, of dysentery (joy!), generally unloved and un-mourned. 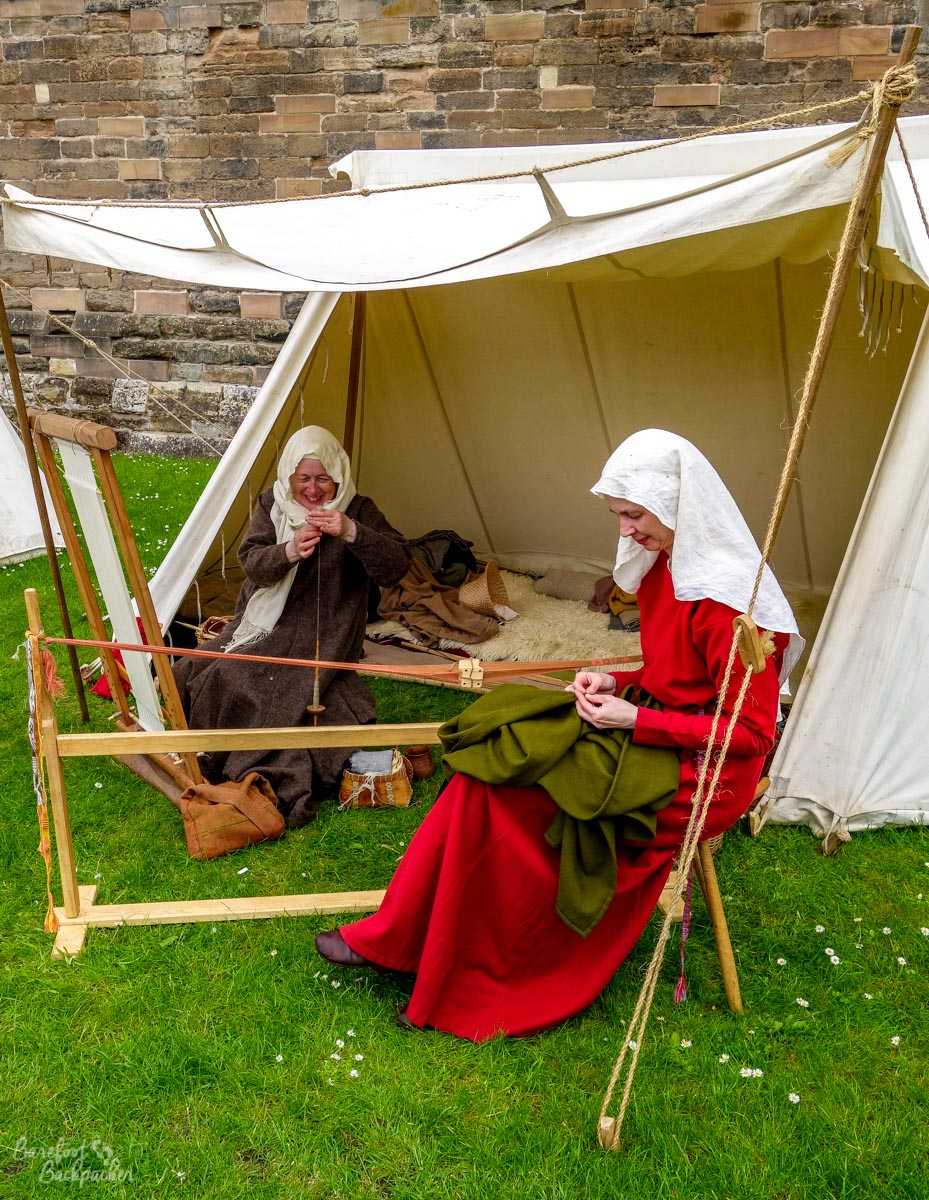 An example of the cottage industries present in mediaeval England – these are linen/cloth workers.

My visit to Newark coincided with a weekend of ‘living history’ events around the castle (this was co-incidental; my visit was actually designed to coincide with the annual beer festival held in the grounds of the castle!); the area surrounding the castle wall ruins was lined with stalls where you could see the sort of jobs that people did in mediaeval times, including weaving, spinning, arrow-making, smithery, and the like, while in the centre of a field there was a representation of a jousting and melee tourney, with people dressed up in armour and bedecked in tributes hitting each other with swords, all while a King and a Bishop watched on, approvingly. 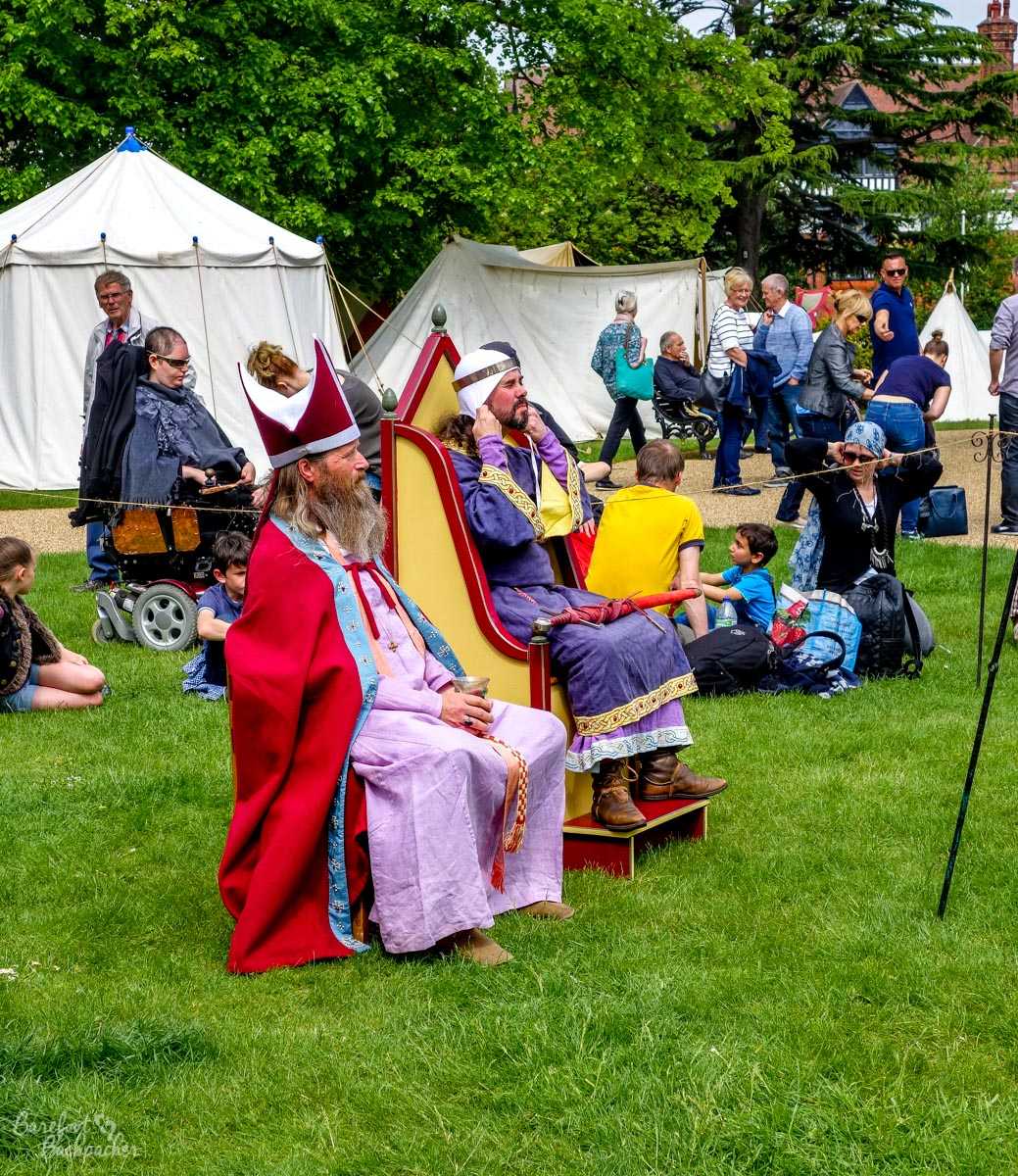 A King and a Bishop watch the festivities from designated chairs, whilst the unwashed masses stand on the edge. 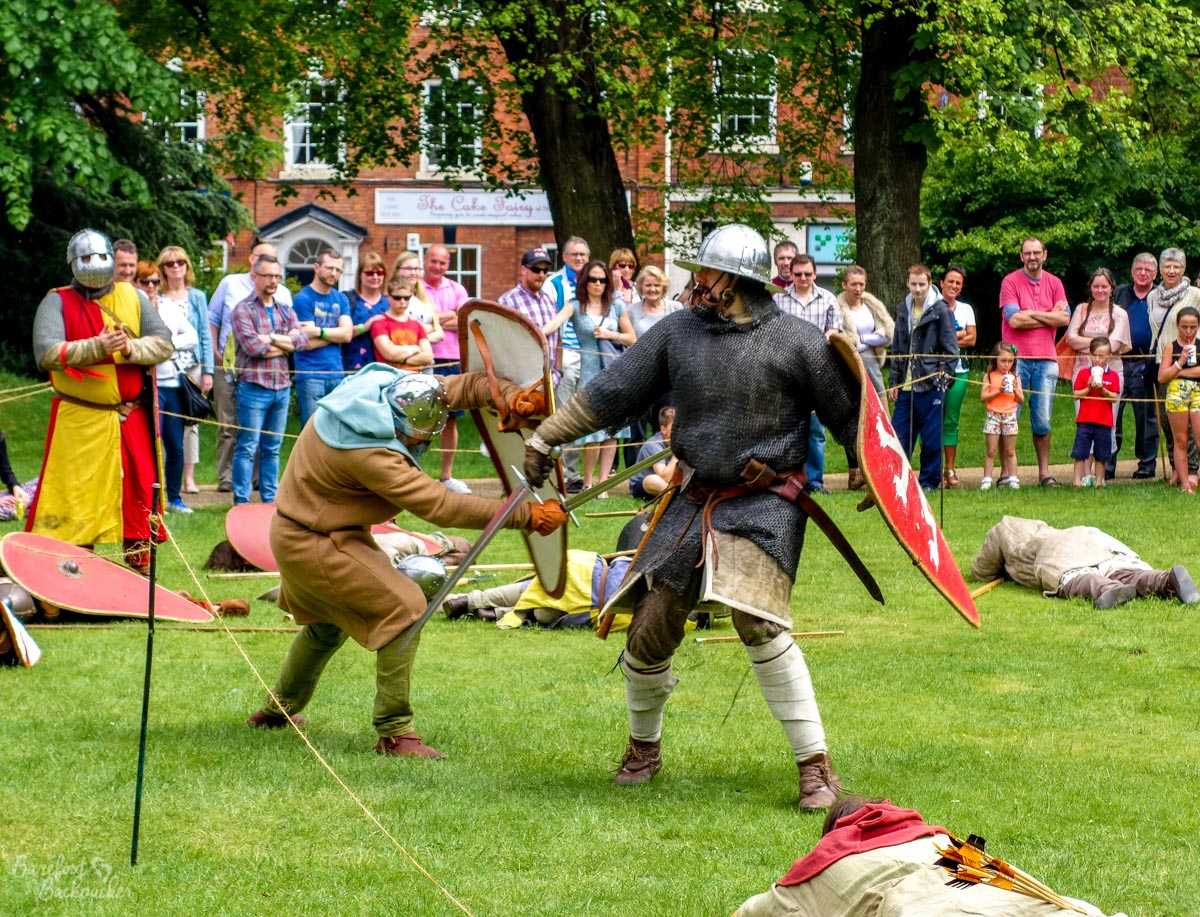 Scene from the battle tournament. Each fighter had shields and tokens depicting who they were representing, and who in the crowd was supporting them.

A little way to the west of Newark lies the town (*) of Southwell. Now, this is quite small (about 7,000 people), quite affluent (Private School, notable choir, cafes and local butchers but no supermarkets) and, unusually for the area, not dominated by a (closed) heavy industry. Having been inhabited since Roman times – there’s evidence of a Roman Villa, and the major Fosse Way runs fairly close by – it’s main ‘claim to fame’ is it being the location of Southwell Minster, an Anglican cathedral and seat of the local bishop. 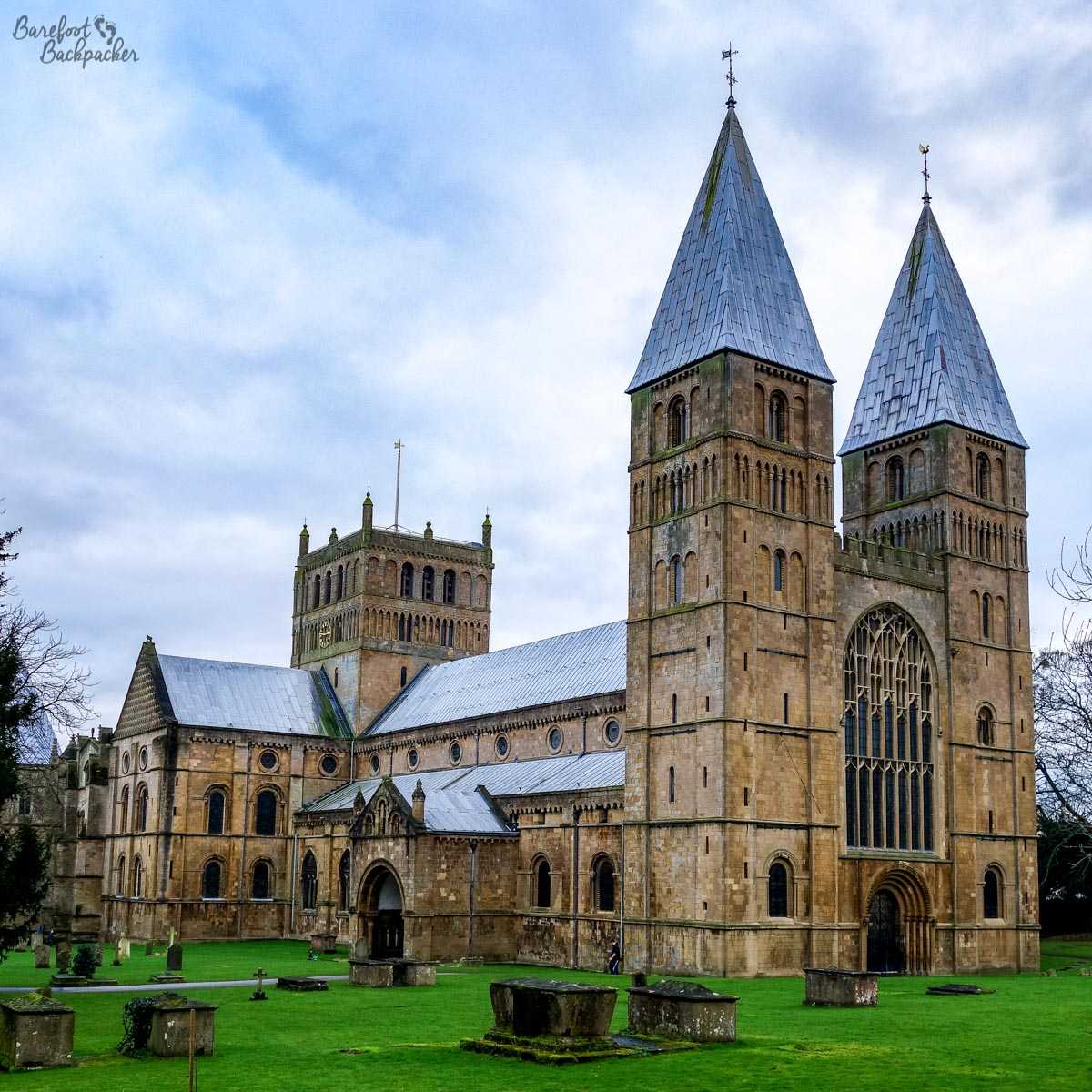 ‘Minster’ comes from the same root as ‘monastery’ and refers to a central ‘hub’ of religious power run by monks; it is the same sort of building as the much larger and more famous York Minster. There’s been at least a church on site since the 600s AD, though it became an important powerhouse in the early Norman period, presumably because of its convenient location. Over the years Southwell Minster was upgraded and expanded – an archbishop’s palace was built to the South that contained a ‘State Chamber Room’ for visiting nobles and dignitaries, including the aforementioned King Charles as mentioned. These days it serves as the cathedral that marks the centre of the Anglican Diocese of Southwell that covers the Nottinghamshire area. 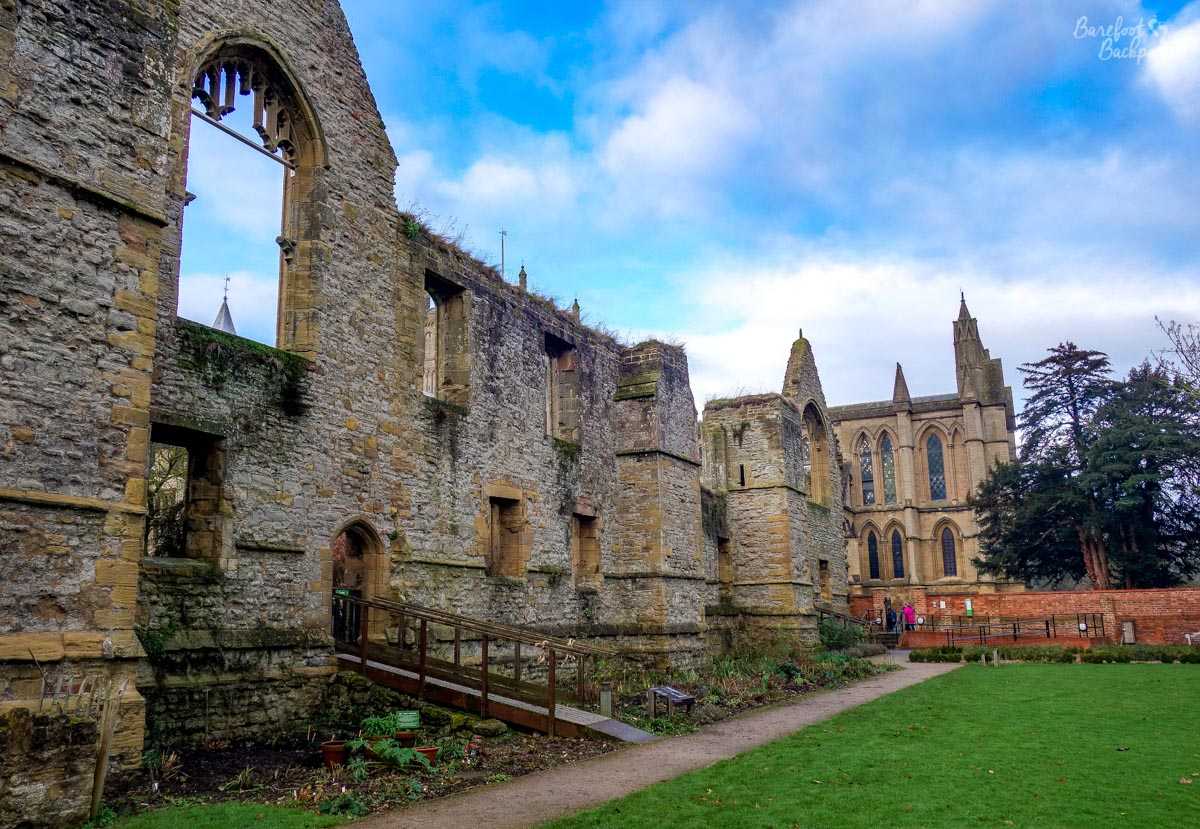 The ruins of the Archbishop’s Palace. Only the main hall and this one other wall survive, complete with latrine tower!

Southwell’s other claim to fame is that it’s home to the original ‘Bramley Apple’ tree, one of the most famous ‘breeds’ (the technical term is ‘cultivar’; I’m so not a nature person so I had to look that up!) of apple in the world. It’s a very sour apple, so it’s not one to eat as a snack; instead it’s *the* go-to apple of choice for apple pies, apple crumbles, and apple tarts, with a secondary use in the production of home-made apple wines and other strong alcoholic drinks. 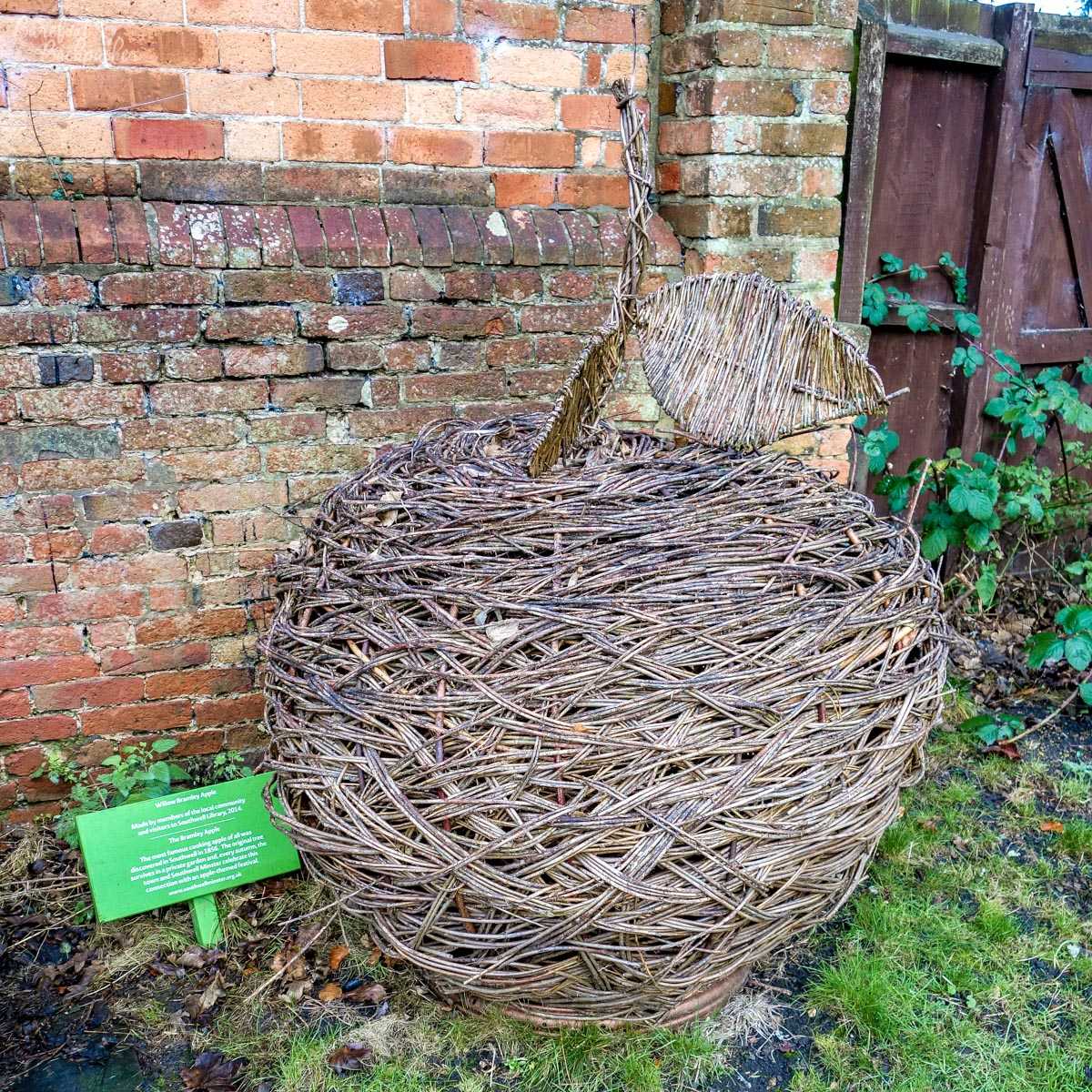 Representation of a bramley apple, in the grounds of Southwell Minster.

The first tree grew from pips planted in the back garden of a house in Southwell in 1809 by a young girl called Mary Brailsford, and both cottage and tree still exist today. Some years later, the house was bought by a chap called Matthew Bramley; when someone wanted to buy the apples from the tree for re-sale in a local shop, Matthew (obviously quite quick-witted with an eye for marketing) agreed, but with the proviso that the apples were labelled with his name. (This very fact has always been confusion since there are places in the UK called ‘Bramley’ and I always assumed the apple came from one of them.) Obviously the initial sales were a great success, and an entire brand and culture was born. Many seedlings and croppings have since been taken over the years of course so even if the original tree dies, we won’t ever run short of Bramley Apples. 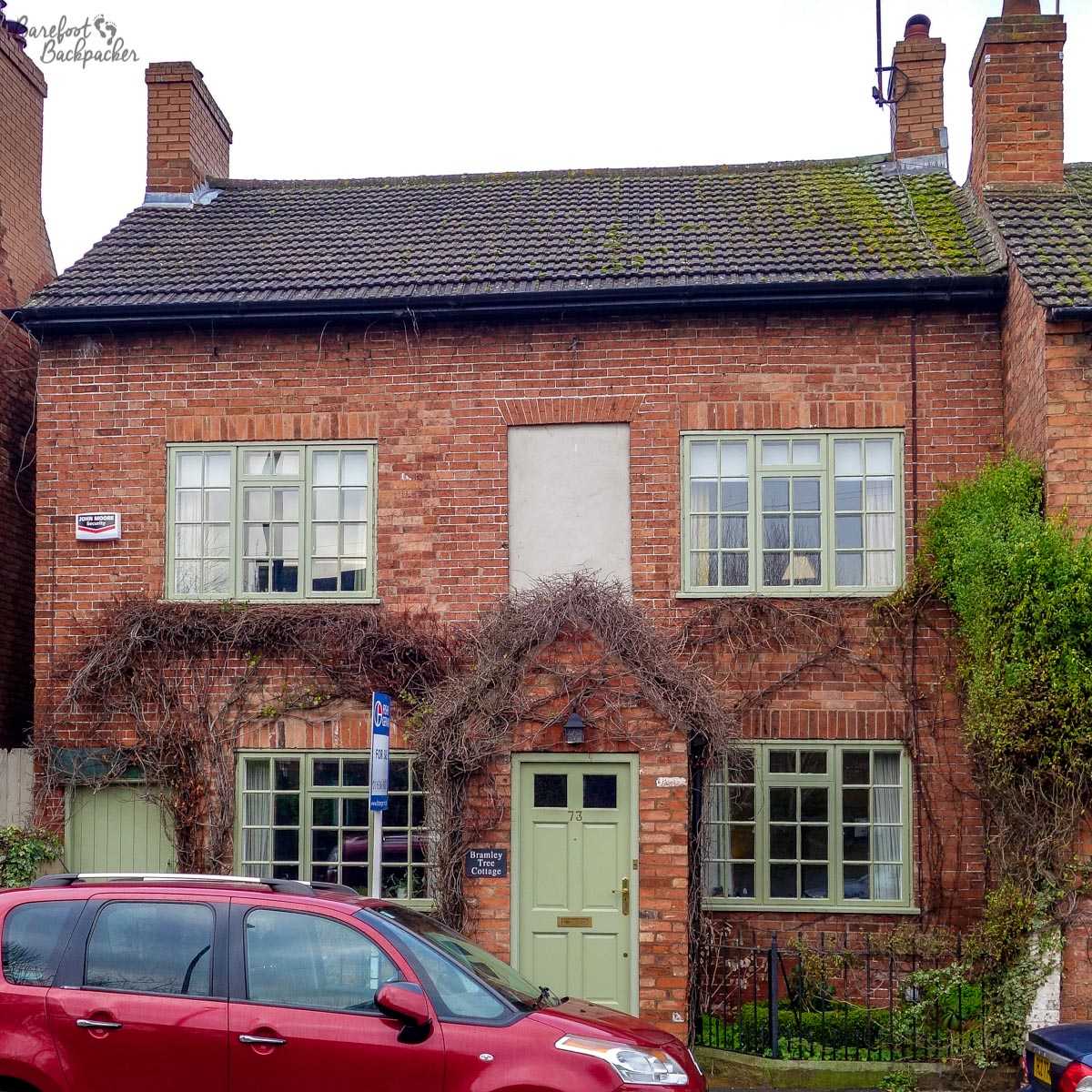 Bramley Tree Cottage. It’s in the back garden of this house that the tree still stands.

Southwell commemorates the apple in many ways – there’s an art sculpture of an apple in the grounds of the Minister, the “Bramley Apple Inn” a few doors away from the cottage, and a yearly ‘bramley apple festival’ in the town, with food, drink, and entertainment – including dances from the local Morris Dancing troupe.

(* Contrary to popular belief, ‘city status’ in the UK is conferred by royal charter, not by the presence of a cathedral, although certainly historically one begat the other, so there was a direct connection. As an example of the opposite, Swansea is a city without a cathedral – at least not an Anglican one!).