“Climbing up Moel Famau, there’s a chippy at the peak /
At least that’s what they told us; it must be closed midweek”

Mention to anyone of a certain age who was brought up in Liverpool the word ‘Colomendy’ and you will get a wistful, possibly mischievous, smile that harks back to that ‘nostalgic golden age’ that most people remember with misty eyes.

As one of the largest cities at the time, it was feared that children growing up in the city would end up having restricted access to the countryside and fresh air. Originally built as a small concentration camp for prisoners of war in World War II, the site in North East Wales between Mold and Ruthin later known as Colomendy (originally consisting of only a couple of cold, draughty, period dormitories) was requisitioned by Liverpool City Council to provide a ‘base’ for city children to experience country life; climb mountains, explore small villages, meet with farm animals, etc – generally school trips took place in the last year of Primary School (aged 10-11), lasted a week and were often the first time that they had spent significant time away from their parents. Cue the crying, the temper tantrums, etc. Over time it’s expanded to become a full ‘outward bound’ type centre (now called Kingswood) that offers all manner of exciting activities; when I went we had lots of colouring-in of pictures, a walk around a quarry, a walk around the village of Maeshafn, a walk through the neighbouring Loggerheads Country Park (clocked a theme yet?!), and a walk up the nearby mountain, Moel Famau. 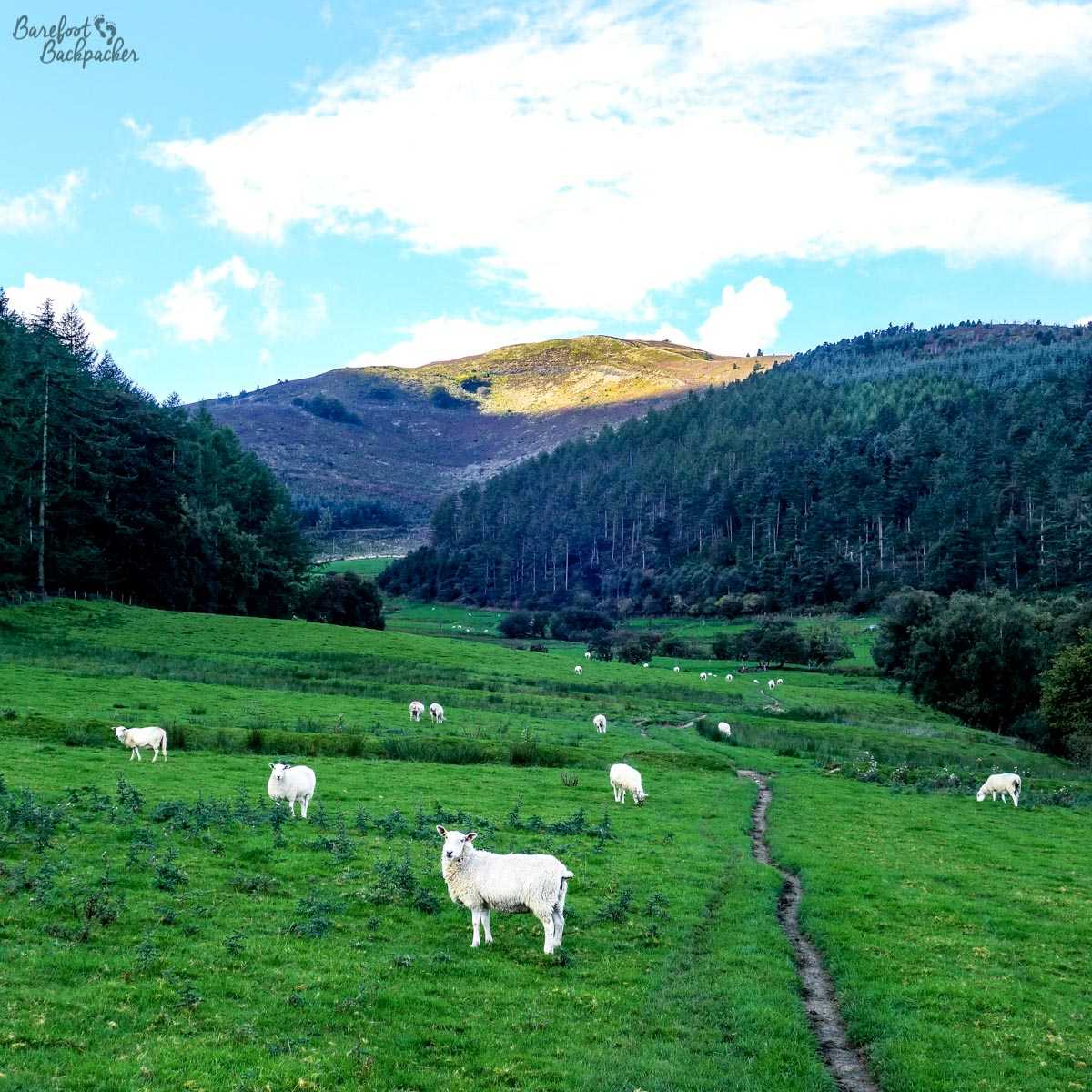 Moel Famau, in the distance, being defended by sheep.

Except on my trip, the weather was bad on the day my group was going to go up, so we did colouring instead. I was thus denied my first mountain. And sometimes, it’s the little things that rankle you through your life; sometimes it’s the small things on your bucket list that are the most important. And yet, because they’re so small, and so relatively ‘near / easy’, they often get overlooked. 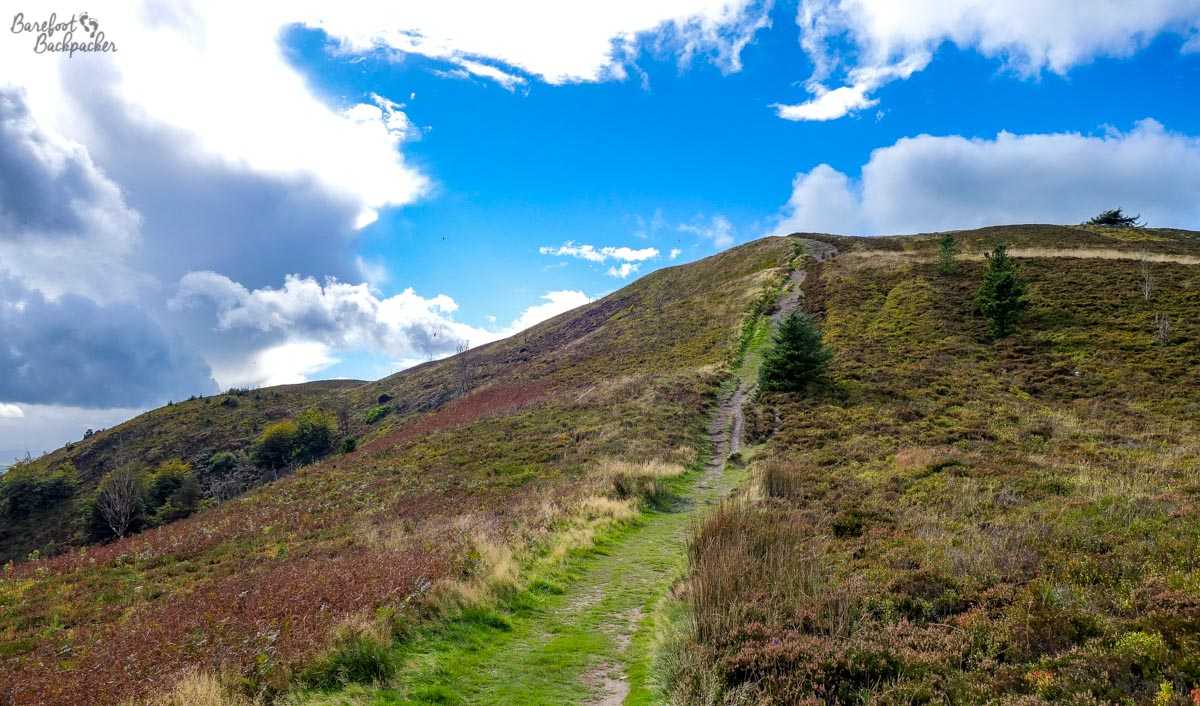 The path up Moel Famau; I’m not sure the picture can really show how steep it was!

I had a free Sunday coming back home from Birmingham, so I thought I’d finally make time to climb it – it was a bright sunny September day, and conditions seemed right. Now, I’d consider myself quite fit for a middle-aged man. But I have to say that was one of the steepest climbs I’ve done for a while – even steeper than I had at Pendle Hill. My mind went back to being a 10-year old and wondering how I would have coped with it. It’s a lovely walk along country lanes, moody footpaths through fields of sheep, and up winding trails surrounded by rocks and low bushes. With a clear sky, the view is incredible – even from halfway up, on the obligatory ‘I need to take a breath’ stops, you can see as far as the windfarm in Liverpool Bay (some 35km away).

The view from the top of Moel Famau, looking (I think) vaguely North-ish.

Despite the rumours amongst generations of schoolchildren, there is no chip shop at the top. There’s not even a burger van. What there is, is a ruined lookout post from which you can see a panoramic across the whole of North Wales and Cheshire, and an awful lot of wind – I felt somewhat uncomfortable up there and you could hardly hear yourself think. 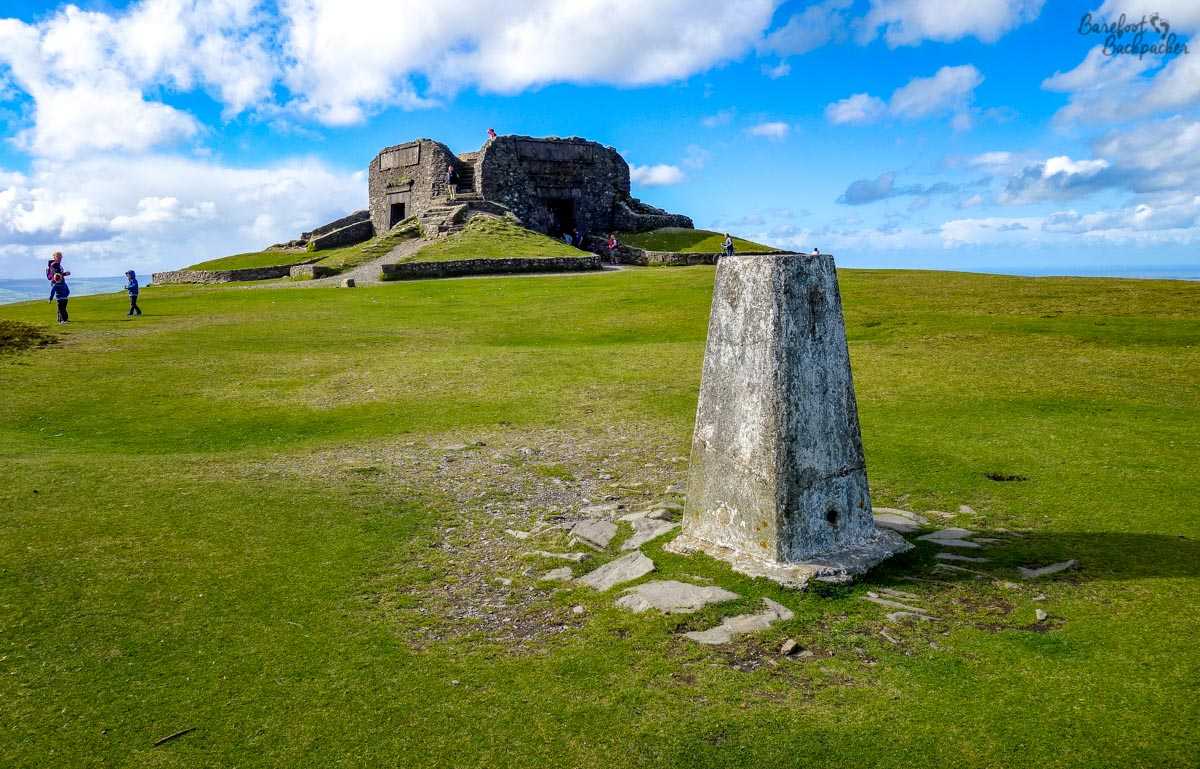 The Jubilee Tower at the top of Moel Famau, and an OS Trig Point.

This lookout post is the ‘Jubilee Tower’, commissioned to celebrate the Golden Jubilee (50 years) of King George III in 1810 (he’s the one history has dismissed as being ‘a bit mad’) and constructed between 1813 and 1817; it originally had a tower/obelisk rising 115 feet high but this fell down in 1862 due to bad weather and worse construction (at one point the architect and the main builder had a row that caused construction itself to stop for two years during the build – one assumes also that Georgian builders put more effort into their houses – see Bath – than their monuments). That said, the base of the tower has lasted quite well ever since, and is a major focal point for the locals. Assuming they manage to climb the hill …

I chose to take a different path down, a longer but less steep route that took me through the heart of Loggerheads Country Park.
Originally a milling and mining area, the country park is now mainly made up of a small forest (ash, oak, and sycamore, apparently) close to the River Alyn. Evidence of its industrial past – including an old waterway – can be seen around the park, which still houses a working flour mill, though predominantly this is for tourism rather than commerce. Going deeper into the woods, natural beauty takes over with limestone cliffs and gorges – many of which would have been mined in the past. 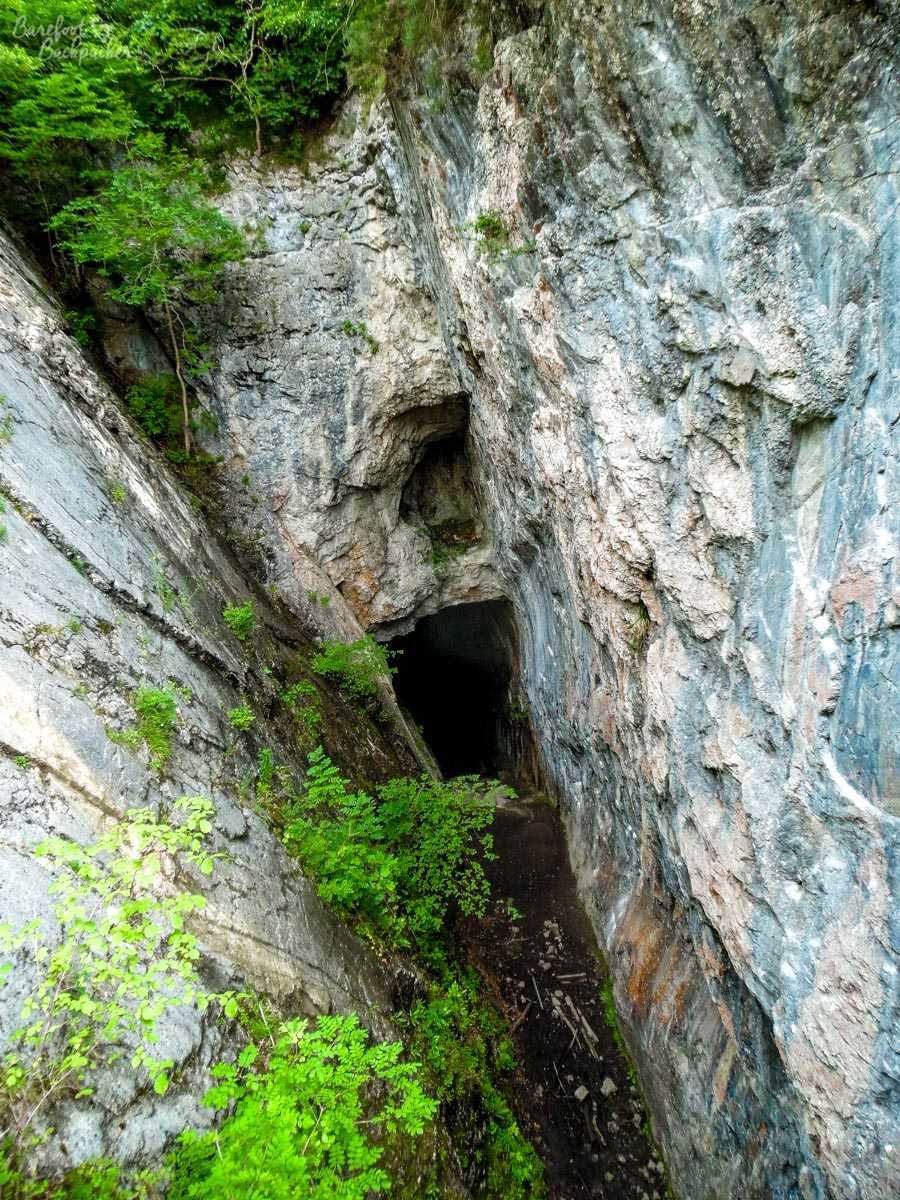 The “Devil’s Gorge”, in Loggerheads Country Park. No-one was abseiling on my visit…

One such is the so-called Devil’s Gorge, a 120ft cleft in the hillside probably used for lead mining that’s now only normally visible via a footbridge, but which I have distinct memories of walking into as a 10-year-old child (one of other kids on the trip got a huge splinter here and had to be taken to hospital; Health & Safety not having as much day-to-day impact in those days). The trail there is a couple of miles through the woodland, and the path is punctuated by side trails, little tunnels through the rock (great for children to play hide-and-seek), and the occasional view over the fields to the west. It’d be a great place to some trail-running through, actually, as it’s relatively flat and easy terrain. Also a good place to pretend to be a wood-elf and go marching through with plastic swords and tin-foil armour. Not that I have ever done LARP-ing. Of course not. 🙂 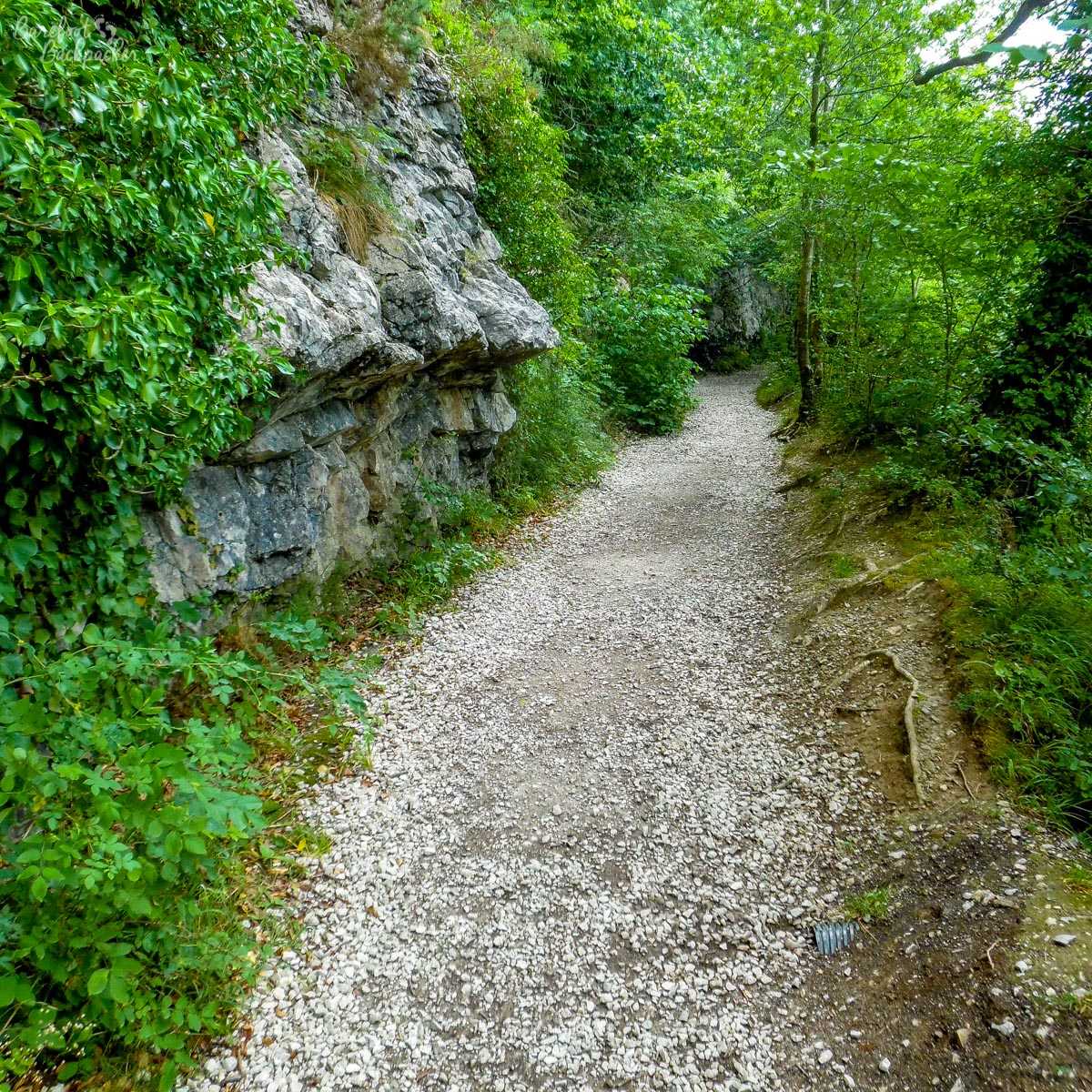 One of the paths through the country park, sadly devoid of wood-elves!

It’s part of a larger Site Of Special Scientific Interest (covering about 190 hectares, or just under 200 rugby pitches. Its designation means it’s protected from development because of its unique geology. There is also some history here – evidence has been recently found in one of the caves in the park of habitation by humans in the neolithic period; human bones were discovered that have been dated to around 3000 BC.

The park is named after the nearby village of Loggerheads; its unusual name is said to come from a dispute in pre-Victorian days between two landowners (in Mold and Llanferres) about where the boundary between their estates should be – presumably it was a long, drawn-out dispute with little compromise on either side. The boundary is marked by a stone on the main road that dates back to this period, making this the exact location of the dispute that gave the village its name – it’s now the boundary between the modern authorities of Flintshire and Denbighshire. On the Denbigh side, the “We Three Loggerheads” pub commemorates the dispute (the third ‘loggerhead’ being the people watching, in a rather odd case of ‘breaking the fourth wall’), while on the Flint side, the ‘Colomendy Arms’ pub serves better beer … 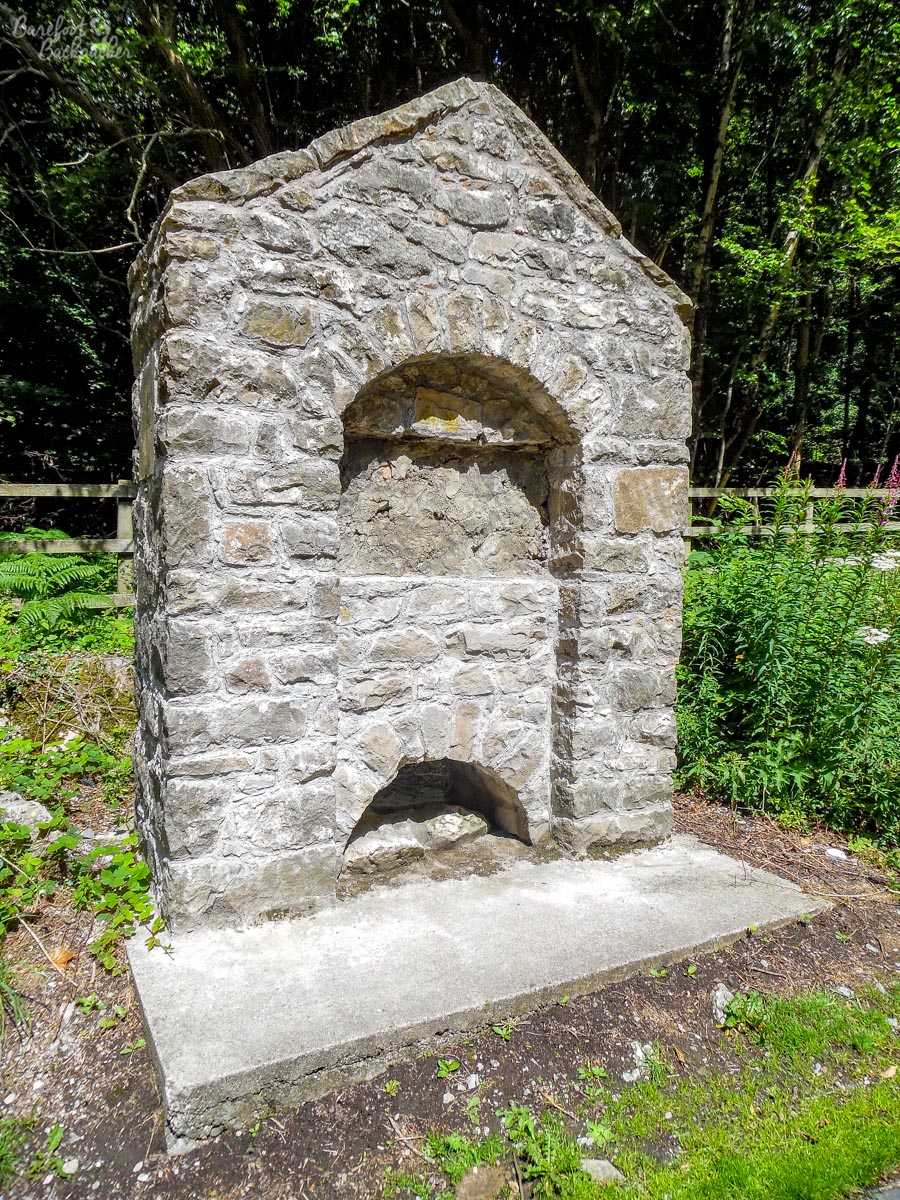 All of this is inland. When Scousers need some seaside, they often head to Rhyl. Located on the Welsh coast due north of Ruthin, although further from the city than genteel Southport, it is more ‘downmarket’ and caters more for the cheap ‘package holiday’ crowd, with mini-golf, cheesy promenade arcades, chalet accommodation, and plenty of ‘buckets-and-spades’. Seafront multi-story hotels, Full English Breakfasts, warm lager, and hen nights abound. Outside of the holiday season it suffers from the same socio-economic problems as other small seaside resorts, leading to it being one of the most deprived parts of North Wales. I’m not really selling it as a place to visit for the sort of people who read this blog, am I?! 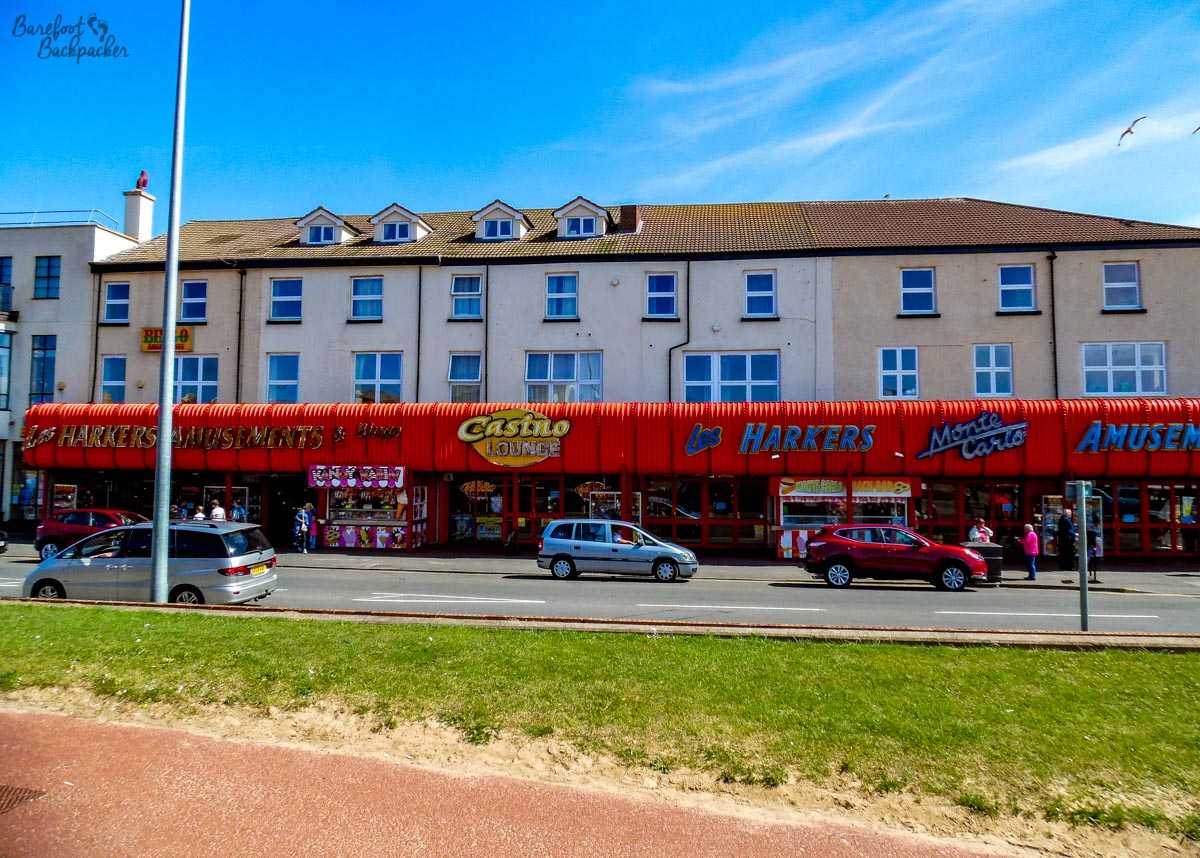 One of the high-spots of Rhyl promenade – a cheesy amusement arcade and casino.

The most famous spot was the “Sun Centre”; I’d never been and it’s so not my sort of holiday entertainment, but it occupies a firm place in my childhood memories since BBC Radio Merseyside used it as a prize-winning destination (this was, admittedly, in the days before Easyjet and Ryanair, when people’s expectations were maybe more … low-key). It was really nothing more than a glorified sports and leisure centre, but for working-class families from inner-city Liverpool, it was the closest thing we had to the Med. It’s also now closed and a bit derelict; the council ran out of money to keep it open in early 2014, which maybe sums the town up a little. 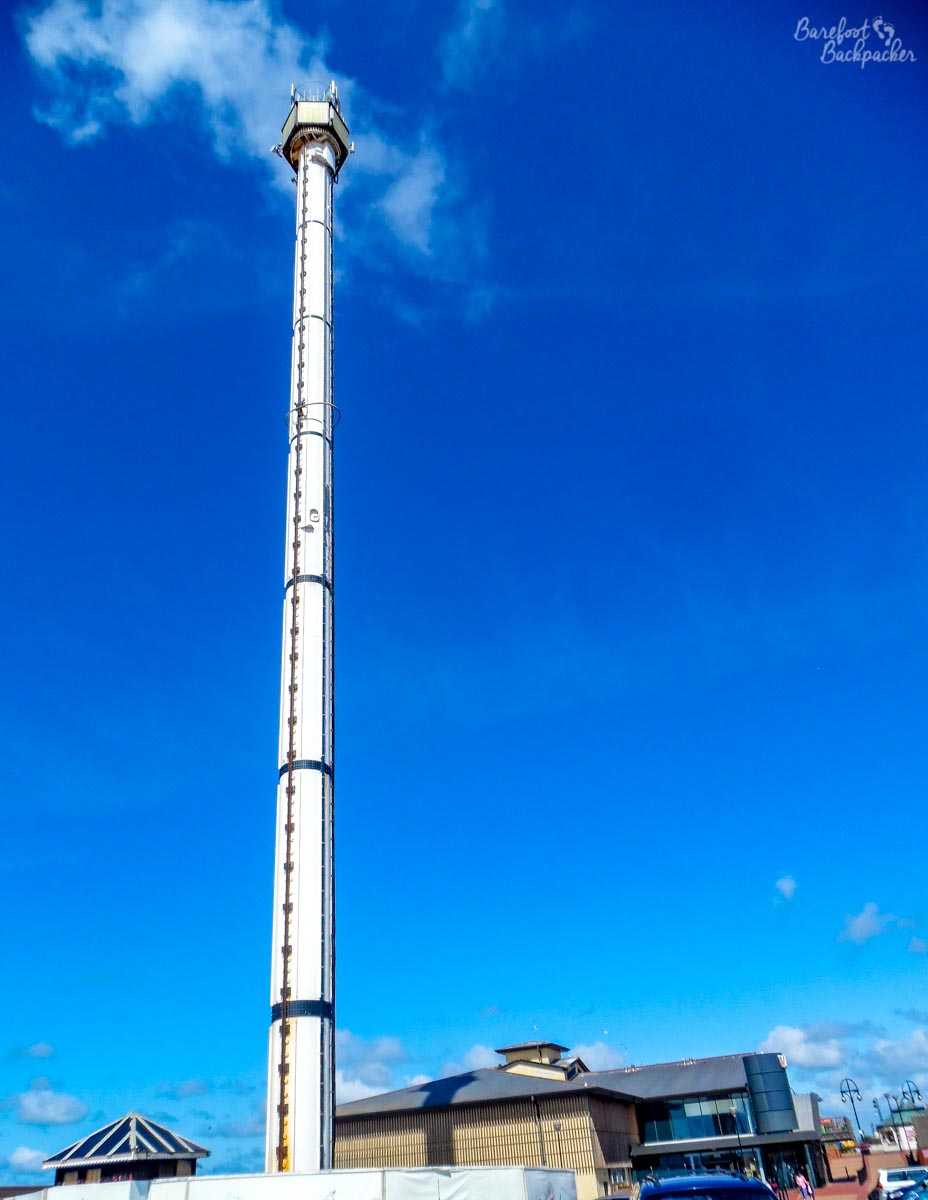 Rhyl’s Sky Tower. 76m high. Opened in 1989 as a revolving observation point and gondola ride. Closed 2010 due to lack of visitors and repair costs. Obviously Rhyl is that photogenic…

Rhyl does have its bright points; the promenade is lined with weird art installations, mosaics, and sculptures that provide a bit of culture and colour, whilst the beach itself – the main draw for most of the tourists here – is large, sandy, and, by being North-facing rather than the West-facing beaches nearer Liverpool, a little less windy and harsh. You get the same view of the windfarms and oilrigs in the Irish Sea though… 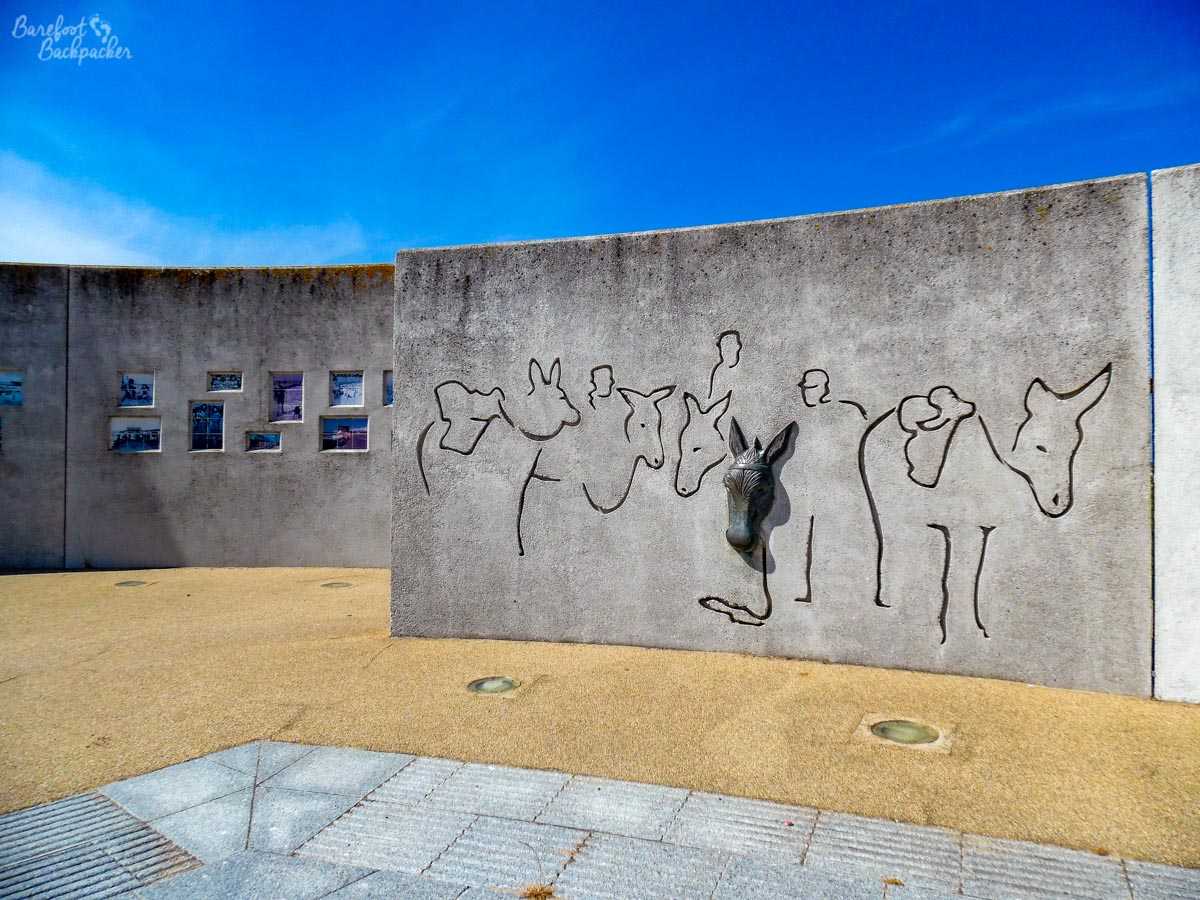 Part of the weird art installation on Rhyl Promenade. No, I’m not quite sure either … 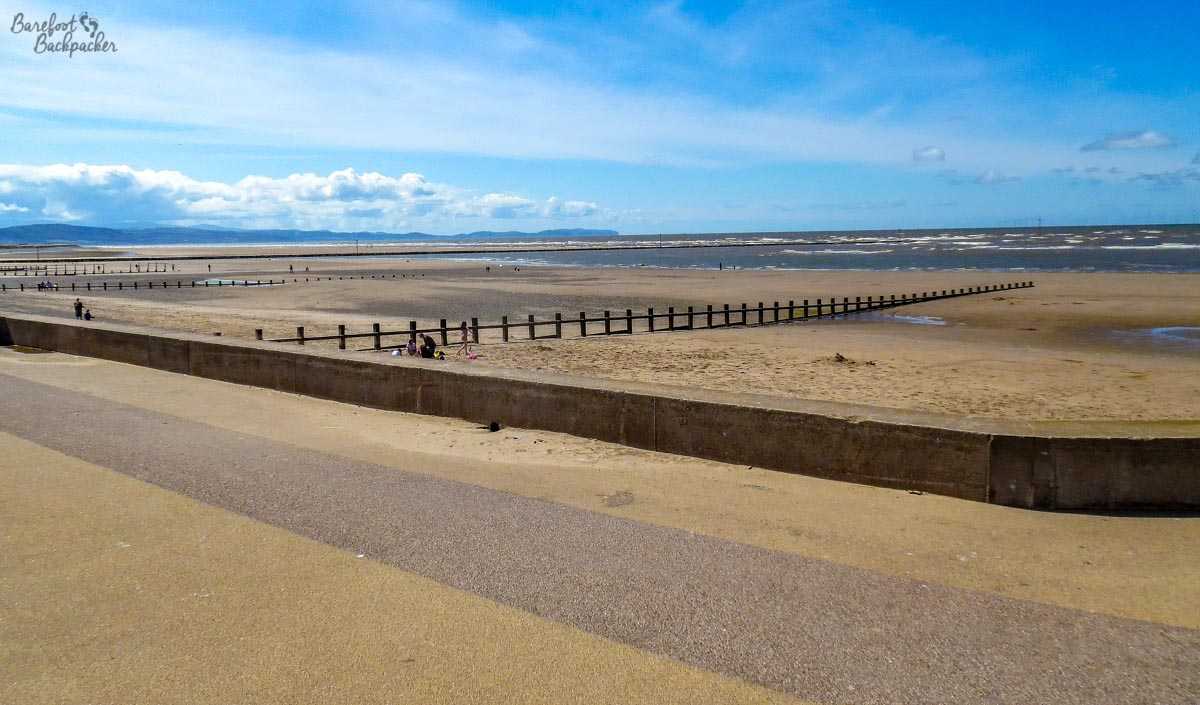 Rhyl beach. Interestingly, despite being a warm summer day, it was remarkably empty …

It is, however, more of a draw than the commuter towns on the England-Wales border – Mold, Shotton, Queensferry, Flint – which are almost exclusively residential and serve as cheap places to live for people who work in the industrial belt that stretches from the steelworks and power station at Shotton, across Northwest Cheshire to the chemical works at Stanlow/Frodsham, and ultimately to the Industrial ‘New Town’ of Runcorn. It’s also notable for a large airbase and aircraft manufacturing plant at Broughton. These towns are functional rather than aesthetic, and have a dour, almost grim, feel.

Mold itself does have one minor claim-to-fame; it was the home of the foremost Welsh-language 19th Century novelist Daniel Owen. Although these days the knowledge of Welsh in this North-East corner is relatively small (in the 2011 census in Flintshire, 20% of people claimed to have ‘some knowledge’ of Welsh, while less than 13% said they could speak it), back in Victorian times, it was far more common for people in Wales to be able to speak the language. Educated primarily at the local Sunday School, he ended up training as tailor and ran his own shop in the town for many years; in his spare time he was both a writer of poems and novels, and a preacher at the local chapel. He regularly used Mold and surroundings in his works, most notably in his early novel ‘Rhys Lewis’ where he described a riot which was ‘suspiciously similar’ to a riot following a trial of local miners in June 1869. 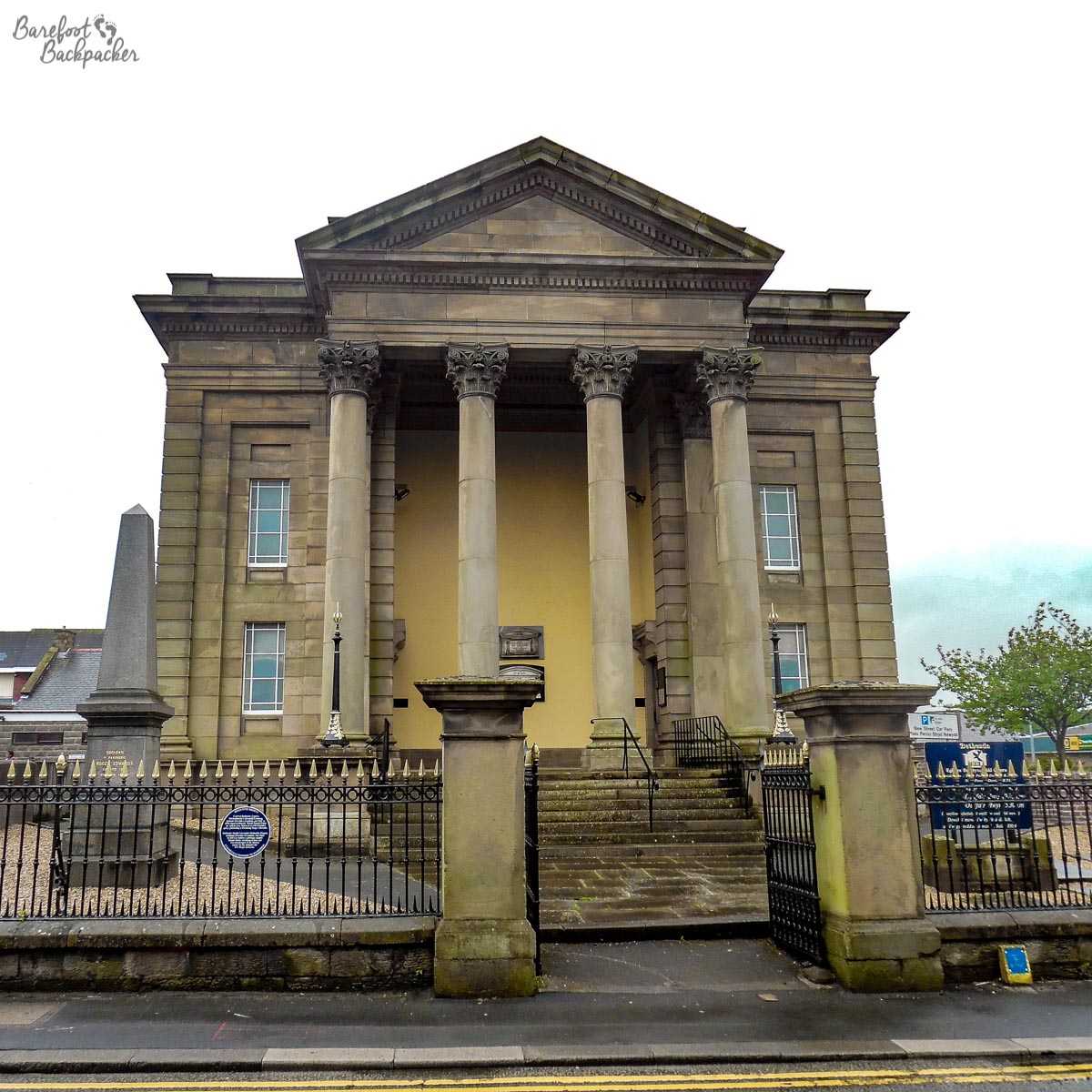 The Bethesda Welsh Calvanistic Methodist Chapel, where Daniel Owen worshipped and where he was encouraged to write.