Now, that might sound like a strange thing to say, given that you’re reading a blog on the website of someone who travels around the world, and whose blog entries mostly concern either locations or aspects of travel. However, I’ve been musing over the last few blogs I’ve written (not necessarily yet posted), and I’ve come to the conclusion that what I write isn’t, in fact, a travel blog. And I’m not sure exactly how I feel about this. 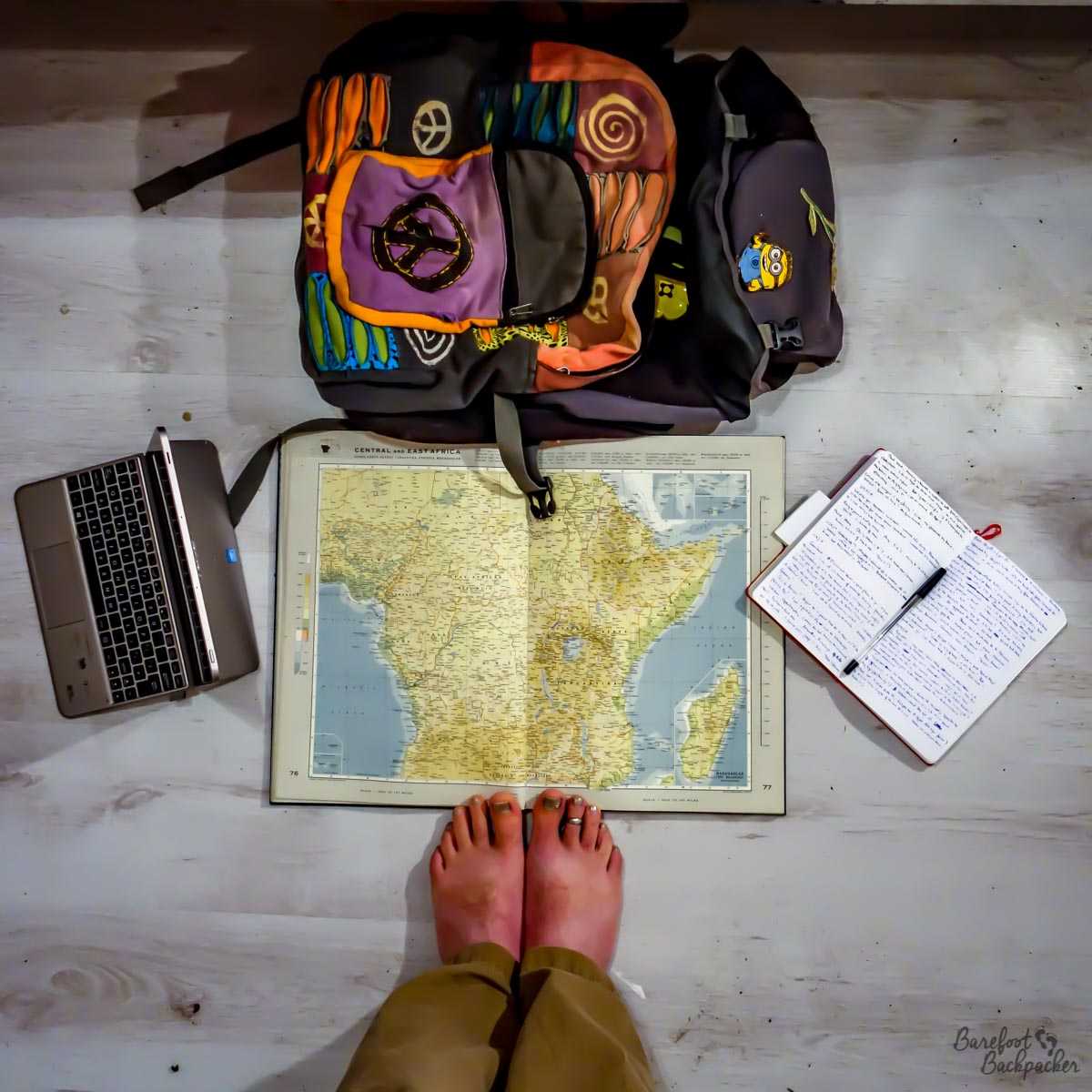 Partly this revelation has been driven by Instagram. In case you don’t know, I use Instagram as a kind of micro-blog – some of it is ‘in the moment’ blogging, descriptions and feelings of places I’m in at the time of posting, or about topics that come to mind suddenly that don’t really have a place on my main blog site; other times I post short, timely versions of what will later become longer, more detailed, web-blog entries about a place. This in itself makes me unusual, compared with the myriad of bloggers whose IG feed is full of artistic selfies captioned with a pithy travel-related quote, or posts about a hotel they’re staying in, or travel item they’re promoting. Or cats. I see an awful lot of cats in my IG feed. There’s nothing wrong with this at all, they’re all perfectly valid ways of using the tool, it just makes me stand out as unusual. 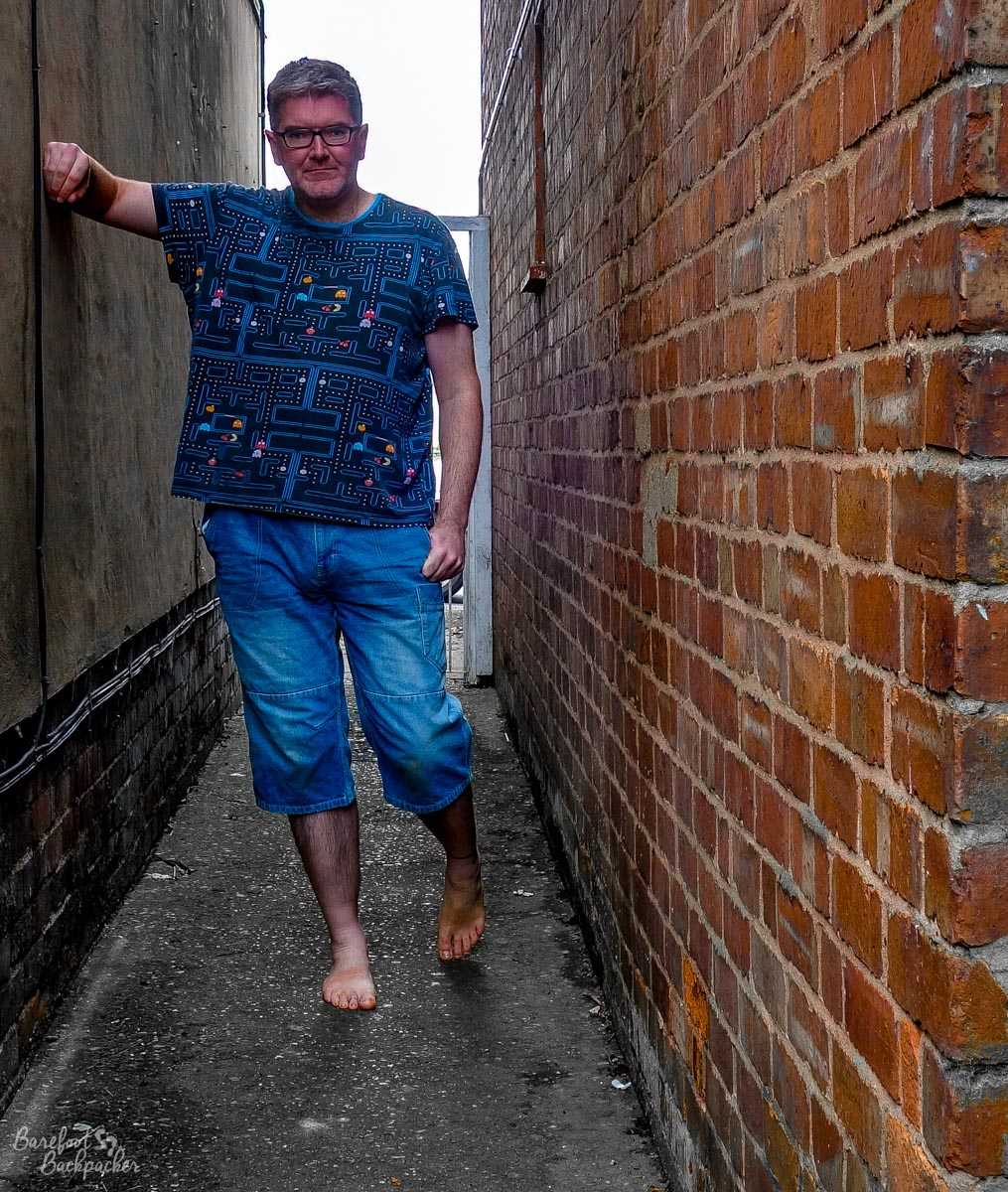 Clothes by Primark. Shoes by Mother Nature. Neither really elegant.

Aaaaand this is why I’m not a fashion blogger!

The main difference though, and where I’ve really thought about where I veer away from the standard travel blogger shtick, is on my blog posts about a certain place. Let’s take my most recent post, about NE England, an area that probably not many people know much about.
When describing a new place to people, most bloggers would give useful tips like how to get there (trains into Newcastle, information about the local metro tram system etc), where to stay, how much things cost, if there are any decent ice-cream stalls (as an aside, there’s a great stall on Whitley Bay promenade but I forget what it’s called. This proves my point!) or restaurants that are worth visiting; useful information that people heading to a place for the first time would need to know. Further to that, they might post a specific blog about 13 Things To See In North & South Tyneside (CamelCase, natch) – again, telling their readers about what’s interesting to see/do, and, in effect, using their blog like a kind of tourist information leaflet.

I … don’t do this. Any of this. I mean yes I’ll obviously talk about interesting things to see in a place, but I do it in a much different way. That recent post about the NE mentioned a handful of small towns, and gave a little information about each one, but pretty much none of it would be of specific use to the casual traveller. Instead I talked ‘about’ the places, the history of Tynemouth for instance, my experiences of Whitley Bay beach, and a brief overview of Sunderland. If you read my post you’d still need to do a lot more research to find out where to eat, and specific details about what to see. 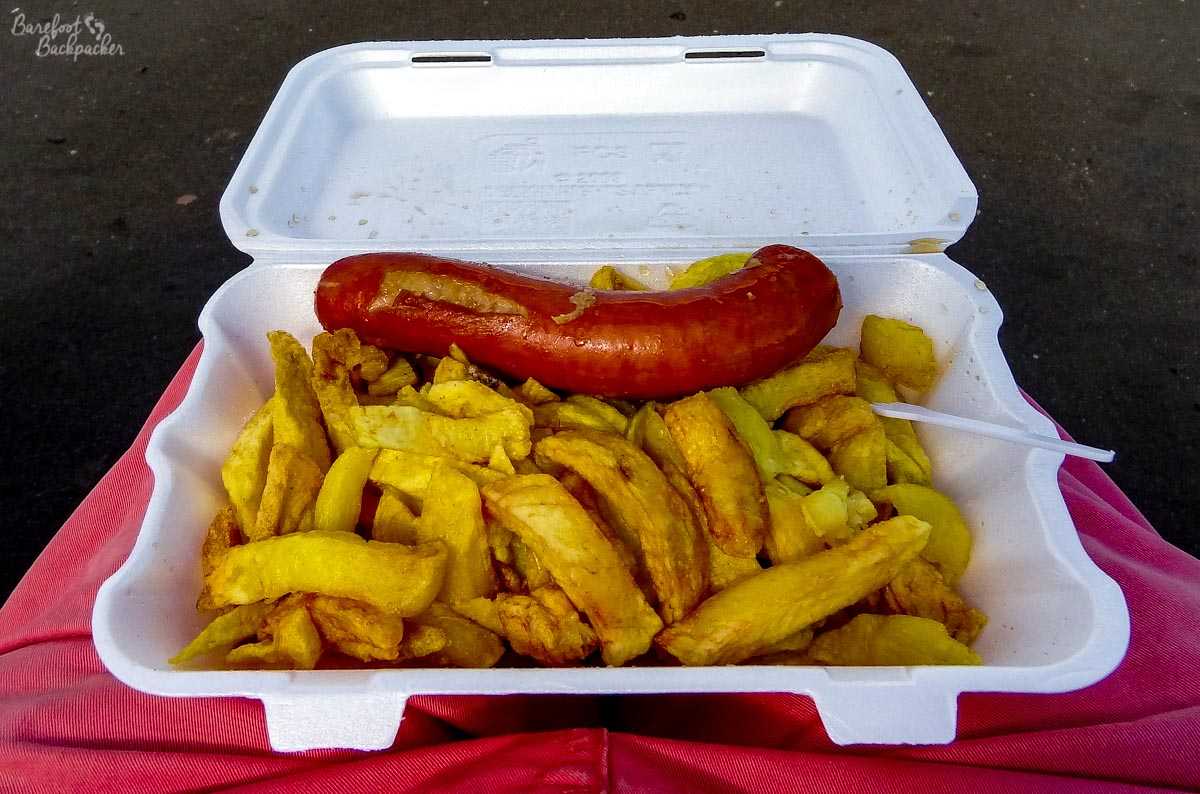 Sausage and chips on th ebeach at Cullercoats. A proper travel blogger would tell you which chippy, how much it cost, and whether it was worth revisiting. I … just eat.

What my post is useful for, and this is true about much of my writing, is to give context to a place. While most bloggers write about ‘what’, I try to write about ‘why’ and ‘how’. While less ‘useful’ to a fellow traveller on a basic level, someone who’s just passing through (although even here they can get excited by the pictures of the places I’ve been), there are a couple of markets I do cater for. One is long-term travellers, people who spend weeks rather than days in a place, people who want to get, to use a cliché, ‘under the skin’ of a place, will be attracted by knowing more about the history and culture of a town, and what makes the place ‘tick’. Another, surprisingly, are locals – I love finding out things about a place that those who’ve been living there for most of their lives didn’t really know; you often find that people don’t pay attention to where they live, because it’s so familiar. 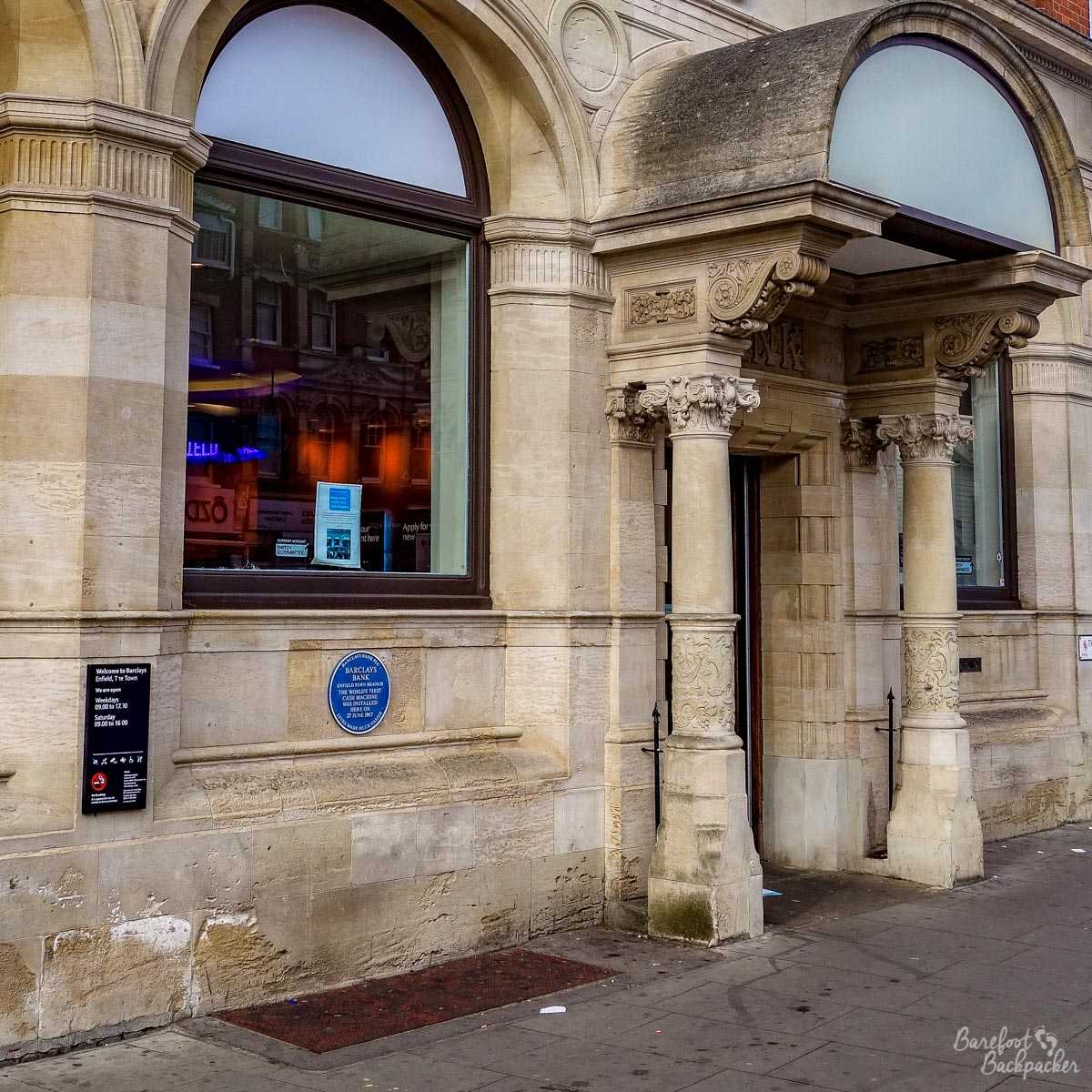 This is the sort of place I discover – the site of the world’s first ATM. Which few people seem to know, even locals.

I’m not saying I never would do Instagram posts that promote a certain product or place, but if I did they’d probably have to be things that fitted with my travel and writing style. I’d never actively promote a hotel, airline, or travel product, for instance (I may have preferences, but I’d feel very uncomfortable taking a hotel stay or flight for free on the proviso of waxing lyrical about it in a post). I would happily work with tourist boards though, but only for places I’d be likely to go anyway – the problem here is often some of the places I really like … don’t seem to have one. I sometimes think that *I’m* the biggest promoter of Benin on Twitter, for instance. 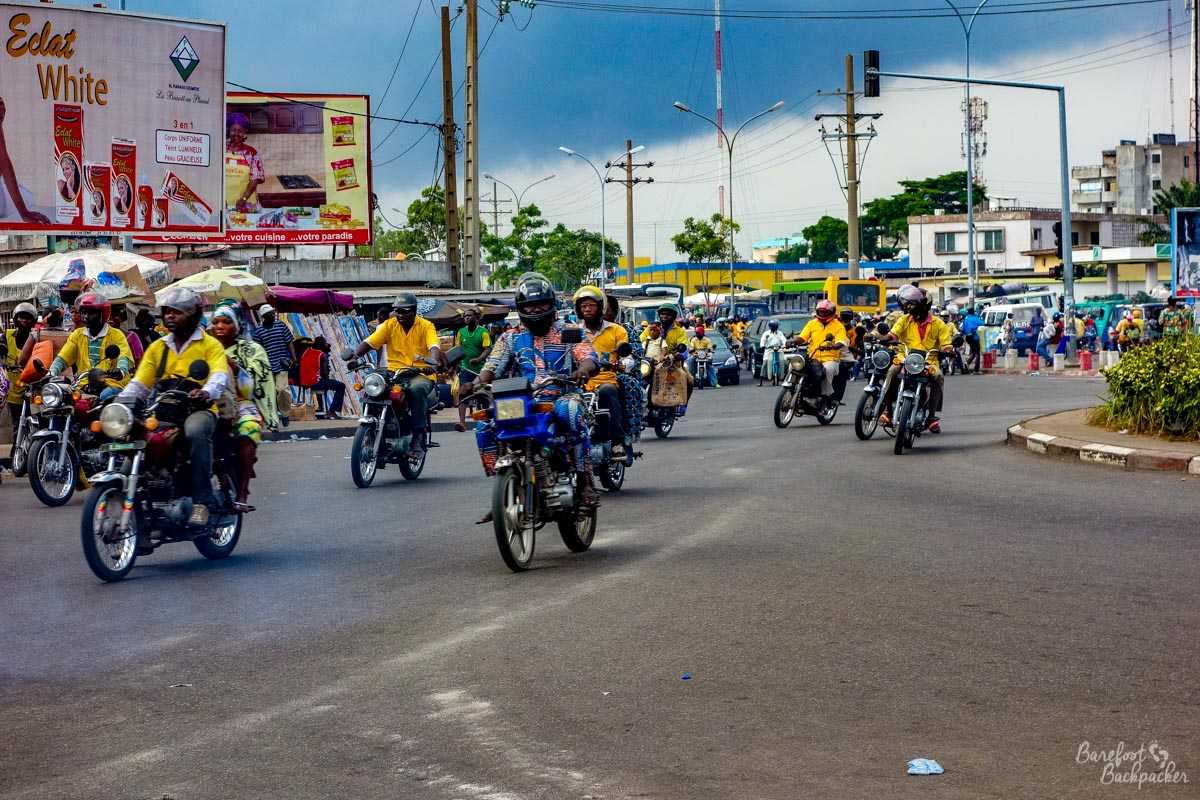 In terms of my writing style too, I think I veer away from being the standard travel blogger. It’s been noted I’m very much less ‘personal’ than many other people – I am more likely to talk about what ‘can be done’, about ‘what happened’, rather than about what ‘I’ did in a place, and how ‘I’ felt about being there. In a sense, I write more like a history textbook than a travel guide. And of course we all love history textbooks (!).

This isn’t as dry as it sounds, however. I don’t know how many of you are aware of a comedian called ‘Mark Steel’. If politics were football, England wouldn’t have any problems on the left wing with him (despite his bloodyminded love of Crystal Palace), but he also writes books and hosts radio shows about history and local places. But not dry books; rather (being a comedian, first and foremost) he imparts his personality into them, and while he talks about big topics (eg the French Revolution), he makes them accessible to the lay audience, with humorous asides and an easygoing manner regarding explanations. I think this is how I write, or at least how I wish I wrote. He’s not a travel writer or broadcaster, but he definitely concentrates on places and events, like I do. Take a listen to any of his “Mark Steel … In Town” recordings and you’ll kind of get what I mean.

I’m not sure where I’m going with this post. I’m certainly not meaning it as a “I’m purer than you” post, because it absolutely isn’t – in a sense it’s harder for me because, with my upcoming redundancy from work in mind, I have to start thinking about alternative income streams, and it seems from the way I blog that blogging in and of itself won’t be one of them. Equally I don’t want people to feel sympathetic or ‘sorry’ for me because this is a path I’ve chosen to go down; it’s always been my choice to write like this! I think I’m more writing this post as a kind of ‘therapy’, and to let people learn more about the workings of my mind, about why I blog and post the way I do.