The journey from home to the B&B took just under an hour and half by car, mostly down single-carriageway country lines weaving their way through rolling farmland. The further North however, the higher the peaks got and the more remote the scenery started to look, until the final road which wouldn’t have looked out of place on a stereotypical Scottish moorland. Sheep were more plentiful by the sides of the road than any people, and other cars were conspicuous by their absence. 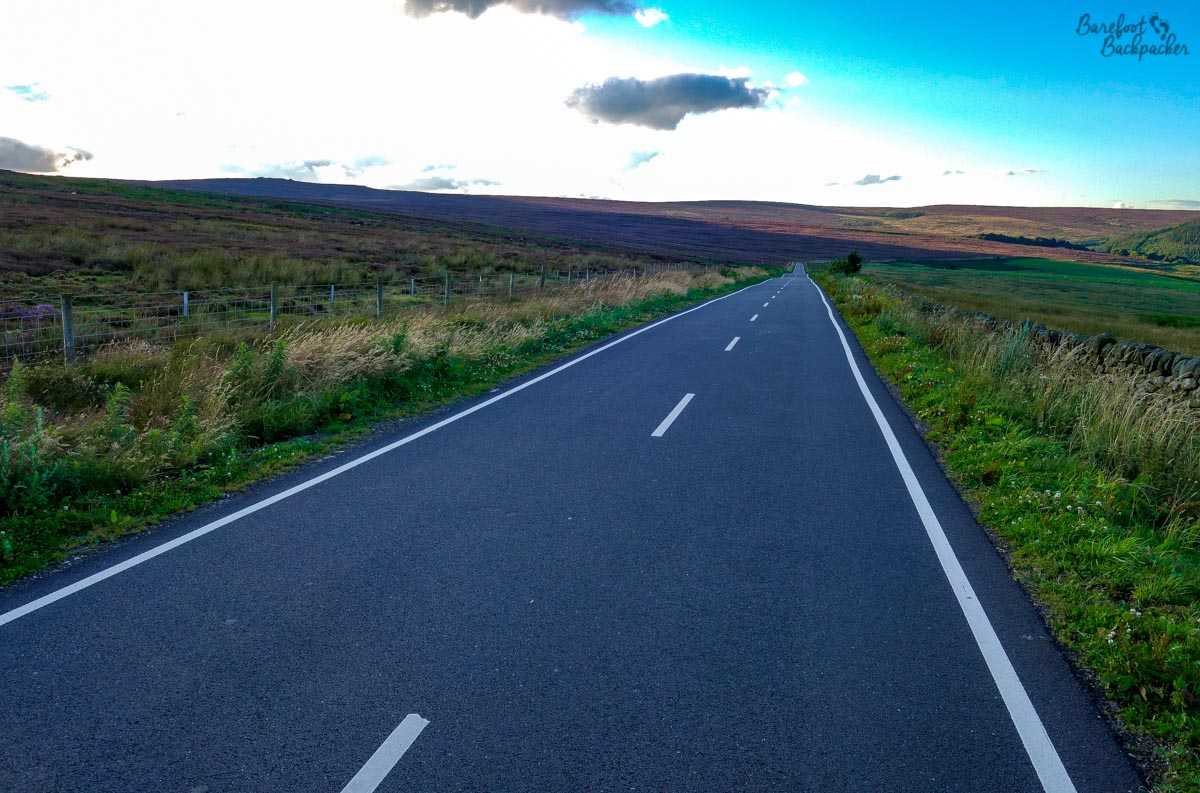 The road up to the Strines Inn. Two miles of moorland – deep in the sticks!

We were headed to a pub/guesthouse called ‘The Strines Inn’, nominally in Sheffield (one of the largest cities in the UK) but in reality in the middle of nowhere – an isolated building in a small stream’s valley, a couple of miles from even the nearest village. We’d wanted to have a nice weekend away somewhere pretty, but when we came to book (yep, last minute, as always), we found that most of the places around us were either fully-booked, or overpriced and pretentious. The Strines Inn, however, looked snuggy and cosy; images on the website showed an old building with an old-fashioned feel, advertising real fires, four-poster beds, a garden full of peacocks, and even a resident ghost. They also had a vacancy, despite only having three rooms, although this may have been because they were going to be closed Monday morning so no-one had wanted to spend the Sunday night there.

Oddly, the online reviews of the Inn weren’t uniformly positive. Many suggested the noise of these peacocks was too loud, others saying the staff were rude and uninterested. There were also a couple of mytherings about the food. That said, some people can never be satisfied, and everyone has different levels about what is acceptable and what isn’t. Granted I’ve stayed in hotels while sharing rooms with lizards and toilets with cockroaches the size of my middle finger, so I’m pretty comfortable with most things. Except wasps, obviously. And I have issues with moths. 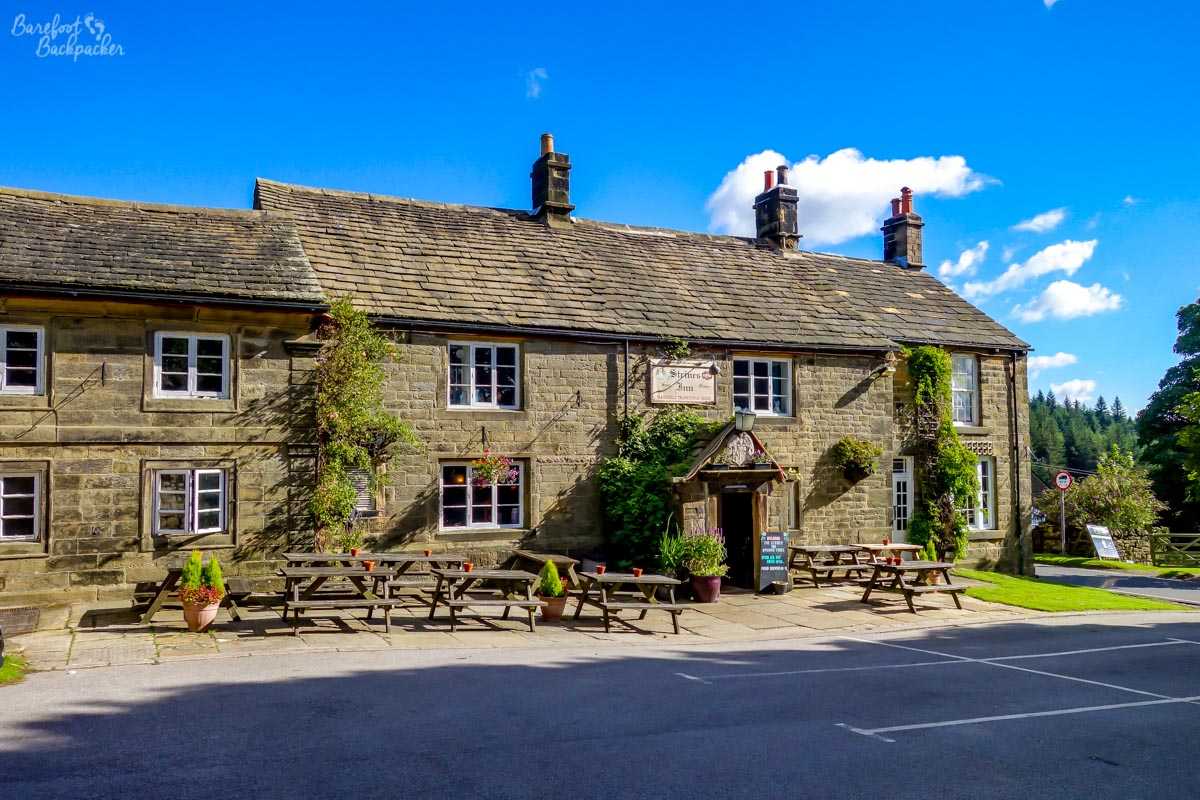 The Strines Inn itself. One lovely old building in the middle of the hills.

First impressions on arrival around lunchtime pretty much matched our expectations; despite (or perhaps because of) its location, it was more popular than we imagined, with couples and families all seated outside, eating and chatting. It was also popular with bikers – the road it stands on seems to be a popular motorbiking route (and with good reason too). The advertised peacocks were in residence, milling around as if they owned the place, coming alongside the tables and sniffing about. (I’m actually not quite sure what peacocks do; do they ‘sniff’? Or just strut around with an air of snobbery like some kind of 18th century gentleman?). Contrary to the reviews, once we reached our room (which was directly above the front door and consequently were most of them were currently hanging out), we could barely hear them – like background birdsong. A shame the same couldn’t be said for the small child in the car on our second evening … 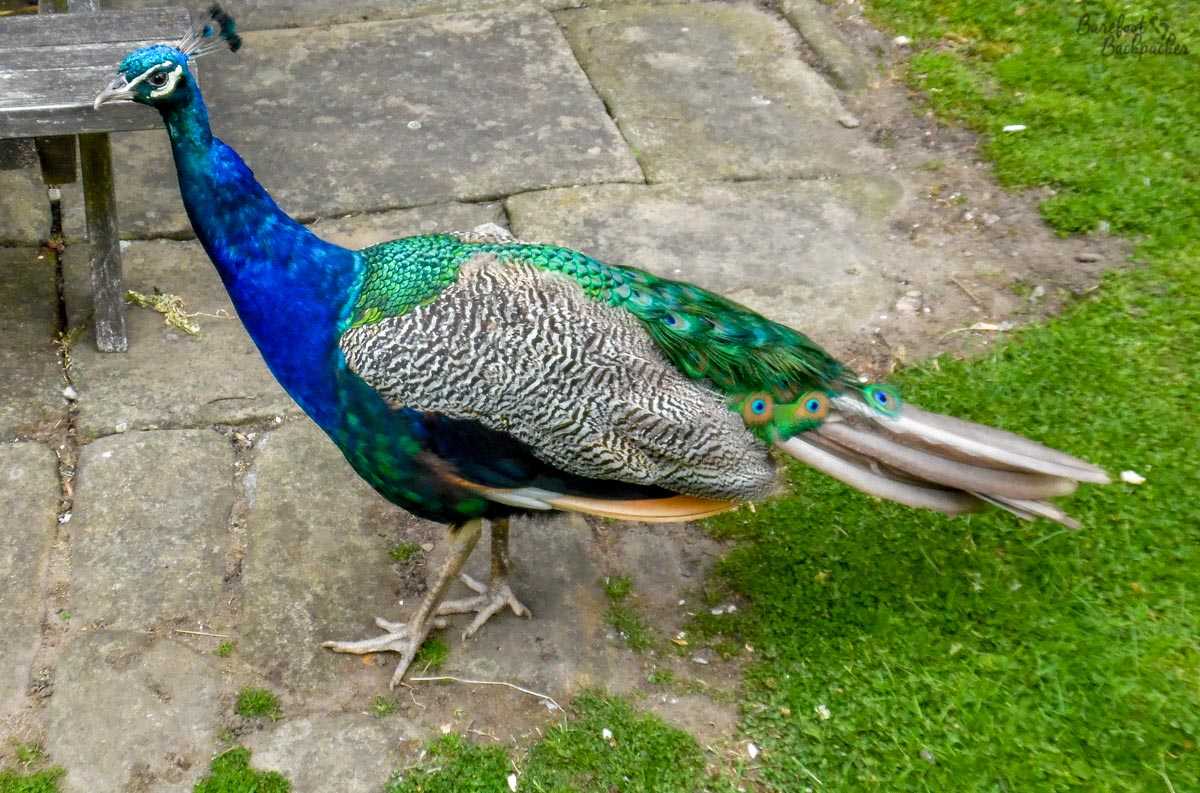 A peacock outside the Strines Inn. Although there were quite a few of them, they really didn’t bother us, and were quite cute when they tried to climb the tables.

If anything, the overall setting was even more picturesque than the images we’d seen on the site – while the building was as shown, the pictures failed to really give any sense of the scenery surrounding it. Even from our room we could see the road disappearing in a swathe of trees, with mountain peaks off to the left; from outside the whole vista of this part of the Peak District was laid out in front of our eyes. Over the road the land sloped gently down through some fields to a reservoir, whilst in the other direction the land rose quite sharply to a small ridge just beyond the edge of the childrens’ play area.

The room itself was extraordinary. The first observation we had was the size – far bigger than pretty much any room I think I’ve stayed in before. The centrepiece was a large 4-poster bed, covered with vintage bedding and surrounded by voile canopies. The bedding itself was quite thick, and in a basket near the window were two further snuggy blankets. We stayed in August, so we didn’t need it all, but one imagines the bed to be very warm and cosy in the height of Winter, which no doubt will hit hard this far in the Peaks. Additionally, on one wall was a little fire which again we didn’t use but almost certainly would do later in the year. The only slight concern about the bed was that with the thick mattress and all the bedding, you were sleeping a little higher from the floor than most people are used to – something to be aware of if you fall out the bed maybe. 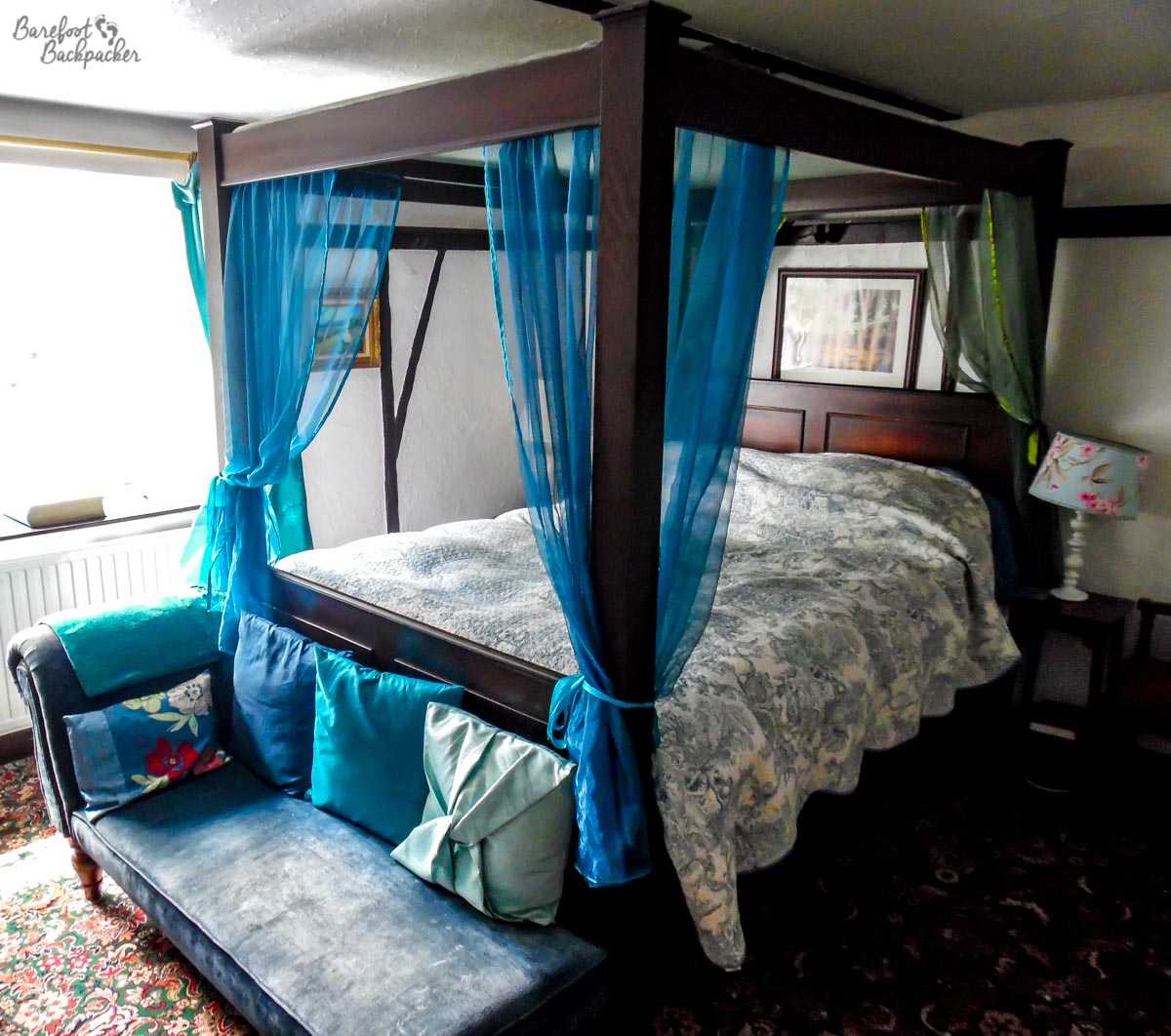 It’s been a very long time since I’d been in a 4-poster bed. No, we didn’t, in case you’re thinking it.

At either side of the bedhead was a small table with a lamp (other parts of the room had their own lighting features); at the foot of the bed was a nice chaise-longue with a blanket, while nearer the fire was a small table with two chairs – ideal for a nice romantic meal. The room had a TV, hidden away in an ornamental cabinet, on top of which was a tray with little jars of coffee and hot chocolate, and a crystal cannister with fresh water. While many hotels have similar amenities, what makes them notable here are both their ‘period theme’, matching the decor and adding further ‘homely’ touches, and that they were of pretty good quality. 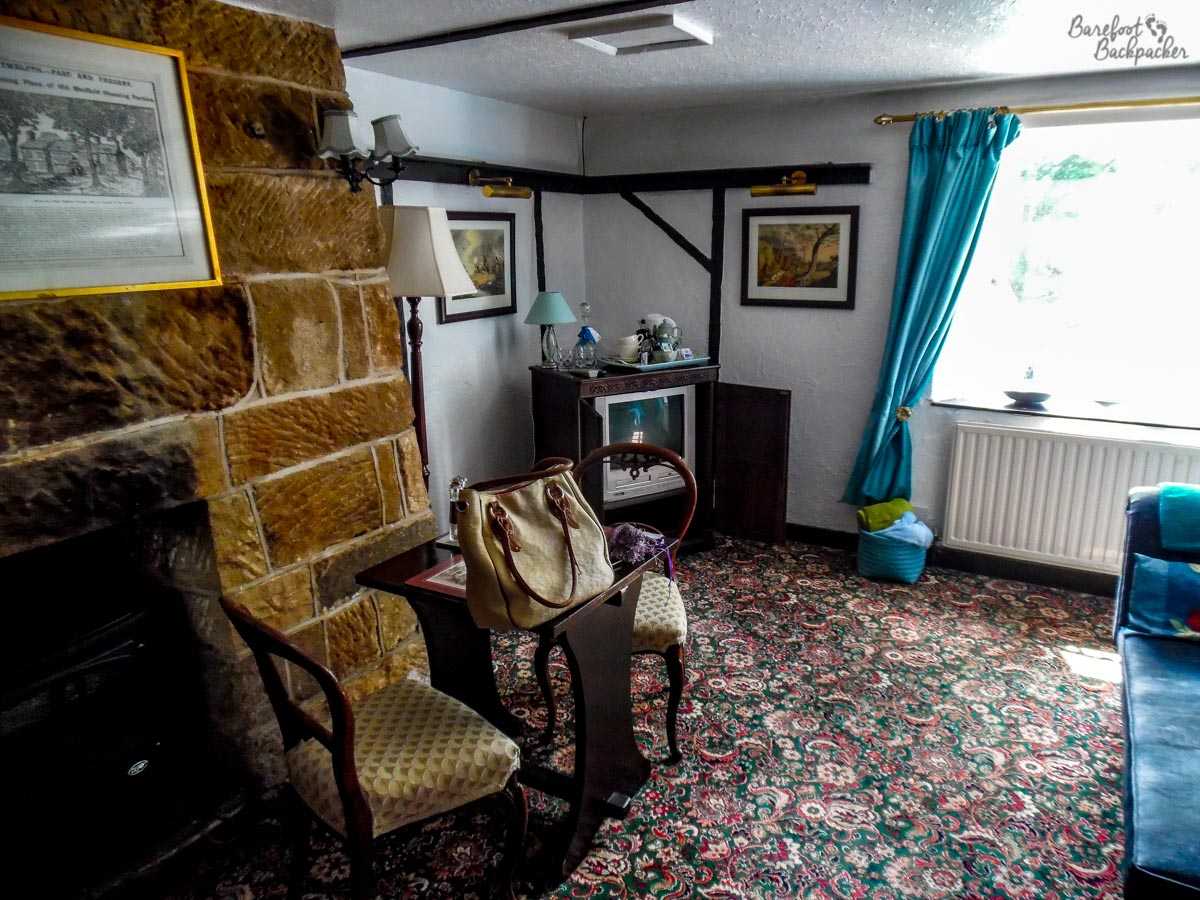 The bedroom, showing the table and the TV cabinet. 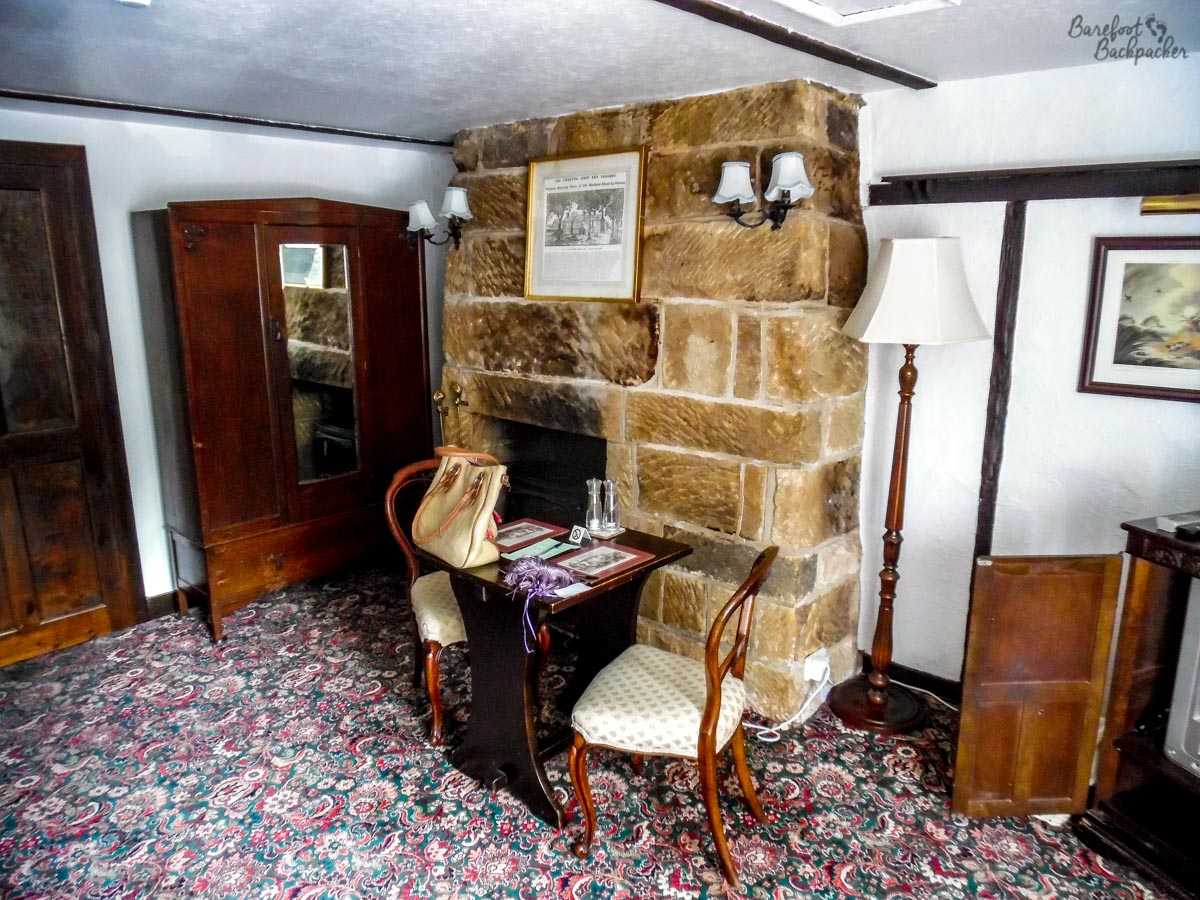 The bedroom, showing the table, the fireplace, and the wardrobe.

The room had an en-suite bathroom, which disappointingly was a bit more modern and lacked the overall vintage character of the rest of the room. That said, the attention to detail was maintained, with good quality towels, shampoo, and bubble-bath all provided. The only thing missing to make it perfect was a shower attachment.

As mentioned above, noise levels from outside were fairly minimal – it was actually quite soothing to hear the murmur of chatter from the bar below, but even that receded as the evening passed. In fact, the bar closes when they run out of people to serve, rather than at any specific time; since it’s 2 miles along a country lane with no streetlights, once it gets dark the number of visitors drops sharply – even by 9pm the only people there seem to be guests staying over.
It’s even possible that the guests are the only people in the building overnight, as the owner seems to live in a nearby cottage. One thing to be aware of in Winter is that the pub is closed between 3-6pm. This is important to remember as there’s no exit or access available while the pub is closed – so it’s also not a place to be able to saunter back to after a night on the tiles in Sheffield!

Food was home-cooked on site – it was easy to tell just by looking at the home-made chips (that’s fries, not crisps, but thick roughly-cut wedges of potato) that tasted as good as they looked. Main meals were served until 9pm, and were uniformly large – even the side salad was much bigger than we’ve found at most pubs. The menu was a reasonable size, but there was also quite an extensive ‘specials’ board to choose from. They also did bar snacks in large ramekins, and there were four real ales on tap.
Breakfasts were another thing again – included in the price of the room, we had to pre-order it the night before, but we could choose to have it either in the bar area, or have it brought up to our room for a particular time (the window was quite small, 7.30am-8.30am). We opted for room service, and it arrived pretty much to the exact minute we ordered it. Like the main meals, it was large and very tasty; it included amongst other things thick bacon, sausages, grilled tomatoes, fried bread, and toast with marmite and jam.

We were unfortunately only able to have breakfast on the Sunday morning; I mentioned above they were closed on the Monday morning. This was due to a family issue meaning that they didn’t have any staff on site. Initially they said we couldn’t stay on the Sunday night at all, but after a bit of discussion they allowed us to stay over, as long as we understood that breakfast was unavailable and that we had to check-out by 8.30am at the latest. In return, they gave us an unexpectedly large discount on our second night in return.

The bar and restaurant area covered most of the downstairs, and was divided into three ‘rooms’ – the two either side being mainly places to eat, with solid tables under old-style wooden beams, decorative trinkets on high ledges around the room, and small fireplaces. The central room was the main bar area, and housed and enormous real fire that in colder weather would presumably make the bar very inviting indeed. 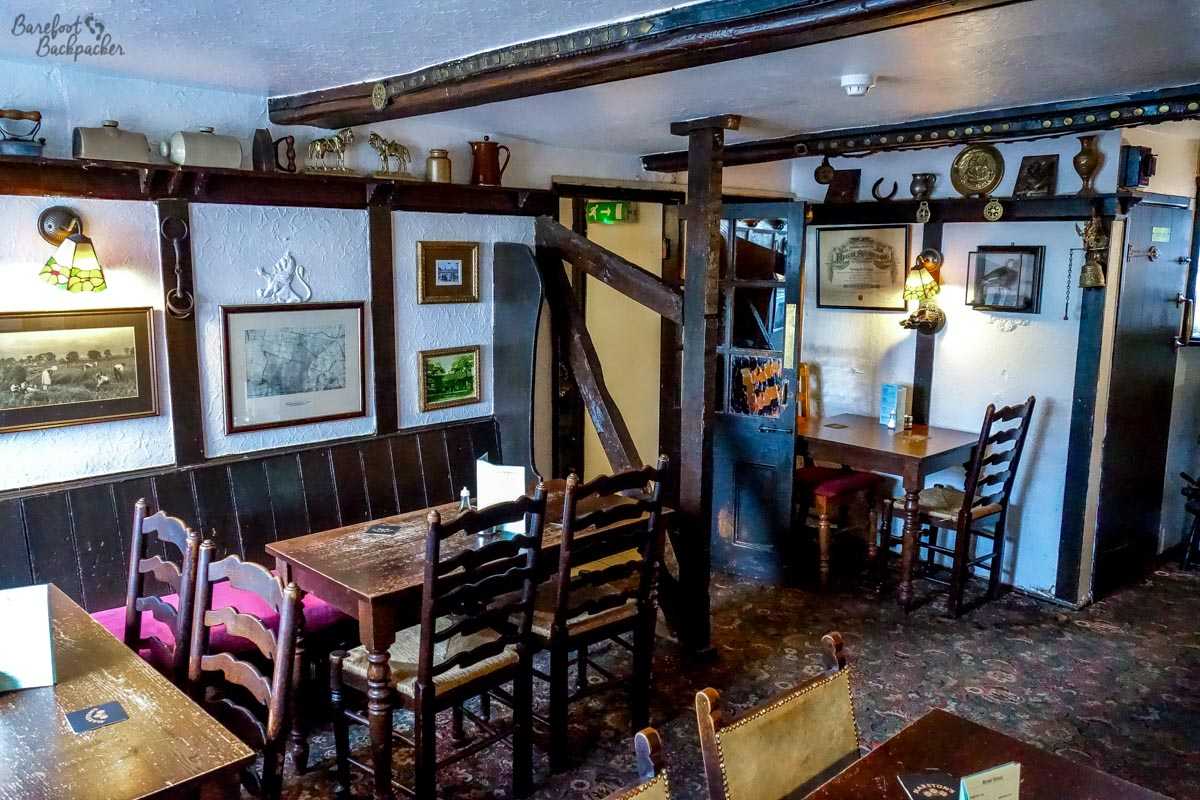 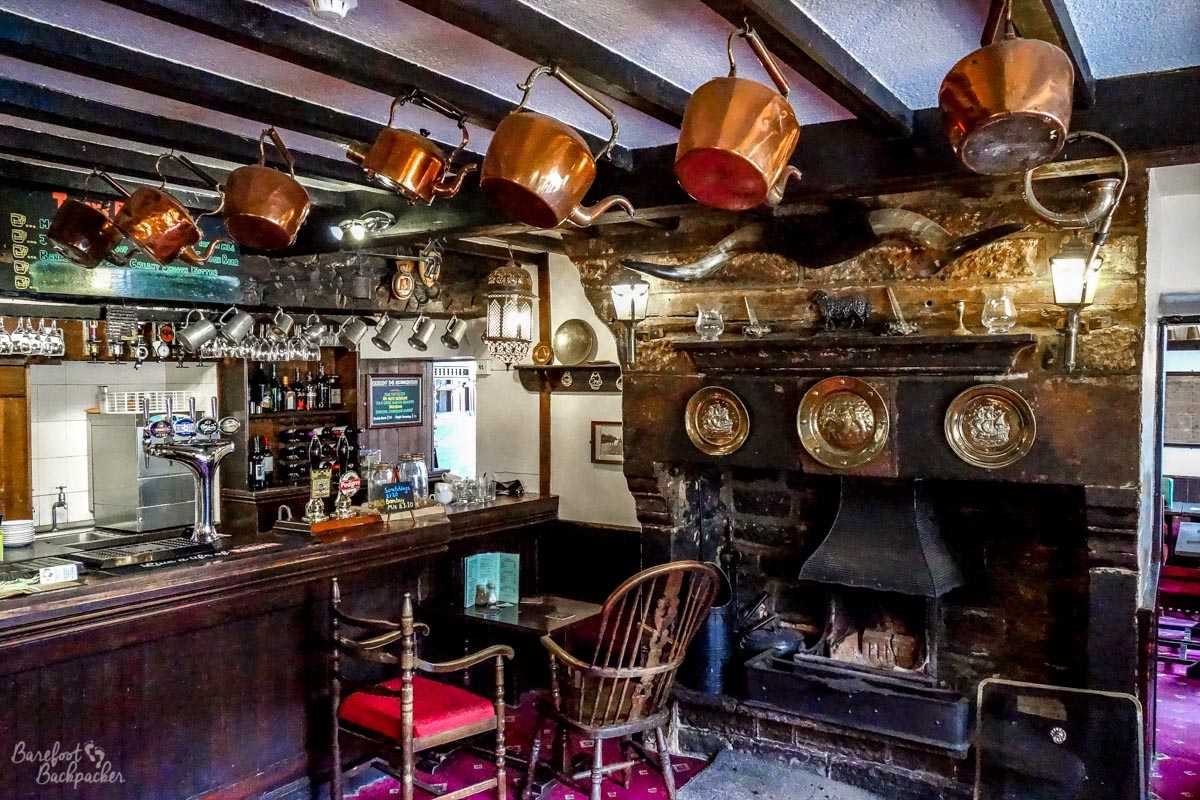 The bar area, showing the fireplace. 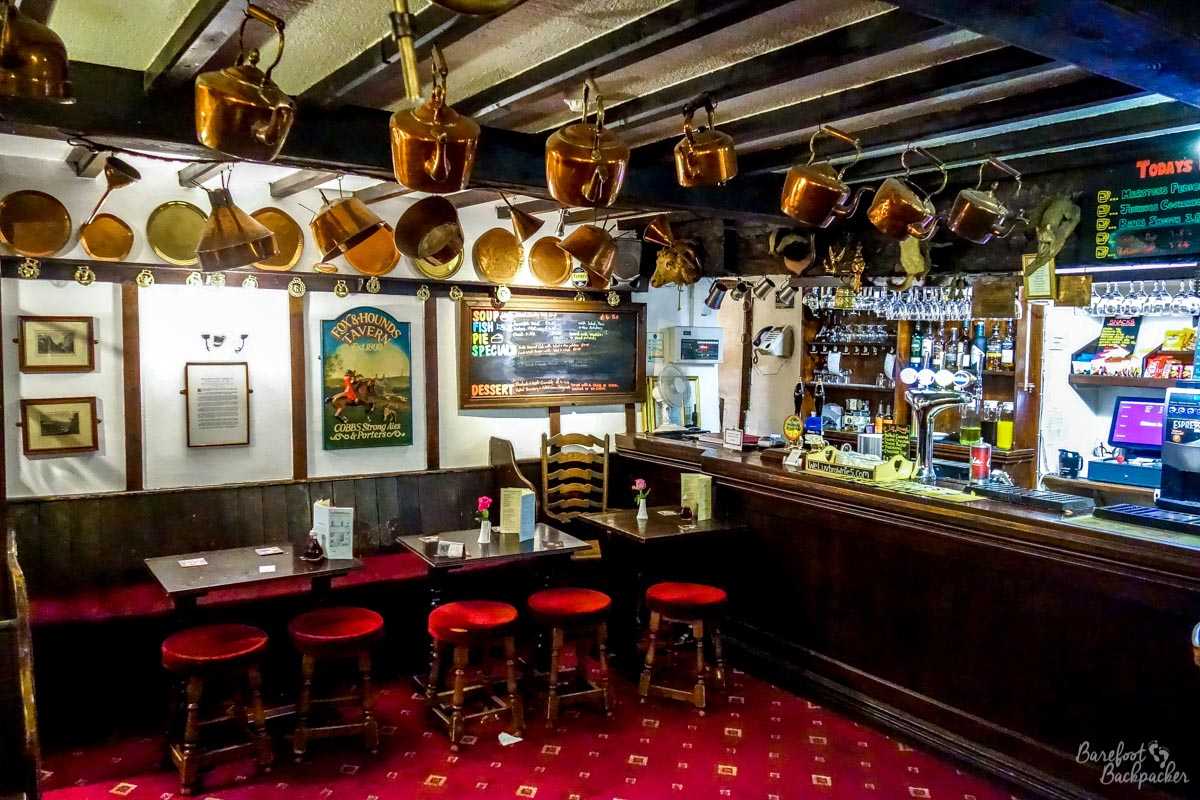 The other side of the bar area. 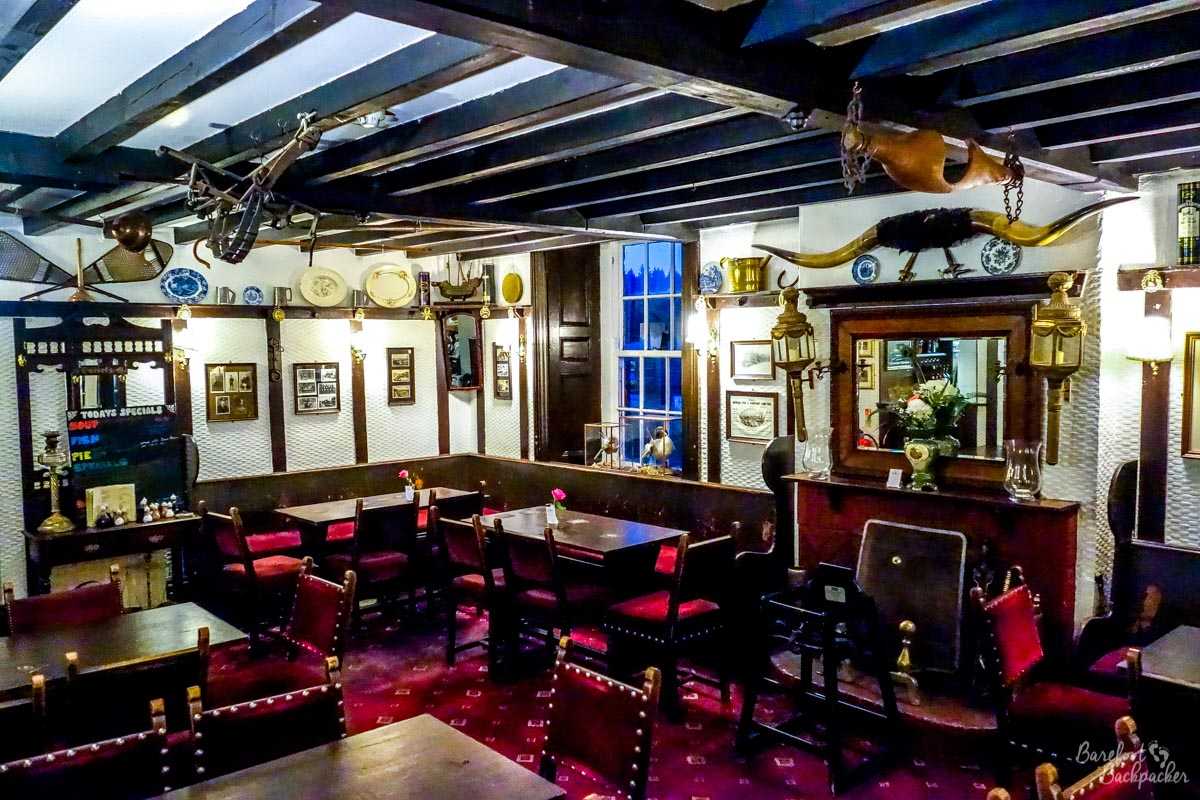 For somewhere so remote it was cheaper than we expected. While a very nice spot, it would be tricky to get to without a car (the nearest bus stop as far as we could tell was 2 miles away on the A57), but a very pretty location in the Peak District, close to a number of reservoirs and trails over the mountains, so definitely an ideal base or stopover for hikers. Conversely, Sheffield city centre was only just over 10 miles away; once you hit the A57 it’s a fairly easy drive there.

One thing to be aware of is that there was virtually no mobile signal at all (there is a payphone in the bar that you could use), and of course no wi-fi either, making it a perfect place to get offline and do something in the real world. Just remember to take a map …

The most disappointing thing about our stay? We never did see the promised ghost … 🙂