This is my walk to work every morning.

Bentinck Banks and Portland Park, Kirkby-in-Ashfield. This area is now a Site of Special Scientific Interest.

Even during my lifetime (but long before I ever came here) this view would have been substantially different. This whole area would have been railways – both goods and passenger lines passed through here; in the foreground the footpath was the main Great Central Railway line taking people from Nottingham to Sheffield, whilst on the right of the image would have been a whole mass of freight railways mainly serving Bentinck Colliery (coal mine).
In addition, there would have been several junctions serving other railways – there was at least one other way of getting to Nottingham from here, one line to Derby, and as far as I can tell, two routes to Worksop (one via Mansfield, the other via Sutton-in-Ashfield). Despite being a small mining town nowhere significant, Kirkby-in-Ashfield had three railway stations.
This whole area would have been throbbing with power: noisy with machinery and train working, smoky with steam engine and coal dust, part of the work-intensive heart of industrial England.

In fact, this was a microcosm of the entire East Midlands. Villages and towns sprung up all over to serve these mines and the associated industries. Victorian brick-built terraced houses appear seemingly out of nowhere, at first hidden from view amongst the small, grassy hills and these days often quite distant from any other indicator of civilisation but which, when built, were next to a mine, a railway, a canal, a processing factory – true one-industry villages. 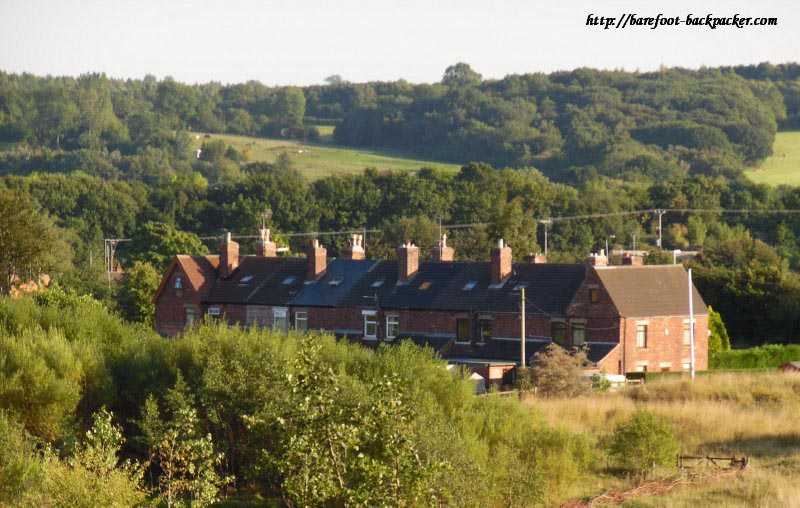 Row of cottages in Fackley, serving Silverhill Colliery, near Teversal.

While coal and rail were the most obviously-seen industries, the area saw a plethora of manufacturing. Sutton-in-Ashfield was a small hub for, of all things, hosiery (‘Pretty Polly’ were based there, before moving into Belper, in Derbyshire, in the early 2000s), whilst nearby Hucknall had an airfield with a Rolls-Royce engine test centre, and was the site of very early work into vertical take-off/landing planes – (there was, until recently, a pub in Hucknall called ‘The Flying Bedstead’, named after the initial test plane. As far as I’m aware, it’s now a small Co-Op Supermarket).

This close-working also fostered a sense of community, and one of the most popular ways this manifested itself was through sport – often the two went together, as is evidenced by the names of many football teams named for the local factory or coal mine (indeed in 2015, ‘Linby Colliery Welfare’ still play in the same league as ‘Hucknall Rolls Leisure’, the old Rolls Royce works team).
One of the more notable sportspeople from the area was Hucknall’s Ben Caunt. He was one of the leading boxers of the early Victorian era – boxing in those days being bare-knuckle and with no prescribed time-limits, ending when one boxer was knocked out. Boxing was a popular event amongst local communities, fostering local rivalries (Ben fought Nottingham-based William ‘Bendigo’ Thompson three times, on all three occasions the actual fight ended with both sides’ supporters doing battle with each other) and the sport obviously lent itself well in an area of hard manual labour. 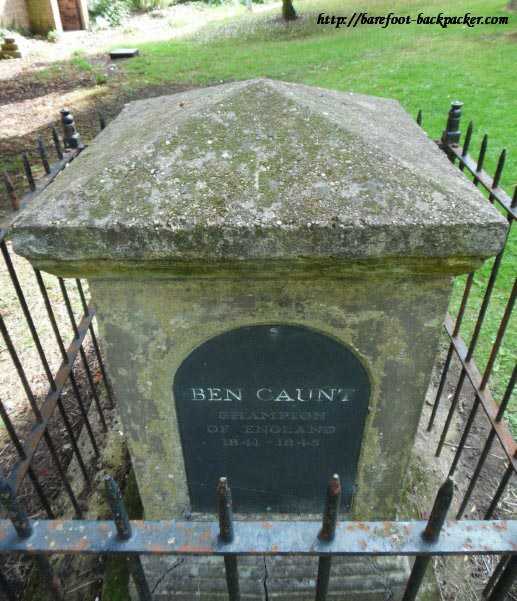 Ben Caunt was so famous that it’s believed that the iconic symbol of London (and, by inference, of the UK as a whole), the sound of the bell inside the Houses of Parliament, is named after him. As a fighter, his nickname was ‘Big Ben’ due to his size (he would these days have been considered in the ‘Heavyweight’ class, ‘Super Heavyweight’ if he were a modern amateur competitor), and due to his fame, the epithet ‘Big Ben’ was commonly given at the time to similar ‘large’ examples of a certain type. Owing to the fact the bell cast for Parliament was pretty large compared to, say, church bells, the nickname stuck.

Two ‘memorials’ to Ben Caunt. On the left is a reproduction of period posters of his fights (on a Hucknall mural-of-fame hiding a derelict building, classy!), on the right is a floor plaque in Hucknall’s market square, again along with other famous Hucknall residents.

Kirkby-in-Ashfield’s most famous sporting hero of the Industrial era came almost a century later, and interestingly was also associated with violent undertones, but in a sport not commonly associated with anything other than traditional English reserve and fair play. 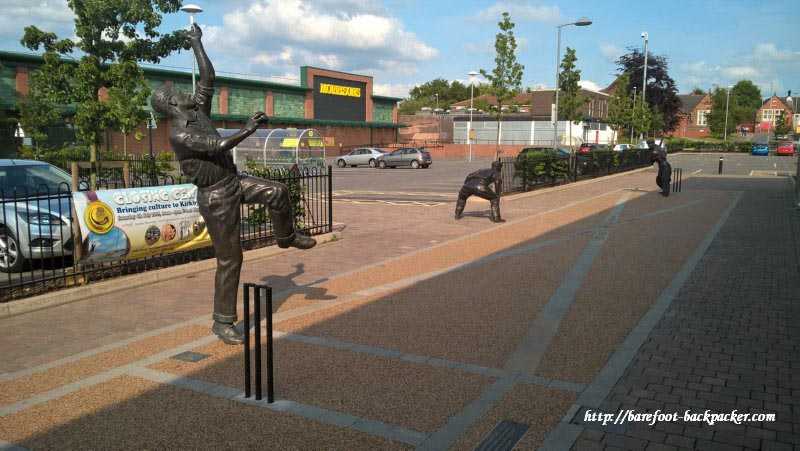 Statue of Harold Larwood bowling at the Australians, in front of the Library in Kirkby. I believe the statues were sculpted by Neil Andrew. The gap between the bowler and the batsman is exactly a cricket pitch.

Harold Larwood was a cricketer in the 1920s & 1930s; a fast bowler in the days when ‘fast’ meant lower order batsmen were genuinely frightened at the crease (although lacking accurate technology, it’s been inferred from analysing film footage that he could regularly bowl the ball a shade below 100mph, making him potentially one of the fastest bowlers ever). In addition, he hit his peak at precisely the wrong moment; his abilities meant he fitted perfectly in the strategy for England’s cricket tour of Australia in 1932-33, the so-called ‘Bodyline’ test series (the Cricinfo website describes it as the ‘never-to-be-allowed-to-be-forgotten’ series’), where the English bowling was aimed directly at the Australian batsmens’ legs, rather than at their bats. England won, the diplomatic fallout from the series almost reached government levels, and Larwood never played for England again, despite becoming an even better bowler in the mid-30s.

He was born in the mining area of Nuncargate, and started out working in one of the local coal mines, apparently leading/guiding the pit ponies who transported the coal from underground to the surface. This work at an early age (around 12-13) obviously meant developing upper body strength, especially in the arms, which served his future cricketing career well.
Ironically, long after retirement, he emigrated to Australia, and was surprisingly well-received. 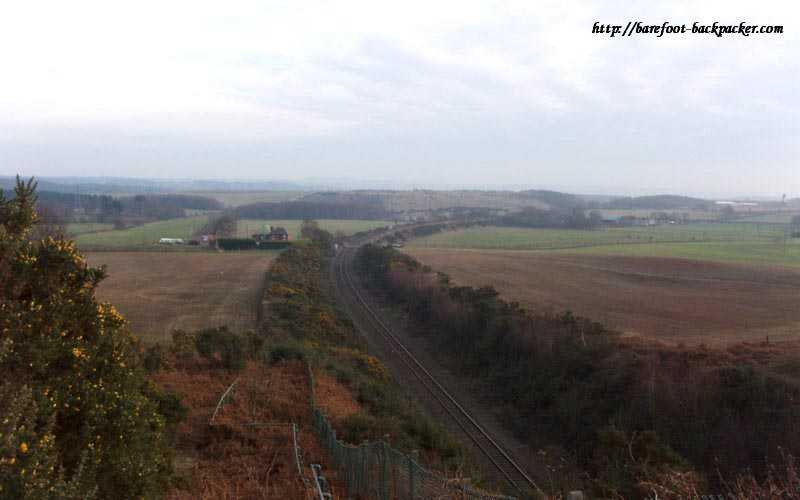 View heading South along the railway towards Newstead. The tall structure in the distance on the right is the old Annesley Colliery headstocks, now since demolished and replaced with housing.

Of course it’s all pretty much gone now. Bentinck Colliery finally closed and the shafts sealed in 1992 and its site, like that of several other coal mines in the area, is now a business park. The railways have long been closed, the rails removed, and most of them now have a new life as footpath / cyclepaths. Of Kirkby’s three railway stations, all had closed by the late 1960s, a totally new station only being built in the mid-1990s when the government started realising the advantages of rail commuter traffic. Of the freight lines, only one remains open, hauling occasional goods traffic from north of Mansfield to the East Coast Main Line avoiding Nottingham, and providing a diversion in case of any incidents or workings on the Nottingham line. 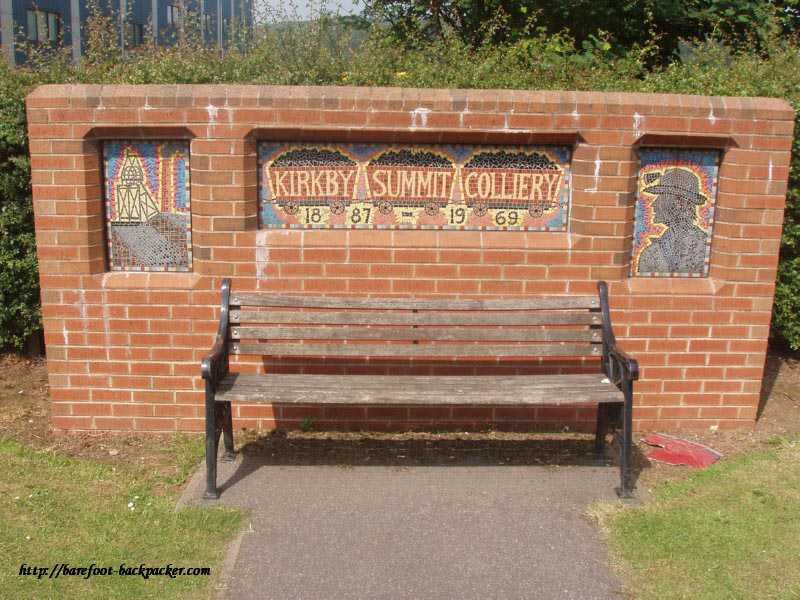 A mosaic sited near the site of Summit Colliery, Kirkby – now a Business Park. 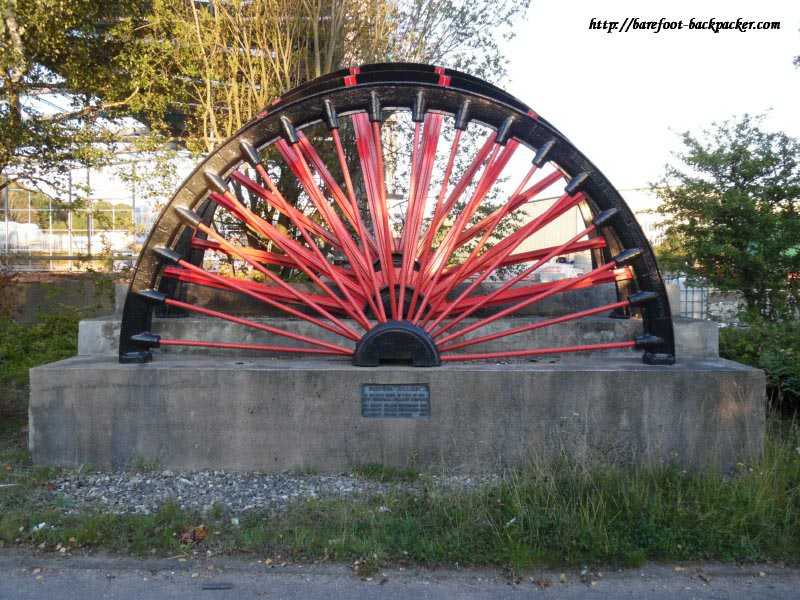 Example of the ‘mining wheel’ memorial typical of the area – this one commemorates Bentinck Colliery, in Kirkby.

Most of the old pit villages have ‘memorials’ to what was there before – usually a stylised ‘mining wheel’, representing the wheel at the top of the headstocks that dominated the landscape and became an iconic symbol of the mining industry. In terms of the community, for many years after closure there was no real replacement work – many of the areas around Ashfield now rank high up in governmental indices for benefit claimants, long-term sick, and child poverty. 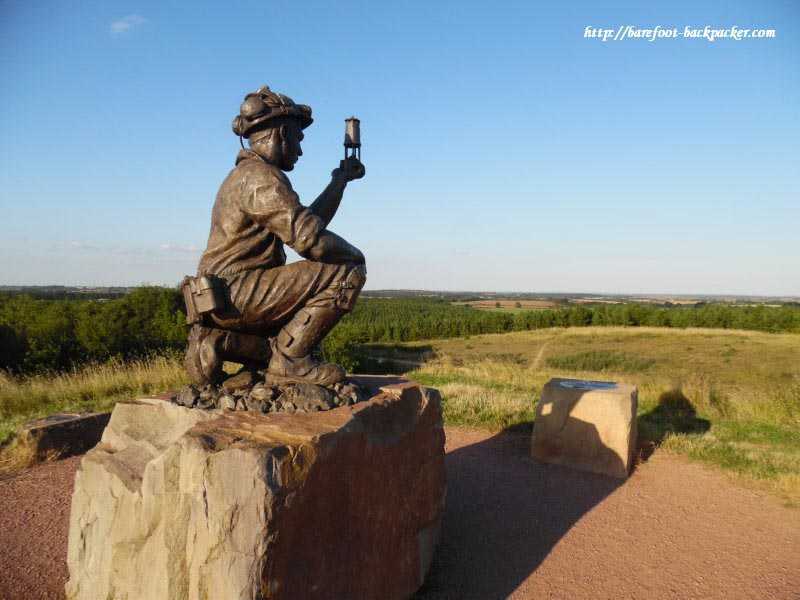 “Testing For Gas” (statue by Antony Dufort) at the old Silverhill Colliery (now a country park). It represents all the miners and collieries that have ever been in Nottinghamshire; the statue is of a miner making sure that the mines are safe to work in – gas explosions were unfortunately common.

The business parks provide some relief, although many in the wider mining area are either small-scale, or dominated by one or two larger businesses, or at least business types (in Nottingham, the old Cinderhill colliery is now ‘Phoenix Park’, a business estate primarily occupied by energy company E.ON, whilst in South Yorkshire the old Manvers coking plant in Wath-upon-Dearne is now covered in huge call centres). Certainly within Ashfield itself, some of this incoming industry has been attracted by artificially low business rates and land rent costs, as the local council has actively tried to entice investment.

Some old mines (eg Annesley Colliery) have been turned into housing, others into landscaped parkland (Silverhill) but many more stand idle, fenced-off edifices crumbling over time, partly demolished, partly just left to ruin, while no-one knows what to do with them. Some headstocks have been purposely saved as reminders (eg Brinsley), but others just stand, forgotten, waiting for the end-of-shift whistle that will never come. 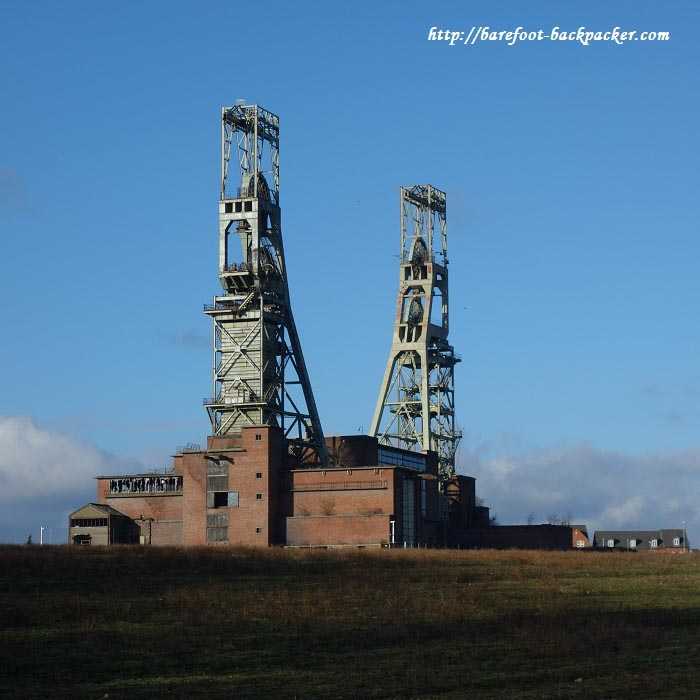 The headstocks at Clipstone Colliery. The subject of several planning applications, they still stand like a beacon on the skyline.

There is still some spirit here; Ashfield is potentially in perfect commuter country (not just for Nottingham, 12 miles South, but Sheffield’s less than an hour away and, given both the rail links and the M1, it’s actually fairly simple to commute to Leeds, Birmingham, or even London), and its current situation means it’s a relatively cheap area; it just hasn’t realised this potential yet.
Sport too is still popular; apart from a legion of footballers, it’s also home to the Paralympic gold-medal winning Hynd brothers, one of whom is commemorated in a golden post-box in the western side of Kirkby. In addition, Ashfield council regularly hosts ‘sports’ events aimed at children, and one of the main schools in the area is a designated sports academy. 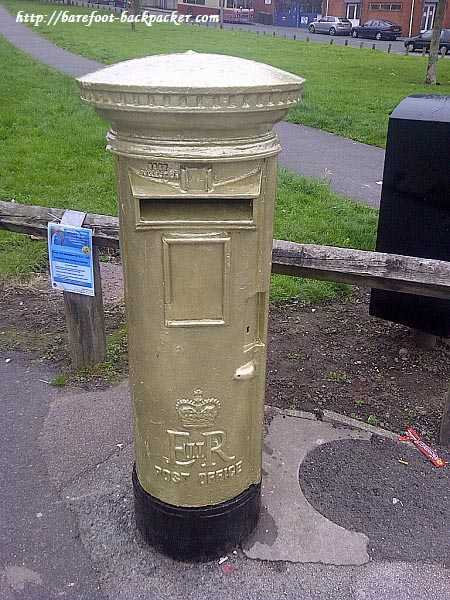 For his gold medal at the 2012 Paralympics (200m Individual Medley), Oliver Hynd was commemorated with this post box, seen here just after initial placement.

In the modern age, however, Ashfield’s biggest claim to fame, and I use the term quite wrongly, is probably that Sutton-in-Ashfield is believed to be home to Europe’s largest sundial. 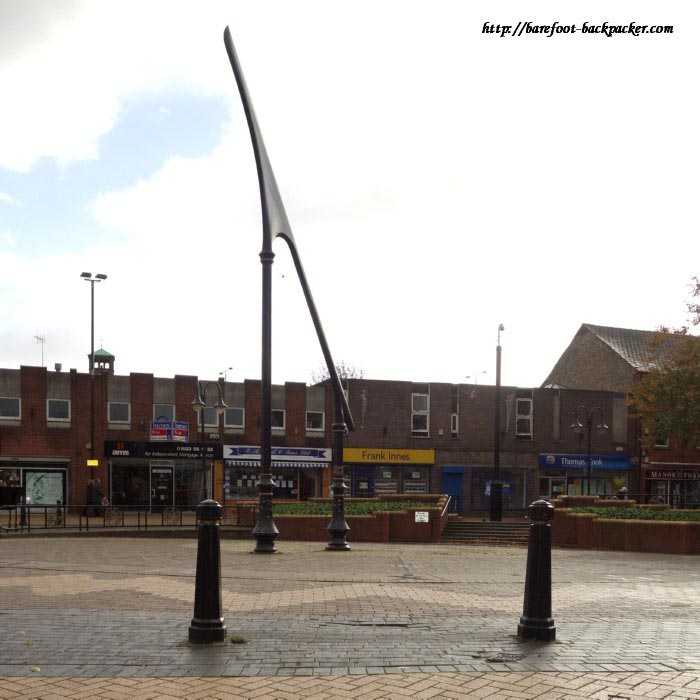 It’s a sundial. In Sutton. Pointless. And badly designed since the shadow of the nearby shops affects it anyway …

Probably not something for Lonely Planet to worry about mentioning …

3 thoughts on “The Rise and Fall of Ashfield District”