As you know, I am “The Barefoot Backpacker“, and as you know, I like to travel around the world. As you may have also spotted, I have an asexual pride flag sewn onto my backpack. But does being asexual change the way I travel; do I have the same concerns as others in the LGBTQI+ community? 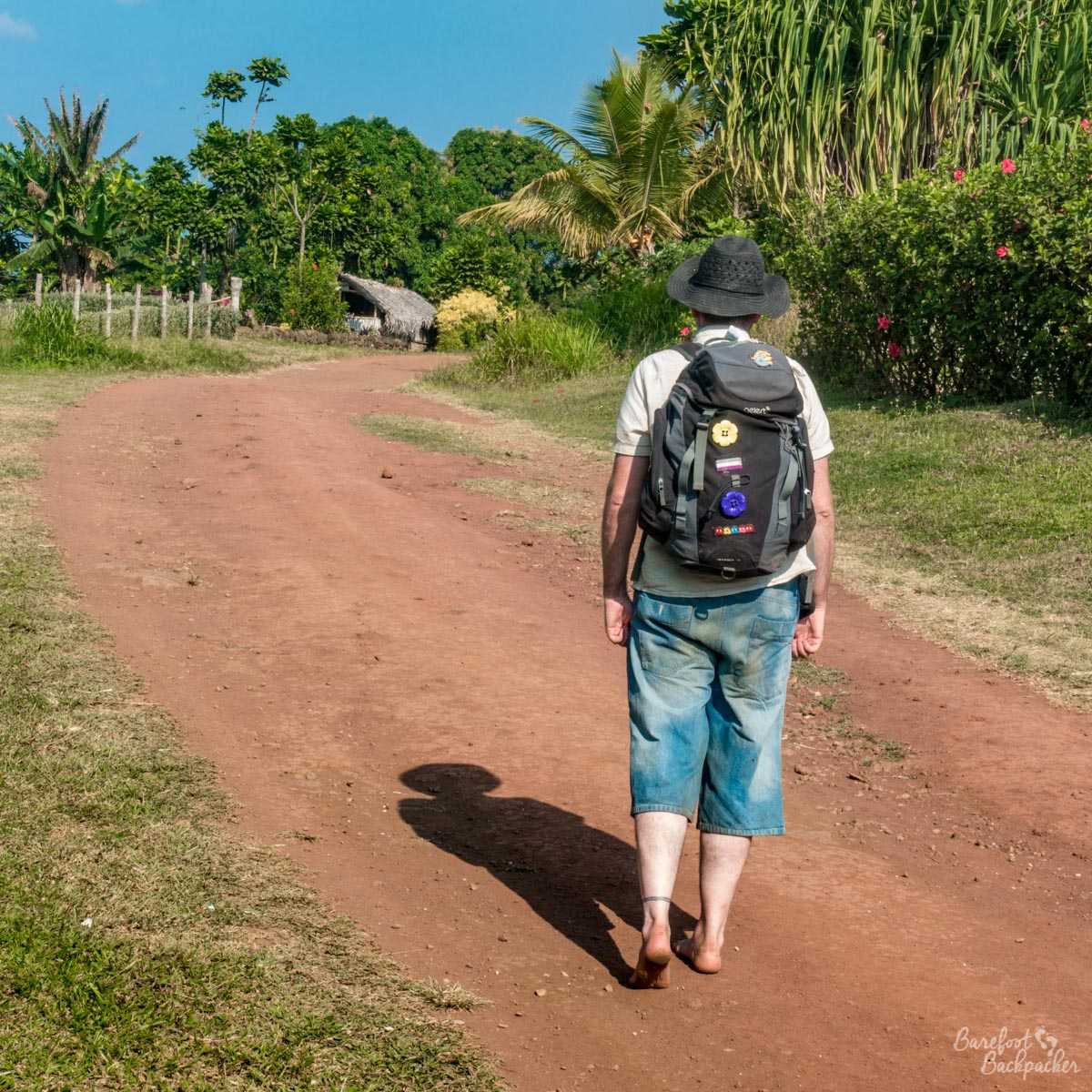 You can just see the asexual flag below the large yellow daisy.

Well, weirdly, compared to other people in my peer group, being asexual has changed my travels in the past, though possibly not in the way you might initially think. The average mid-20something male from the post-industrial heartland of the UK may be tempted with the delights of Ibiza and Ayia Napa [I’m not saying Geordie Shore is representative of a certain demographic, but, well …]; where did I go in my mid-20s? Morocco, China, and small-town USA. Because I’m less sexual than my peers, I never went to those kinds of party party destinations which generally exist to encourage people to drink, dance, drug, and ‘do the do’; they simply interested me less than somewhere with a bit of culture and fewer societal peer pressures.

That doesn’t mean I haven’t travelled with affairs of the flesh in mind. For one thing, I’ve ‘dated’ people in different countries (indeed, different continents) before now, but because I’ve always had penpals and online friends abroad, there’s been very little difference in practice between me travelling to meet them, and me just travelling to meet a foreign friend. In addition, in my travels, I have explored my kinky side, mainly involving meeting random men for tickle and bondage play. But that’s never been the reason why I travel to places; it’s always been something I’ve looked up once I’ve got there, and conceptually aside, most of my travels have been entirely vanilla.

Another side effect of my asexuality is it makes it easier for me to chat to people in backpacker hostels, especially women. Obviously only if they speak to me first – regardless of sexuality, my introversion is by far and away the most important aspect of the way I travel – and to be honest, if I were an early 20-something woman, I’d be somewhat fazed if a weird middle-aged bloke started talking to me first. But that I give over asexual, or at least possibly gay, vibes, means people seem more comfortable talking to me and hanging around me.

However, there’s a reason why my website is a travel/history blog rather than a travel/sexuality blog. When I browse my travel twitter feed, it’s notable not only just how many people identify as gay and lesbian, but also how much they take that aspect of themselves and make it a core part of their travel writing and blogging. It’s not just “I’ve been to this place, oh by the way I’m gay”, it is very much “Barcelona as a Gay Traveller”, or “Things To Do In Berlin For Lesbians”. They also commonly post about safety and politics: “How To Travel Safely As A Lesbian”, “Places For LGBT Travellers To Avoid”, “Things To Be Aware Of If You’re Gay”. There are even specific blog awards in the LGBT community, including things like ‘best travel blog’.

Yet. With regards to asexuality in the travel community, there are no awards for ‘Best Asexual Travel Blog’. There is, as far as I can tell, no-one writing about “Safety Travelling As An Asexual”, or “Best Places To Be Asexual”. It’s almost as if Asexuality doesn’t exist as a separate entity, almost as if asexuals themselves don’t matter.

It took me about two seconds to realise why.

See, Gay Travel is blindingly obvious when it happens. Whilst even friends are more than likely to hold hands in the street, when you’re on a free walking tour and see two people give each other a quick peck on the cheek, it’s a bit of a giveaway. Then of course there’s the whole issue of two people sharing a room.

Two people. That’s the point.
I travel solo. No-one knows I’m asexual just by looking at me. I can’t be discriminated against by the way I look/dress/behave as I don’t ‘appear’ any different to any other ‘normal’ (to coin a phrase) traveller. I can’t be discriminated against for my beliefs since, in a sense there’s nothing to discriminate against. You don’t, by definition, get asexual wedding cakes. You don’t get asexuals appearing to flaunt their sexuality openly in the street – well, in fact you do, but no-one notices because … there’s nothing to notice. As a solo traveller too, I’m ‘practising’ my asexuality just by being there, but no-one sees the difference, if indeed there is a difference for most people. 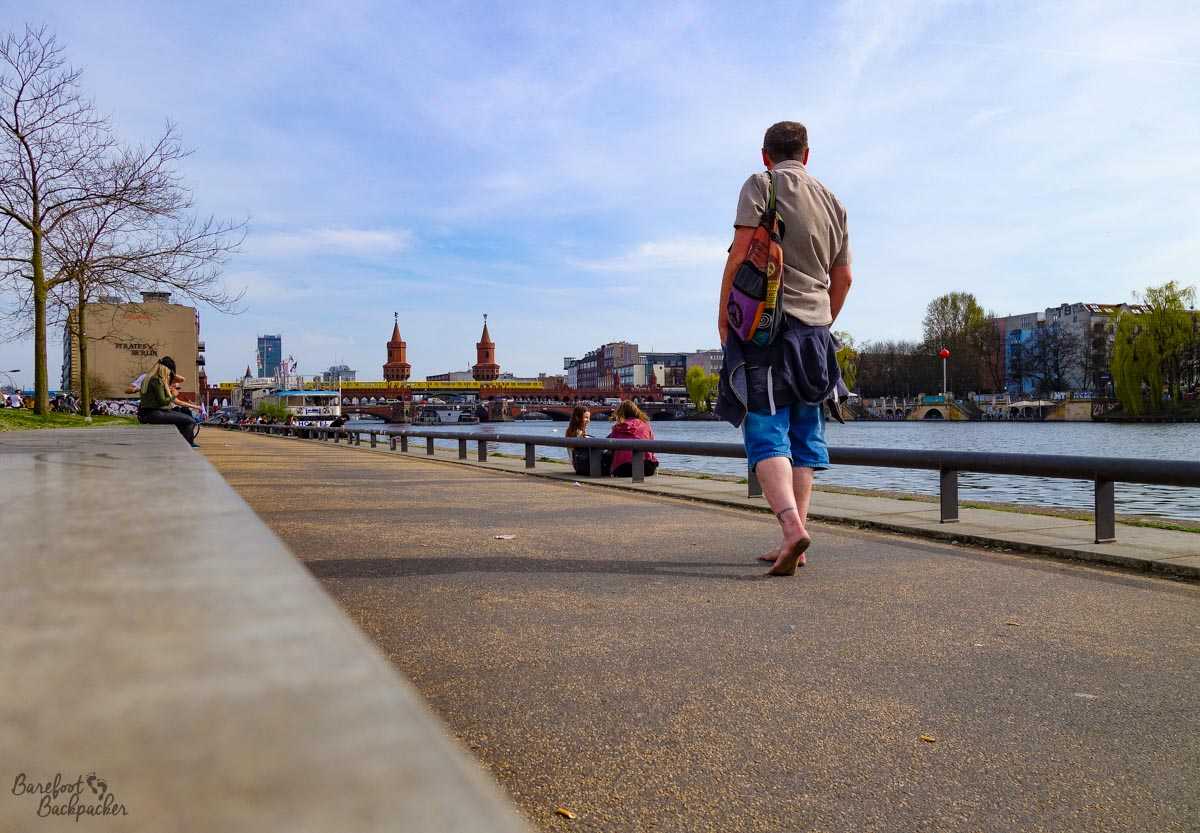 Asexual traveller in Berlin, not appearing any different to a standard solo traveller. Well, at least not in that way.

This means that travelling as an asexual becomes quite easy. There are no issues with safety whilst travelling since, as far as I’m aware, being asexual doesn’t break laws in any country. You can’t legislate against ‘practising asexuality’ since, well, what does that mean exactly anyway? How do you be actively asexual? You can’t, logically, ban ‘not’ doing something (and how would you prove it anyway?!). “Oh, you didn’t sleep with anyone last night; that’s a fine of £200 and 14 nights in jail … oh wait, that’s what you want, isn’t it? To not sleep with someone. Damn….”.

It also means that a travel blog that concentrated on asexuality would be quite … dull. Going to any city as an asexual to do asexual things doesn’t feel any different from going to a city as a standard tourist and doing standard touristy things; there’s nothing I can do as an asexual that would be different. There are no asexual-friendly or -unfriendly hotels, there are no asexual bars where asexuals can go to not hook-up, there’s no specifically asexual entertainment.

I’m not saying asexuals don’t go out and meet people etc. We do it the same way everyone else does, except as intimated earlier, we don’t do it with any subtext. I stay in backpacker hostels and talk to other travellers; I go on walking tours with other tourists. Asexual doesn’t mean isolationist any more than ‘solo traveller’ means isolationist – and despite their common theme there’s no connection between the two; as an asexual I’ve no objection to travelling with someone (regardless of sexuality, gender, personal identity etc); as a solo traveller I’d rather be on my own but if necessary I’ll tag along with another traveller if it makes it easier.

It’s very hard to prove that something doesn’t exist. In philosophical terms it’s a case of ‘evidence of absence’; I can’t ‘prove’ I’m asexual any more than I can prove I’m an only child – “oh look, let me introduce you to my non-existent sister’. I look like a solo male traveller, I act like a solo male traveller … To all intents and purposes, I presume everyone assumes I’m straight since I’m ‘not obviously anything else’. Apart from my friend Amy, as stated earlier. I don’t know, do I come across as gay? The canteen staff in the office building I used to work in said my mannerisms were, in their words, ‘a little camp’, and reminded them of 70s/80s comedian Kenny Everett.

There’s also the small matter of my toenail varnish, which more traditional elements may find ‘effeminate’ and therefore give a certain impression of me, but my friend V suggests that’s only a minor aspect; certainly ‘on the road’ I’m much more mainstream & conventional than, say, a 1970s glam-rock or 1980s New-Romantic fan at their peak. That said, I rock the nail varnish more because toenails are generally pretty ugly things and so if I’m going to show them off, they might as well be blingy and pretty. One person did query this point abroad – when I was in Benin, my guide at Ouidah wondered if my painted toenails meant I was gay. I was maybe expecting more questions like this so I had an easy answer. 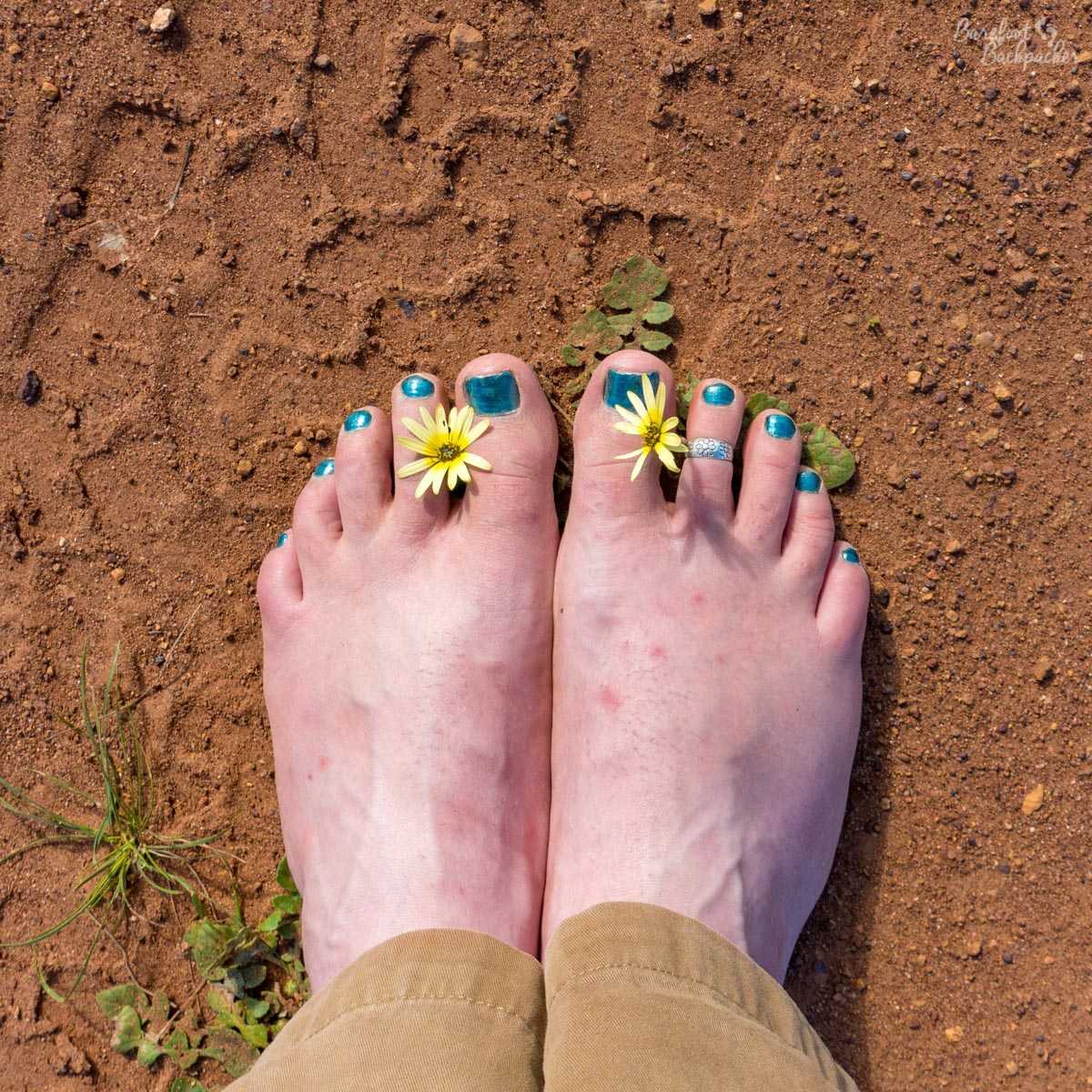 Toenail varnish, as painted by a friend in Australia.

The very first picture, chronologically, on my camera’s memory card is a picture of a female friend of mine. Being the first picture makes it easy to access, it’s usually visible just by pressing one button. This means I can easily and quickly show people a picture of her and claim that she’s my girlfriend or wife or whatever. The friend in question for my Benin trip was the aforementioned Amy, and she finds this endearing and quite amusing.

It’s similar in a way to tales I hear of (female) solo travellers in places like North Africa and India who are constantly asked about a husband – and to be honest when I was in Central Asia I had similar questions: “Are you married? Is your wife not with you?”. These female solo travellers will often whip out a photo of a male friend and say ‘he’s at home, busy, looking after the children and working’ or some combination of those excuses, and in a way it’s weird to think that I would do the same thing.

I personally don’t consider the questions I get asked to be rarely outwardly malicious (and that may be my male privilege speaking), but certainly asexuality sounds weird in a culture where anything other than heterosexuality, and proven heterosexuality at a younger age than me, is ‘the norm’.

On a more general view, there’s a whole question to be asked about ‘is it right to visit countries with a restrictive view of LGBTQI+ lifestyles’, especially as an asexual as I fall within the acronym. Should I avoid certain countries (Uganda, Russia, etc) because although they’re not repressive to me, they are incredibly so to people in the broader ‘queer’ community, and I should be expressing a kind of solidarity?

Conversely, there’s the argument that boycotts never change anything, and that by not going you’re actively hurting the locals in such countries, the majority of whom may well not support the actions of the governments anyway. [One caveat here, as a Brit, I’d say the majority of England, at least, are fairly repressive and insular, at least with regards to issues like immigration, and the impression I do get from places like Poland and Hungary is that the populist and conservative governments are broadly operating in line with public opinion, so ….].

This is largely an argument for a future podcast I think, but as an asexual, and I guess by posting articles like this I’d probably have to describe myself as ‘an LGBTQIA+ Activist’, it’s definitely something I’d need to seriously consider. While open legislation against asexuality is unlikely to pass, we still have more to fear than heterosexual travellers, because we are actively ‘different’, and we shouldn’t need to ‘hide’ ourselves, we shouldn’t need to ‘pass’, even if we do so without too much effort.

For a broader summary, take a listen to Episode 32 of my podcast.