As international borders go, the one between Serbia and Bosnia that I passed through around 2.30am wasn’t anything particularly special. An overhead rigging, with a cabin by the side of the road – the road at that point being a normal, standard, single carriageway with one lane in each direction. Quite possibly the smallest and least gregarious border I’ve passed through, in fact. Nothing more special than a place to get a couple of passport stamps and then move on. Except that I didn’t – we just passed straight through. The other weird thing about this border though was the signposts between the two customs posts: “Goodbye from the Republic of Serbia” was closely followed by “Welcome to the Serbian Republic”! Such is the dual nature of Bosnia and Herzegovina – if you thought Belgium was weird with its two identities, Bosnia will knock your socks off (assuming you’re wearing socks, that is – normally I’m not)! The two entities in Bosnia are (surprisingly not Bosnia and Hercegovina), ‘The Federation of Bosnia and Herzegovina’, and ‘The Serbian Republic’. They have different government structures, tourist agencies, bus companies … a few years back they even had different currencies, but now both use the Convertible Mark, a ‘temporary’ currency that’s fixed to the Euro – it’s name (and that it’s divided into 100 pfennigs) comes from the fact it was originally fixed at 1:1 to the German Mark. 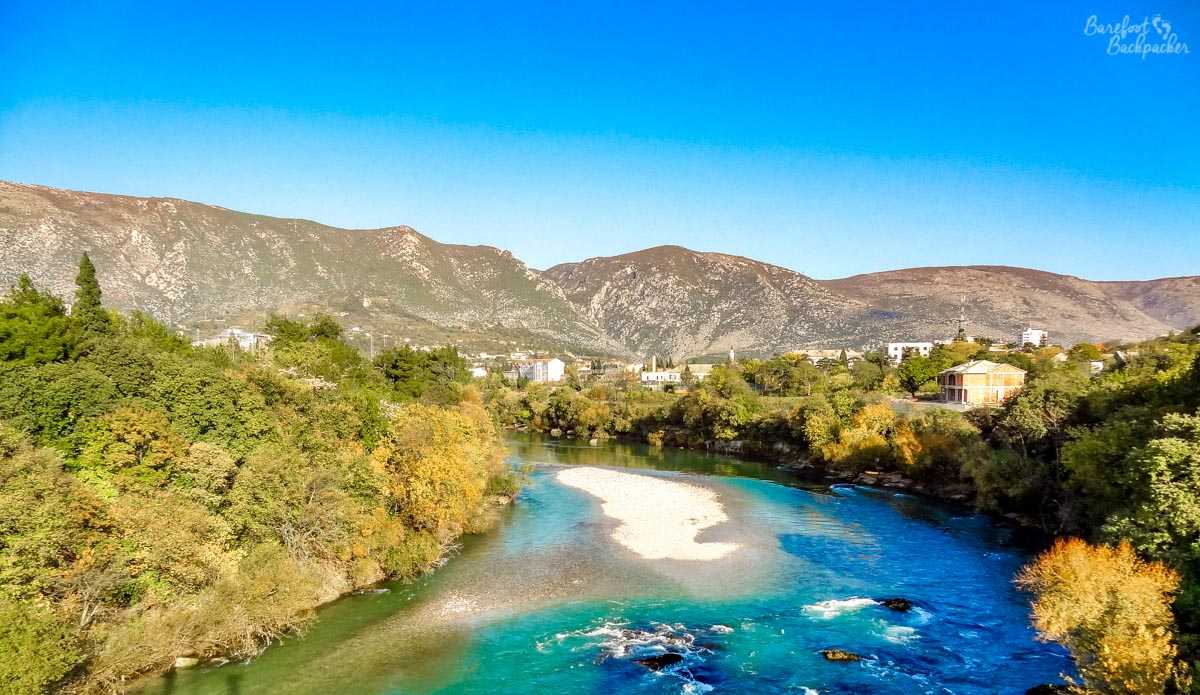 The surrounds of Mostar are patterned with hills, rivers, and wild country.

My first point of call in Bosnia, in the morning sunshine, was the town of Mostar. It’s famous for two things; the old bridge, and for being near Međugorje, a Catholic pilgrimage site. No, I’d never heard of it either, but then I’m not a Catholic. However the lady in the shop I bought some postcards from near the Old Bridge said that, while most British tourists (like me) come either individually (like, er, me!) or in couples, the majority of tourists come in tour groups from places like Italy or Brazil, primarily to visit the pilgrimage site, and then pop by Mostar because it’s the nearest town of significance. 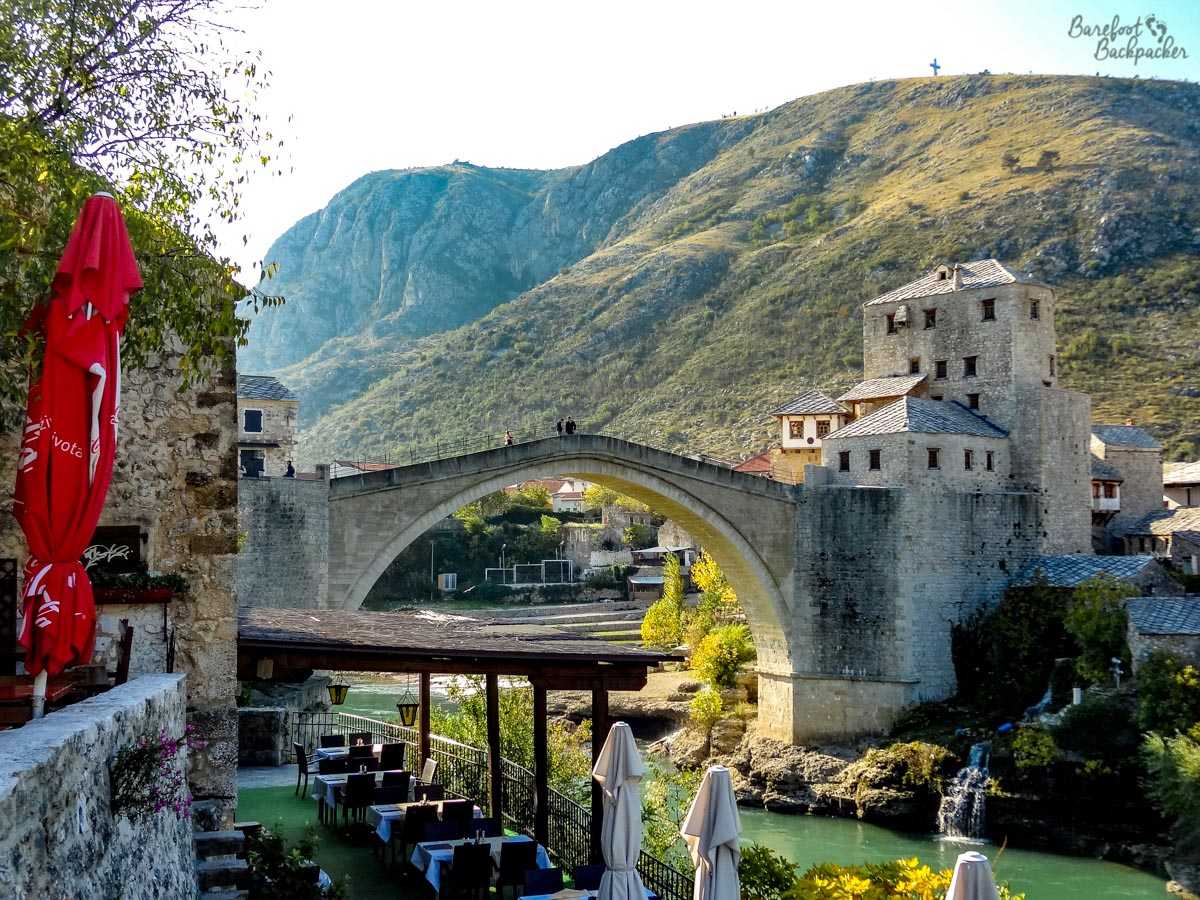 Stari Most, the Old Bridge, as seen from a promenade of cafés.

What can I say about the bridge? Stari Most – the “old bridge” – gives its name to the town, but the current bridge is very new. During the Balkan Wars of the mid 1990s, the ‘old’ bridge was destroyed; the current incarnation was rebuilt after the war, admittedly as an exact copy, but still it’s not like you’re looking at something that’s hundreds of years old. Maybe it’s the principle of the thing, but I always feel a little short-changed at seeing modern copies of things perceived to be ‘old’ – it’s a debate I have often with myself at many archaeological sites, but it’s rare that something has been completely rebuilt ‘as old’; mostly they’re just ‘renovated’. 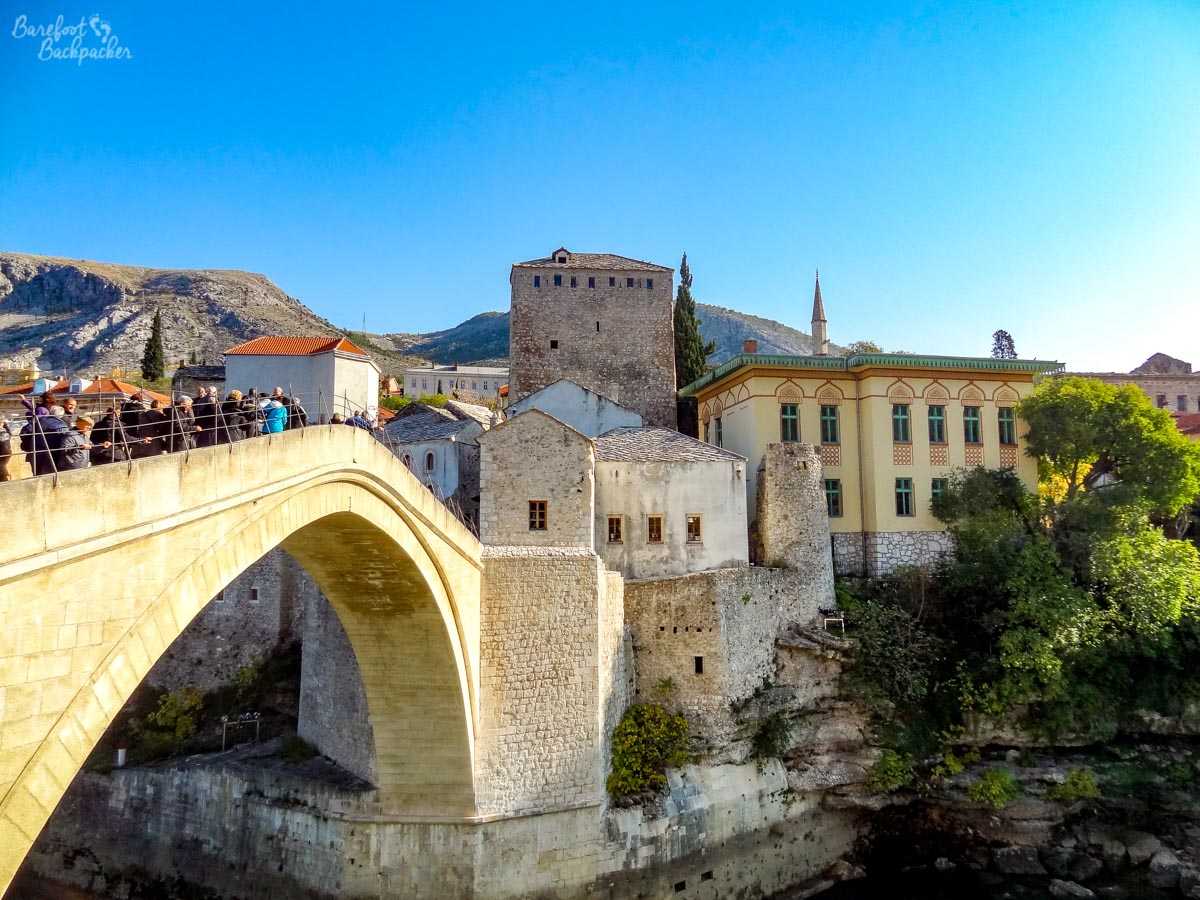 Stari Most, the Old Bridge, as seen close-up. Complete with tour group.

The bridge is about the only thing in the city that has a tourist ‘bent’ – souvenir shops line the cobbled street on the approach to the bridge but apart from that the rest of the town is severely lacking in sights, unless graveyards and burned-out buildings are your thing, That said, for a relatively small town there’s an awful lot here if you look hard enough – most of it is visual rather than educational but even so … there are mosques, churches, ornate buildings, bridges, even the graveyards have style. And it’s close enough to the mountains to be able to go hiking and look down. 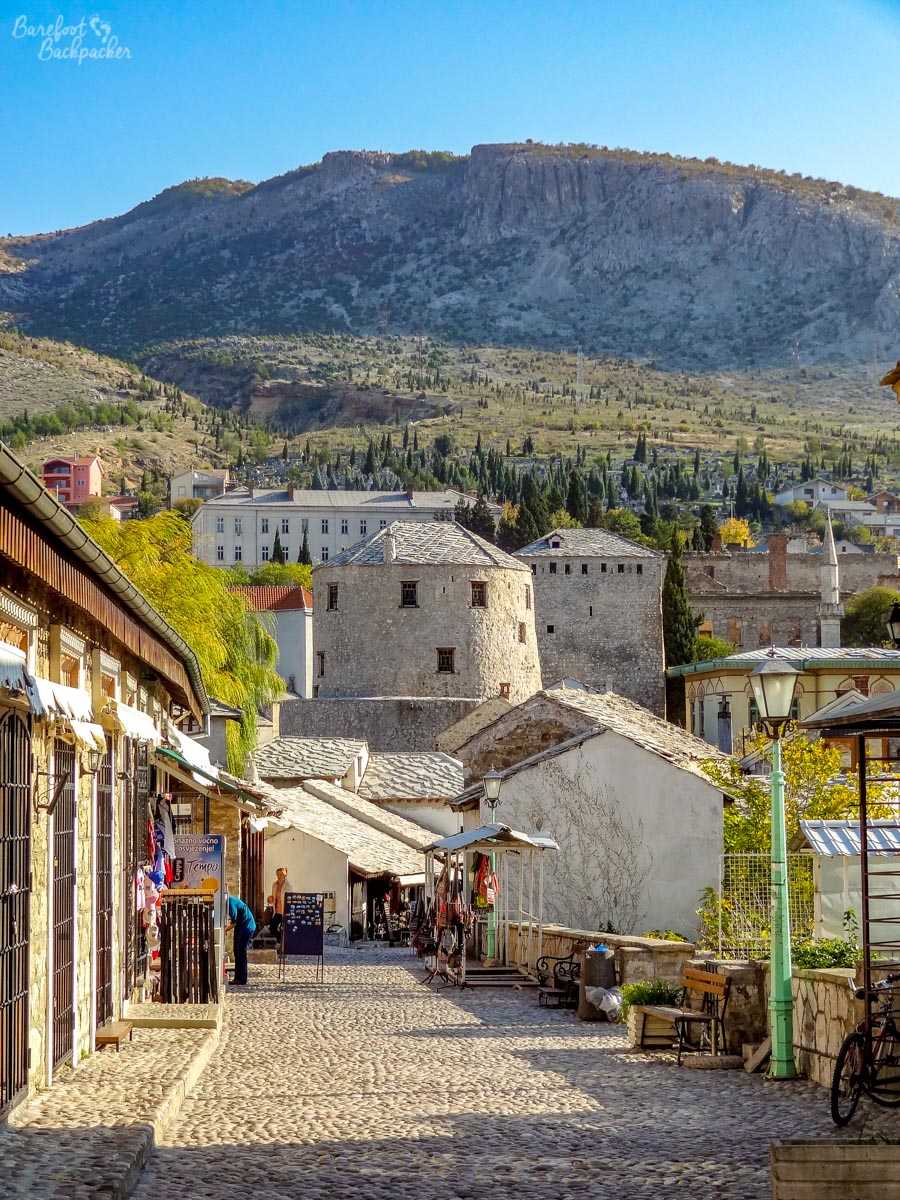 One of the streets in Mostar old town.

It’s a shame it only focusses on the bridge (and the war), as the setting is beautiful. Mostar itself lies in a plain surrounded by mountains. You can see the peaks rise in the distance between the buildings, or in the distance at the end of the roads. With the sun shining as it was on my arrival, it just felt like it was some remote Himalayan town – it actually was quite gorgeous. Coming into the city you really get a feel for its location too – it feels not unlike it’s built in a crater with the mountains rising all around it. 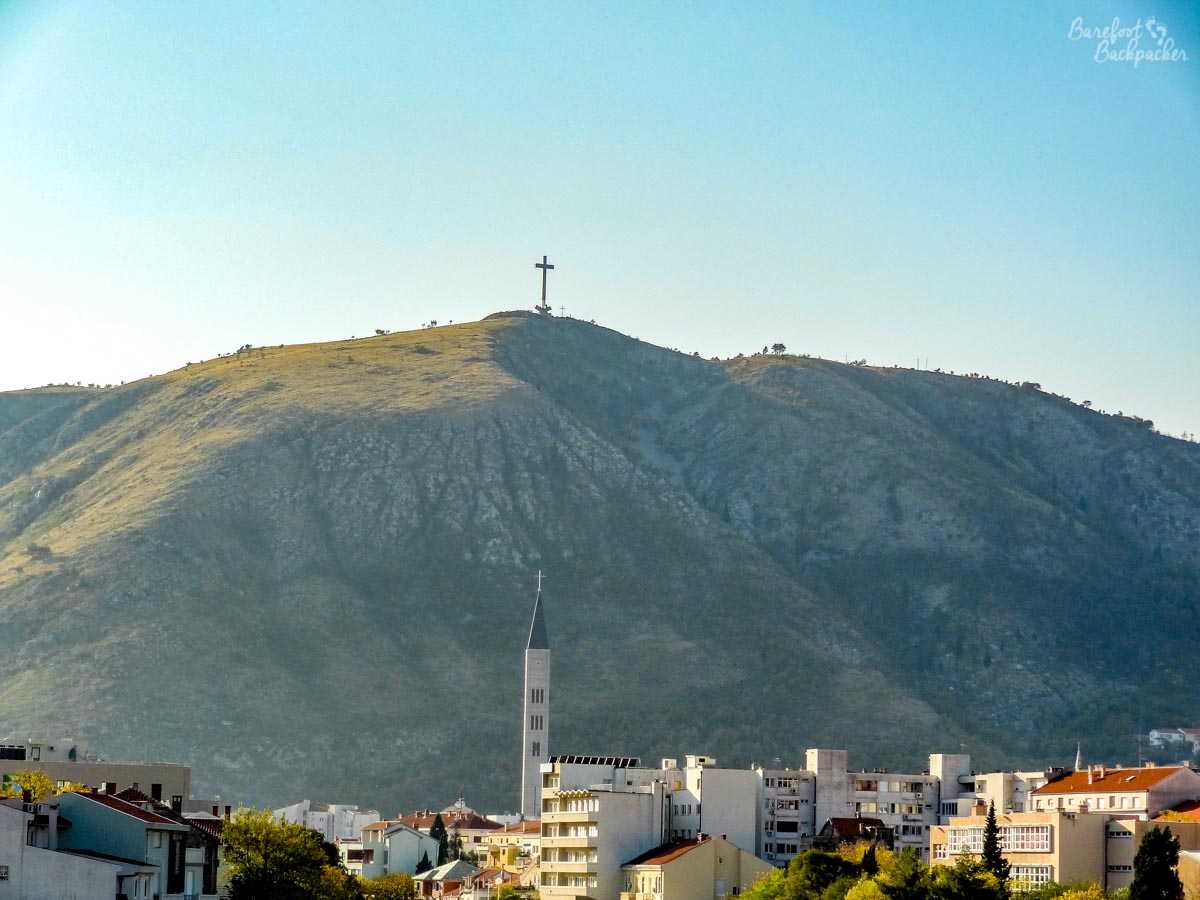 The mountains near Mostar. The cross is on nearby Hum Mountain, and is an awkward climb near a minefield. Seriously. I … didn’t. 😀

It’s not just in the town itself that you can appreciate the scenery. Although much of my journey in from Belgrade had been overnight, you could tell what the landscape was like just by the images of the rocks and the fact we kept climbing. And when I woke up for a bit around 6.30am, I was greeted by practically polished white rock formations on the right and, far below us on a plain, pure white houses. In the distance lay another ridge of mountains. Then, in the last hour of the journey, we wound up a very bendy, winding, road going up and down a sharp hill. It actually felt like something out of The Italian Job. Without the gold bars, obviously. Although you never know what kind of thing gets smuggled between Serbia and Bosnia. Not that I’m smuggling anything – 70 Serbian Dinar won’t get me very far …

It’s the same coming out of Mostar going North to Sarajevo. Wikitravel suggests doing this journey by train to maximise the scenery; I did the journey by bus, and I have to say it must be a close second. I can honestly say it’s probably the most scenic road I’ve ever been down. A combination of high mountains, deep blue lakes, rivers, trees, and a sense of loneliness all coupled to make this a somewhat impressive journey. It’s also probably the only time I’ve been stuck behind a slow-moving lorry and haven’t wanted us to overtake it.

Sarajevo itself … is not blessed with charm and good looks. Or at least, not on the surface with initial impressions. However, it’s a large city and therefore prone to variations on a theme of architecture. The SW approaches, from whence I arrived, are grey, grim, overgrown, and generally not much cop. However, once you start to get beyond the train and bus stations, it becomes much more like a city centre rather than the concrete suburbs. And then you hit Baščaršija – the ‘Old Town’. It actually means ‘Main Market’ in Turkish, and it’s a combination of pedestrianised shopping street and, well, souk. It’s actually more full of places to eat rather than anything else, although there are a couple of very ornate mosques in the vicinity. 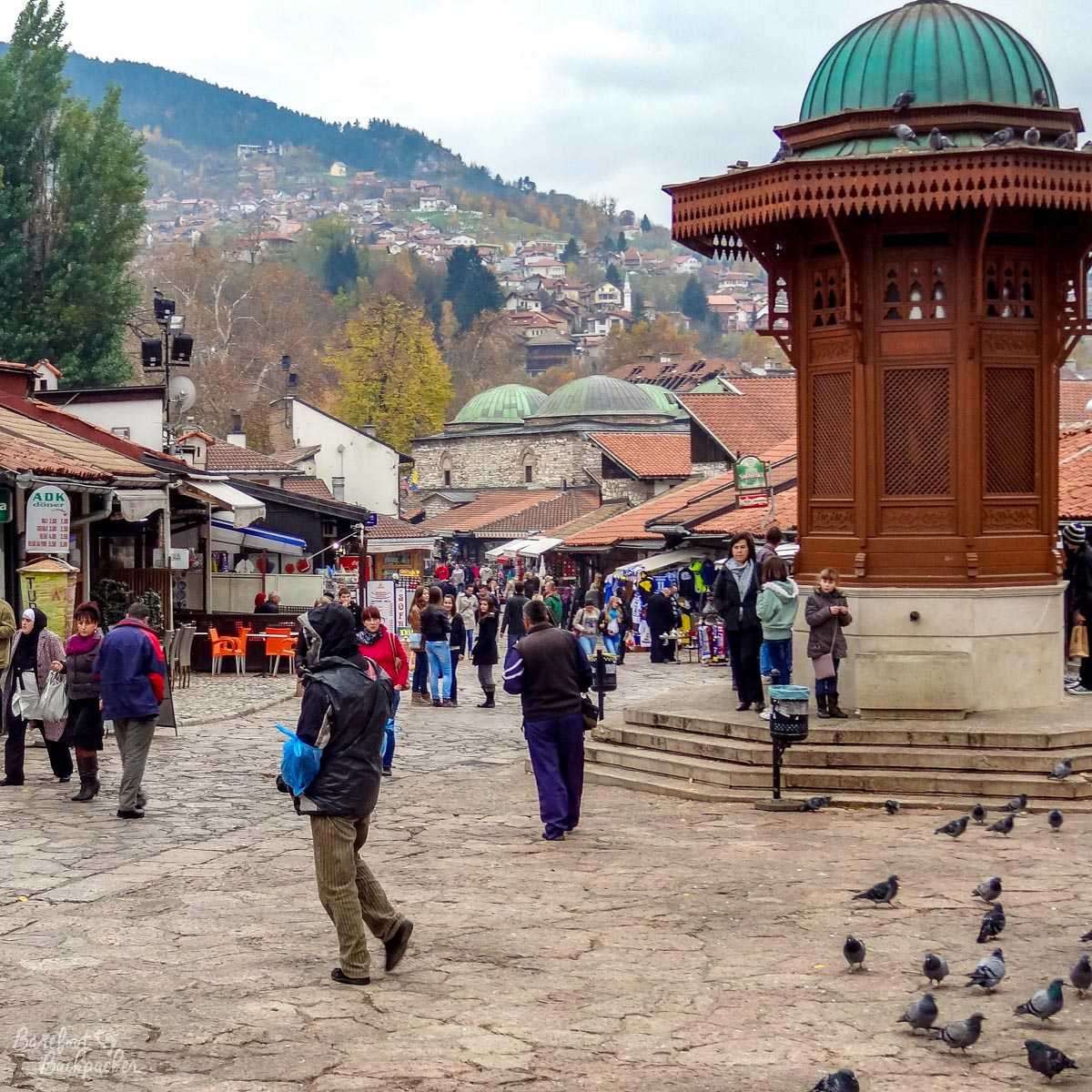 The origins of the town are Turkish – the city as it stands now was founded by the Ottoman Empire in the 1400s – and there is still very much a Turkish bent to Sarajevo. This is why, for instance, much of my food here, whilst traditionally Bosnian, sounded very definitely Turkish – ćevapčići (essentially a Slavic kebab, with small sausage-shaped pieces of meat, especially popular in Bosnia and Southern Serbia), and (h)urmašice (a very sweet pastry dessert). On my first evening in Sarajevo I also had what we in the UK might call a “Doner Kebab” – the concept is a traditional Eastern Mediterranean foodstuff with grilled meat (probably lamb) on bread with salad. It must be said it’s so much healthier here than back in the UK 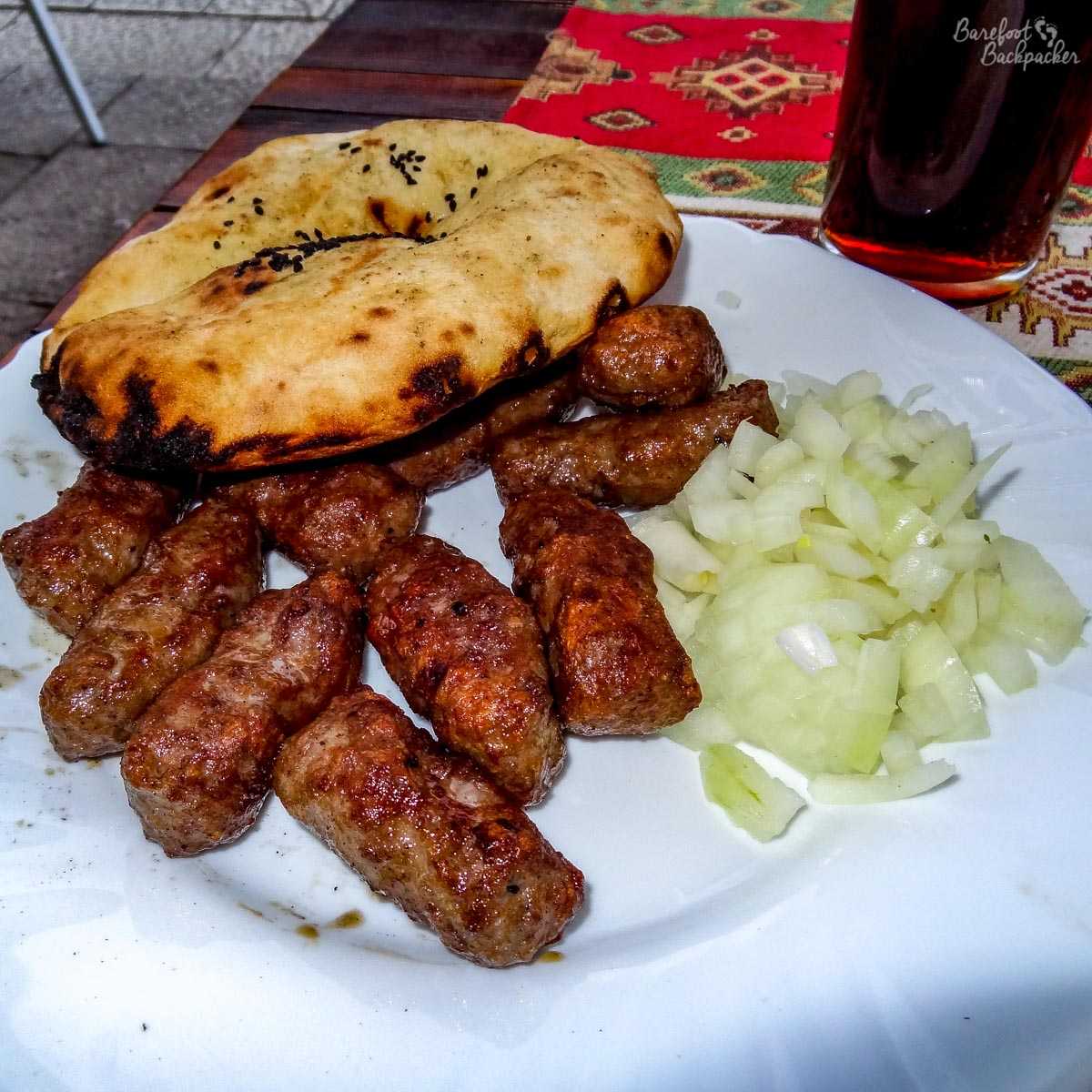 An example of ćevapčići. Much better than what I find in the UK!

One of the historic sites in Sarajevo from this period are the stone ruins of a caravanserai (the Silk Road equivalent of a coaching inn), called Tašlihan (the name seems to mean ‘inn made of stone). It was built in 1543, but was left in ruins by the time of the last fire in 1879. At its height it had a capacity of 90 people in the inn itself, and could accommodate 30 people and 70 horses overnight. According to the blurb on the information board on site, although it was built of stone, it was covered with lead domes – quite unusual and suggests it was quite an important stopover point. There was also heating in each of the rooms – each room having its own chimney – while in the central courtyard was a water fountain. Apparently accommodation was also free. One imagines the owners made enough money from food and drink. 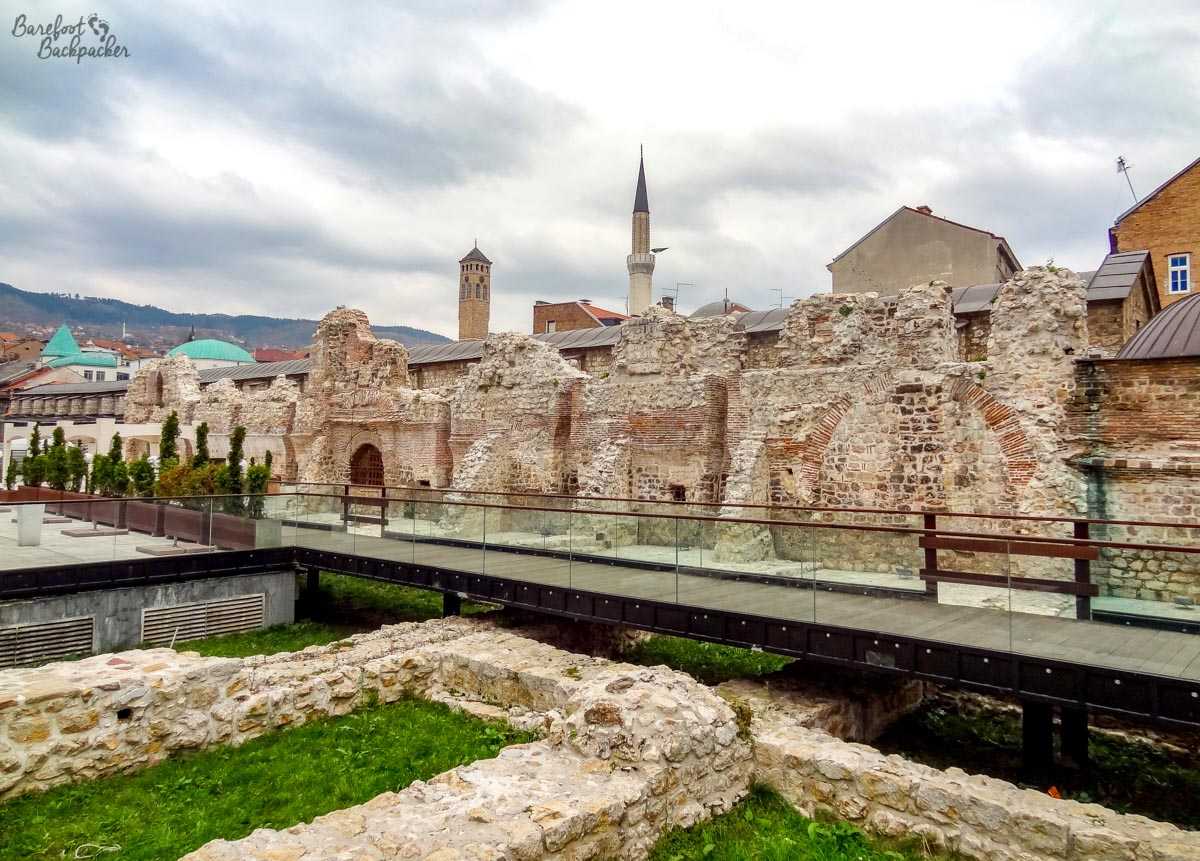 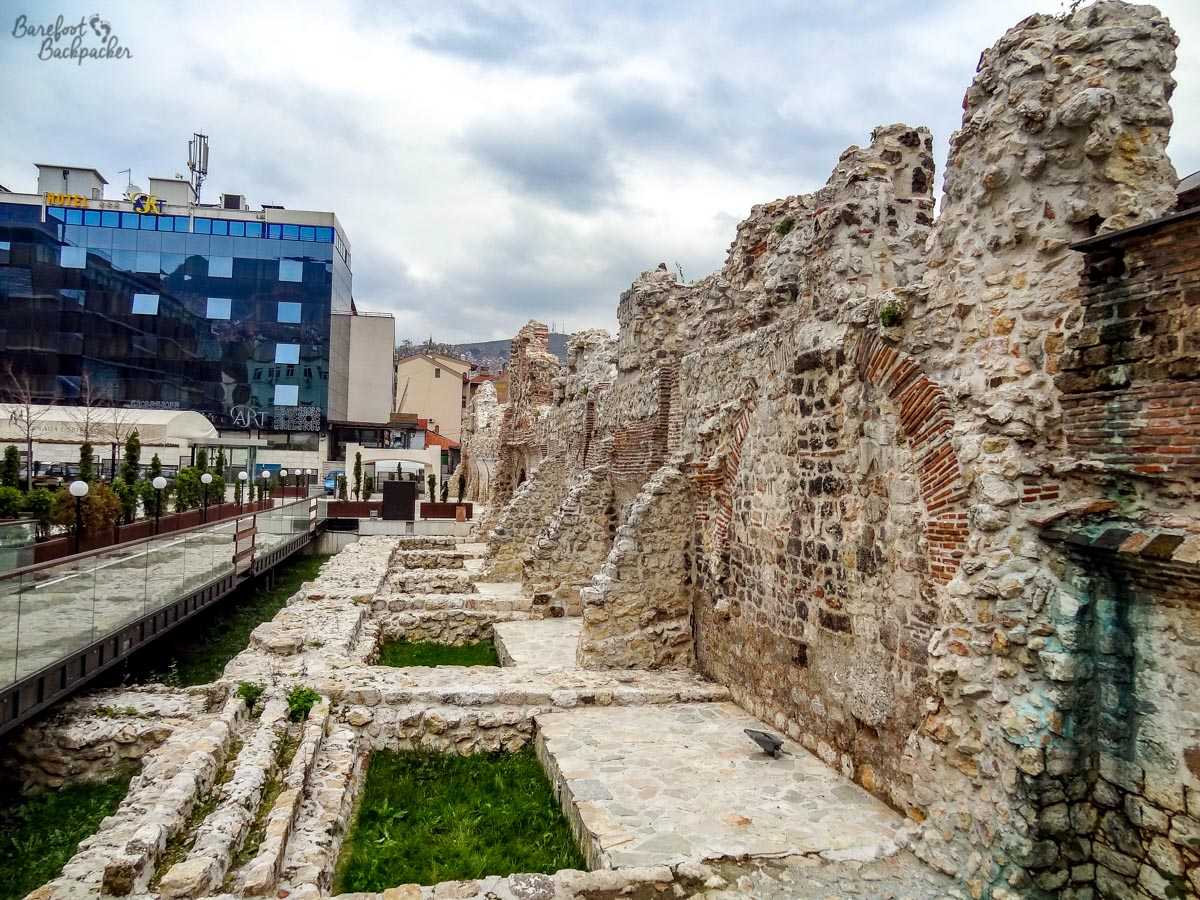 Much of my brief time in Sarajevo was spent exploring the dark history of the city, but I did have time to venture on a long walk through the old town and out the other side. The route took me along a pathway next to the river lined with trees with a dedication from many of the world’s countries, before passing some churches and mosques, before going up and over a very steep hill from where you’d get great views over Sarajevo city it wasn’t so misty. Eventually the path passes some spectacular cliff edges before ending up at what’s known as the ‘Goat Bridge’, an original Ottoman-era bridge (possibly 16th Century, certainly regarded as ‘old’ by 1771) that’s on the original trading routes that passed through Sarajevo between the West and the Ottoman Empire. It might get its name from goat herders or goat traders, no-one really knows. Anyway it’s about 2.5km out of town but it’s very very rural – virtually nobody heads out this way. Shame, as it’s quite pretty. 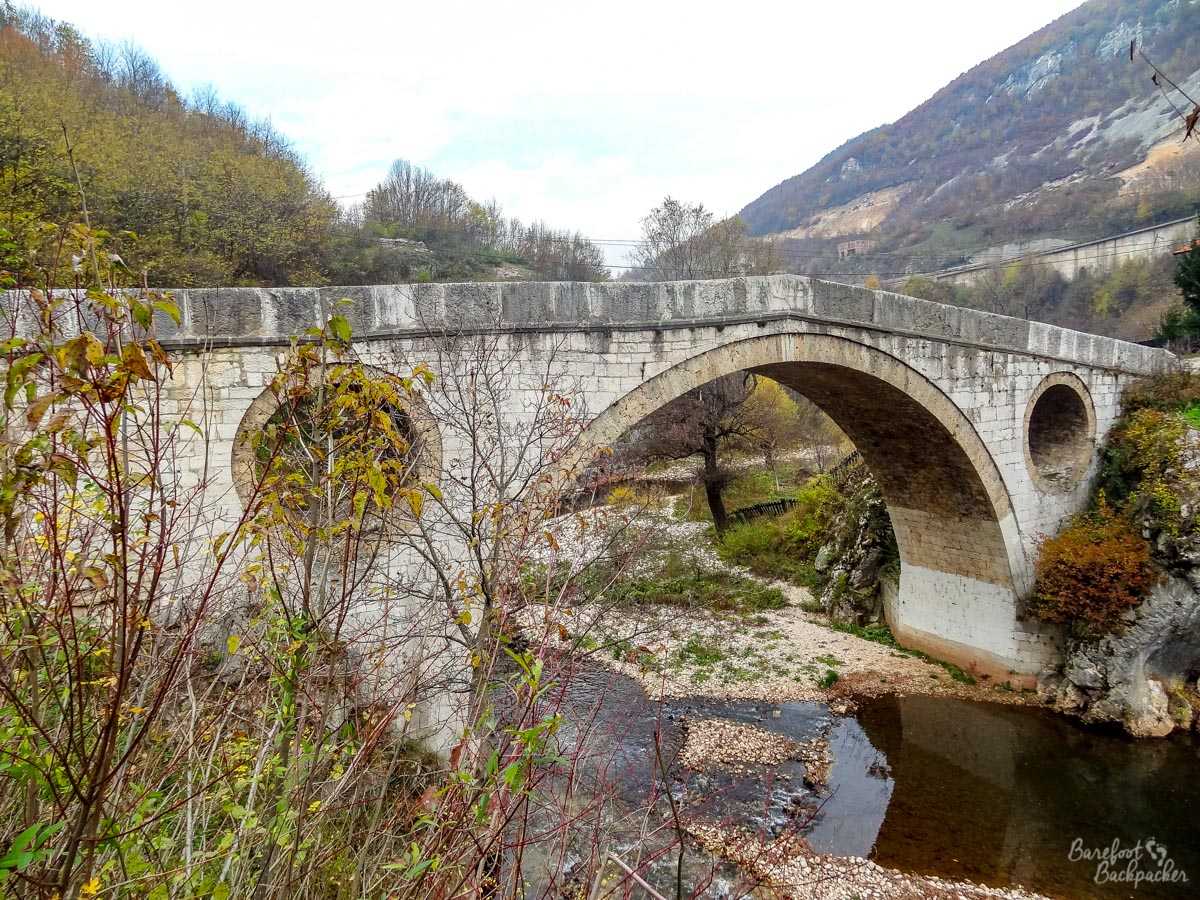 The “Goat bridge”. No goats in evidence, tho there was an Alsatian nearby.

I do need to revisit the city – there’s a whole host of non-military legacy to explore, including sport.

For more about the Bosnian War, click here”.
Other places nearby include Belgrade, Serbia.