See, I’ve been to Belgrade now three times (I have a penpal there), and each time it’s been in a different country. Such is the way of the world. It’s one of those cities I’ve never really “explored” like a tourist either, because I have a very good friend there so effectively I just lurk like a local; in a place with a different alphabet, this is quite a useful thing. Granted she lives in the suburb of Novi Beograd, dominated by communist-era tower blocks which, while they perk a slight nostalgia in me, don’t really feature on the list of usual tourist sights. 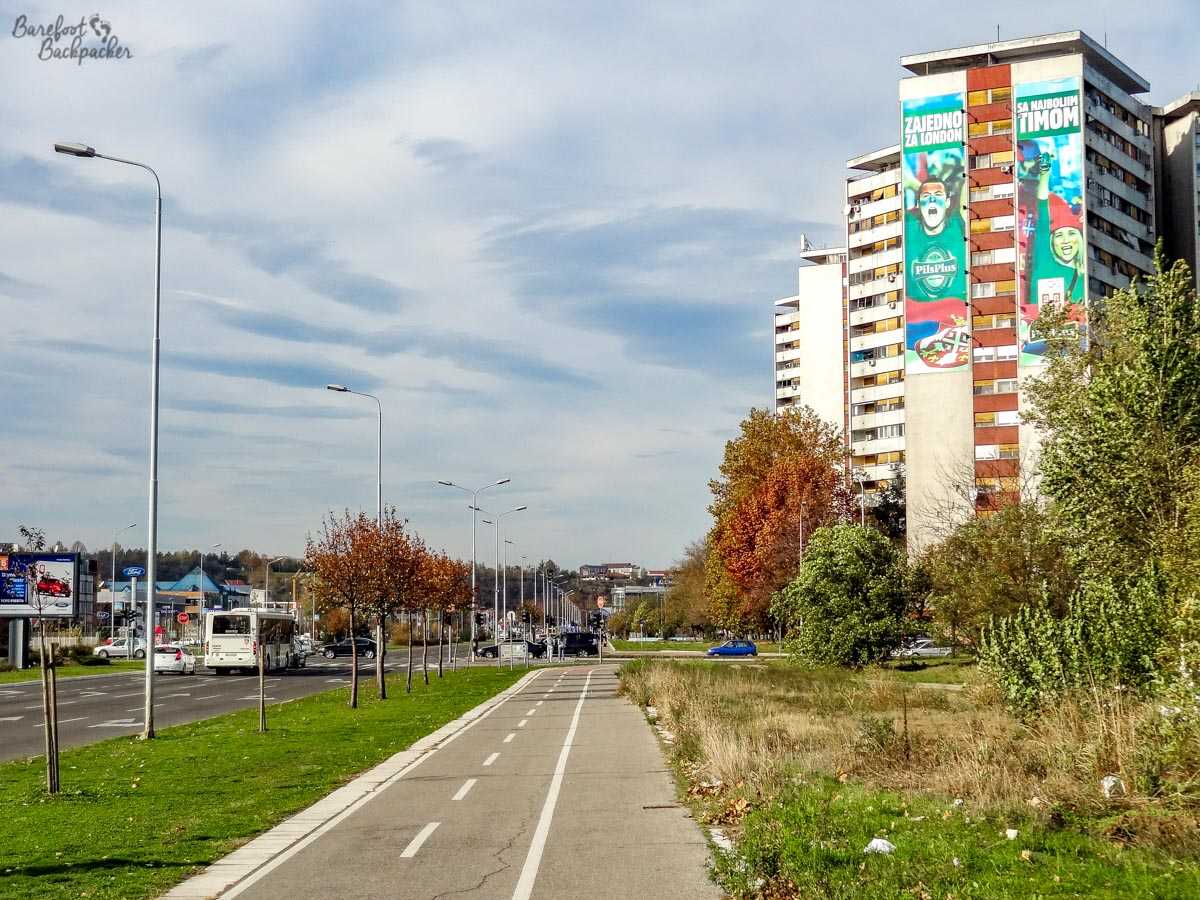 While I think of it, I need to clarify the name of the city. In the Slavic languages, the name of the city is ‘Beograd’, regardless of whether you use the Cyrillic or Latin alphabets, and the name means ‘White City’ – apparently there was a fort near where the Sava meets the Danube that was built out of white stone, and the settlement that grew up around it was named after the fort. I’m not sure why the English-speaking world uses the name ‘Belgrade’; ‘Beograd’ is easy enough to say, and there are many other towns across the Slavic world that have ‘grad’ in their names that are in common use in the West – St Petersburg was never called ‘Leninsgrade’, after all … !! 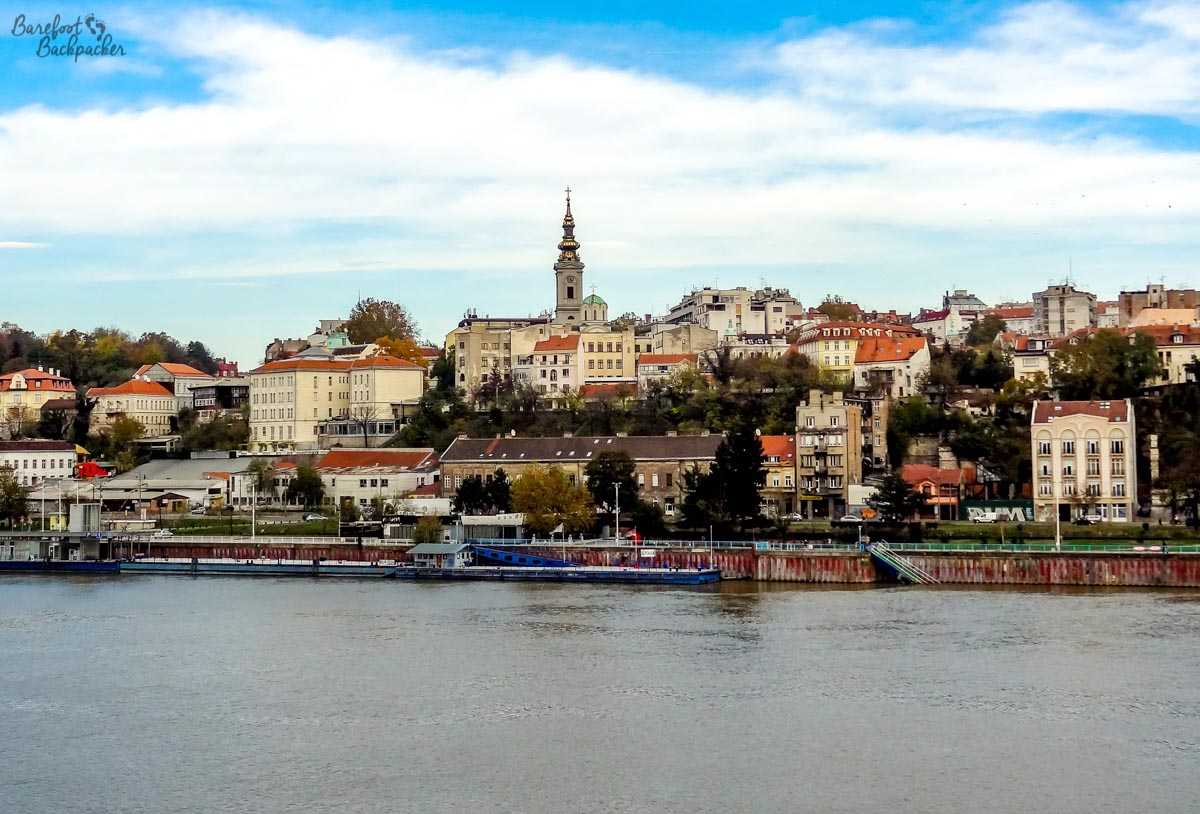 The riverfront of Belgrade, as seen from the main bridge to Novi Beograd. The river is the Sava.

The city has an unusual layout. The ‘old town’ is to the East of the Sava River, Novi Beograd to the West, and virtually nothing at all is North of the Danube. This makes the city centre also very much on the edge of both the city and the whole conurbation. This is presumably a historical legacy – Beograd has for millennia stood on the borders of several cultures and empires. The Danube was often the frontier of the Roman Empire. The Sava was often the boundary between Austria-Hungary and the Ottoman Empire. Given Beograd’s location at the centre of all this, it’s not really that surprising that the area has been in the midsts of a lot of conflict …
[As a side note, the River Sava itself is often seen as the Northern border of what is known as the ‘Balkan Peninsula’. The river rises on the Slovenian-Italian border, and flows past Zagreb in Croatia before flowing into the Danube here. As European rivers go, it’s a pretty significant one!]

In the North of the city centre is Kalemegdan Park. It’s one of the oldest still-surviving bits of Beograd and acts as the ‘main meeting point’ for the city. It’s used as a place for the locals to relax and get some fresh air; being over 120m high, there are good views over the Danube/Sava, and to the plains beyond. The park itself is built to enclose a fortress that was originally constructed in the pre-Roman period and for many centuries ‘defined’ Beograd until more recent urban spread. 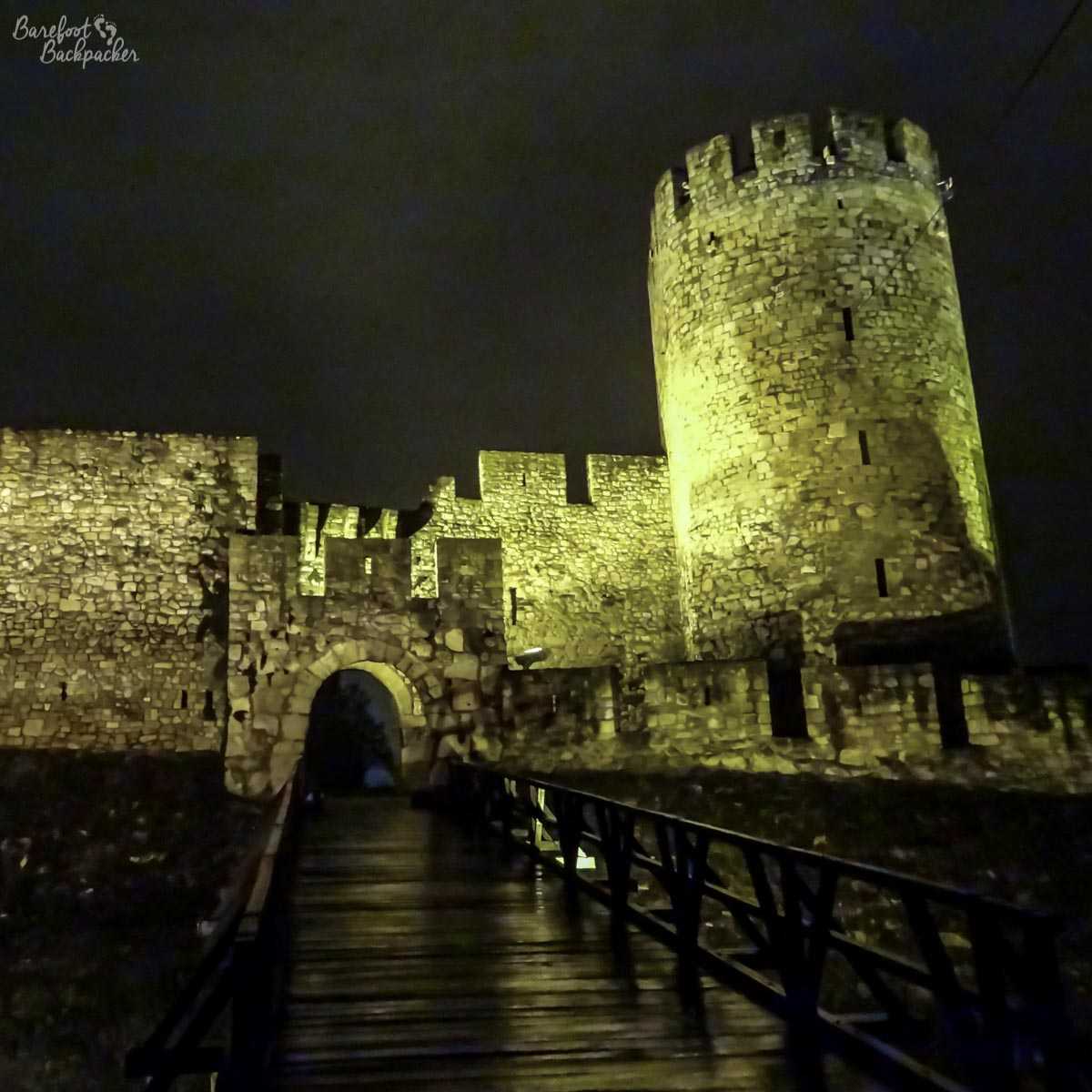 The entryway to Kalemegdan Fortress. Forgive the quality of the shot – it was night and raining & I wasn’t as knowledgeable about cameras as I am now!

Obviously I visited at 5pm on a dark November evening, with persistent misty rain, and we virtually had the place to ourselves as we wandered through it. In such conditions, the lighting that illuminates the different parts of the fortress took on a more eerie look, especially as they lit up the rainfall and showed it falling in weird swirling motions due to the effect of the slight breeze. The eeriness was heightened by the distinct lack of other people – in the whole time we were there I think we saw maybe four or five other people, which is apparently very unusual. One could imagine that in some of the dark corners there were people maybe doing things that would be frowned upon …

Another building that dominates the city, especially at night, is the Church of St Sava. It’s one of the largest Orthodox churches in the world by volume, although this is largely because they’re still building it and there’s not a lot inside to get in the way…St Sava is the patron saint of the city and there was a desire to have a church dedicated to him since the 16th century, but it wasn’t until the fall of communism that this location became anything more than a building site. 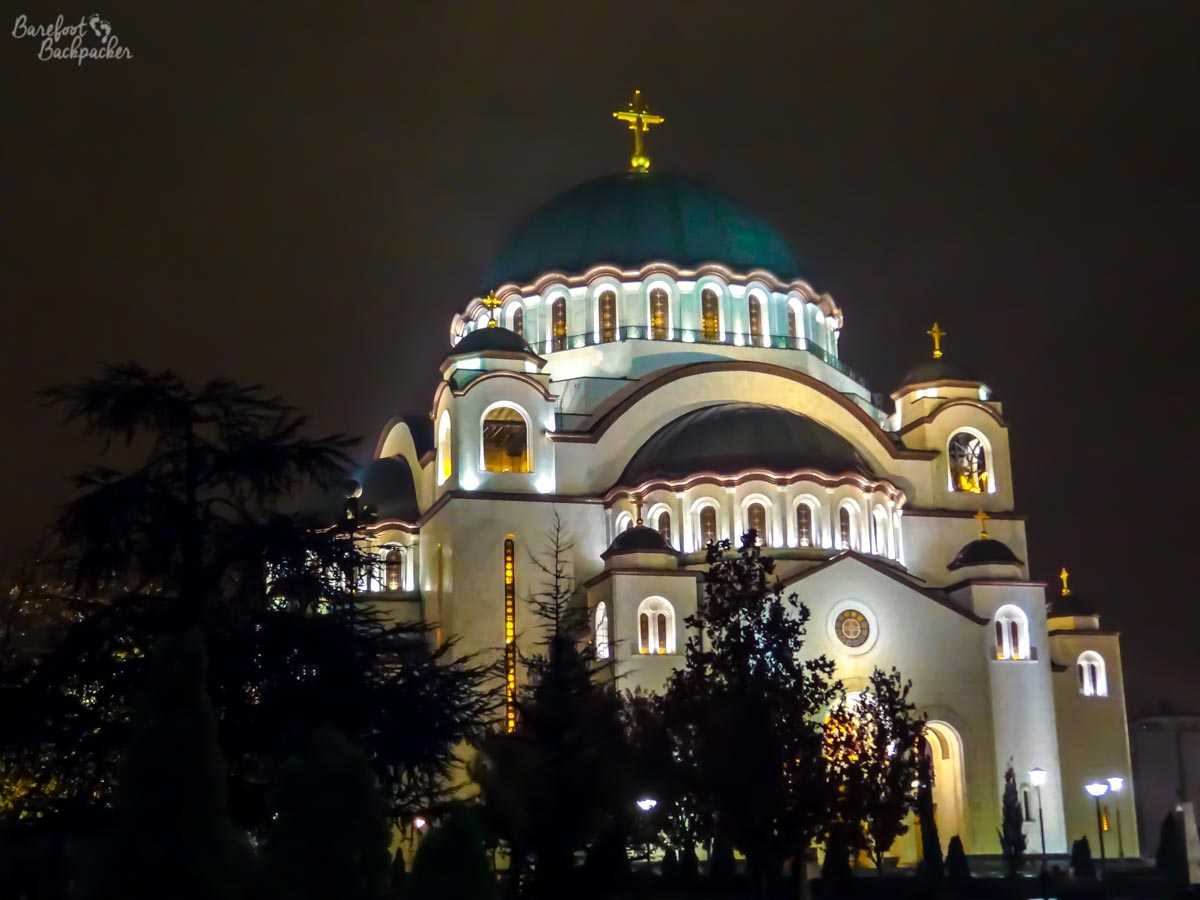 Elsewhere in Belgrade one can find a copious amount of street art, as well as museums dedicated to Yugoslavian history, including one purely about Marshal Tito, the communist revolutionary and President of Yugoslavia for 27 years (indeed some say it was only his strength of character that kept the country together for so long). Interestingly, it was closed the day I passed by to visit. 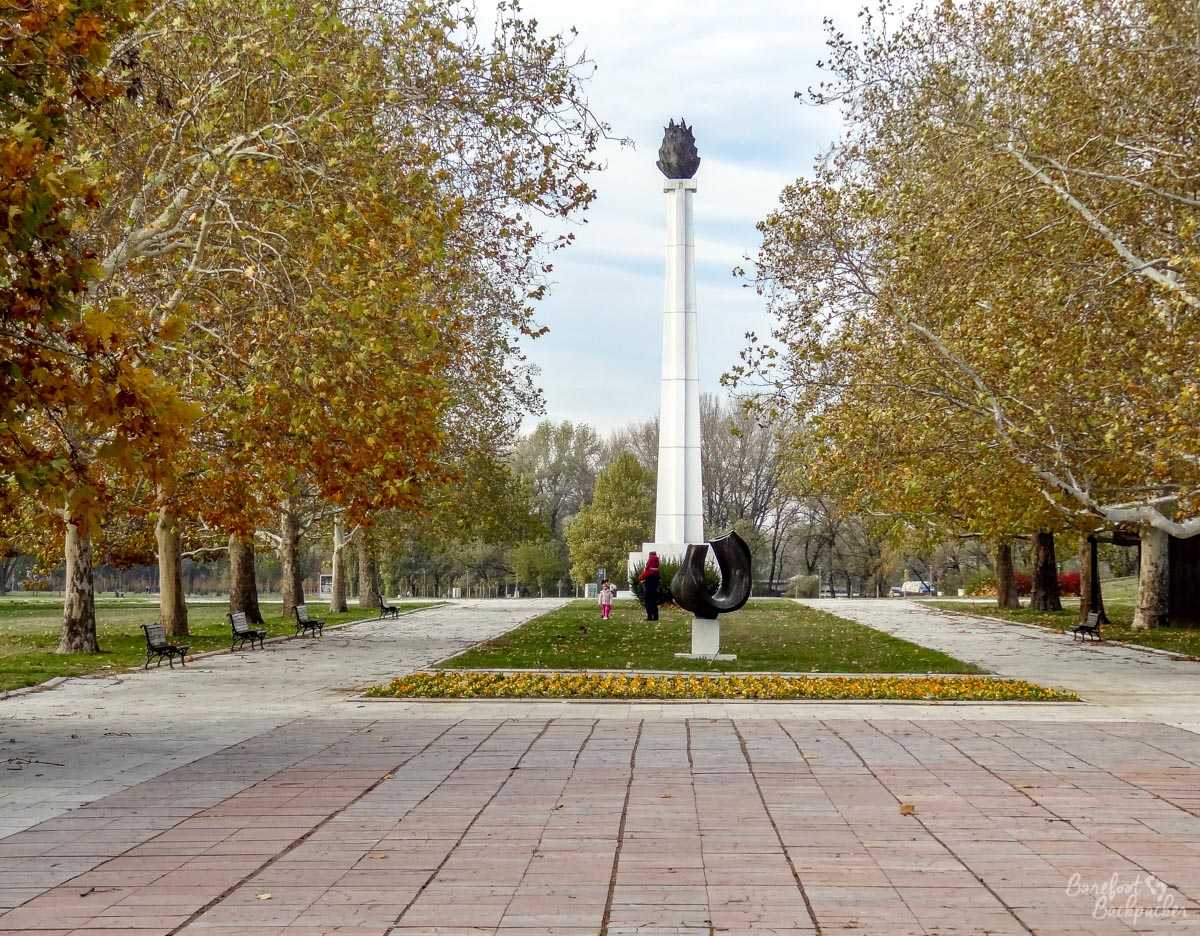 On the Northern edge of Novi Beograd is a large parkland (Park Prijateljstva), which runs along the confluence of the Danube and Sava rivers. It’s a typical city parkland, with children’s play areas, footpaths/cyclepaths full of joggers, free water dispensers that don’t work, but also hostels and small art places on the riverbank itself. At the end of the park, near the Sava River, is a tree plantation created over time by visiting politicians and dignitaries from around the world, who have planted a tree ‘in friendship’. Next to each tree is a small stone marker, engraved with the name of the planter, the country they represent, and the year. I did manage to find the one planted by Margaret Thatcher in 1980 … many of the trees were planted by other leaders from the ‘non-aligned nations’ (those countries who, in the Cold War, sided with neither the USSR nor the USA. Yugoslavia was one of the leaders of this movement, along with India. This is also the origin of the phrase ‘Third World’). Some of them seem to have disappeared (eg Mali, there was a plaque but no tree!).

West of Novi Beograd stands the suburb of Zemun. It feels very much like a ‘riverside resort town’; it lies on the South bank of the Danube river and is a popular place for fishing boats to set sail from. It’s also quiet and peaceful, with hilly cobbled streets and churches that have been being renovated for several years, while there are good views to be had over both the Danube and out over the whole of Beograd itself. 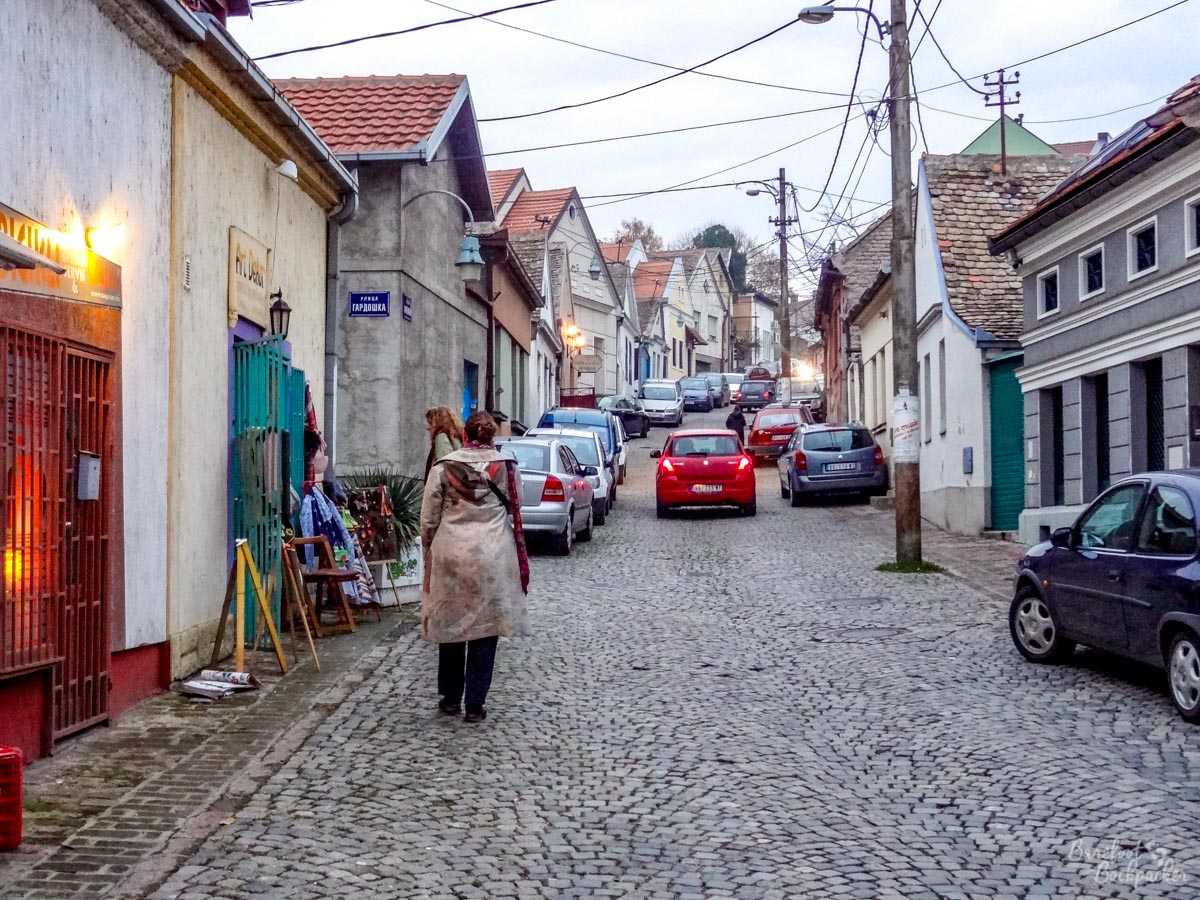 One of the backstreets of the suburb of Zemun.

My time in Zemun was mainly spent eating, drinking, and not dancing. A friend of my friend in Belgrade (Maša) took us to an old-fashioned restaurant/bar-type place where they played live jazz music on a Tuesday night. Inside, it looked like a typical restaurant; long (relatively thin) seating area, with tables along the walls. Waiters serving tables. Food and drink menus. Standard stuff. Except that near the far end (very close to where Maša had reserved us a table), within the aisle of the restaurant (so not raised or anything), were a jazz band, with saxophonist, drummer, vocalist, etc. And every so often they’d launch into a number, whereupon a couple of diners would stand up and have a dance to it. The clientèle were generally older (at least in their 50s, some older), although there were a few people our age there. Quite a few of them were dressed up reasonably well. Evidently this was their ‘social occasion’, and it certainly showed that people were enjoying it. It was good music, good atmosphere, even if a tad surreal to be in a jazz club in Beograd. 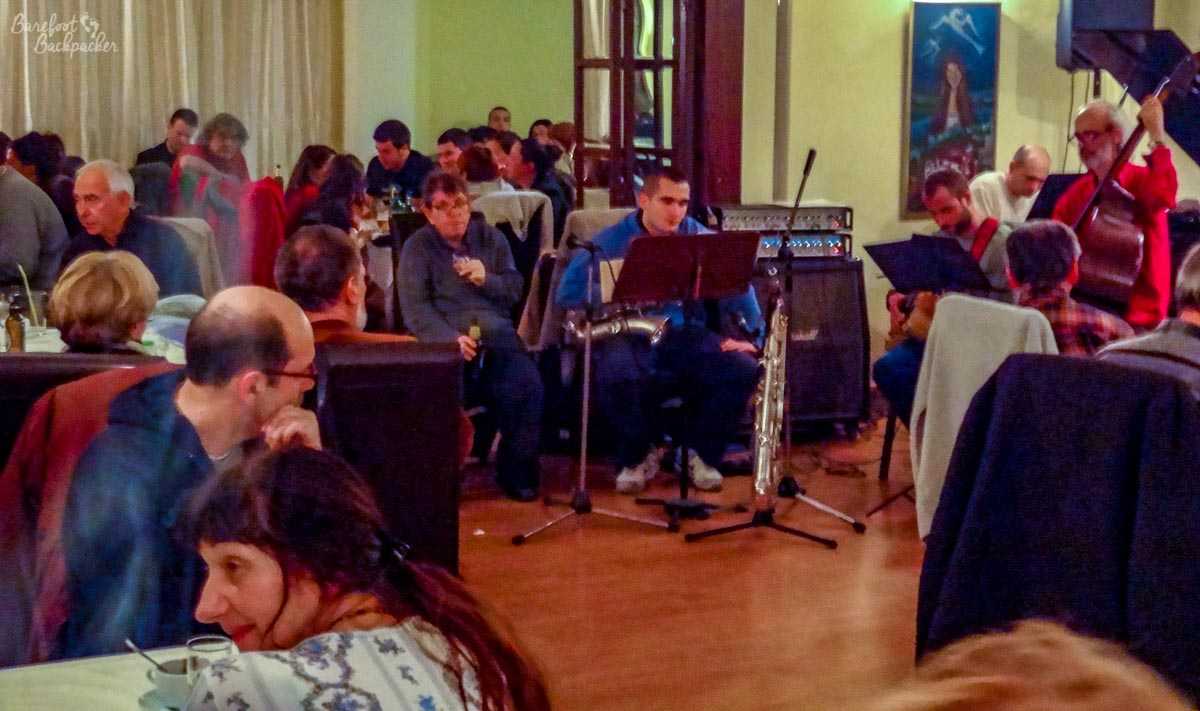 Music playing in a jazz type club in Zemun.

Other than that, Zemun is mainly a fishing village, due to its location – the area is littered with fishing-type boats (even the houses halfway up the cobbled hills have the occasional boat in their front yards, although some of them they really are occasional boats; at other times they serve as a means to create rotting wood). At the end of one of the paths along the riverfront is a ‘fisherman’s club’, which has a public restaurant inside. The three of us had a large bowl of fish soup to share between us. I couldn’t honestly tell you what sort of fish was in it – all I can say is that quite a lot *of* the fish was in it – but cooked very well and chopped very small so that even the bones and stuff was crunchy and edible. It was served with chilli flakes, and, of course, some Serbian plum brandy (šljivovica) to wash it down with – quite smooth but also a little smoky. 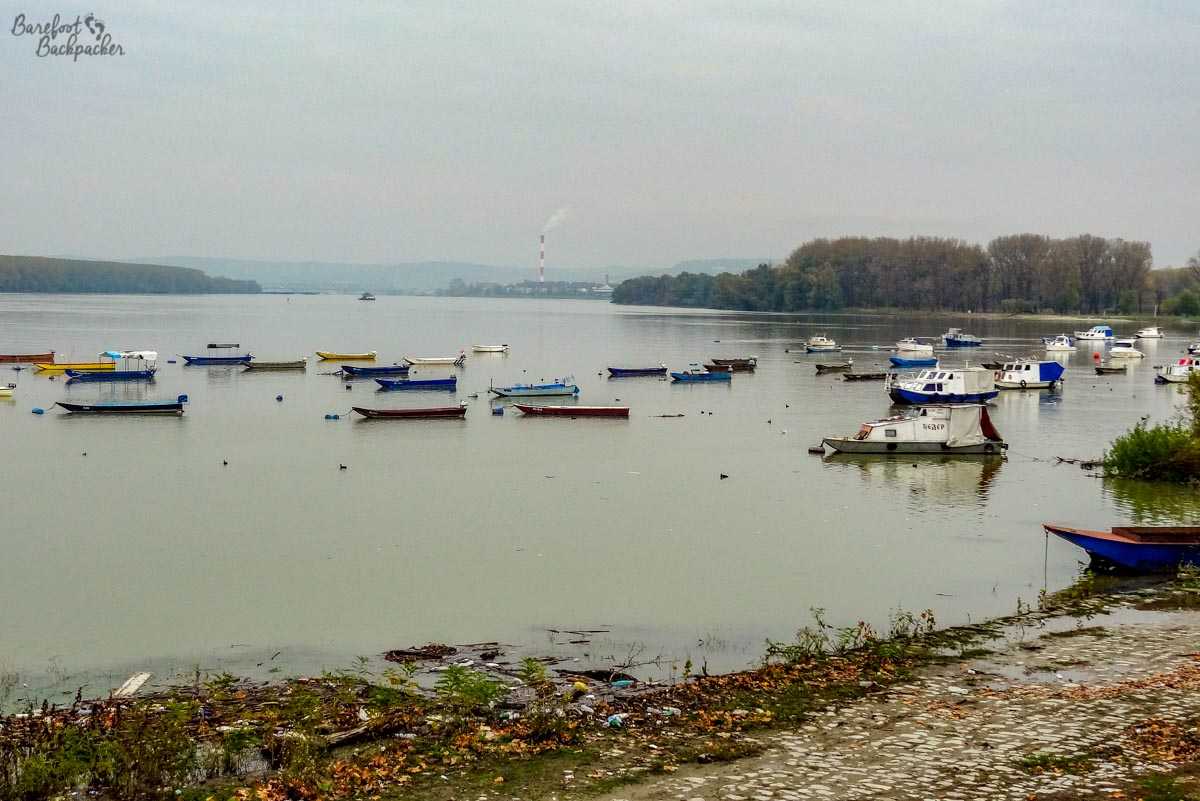 Boats on the Danube at Zemun.

I guess what my time in Belgrade shows is that there’s a hidden side to the region, just waiting to be discovered.

Other nearby places include Novi Sad, also in Serbia, and Mostar & Sarajevo, in Bosnia.