So, let me take you back to the heady days of the mid 1990s. What were you up to? Most of my friends would have been babbling incoherently, crying a lot, and having bodily fluids being expelled from both ends. This is primarily because, apart from Jade (who was 3), most of them were at that age where they were just discovering alcohol. I was having a casual time; I was in that loooong summer holiday period between finishing school and starting university. Conquering empires in Civilisation, taking Gateshead into the then-first division on an early football management simulation game, singing and dancing barefoot along to 10-year-old pop songs in the comfort of my own living room espied by no-one, and writing what I might later call ’emo’ poetry. I had my first kiss too, with my penpal from Wales called Louise, although unfortunately that kind of ended badly. But in general, life was peaceful and I was more concerned with the possibilities of my immediate future rather than anything deep and meaningful.

Others, however, were not so lucky. 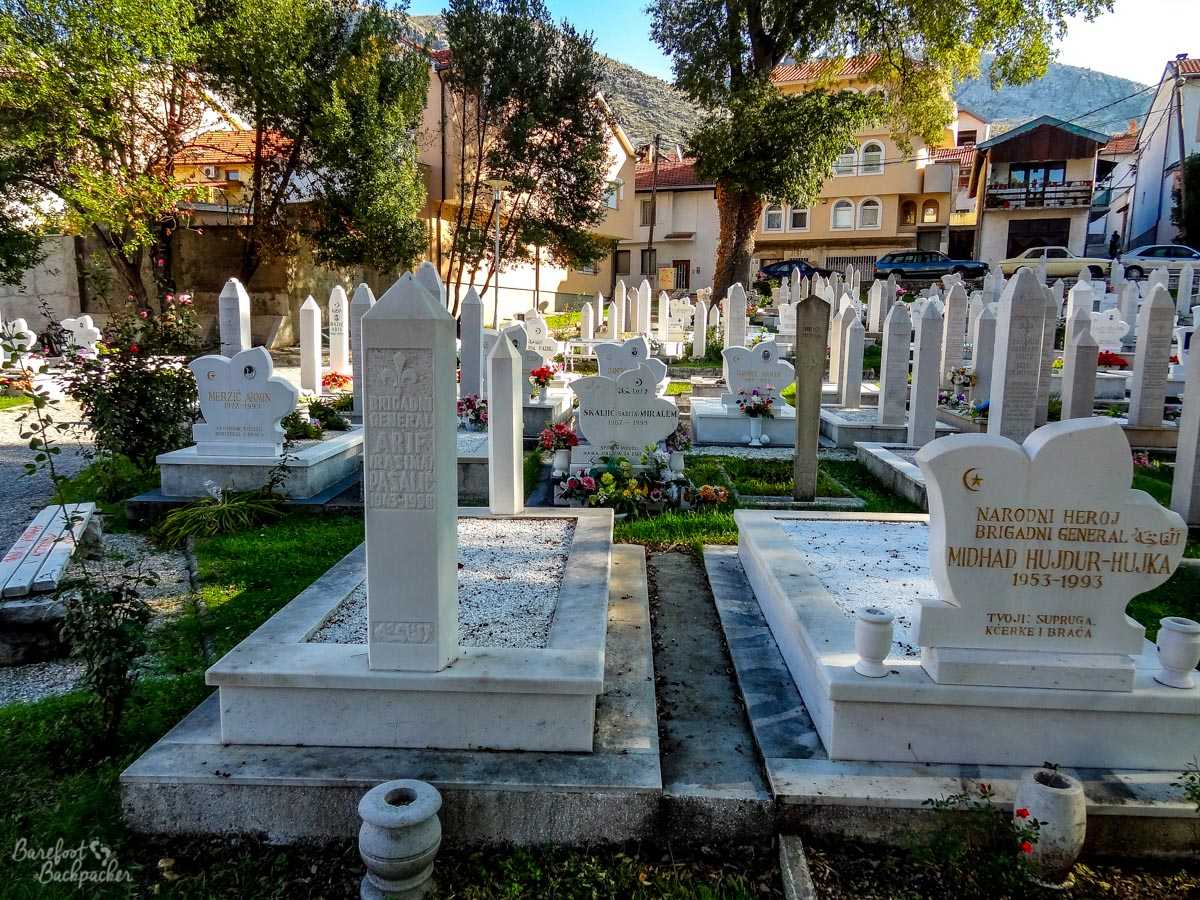 A graveyard in Mostar.

Sarajevo and Mostar. Even today, the two towns are synonymous in many people’s minds with war and destruction. There are large cemeteries across both towns filled with the graves of people who died fighting in the Balkan Wars in the 90s – indeed one in Mostar seemed to be full of those who died specifically between July and September 1993, and most of them were Bosniak (Bosnian Muslim). Nearly all the gravestones were pillars/obelisks, in almost pure white marble. Cold. 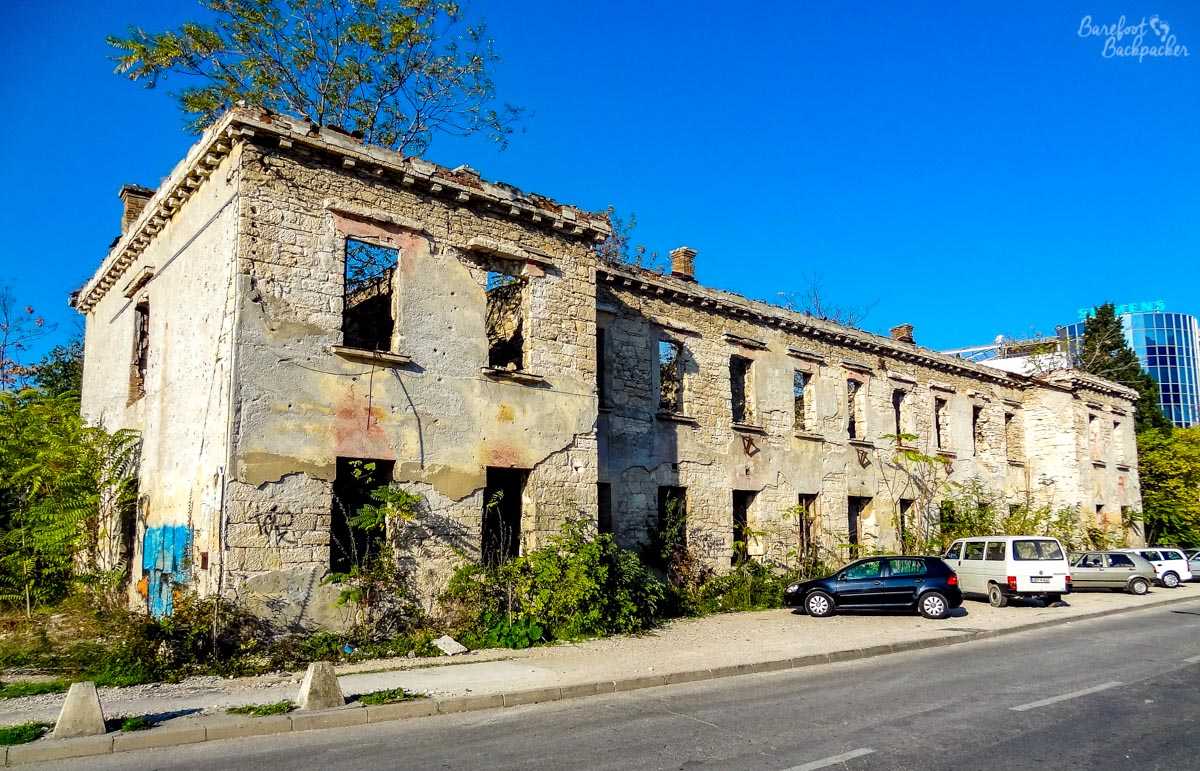 one of the buildings in Mostar –
not repaired after 20 years.

Mostar also has the feel of a town that has never quite recovered from the war. Buildings stand still in ruins, with the large holes blasted in them having never been repaired; a relative dearth of shops, restaurants, any of the normal trappings of a modern functional town; few tourist provisions, hotels, etc. Indeed despite visiting in what ought to have been a busy time of day, there seemed to be incredibly few people around at all. For such a potentially beautiful place, it really is very under-utilised. The war’s over, people, Bosnia’s a perfectly safe place! 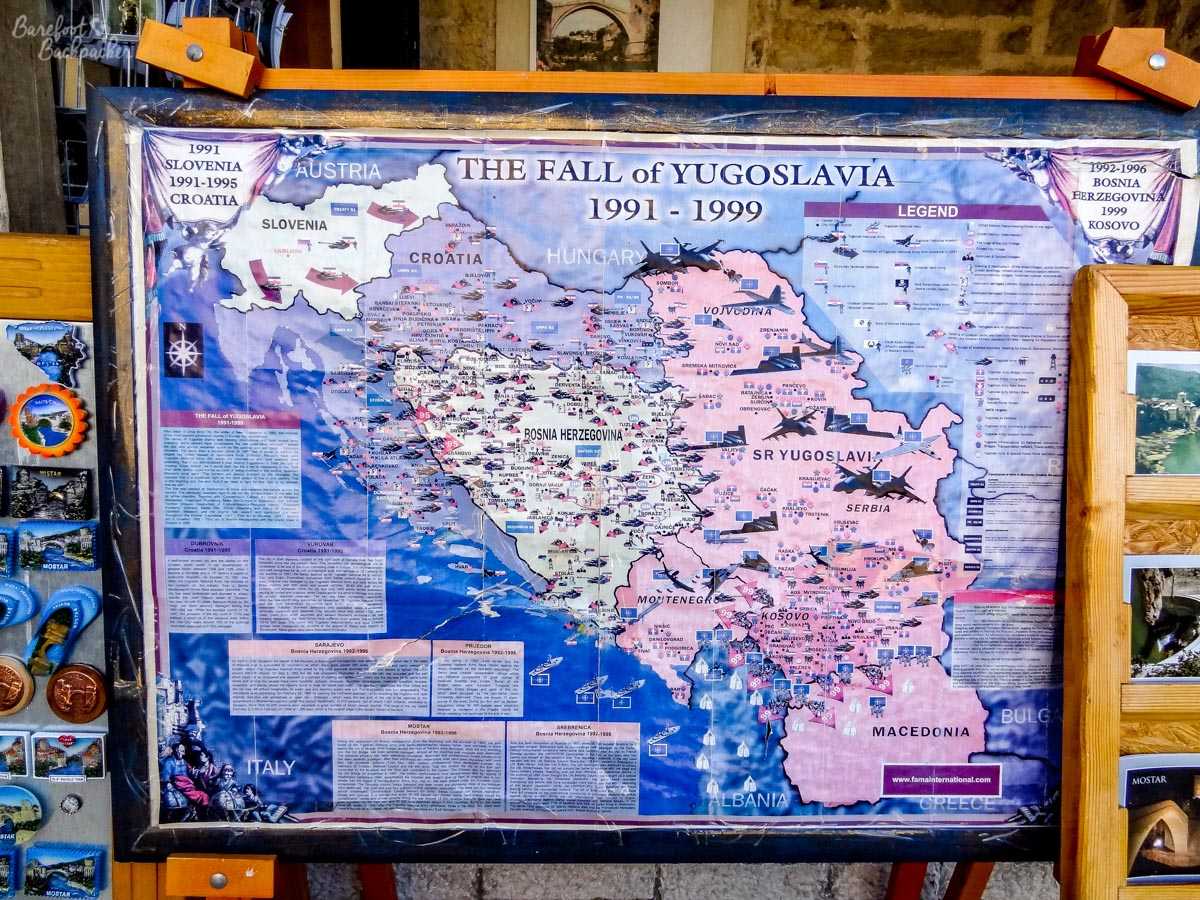 A rather detailed map of the battlegrounds and movements of the 1990s Balkan War.

Sarajevo is, for want of a better phrase, ‘more developed’, but it still clings to its troubled past like a child in the war (any of several) would cling to their blanket. Due to its location on a river in a valley, in one of the few easy passes over the mountains, the city has been a central focal point for much of European history, and many of its attractions cater for this bent. 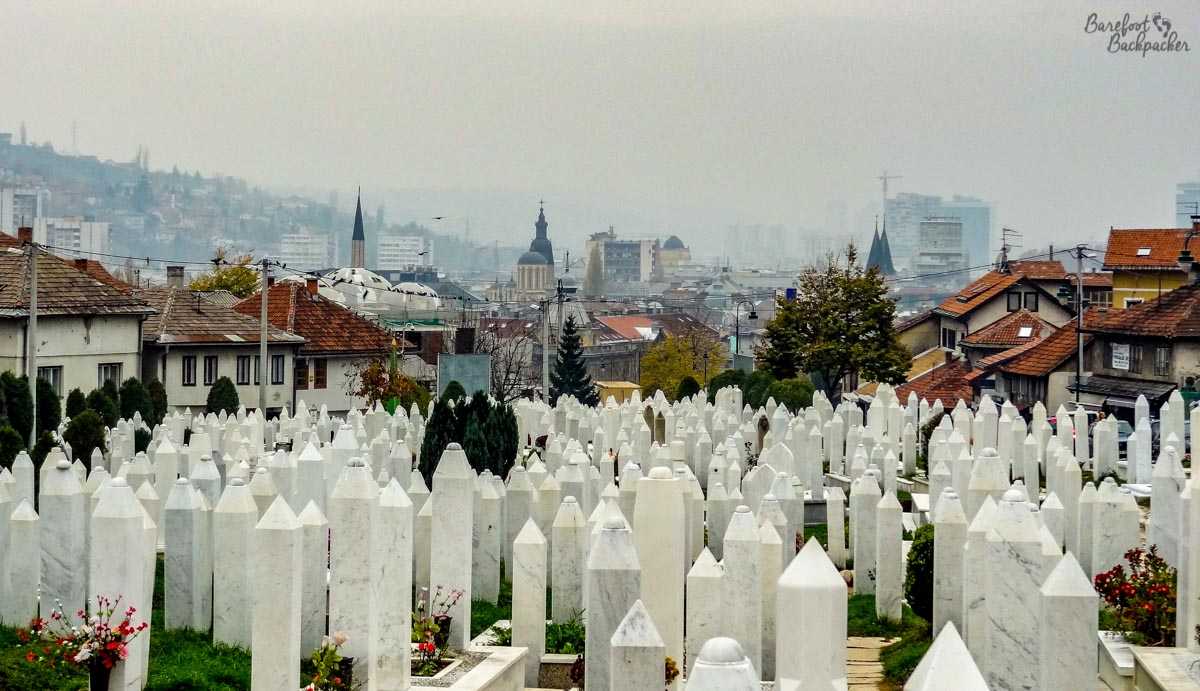 A graveyard in Sarajevo, overlooking the city.

In a non-descript building in Sarajevo, and related to the Balkan Wars in the 1990s (as opposed to the two in the 1910s), is the museum simply entitled ‘11.07.95’. This was a very in-depth exhibition dedicated to the build-up to, events on, and consequences of, the events of that day near the small, insignificant, town of Srebrenica. Aside from being a good base for country hikes, it’s a name that will forever resonate with the wars in the 1990s.

There’s not much I can say that hasn’t been said already, somewhere. Suffice to say that the exhibition went into detail. Great detail. Perhaps too *much* detail. It plotted the course of events from July 5th to July 19th 1995, how it happened, what happened, why it happened, why nothing was done about it … not just text but voiceovers, images, filmclips (source material included the War Crimes Trials at The Hague, as well as filmclips shot by Bosnian Serb Army. That wasn’t all they shot, either. Yes, I told you there might have been too much detail …). The rest of the exhibit is simply pictures, faces of people who died (as like The Killing Fields), pictures of relevant graffiti, pictures of objects; there are also some testimonies of people who lived through it, who were there, who lost family … It’s interesting that although everyone associates the name with the massacres, it turns out very few of the killings actually took place in Srebrenica itself, but rather in villages and locations in the area.

Also in Sarajevo is a monument to the children who died in Sarajevo during the war, complete with an eternal flame. Because sometimes genocide just isn’t enough. Sat there for a while musing on the ephemeral nature of life and the pointlessness of existence, and just how people, as a general thought, are too selfish to ever create lasting peace and harmony. 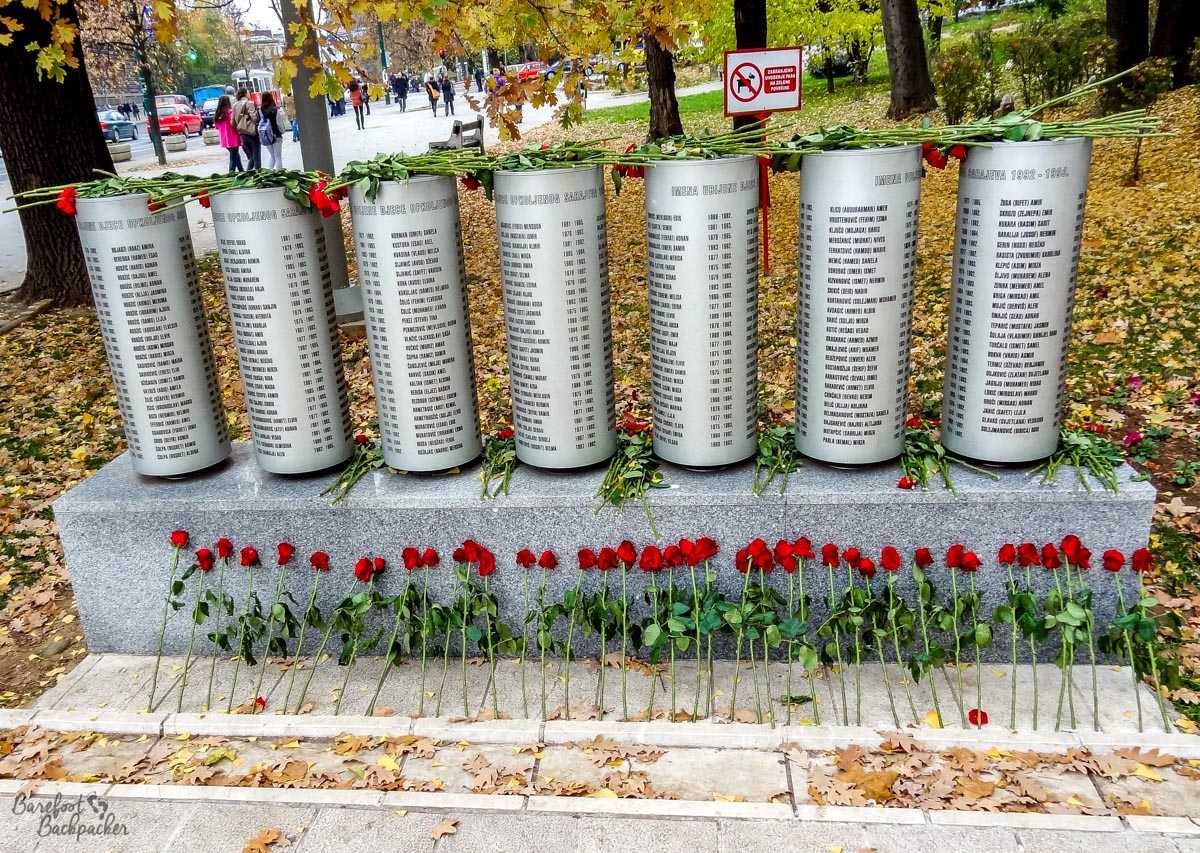 List of children killed in the 1990s Balkan War, Sarajevo. 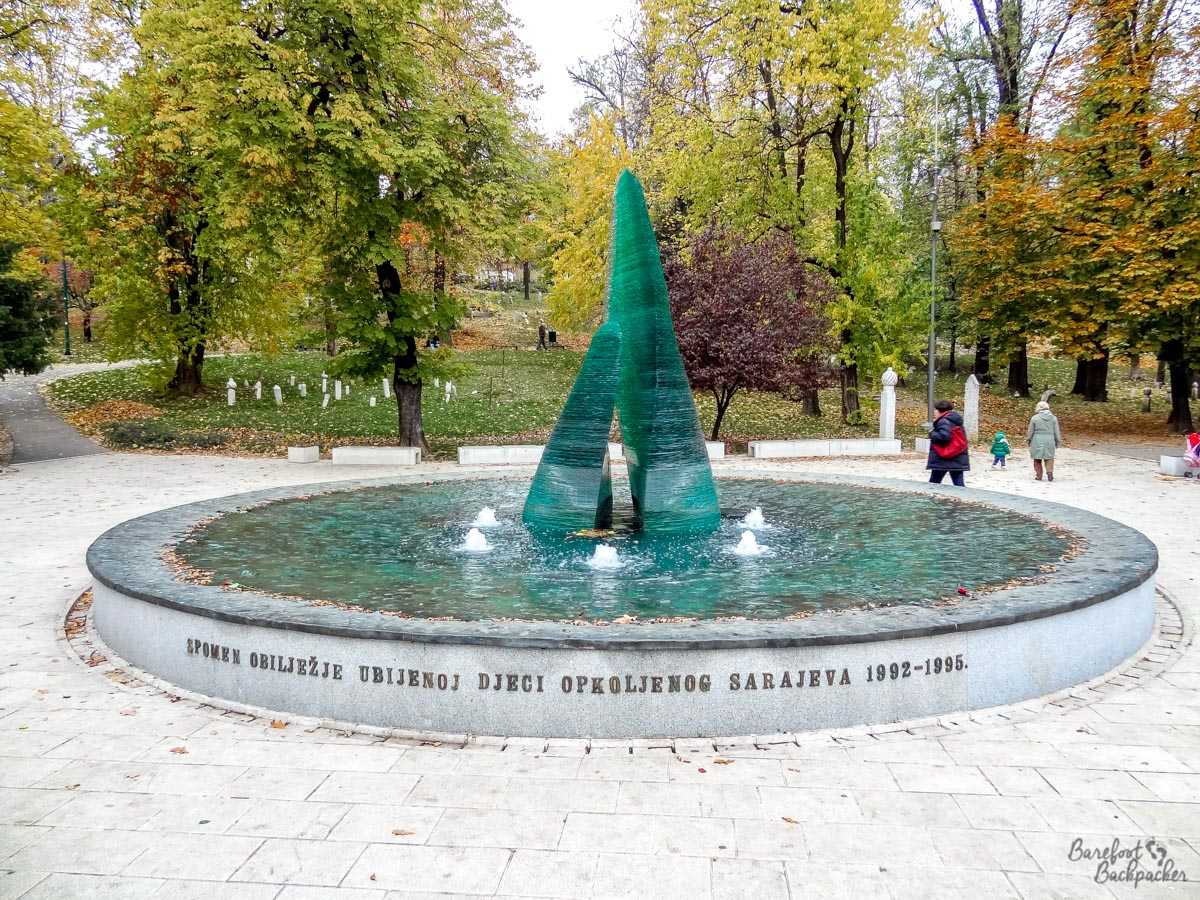 Monument to those children killed in the 1990s Balkan War, Sarajevo.

Of course Sarajevo is much more than recent war; indeed death and destruction are an ever-present in this city. On a road near to the river is the “Sarajevo Museum” (though note that the exact name seems to vary depending on which signpost you followed). It’s located pretty much on the exact spot of the most famous assassination in history – that of Archduke Ferdinand of the Austro-Hungarian Empire in late June 1914 that set off a chain of events that kicked off the First World War.

The Latin Bridge. At the far end, outside the Museum, is where the shot took place.

The museum itself predominantly concerns itself with life in Bosnia/Sarajevo between 1878 and 1914 – displaying period clothing, furniture, medals and decorations of sports clubs, photographs, and city ordnances of the time, plus (I presume a replica of) Gavrillo Princip’s gun. It’s actually pretty neutral in terms of saying what happened (unlike, say, a museum in Ljubljana would be…), and sticks clearly to the facts – the archduke wasn’t even supposed to be going down that road and it was a lucky break for the assassin Gavrillo Princip. That said, the Archduke was already supposed to have been dead by that point – a previous would-be assassin didn’t quite connect with a grenade bomb – while the outcome would have been the same, the world’s most famous bridge would have been one block down the road. Whereas there isn’t even a marker or plaque to tell you that that was where he missed. The ‘Latin Bridge’, conversely, is full of tour groups. 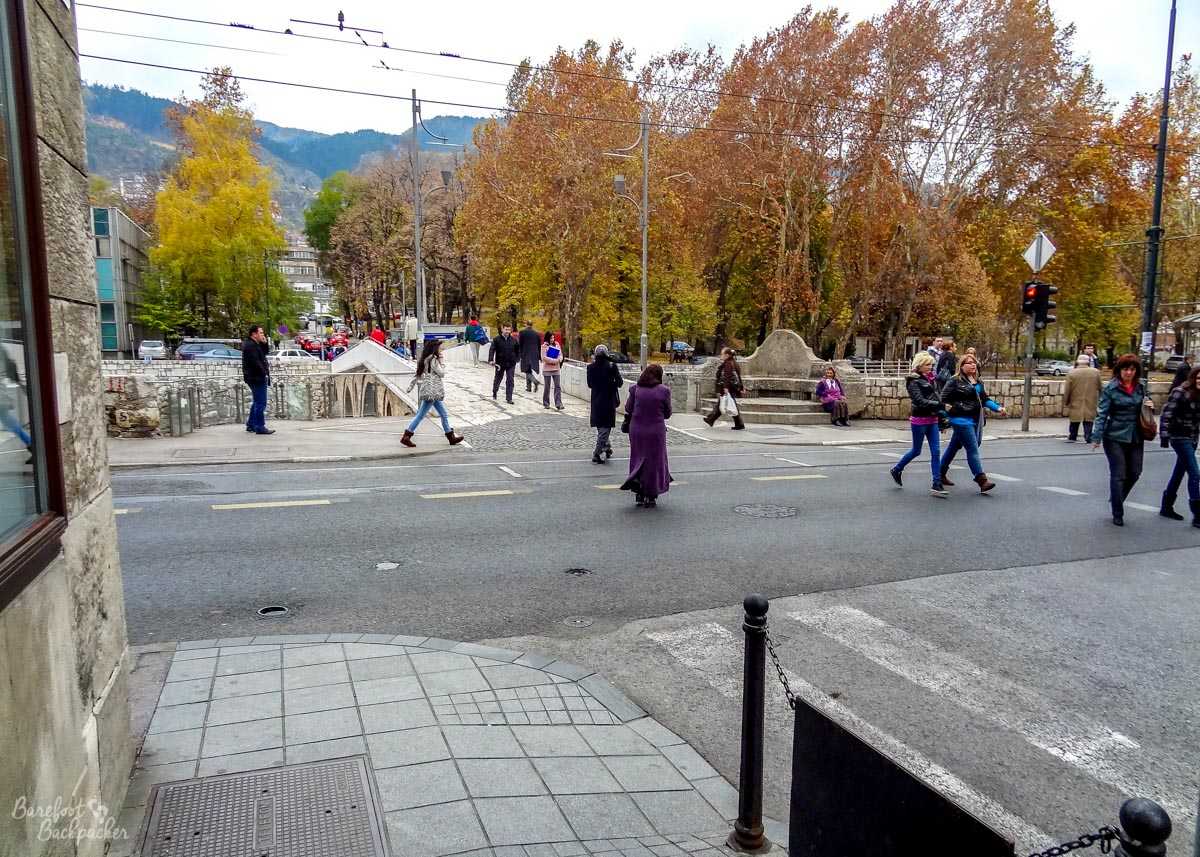