Novi Sad is Serbia’s second biggest city, around 80km from Belgrade and the train takes about 90 minutes. It stands further upriver on the Danube, towards Hungary and the (boring) Pannonian Plains.

Its name means ‘New plantation’ or ‘new fields’ – presumably in relation to it being an expansion of the settlement on the other side of the river, surrounding the fortress of Petrovaradin, which itself is built upon a rocky outcrop with great views of the River (yay!) and the Pannonian Plain (not yay!).

In 1999, all the bridges were bombed by the USAF, but had been mostly rebuilt by March 2000, something that would never have happened in the UK (we’d have gone through 5 rounds of design applications before the whole rebuild would have collapsed due to some obscure planning legislation!). 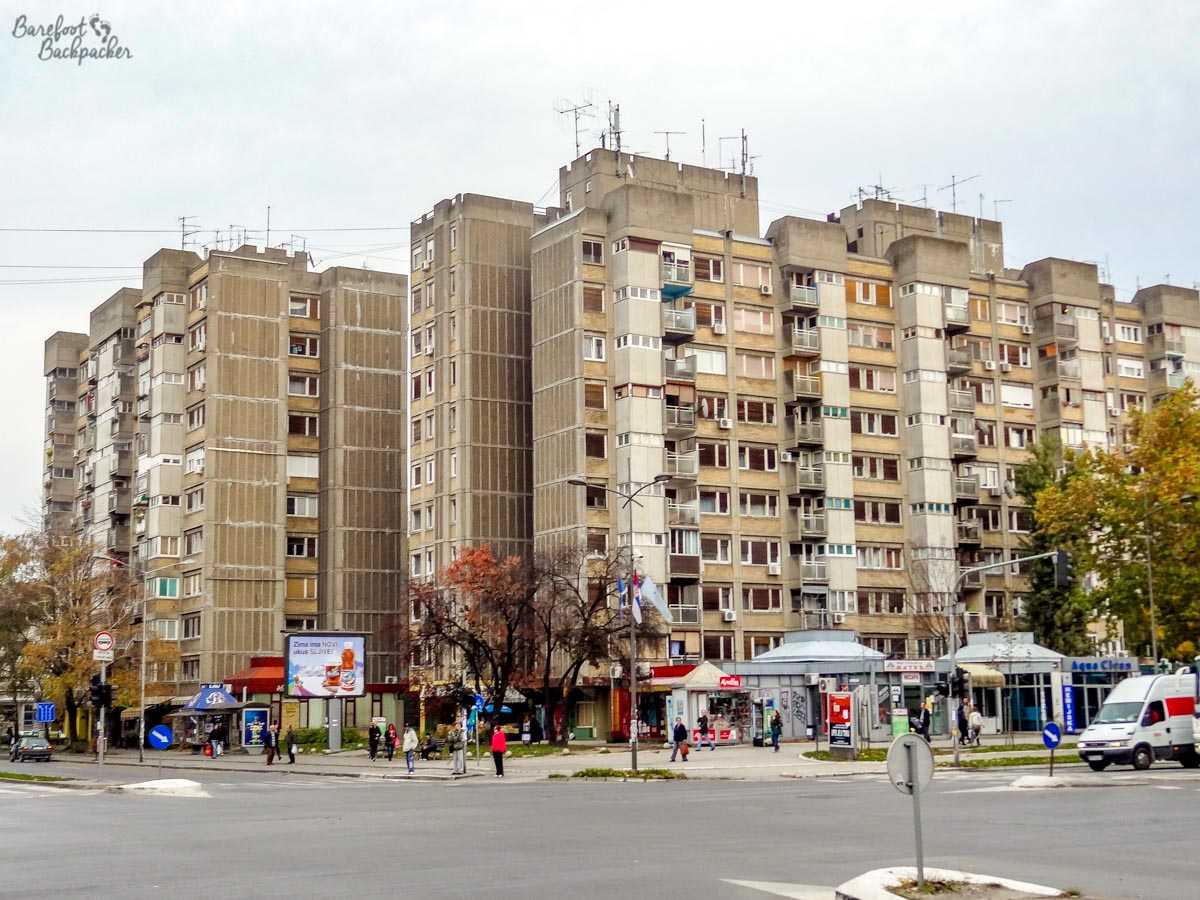 When coming out of the railway station, the first impressions of the town are a bit stereotypical – wide roads, people wearing thick coats, and rather ugly concrete buildings. Add a bit of snow and it would have looked exactly like a communist metropolis somewhere in Siberia! More towards the city centre though the buildings liven up and the main square is surrounded by artistic architecture and a very nice church with a tall spire. Many of the signposts are in Serbian and English, as are the menus in some of the restaurants, which suggests that they expect a reasonable number of tourists. 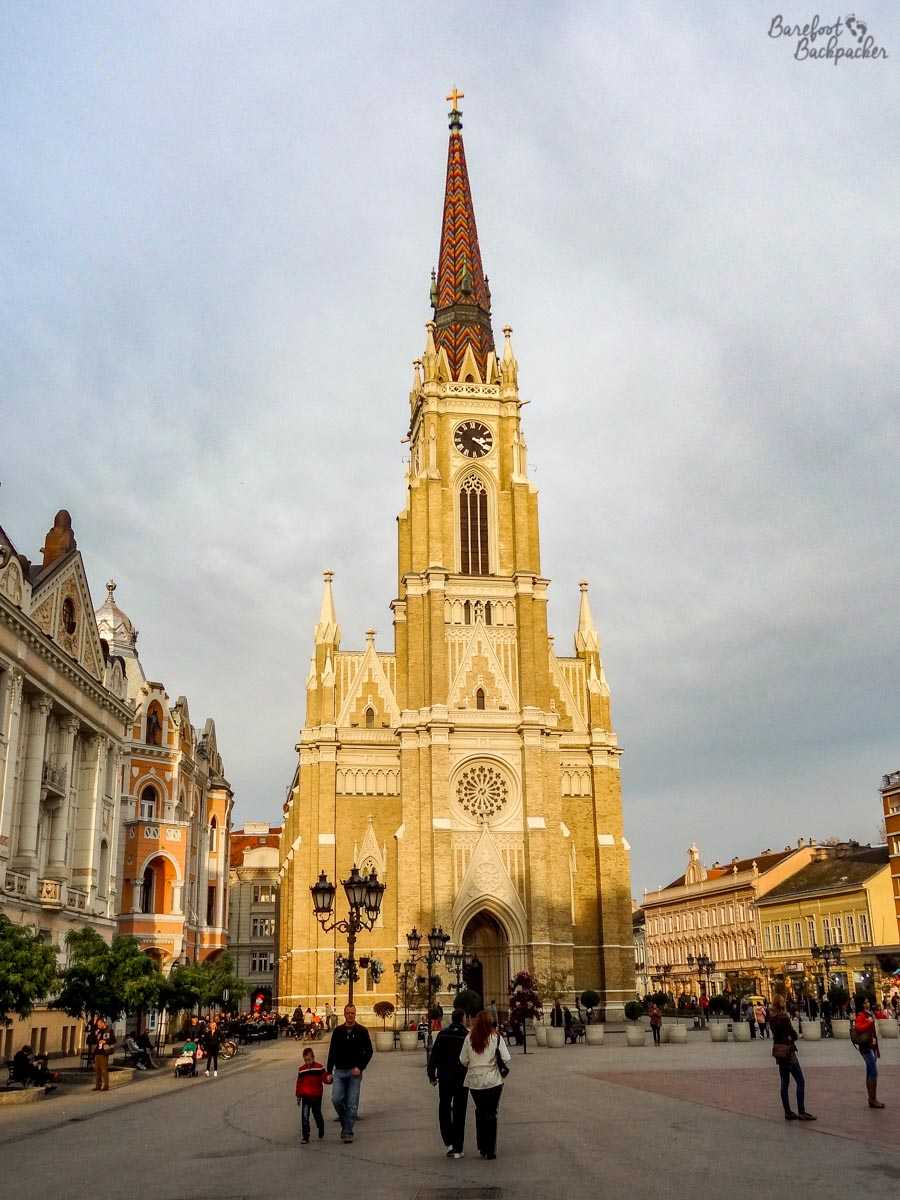 The main church in Novi Sad. 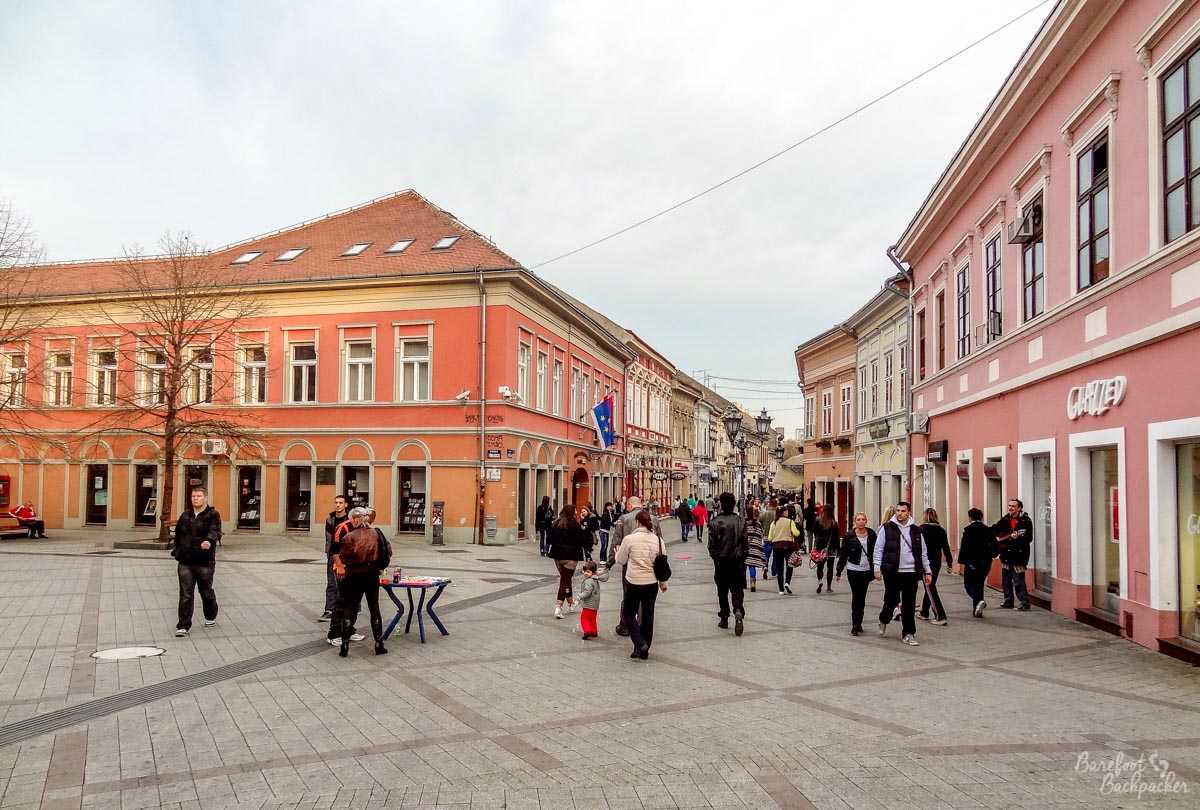 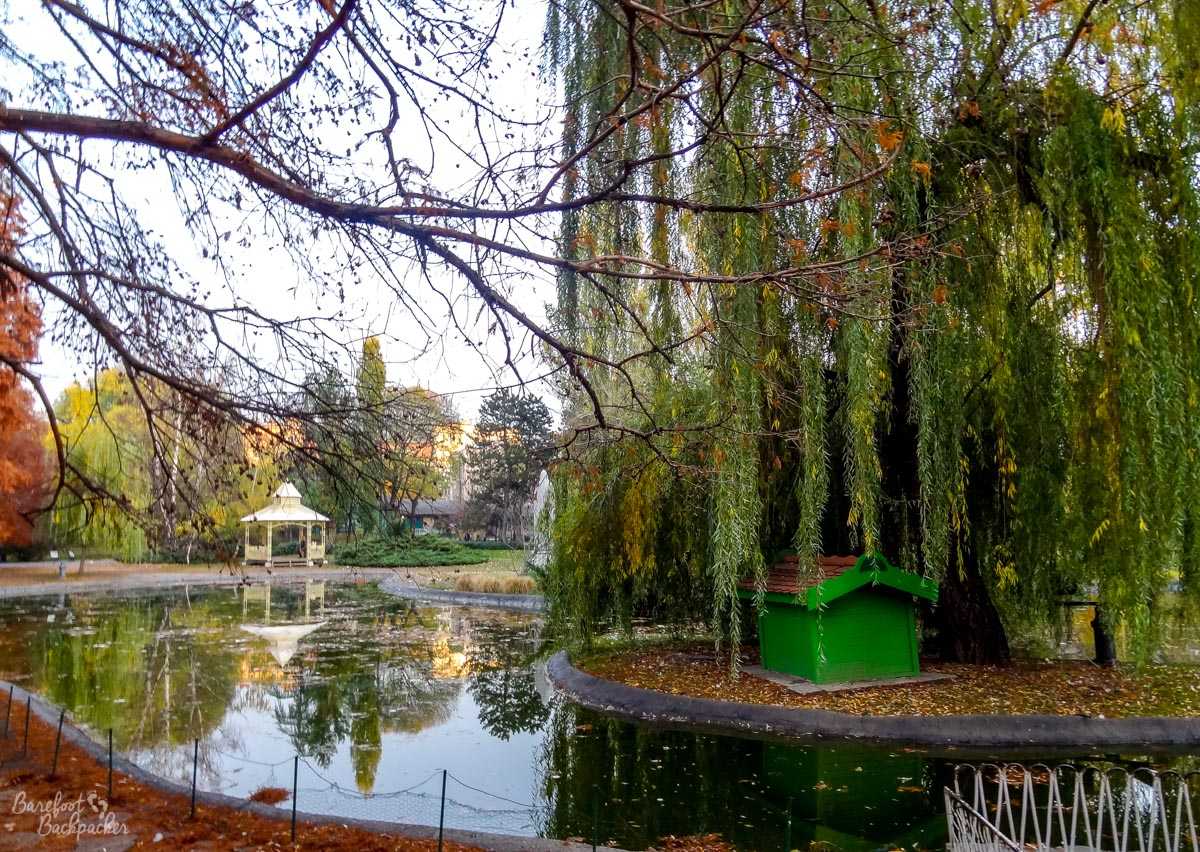 The main park in Novi Sad.

Now, to be fair, Novi Sad is apparently famous for a music festival – the EXIT festival, held in summer every year and often regarded as one of the best music festivals in Europe. Founded out of the student social protest movements in the late 1990s/early 2000s (cf Otpor for another aspect to this – I used to have an Otpor poster in my house!), it’s grown to be really well known and popular. Except that obviously, I’d never heard of it … 😀 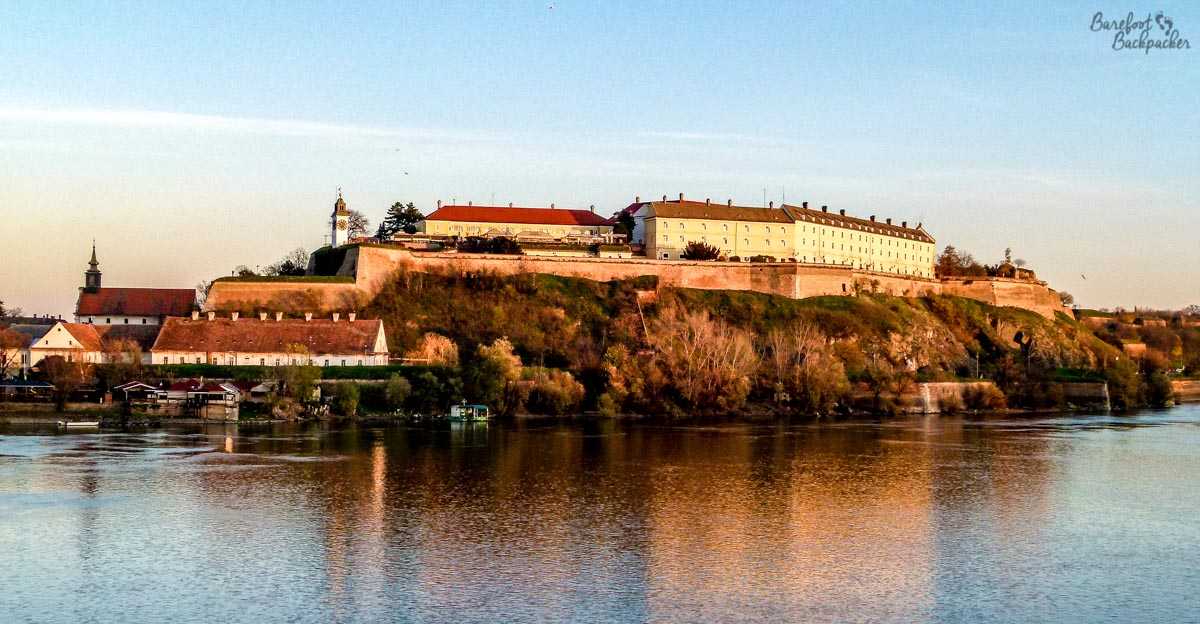 The view of the Petrovaradin Fortress. Rare pic not by me, but rather by my friend from Beograd (Jelena).

The main site/sight in the city is the Petrovaradin Fortress. The current buildings were originally constructed at the back end of the 17th Century, although the area’s been a stronghold of sorts since pre-Roman times, with both fortifications and monasteries occupying the area for centuries prior. Its location is important, not just because it stands on top of a tall ridge, but also since it lies on the very edge of what was the Austrian empire. Indeed it was the site of a large battle in August 1716 between Austria and the Ottoman Empire – the Austrians won the battle and pretty much stopped Ottoman attempts to advance deeper into Europe for from time; indeed the fortress itself was never again assaulted by Turks. 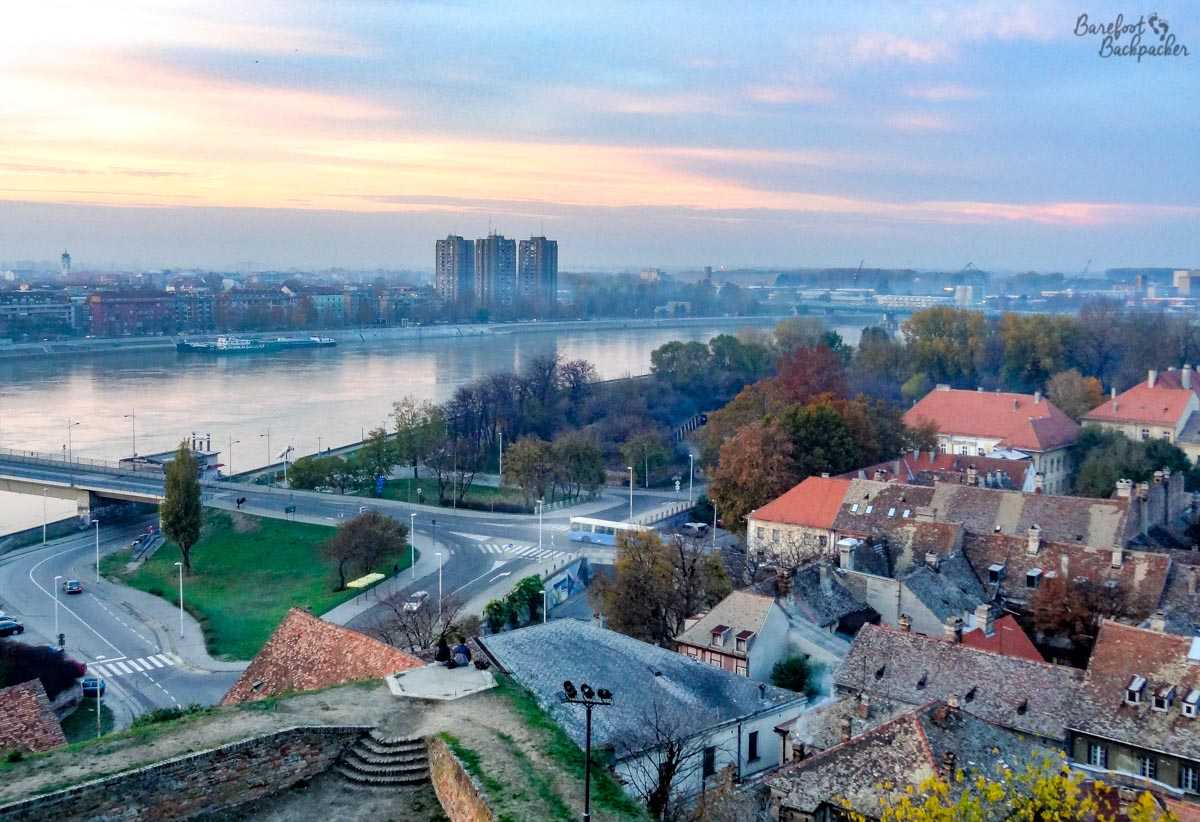 The view from Petrovaradin Fortress, looking over Novi Sad.

At the top of the hill there is an unusual clock that tells the right time, but in the wrong way (its big hand and little hand are reversed, so the big hand shows the hour and the little hand shows the minutes). Apparently this was done to make the clock easier to read from afar (since the hour is more important than the minute) so from a distance, it’s easier to see what hour’s being shown. 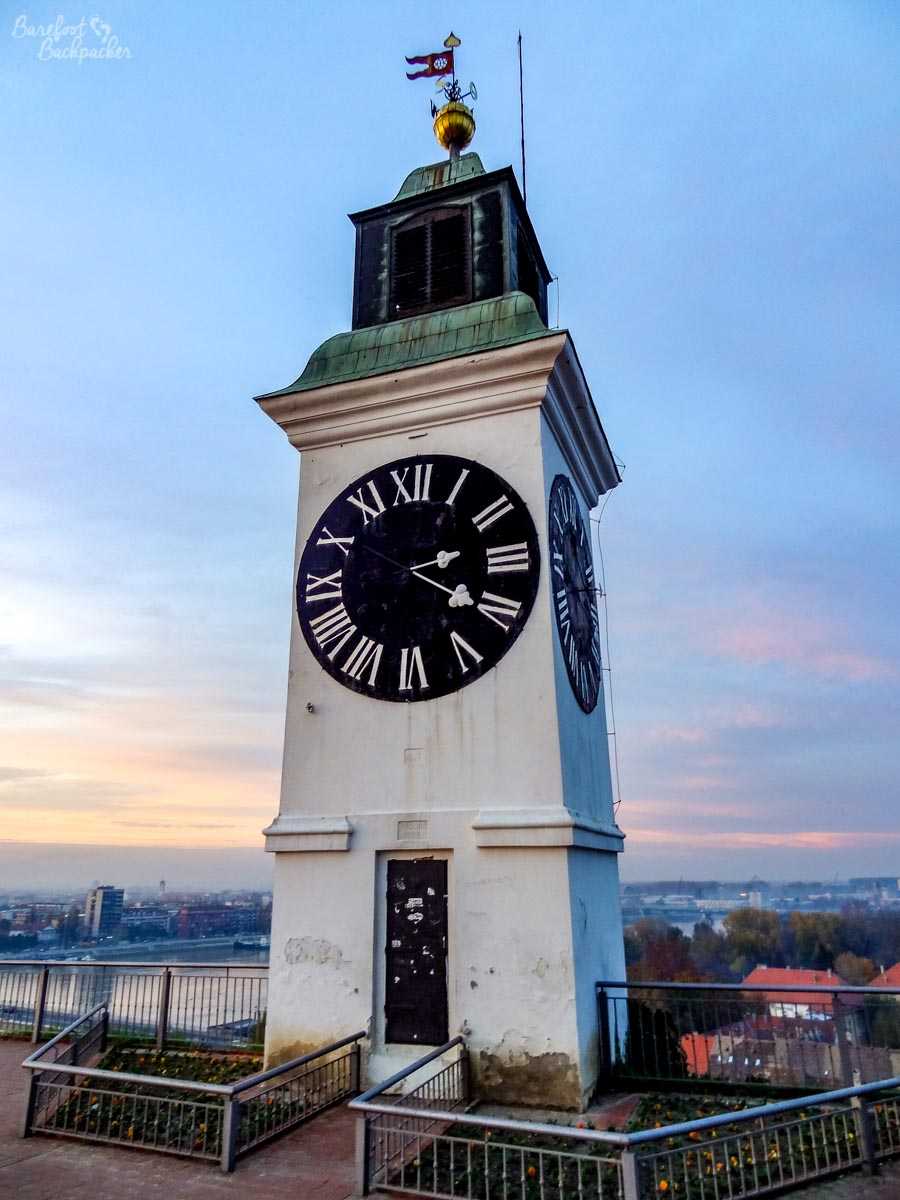 The clock at Petrovaradin Fortress, with the reversed hands.

The city centre has free wireless internet but I have to say I found the signal to be ‘weak, bordering on refusal’ during my visit; this was a few years back now though so things hopefully have changed.

One thing that hopefully hasn’t changed is the food/drink. We went to Pivnica Gusan (its name means the “Goose/Gander Brewery”). I had a beer from Lav brewery called “Dark” – it was hoppy, with slightly roasted malts, watery rather than thick, quite traditional 70s beer in feel. Food involved something traditionally Serb-ish, ‘Karadjordjeva Šnicla’ – chicken and melted cheese inside breadcrumbs, about the length and shape of a sausage roll.

One thought on “Novi Sad in a few hours”