Ahh, Laibach. But I’m not here referring to the Industrial/Experimental music group/culture founded in the late 80s/early 90s who had a habit of producing very dark/bleak versions of classic rock tracks (check out their version of ‘The Final Countdown’ to see what I mean!). Rather, I’m referring to what they are named *after*; the city of Ljubljana – Laibach being the old German name, when it was part of the Austro-Hungarian Empire.

My first impressions of Ljubljana (I wish it was still called Laibach – much easier to spell) were that it’s a really nice city; small, compact but quite quiet and felt very safe (apart from the battalions of cyclists who dominate every road junction), possibly it could even be regarded as romantic. Its vibe and laid-back charm reminded me a little of somewhere like Bruges but with fewer tourists – a little quirky but definitely understated. The ‘next big thing’ maybe? 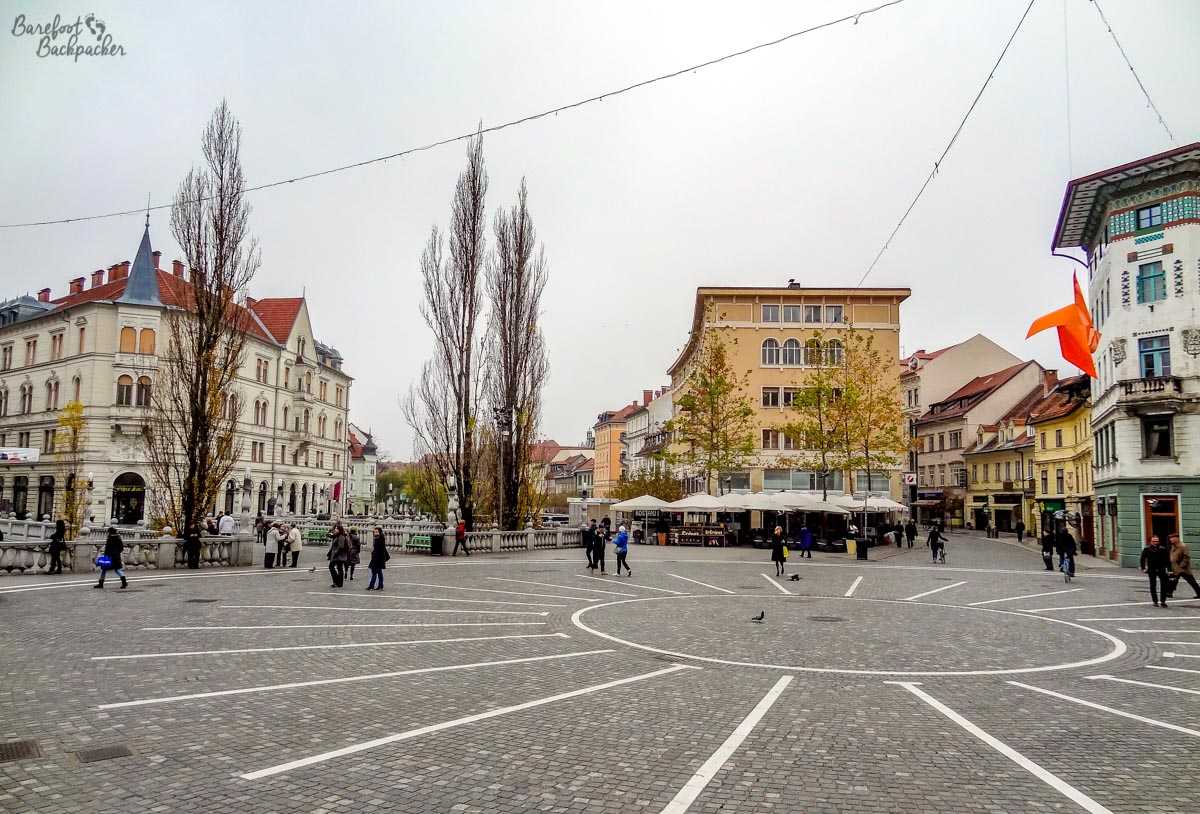 The main square in Ljubljana.

It also took me until nearly the end of my visit to work out the theme of the city (I’m really not very observant!), so:
* ‘Dragon Bridge’ is on the East side of the city centre; it’s called so because at the entrances and along the sides are sculptures of green dragons.
* Dragons appear in crests, on a couple of buildings, and, indeed, on postcards.
* St George is one of the main venerated saints here. 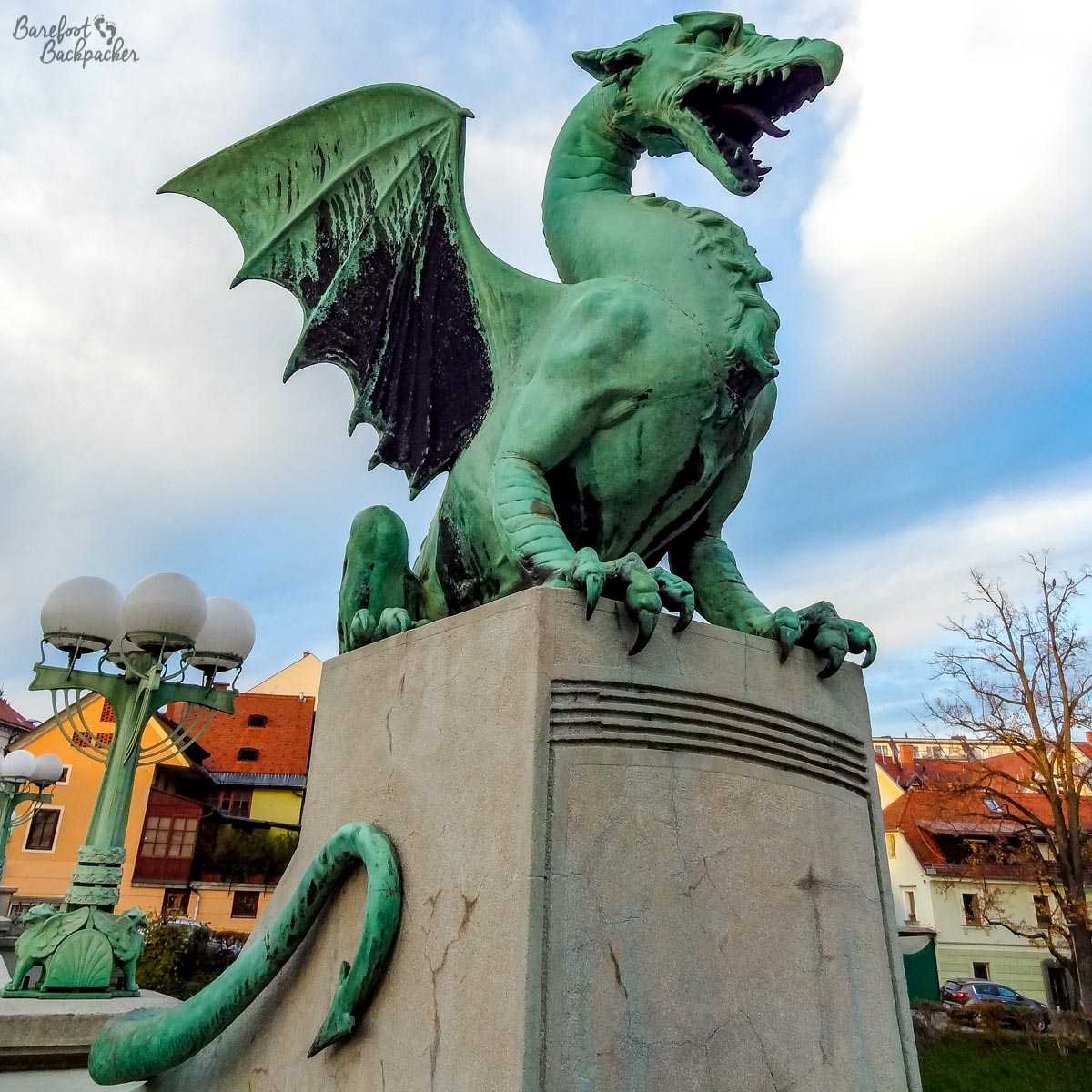 Green Dragon in place atop a pillar at the end of the ‘Dragon Bridge’.

It turns out (as I was reliably informed in a 12min film overview of the history of Ljubljana Castle, narrated by a fire-breathing Green Dragon – aficionados of early D&D will note the discrepancy here, as it’s widely known that Green Dragons breathe chlorine gas or acid; Red breathe fire) that there are two myths with regards to very early history of the surrounding area. The first is that this is the place where St George killed the dragon. The second is that this was the place where Jason (of Argonauts fame – it’s unclear if by this point he’d embarked on a solo career) killed a dragon whilst fleeing from Colchis with the Golden Fleece. The dragon himself denies this – claiming he fled from the large lake that existed in the area and hid in the mountains where he remains to this day. But since he doesn’t even know what he breathes, who can say how much of his account can be trusted… 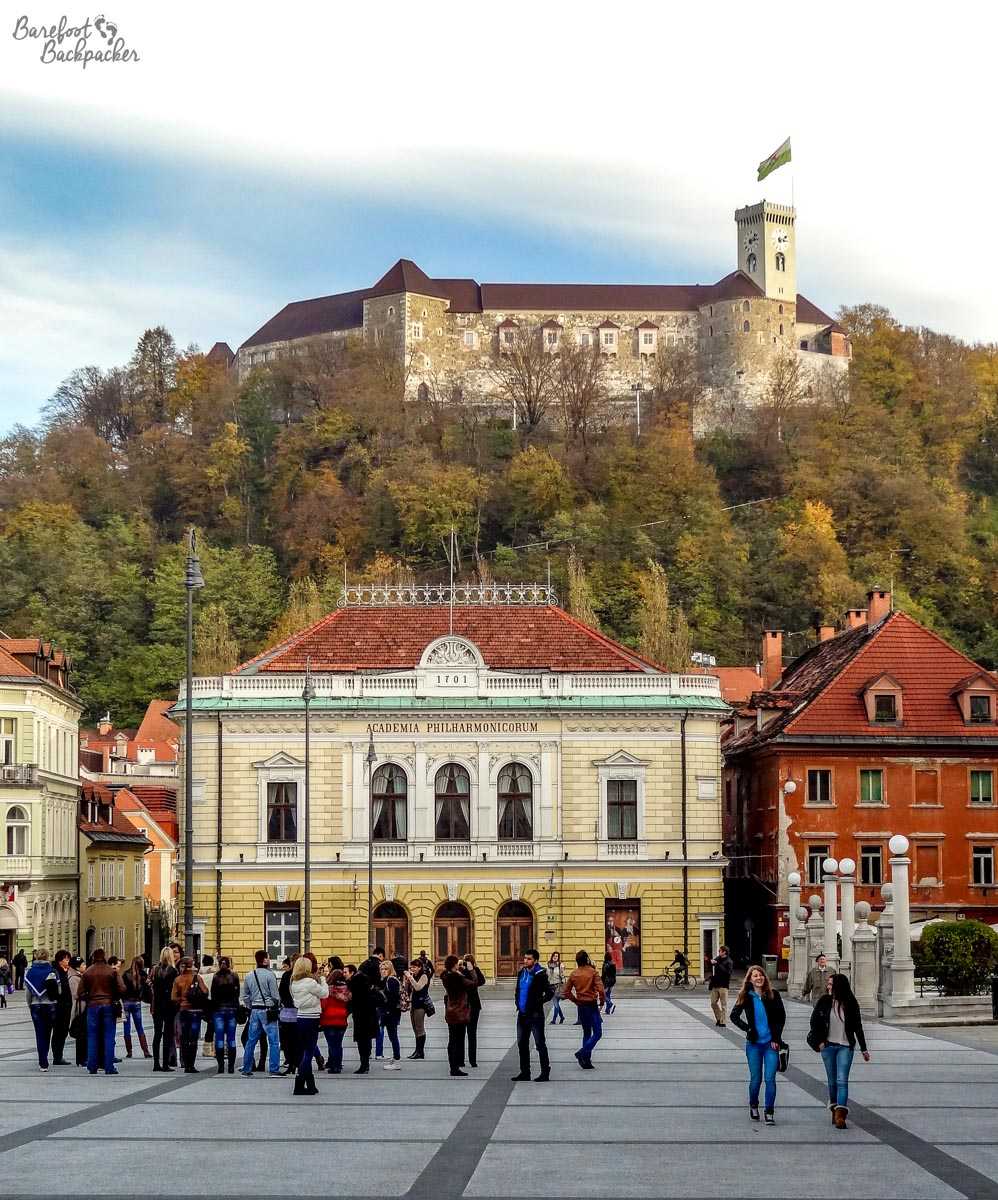 Ljubljana Castle on top of the hill, as seen from below.

Where was I? Ah yes, Ljubljana Castle. It’s not really a ‘castle’ as we might know it in the UK – historically it’s been a hospital, army garrison, royal residence, rebuilt at least twice … it’s now a small series of connected buildings (function rooms, mainly) surrounding a large courtyard where I arrived too late for a wine festival to celebrate St Martin’s Day. It contained a museum of Slovenian history that was quite interactive, and a tall watchtower, from where you can look out over the city; I was there at dusk but it was still a great sunset view; the clear skies meant I could see for miles around. Note that the only other two people up there at the same time were less interested in the view and more interested in each other’s mouths … told you it felt romantic! 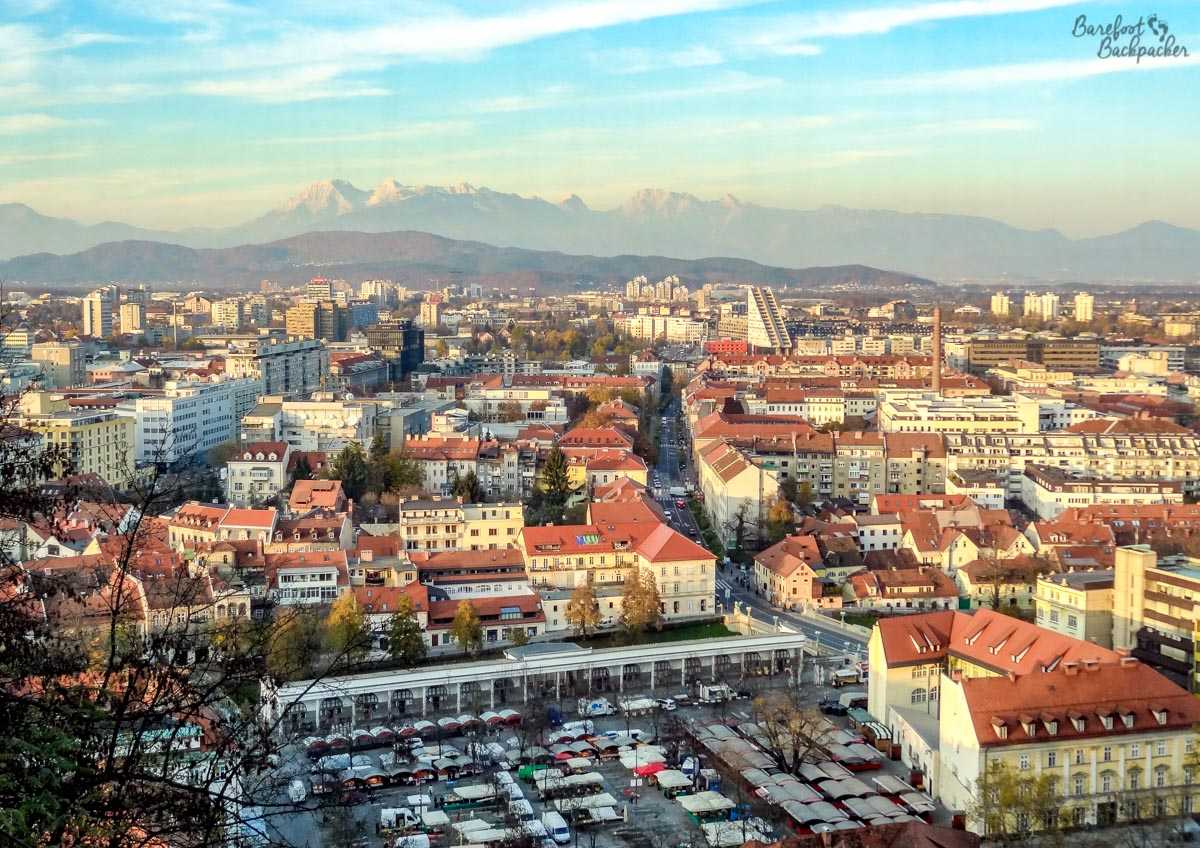 The view over the city from the ramparts of Ljubljana Castle.

This part of the world has been controlled by many empires and countries over the years – another historic museum in the city, the “Museum of Contemporary History”, goes into this in a bit of detail, taking you on a tour of 20th Century Slovenia and its external players: firstly the Austro-Hungarian Empire and Italy (who have always coveted it), then through its forcible union into the ‘Kingdom of Serbs, Croats, and Slovenes’ which later become Yugoslavia (after the monarch dissolved parliament because one of the Serbian deputies shot one of the Croat ones. You can’t ever imagine that in the UK, no matter how bitter the fight for Scottish Independence becomes!), then through its virtual eradication in WW2 as Italy, Germany, and Hungary divided it up between them and tried to de-Slovenify it completely, through the dodgy years under Communism (the communist-led Partisans liberated it during WW2, and took over. Lots of people died in the immediate post-war aftermath), all the way to the declaration of Independence and Europeanism. Obviously it was a little bit biased … Slovenia *might* suffer from ‘small dog syndrome’, in that being a small country, it has to try and prove itself to be a big player on the world stage.

Apart from the Contemporary History museum, there’s a couple of other museums and art galleries in the city that initially piqued my interest – although visiting them made me realise what I appreciate in a museum/gallery.
The ‘Ethnographic Museum’ was interesting – but I felt had two problems with it. It felt a little ‘detailed’ (and repeated much of the information in the Contemporary History museum); it was also labelled predominantly in Slovenian so I didn’t get as much out of it as I should have done.
It had three floors – the first floor had a whole series of exhibits about the self; the individual in society, and what people do to both ‘belong’ and ‘differentiate’ – it talked about things like jewellery, the role of symbols like keys and doorways, and contrasting and comparing the way different cultures do the same thing. There were also segments on ‘outsiders’, both Slovenians abroad and immigrants to Slovenia, and how society in general disapproves of people from without.
The second floor depicted culture across the world, with a bit of meta-museumness about this: or, roughly, “we’re going to show you some stuff now, but be aware that museums generally put things in them that are ‘different’ to the society that the museum’s in, which over-emphasises these items and suggests that, for example, all pre-Columbian Caribbean cultures were headshrinkers. Who knows what today’s ‘normal’ items will be over-emphasised in the same way by future generations.”. Deep, somewhat.
The upper floors were temporary exhibits; on my visit one was a rather bizarre and out-of-place thing that seemed to involve objects made out of plastics and detritus (including a couple of motorbikes), whilst the other was a series of ‘vox pops’ on posters; people from many different countries ‘abroad’ discussing life in Carpathia (Austrian region) and how they fitted in there. Again it emphasises the concept of ethnography and culture. 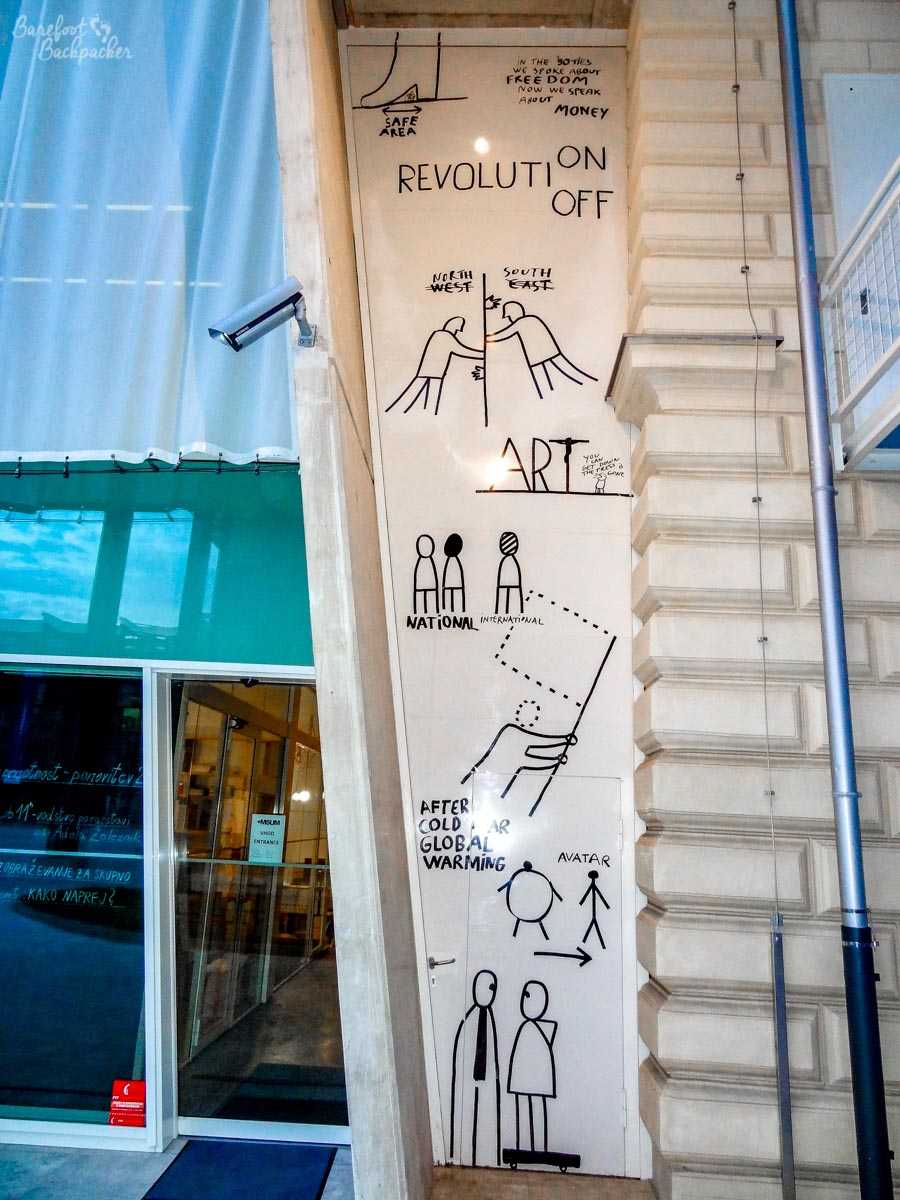 Outside the Modern Art Museum in Ljubljana.

The other museums I visited were art galleries. Mainly, I have to admit, contemporary/modern art. The “Museum of Modern Art” was self-explanatory, and mainly concentrated on Slovenian artists of the 20th Century (there was a whole couple of rooms on the ‘degenerate art’ of Marco Pogacnik and the OHO movement, including their promoting of ‘lithopuncture’ – acupuncture of the Earth, to create random series of stone ‘columns’ driven into the ground. Like needles, yes. It’s all rather ‘new age’-y and … a little odd. My hippy subculture preferences don’t stretch to ramming menhirs into the ground and then hugging them. Just so’s you know. The other aspect of Modern Art present in the gallery was the odd series of, well, I’ll theoretically call them ‘paintings’, but calling something ‘Untitled’ and then making it look like nothing discernible is just pretentious head-up-arse pantyhose if you ask me (Tugo Susnik and Gustav Gnamus, today I’m looking at you. No stars, stay behind after class). 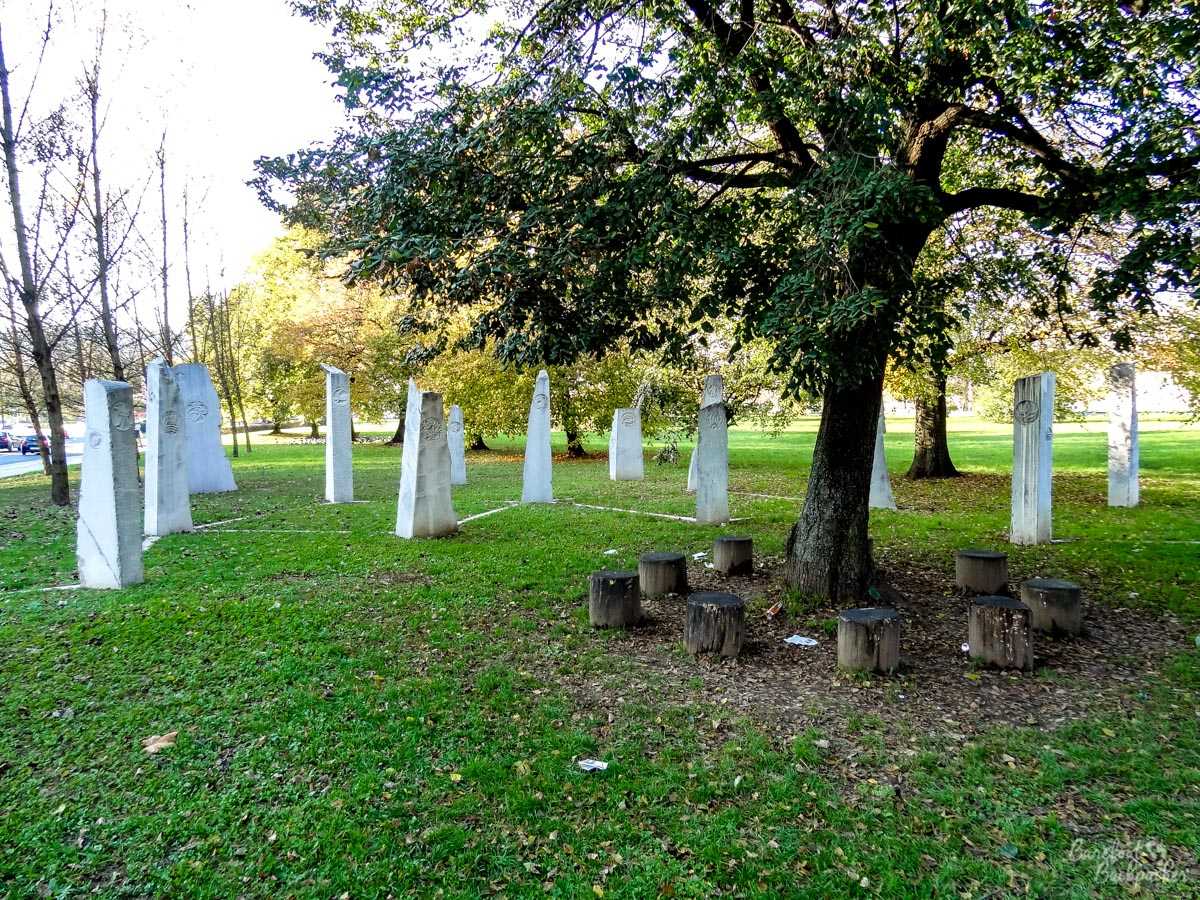 “Lithopuncture” near the centre of Ljubljana. Nope, no idea either …

The “International Centre of Graphic Arts” was similarly ‘contemporary’ but with an Arabic feel. At least most of this had a reason behind it, including the ‘inkless drawings’ of Taysir Batniji (a Palestinian – they were about his brother’s wedding, who later died in one of the Intifadas, so all quite symbolic), and Nazgol Ansarinia, who took the US’ “National Security Strategy Report’ and, uhm, sorted it into alphabetical order. By word. Keeping all punctuation (of the particular word), and all duplicates. And published it. His thought process was ‘there’s a lot of repetition in this report, let’s see exactly how much’. And there is. “terrorism” appears a lot, in many guises and capitalisations.

For more ‘mainstream’ art, there’s the National Gallery, and I have to admit to feeling distinctly underwhelmed by it – this was partly because on my visit about 40% of it had nothing in it (they were in the middle of a refurbishment of some kind) but also because going around it made me realise that virtually every art gallery displays examples of the same old art. You don’t need to go all the way to Slovenia to see 16th Century religious art or a handful of impressionists; unless there’s a specific painting you want to see, you are better off visiting somewhere much more local. 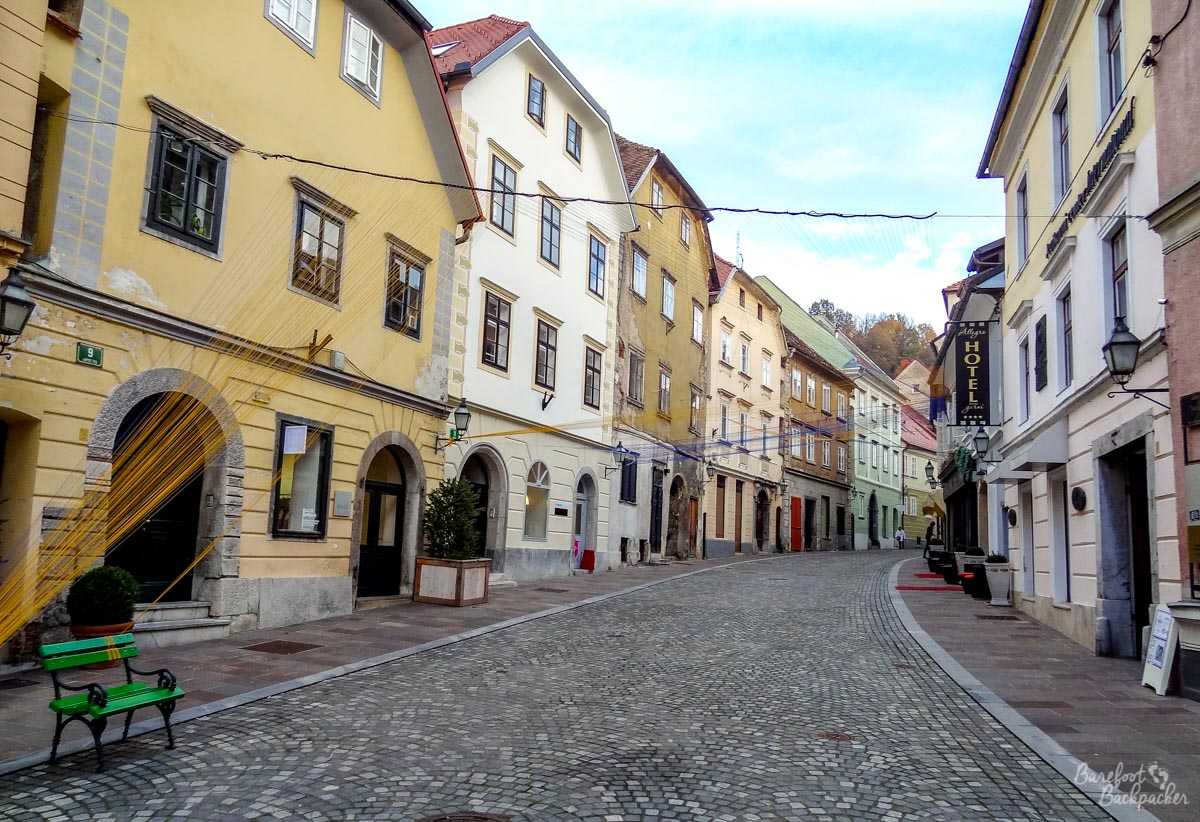 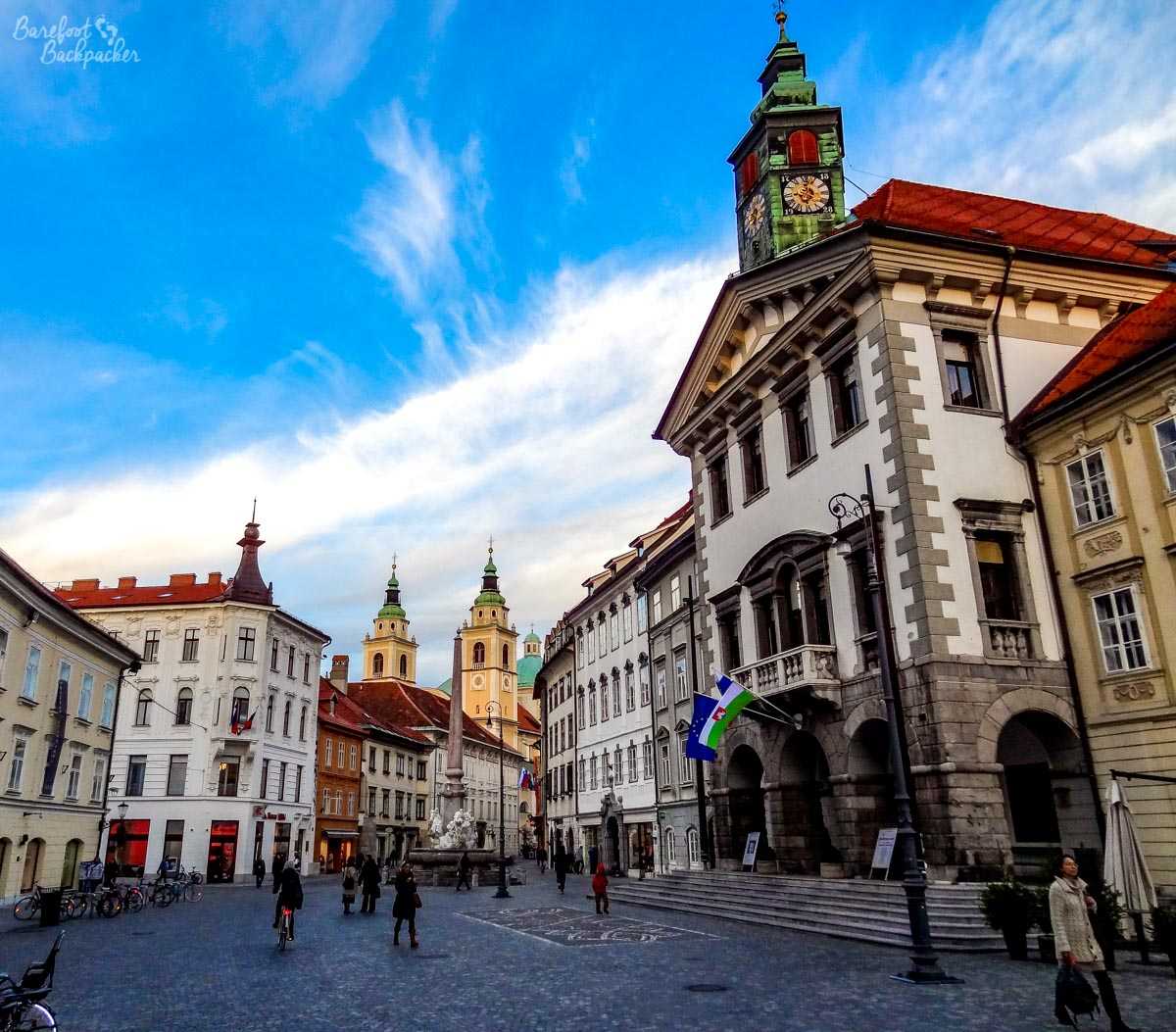 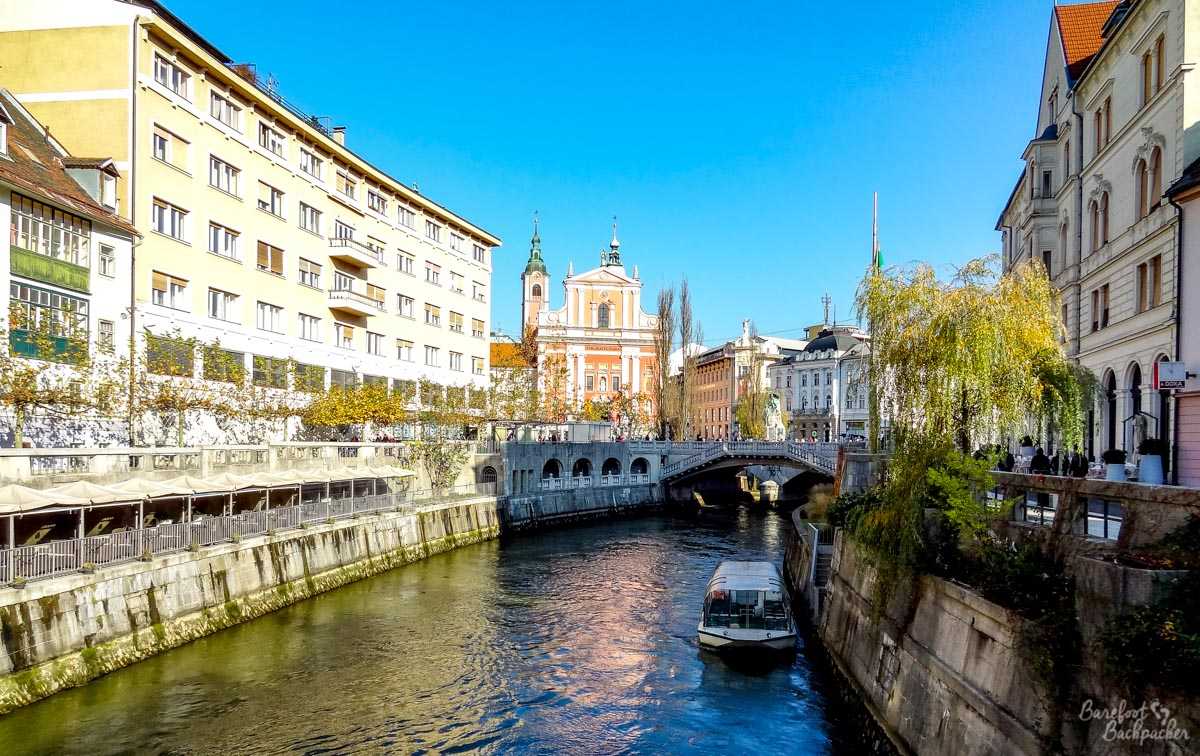 Ljubljana is a lovely city to go walking in. Apart from the old streets and the riverside promenades, there’s a large area of hilly woodland just to the west of the city centre called ‘Tivoli’. It seems to be popular with joggers and old people walking to keep active, and is exactly what a woodland country park looks like the world over. It’s very quiet and peaceful there, and it’s hard to believe that the very centre of the city is maybe 20-30 minutes away by foot from the very heart of the park; even with my quick walking pace, I was there for maybe 2 and a half hours, even going past a green practice ski-slope. 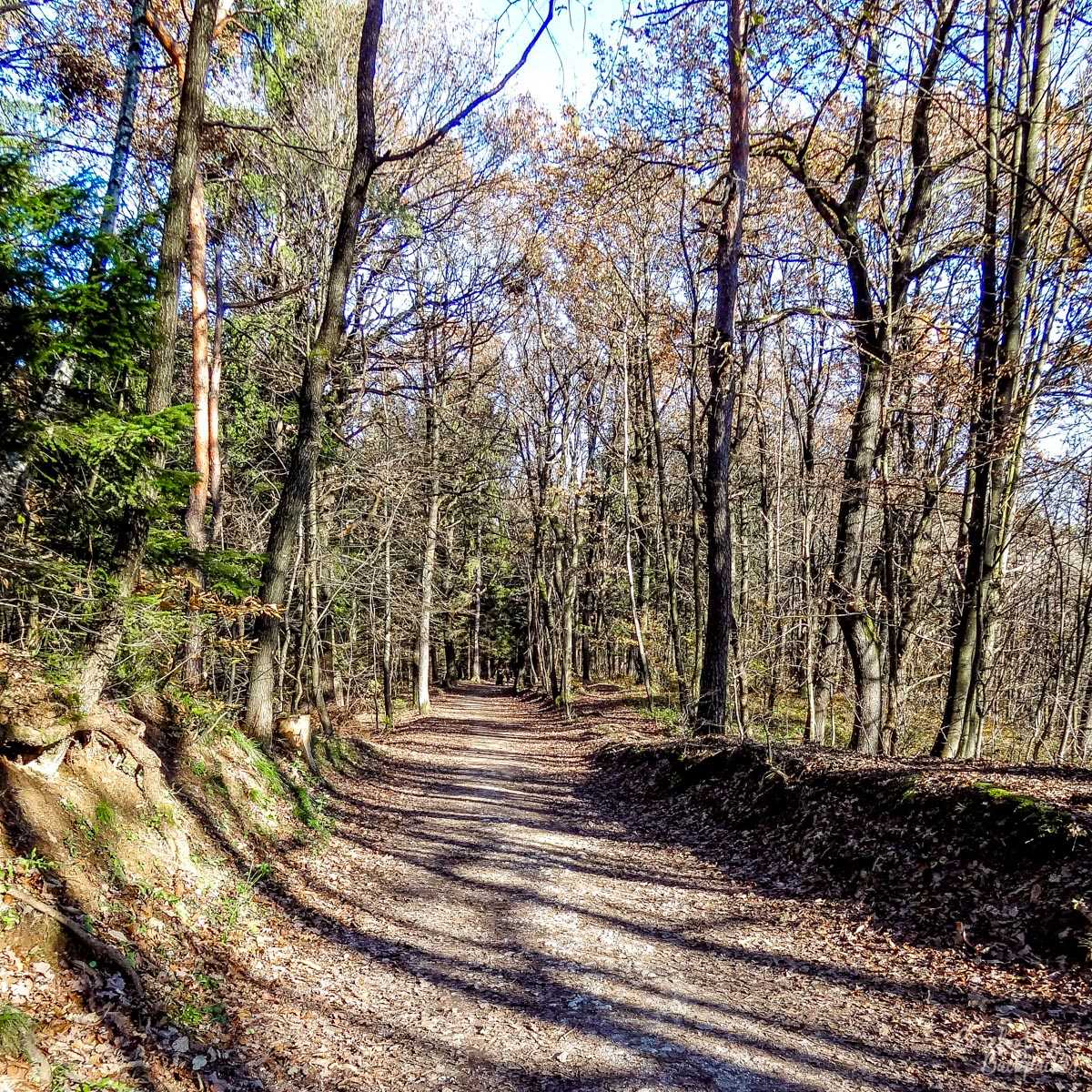 One of the forest paths in Tivoli Park, Ljubljana

Slovenian food seemed to be quite ‘Germanic’ – in a cheesy restaurant called Sokol I had a mushroom soup contained within a bowl made of thick bread, followed by ‘Kranjska’ sausage with sauerkraut, which were both apparently Slovenian dishes. By ‘cheesy’ I mean that the people serving were dressed in what I presume to be Slovenian costume, but the frills and the shirt and the waistcoat just made them look, well, Germanic. 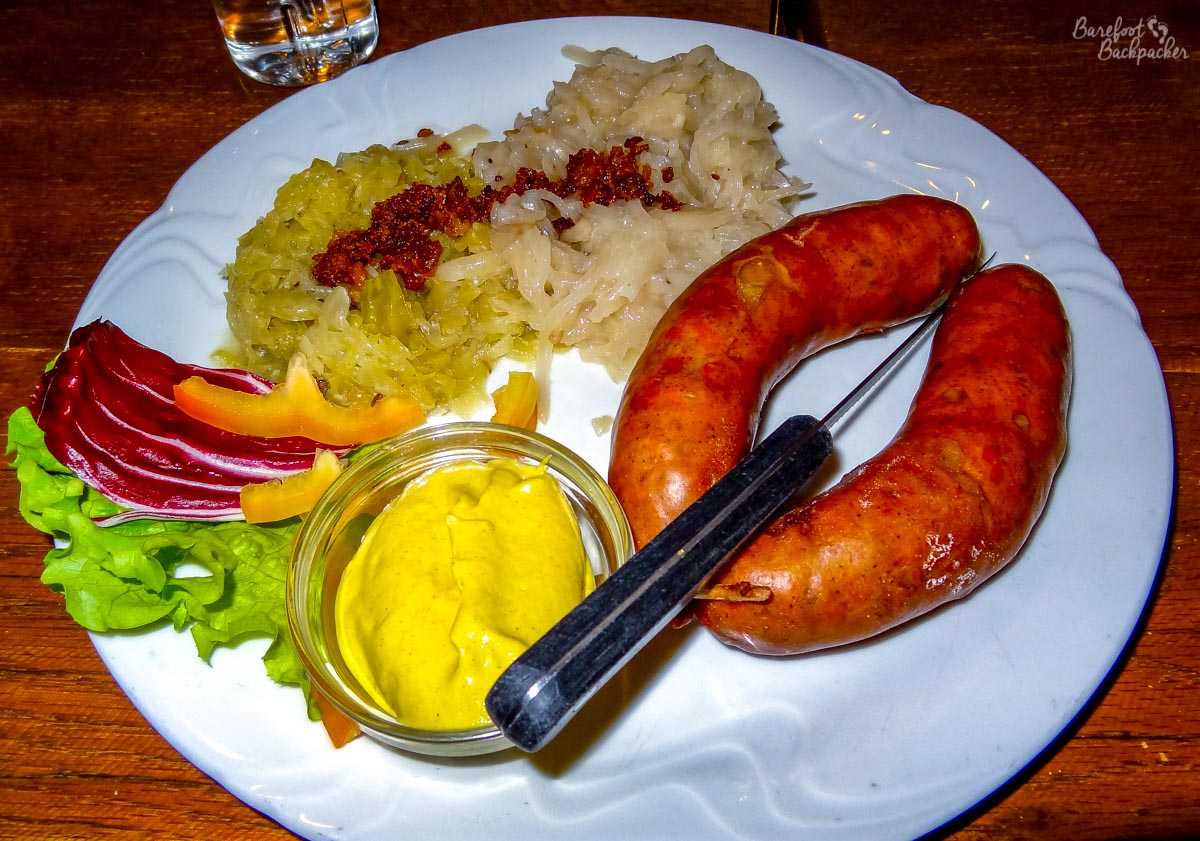 The ‘Kranjska Sausage’ at Sokol restaurant. See what I mean?

They’re also quite fond of beer – I’m sure the scene has improved even more since my visit but I visited a decent bar overlooking the Castle called Bikofe (‘Buy Coffee’, see?!), which was definitely proto-hipster; a Bob Dylan poster in the window, some early 20-something poet-looking types outside it smoking, and the chap who served me looked about 23 and had one of those ‘artistic’ beards. By now they’re probably serving overpriced local beer in watering cans and playing music on vinyl…