Papa Westray, also known as Papay, is one of the smaller islands in the Orkney archipelago. It’s around 7km north-south and at no point wider than 2km east-west. There’s pretty much only three roads, one going to the ferry terminal, one serving the heart of the settlement, and the main north-south route that connects the two with the airfield. There is, however, a surprising amount to see, and it certainly deserves more than the evening adventure / overnight stop I was originally planning to give it. The map even says it has a golf course, although I walked past the site of it three times (it’s on the road to the ferry jetty) and, readers, it does not have a golf course. 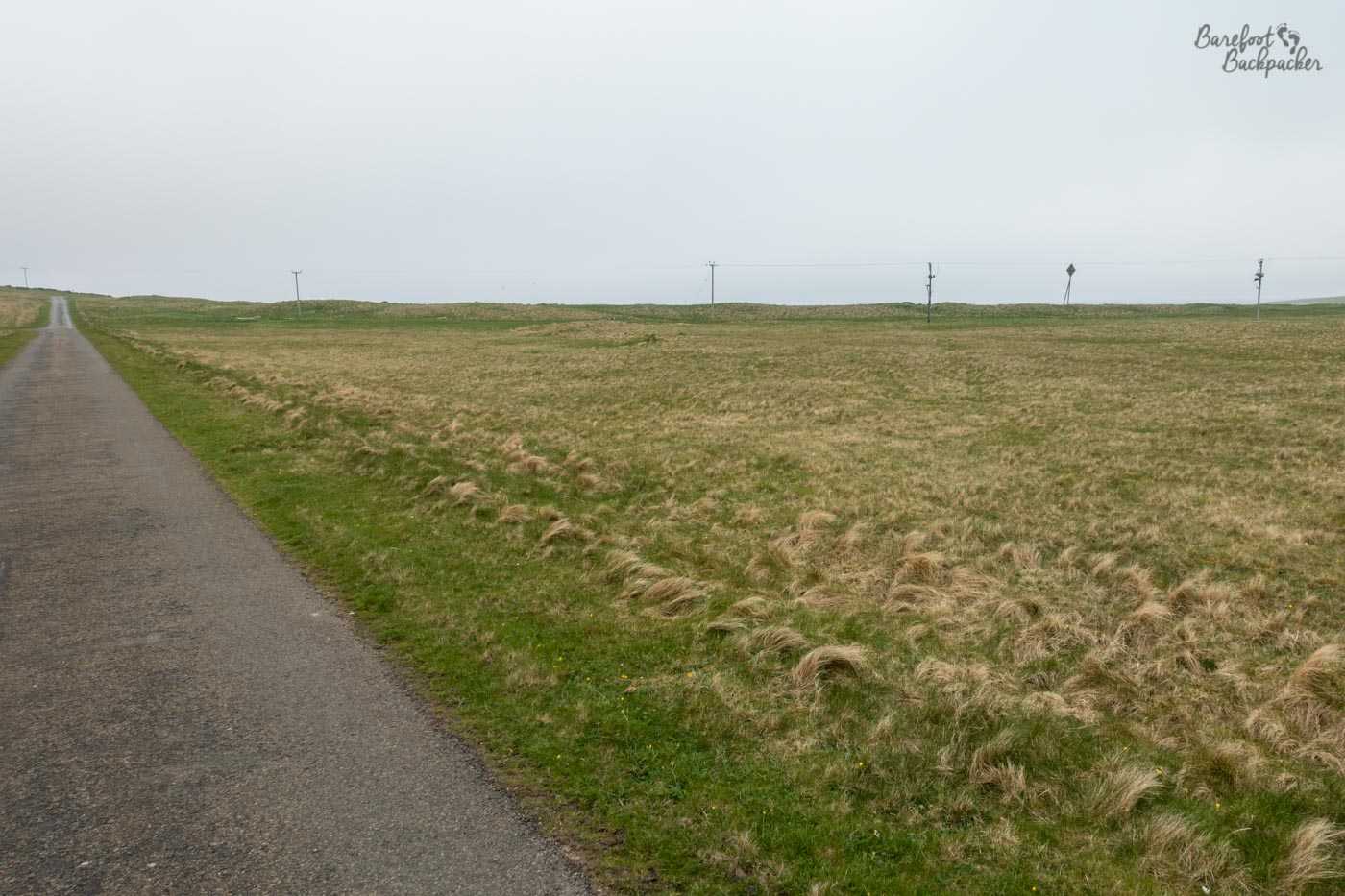 “This is clearly not a golf course.

The name is assumed to be Norse in origin. ‘Westray’, the name of the neighbouring island, means, er, ‘West Island’, which fits as it’s on the west side of the archipelago – while not geographically the most westerly island, certainly the only thing west of it is open sea (the others are a bit further south). The prefix ‘Papa’ is believed to refer to a settlement of monks there – many islands around the British Isles in general were noted for religious communities or even hermitages (eg Iona in the Inner Hebrides, and of course Lindisfarne / Holy Island off the coast of Northumberland), and more specifically there’s a couple of other islands, both in Orkney and in neighbouring archipelagos, that have Papa or a related word in their name.

There’s a little evidence remaining of this. In the south of the island, a short trek through fields off a farm road that runs along the east coast, are the remains of St Tredwell’s Chapel. While now little more than a ruinous foundation of stones on a mound by a lake, and indeed some of the stones belonged to a neolithic broch on the same site, the setting is quite lovely and quiet. The church dates from the late mediaeval period – coins dating to the late 1600s have been found there – but St Tredwell (or Triduana) herself is a much earlier myth. The story goes that she was a virgin with beautiful eyes. A local Pictish king is said to have craved her because of them, so she gouged them out and offered them to him on a stick. As you do. The tale meant the chapel, and indeed the surrounding waters, became a minor pilgrimage site for those with eye afflictions seeing cures. The lake itself is peaceful and a good place to spot wildlife, including birds and occasionally otters. 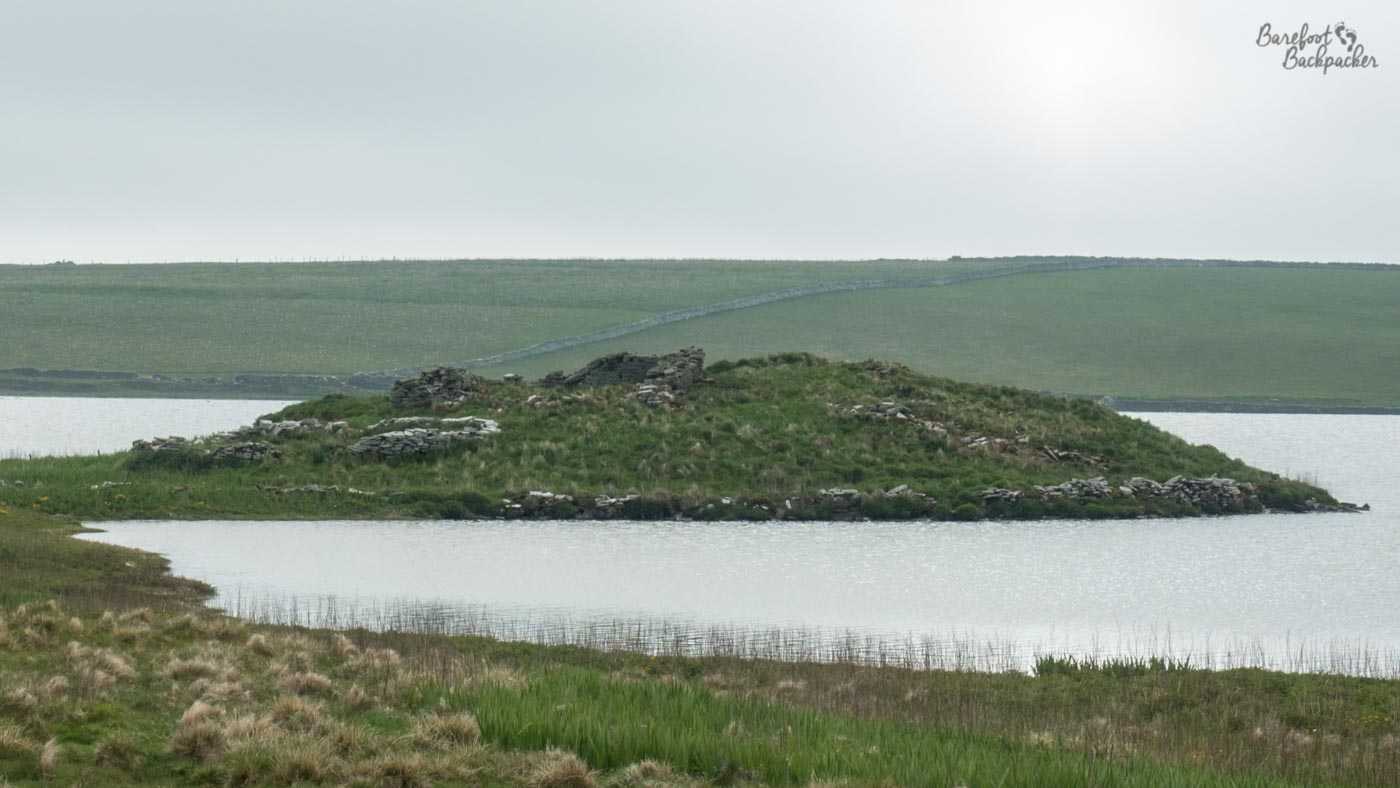 The site of St Tredwell’s Chapel.

A much more complete church stands on the west coast, round halfway up, kind of behind the airfield and looking out towards Westray. This is the church of St Boniface, which dates from about the 12th Century and has been recently restored; indeed it’s still used for services occasionally. While at first glance it seems to have been an oddly remote place to build a church, it would have been clearly visible from passing ships and it stands on what’s believed to have been a defined route for monks and other religious types heading towards Shetland. In addition, remains have been found from earlier Pictish days, including a couple of defined stones, suggesting that this site had been important for a couple of thousand years. 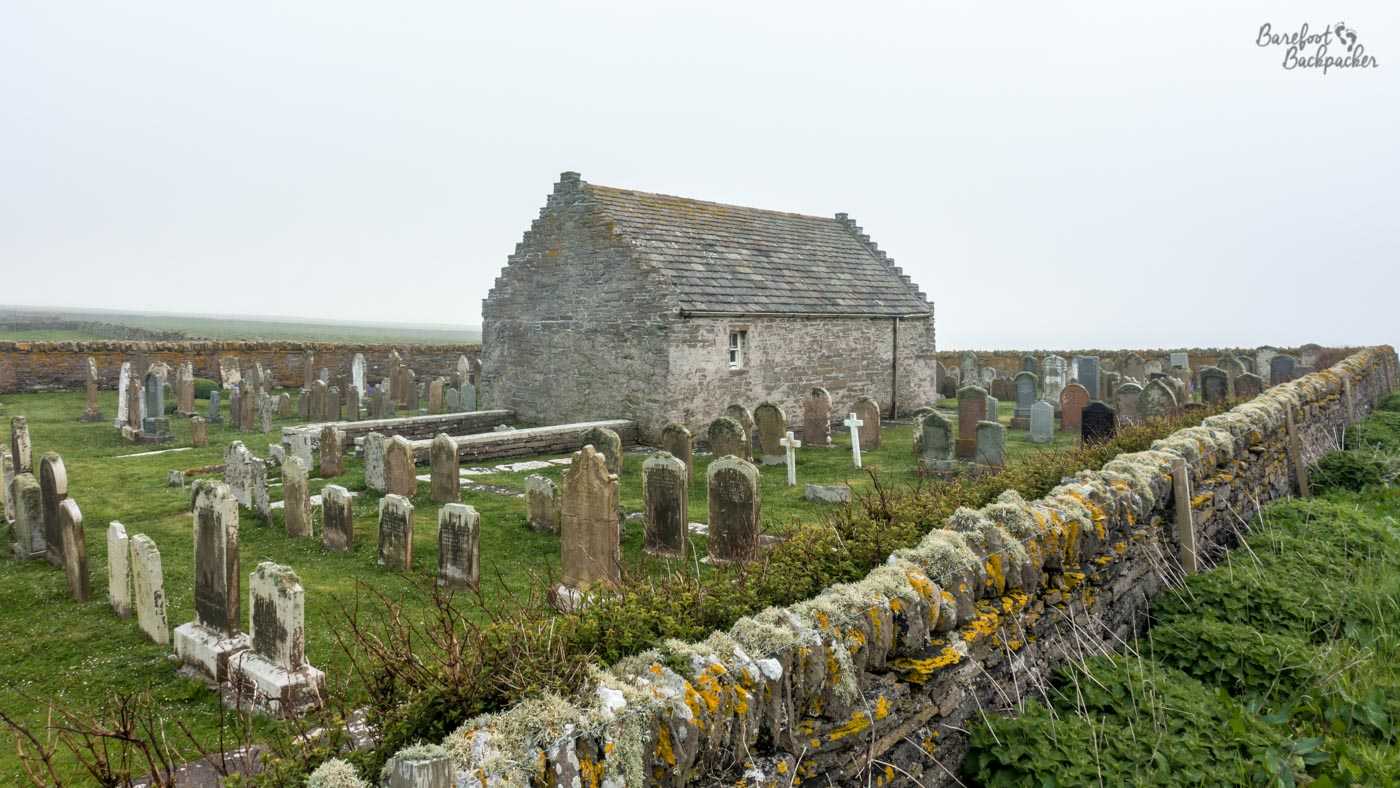 The church and graveyard of St Boniface.

Also, while quite some distance away from the village now, the site of St Boniface church seems to have been the centre of a small … I’m not going to say ‘settlement’ but certainly there’s evidence of settled life here going back millennia even prior to the church. Indeed a short walk south from the church along the cliffs brings you to the Knap of Howar. This is a sunken house, very similar to those seen at Skara Brae but several centuries older – indeed at the time of podding the Wikipedia article on “List of oldest known surviving buildings” has the Knap of Howar as the seventh oldest surviving building in the world, dating from around 3700 BC. You couldn’t realistically live in it now – for one thing it doesn’t have a roof – but it’s still preserved enough for you to clearly be able to see how it would have looked when it was habited. As it’s sunken into the land, the walls are stable and clearly visible. 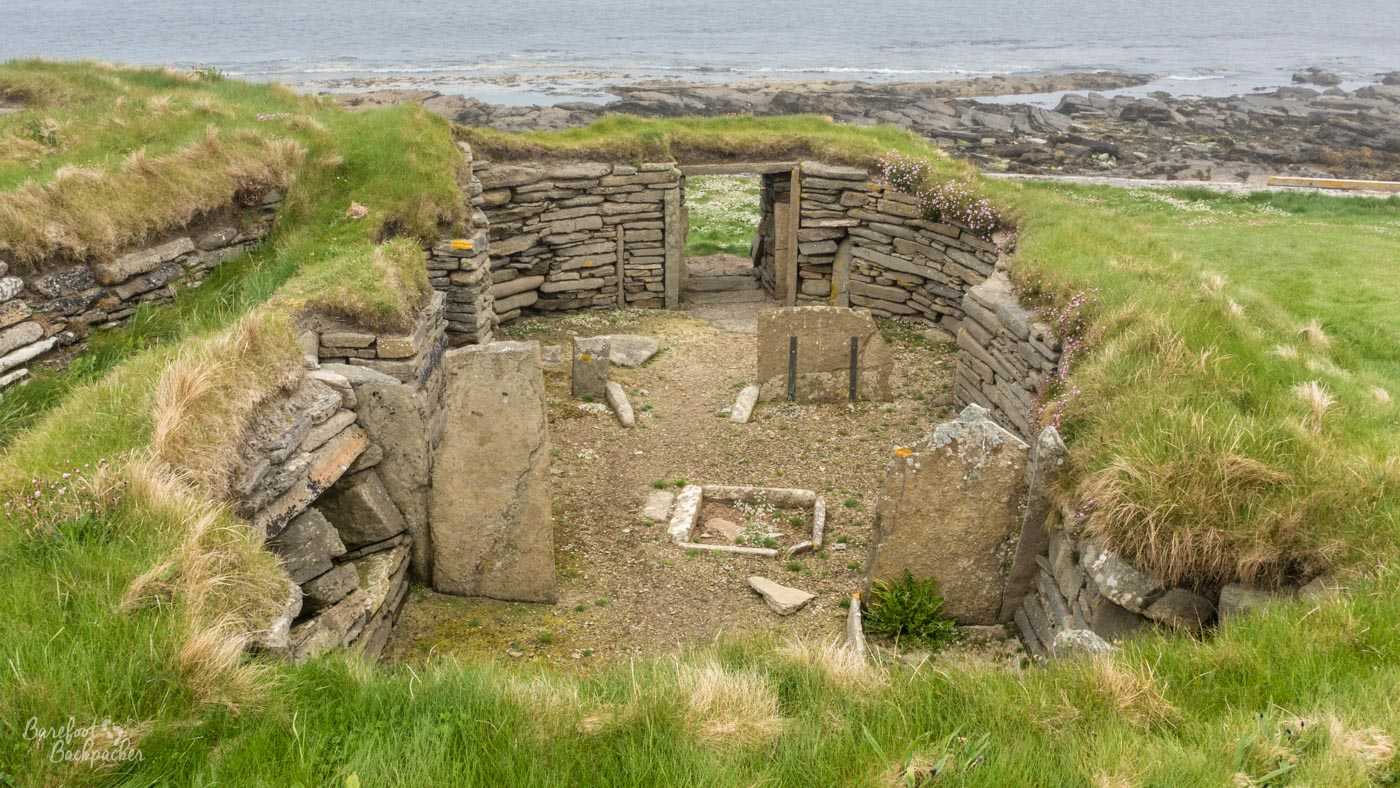 The Knap of Howar, from the back and above.

There are in fact two buildings here, separate but linked; one was certainly the house, the other may have been a neighbouring house room, or it may have been a workshop. Presumably, just as at Skara Brea, there would have been other, similar, buildings nearby that may have been lost to the sea, although it’s believed the Knap of Howar would have originally been a little way inland. The site itself is vaguely signposted from the main road, down a farm track and over a field, with just a small info board telling you all about it. Also, unlike at Skara Brae, you can wander inside the houses and get a feel for how they would have felt for the people who genuinely did live there – though at 1m90 tall I’d probably get annoyed at the incredibly low lintel above the front door. It’s fenced off from the rest of the farmer’s field in a small grassed area, so for those of you with a penchant for really getting hands-on with history, perfect to wild camp next to. I’m not sure of the legal implications of wild camping at a scheduled ancient monument, but I guess as long as you don’t damage the site, you’ll be fine. Although I could have done, I did not do this. 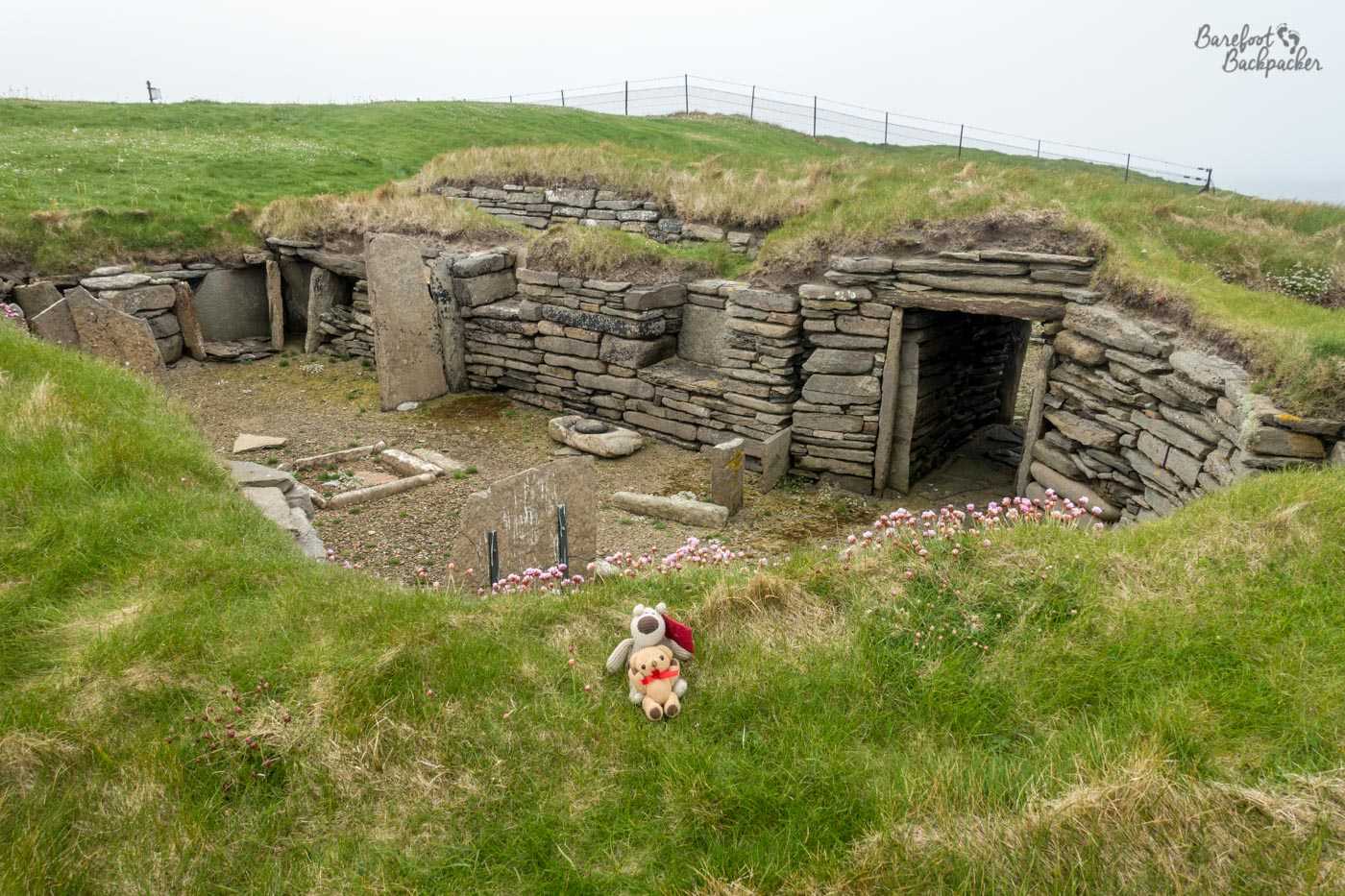 Baby Ian and Dave pretending to be Neolithic.

Instead, I was staying what amounts to Papa Westray’s ‘hub’, Beltane. Though it calls itself a hostel, it serves additionally as the island’s shop, cafe, pub, entertainment centre, and information booth. On the Saturday (the day I should have left) there was a coffee-and-cake gathering in the middle of the day (and the cakes were lovely, may I add), and then in the evening they opened the bar and had live music on. No singing, because of Covid regulations, but it felt rather strange after so long to even be indoors, drinking, listening to music, with lots of other people. And the place was crowded. There’s only about 90 people who live on the island, and even though a couple of other people there were ‘tourists’ like me, I’d say a good percentage of the residents were in that room that night. There was even, oddly, a film crew from the French TV channel France Cinq, who were apparently doing a documentary about a local pilot. 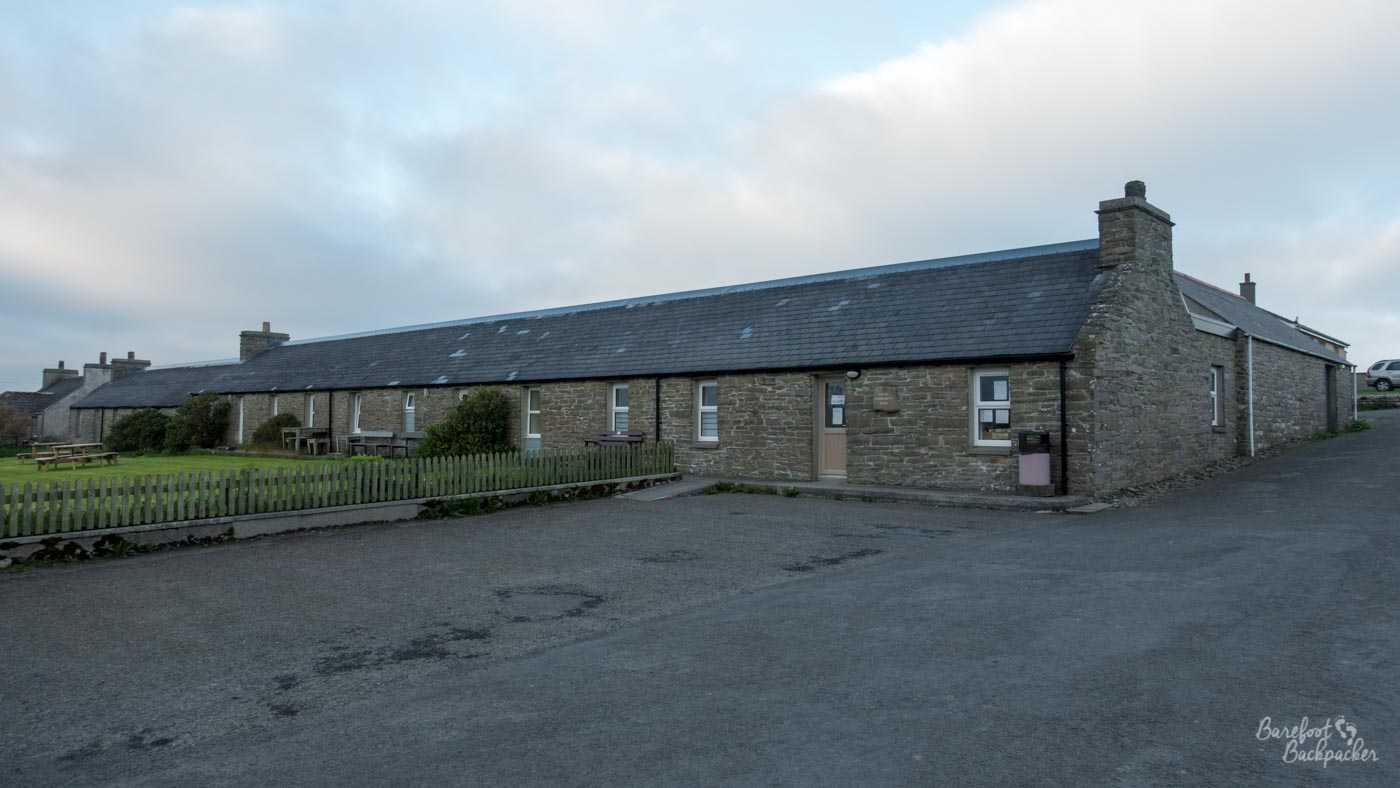 The back of the Beltane building on Papa Westray – this is the shop.

I stayed three nights at Beltane; my original intention had been to only spend one. I’d spent two days hiking around the neighbouring island of Westray and I was absolutely knackered by the time I arrived on Papa Westray, so made the decision to spend the Saturday night there too. Then the weather closed in and the island pretty much got cut off on the Sunday because of fog. The weird thing for me though is that I never at any point felt ‘trapped’ on the island – indeed it probably did me good to stay there rather than to be continually travelling. 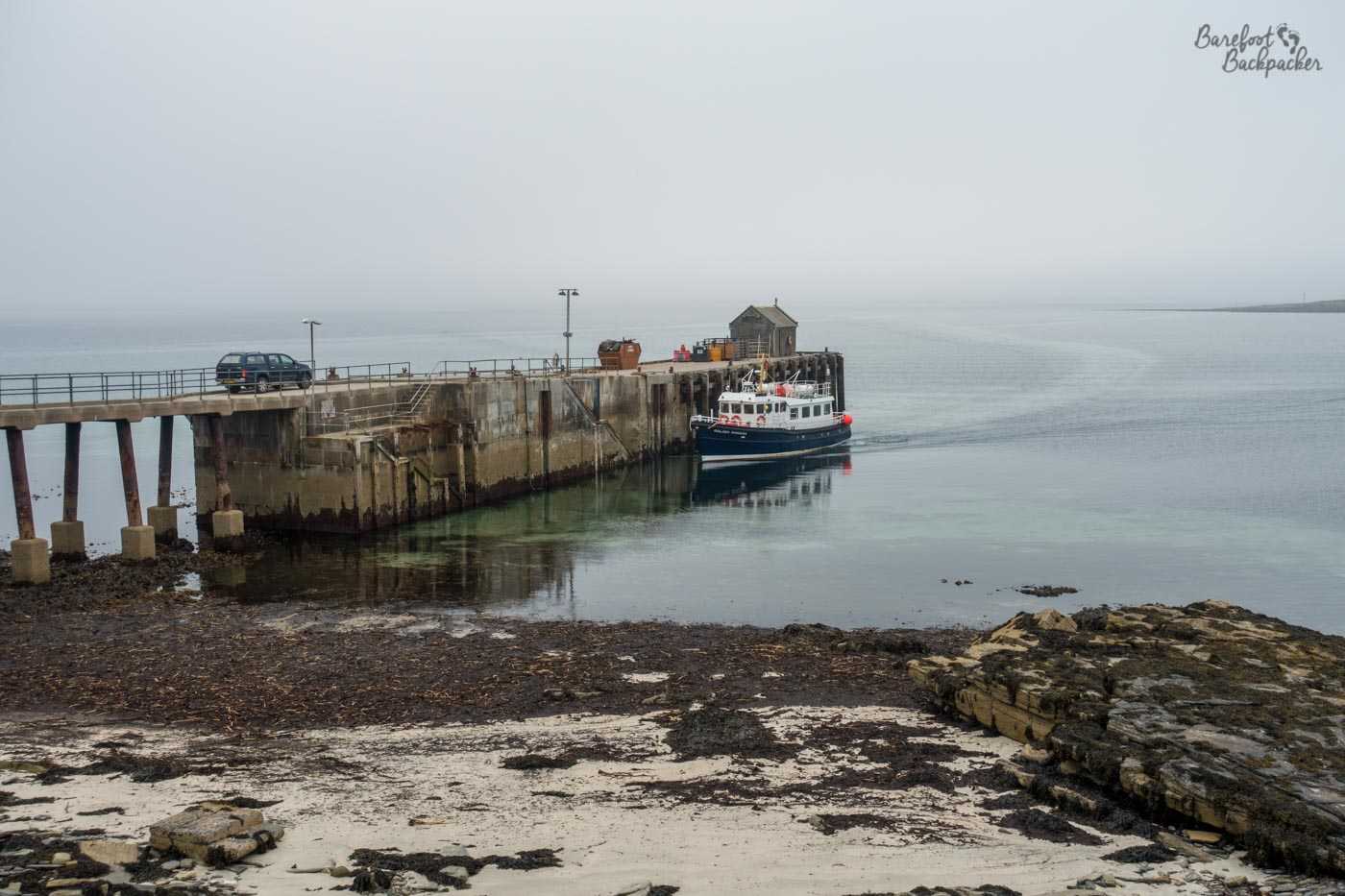 The quayside for the ferry to Westray.

Beltane stands pretty much in the centre of the island, just to the east of the main crossroads. There’s a couple of museums nearby (both closed on my visit because, well, you know), one dedicated to the kelp industry which was one of the biggest industries on the island in the past, and the other (John o’ Holland’s Museum) is a small general museum about farming and island life, but most of the buildings here are houses and farms. It only takes a handful of minutes to wander down the roads and find yourself in the countryside or by the sea. 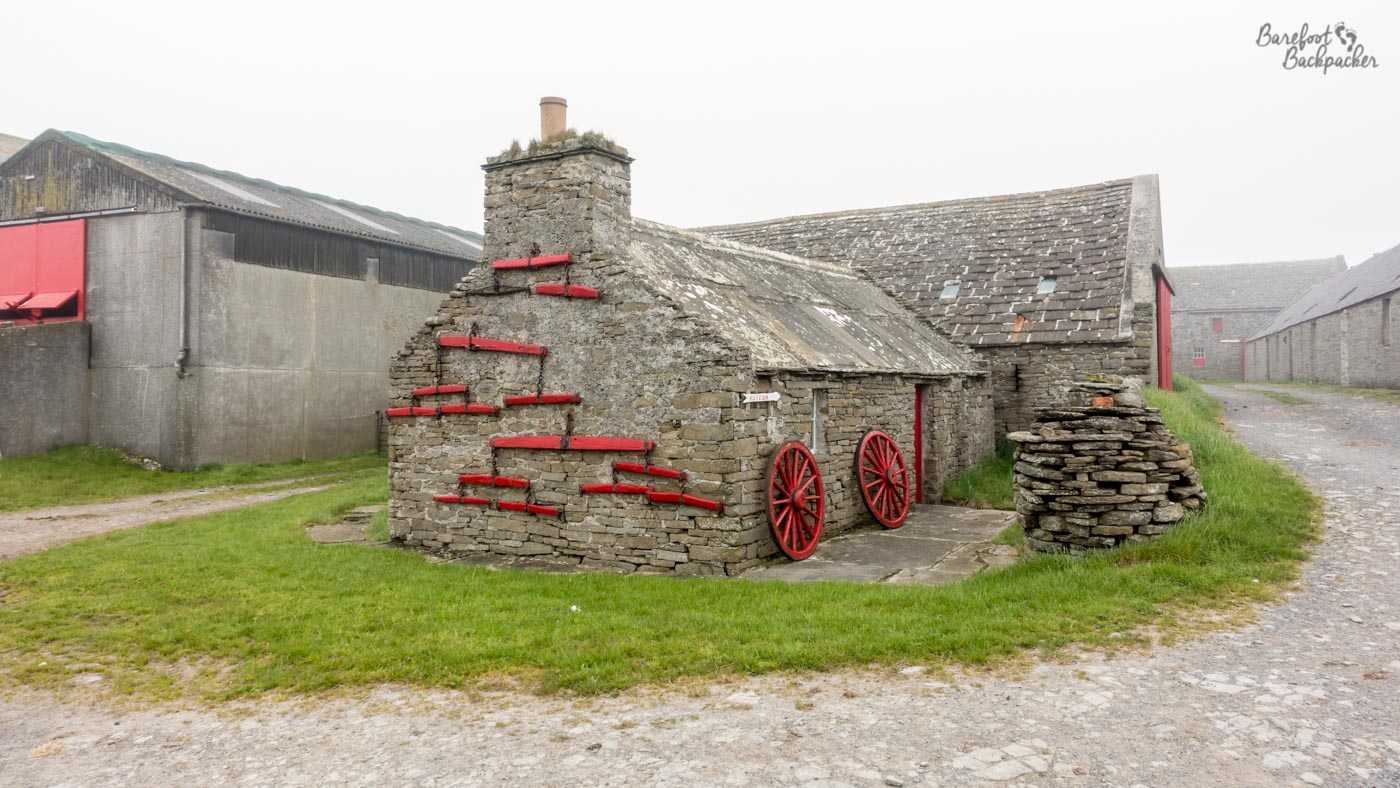 Farm cottages in the centre of Papa Westray; one of these is the John O’Holland Museum.

Unsurprisingly, one of the main draws these days to Papa Westray though is the wildlife. At the northern end of the island is a large hill, called, impressively, North Hill, and it’s around 50m in height, so not that large a hill really but given it descends to the sea on three sides by sheer cliffs, it certainly feels quite high. On top of the hill is a hut designed so you can sit and watch the birds fly by, including skua and oystercatcher. Except on my visit, it was so foggy that I doubt you’d’ve been able to see a pterodactyl at 5 metres. Not that I’d have been able to recognise one even if I had, because you know my bird-watching skills and knowledge are roughly equal to that of a blind badger. In a bag. Dead. 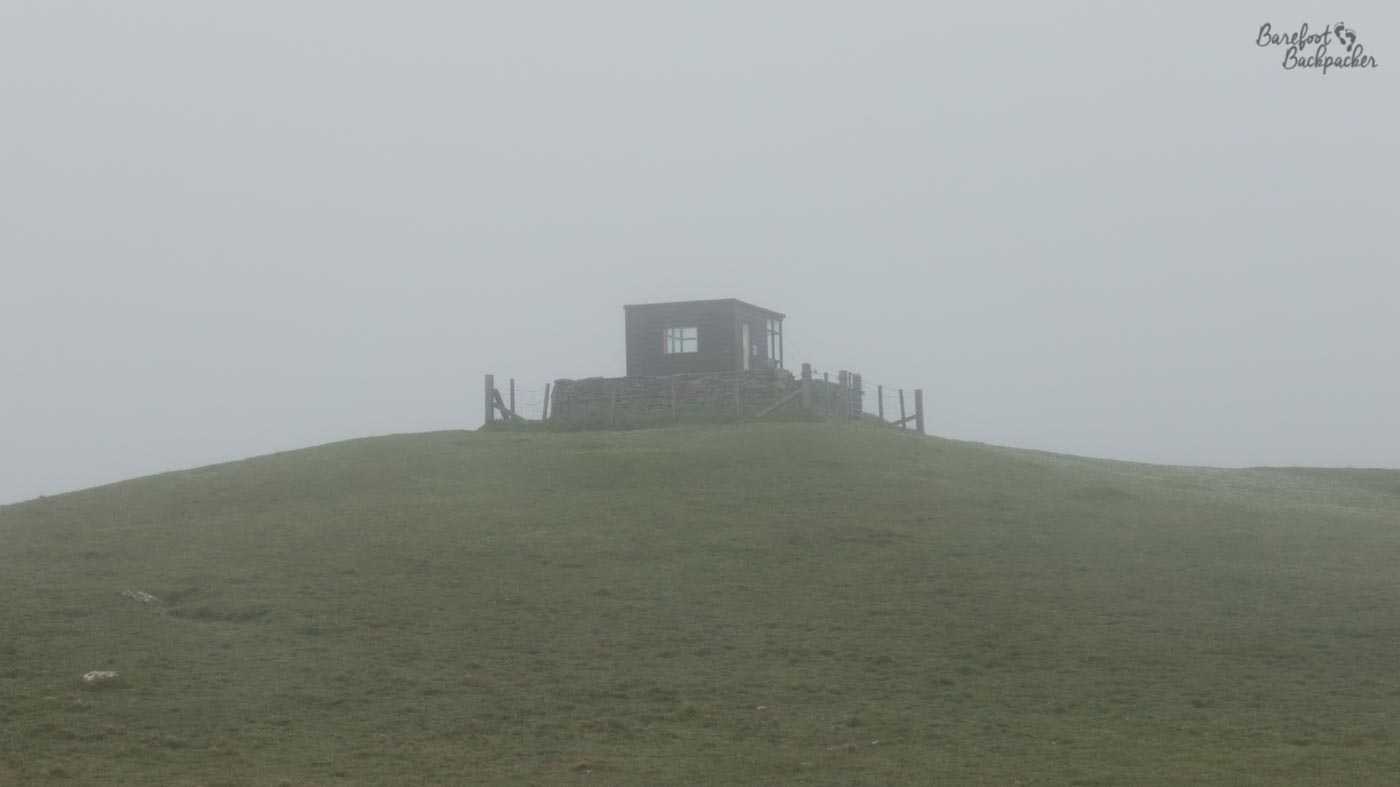 The bid-watching hut atop North Hill, surrounded by fog.

There’s a footpath that goes along the cliffs at the base of the hill to the north though that provides good viewing out to sea, and is the site of a small statue of a Great Auk, one of the most famous extinct bird species. Because we killed and ate them all. But this island would have been one of their better breeding grounds. 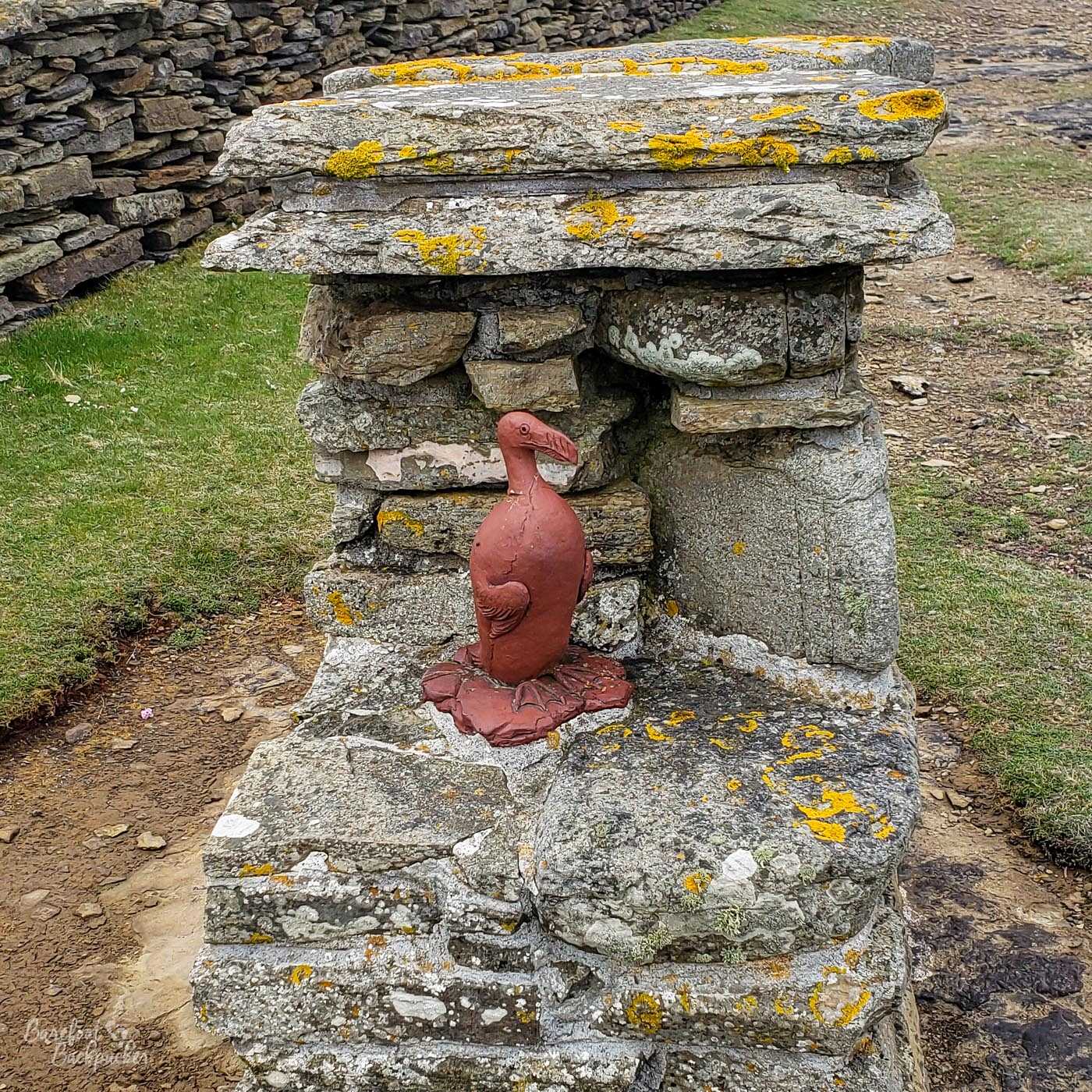 Statue of a Great Auk. It’s smaller than I expected.

Regarding flora, the cliffs around Orkney, and especially here on Papa Westray, are one of the only locations in the world where the Scottish Primrose grows. This small flower has purple-blue petals, which bloom twice a year, in early-mid May, and July. Guess whose visit was in late May/early June and therefore missed them …

In summary, although small, there’s definitely enough to keep you on Papa Westray for a couple of days longer than you anticipate – its size on a map belies its interesting features.