London Islington. I don’t know what image the phrase brings up, but in my head it’s a confused sort of place, where suburban ‘yummy mummies’ with designer prams and book deals for female contemporary romantic fiction clash headlong with rough inner city council estates made up of endless concrete blocks three floors high of flats, the kind regularly seen in gritty TV crime dramas. 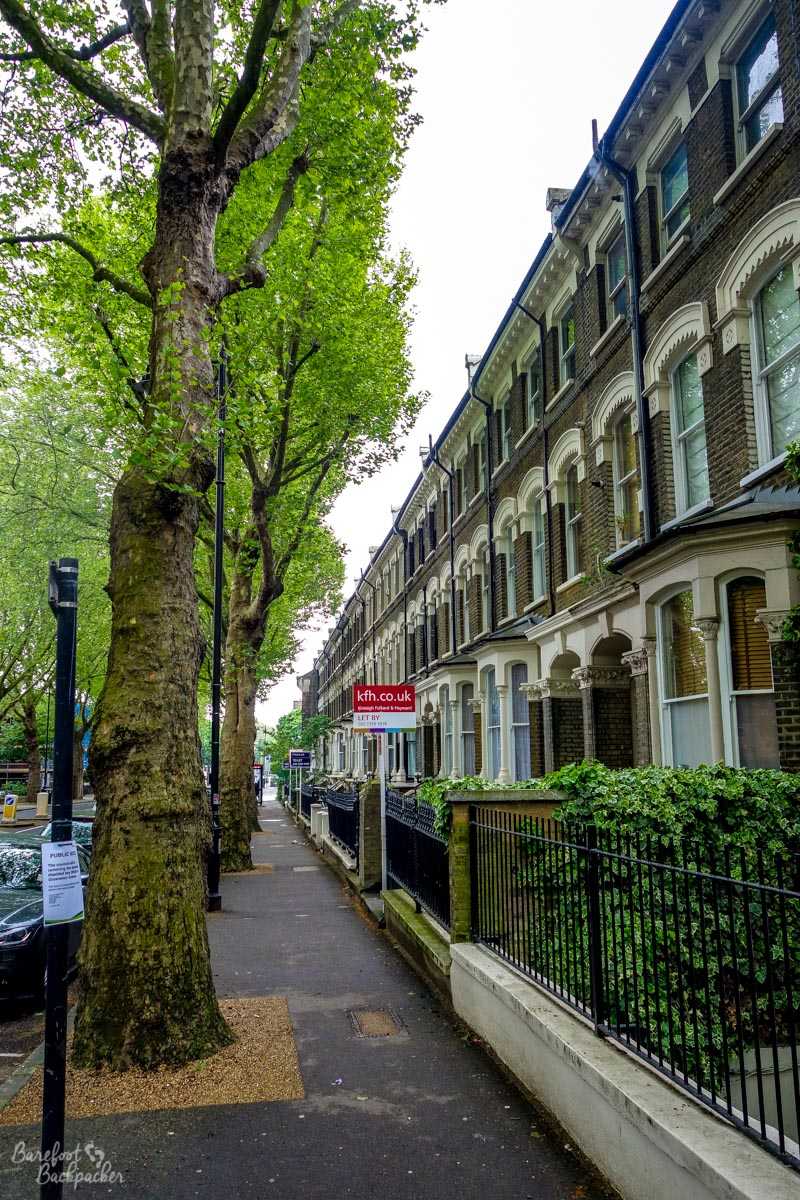 A typical street in this part of North London – large terraced mansions and tree-lined streets. In the distance, by the way, is a for-sale sign from the famous estate agents of ‘Hotblack Desiatio’. Ridiculous name; sounds more like a sci-fi villan …

But I’d never been there, at least I thought I never had – it turns out that London St Pancras railway station is in it (the boundaries between Islington & Camden have never been entirely clear in my head). 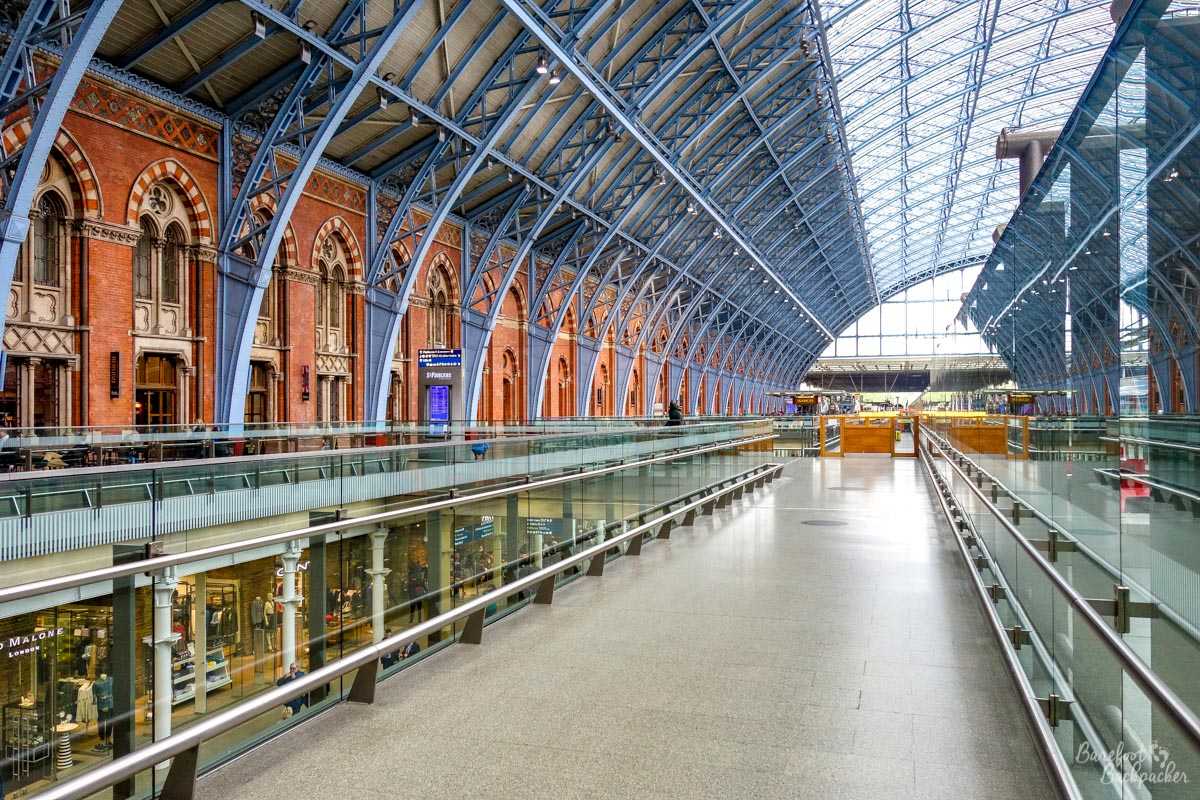 The upper floor of St Pancras Station, roof in evidence.

It’s a grand building, a wonderful example of Victorian architecture, designed to specific measurements at the request of the Midland Railway so that barrels of beer could be rolled through the concourse with the minimum of fuss – several of the main shareholders were the breweries in Burton and they wanted access to London markets. The roof of the station is a vast single arch (the biggest of its kind when built) that was destined to be pulled down when the station was listed for closure in the 1960s, but it was saved through the passion of people like Sir John Betjeman, Poet Laureate, whose statue now stands on the upper concourse. History proved him right; not only has the station been preserved, it has thrived and is now the terminus for international trains from Europe. 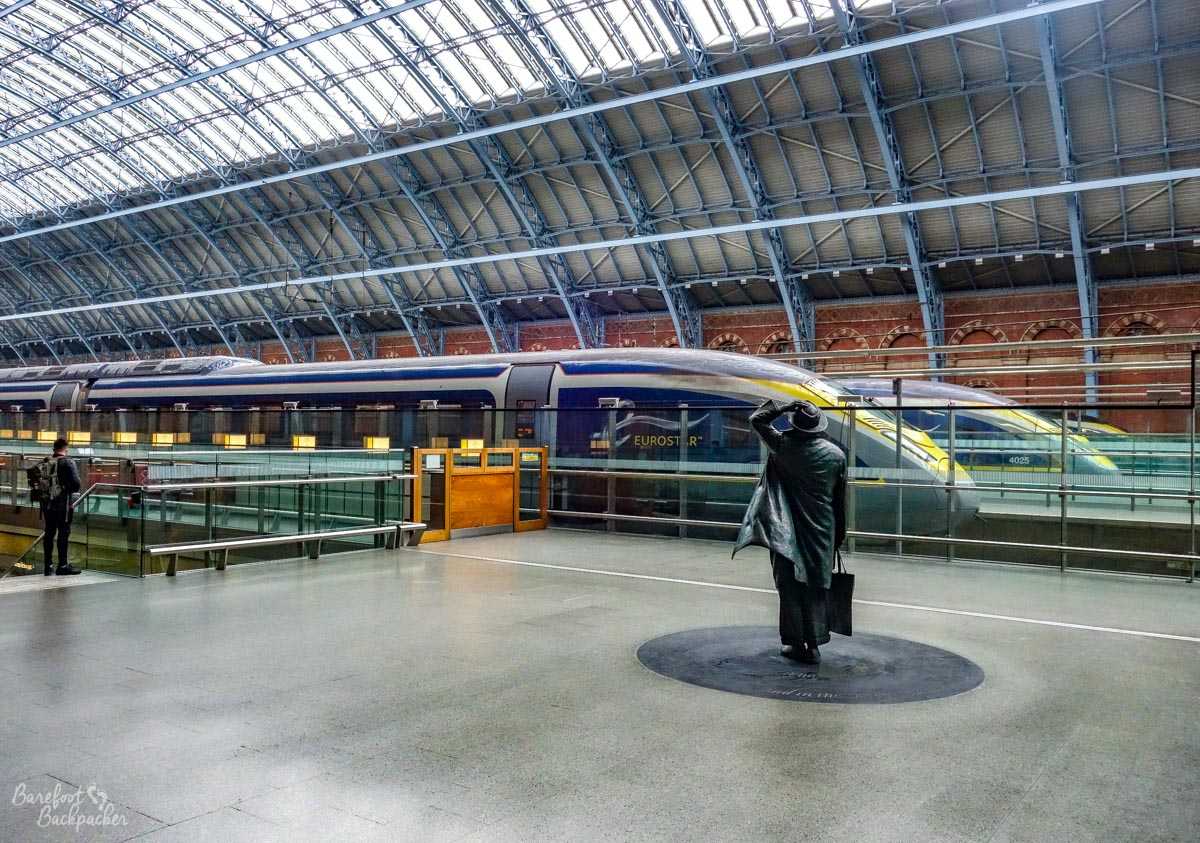 Betjeman’s love of historic architecture in general (he’d previously failed in an attempt to have the nearby Euston Arch preserved) is well known, and is but one example of love that can be seen in these parts of Inner North London – even if it sometimes seems like parts of the area are definitely unloved.

Standing on the side of love, and crossing the border of Islington and Hackney lies Newington Green Unitarian Church. This is the one of the oldest Unitarian churches in the whole of England that’s still in regular use, having been originally founded in 1708. 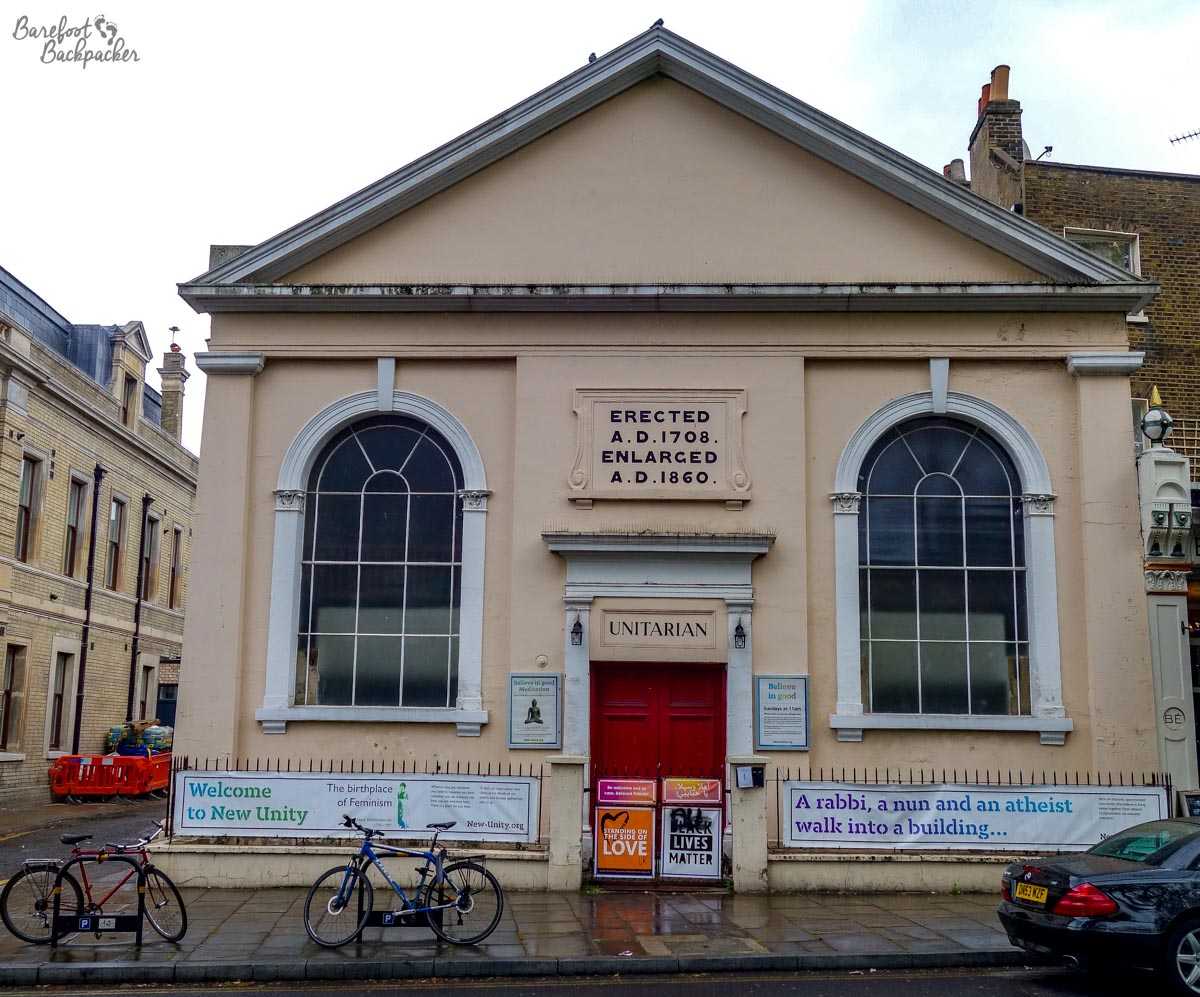 Now, (Universalist) Unitarians have long been at the radical end of Christianity (if loving your fellow human can be considered ‘radical’), and were themselves ostracised (even to the point of being executed as heretics in the middle ages) for centuries. Following a series of controversial Acts of Parliament in the 1600s, many moved to Newington Green (where their Dissenting theories were at least tolerated) and, eventually, built this church (now a listed building). 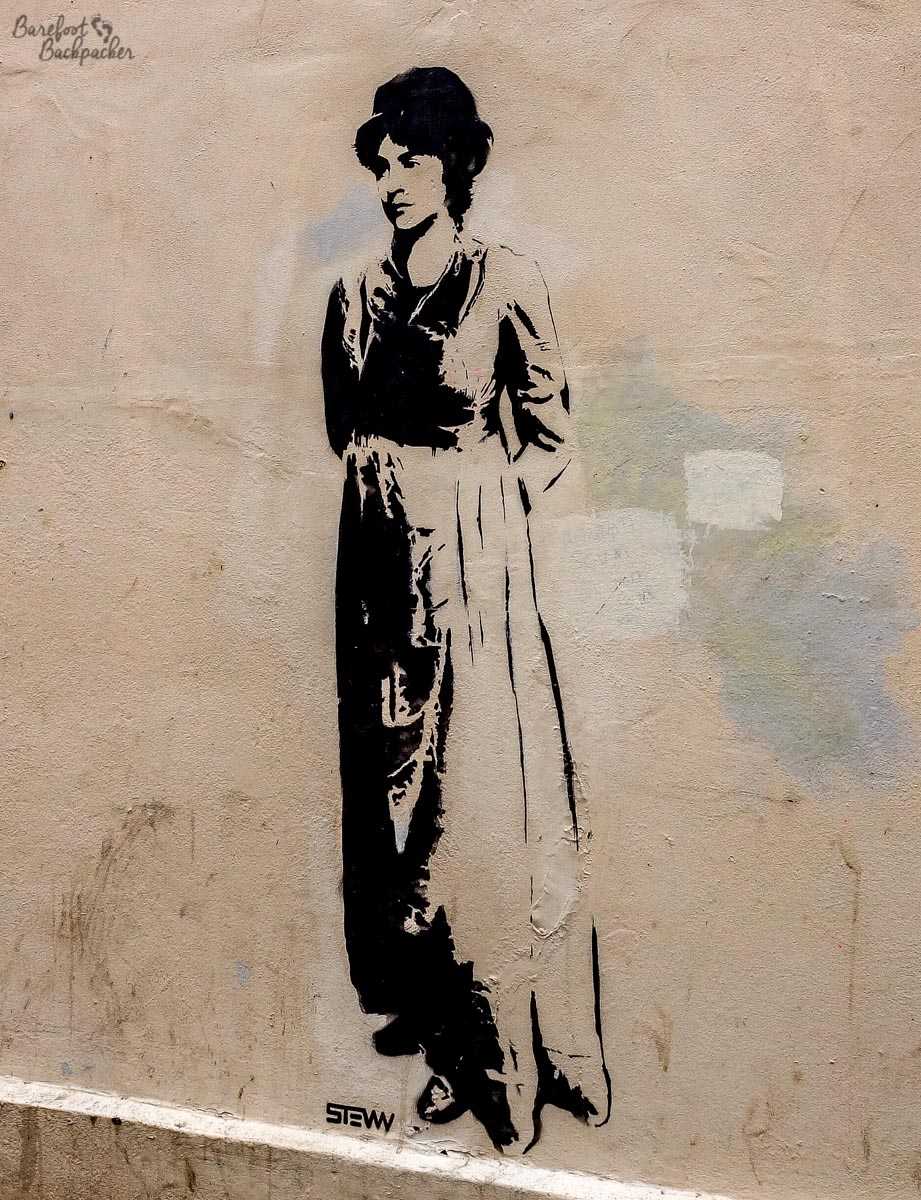 Unitarianism in general has been at the forefront of liberal movements, from abolishing slavery to anti-fascism. This particular church has been especially notable; one of its early active members was author, philosopher, and equal rights activist Mary Wollstonecraft (who one could call the ‘godmother of feminism’), and since her time the church has been at the forefront of campaigns around domestic violence and human trafficking, whilst they are also notable in the forefront for LGBT rights; in 2008 they took a stance of refusing to conduct any weddings until gay couples were legally allowed to marry. 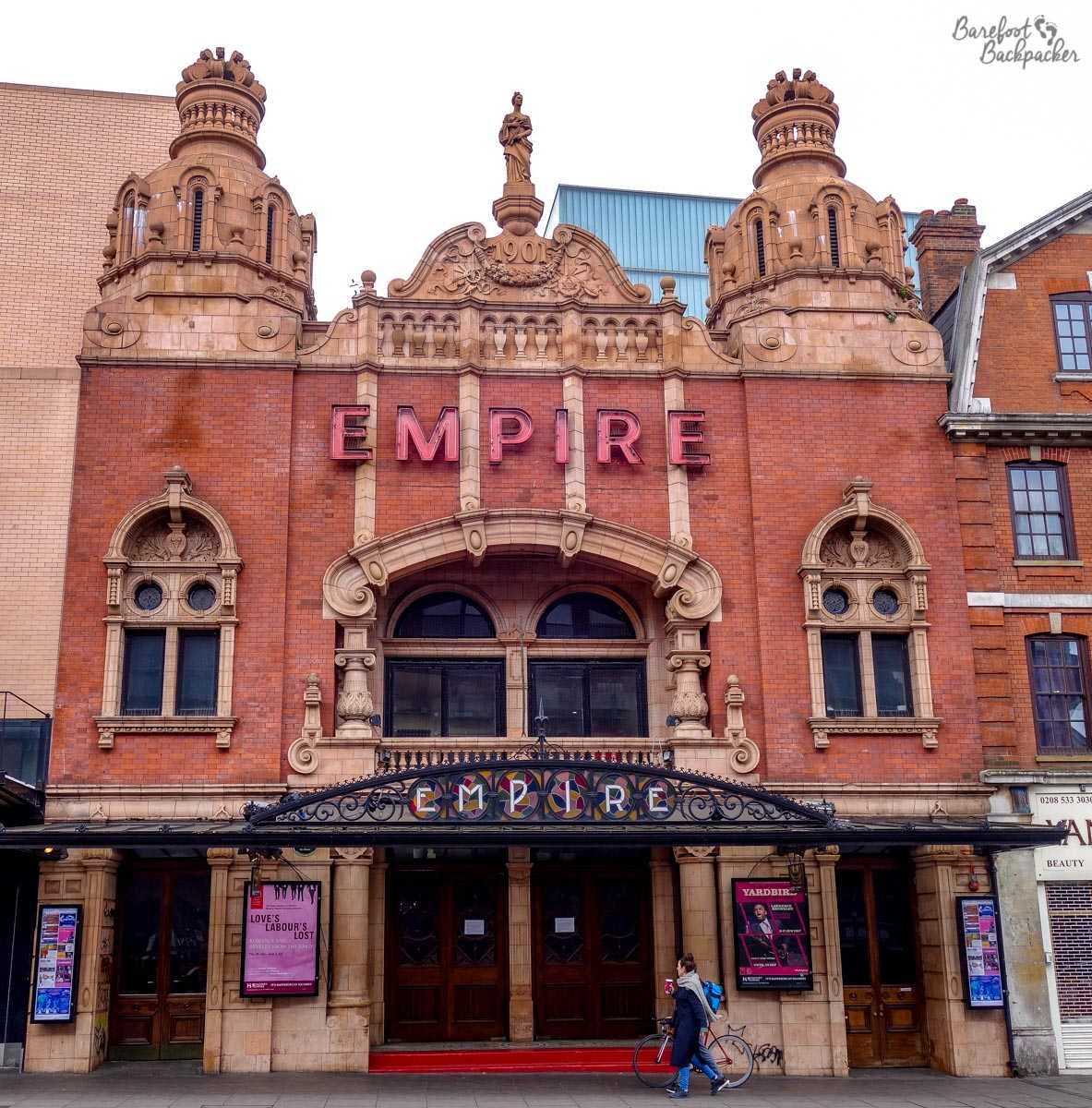 The Hackney Empire Theatre, in the suburb of Hackney Central. It’s also the name of the railway station, yes…

Hackney itself is another of those places I don’t really know; indeed I’d never been quite sure where it was, other than ‘in Inner London but not quite as far east as Brick Lane’. The only reason I’d ever heard of it really was because of the ‘Hackney Empire’ – a well-known theatre which I’d often heard of in the context of comedians performing there. The centre of Hackney (town) is a mishmash of railway lines and typical suburban streets lined with takeaways, pubs, and taxi companies – on first sight it’s not a ‘lovable’ place – however just outside the town is St John’s Church Gardens, which provide a bit of rest. 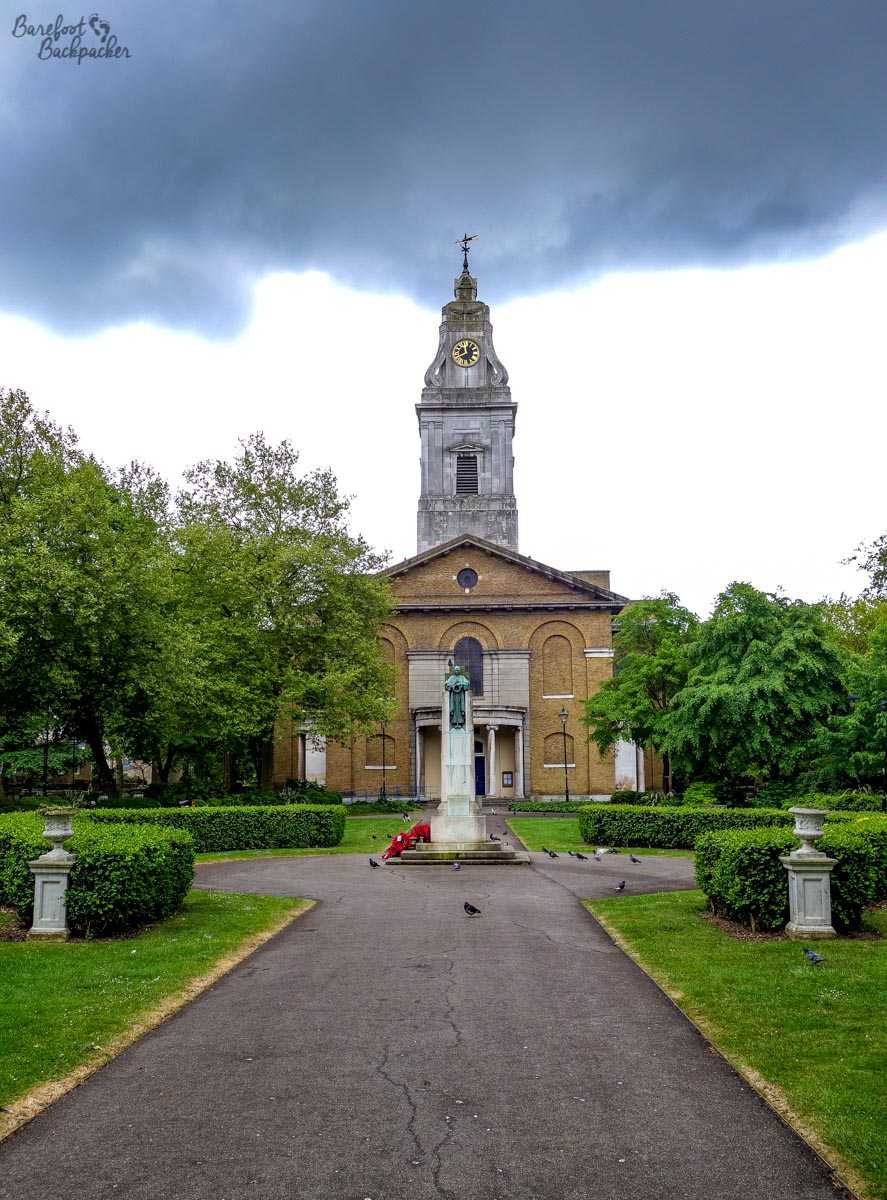 The newer church at Hackney, set in quite nice grounds.

The church itself (St John-at-Hackney) is relatively new, built in 1792 to replace a previous church close by that was deemed to be too small for the growing population. Little remains of this old church, barring the tower (St Augustine’s Tower, originally the bell tower of the old church and preserved after its demolition because the new church didn’t yet have one, which is now a Grade I listed building and is seen as the iconic landmark in Hackney, although its location – hemmed in by other buildings and surrounded by trees – make it an awfully difficult building to take a picture of), and its old churchyard, which is the final resting place of, amongst others, Francis Beaufort. Although now largely deprecated, his claim to fame is creating the wind speed scale bearing his name that defined breezes/gales/hurricanes etc, and which is still used in many press releases and, of course, Radio 4’s Shipping Forecast. The gardens around the both the church and the tower are landscaped, with a number of larger family graves, as well as a memorial to the Czech town of Lidice, razed to the ground in WW2. 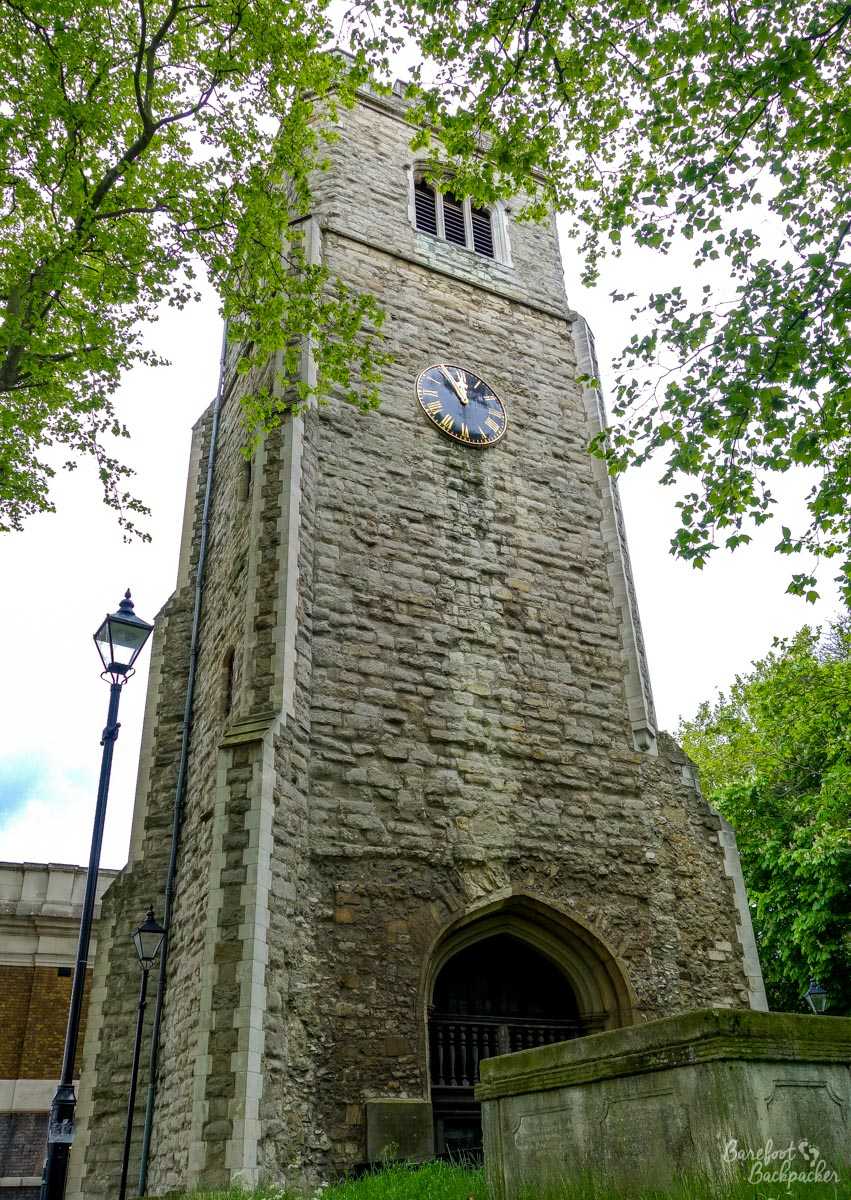 St Augustine’s Tower – all that remains of the old church. This photo required me lying flat on the floor pointing the camera upwards, much to the confusion of a passing jogger.

A little way North of Islington & Hackney lies Walthamstow, most notable for someone of my vintage for its postcode: E(ast) 17. I’d always imagined it as a lively but very working-class area; it’s famous for its old, iconic, greyhound stadium (used in publicity by not only the eponymous boyband but also indie-darlings Blur on their ‘Parklife’ Album), and to be honest it didn’t disappoint. Within 10 minutes of arriving in the town centre, I’d bought an absolutely fantastic spinach/feta bread from a Jewish bakery, browsed vibrant material at an Indian sari stall on Walthamstow market (at around a mile long, it’s one of the largest street markets in Europe), and walked passed a stereotypical ‘cockney geezer’ on his mobile phone talking about his need to be somewhere else very quickly to seal a deal. I’ve always found it hard to love London, because I’ve always found it too expensive, too crowded, and too ‘unfriendly’, but I think I could learn to love Walthamstow; it feels like a more ‘inclusive’ and genuine version of the area I grew up in. 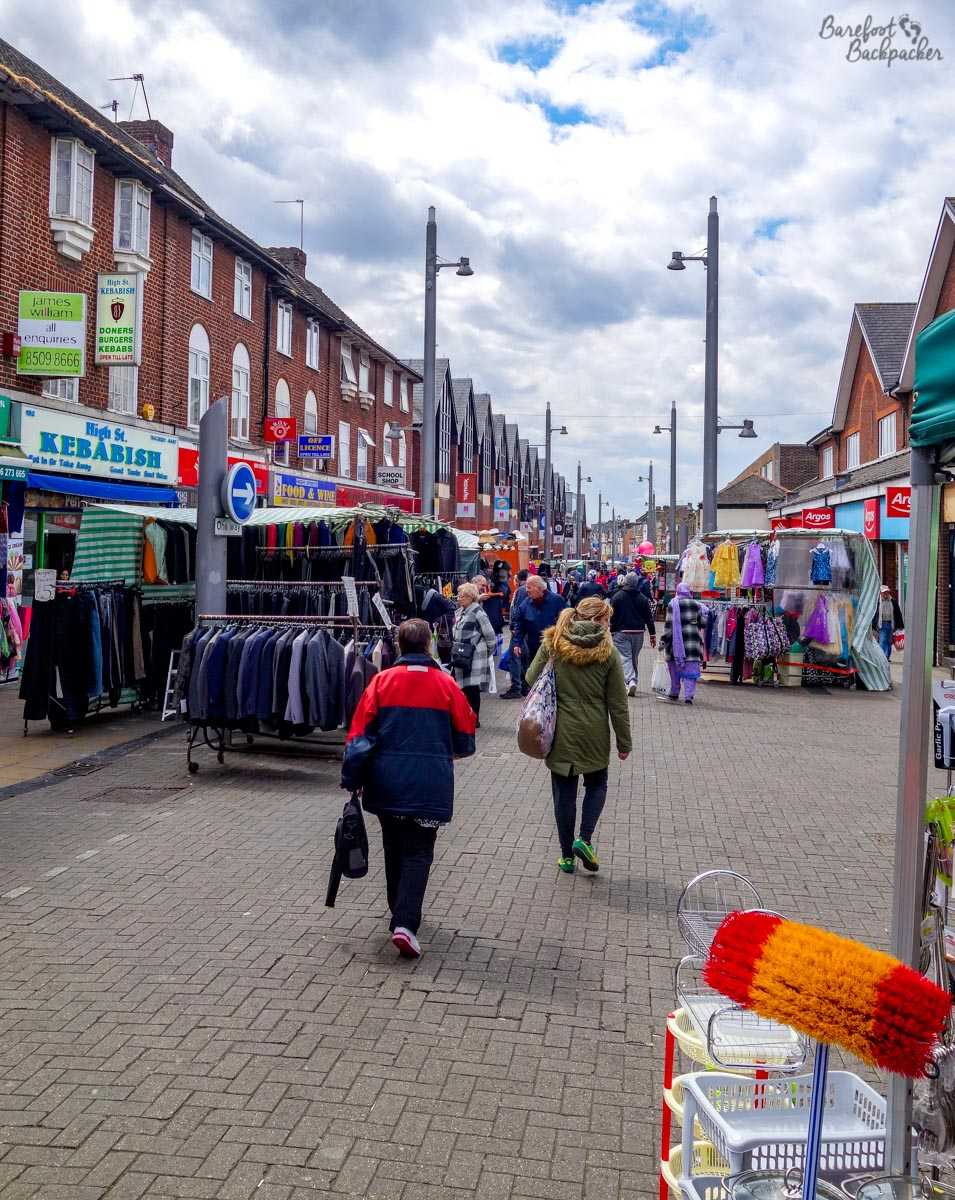 Walthamstow Market; it carries on like this for a long way. While not terribly aesthetic, it is incredibly ‘cultural’.

Pretty much all that remains of Walthamstow Stadium – the iconic, and listed, frontispiece.

North of Walthamstow is Chingford; classic sitcom suburbia. But there is love here too; the Old Church at Chingford Mount has one of the largest and most spectacular graveyards I’ve ever been to, and nothing says ‘I love and remember’ like a gravestone. 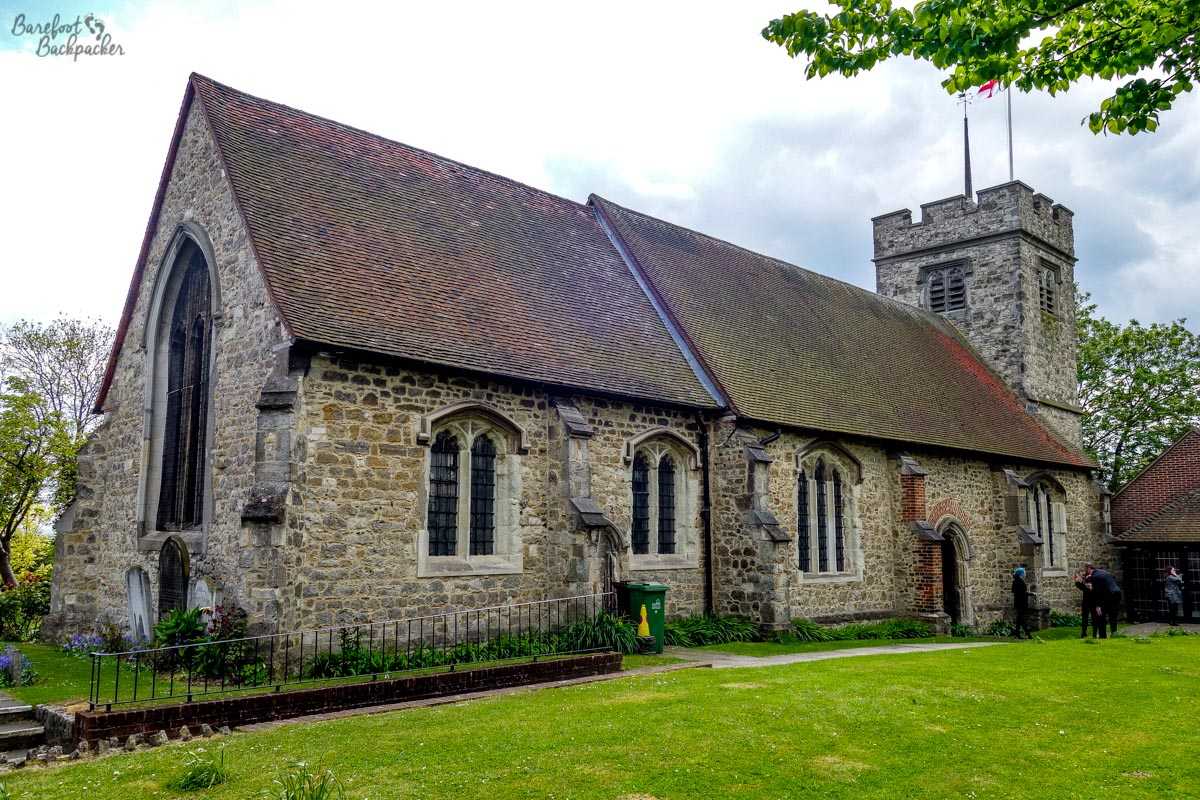 The ‘Old Church’ at Chingford – official name is ‘Chingford Mount All Saints’; there is another church in the parish but disappointingly it’s not called ‘Chingford New Church’.

See, most British churchyards are filled with row upon row of graves with similar dedications, the only difference being newer grave tend to be shiny marble rather than dull grey granite. But here … it feels more reminiscent of yards in Ukraine, in Timor-Leste, in Chile, than here in the UK. Each gravestone seems to have a personality; a unique style; and of course the surrounding décor says more about love than any dedication to the living. Some graves even have benches sat in front of them, so the ones left behind can sit and think about the loved ones they’ve lost. Maybe this is the modern way of remembrance in the UK; maybe I’m just used to going around mediaeval churchyards with inscriptions barely visible, worn down by centuries of bad weather and forgotten about by distant descendants. 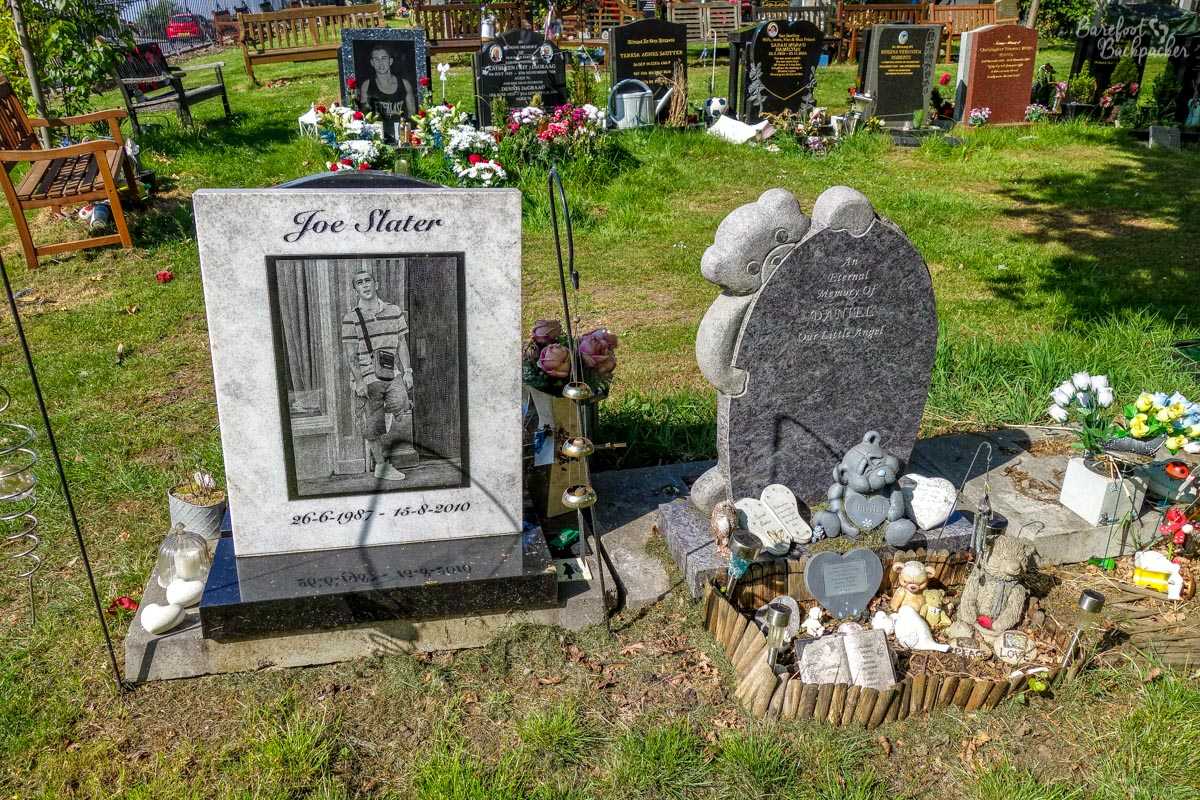 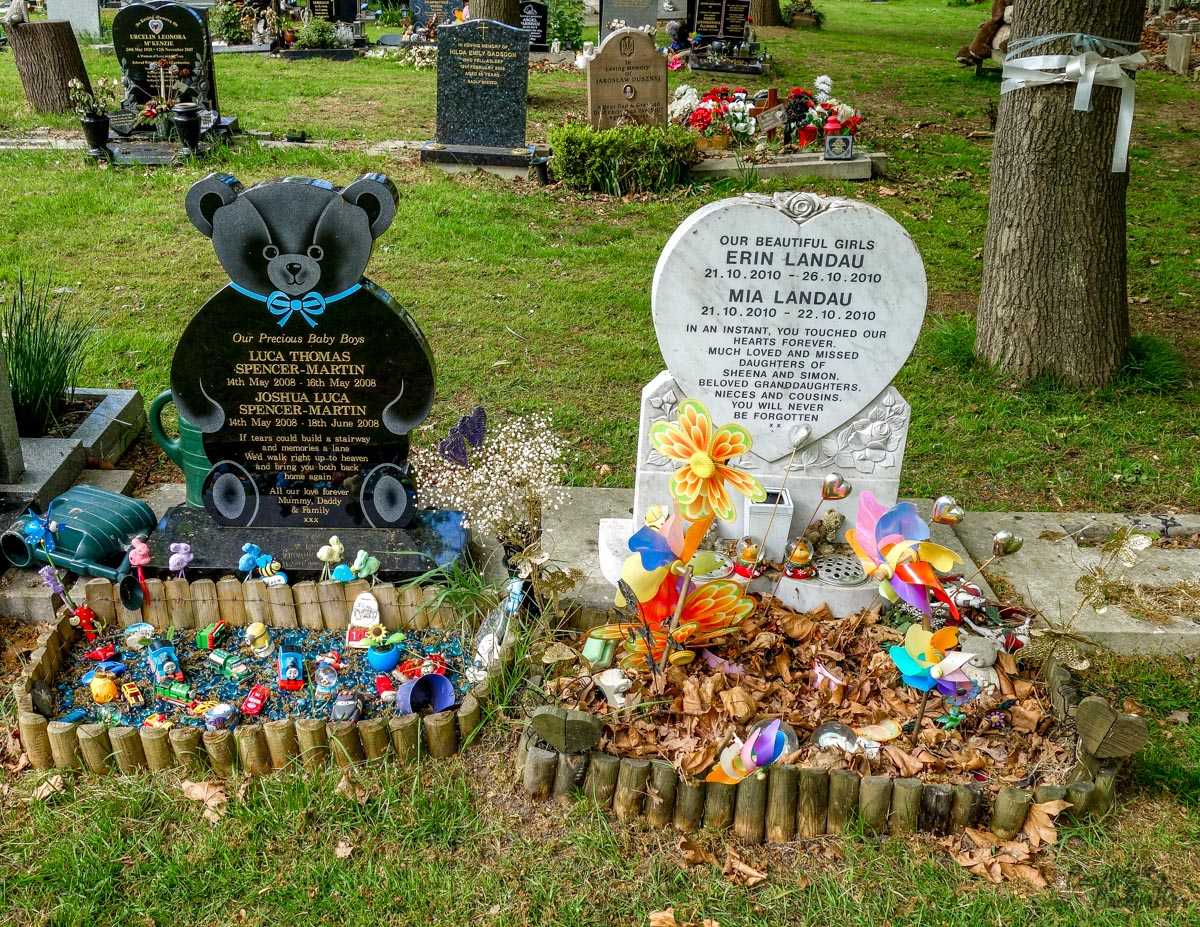 The churchyard is huge – around the size of 140 rugby pitches, or approximately one third the size of the entire City of London area. It’s divided into numbered sections, apparently, though signage is quite limited. This is a shame as it means I never found the most famous graves there – those of the legendary East London gangsters the Kray Twins. However, it was a lovely way to spend the best part of an hour, just wandering around the rows, lost in quiet contemplation.

My journey through North London ended back where it started, in Islington, and a site related to both ‘love’ and ‘hate’ in my life. On the corner of Pentonville Road and Islington High Street is a Victorian building of note. It’s currently in use as a bank, somewhat ironically given its place in pop-culture history. 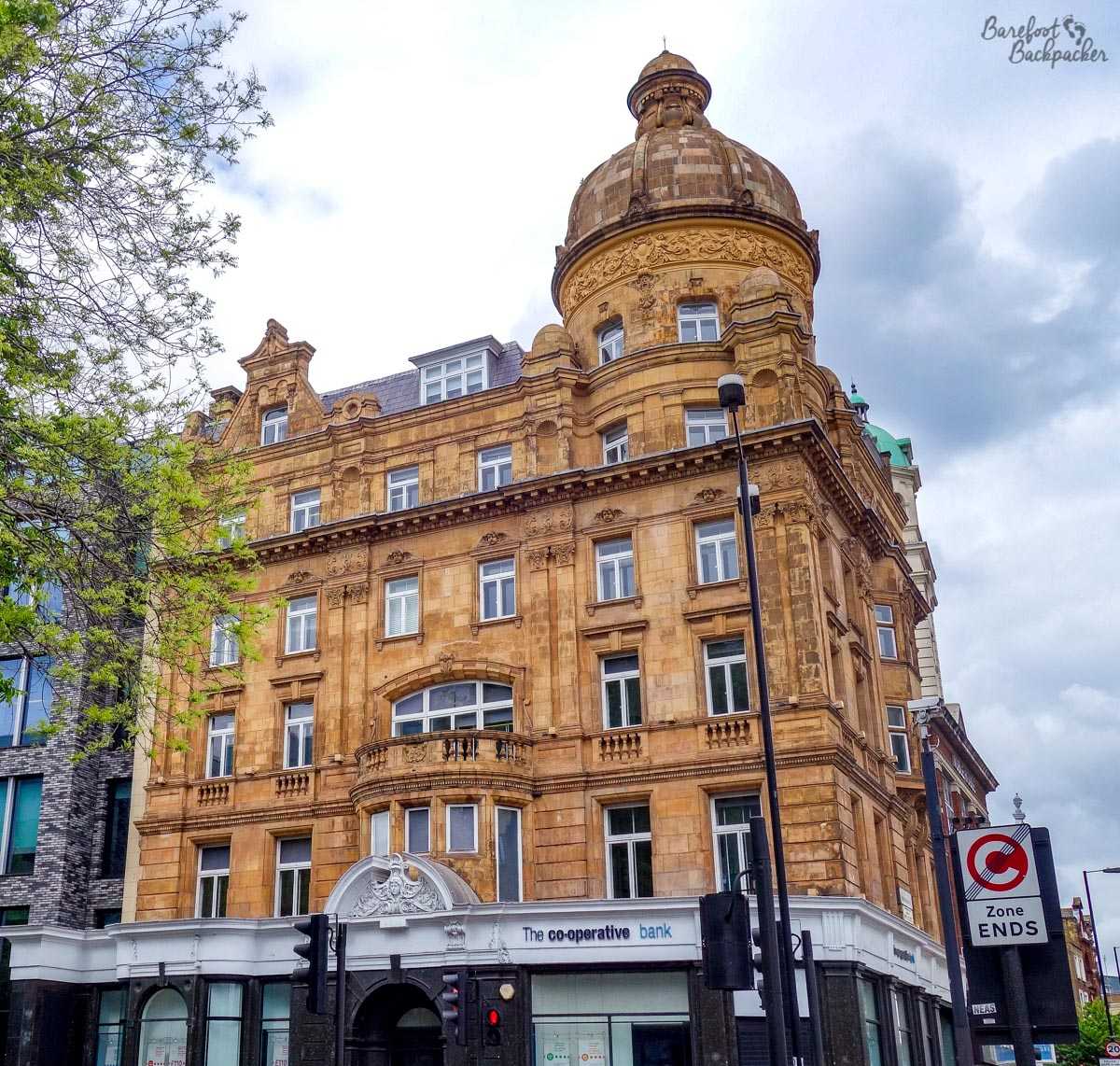 Front of what used to the be Angel pub, in Islington. No, it’s not blue, despite also this being Pentonville Road; Euston Road – the one in the middle on the board – is what Pentonville Road becomes, about a mile to the left.

One of the standard board games beloved by families, especially at Christmas or on long Winter Sunday evenings, is Monopoly. It’s a weird choice for a family favourite, in the sense that its whole gameplay seems to be to cause as much harm to your competitors as possible – it’s a regular cause of arguments and fallings out, and very often the game ends not when someone wins as when someone loses so badly that they fling the board off the table, the small plastic houses and hotels being buried in the carpet until the next time someone walks barefoot to the television.
In case you haven’t been ‘lucky’ enough to play it, the board is divided into 40 squares, 22 of them represent areas, mainly streets, in London, and the idea is to buy properties on them so that your competitors run out of money. Cut-throat capitalism at its finest (the reason the game was made in the first place, incidentally). One of the cheaper squares, the third cheapest on the board, isn’t a street, but a place – on the board because the designers of the English version went there for lunch and liked it so much they decided to use it. Which is a very English way of creating a board game. 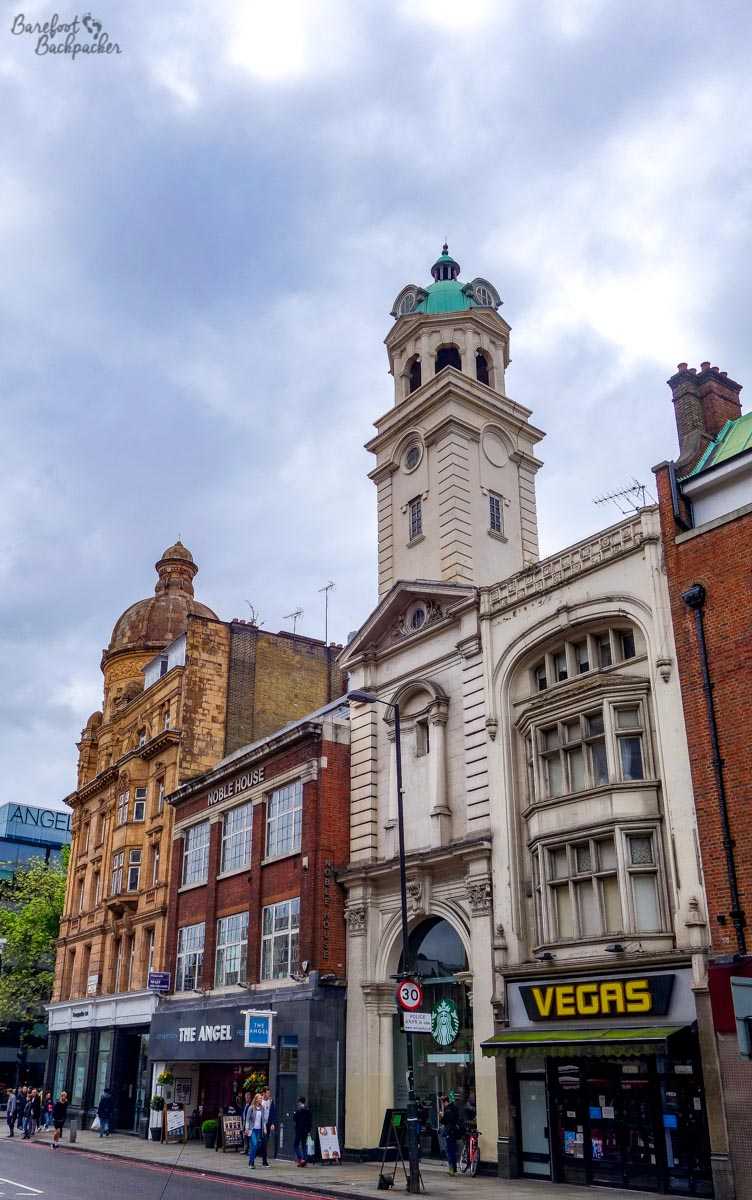 The High Street in Islington – with pub and old hotel dominating the corner. At least the pub sign is the appropriate shade of blue.

This building was The Angel, Islington – originally itself a pub and hotel (meaning it’s the only place on the board map that is itself the point of the game), but by the time of the board game had become a Lyons Tea Café. Had Lyons kept hold of it it would probably have become a Wimpy – at least this way it’s had a better fate.
The Angel, Islington still exists though, in spirit. The nearby tube station took its name, and next door to the old building, occupying the stables of the 17th Century coach-house, is a Wetherspoons pub; this particular pub chain have a habit of calling their pubs names that reflect local history, so it’s no surprise to learn this one is called “The Angel”. Unfortunately it’s not one of the Wetherlodges so you can’t stay there … 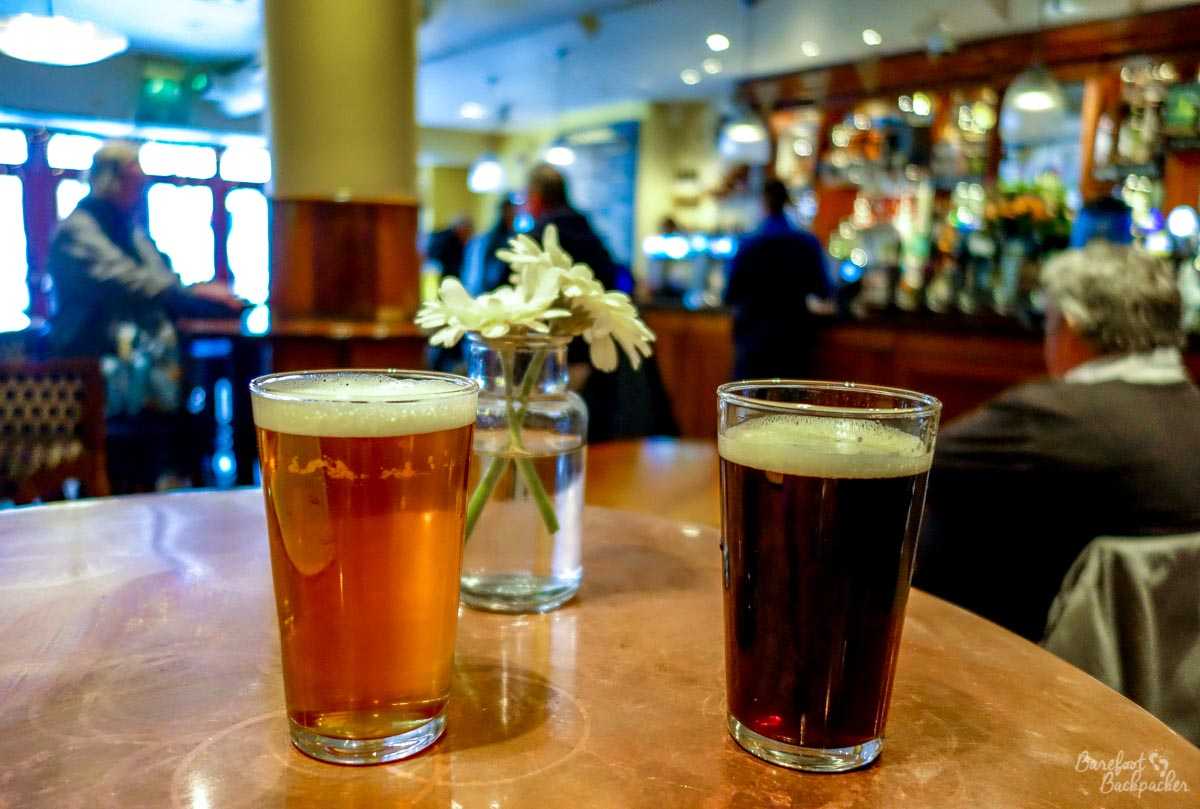 The beer was nice, but nothing special, but I felt I had to wander in and partake, just because of the iconic history of the place!

And I do love my beer!