The thing about Bruges is that it’s got a reputation for being one of those tourist-traps; somewhere that seems really beautiful and quaint, but when you get there you find it’s full of tourists, overpriced restaurants, and cheesy attractions.

Of course, that all depends on where and when you go … 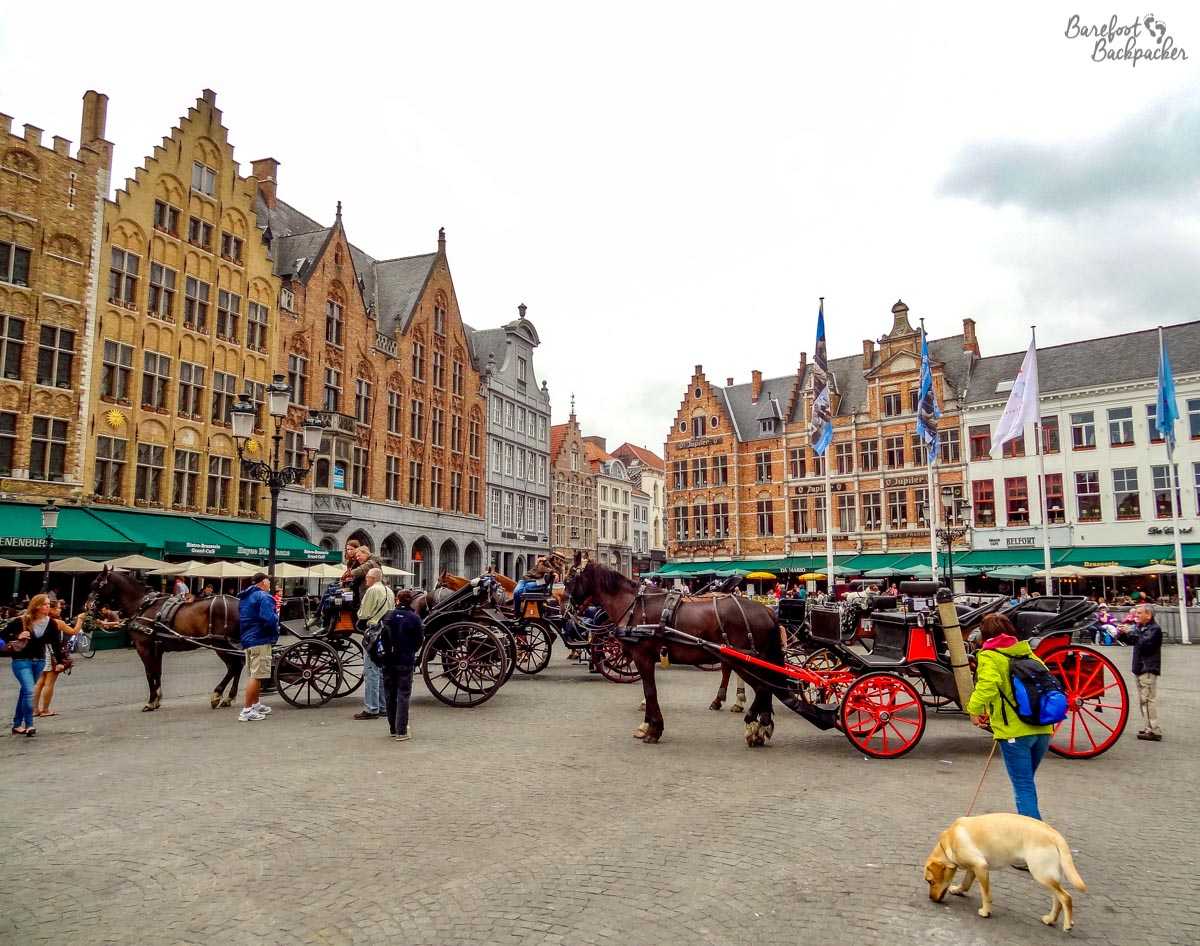 Carriages in the main square, waiting to fill up for the next overpriced trip around the town.

Bruges *is* full of tourists. However they tend to stay very much in the centre – the Grote Markt and Burg squares are lined with street cafés and visited by horse-and-carriage trip vendors etc – so every few minutes you get passed by a group of foreigners looking out of an old-fashioned carriage, cameras in hand, whilst the drivers smile and look friendly, knowing they’re on to a winner. Walking behind them are endless processions of tour groups, that get in the way of sweeping panorama shots, then block up the narrow passageways between the squares – the ones that are lined with old stone buildings and give the place that picture-perfect look – then lurk on the canal bridges preventing you from seeing the boats full of tourists doing water cruises. 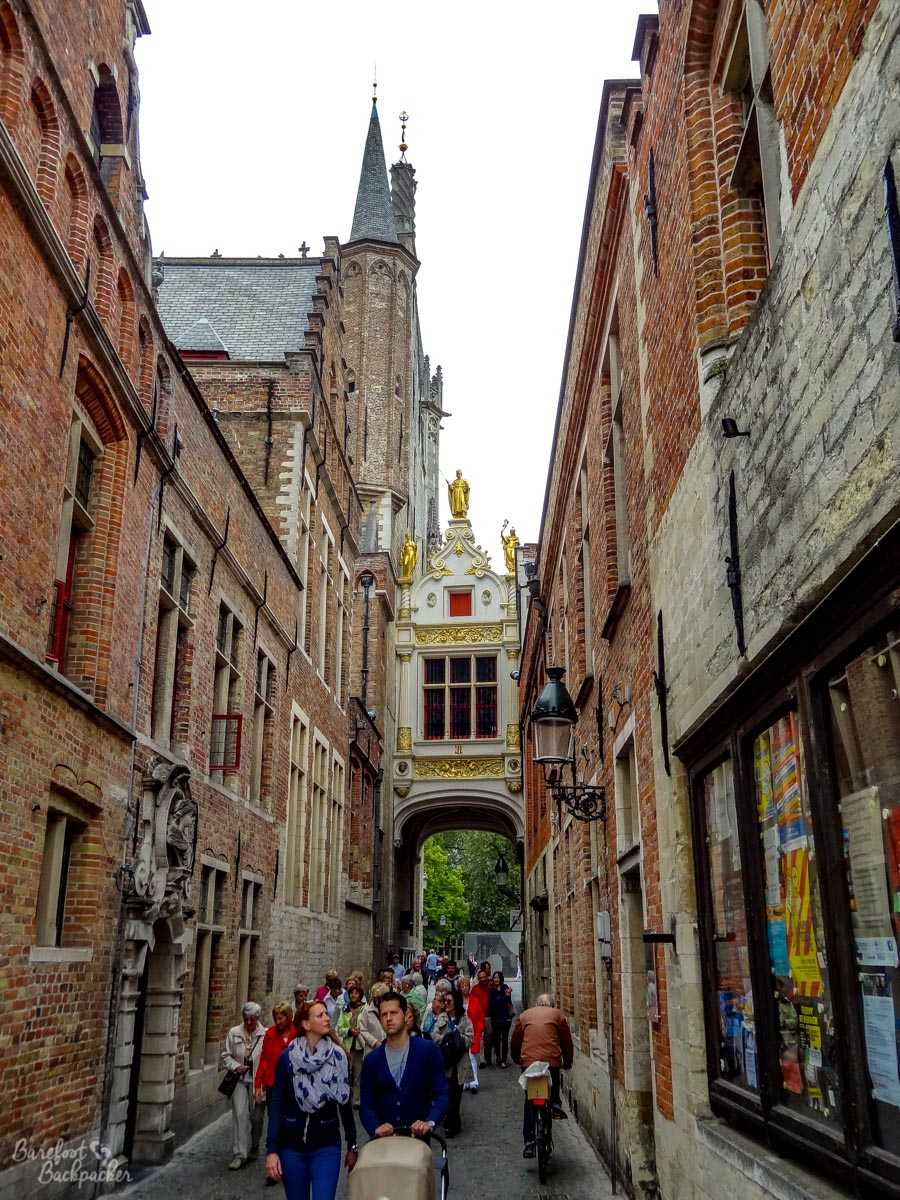 One of the alleyways in the old part of town.

If all this seems a bit off-putting, just remember: a few minutes’ wander away from the squares, venturing down these narrow alleys, and you can pretty soon be far away from anyone and still get the best of what the town has to offer. And it all feels very safe and comfortable; at no point did I ever feel that I was in danger of being mugged or anything like that. 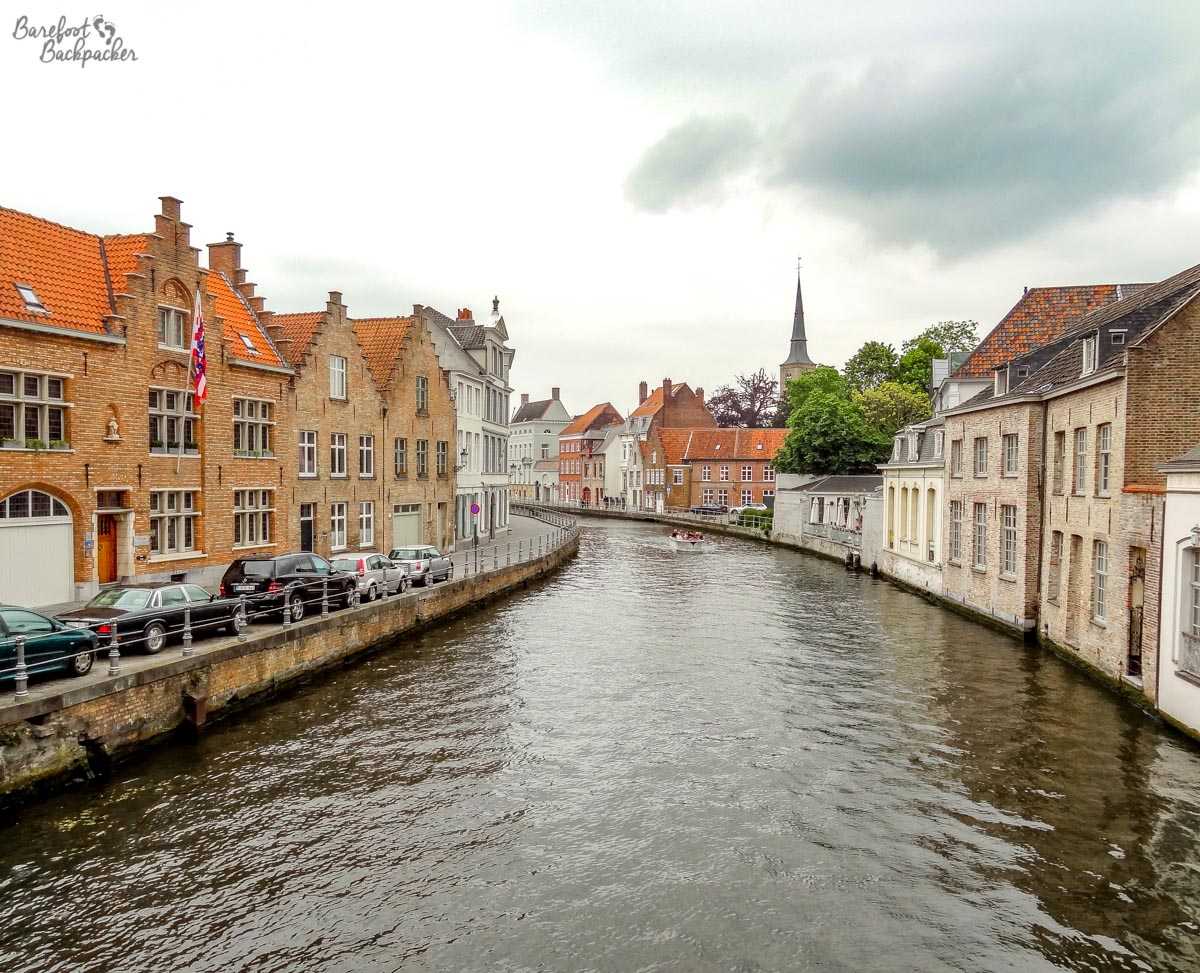 The main canal in the centre of town; it looks like it should be a really quiet and scenic spot to live.

One of the canals forms a kind of ‘ring’ around the town, and there is a very scenic path along it that runs through parkland, over small weirs, and past a couple of old towers and fortifications; indeed this path was my first impression of the town as it seemed the easiest way of getting from the railway station to my B&B. Apart from the occasional cyclist, and local walking their dog, I had the route all to myself – the tourists were headed straight into the town centre. Further along the canal, as it itself branches off into the centre, there is a small road lined with cobbled pavement and stone terraced housing that was equally as empty and chilled. 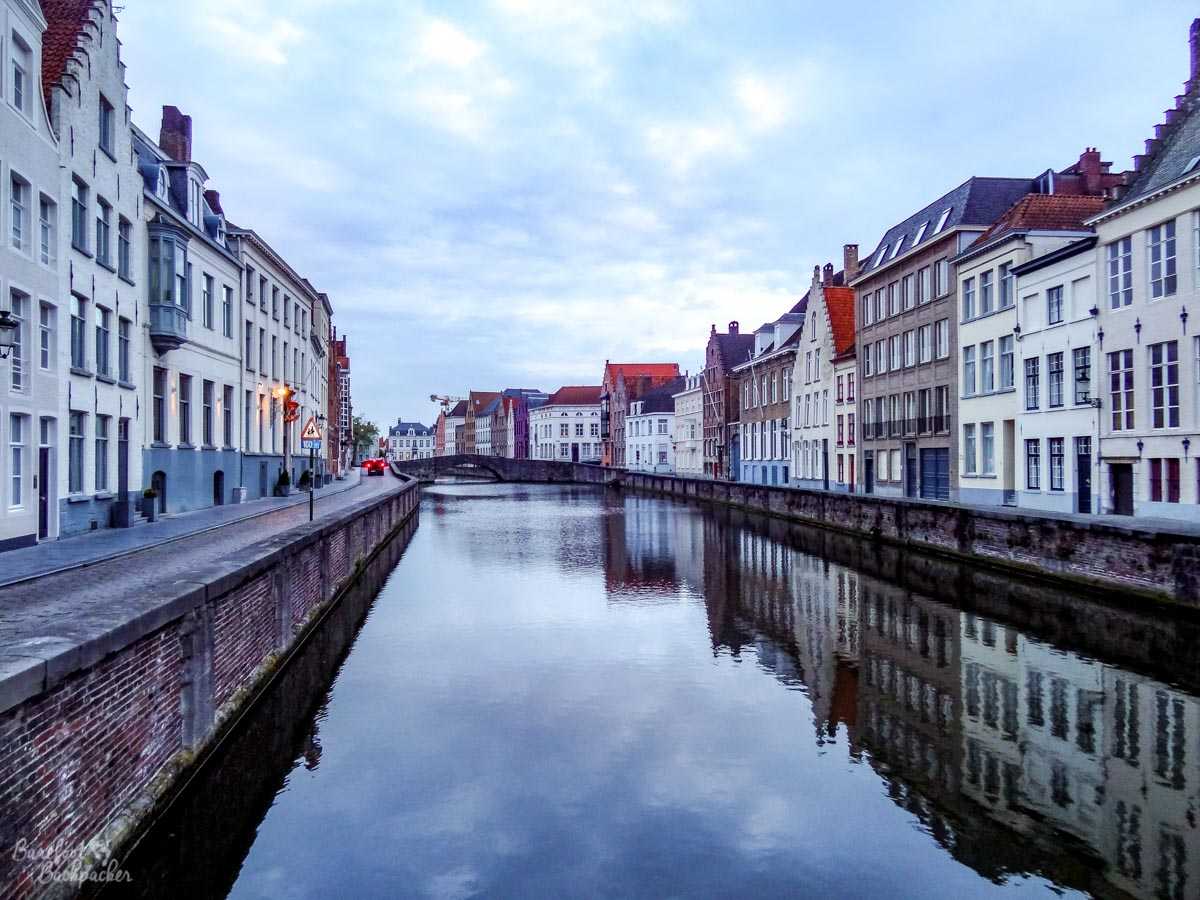 Reflections in the canal at dusk.

The other advantage of exploring the backstreets is you find the best refreshment. This, of course, is Belgium, and Belgium is (in my eyes at least) most noted for its beer. While bars and cafés are everywhere, to get a feel for authentic beer you have to seek out the ones less advertised, that only research beforehand lets you find out about. A bar called “de Garre” is hidden away down a pokey alleyway off the main street between the two squares; although in the centre of the city it is completely unadvertised, and very low-key. Finding it is worth the hassle though – the beer menu itself runs to 4 pages, and that’s not including the Trappists and the fruit beers! Beer is served with small pieces of cheese – presumably to ‘cleanse’ the palate between drinks.
The bar makes its own beer, in fact – a very rich, very hoppy, and quite flowery brew that’s quite similar to lager, but very much full-flavoured, rather than it being bland and metallic. Interestingly, maybe 90% of people in the pub were drinking it!
The other beer I tried in there was from a brewery called de Struise; a 10% dark beer called Pannepot. It claims to be made with ‘candy’ as well as spices. I’d say it’s rich, with a roasted chocolate aftertaste which hits after about 2-3 seconds. There is a little ‘spice’ taste, possibly turmeric.

Now, if I were to recommend you do one thing in Bruges, it would be to stay overnight. Remember how touristy I said it was? The vast, vast, majority of them seem to be daytrippers, either coming in by ferry from the UK or catching the train from Brussels. My visit was in early June, so darkness didn’t fall until well after 9pm. And do you know what? Walking through the main squares after 8pm and it felt like a Sunday morning – apart from one or two waffle-vendors and a handful of locals, there was nobody else there. It’s a perfect time to amble around and take stock of the buildings, the location, the historic feel of the place. 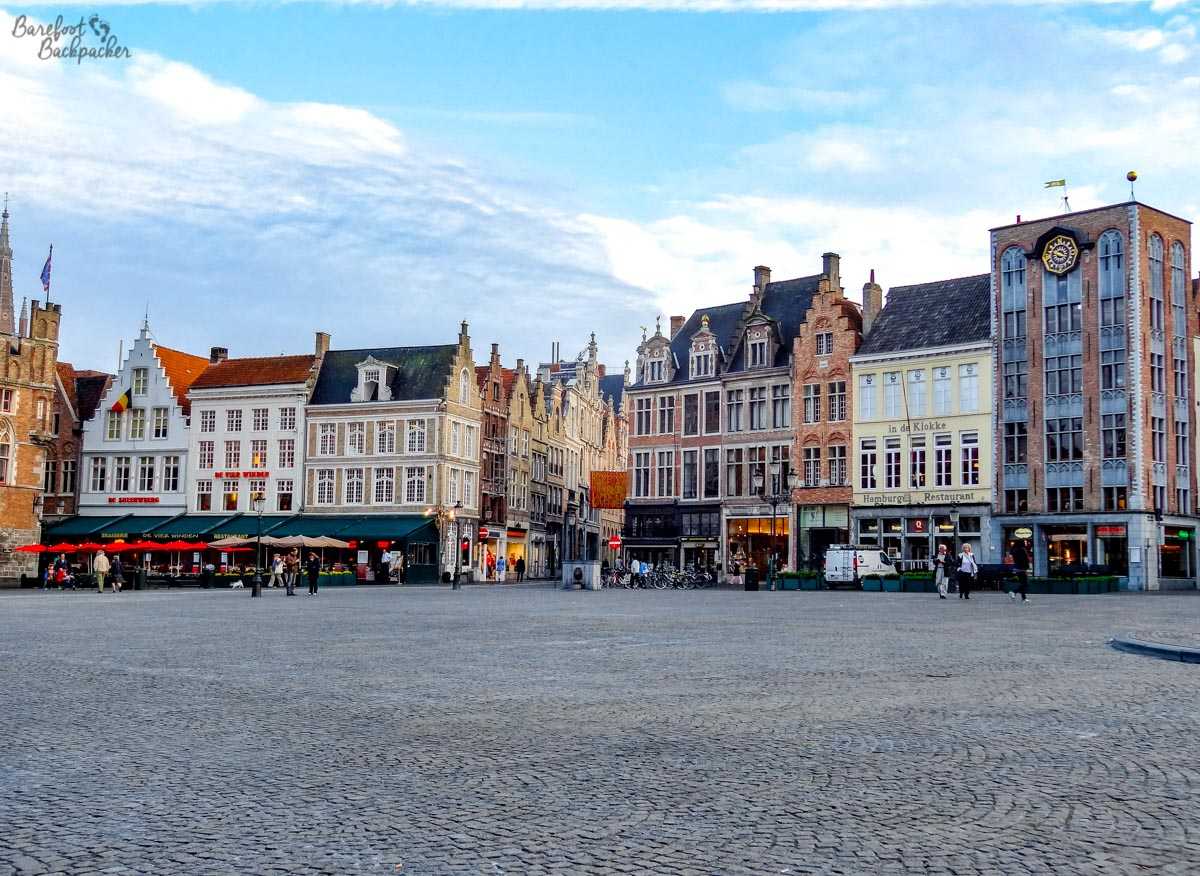 The main square around 9pm. Feels like a completely different world.

The B&B I was in (“Bed & Breakfast Marjan Degraeve”) is near the outer canal ring, a reasonable but pleasant stroll from the centre, along barefoot-friendly cobbled roads through quiet neighbourhoods. It’s … quirky; absolutely ideal for someone like me. 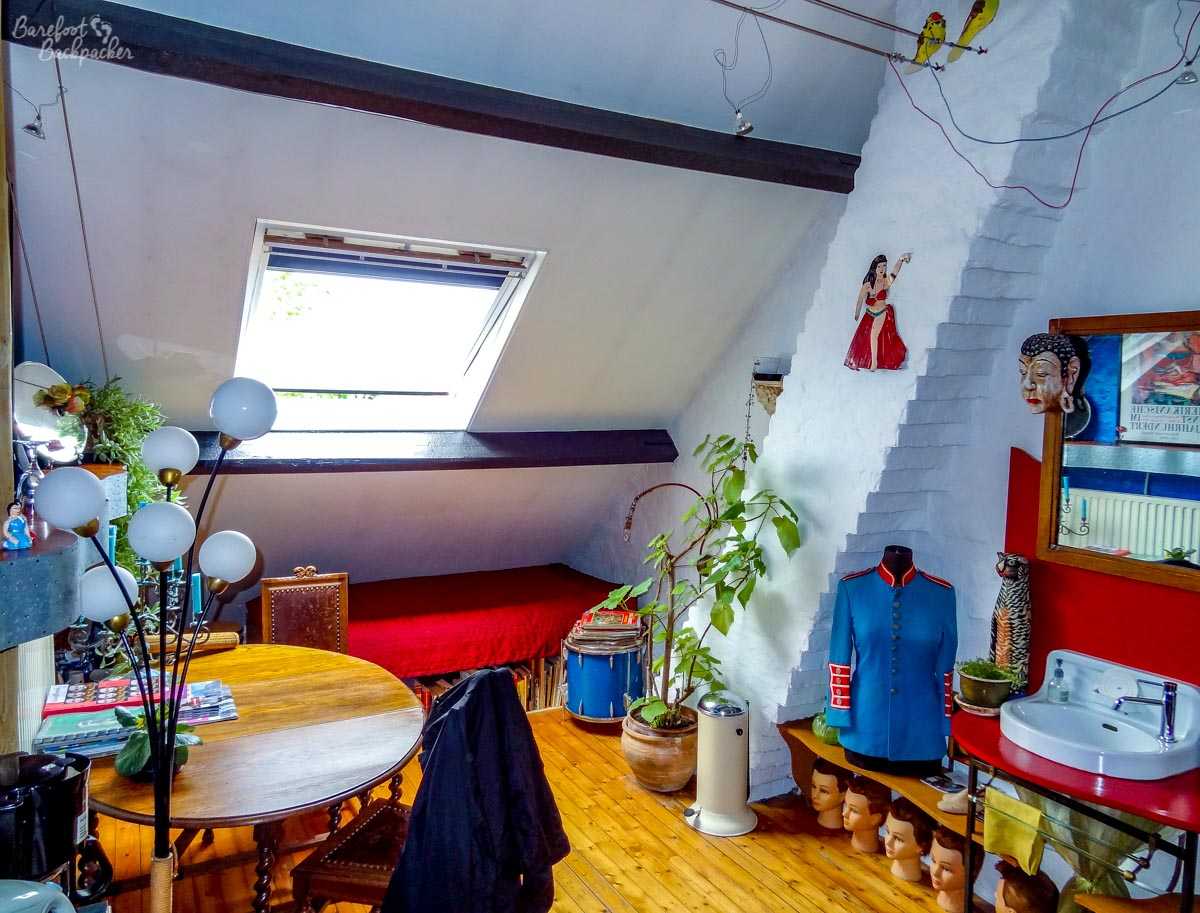 The far end of the room I was staying in at the B&B. It was just as odd all the way throughout.

It feels more like two rooms in someone’s three-storey town house, rather than a fully-fledged B&B maybe predicting the rise of AirB&B by a couple of years? The rooms and hallways are decorated with … whatever they’ve found that people haven’t wanted, in an almost Womble-esque fashion. There’s magazines and sheet music on the walls, mannequin heads lined up underneath the sinks, religious sculptures on the stairs, and frankly quite odd miscellanea scattered around. To cap it all, in the bedroom I wasn’t in, there was a toilet whose light-switch was wired in to the radio, so if you went in and turned the light on, the radio came on … 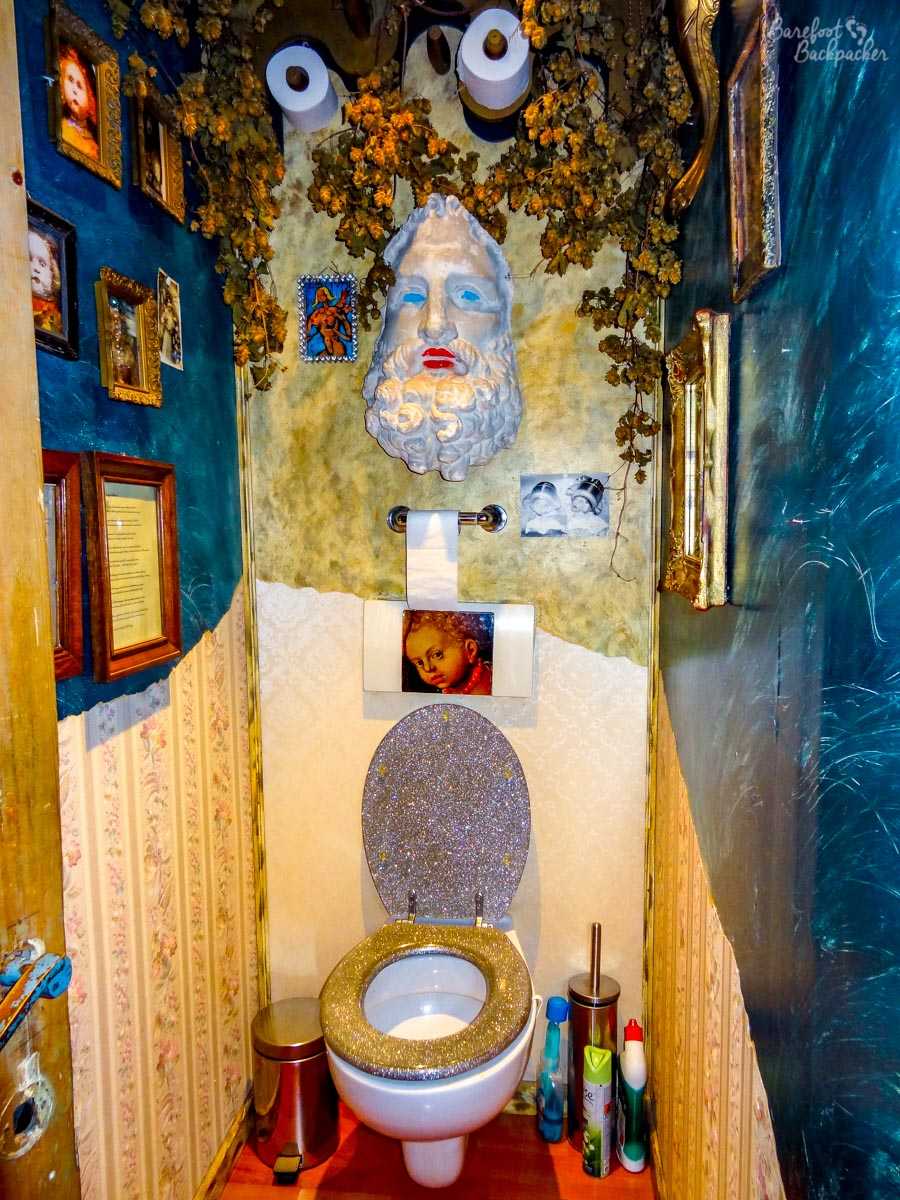 The interesting toilet in the second room. As if the decoration itself wasn’t notable enough.

In addition, they brew their own beer (which was fab) and wine (which I didn’t try because I don’t mix drinks!). For breakfast, at an agreed moment in time, Marjan comes upstairs and puts on top of the little fridge outside the room a covered tray with bread in it, making sure the fridge has things like soft cheese and jam. I’m then able to take as much or as little as I want for breakfast.

As to how she started in business in the first place, she said that 20 years ago she was working in a café, when one of her friends came up to her and asked if she knew anywhere she could stay the night. Marjan gave her the keys to her house, and she’s been in the hotel business ever since. As for their homebrew; she said that the queues to get hold of the mythical Trappist beer ‘Westvleteren 12’ from the abbey got so long that they thought they might as well start brewing their own. 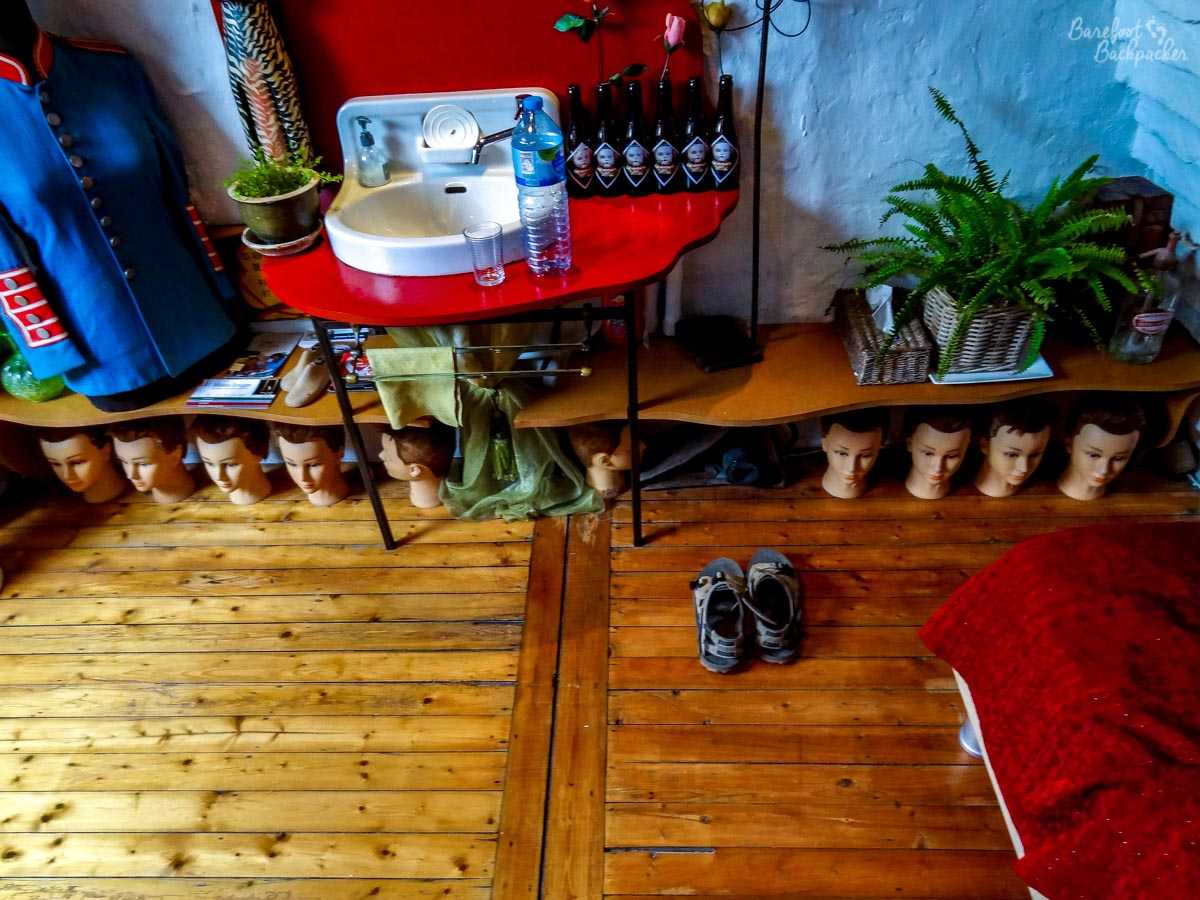 Still life of their homebrew beer, complete with disembodied mannequin heads. Because Belgium.

Much better than a chain hotel, or even a hostel!