Timor-Leste had been a country on my ‘hit list’ for quite a few years, although the reason is perhaps surprising.

Many years ago, when the Internet was in its infancy in terms of general use, I spent two years at University (I never graduated, because I quickly realised that a degree in Social & Economic History was virtually worthless and I’d be better off getting a job sooner rather than later. Also, ADHD.). Students everywhere are prone to picking up on perceived governmental wrongdoings, especially if the government in question is a far-off dictatorship. And so it was while I was at Uni. The big international talking point at the time amongst the External Affairs group was the situation in East Timor (which was about as far from the UK as it was possible to get and still be concerned about – I’m not convinced I’ve ever heard students criticising Fiji’s coups, and I’m unconvinced any trouble in Cook Islands would be on the radar of any student movement); as a result the name of the country lodged itself in my memory even if at the time the whole concept of ‘External Affairs’ passed me by (I was never a ‘politically active’ student. I did rag week once; that was as interesting as it got for me).

What happened here is a story of colonial indifference, cold war politics, and a general patronising attitude amongst world powers. No-one really comes out of it all that well – the surprise is that Timor-Leste came out of it at all.

It all started with the UN enshrining the concept of the right of colonies to self-determination, in a 1960 charter. Timor-Leste was, at that time, part of the Portuguese empire (apparently the 3rd largest colony at that time, presumably after Angola and Mozambique, which says a lot about the size of the Portuguese Empire), however although the charter was passed in principle, Portugal’s view seems to have been that Timor-Leste was an integral part of Portugal and not a colony, so were reluctant to do anything with it.

Following the 1974 revolution in Portugal, the new more-liberal government wanted to divest itself of its overseas possessions (partly, it has to be said, for financial reasons), and while in theory they favoured independence for Timor-Leste, they dragged their heels about doing so. This led to two things; firstly a clamour in Timor-Leste itself for independence, or at least autonomy. Some wanted integration with Indonesia. Rival groups sprang up and fought each other; to all intents and purposes Portugal left them to it. The group that favoured independence (FRETILIN) eventually won the civil war and unilaterally declared Independence. By this time, Portugal only had a couple of hundred military personnel in the country. The group that favoured integration into Indonesia (UTF) had by now fled to West Timor. The Indonesian government had had its eye on Portuguese Timor for quite some time, and these people fleeing from the East gave them a motive for invasion. 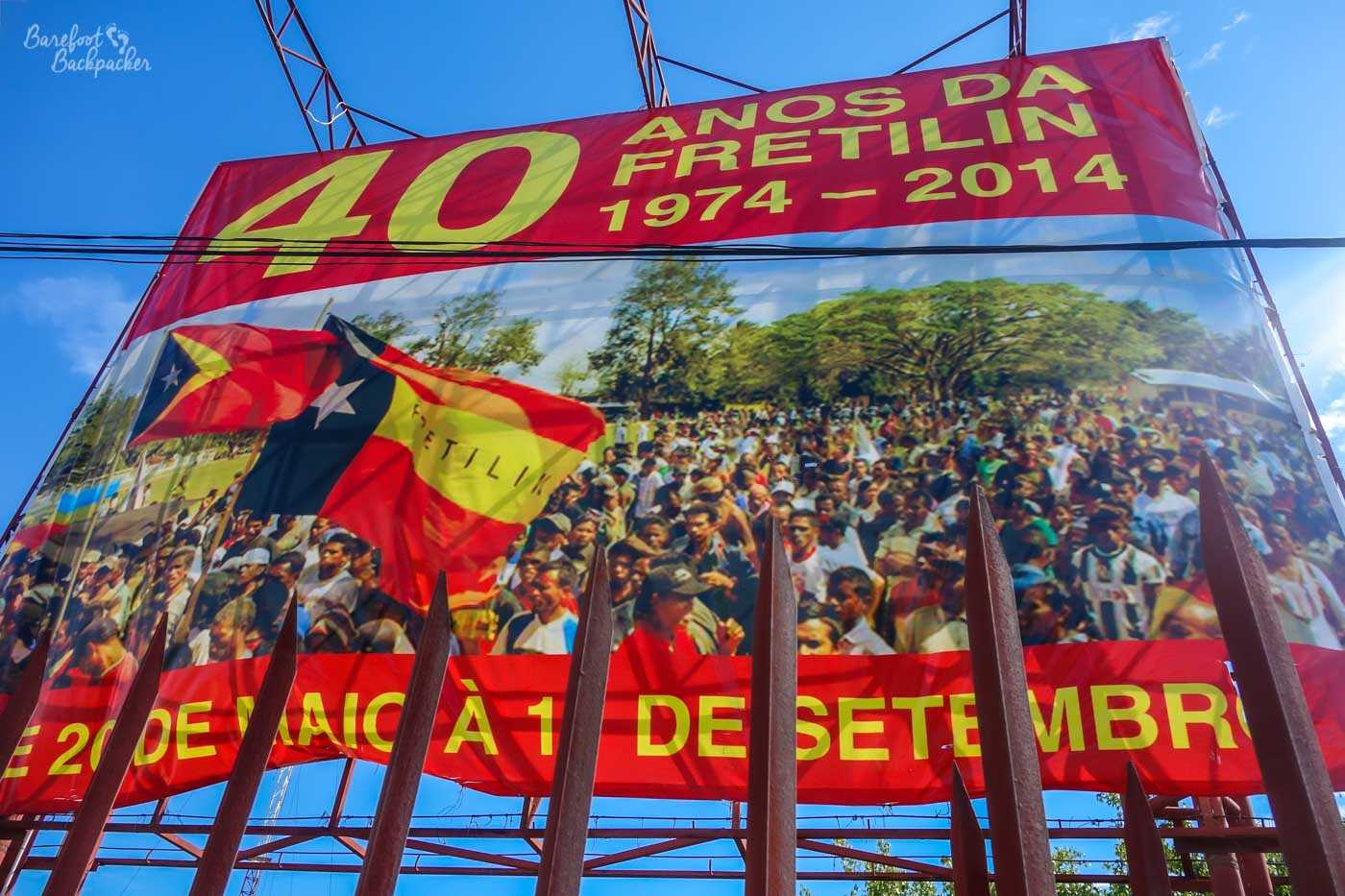 A poster for Fretilin, these days one of the main political parties in Timor-Leste (at the time, they were the main Opposition party).

It must be said that these weren’t the only players in the game. Indonesia courted the USA with tales of FRETILIN being Marxist, and having just been routed in Vietnam, the Americans weren’t terribly keen on another SE Asian country going communist. Australia saw Indonesia as a vital trading partner so wanted to keep her onside. The Soviet Union, oddly, were also keen on ‘stability’ in the region, and saw Indonesia as a vital buffer against Chinese interests in the region.
There was also a feeling amongst the Indonesian, Australian, and American governments that a country like Portuguese Timor was not large or strong enough to stand on her own on the world stage; they felt that the interests of the people were best served by them being a part of a larger nation, and Indonesia was the most logical nation to take ownership.

Consequently, with covert understanding from all the major world powers (China paid lip-service to the Timorese cause in principle, but in practice did nothing either way), and only minimal troops defending it, Indonesia invaded Timor-Leste in December 1975, and stayed there for over 25 years. 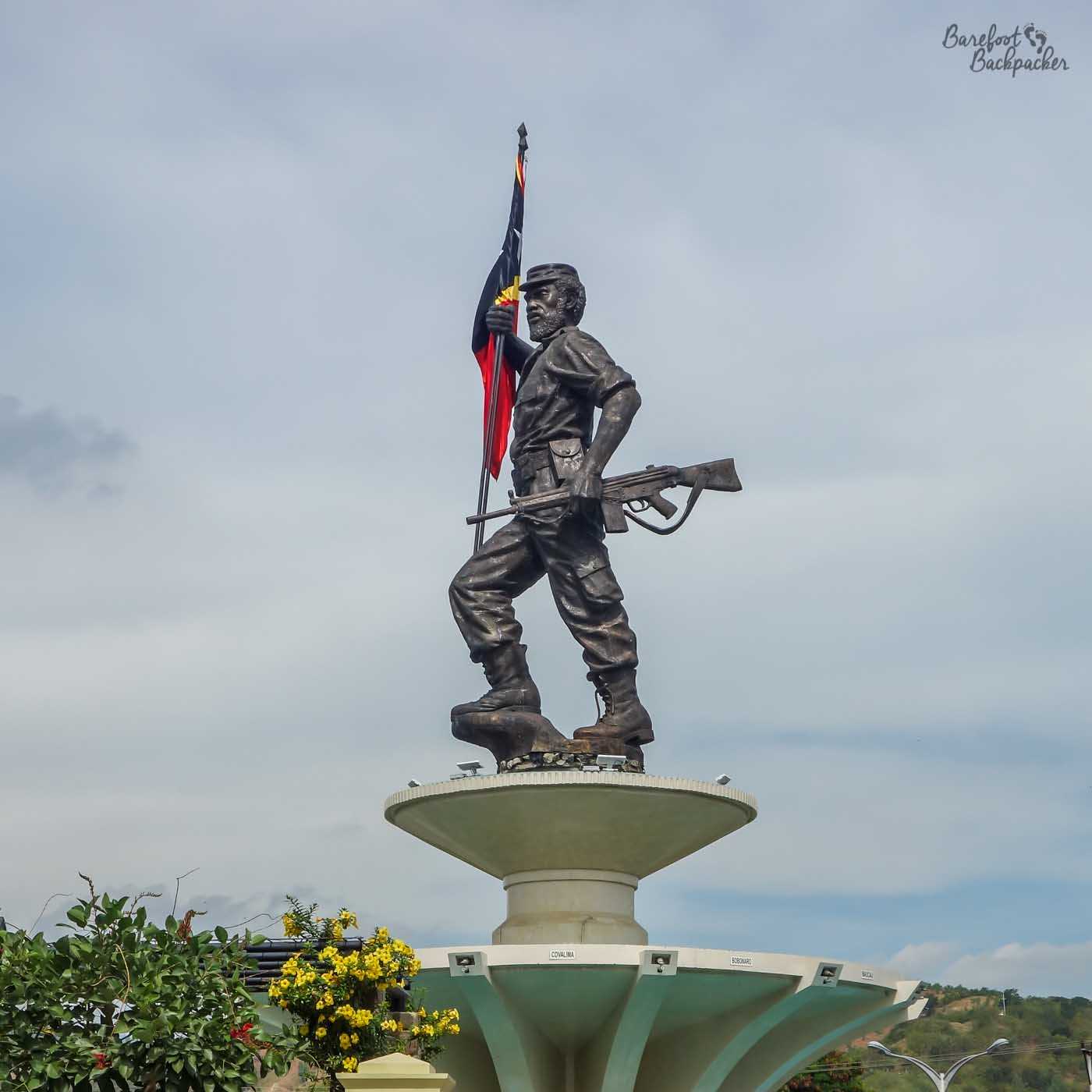 Nicolau Lobato, the first Prime Minister of Timor-Leste, in 1975. He was shot by the Indonesians in 1978 after three years of guerilla warfare. Dili airport is named after him.

Indonesian rule in Timor-Leste was best described as ‘harsh’. Some argue that the Indonesians did more for the region than the Portuguese ever did, but that’s what statisticians might call ‘a significantly low baseline’, in possibly the easiest game of ‘anything you can do, I can do better’ ever played.

As tended to happen with military takeovers in the 1970s, belief in the regime was obligatory and any perceived resistance was clamped down hard, with liberal use of threats, torture, and ‘disappearance’ (amongst the favourite euphemisms amongst officialdom for ‘taken, presumably executed’ were “gone to Jakarta” and “gone to school”; children, particularly girls, were favourite targets for the military, for reasons you can probably guess). By 1979, the Indonesians had declared the area ‘pacified’; the resistance (such as it was) had long been holed up in the mountains by this point and was basically starved and bombed to death.

The Indonesians also closed off the territory to foreigners, only opening it up gradually over the next two decades. Various resistance radio links were set up and then forcibly taken down, some operating out of Darwin were closed off by the Australians.

Throughout the 1980s, the situation in Timor-Leste was hidden from international public view; when the Indonesians invaded in 1974, they killed a couple of Australian journalists who happened to be in the way, and in general journalists weren’t allowed to remain in the country, It also should be pointed out at this point that the Australian government reaction to these deaths was ‘muted’; one might argue their deaths were ‘collateral’ for the ‘greater good’ of a friendly ‘Western-friendly’ Indonesia. 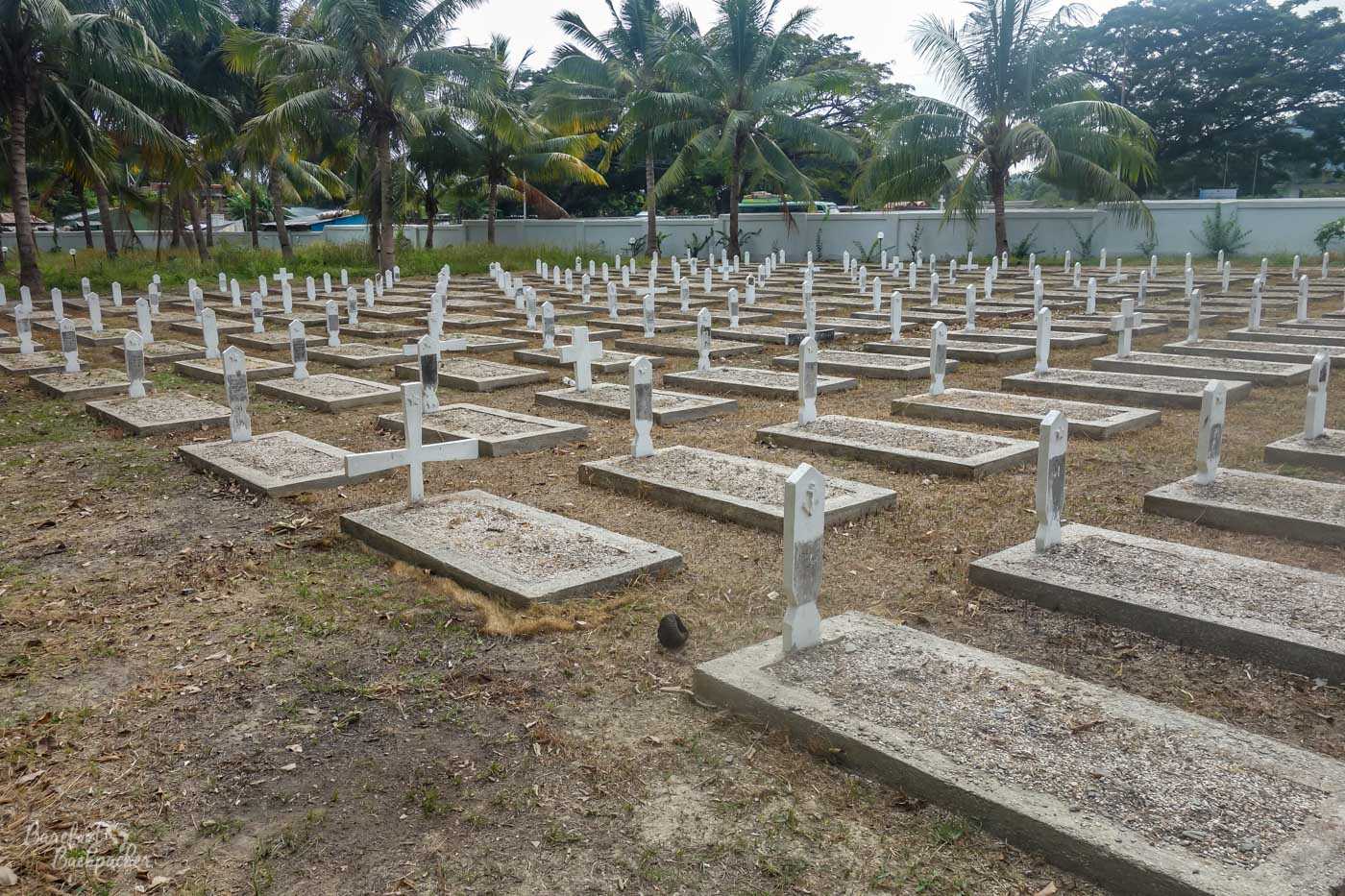 Cemetery in Dili. Plain graves indicate those killed by the Indonesian forces. The rest of Santa Cruz cemetery is filled with very colourful and stylish graves.

The Timorese tried to get their voices heard, but few countries were listening – aside from Portugal and parts of Africa, no-one really seemed to care that much. The only major world country or organisation to express certain discontent was the Vatican – East Timor is a strongly Catholic region and in the late 1980s Dili was the scene of a Papal visit, where he suggested self-determination was a good thing (without naming East Timor specifically, although obviously the fact he was there when he said it was rather pointed in itself).

Over time however, the situation relaxed slightly. Indonesia declared East Timor to be ‘pacified’ as early as 1979, and by the end of the 1980s, Dili and a couple of other areas were opened up to foreigners. However, restrictions on the Timorese were still quite rigid, and the military saw nothing wrong with shooting.

One such incident occurred in November 1991. A Portuguese parliamentary delegation was due to visit Dili, but the trip was cancelled at the last minute due to fears from the Indonesians that the delegation had been infiltrated by Timorese nationalists. Protests then occurred in Dili to object to this cancellation, and in the ensuing clashes, one protestor was shot. A few days later, his funeral took place, By the time the funeral cortège reached the Santa Cruz cemetery, the procession had been joined by a large pro-independence march, with banners and shouting slogans; although a predominantly peaceful protest at this point it was certainly a concern to the military.

What happened next is unclear (as is always the case in the heat of the moment, no-one knows exactly what the spark was), but the Indonesian soldiers at the cemetery started firing bullets into the crowd. In the ensuing bloodbath, around 250 protestors were killed. 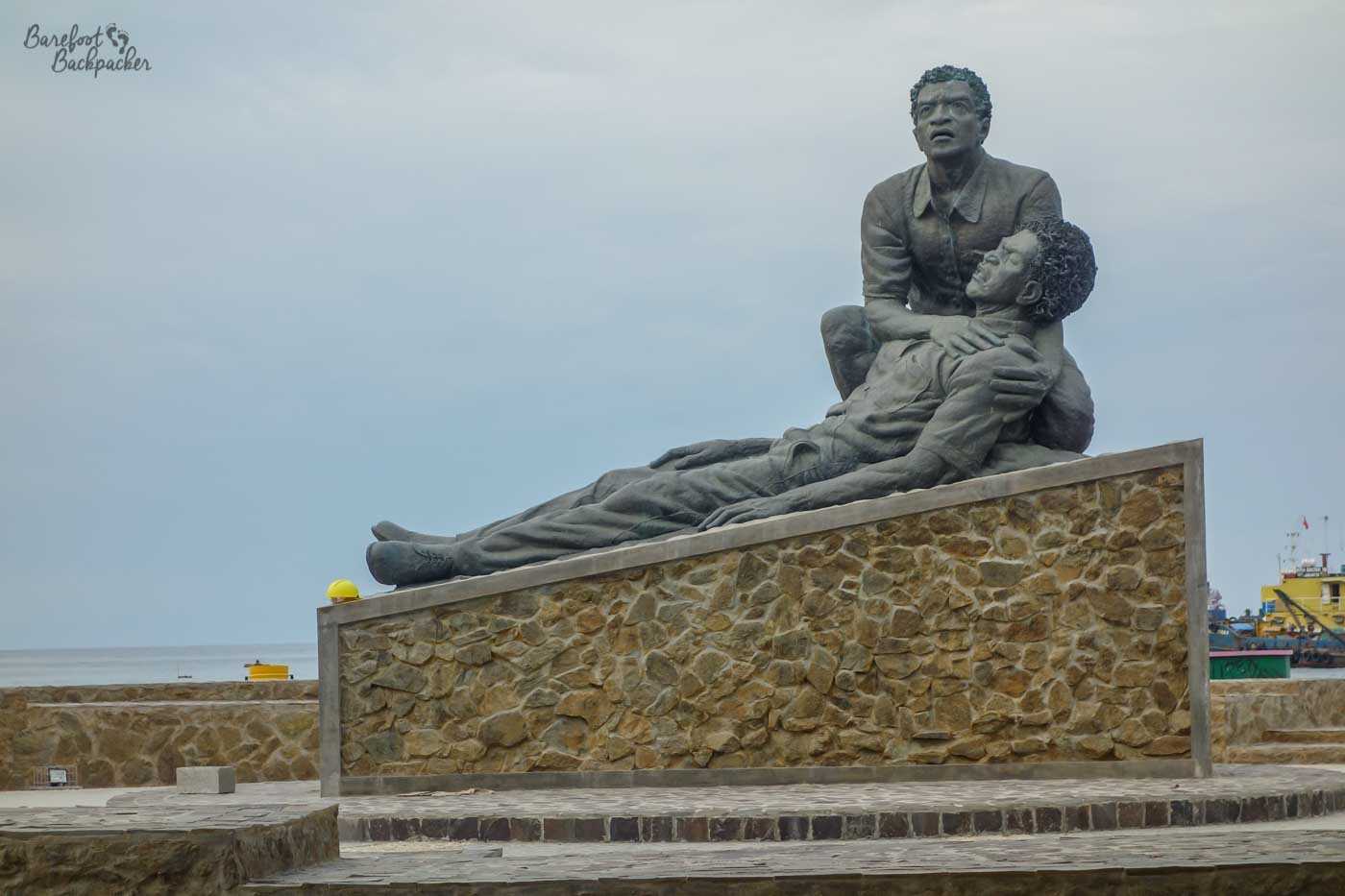 The Monumento 12 De Novembro – memorial to the Santa Cruz massacre. It’s on the seafront in the centre of the city.

This would have gone unnoticed, but due to the late cancellation of the delegation, several journalists were already in Dili ready to report on the Portuguese. Instead, they had turned their attention to the funeral, and ended up filming the massacre. After smuggling the film to Australia (who weren’t keen on anything showing the Indonesians in a bad light), it was broadcast around the world, much to the embarrassment of the Western Powers.

While this was the initial spark that led to East Timorese independence, the main catalyst was the resignation of the Indonesian dictator Suharto in 1998, caused by the financial crisis of the late 1990s. Independence was fast-tracked, and a referendum on it promised for the following year – 78% voted’ yes’.

So began the final period of Dark History in Timor-Leste. Within a day of the results of the referendum being announced, the occupying Indonesian army went on a rampage of looting and destruction. Partly this was as a result of frustration at having lost, but partly also there was still a belief within Indonesia that Timor-Leste couldn’t stand alone and would be at risk of civil war. In the violence, hundreds died and more either fled or were forcibly deported to West Timor. Dili was pretty much destroyed, and the country was left with virtually no surviving infrastructure; the Indonesians only stopped once international pressure became too strong. 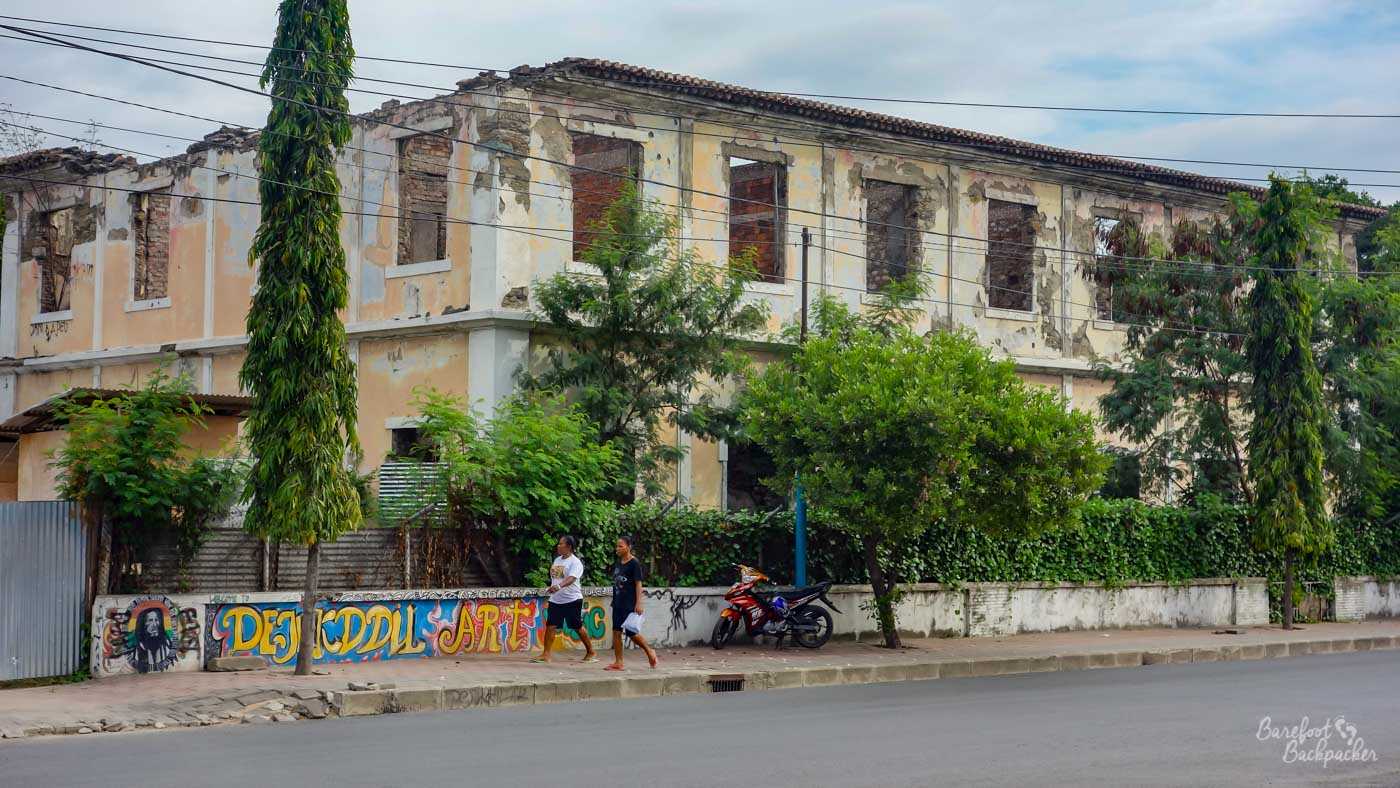 Remains of a building in Dili, destroyed during the civil war and never rebuilt.

Independence came in 2002, after three years of UN transitional administration. Even by the time of my visit in 2014, the country still hadn’t fully recovered.

2 thoughts on “Timor-Leste: Occupation and Independence”