The last evening of my Press Trip to the Plsen area was scheduled for a beer spa. Of course I’d never even been to a normal spa before; such things are well beyond my normal travel style. Consequently I didn’t know what to expect. Would it be weird? Would I literally be lying in beer? And would I have to be naked? Spoiler: the answer to the last question is: no.

What is a beer spa?

I leaned over and pulled on the tap. A firm stream of foam spurted out of the metal tube and into my glass. I pulled the glass close to my chest and settled back in the iron bathtub, the room smelling faintly of hops. 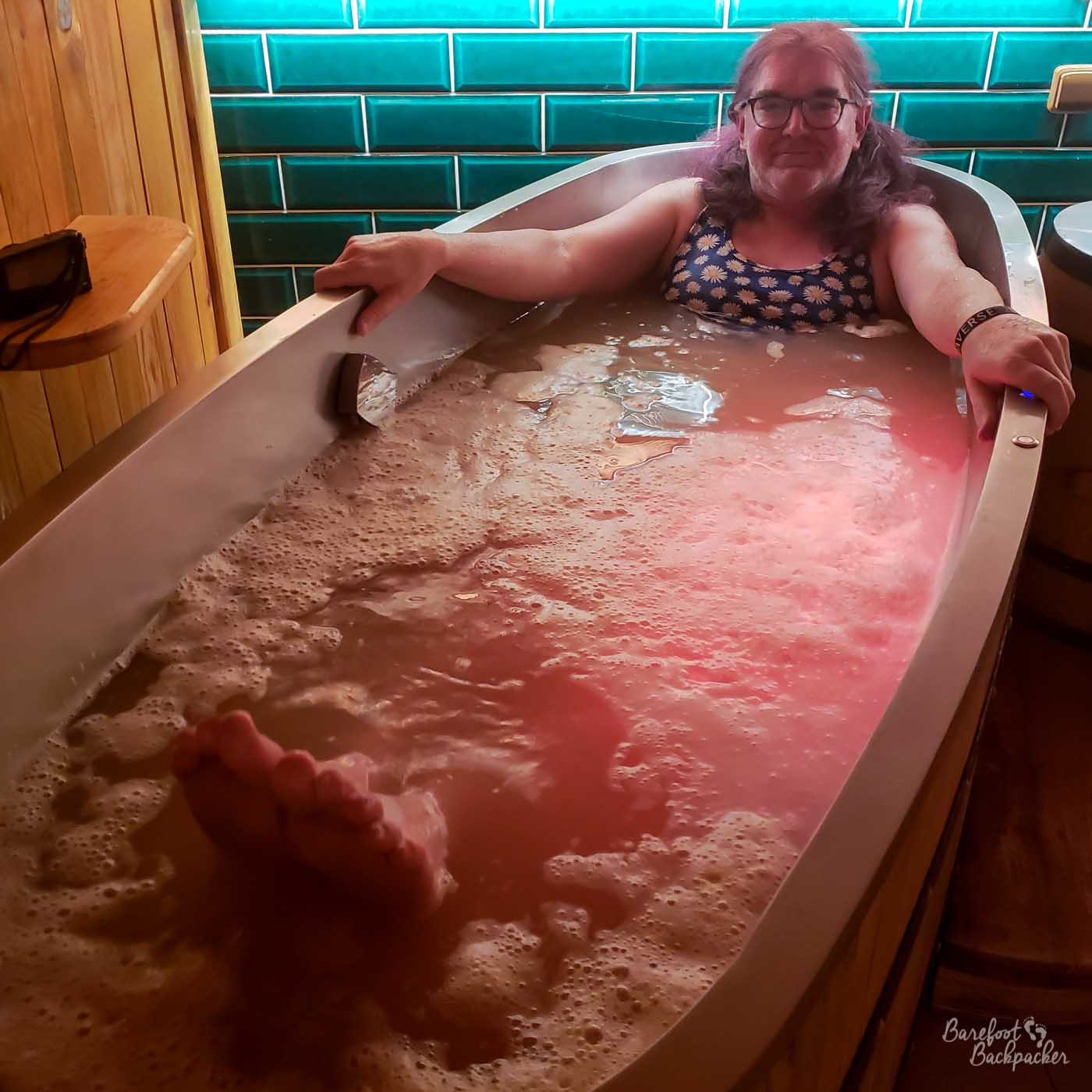 I am inside the beer spa bath. Tasteful

Now, the first question anyone will ask is: well, what exactly is a beer spa? Is it like a normal spa, just with beer? And the short answer is, yes. That’s exactly what it is. Not only is there beer easily available while you’re chilling, but there is the opportunity to lie in a bath of beer, with jacuzzi effects, while drinking it.

The beer spa section of the centre itself was in a room were four metal tubs, filled with yeasty hoppy malty water and herb extracts. Think of it as a bit like beer but partway through the brewing process. At the side of each tub was a tap from which you could pour your own beer. This was a standard Pilsner, of course, brewed by the on-site brewery. Not Pilsner Urquell, but just as real. And then you can just relax in the beery water and drink to your heart’s content. There’s a button you can push to make it effervescent, just like a normal spa bath.

The upside is, well, beer, and it’s very relaxing. The downside is my crop-top & leggings stank of beer all evening. I think we were in there for just under an hour, chatting and playing silly games. Yes, you’re in your own tub but you can see the other tubs from where you’re lying. It’s not a place for privacy. Rather it very much feels like a group event, so it’s almost certainly better to go along with people you know for the best experience. I’d imagine it’d be quite embarrassing to be there with strangers. 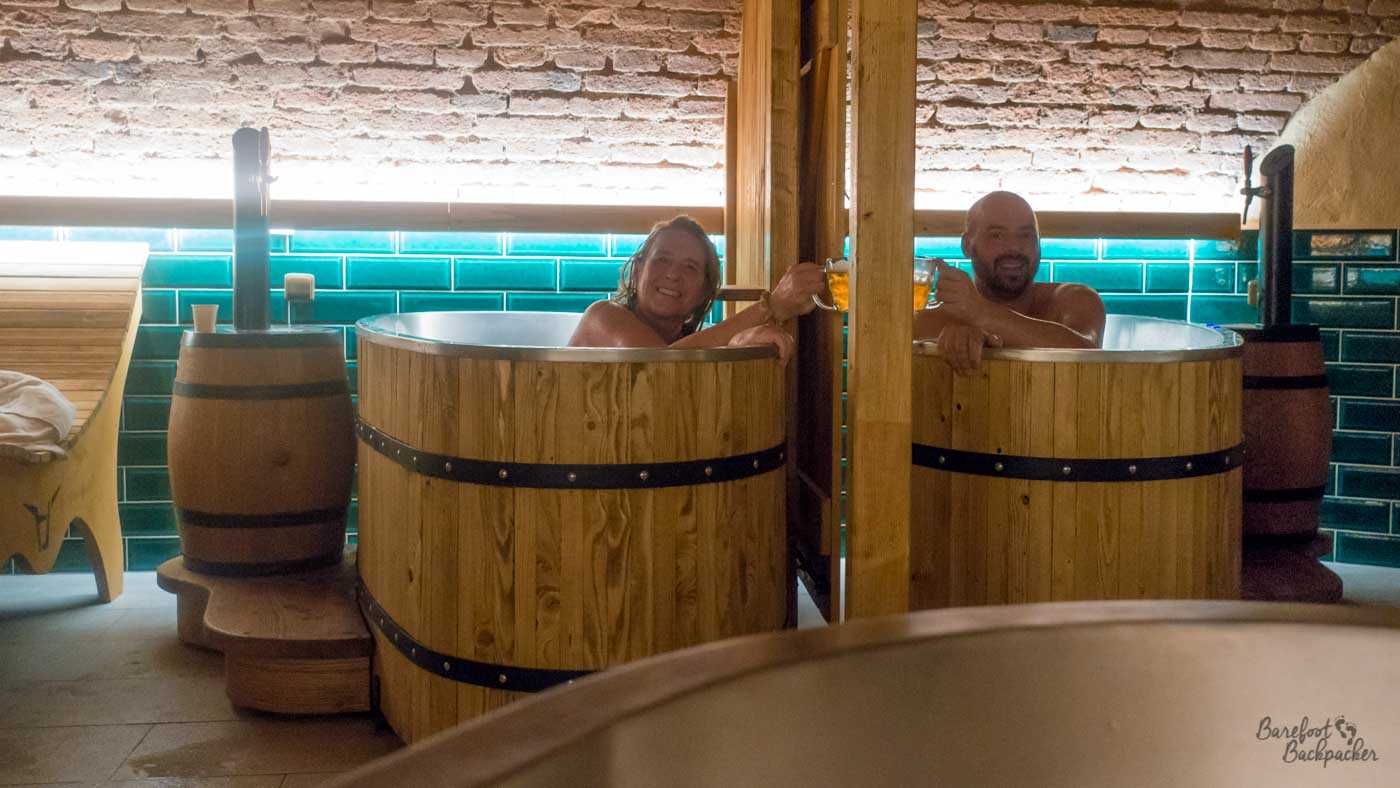 Jason and Carla Rupp, two of the other people on the Press Trip, showing off for the camera

A couple of technical points about beer spas. To fill up a tub takes between 30 minutes and an hour, and the beery water inside is kept at a temperature in the mid-30s°C, similar to the temperature I have my showers. It’s slightly slower than my friend in Sheffield’s hot tub. They’re supposed to be good for the skin, given the higher levels of vitamin B in the proto-beer, and one of the reasons the beer tap is next to the tub is because you officially need to stay hydrated. You’re also supposed to take a 20 minute rest after stepping out the beer spa, which gives you more time to rest and drink beer in your room I guess.

Incidentally, the first beer spa was, of course, set up in Germany in 1997; the first in Czechia followed in 2006 in Chodova Plana, which is a small town near Plsen, obviously.

What else can you do at a beer spa?

We were staying at the Zlata Krava brewery and wellness centre. It’s in a small but very pretty village called Nepomuk, that in different weather and with more time would be a good base to do some hill & country hiking.

But we were here mainly for the ‘wellness’ part of the centre, which is a statement I never thought I’d be saying. And by ‘wellness’ I mean the hotel has an on-site spa and sauna, and we had a couple of hours’ exclusive use of the facilities. It may not be surprising to hear, but I’d never been to any kind of spa resort before so this was all new to me. I started in the hot tub – a large pool of water, like a hot tub or jacuzzi where we could just chill and relax. It was next to a sauna room which I opened the door of and realised I couldn’t breathe. 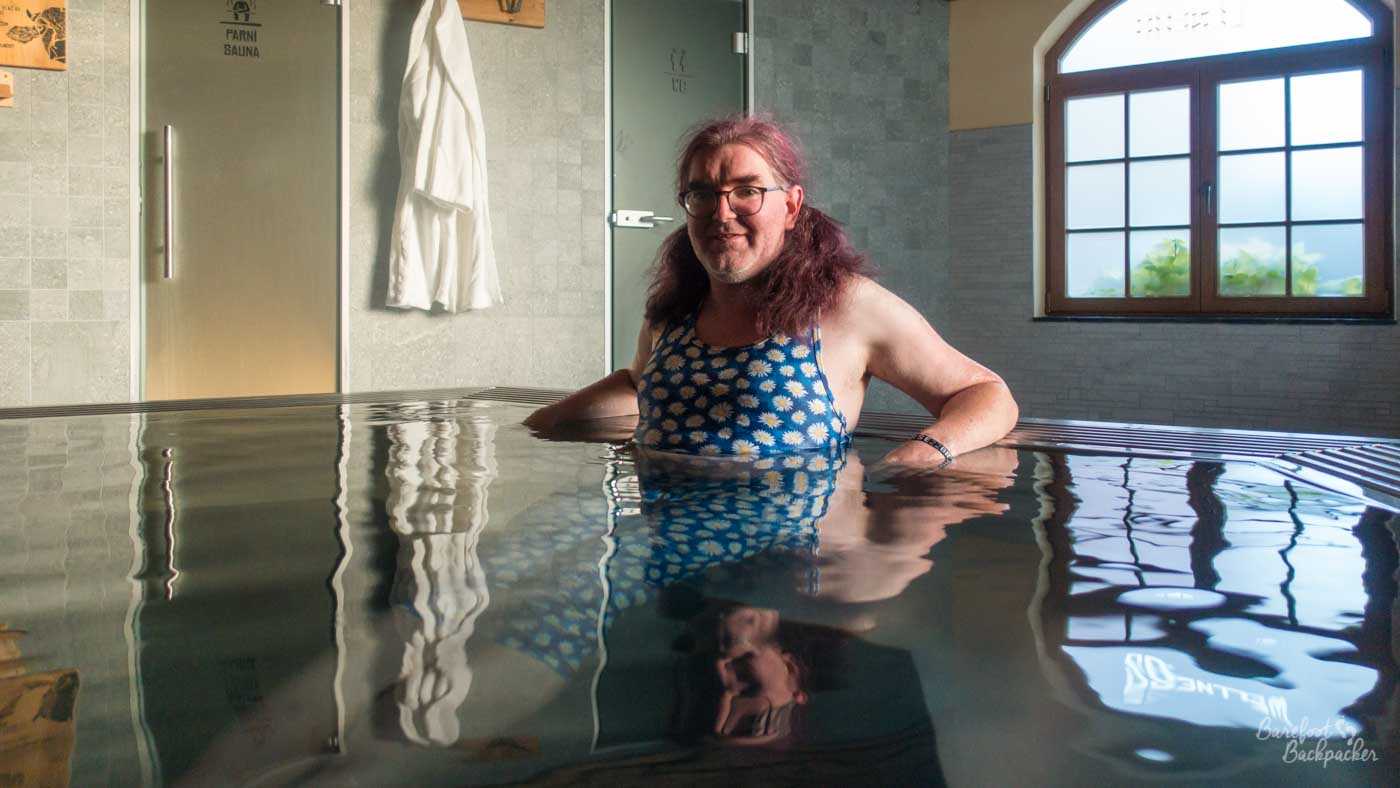 Next to the hot tub were a couple of small foot spa & stone massage tubs, which was very refreshing; videos will be available on my OnlyFans, obviously … :D. 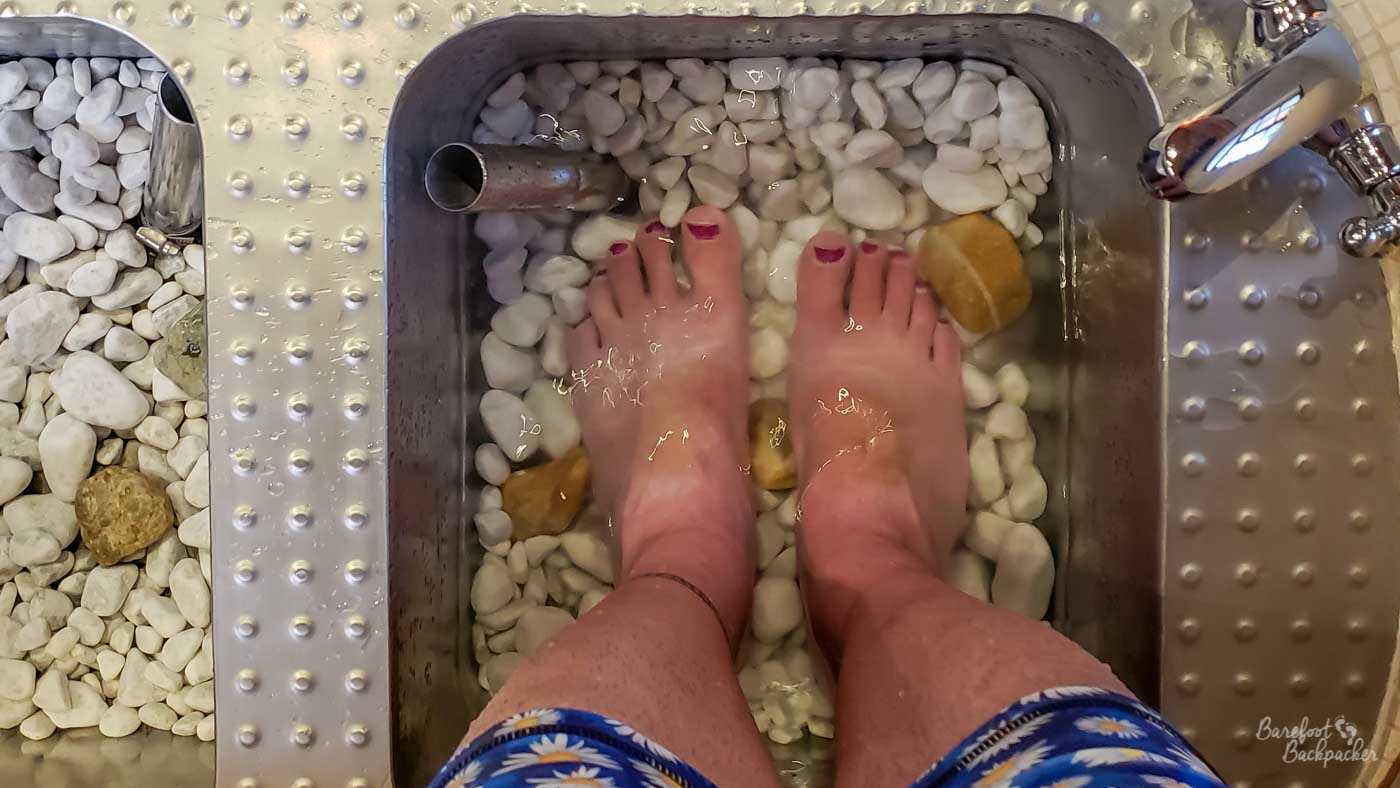 A couple of rooms away was the ‘Finnish Sauna’ – a room with a wooden fire pit where you poured water on to make steam. This was quite intense, & I realised the further up you sat the hotter the atmosphere got. I’m also not quite sure what the difference was between a ‘Finnish Sauna’ and a normal sauna room, other than I could at least breathe in the Finnish Sauna. Neither came equipped with long twigs to beat yourself with, nor snow, though I’d imagine in the height of winter, snow could be easily available. What little we saw of Nepomuk and its surrounds suggests it’s good hillwalking and hiking territory; it would also be a cool place to base yourself for cycling trips, if two wheels floats your, er, metaphor.

Zlata Krava means ‘golden cow’, and many of their beers are cow-themed. The hotel has over 15 rooms of various sizes and each of them is named after one of their beers. I was in the ‘choco cow’, a black stout with chocolate notes that … wasn’t being brewed at the time of my visit, sadly. It was the last of the microbreweries we’d been visiting in the Plsen area. 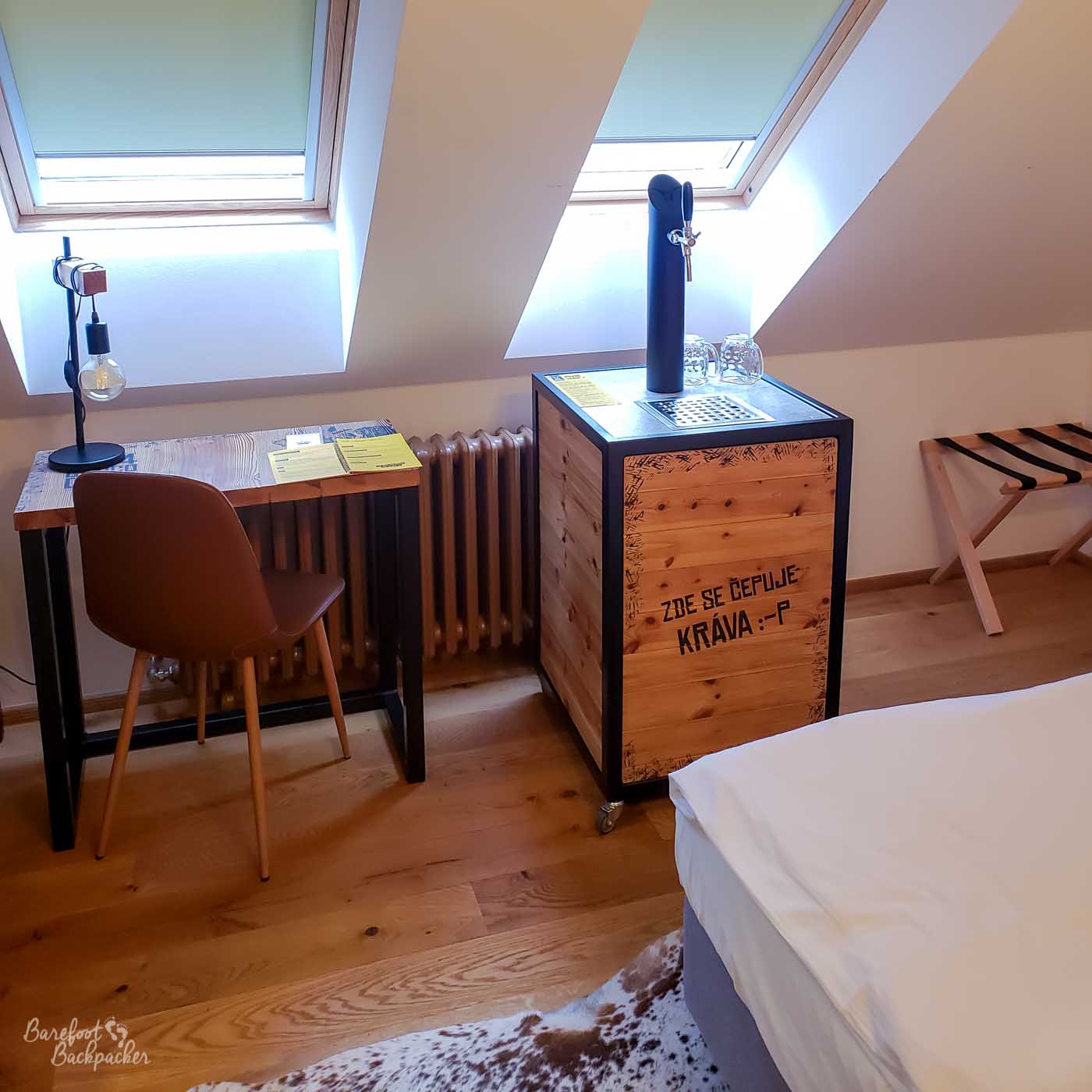 The room I stayed in, before I sampled the beer

Each of the rooms has at least: a bed, a table, a large bathroom with shower, and its own beer tap dispensing Pilsner to your stomach’s content. Some of the rooms are larger and have more amenities – I was in a standard twin room but it was absolutely perfect for my needs. In the room are dressing gowns and bathroom slippers, for use when going between the rooms and the spa area. 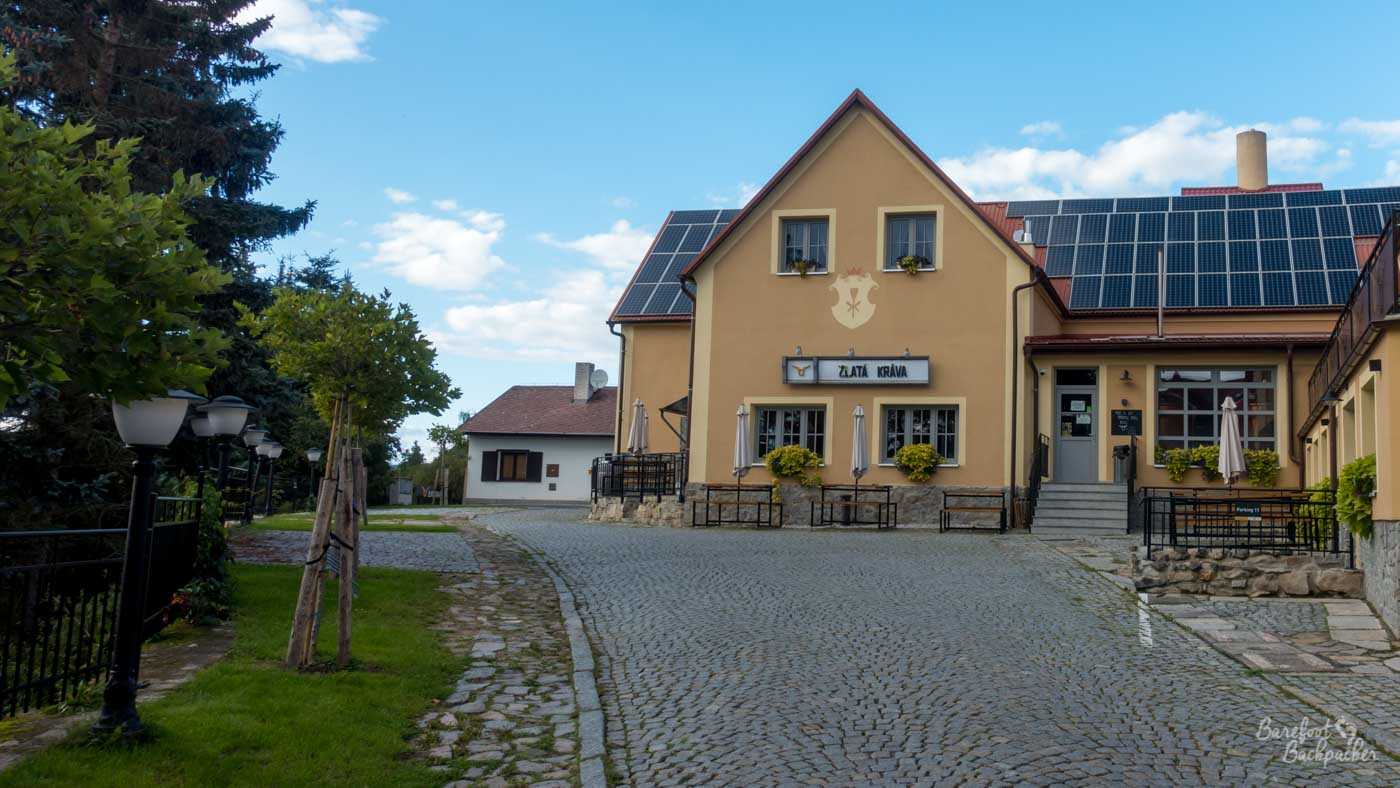 On site is a small bar, and some food is available, but we ate at the adjoining hotel. This was in a really large room reminiscent of an old Victorian-era building, with high ceilings and decorated walls. Zlata Krava beer was of course available. On our visit we were given a three-course meal with beer pairings with every course. The starter was a kind of pate with rye bread and fancy fruit, paired with an APA. Main course was a beef with celeriac and beer gravy, paired with an IPA. Dessert was a kind of chocolatey fondant cake and berry coulis, paired with a lemony cream ale. This is normally something you associate with wine, so it was really interesting to see how it worked for the beer. It must be said that sort of thing is generally lost on me since I just, well, I drink what I like. 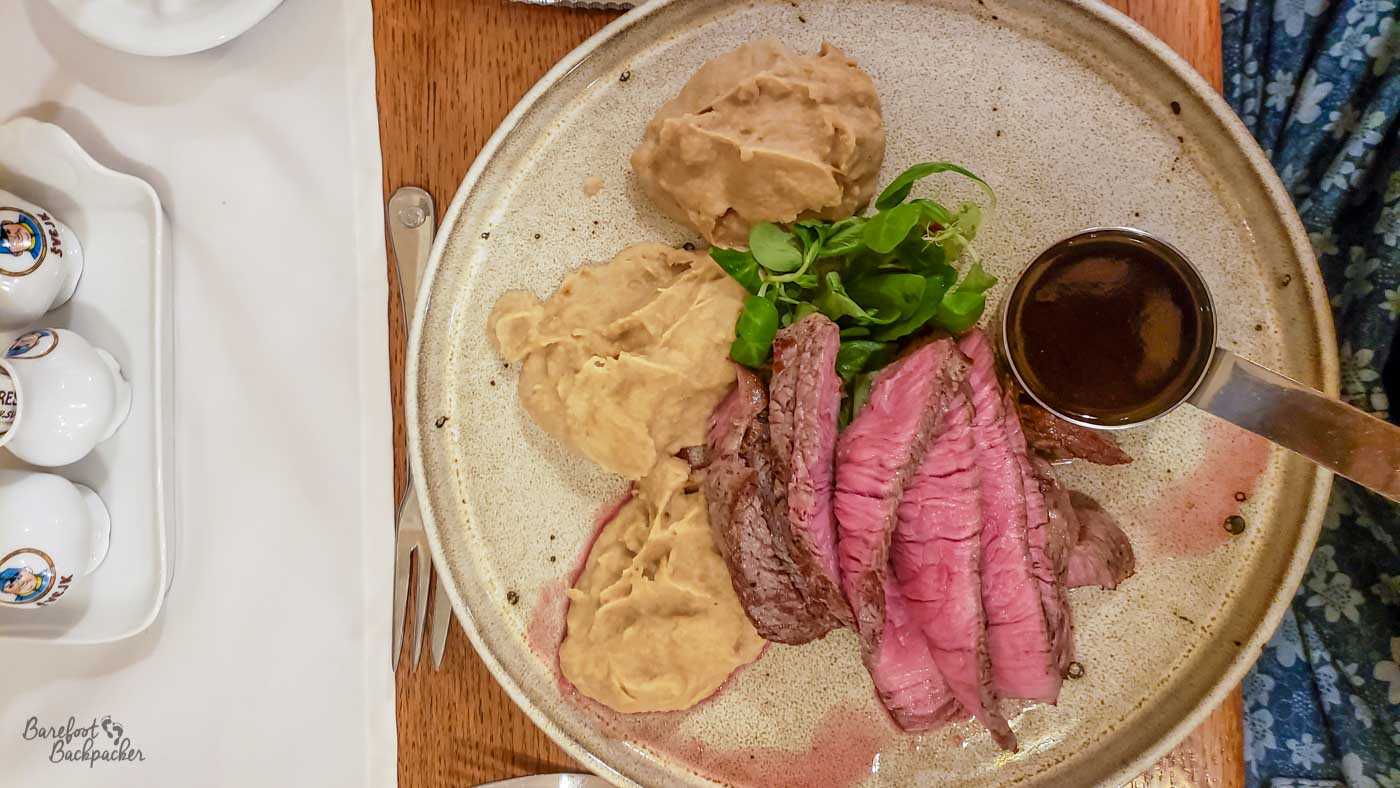 We also had a quick tour of the brewery itself, which it must be said was pretty much looking at large metallic vats of beer and going ‘oh, let’s sample that’. It’s not a big brewery, but they do make a large range of beers. Aside from the obligatory pilsner-style lager we had: a smooth hoppy Märzen; a newly-brewed orange pale ale; and a strong sweet stout that had the vibes of red wine. 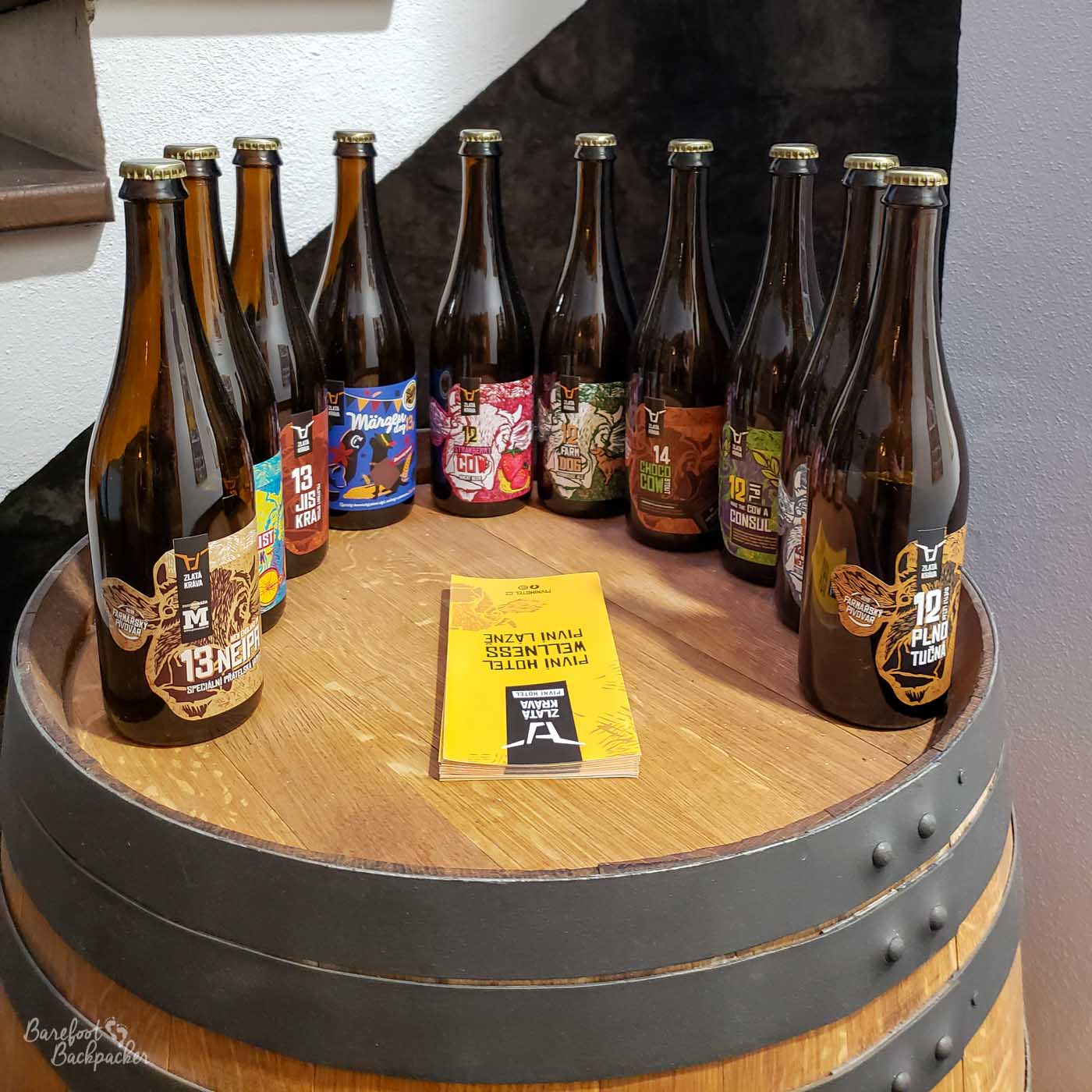 Some of the beers available from Zlata Krava

Where is Zlata Krava and how do you get there?

Zlata Krava hotel, brewery, and beer spa is in the village of Nepomuk. about 35km south of Plsen. At the time of writing, getting there by bus seemed to involve changing in either the villages of Chocenice or Přeštice. And not at weekends.