In September 2022 I was on a PressTrip to Plsen, and as part of that, we were given a tour of the Pilsner Urquell Brewery complex. 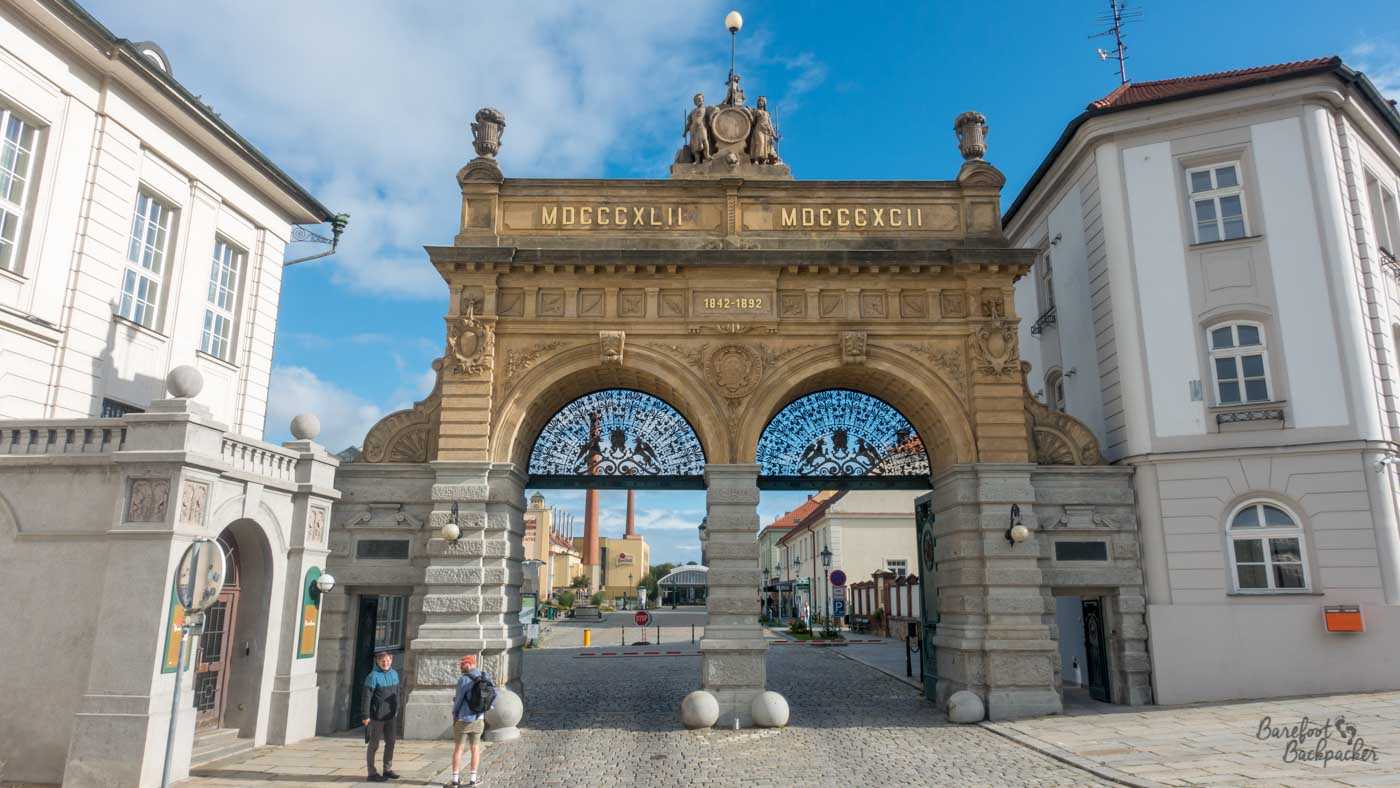 The main gate into the Pilsner Urquell complex

Pilsner Urquell is the major producer of Pilsner-style beer and, as you might expect, the brewery is huge. Some 11 million hectolitres are brewed per year & they can package up 120,000 litres in bottles, 60,000 cans, *and* 18,000 larger (1.5l, kind of ‘growler-sized) bottles. Per hour. The whole factory vibes like a small town. There’s a reason the tour of the Pilsner Urquell complex takes a couple of hours. 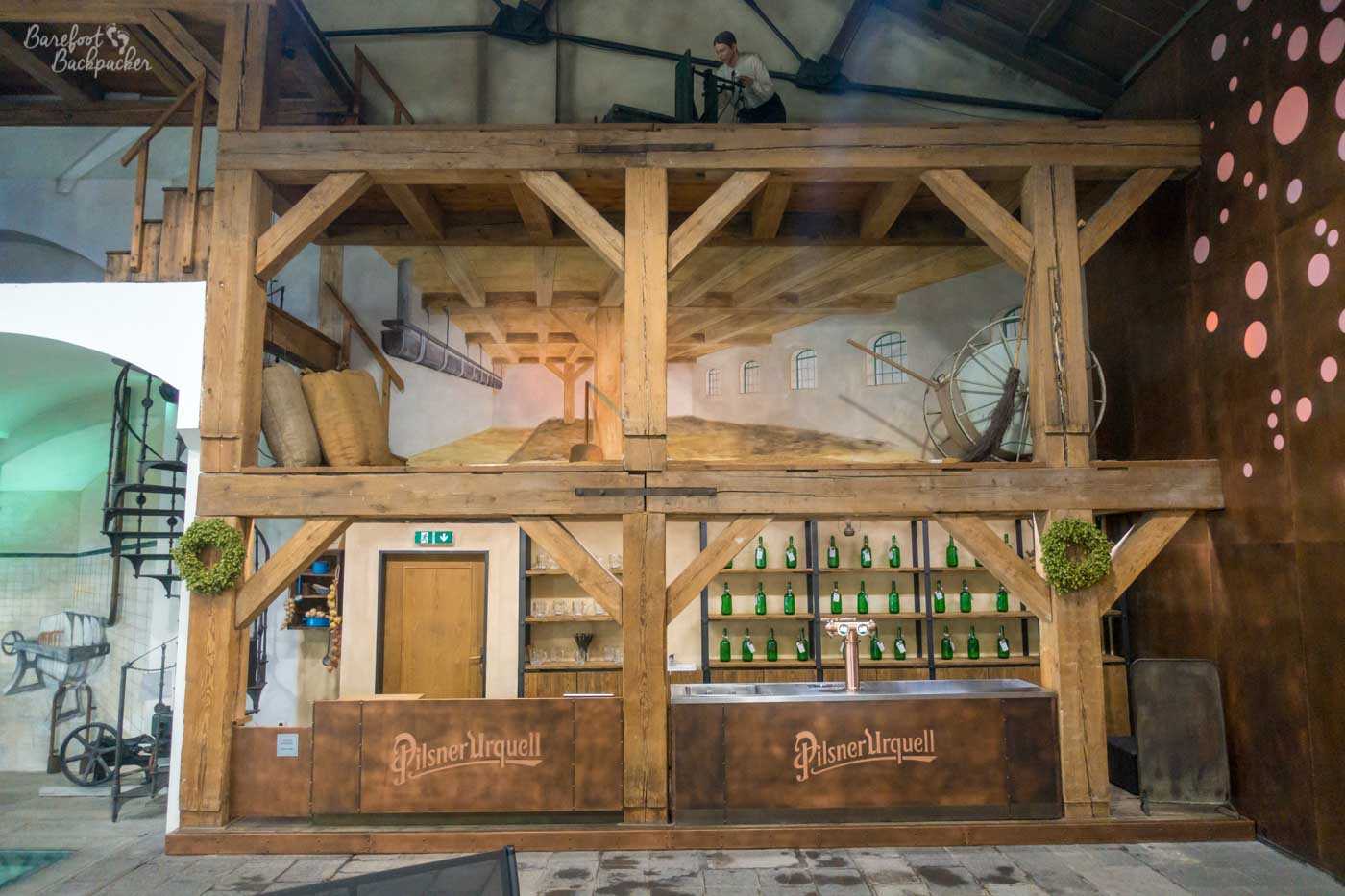 Part of the reception area of the factory

The tour begins in the main reception area, some of which is decorated in the style of a traditional old-fashioned public house. It’s only a façade, but later on in the tour you do get to sample the beer. Obviously. Because what would be the point of going to a brewery and coming out dry. Also in the reception area is a motorbike, with Pilsner decals, which was designed locally and is very bespoke. It’s one of two designed in the style of Pilsner Urquell beer, and they’re both fully functional. Perfect for those beer-loving bikers amongst you. Also in the area are a cabinet of awards the beer has won, as well as some of the original paperwork from the foundation of the brewery itself. 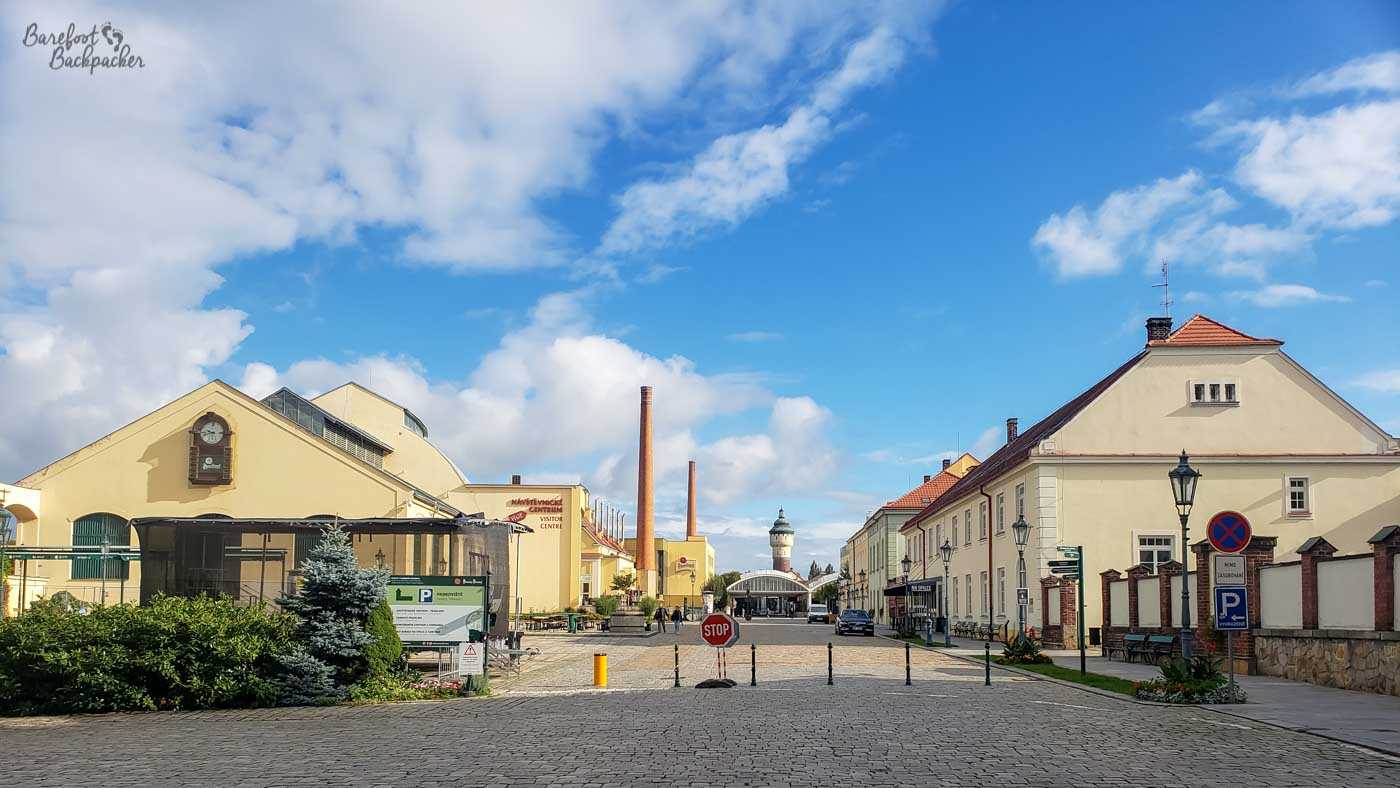 A cobblestone road leads through the gate and deeper into the brewery complex. This passes the original brewery building and the 50m tall water tower, built at the start of the 20th century to provide water to the expanding business. The base of the water tower, incidentally, is seen in the underground caverns. Or at least I think it’s the same one. It’s hard to judge when you’re a couple of meters underground. Also outside are a couple of rail sidings with old wagons, branded and originally used to transport Pilsner products around the city and beyond. 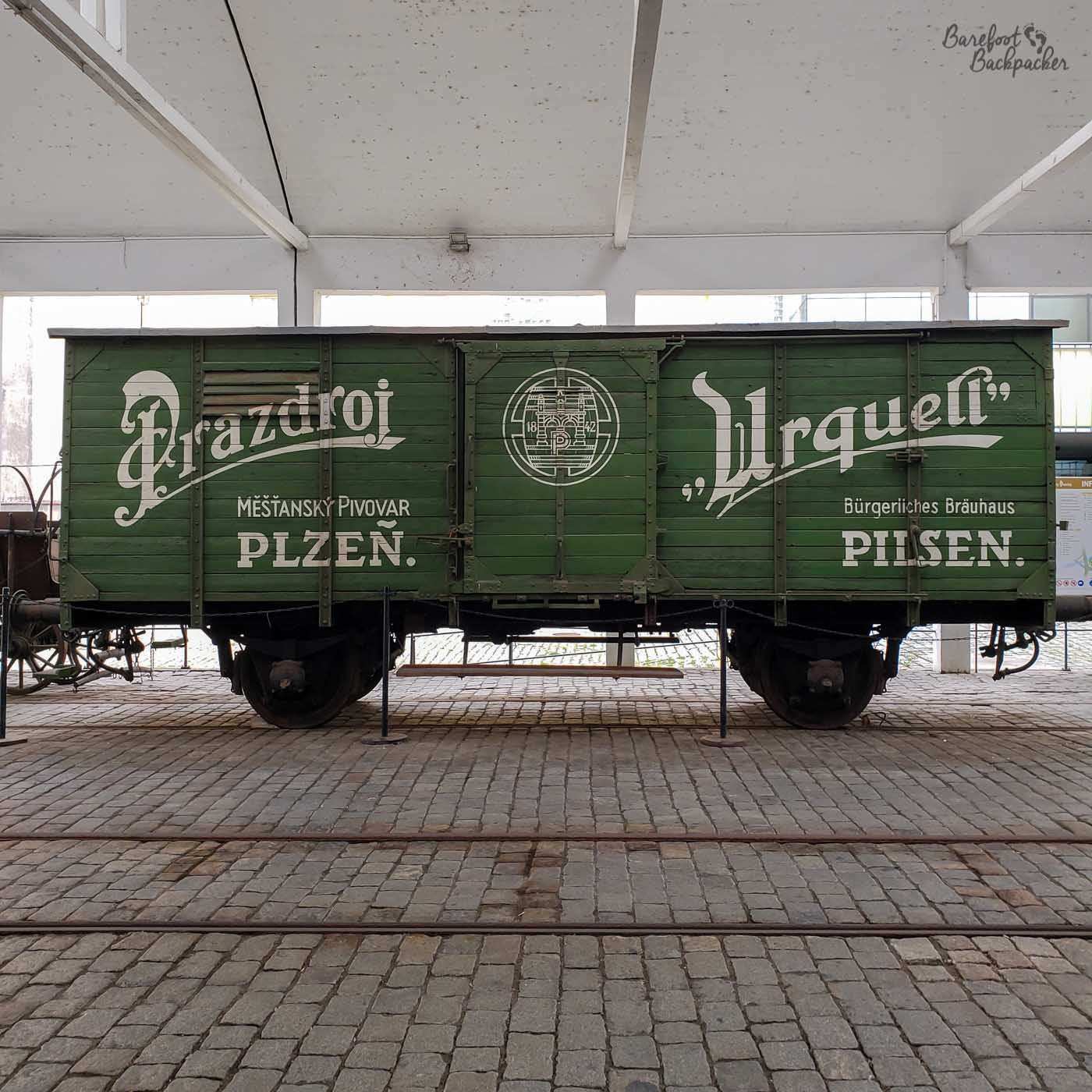 One of the old rail wagons

Back inside takes you past the raw ingredients for beer; the malted barley, hops, and yeast which when combined with water make the beer. They’re all regionally grown, from this side of Czechia, and the volume and type are particular to Pilsner Urquell. The yeast in particular is specially protected – samples are kept protected in temperature-controlled vials in several spots around the world. You can sample the malt and the hops if you like. The malt has the vibe and texture of muesli. The raw hops … the best way I can describe the taste is it’s a bit like chewing on a hemp bag. It’s dry, textured, stringy, slightly limp, and takes about 10 minutes to get the taste out of your mouth. I’d not recommend it. 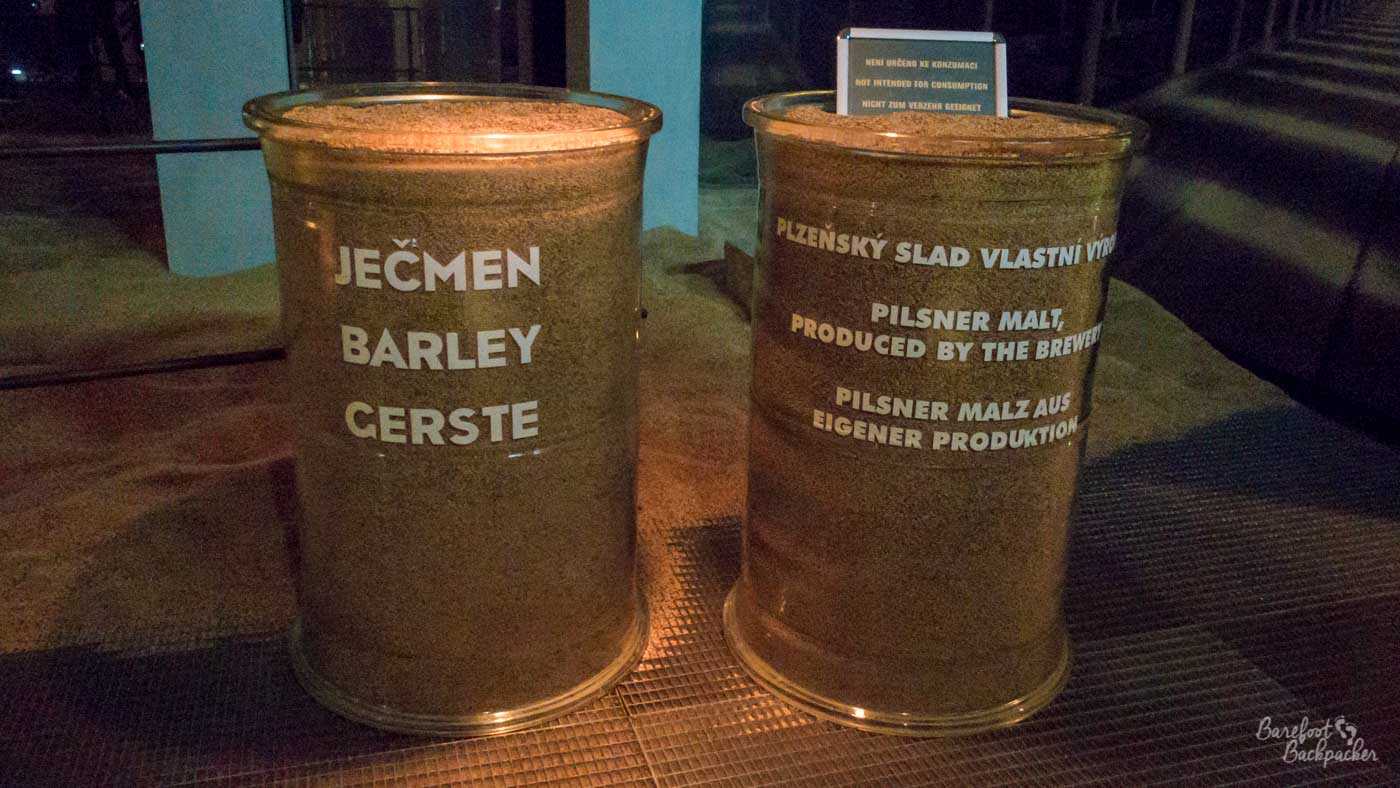 Containers full of the Pilsner Malts used for brewing

Then you go through the brewhouses. In 2004 they moved their brewing operation into a new larger building, however the actual setup is pretty much identical. The brewhouse consists of a series of copper kettles and mash tuns. This is where the malts are mixed with boiling water and, well, the phrase is ‘mashed’. To be honest this is also what happens to you if you drink too much of it at once. Essentially it breaks out the sugars in the malted barley which later go on to ferment into alcohol. In fact, Pilsner Urquell do a process called ‘triple mashing’. This means any batch of proto-beer goes through this process three times. I believe this makes the beer darker, slightly stronger, more bitter, and smoother in the mouth. Most breweries don’t do this, but then most breweries don’t have a huge setup and less time pressure that allows it. 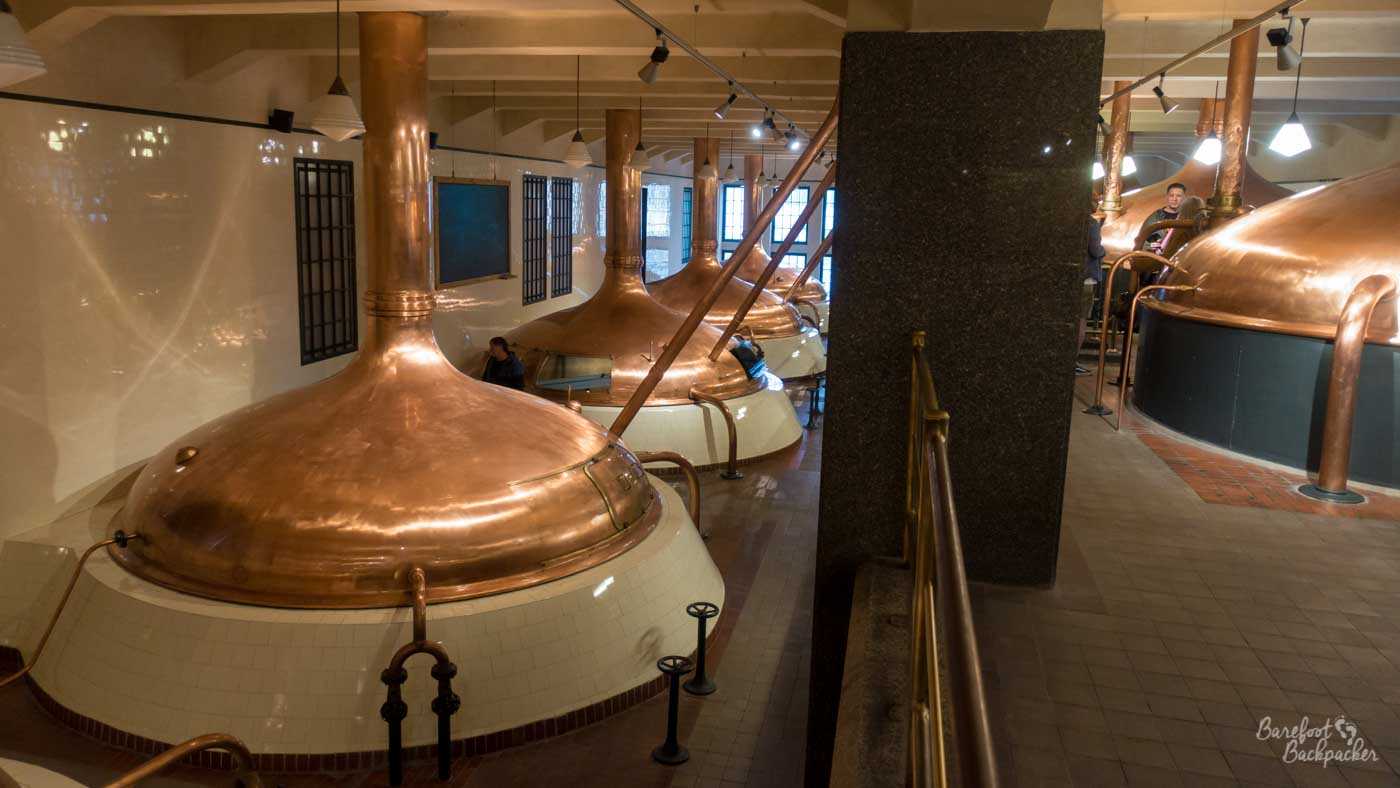 The copper kettles in the old brewhouse

The copper kettles, due to their size, number and their look (they have pipes going off into the ceiling, and their lids are rounded and smooth), have a vibe. It a little like you’re surrounded by sleeping creatures from a dodgy 1970s sci-fi series. When I stood next to them, the top of the lid was above head-height, and I’m not exactly a small enby. They’re pretty much circular so they’re just as big all the way around. 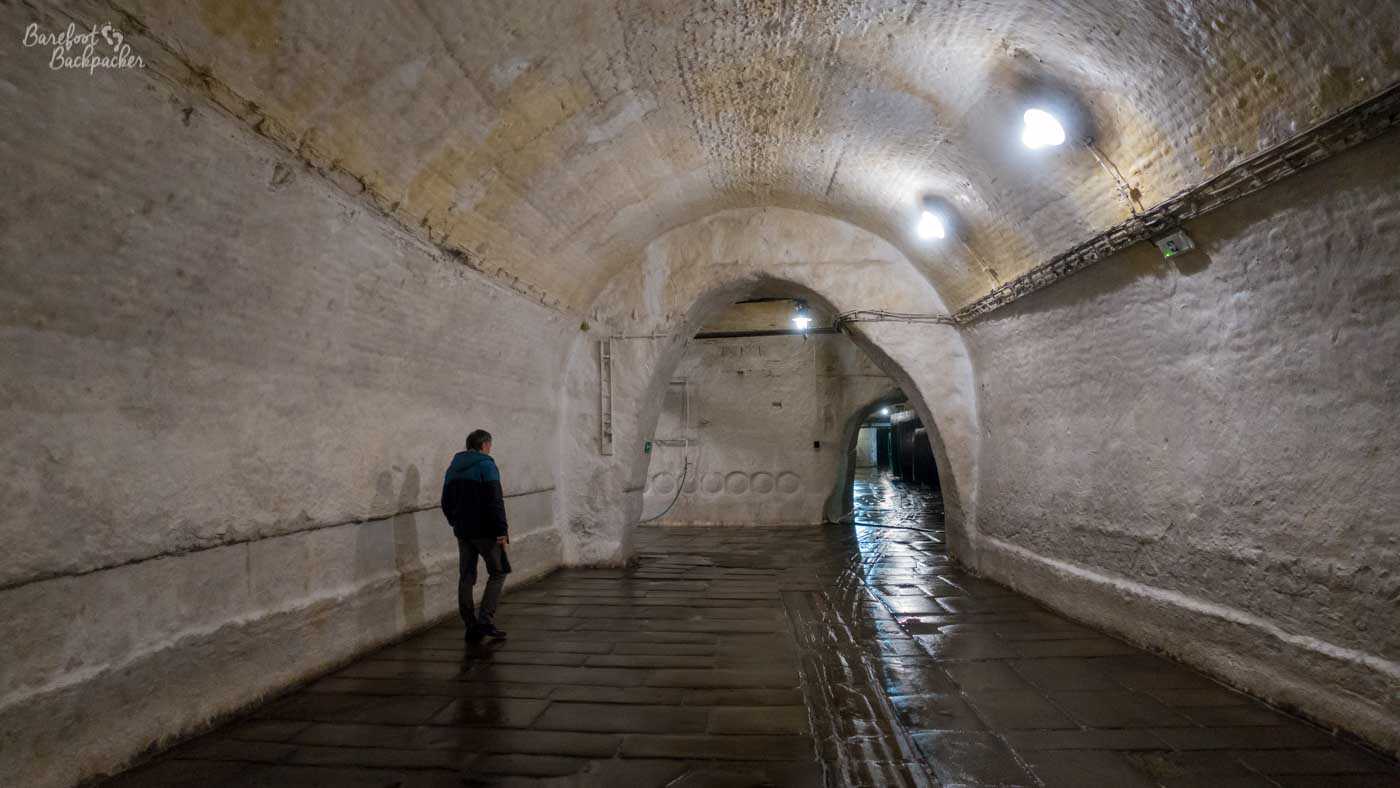 One of the underground passages where they stored beer. Note how damp the floor is.

After passing exhibits on the people who made the beer what it is today, including portraits of all the head brewers from 1842, the tour goes underground into the beer cellars. This is where the fun begins. The passages stretch in total for around 9km and lie around 15-20m under the town, though obviously you only see a small section on the tour. The passageways themselves are quite wide. This makes sense as they were used to store beer barrels in cold conditions to let the beer mature and condition. This was done through not just the fact the cellars were naturally cool anyway, but also with the addition of large blocks of ice. These days their usual production is instead held in large cryo-tanks, but even so the passageways still smell of damp and the sound of dripping and running water is never too far away. 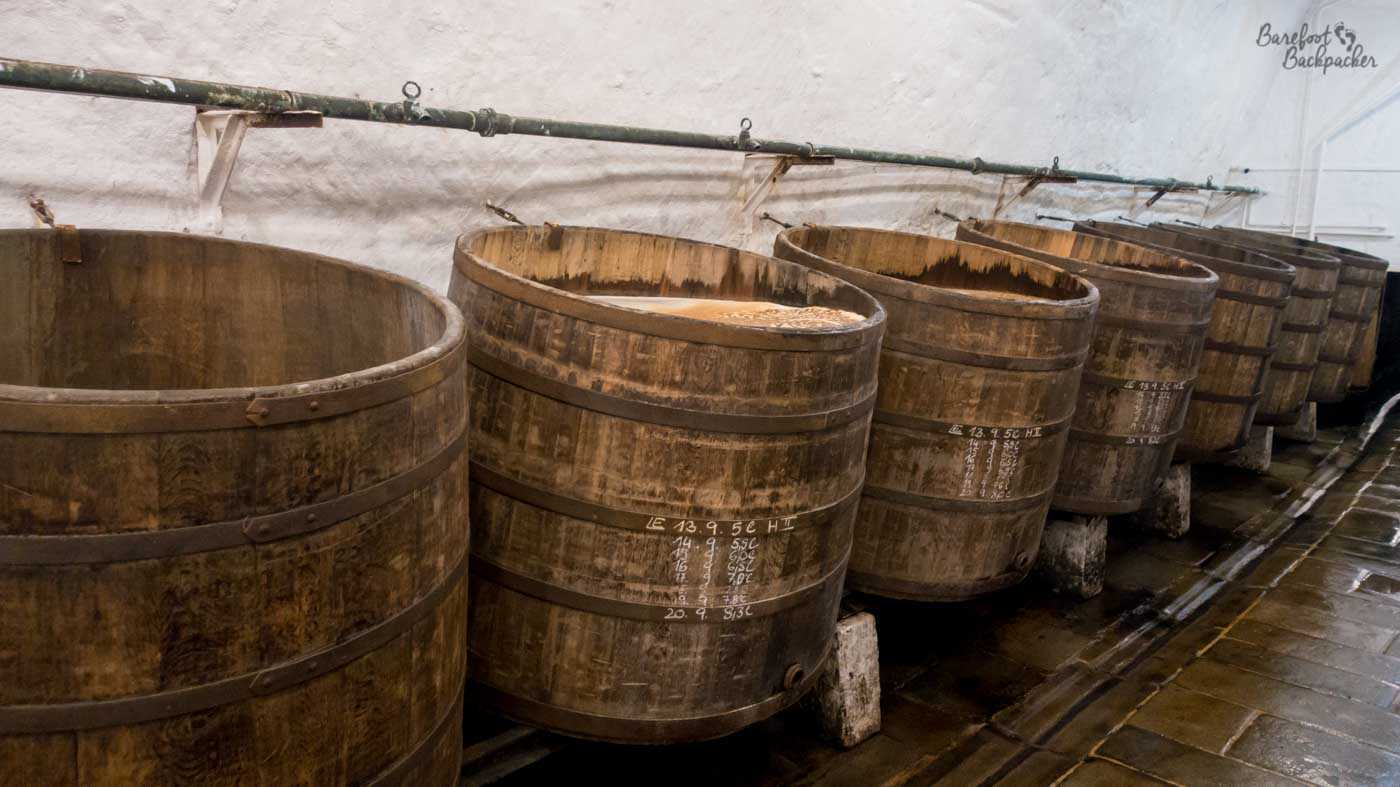 I say their usual production. Down here in the cellars they still maintain some huge oak barrels for the original fermentation process. Partly this is done for the tourists, but mainly it’s done for comparison purposes. They want to make sure that regardless of what changes they make to the production of beer in the factory, the beer itself tastes the same as it always has done. Thus by continuing small batch production of beer in the traditional way, and because they use the same makeup of malts, hops, and yeast for both, they can easily tell if something they’ve done process-wise has affected their beer. 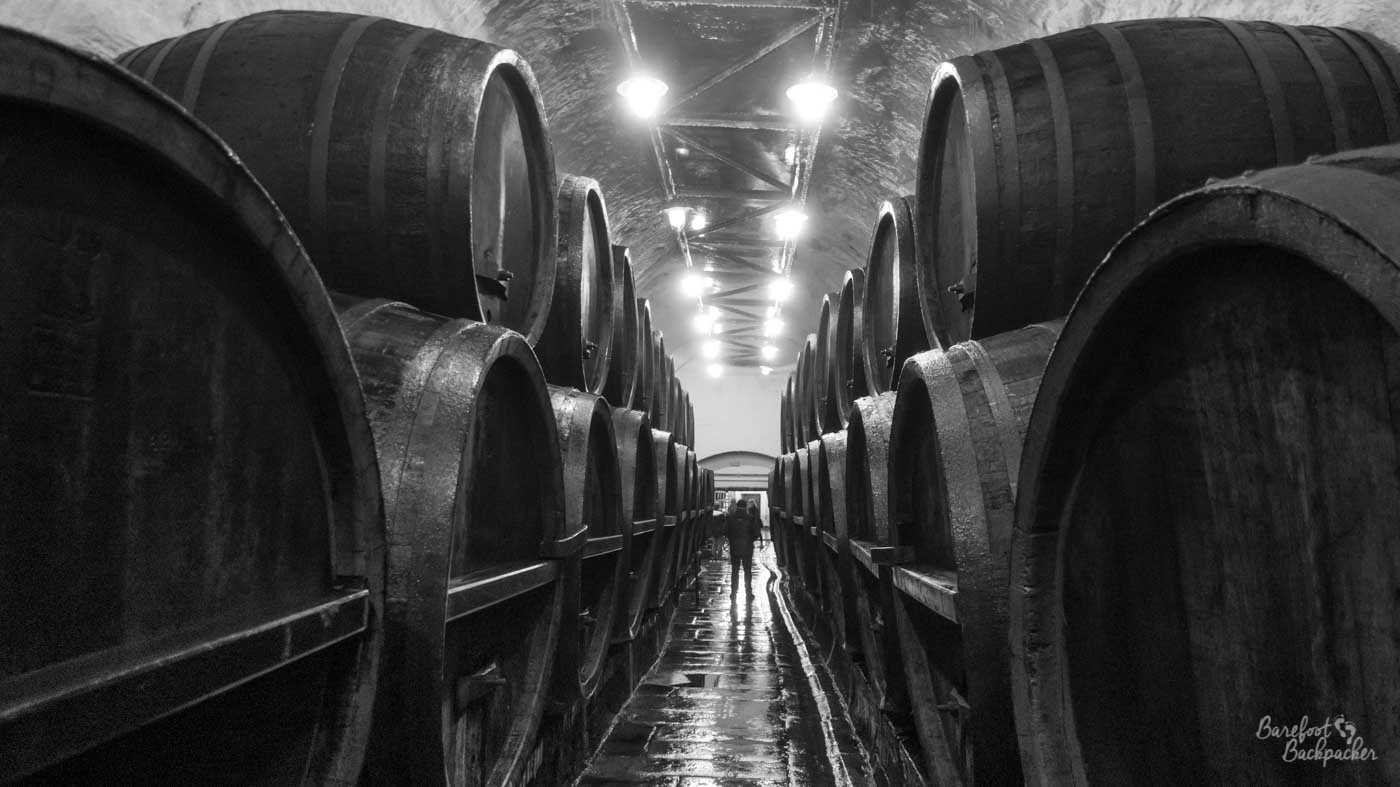 Beer ready to be tapped, mostly

And of course one of the highlights of the tour is at the very end. You can sit at a table in the cellars and drink pretty much straight from the tap. Traditional, unfiltered, unpasteurised, Pilsner Urquell exactly the way it would have tasted when the brewery first produced it in 1842. And it’s pretty good too. I’m not a lager drinker but this was lush. Very smooth, sweetly caramel, very bitter, and refreshing. Completely unlike … other lagers I could mention, but won’t. 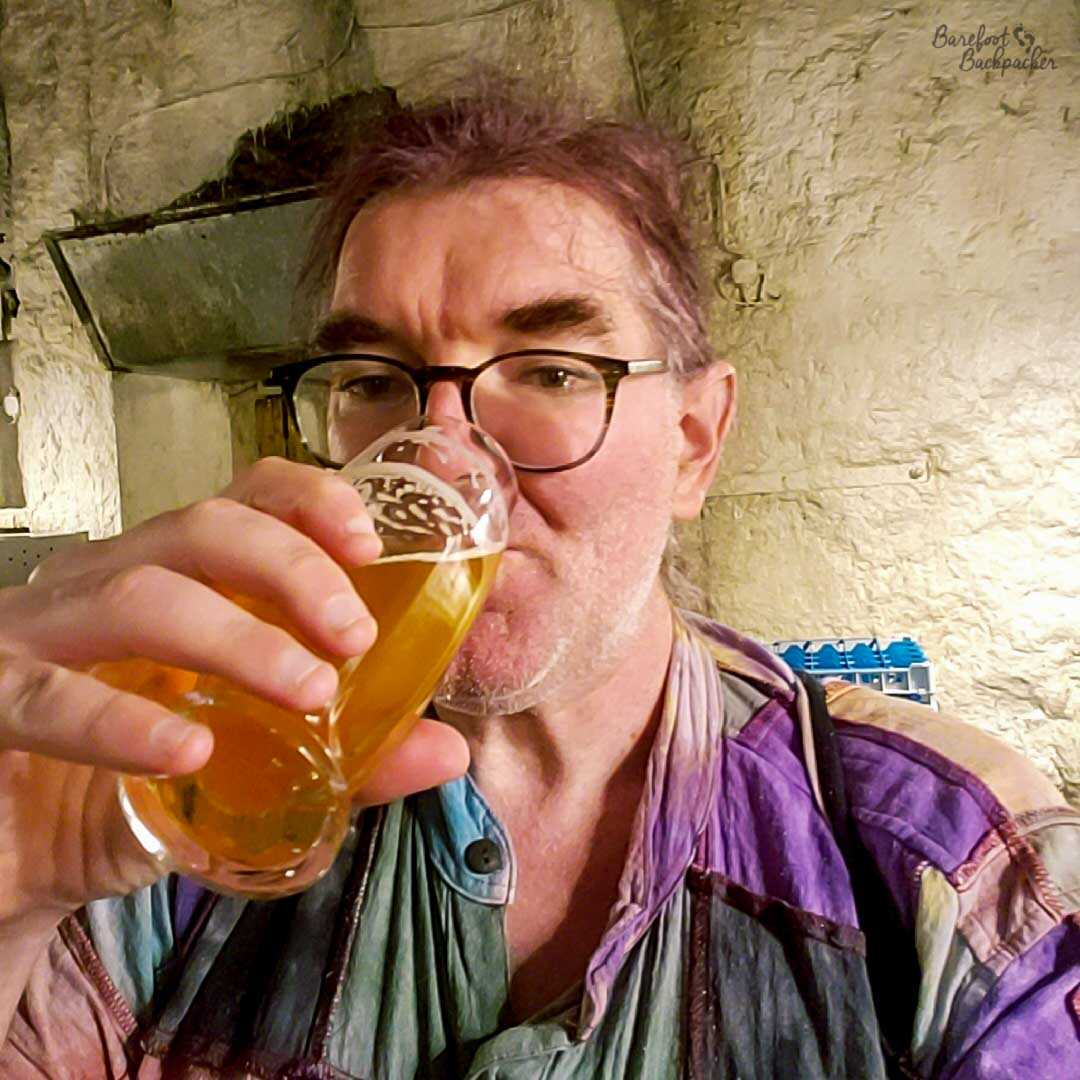 Incidentally, Pilsner Urquell are one of the few breweries left in Europe who make oak barrels by hand in the traditional manner. This is one of those trade secrets passed down from master to apprentice. Currently they employ 8 barrel manufacturers, or coopers, and yes that is the origin of the surname. The barrels they make range from 17 litres for transportation to 4600 litres for storage. The latter can weigh up to 800kg, making them rather awkward for taking home with you. 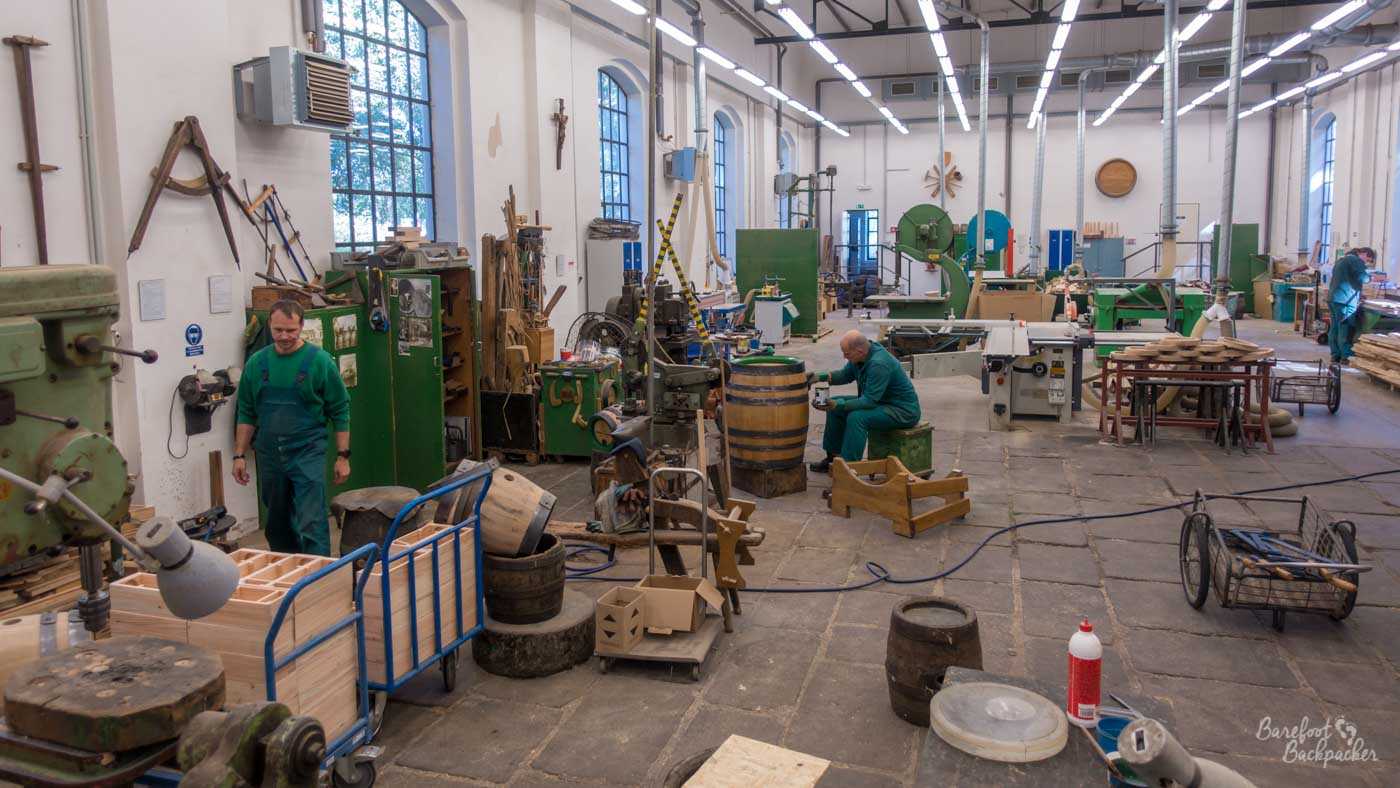 The cooperage at Pilsner Urquell

I found the tour of Pilsner Urquell to be very interesting, especially as Pilsner itself is a style of beer I’ve always kind of shied away from. Also, most of the breweries I’ve visited have been quite small microbreweries, so it was useful to compare and contrast with something much bigger. Has that whet your appetite? Why not pop along yourself and find out? And for more information about my Press Trip, you can listen to my podcast episode all about it.