Flanders. And no, nothing to do with Ned.
I’m sure you’ve all been subjected to the poem at school: “In Flanders fields the poppies blow / Between the crosses, row on row” etc. Now obviously there’s more to this part of Belgium than just its WW1 history, however it’s one of the reasons I came to Belgium in the first place. The other main one was beer, yes …

Like the poem, Flanders is fairly flat. I’m sure there’s a quote in ‘Asterix in Belgium’ that “The only hills are called ‘oppidums’” (towns) – it’s more accurate to say the only hills are railway embankments. While this means the trains and buses super-speed through it, there isn’t really a lot to look at. Unless you like fields. Punctuated by small villages. Which were kind of pretty to look at as I passed through them on a day trip from Bruges.

Zonnebeke is one such village, however one with a troubled past. Not only was it virtually wiped out during fighting in the war, the battles fought here were named after the nearby village of Passendale; as an aside, in modern times Passendale is famous itself for cheese-making, although even that industry is based also nearer Zonnebeke. 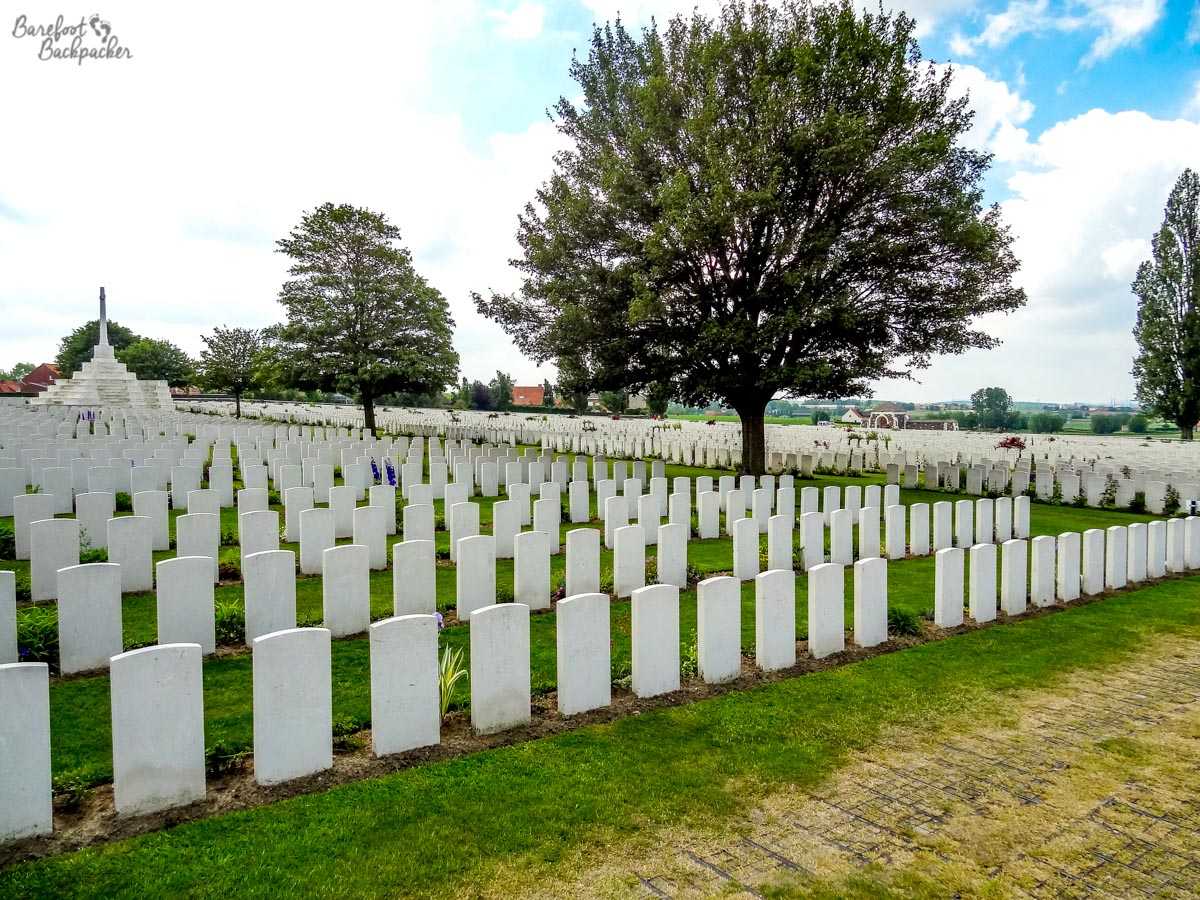 Hundreds of rows of graves, glimmering in the sun.

Just outside Zonnebeke, in a field just off the main road, and up a “hill” (marginal slight incline!), is the Tyne Cot Cemetery. Some 12,000 white markers in (mostly) regimented lines standing stiff above the green grass, stark against the blue sky and firm against the slight breeze. Each one marking the last resting place of a young soldier who fell fighting at a time when the ground was brown and thick with mud, and the sky was punctuated with the incessant sound and sight of artillery flying overhead. From both sides. 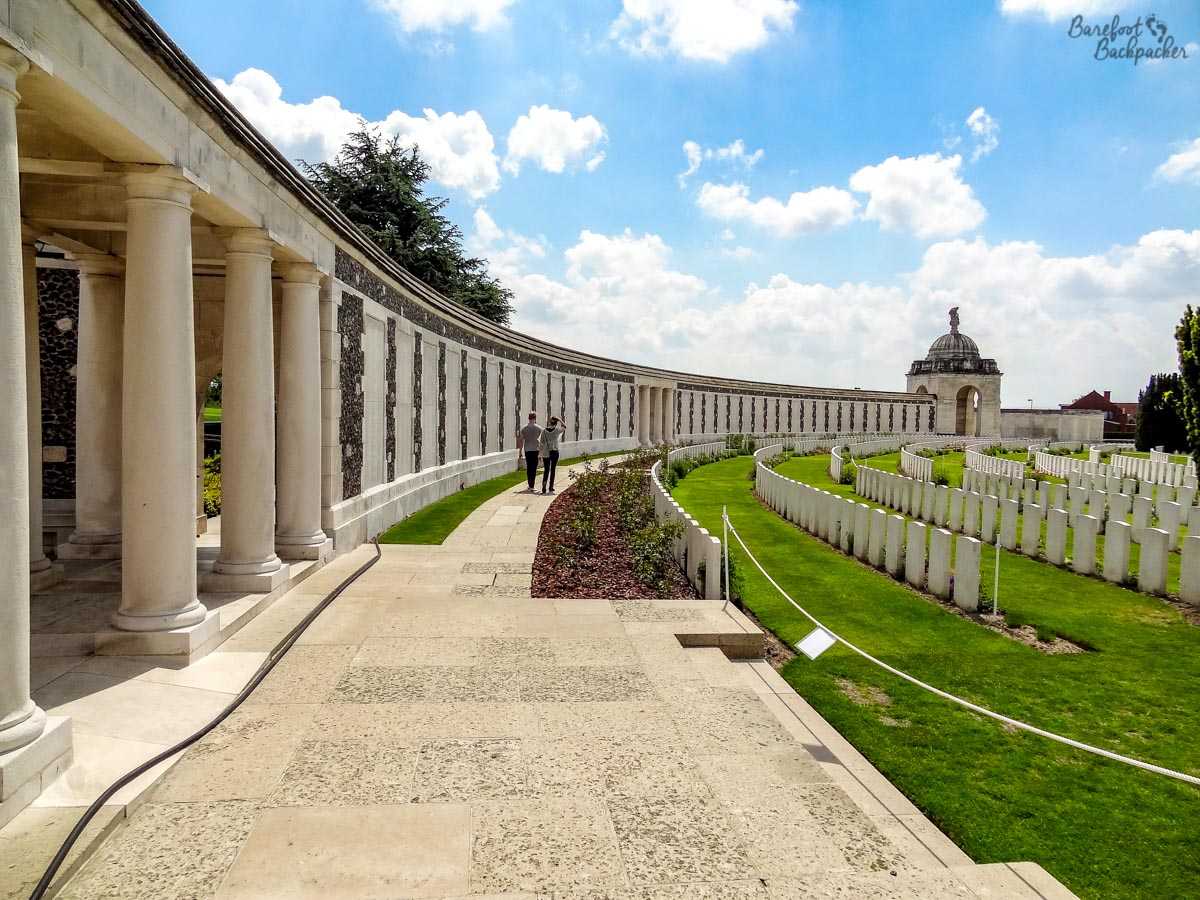 The wall that lists the names of the dead.

Just under 12,000 graves. And these are where the bodies could be found. Around the far side of the cemetery is a semi-circular wall that lists, by regiment, just under 35,000 names of people who died in action and whose bodies couldn’t be found. What makes this even more incredible is that these 35,000 names are actually the ‘leftovers’ – the ones that couldn’t fit on the Menin Gate in central Ypres (just under 55,000). So that’s 102,000 remembrances 102,000 soldiers who never came back. On walking towards the small visitor centre at the entrance, a clear female voice reads out simply the names and ages of those who lie here. Chilling. 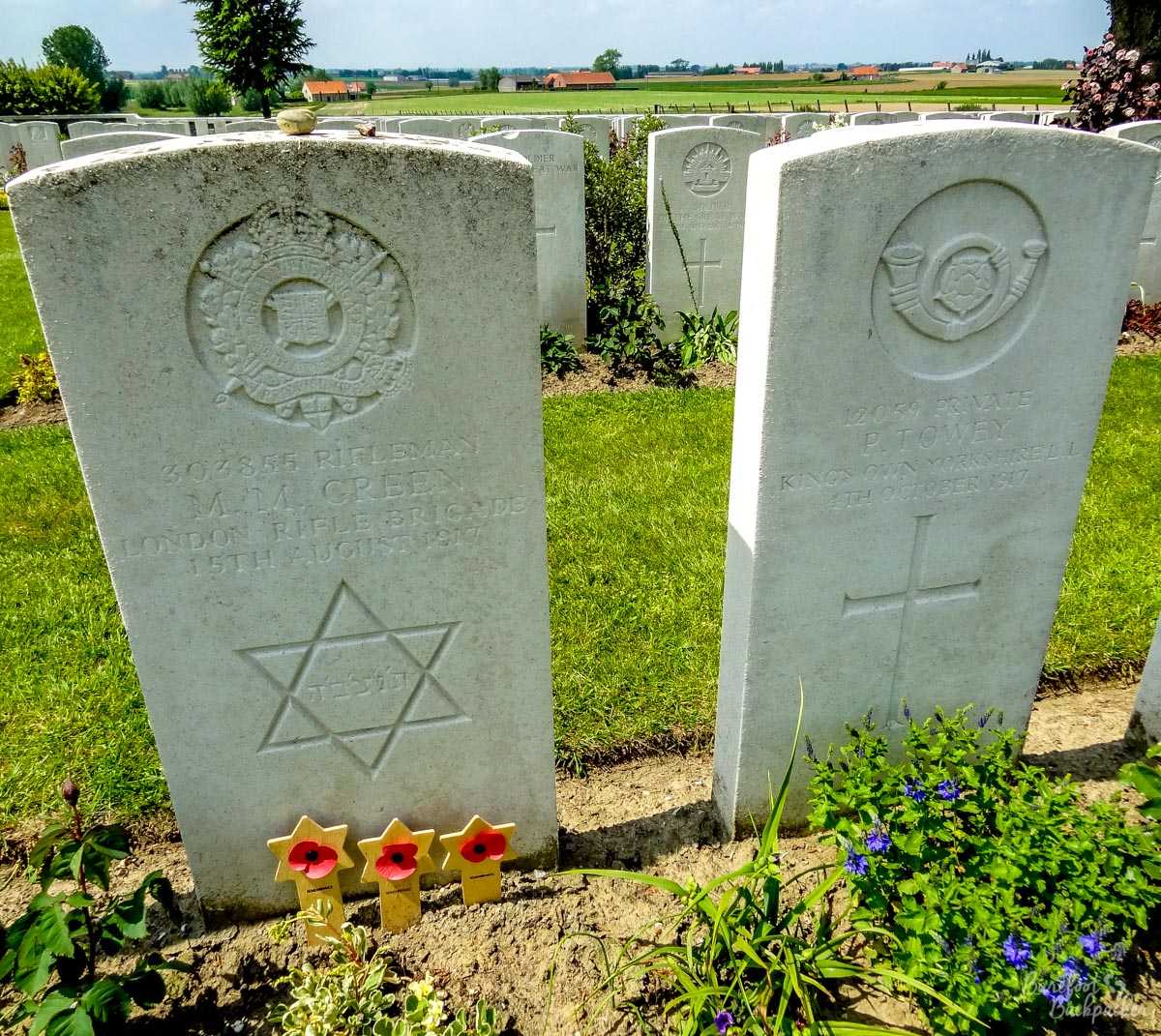 World War 1 did not discriminate; all fought, all died.

Now consider this: This is *only* the British and (some) Commonwealth troops. New Zealand, Australia, Canada, France, etc have their own memorials to the fallen. Tyne Cot is not the only cemetery – a few miles North West (though I didn’t get there), in the village of Langemark, is the equivalent German cemetery, with over 40,000 bodies interred. And smaller cemeteries are dotted around all over the area; more than a handful are passed by the bus between Tyne Cot and Ypres alone. Some of them are quite small, some of them are reasonably large, but all of them are the same; reflective places on the strange things that humans will make other humans do in the name of a Greater Good 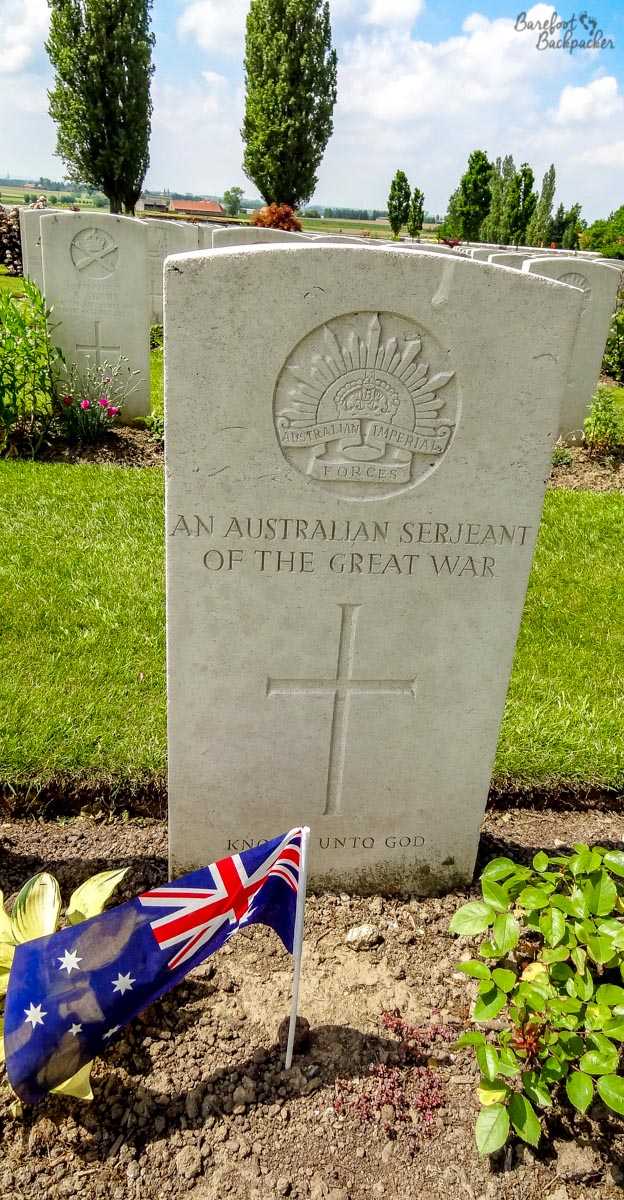 Some people couldn’t be identified. Unknown soldiers, still buried in line with everyone else.

[Historical note : fighting was so fierce here in World War I because of the strategic importance of the Ypres area. Close to a couple of important railway supply lines, and, because much of the rest of this part of Northern Europe is flat, contains some important higher ground. If the Germans could get through here, there’d be nothing stopping them reaching Calais. If the Allies break through, then they could easily march on Brussels and into Germany beyond. Neither side could and, following initial fighting in late 1914, the front line didn’t move more than a few hundred meters for most of the next four years.] 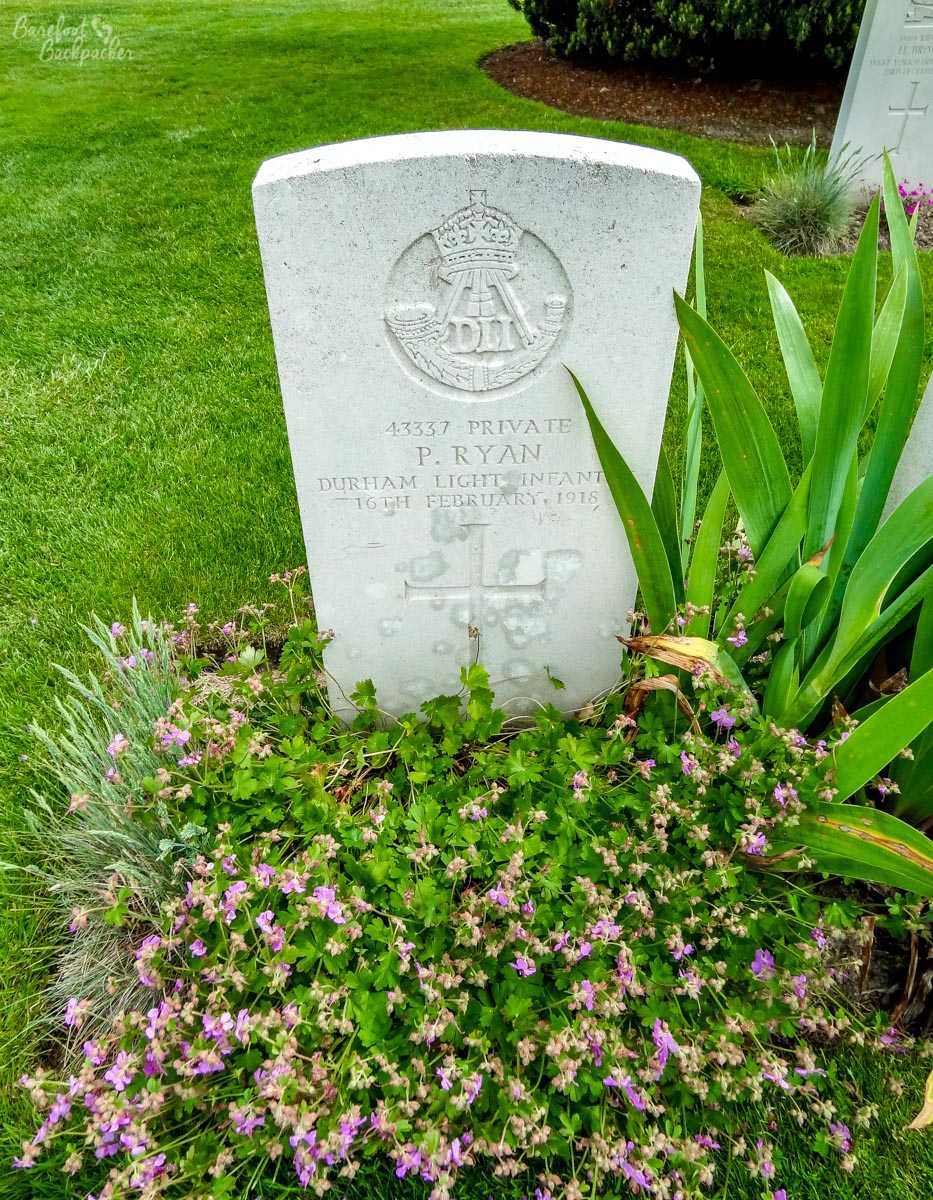 I came across this accidentally. I mean, I know it’s 27 years too early, but still…

In the town centre itself is the “Passchendaele 1917” Museum. It’s an interesting place; the main exhibits are a collection of items and lots of information (including newspaper cuttings from all countries involved) all about World War I in general and the battles around Ypres in particular. What’s most interesting was going down some steep stairs into a full recreation of life in a trench, including seeing the sleeping quarters, medical rooms, etc, all the time with a background soundtrack of shelling. The roof’s a bit low so someone like me would have had some trouble being there for any lengthy period of time. 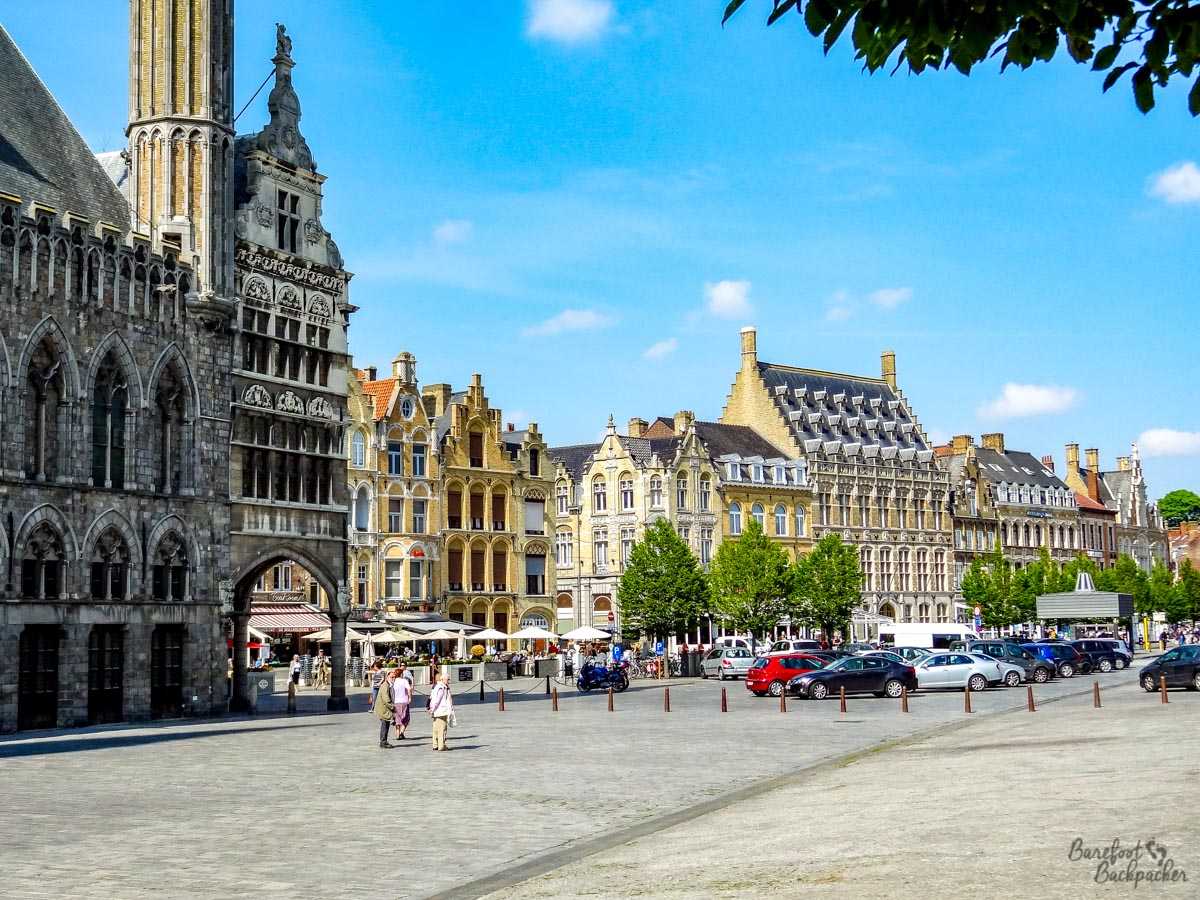 Ypres itself is a fair-sized market town, with a large main square that to my eyes looks like it just stepped out of a foreign language textbook; it looks like the sort of place you’d expect to read about the café and shopping adventures of Maarten and Ineke. Around much of the edge of the town centre are the remains of fortifications – some dating back to the 14th Century – and it’s possible to take a leisurely stroll around them.

The main entryway into the town from the East is the aforementioned Menin Gate. Not only does this mark the point where the road crosses the fortifications, it’s also the main war memorial, not just in Ypres but arguably in the whole of Europe. There’s been a gate here for pretty much the history of the town, however following the end of the war, it was decided to rebuild it as a mark of respect to those who died – this particular site was chosen because it was often the last place soldiers passed through before fighting. 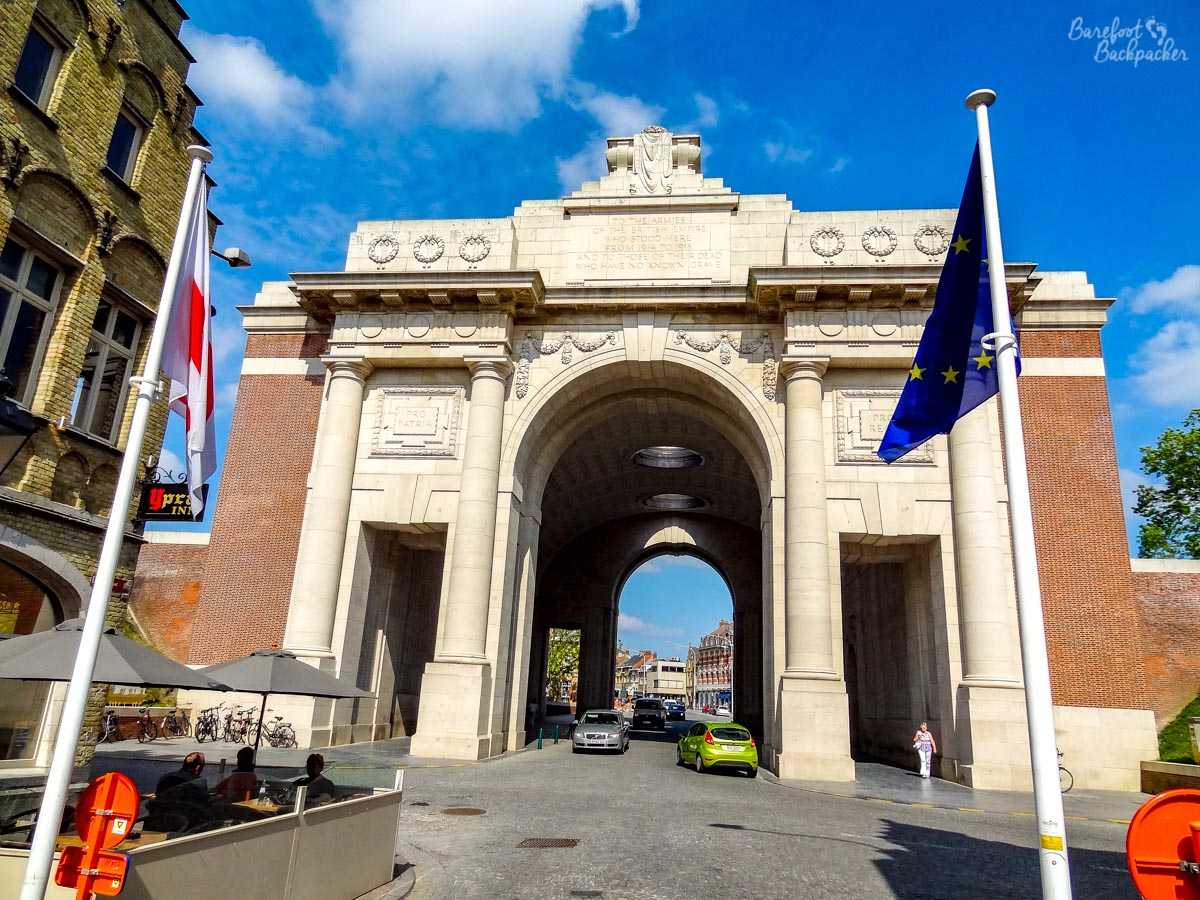 The Menin Gate, looking out from the town.

It’s quite a simple structure – a marble arch lined on virtually all sides with what feels like an endless list of names. These 55,000 people are all those Commonwealth soldiers who were believed to have died in battle around Ypres & Passendale, and whose bodies were never found. It’s quite chilling to know that the list is regularly updated – as building work takes place in the countryside, remains are regularly found, and if these remains can be positively identified, they’re given an official burial and the name is removed from the Menin Gate memorial. 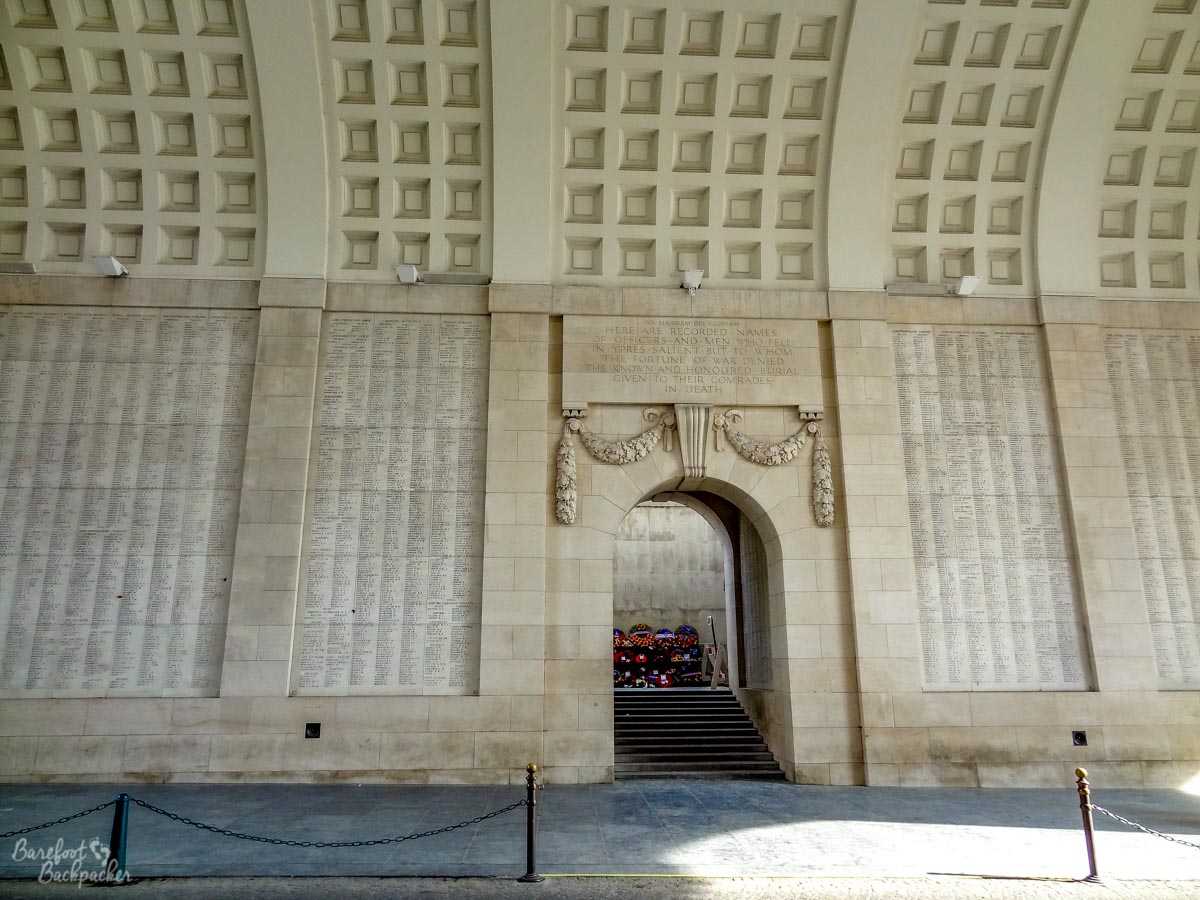 Underneath the main arch of the Menin Gate; all the names.

The gate is also the scene of a ceremony that has taken place at 8pm every day since the gate was inaugurated in July 1927 – during the time of German occupation in WW2 the ceremony took place in England but returned to Ypres the moment the gate itself was liberated, despite fighting still taking place elsewhere in the town. The road under the gate is closed off, and traffic waits. There is deathly silence, until broken by a band of buglers who play ‘The Last Post’. After this, invited people from over the world place memorial wreaths in a certain part of the arch (you can book this in advance – when I was there it seemed to be mainly some children from several British schools). Once laid, the buglers play the ‘Reveille’ before everyone departs and they re-open the road. 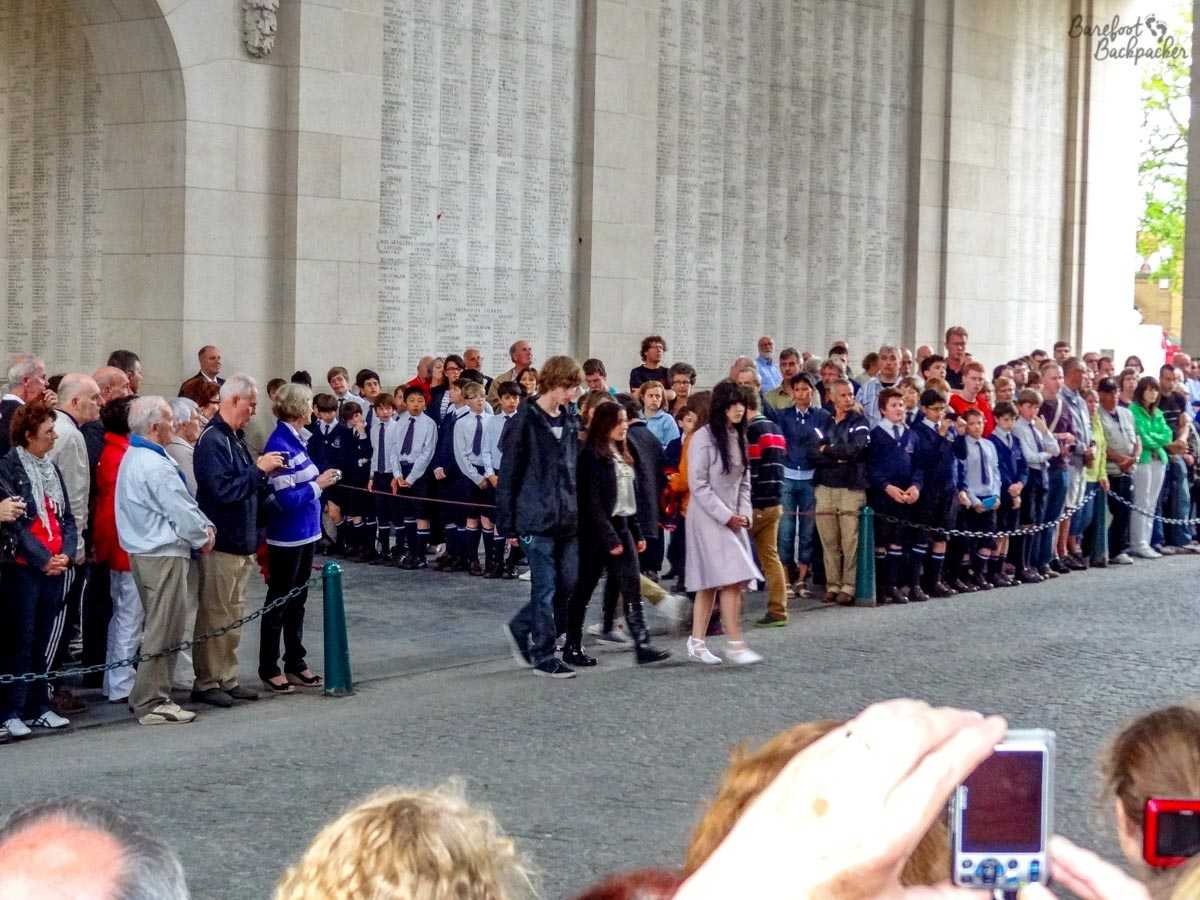 At the 8pm ceremony; people just having laid a wreath.

There’s often a big crowd to watch this, who are respectful throughout. The whole scene is very moving – I think a lot of people watch precisely because it’s a tourist attraction now rather than primarily to remember the dead, but it’s still very respectful nevertheless. 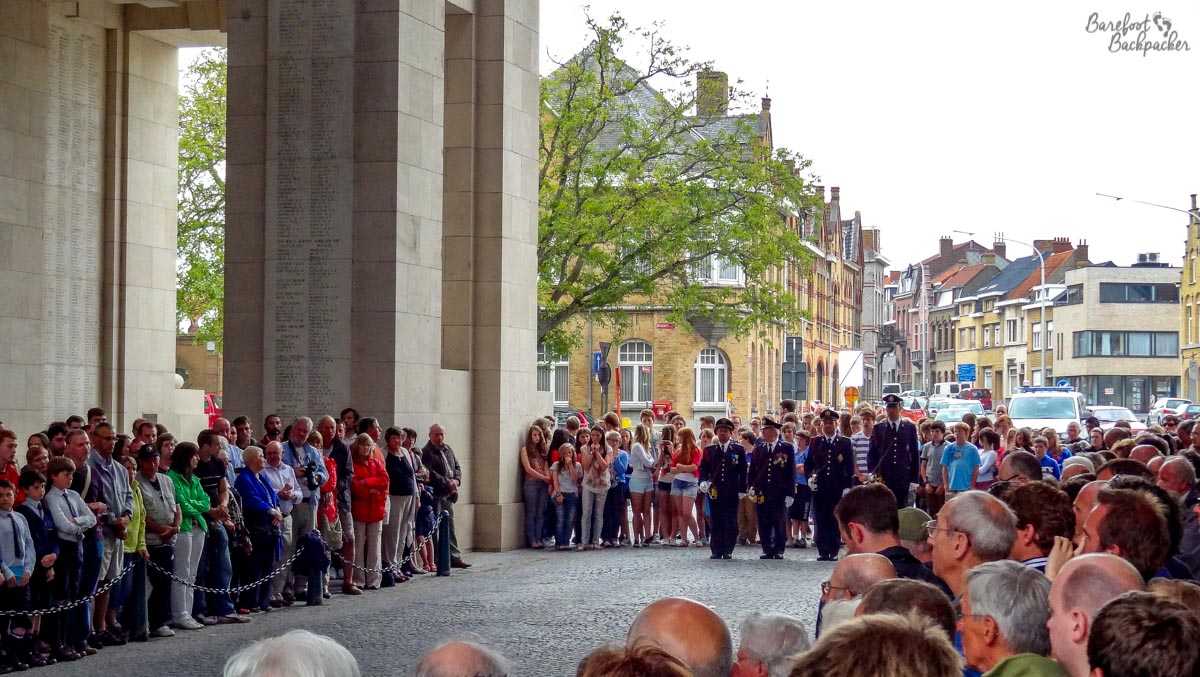 The crowd at the 8pm ceremony.

And you know, I never saw a poppy growing in any of the Flanders fields.