Belgium is a very odd, quirky, ‘off-the-wall’ country. The whole place has the feel of several completely disparate concepts stuck together with supermarket own-brand duct tape; it all fits together but I’m not entirely sure how. This is, after all, a country which holds the record for the longest period of time without a functioning government (541 days in the early 2010s, over twice as long as the previous holder, Iraq), primarily due to disagreements over language rights for a small area around Brussels.

There are two main areas in Belgium – Flanders in the North (including towns like Bruges, Antwerp, and Ghent), which is Dutch (Flemish)-speaking, and Wallonia in the South which is French-Speaking (towns like Liege, Charleroi, and Namur). Brussels is in the middle, technically both (but majority French) despite being entirely surrounded by Flanders. Officially the country is ‘trilingual’ in that it has three main official languages (Dutch, French, and German, though the small number of German speakers in the East always get a bit left out of these discussions); that doesn’t mean everyone can speak three languages, only that they *could*. In practice, most people in Flanders speak two (Dutch and, er, English), whilst those in Wallonia speak pretty much only French. 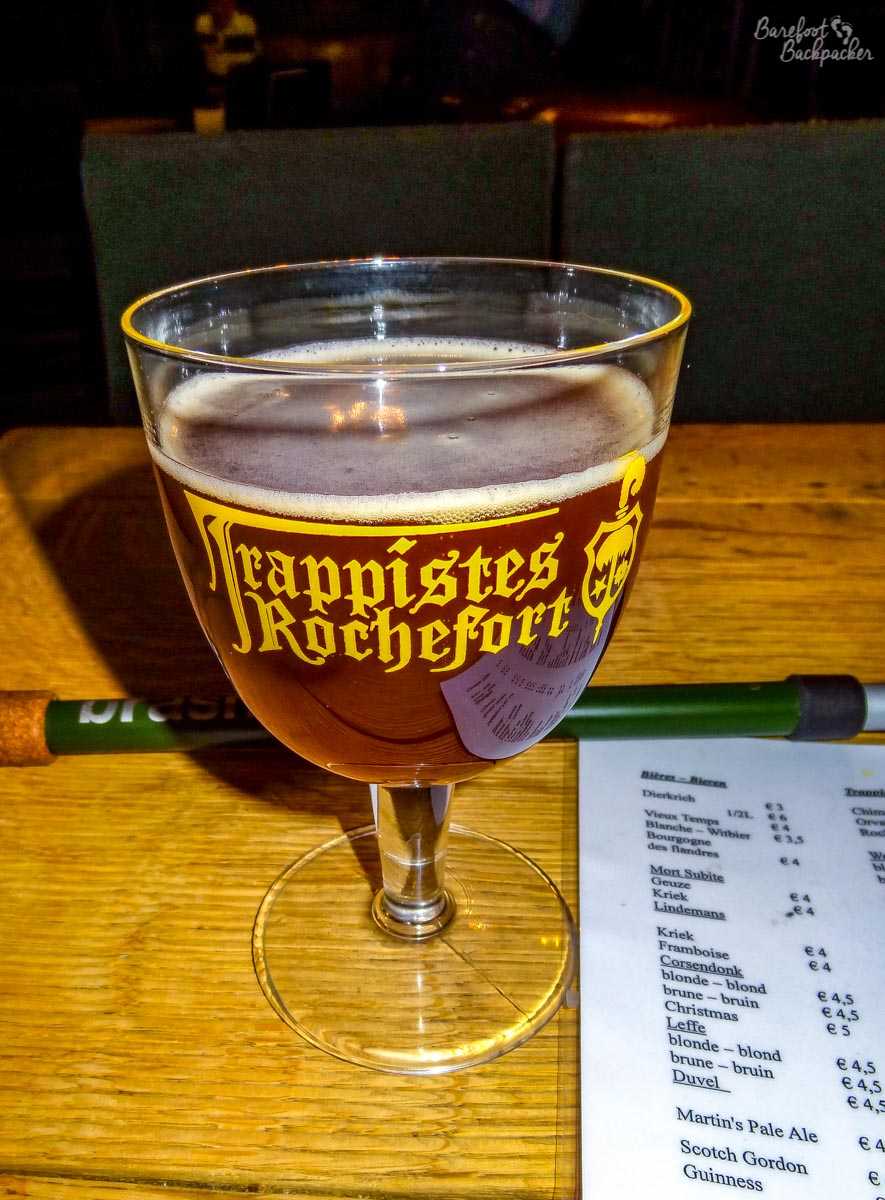 Let’s break up this monotonous historical context text with beer; I’m not quite sure which of the many beers I had this was, only that it probably wasn’t Westvleteren 12.

Due to its location and status as capital, Brussels feels like a distilled, concentrated example of this diversity. It merges the Dutch love of beer with the French love of cuisine; Dutch street vibes with French high fashion; Dutch quirky pastimes and museums with French fine arts. Walking the streets makes you feel like you’re in a slightly grittier, worn, suburb of Paris, yet you turn a corner and come face-to-face with something that could only have come out of the mind of a Northerner. 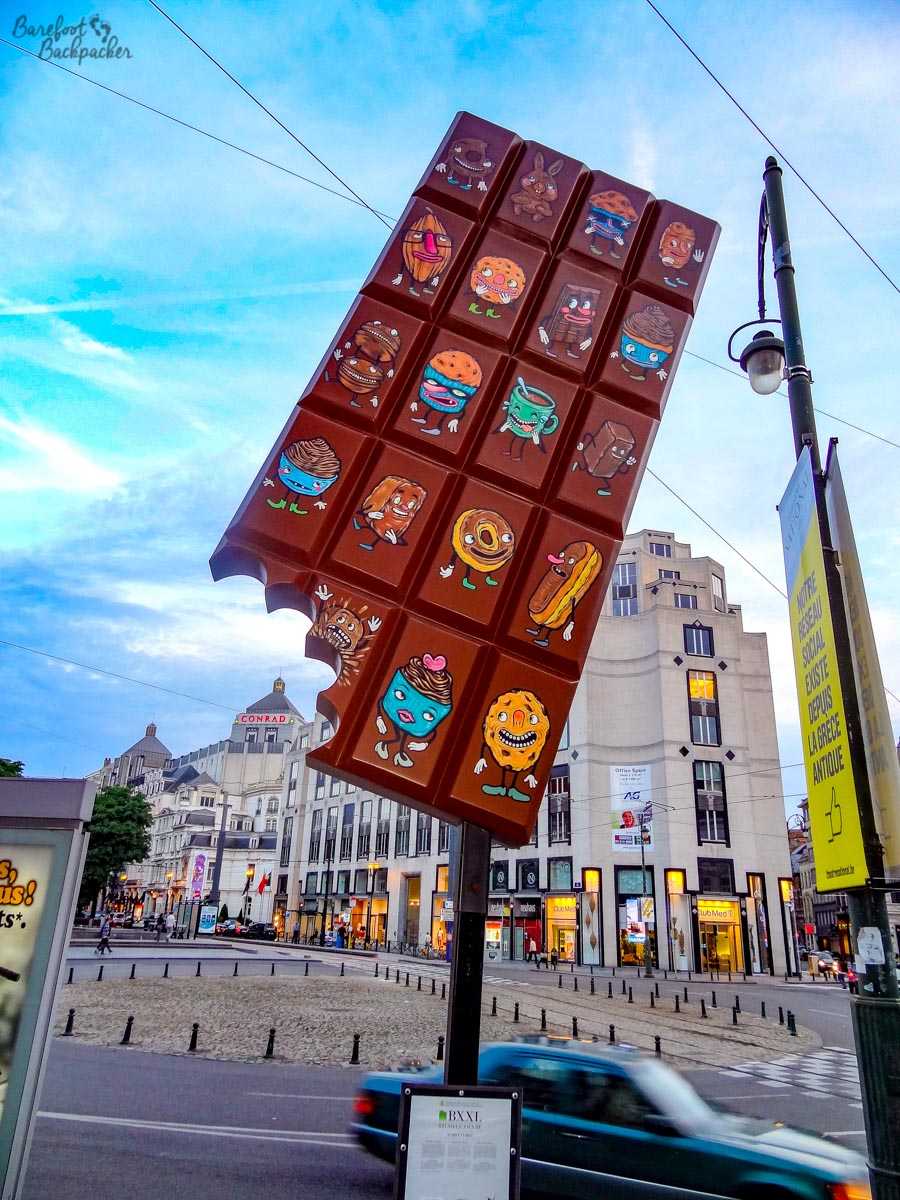 Nope, I have no idea. I think it’s advertising a chocolate shop, but who knows.

Some of this weird dichotomy reveals itself in its museums. Belgium is a country very fond of its art; but for every visit to the fine arts museum, one can also visit something a bit more, shall we say, ‘earthy’.
The Musée des Beaux Arts is a large art museum in Brussels – even the building its situated in strongly strikes of privilege and historical wealth. It contains a varied selection of the usual European Art style paintings, but with a definite concentration on Belgian artists (oh yes, Breugel. And Rubens); this is the backbone of art galleries worldwide and why I tend to avoid them. That said, it does tip a hat to more modernist art. Now, I really love Modern and Contemporary art, especially the sort of displays that make you stop, stare, and shout internally ‘what the fuck, why?’. Here, this is best exemplified by the Franco-Polish “painter” Roman Opalka, who had a whole room dedicated to him (that he had died within the previous 12 months of my visit possibly helped). His Magnum Opus, part of which is displayed in the museum, is a work that involved him painting consecutive numbers in white paint onto paper, from 1 to, well, infinity, where the background of each new sheet was 1% lighter than the previous. His aim was to reach white-on-white by 7.7 million; he reached a clearly visible 5607249 on his death, at which point everyone mused ‘well, that was worth it, wasn’t it’ … 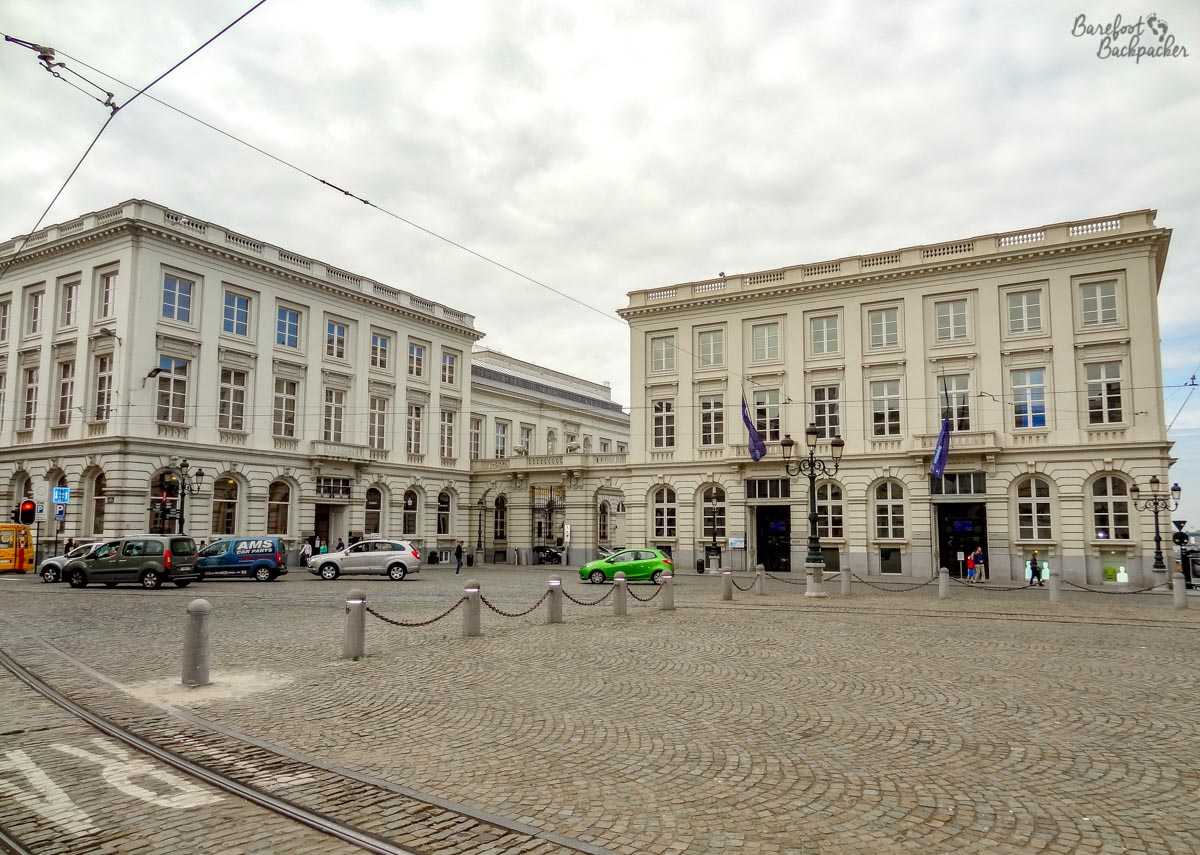 The two main art museums; the Magritte Museum is the one on the right

As a contrast – or maybe not, YMMV – connected to the Art Museum was the ‘Magritte Museum’. This, surprisingly, is a museum, which sounds like a weird thing to say, except that one of the pubs he used to frequent, and doodle on the tables while he drank, has the sign ‘this is not a museum’ on it. While this may be blindingly obvious, Magritte was a surrealist who liked to challenge perceptions and accepted norms, so sometimes you can never tell.
He’s one of the most famous and controversial artists that Belgium has produced, and the museum occupies several floors which take you through his the life and works in a very interesting and thorough manner. On the lift up, there is a kind of small window through which on every floor there is an image of a part of a naked woman (as if the woman is 5 storeys tall). Somewhat amusingly, when I was in the lift, we stopped on the third floor to let one of the staff members out. You might well be able to guess what the drawing was through the window. Remember, I said ‘naked’ … ! There was a small group of people in the lift who took the view the staff member had done this on purpose …

The other main art museum in Brussels is the Centre Belge de Bande Dessinée. This ‘museum’, built on several floors, displays extracts from all manner of cartoon strips, and has a very in-depth biographical section of many of the area’s most famous and influential cartoonists, complete with examples of their work and items from their studios (so you get to see, for example, the desk layout that Marc Sleen would have used). Many famous cartoon creations are present, including mini statues of creations like Lucky Luke, Tintin (of course!), and, although not mentioned anywhere within the centre itself (because both original creators were French, I guess), Asterix. 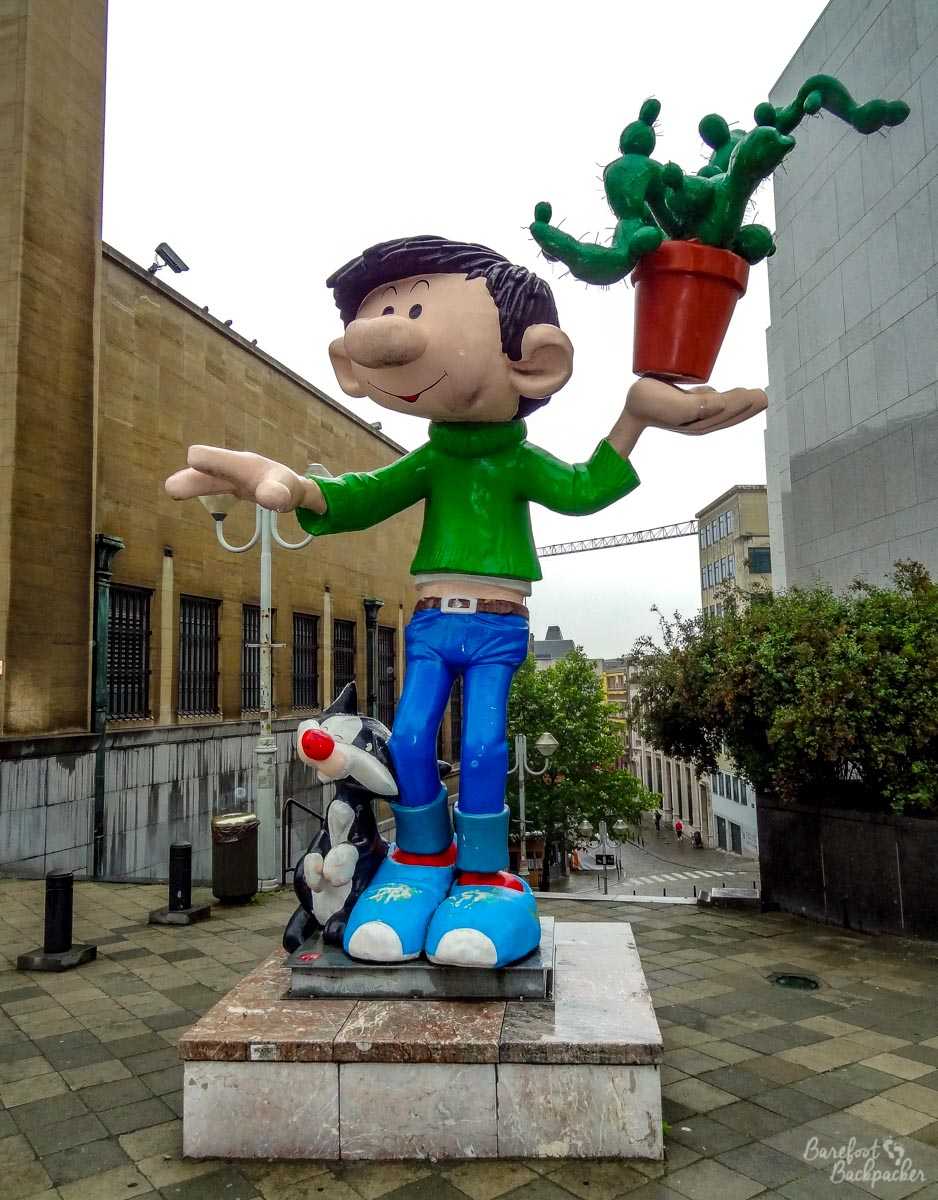 Outside the Cartoon Museum. This is the statue of Gaston Lagaffe – a creation of artist André Franquin, the everyday office worker is one of the most famous and popular cartoon strips in Belgium.

Comics, also known as the Ninth Art (one wonders what the other Eight are!), have always been very big in Belgium – to be honest it’s big across Francophone Europe, although there is a strong Dutch contingent too in Belgium (including Sleen and Willy Vandersteen). “Comic” and “Cartoon” are sometimes seen a bit of loaded words in English, as they imply ‘drawings for kids, usually with comedic effect’. While many of these Belgian cartoonists do draw/write to create ‘laughs’ amongst the readership, they are often satirical, parodic, and with adult themes and jokes. It’s a serious art form, and indeed the phrase ‘ninth art’ can be seen to demonstrate the ‘artistic’ nature of them not just the content. The city is full of representations of comic art on the streets too, in the form of murals. 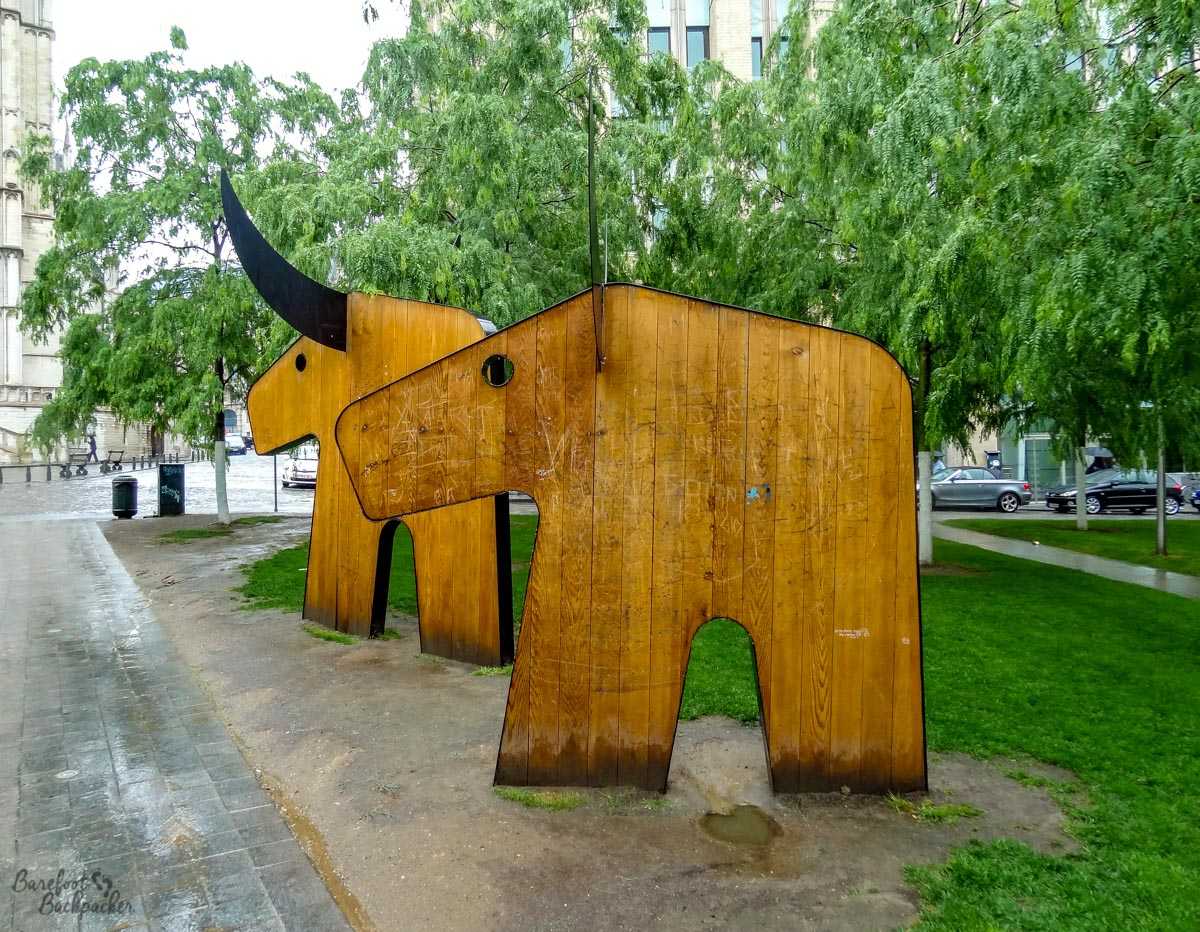 “Jing” by Matthieu Michotte. “An object that carries a trace, an imprint, a message” apparently. A representation of the ‘urban jungle’ – a jungle mammal in an urban environment. Ah, modern art…

Art isn’t the only thing celebrated in museums in Brussels; indeed there are over 90 of them, covering everything from typical Belgian strengths such as beer and chocolate, to laying dead once and for all that stereotype about ‘name a famous Belgian’, to more unexpected things like clocks, lace, and musical instruments.

One of the more esoteric, and on first hearing possibly incredibly boring, is the National Bank Museum. However I thought it was worth a visit – it details in simple terms what money is (it’s not just the cash in your hand, but it’s pretty much anything that can be used for payment, including services, goods, and of course plastic cards in lieu), where it came from, and why it’s important. There’s displays on money throughout the ages and the world, but also simple explanations, and indeed audio-commentaries, on different aspects of money and monetary policy (eg what a Clearing Bank does, what Inflation actually means, and the like). The building it’s in is actually the Bank building, and the initial rooms were originally used for Bank meeting. While a subject that would leave many people ‘dry’, I found it to be a good and comprehensive overview, whilst still being easy to follow. Caveat: I have an ‘A’-level in Economics; I am quite boring, yes. 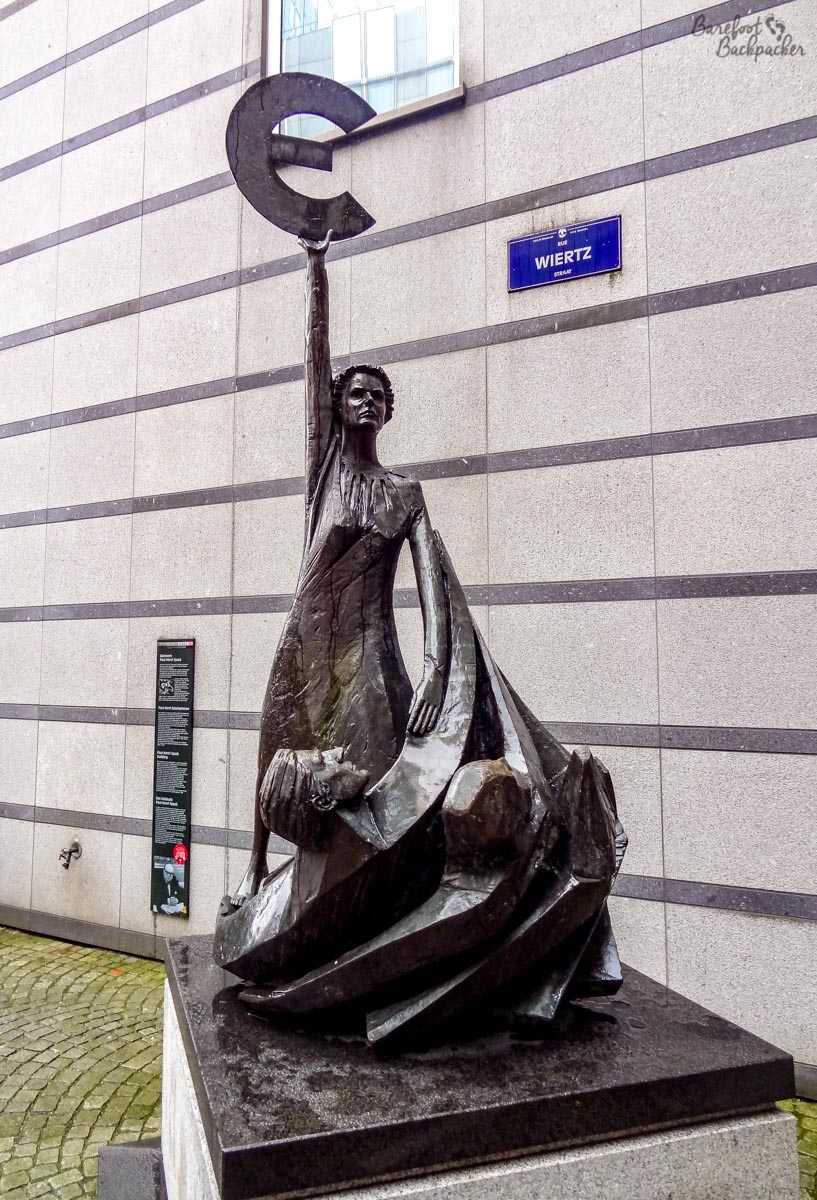 “Europe”: a statue by Belgian sculptor May Claerhout, of the Greek goddess Europa, carrying the Euro sign – a symbol of unity. Apparently. I’m British; I wouldn’t know these things!

Brussels is also, of course, the main home of the European Union – indeed one of the possible solutions to the fact the two halves of Belgium dislike each other but can’t agree what to do with Brussels is for Brussels itself to become an independent city-state defined as the ‘capital’ of the EU. The area of the city the EU buildings are in is … modernist. The European parliament itself is very ‘windows and fibreglass’, it’s not something I could imagine very easily people wanting to take home replica models of. Due to it being occupying both sides of a narrow road, and being quite tall, it’s also quite a hard thing to take a picture of. It backs onto a landscaped parkland area; in casual walking, you only really see the back of the many buildings. The park itself has other, unrelated, buildings that surround it (including a school and a museum). 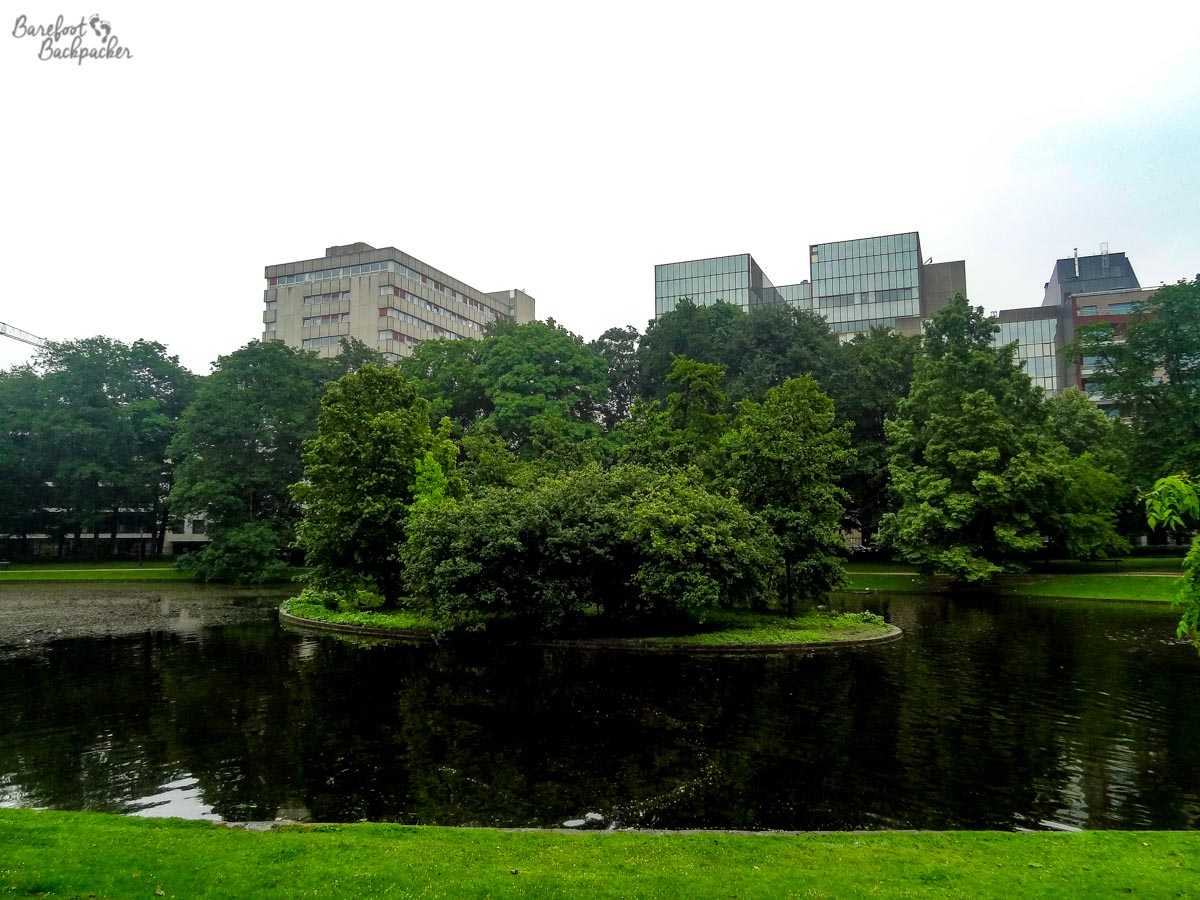 The EU buildings as seen from the park. 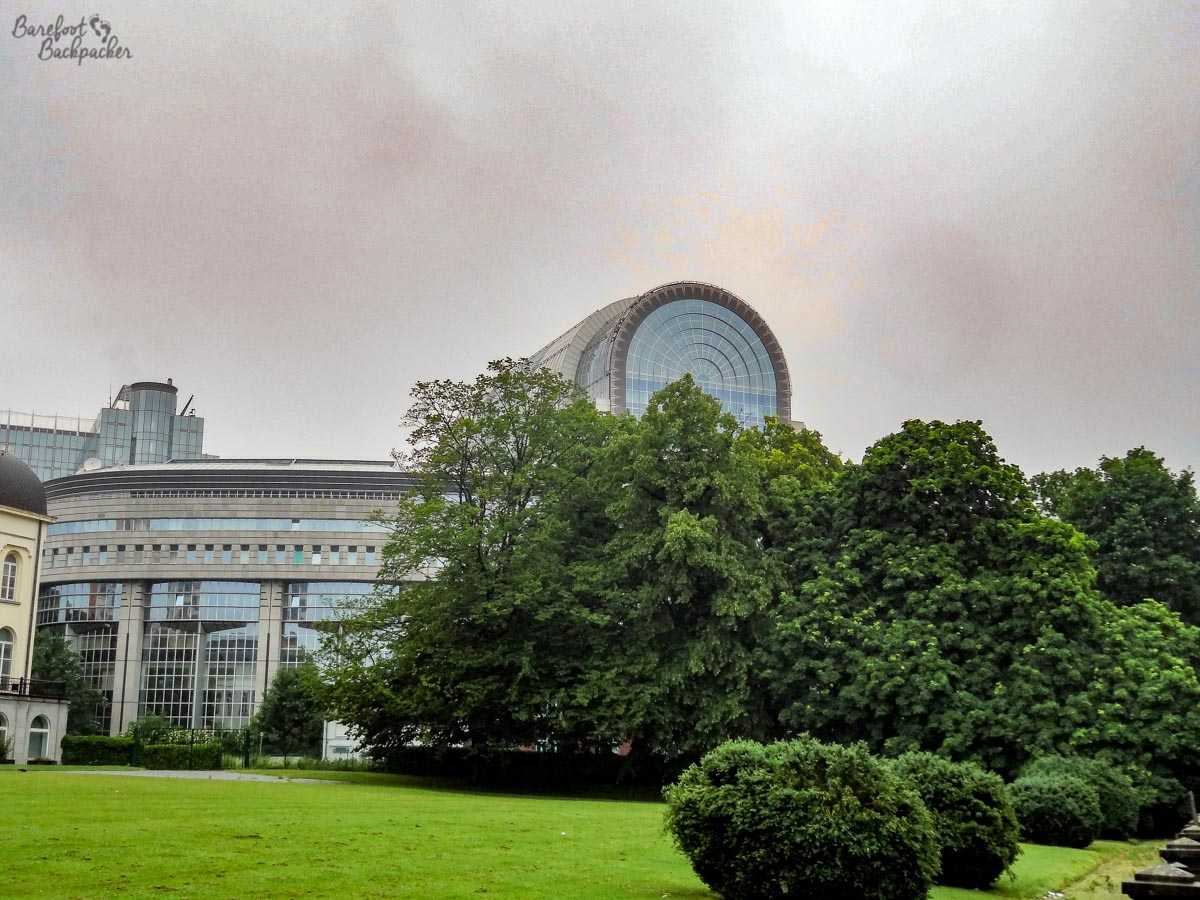 One of the buildings in the EU complex.

On the pavement walking towards the buildings, the stars of the EU flag are painted in blue. Iconic branding, if maybe slightly dull. In addition, my visit to the area was on a Sunday late afternoon, so there wasn’t much going on. 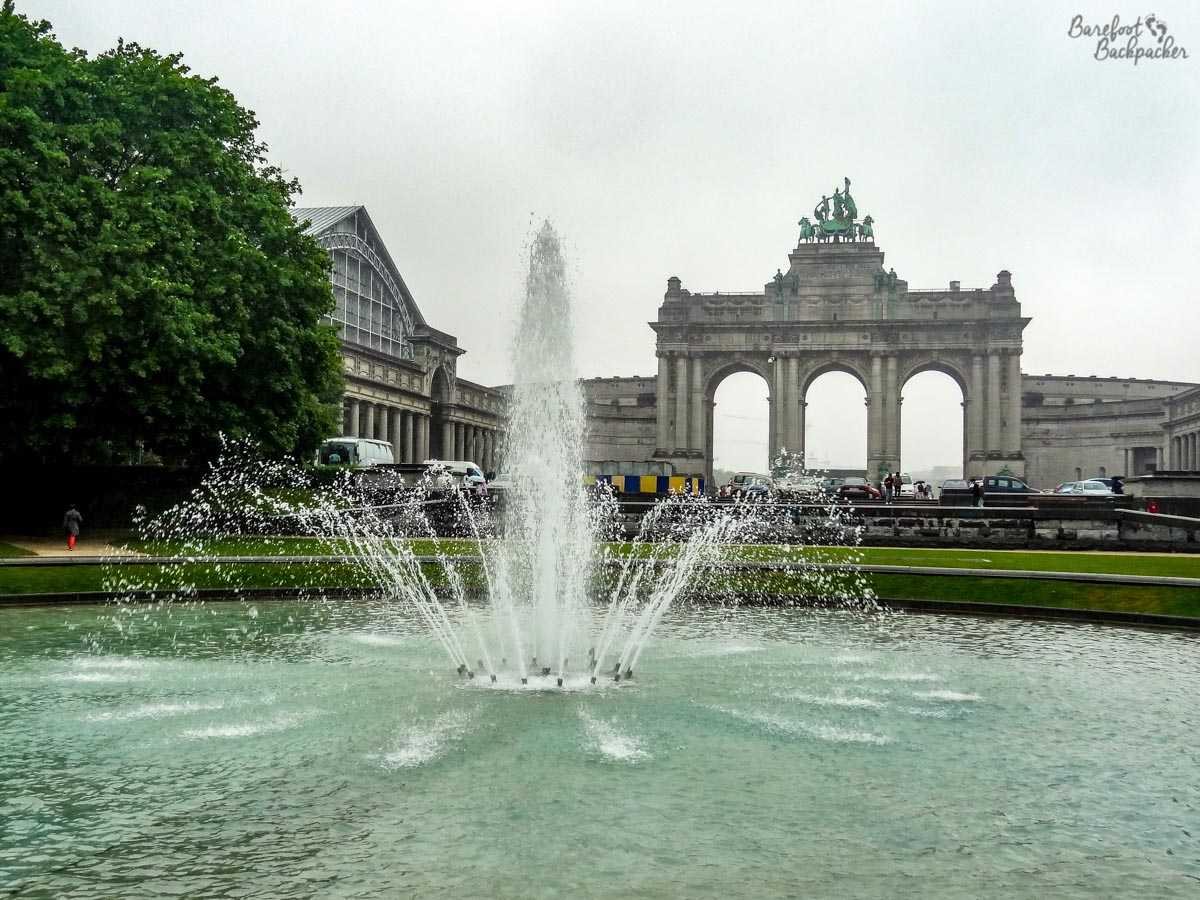 The arch and a fountain. Not that the day needed any more water.

Nearby is the Cinquantenaire, an arch (similar to the Arc de Triomphe in Paris) built to commemorate the 50th anniversary of the creation of Belgium. And it was indeed completed in time for the anniversary. The 75th anniversary … [how these guys hosted Euro 2000 I’ll never know]. The arch is surrounded by grand buildings that are mostly now museums, and opens out onto a large parkland area where they host events (they were setting up for one when I wandered through). At the Western end of the park is a monument to the Belgian adventure in the Congo River area, a part of Belgian history that these days they’re a bit embarrassed about … 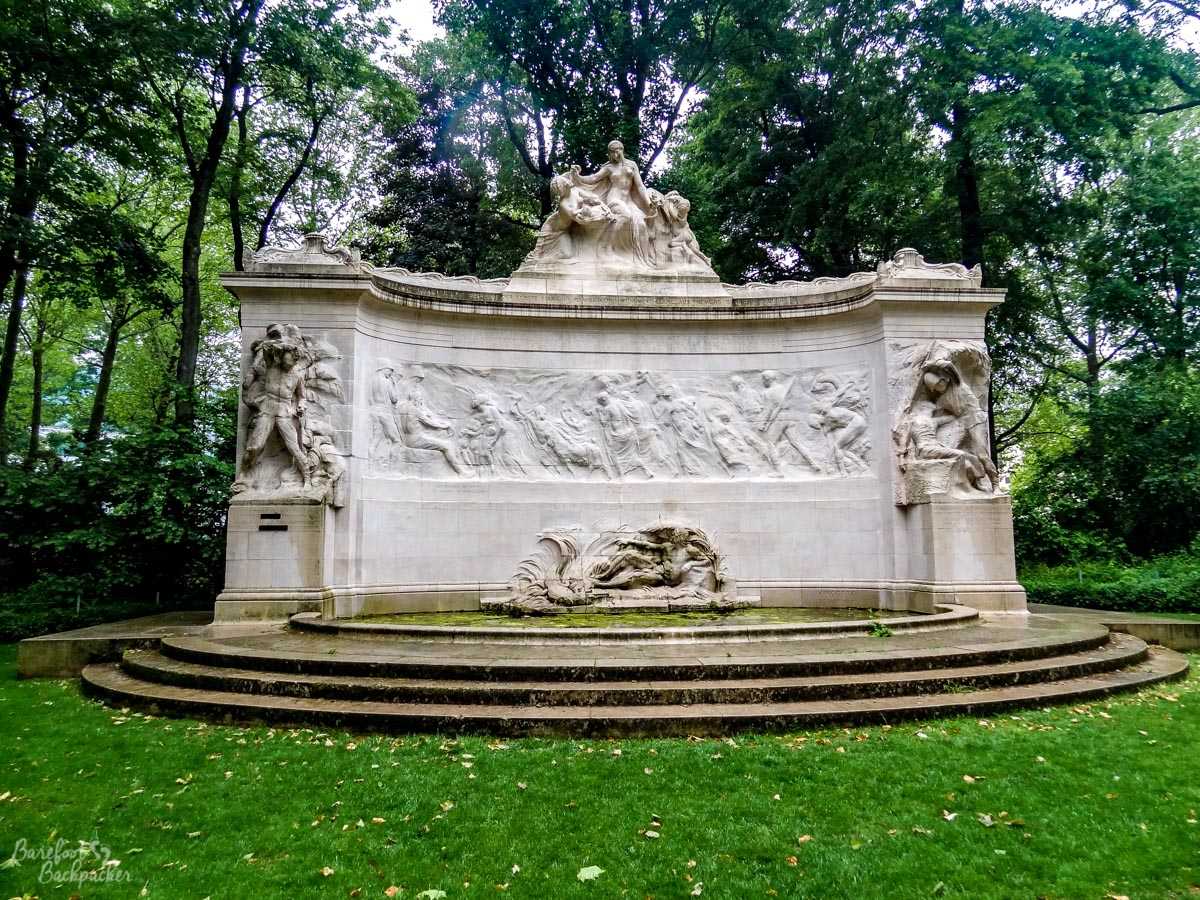 The Congo Monument. Probably best to leave that there, with no further commentary.

But to sum up Brussels, I’m minded to return to one of the bars I visited for some decent local beer and nibbles. As I was eating, there was some music playing outside, from what I imagine to be a reasonably high-quality busker, and I noticed two tourists-with-small-rucksacks and umbrellas suddenly start dancing in the street outside to the music. How quirky, and terribly Bruxellois! 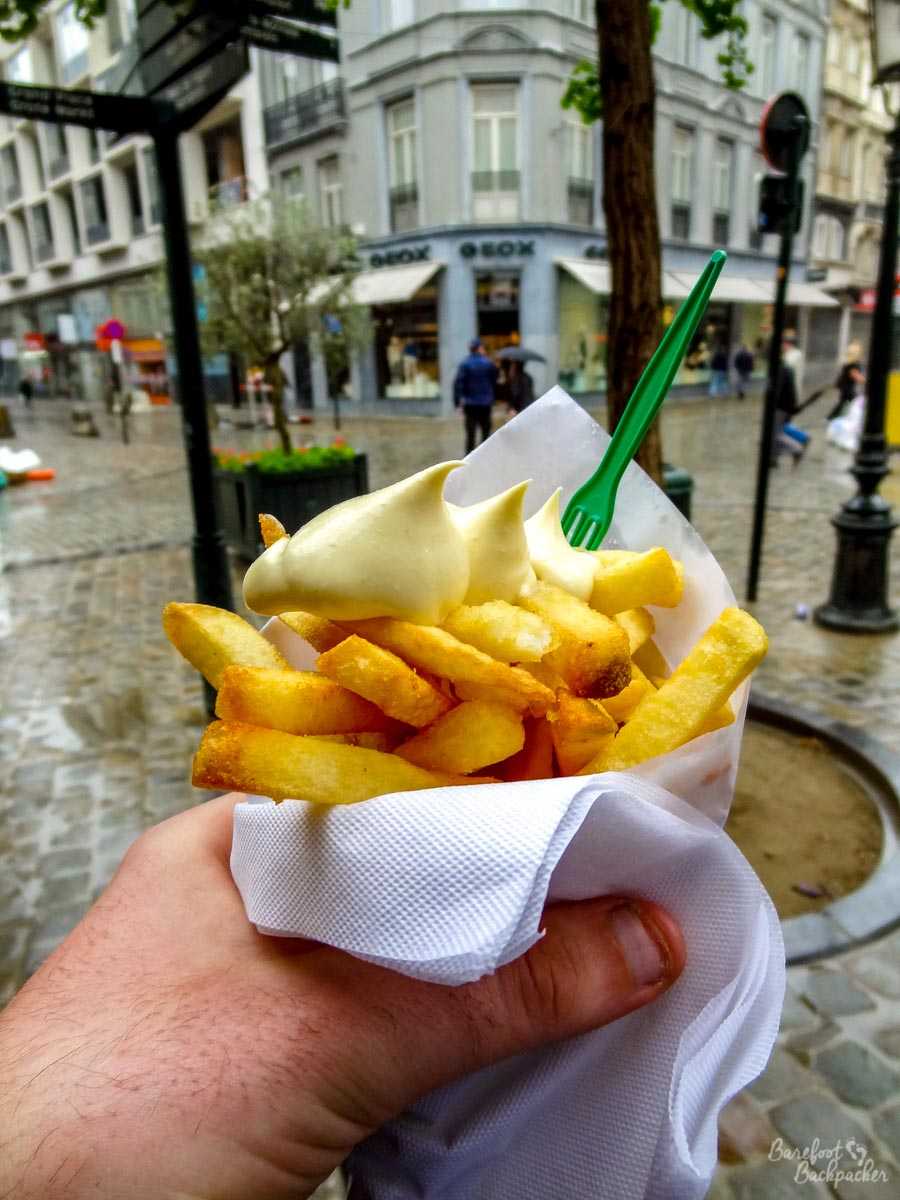 The standard street food in Belgium – fries with mayo.

And that’s what I feel about Brussels. It’s a bit like Paris, but with less people, less focal points, and a more ‘laissez-faire’ charm. It’s a bit ‘grittier’, not as polished, but I think all the better for that. It has a style that’s understated and less ‘full-on’ than Paris, but it’s definitely a lovable place.

One thought on “Brussels – Europe Central”