Brussels is full of public art, and in fact walking around the city exploring it is one of the best free things to do in the city. There’s something pretty much around every corner, if you look hard enough, from paintings on the walls to sculptures on the street corners.

Belgium’s most famous ‘resident’ is the Manneken Pis, which is actually much smaller than you’d imagine. Seriously. Wikipedia says it’s 2′ tall, but as it’s in an alcove on a pedestal and not easy to get to, it’s hard to verify. 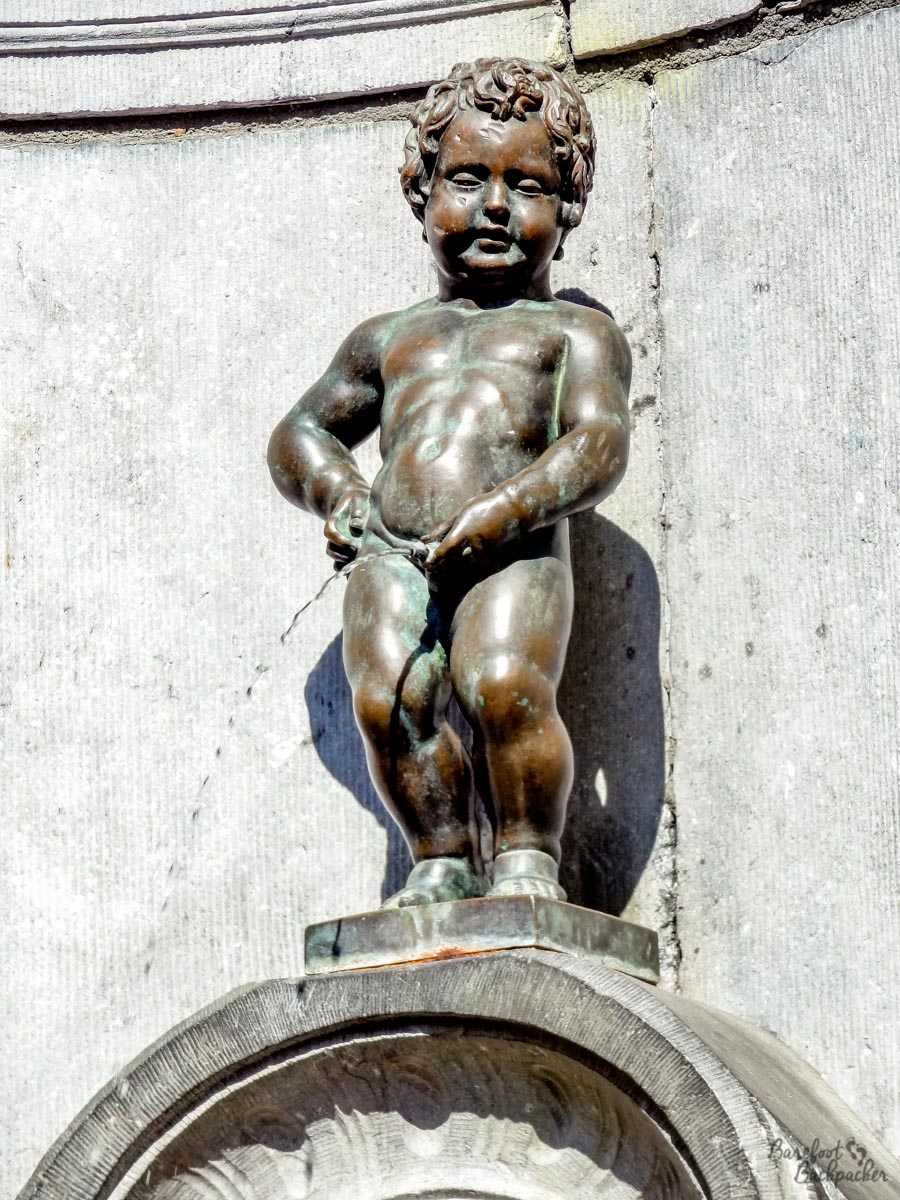 In most scenarios, a picture of a naked boy having a wee would be insta-banned. But art is a very strange thing…

There’s no polite way of putting this, so here we go. It is a statue of a boy having a piss, hence its name (literally ‘little man pissing’). There’s been a statue here since the late 14th Century; this particular chap was designed in the early 1600s. He’s stuck away behind railings because, as you might imagine for such a small, notable object, there’s a tradition of him keeping getting pinched. A second tradition has him being dressed up in seasonal/festival clothing – and since the Belgians love a good festival (seriously, whatever weekend you’re in the country, there’s a fair chance you’ll be able to see some local tradition!), this happens quite oft.
There’s a whole host of stories and legends that try to explain his existence, from the ‘defensive valor’ (child urinates on advancing armies/enemy bomb’s fuses) all the way to the ‘lost child’ (goes missing, search conducted, child found happily peeing on the side of the street, oblivious to it all). Personally I think it’s just an example of the quirkiness of the Belgians, as sort of ‘why not?’. 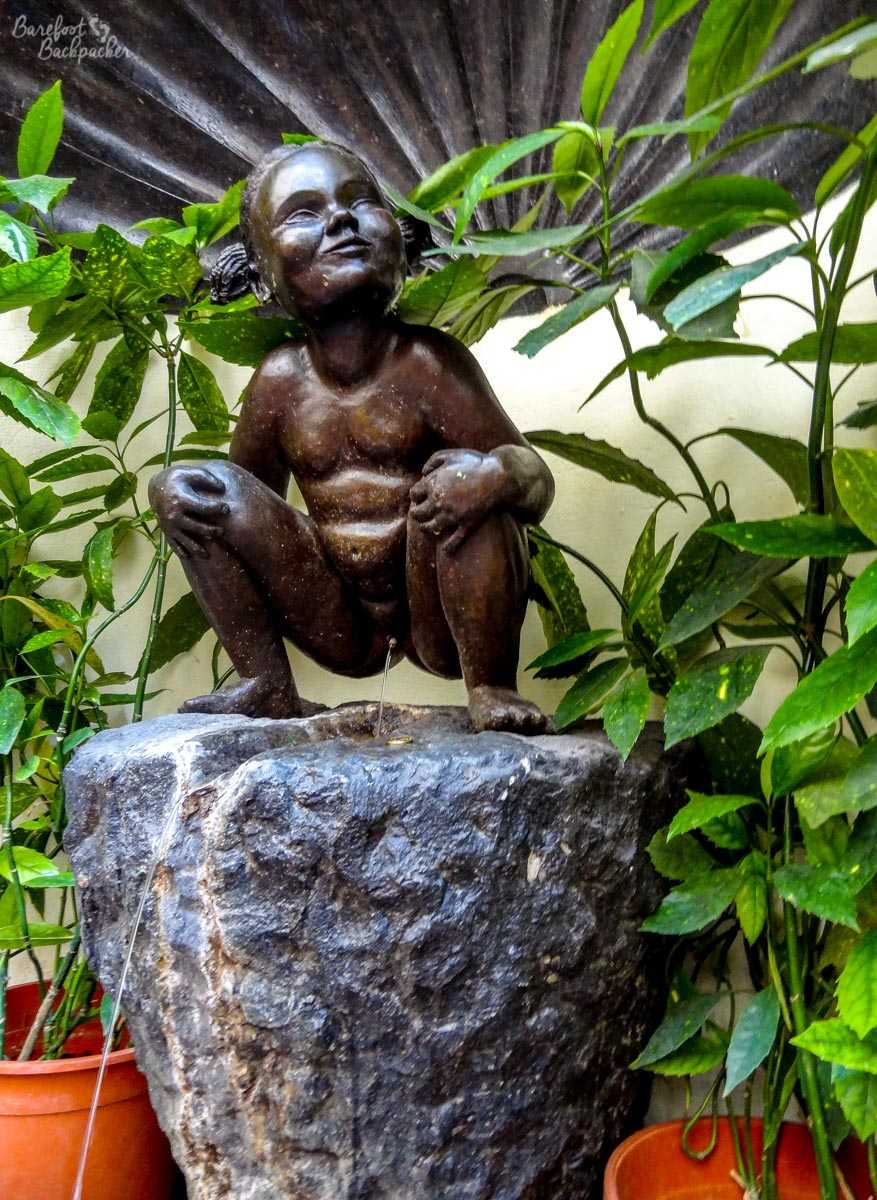 If that’s not quirky enough, more recently he’s been joined in Brussels by two other similar statues. The ‘Jeanneke Pis’ (a girl squatting and urinating) was installed in 1987 pretty much as a ‘companion’ to the Manneken Pis, in an early example of equal opportunities. Contrary to popular belief, she was not modelled on the hordes of young British hen parties that have lit up Europe since the invention of the package holiday. 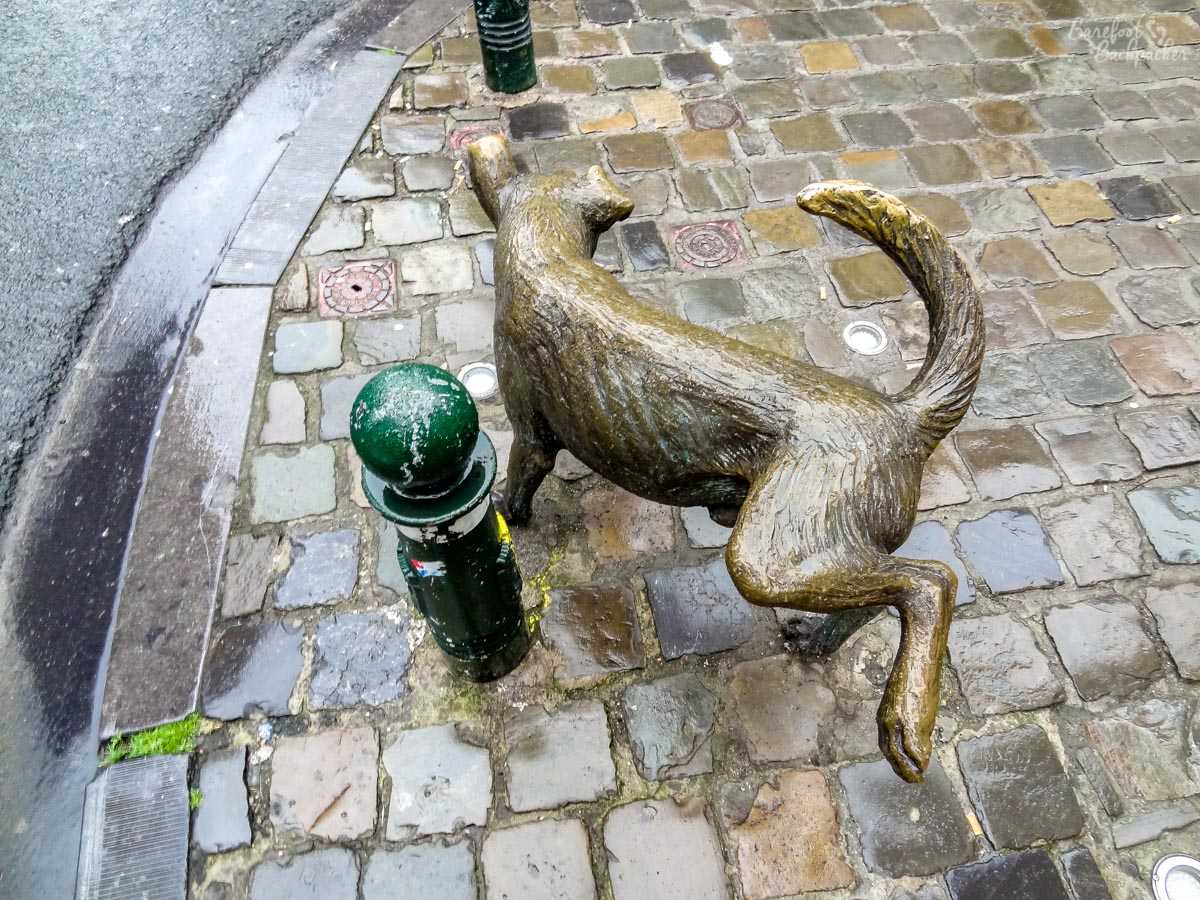 More recently still (1998), as if a boy and a girl were not enough, the Het Zinneke (and, importantly, not the Zinneke Pis) was created. This is a dog cocking his leg up on a bollard. Maybe Brussels felt that the boy and girl needed a pet, or maybe by this point the city council were past caring. Notably though, this particular sculpture is in the fashion district, so there’s a feeling that just maybe this was a damning indictment on the fashion industry. Or maybe it’s simply that the Belgians are urologically-obsessed? Incidentally, the term ‘Zinneke’ is a nickname for people from Brussels, and originates from the name given to the stray dogs that congregated around the River Zenne in the city, hence its name. 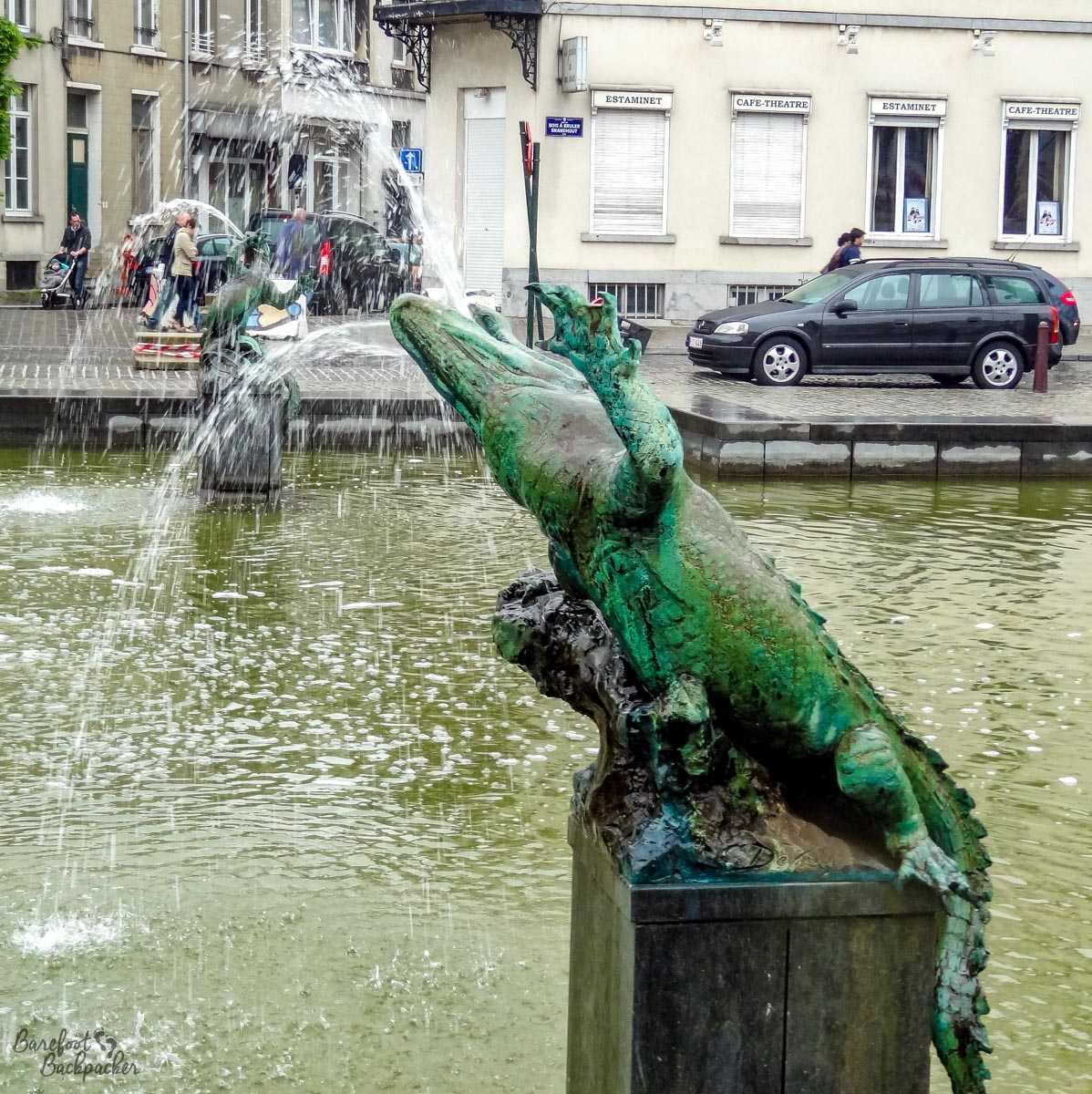 Frolicking crocodiles. As you do.

There are other weird and wonderful sculptures scattered around Brussels too. Most notable are the Anspach fountain, complete with crocodiles that look like they’ve been captured in mid-dance, and the statue of commemoration to some of the brave but oft-forgotten soldiers of WW1 – Brussels has the only memorial I’ve ever seen to war pigeons. 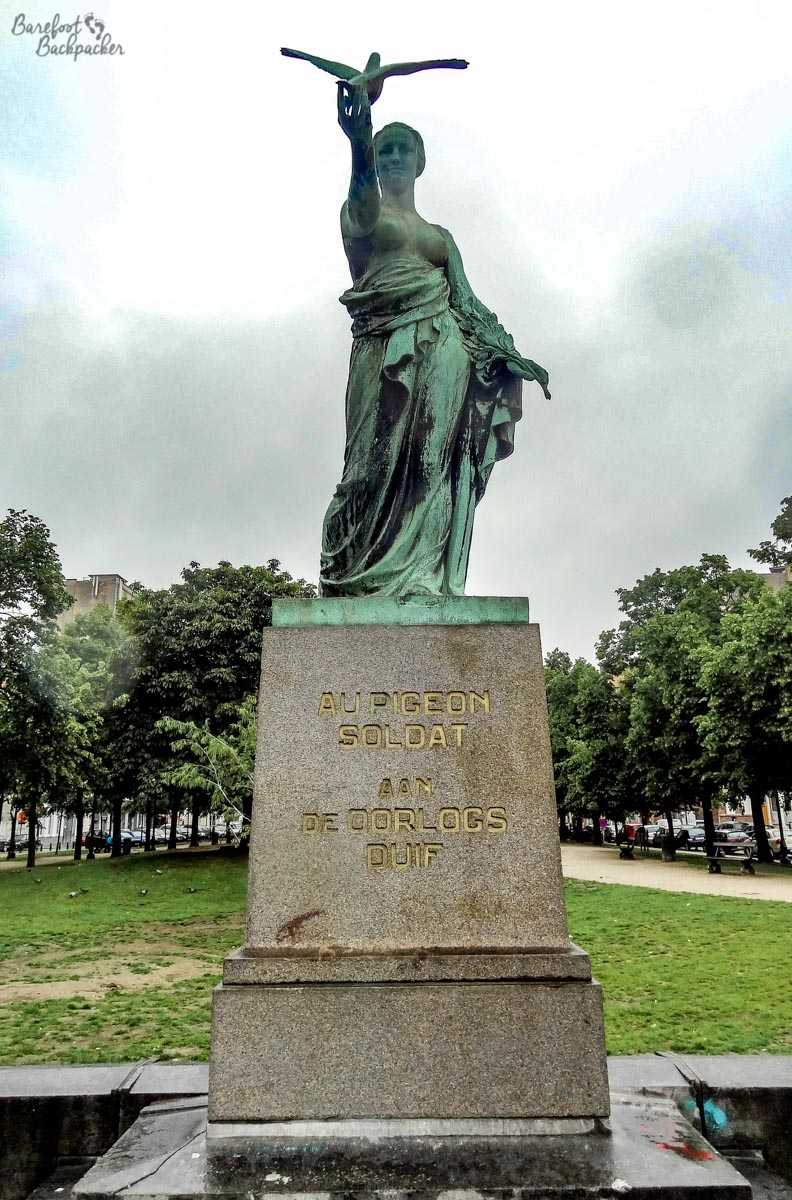 Statue commemorating the pigeons in WW1. Presumably including the one in the Blackadder Goes Forth episode…

It’s most famous ‘artwork’, however, is out in the distant suburb of Heysel. A symbol of Brussels almost as much as the Eiffel Tower is of Paris, is the rather odd Atomium – a series of interconnected metallic spheres that are supposed to accurately represent (although at several million times’ magnitude) the structure of an Iron atom. You can go up inside it and see good views over Brussels. It was around 10am on a very wet and grey Sunday morning, so I decided to forego that one … 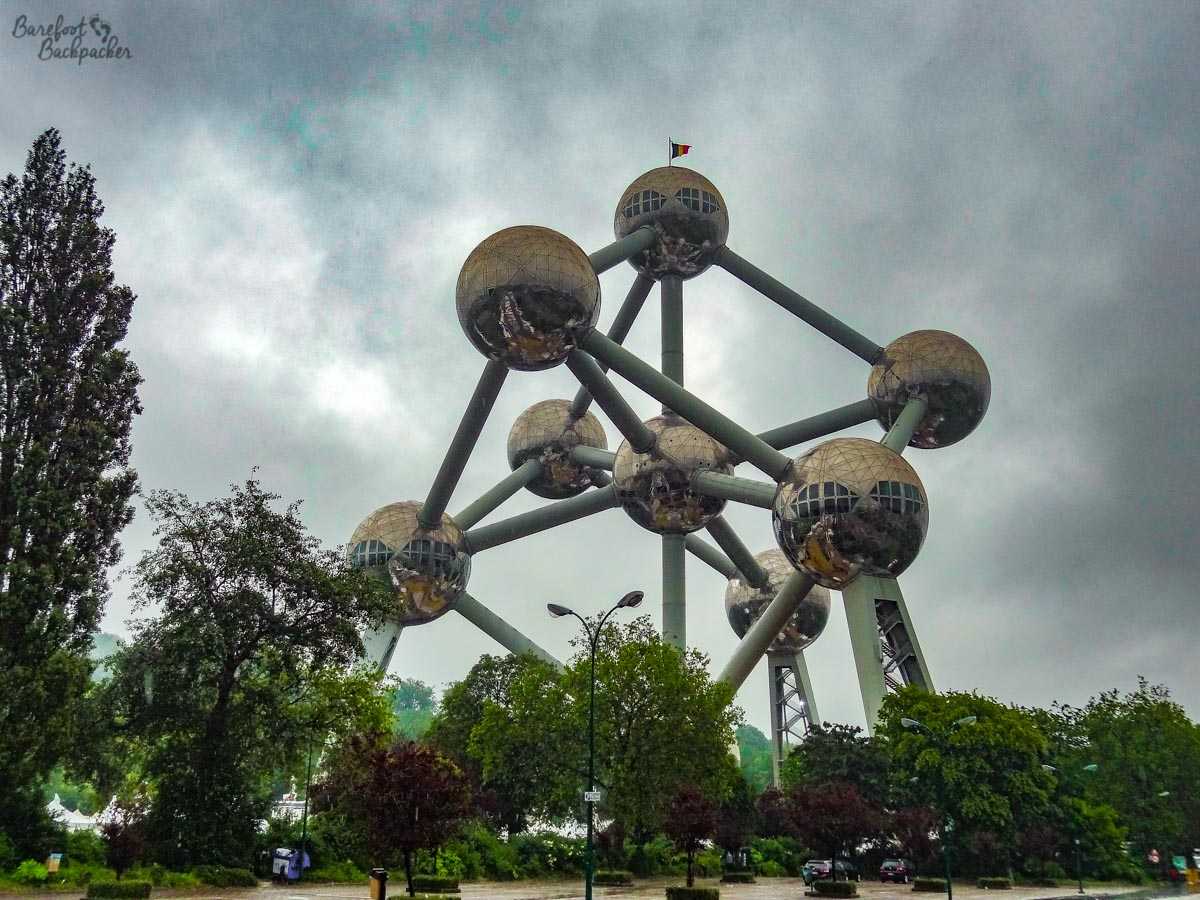 The Atomium. Do you have balls of iron?

The Atomium is also famous from a blogging/photography point of view. It’s one of the most notable sites in public that’s copyrighted – not just the design itself but the actual finished object. This means it’s illegal for people to publish pictures of it in situ for profit without official written permission. I’m not making any money from this blog so #FightTheSystem. Or something.

Public art is not restricted to pissing statues and weird representations however. Brussels is one of those cities, like Stockholm and Moscow but unlike Berlin, whose metro system acts as an art gallery. Notable stations I came across (your mileage my vary) include:
* Houba-Brugmann, where both sides of the rail tunnel are painted with artwork laid out like a set of film slides or depth-of-field photos of a woman dancing. She starts off standing still and plain at one end of one of the platforms, but by the other end she’s dancing with a flourish. The opposite side of the platform has the same on the walls, but with more people and a much more obviously motion-blurred background. 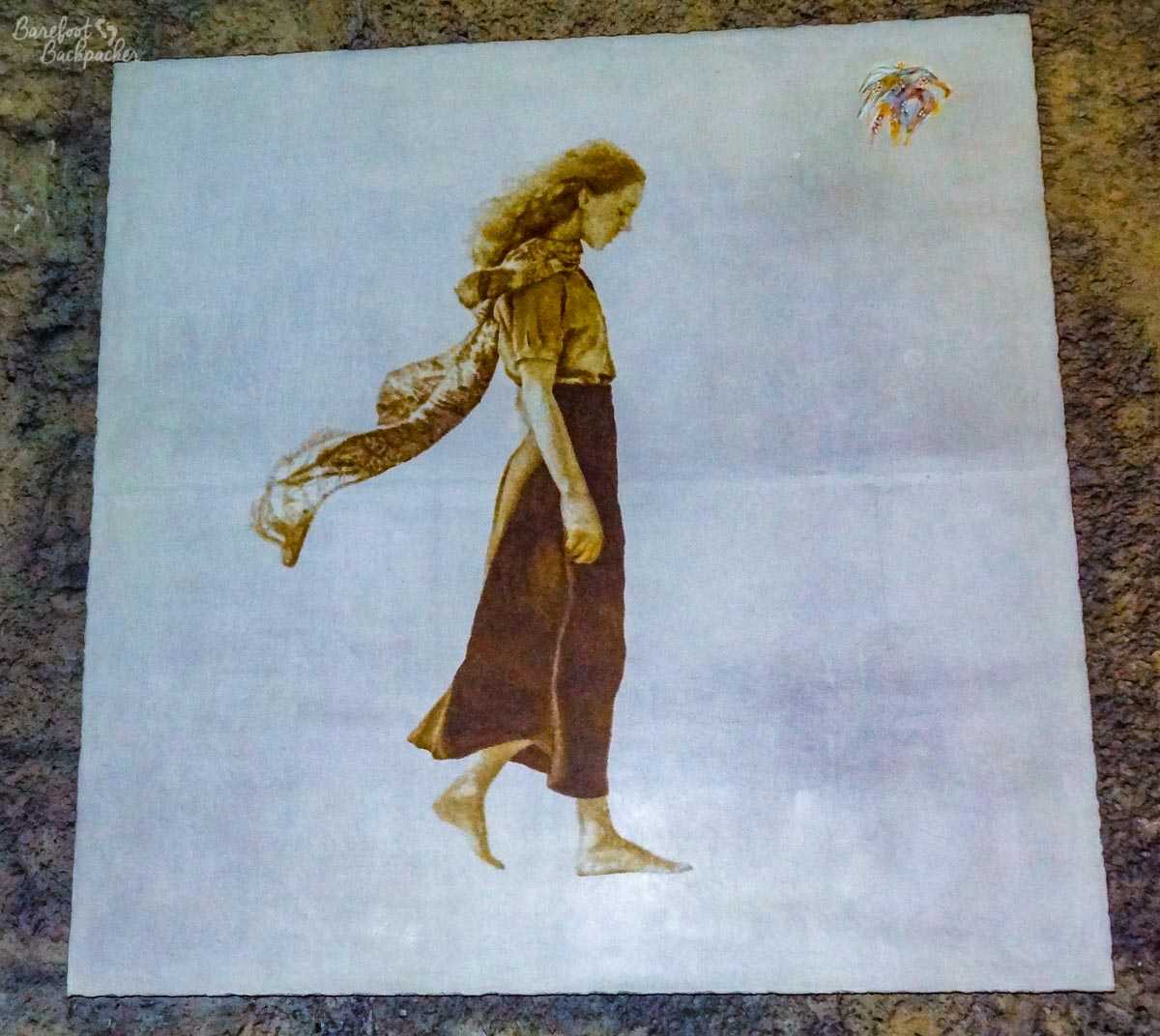 It’s not relevant that she’s barefoot. Not at all. 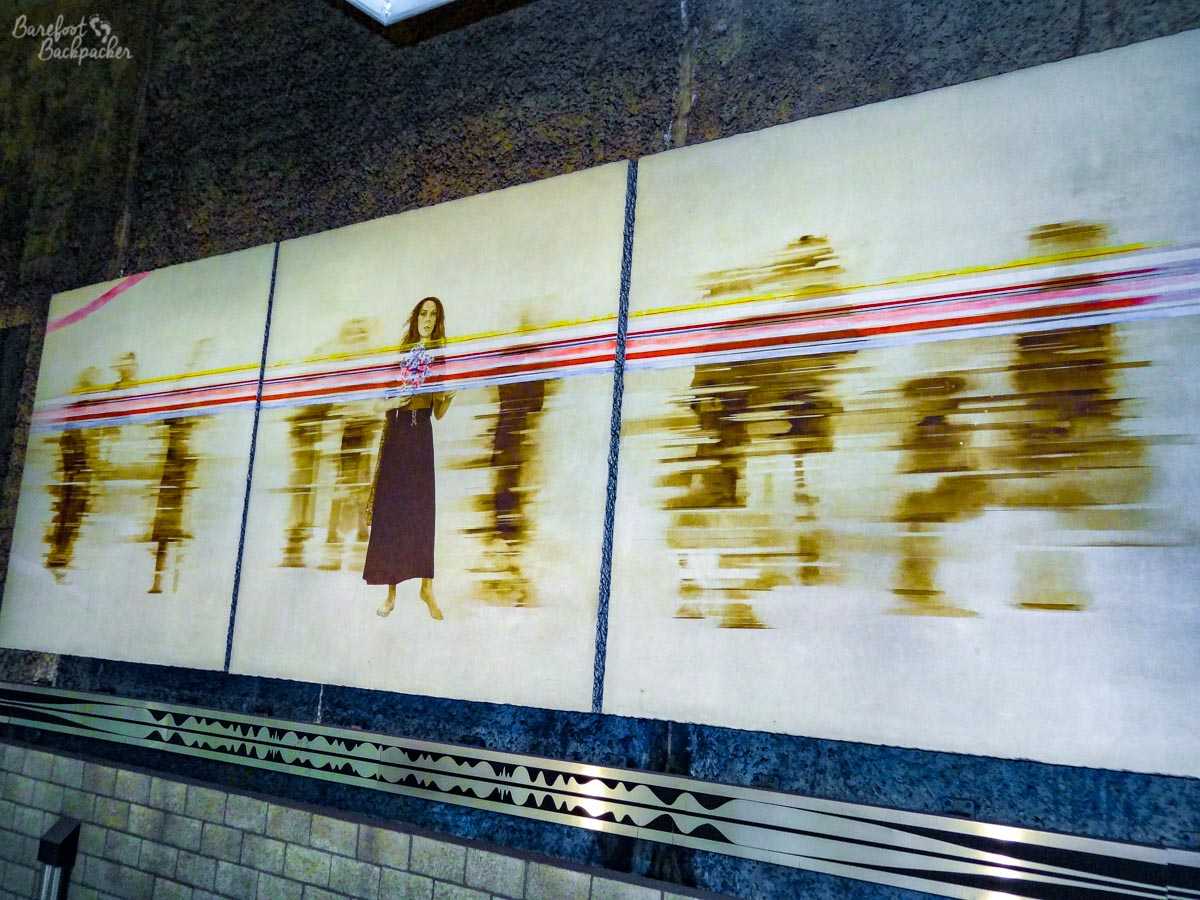 * Sainte-Catherine, plain white walls laden with what have the effect of hand-drawn, large, flowers of various species – roses, daffodils, etc. 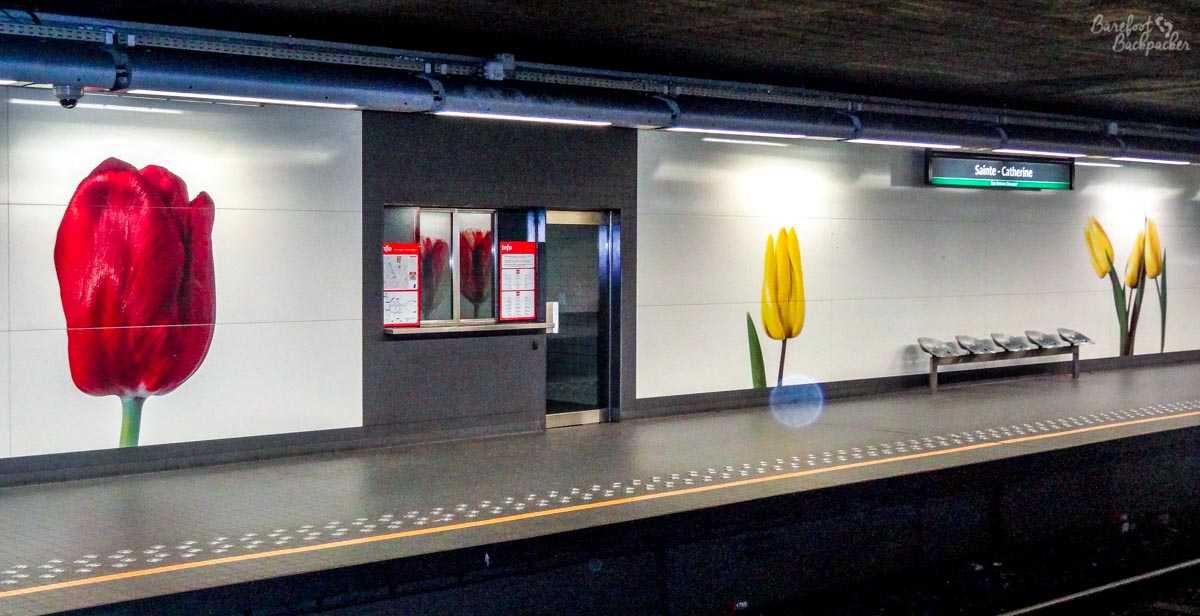 * Maelbeek, where the artwork on the walls takes the form of simply-drawn outlined heads in a rather modernist, almost cartoonist, style. Apparently these are portraits by the Dutch artist Benoît van Innis. Nope, no clue. 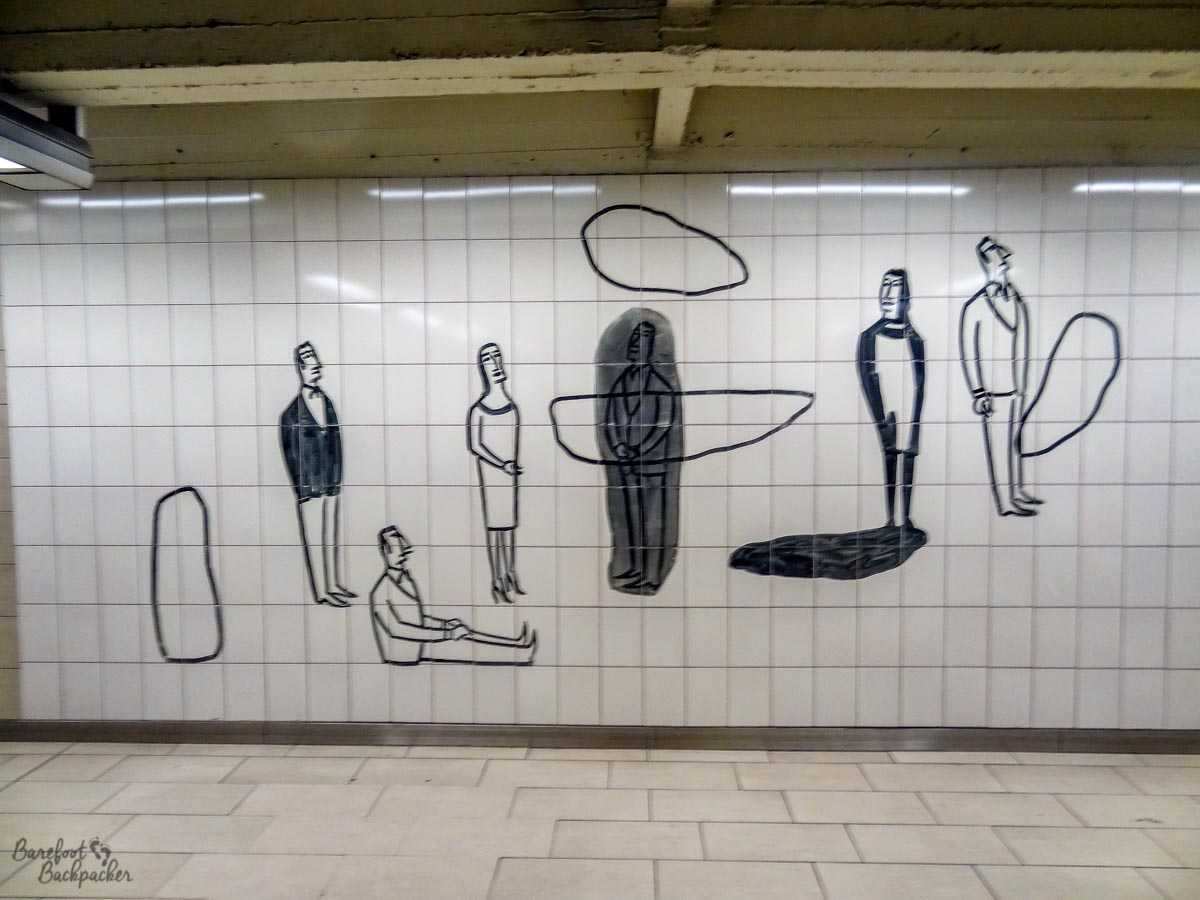 Of course, the main public art draw in Brussels is on the street. Belgium has a history and culture of cartoons (to the extent they fully embrace it as the ‘Ninth Art’ – you can look up the other eight yourself!), so it’s probably not surprising that you can get a town plan of the city centre and find the designated murals listed on it – a self-guided street-art tour.

Note that while the map tells you where they are, it doesn’t give you a precise location (so some of them take some searching for – hint: look up), nor does it give you any background information about them. I find it fun to find out more about them in research afterwards, but again your mileage may vary! 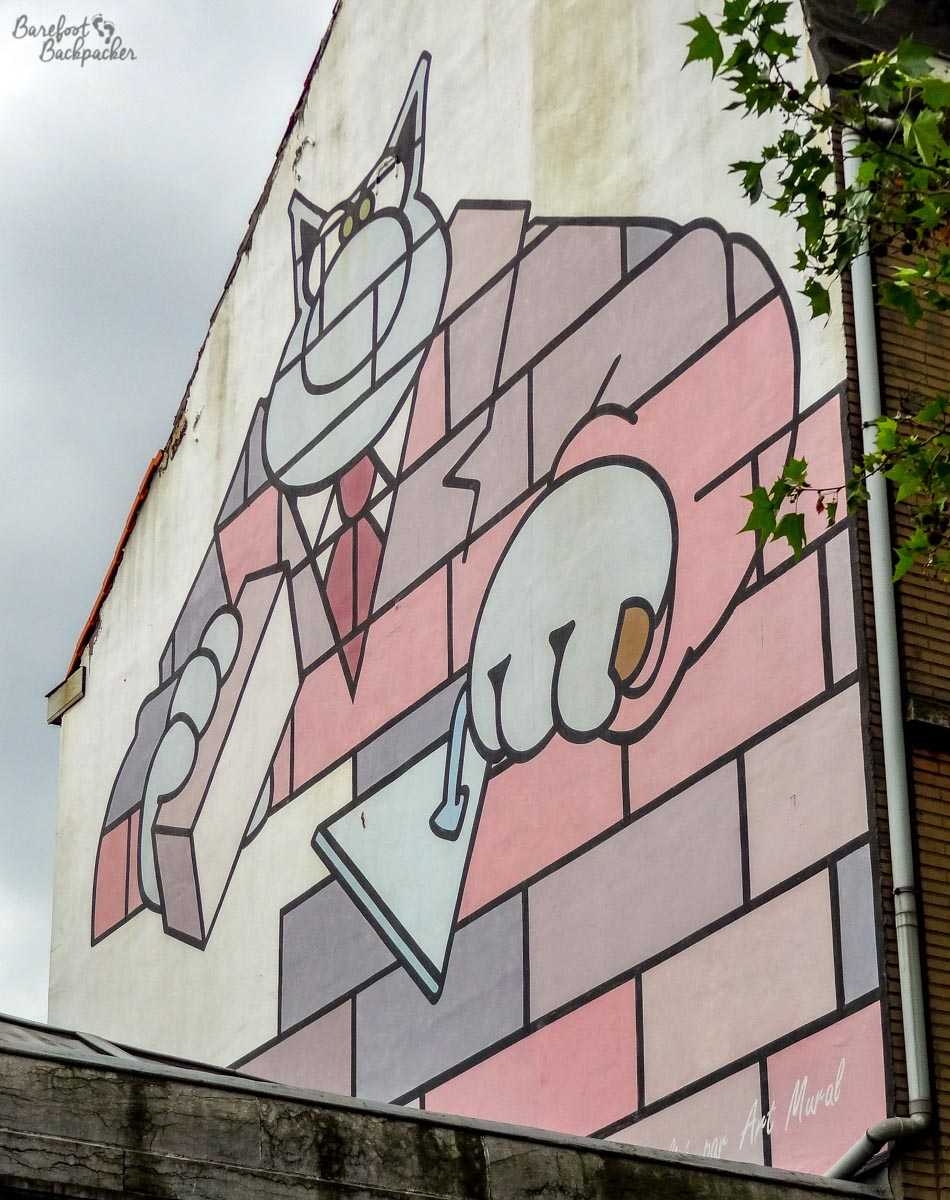 Le Chat, a cartoon character by Philippe Geluck; he’s a fat cat in a suit who is often found in absurd and surreal situations.

Some of these murals represent characters fundamental to Belgian culture – often drawn by the creators themselves. One such is a drawing around three storeys up on a blank wall, of what appears to be an anthropomorphic cat building a wall. This is “Le Chat”, a famous character in Belgium whose standard ‘shtick’ is to appear in one-panel cartoons with a somewhat surrealist bent.
Of course Tintin makes an appearance – although Hergé has been dead for some time, the characters he created are faithfully recreated on a wall, casually; without the map you might not even notice they were there. 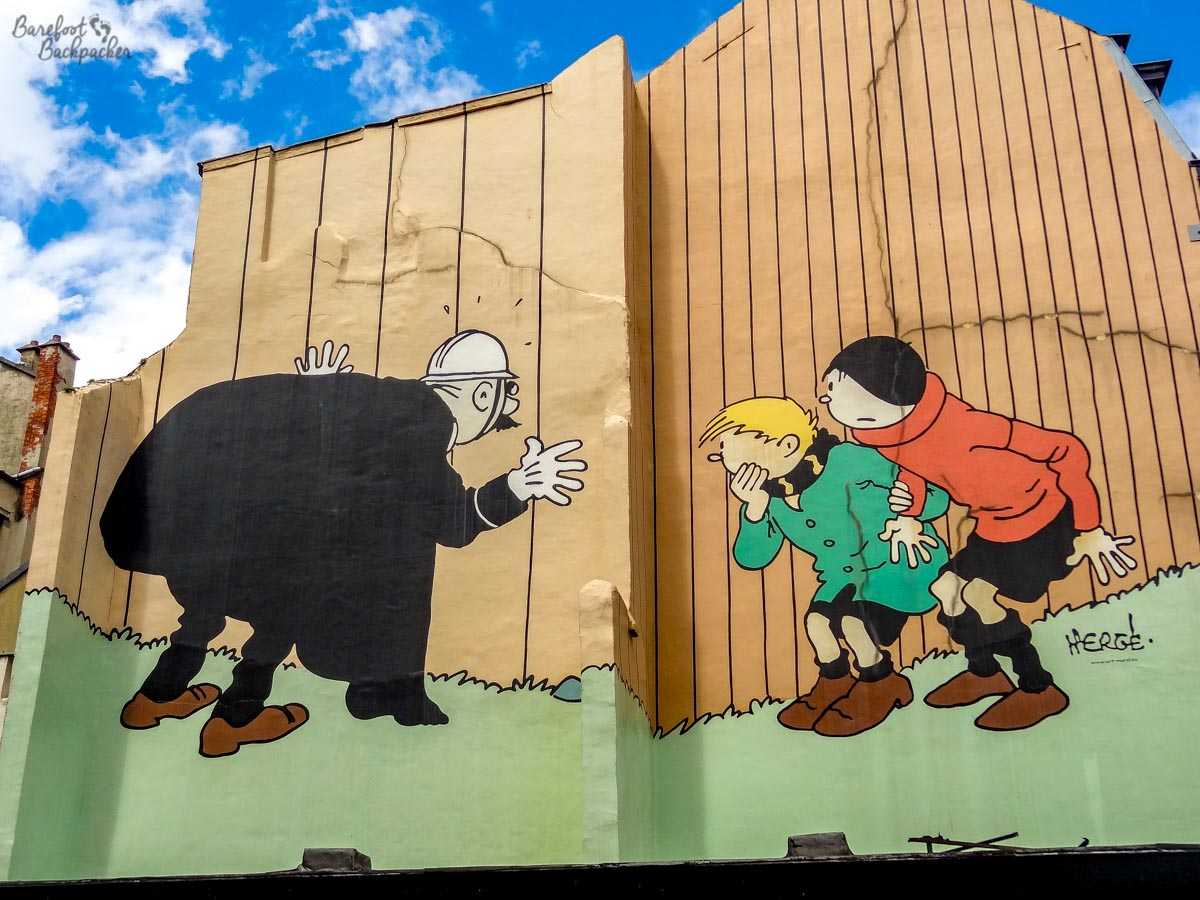 Many of the scenes drawn though don’t depict famous characters, but instead are bespoke to the environment they’re in. Some of them are humorous, such as one artwork that makes used of a tall thin wall that would otherwise have been blank or daubed in tagging graffiti – a boy at the top drops something out of a window that hits a man walking at ground level). Others are created to artistically set a particular scene, such as one drawn in a very 1920s American ‘film noir’ style, depicting a well-dressed man and woman leaving a bar at dusk. Still others are socio-political; gay rights, urban regeneration, etc. 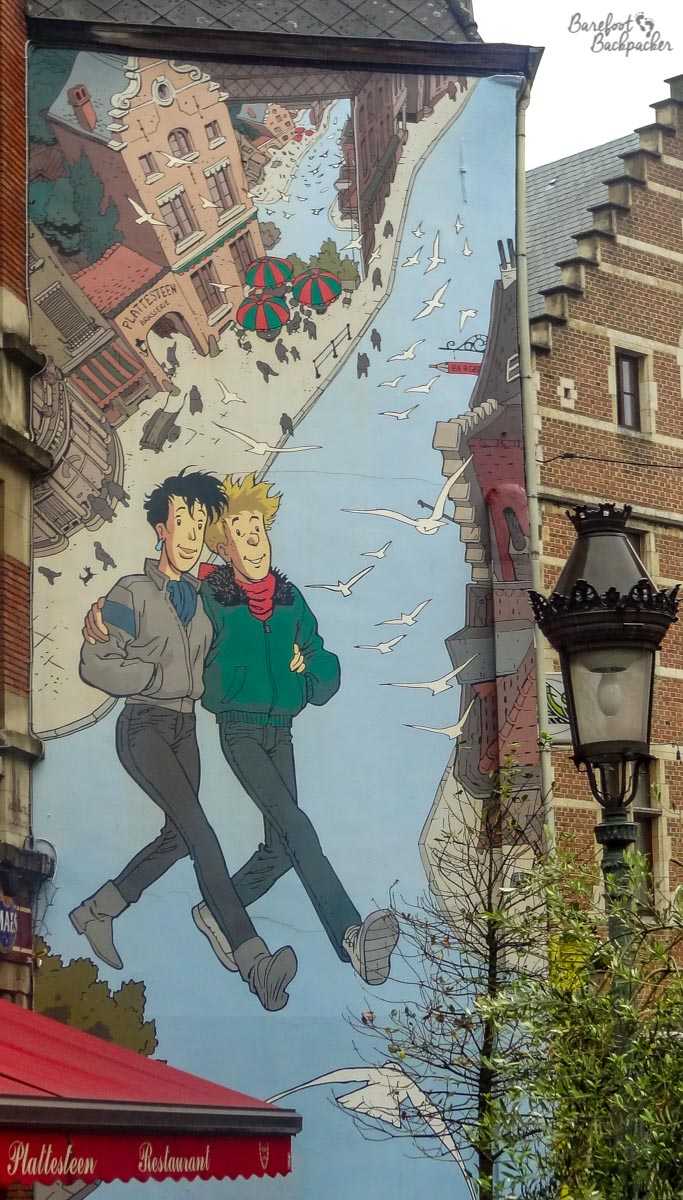 The majority of them though merely appear random; just simply pretty works of art that brighten up otherwise blank walls. If only all cities did this 🙂 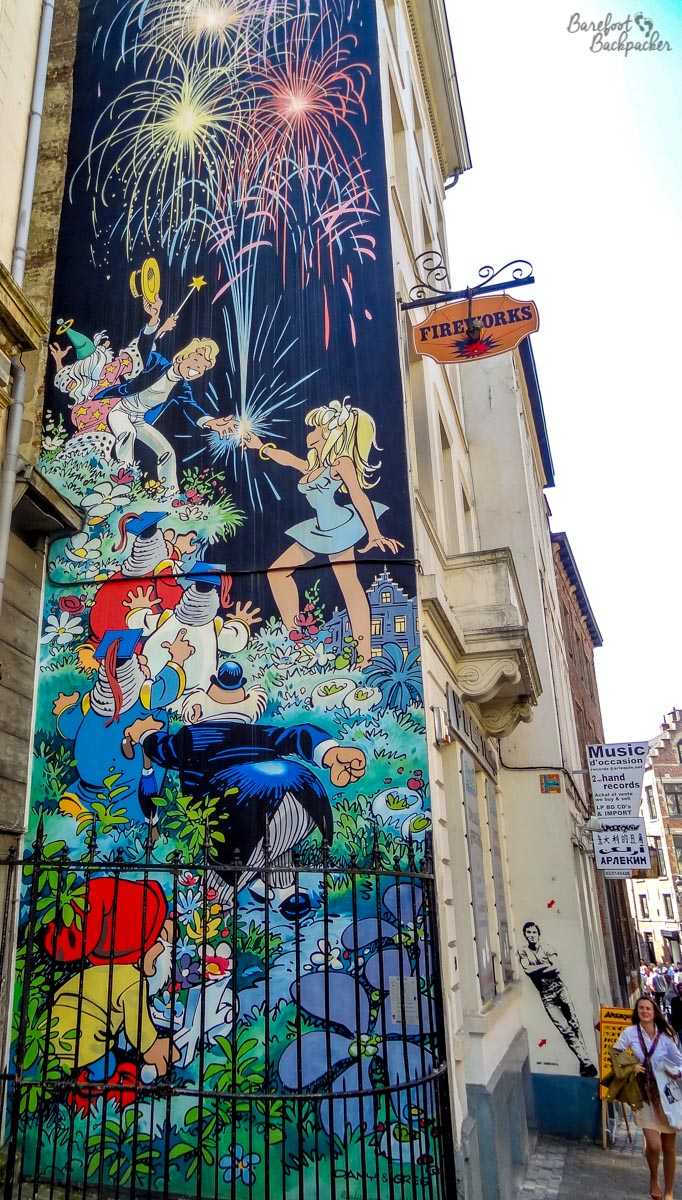 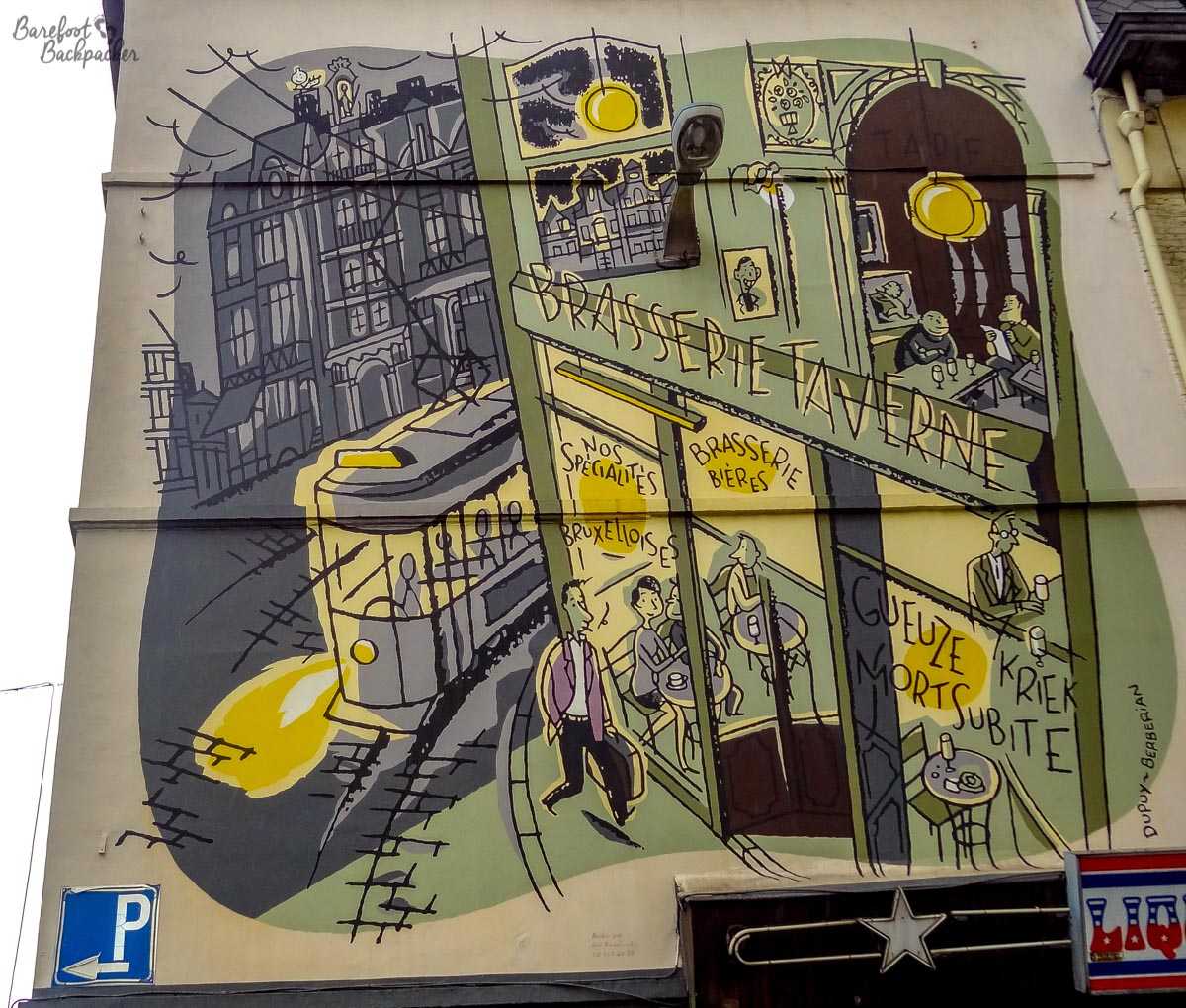 Art is thus everywhere in Brussels, even when/where/how you least expect it. Wandering back to my hotel I noticed a set of painted footprints on a stairway; I followed them backwards to where they came from and discovered that someone had painted the concept of someone emerging from a bin at the bottom! So quirky, so Belgium.

4 thoughts on “Put Some Clothes On! – Street Art In Brussels”