Luxembourg isn’t a country I knew that much about, in all honesty, before I realised it was convenient as a short trip from Belgium. On first sight it doesn’t appear there’s terribly much to know – it’s the 179th largest country in the world (1,000 sq miles / 2,600 sq km – for the Brits this makes it marginally smaller than Oxfordshire and Derbyshire. For the Americans, this makes it 200 sq ml smaller than Rhode Island. For the Aussies, it’s slightly larger than the Australian Capital Territory. For the French, it’s the size of Luxembourg, Jeez!!), but as I’ve grown to make a blog niche of, there’s plenty there if you look deep enough.

In the North of Luxembourg are a number of small towns, including Ettelbruck, Diekirch, and Vianden. The train there from Liège runs roughly every 2-hours along a mainly single-track (!) line, and has the definite feel of a small rural line in the UK, one of those beautiful journeys only kept alive by the gratuitous use of subsidies and political pressure because it’s the only link to the outside world for a series of marginal constituencies. While Flanders is flat, farmed, and historic, Wallonia is rural, rugged, and forested – the line runs through the countryside with a river valley clearly visible in front of tree-covered hills and occasional quarries. 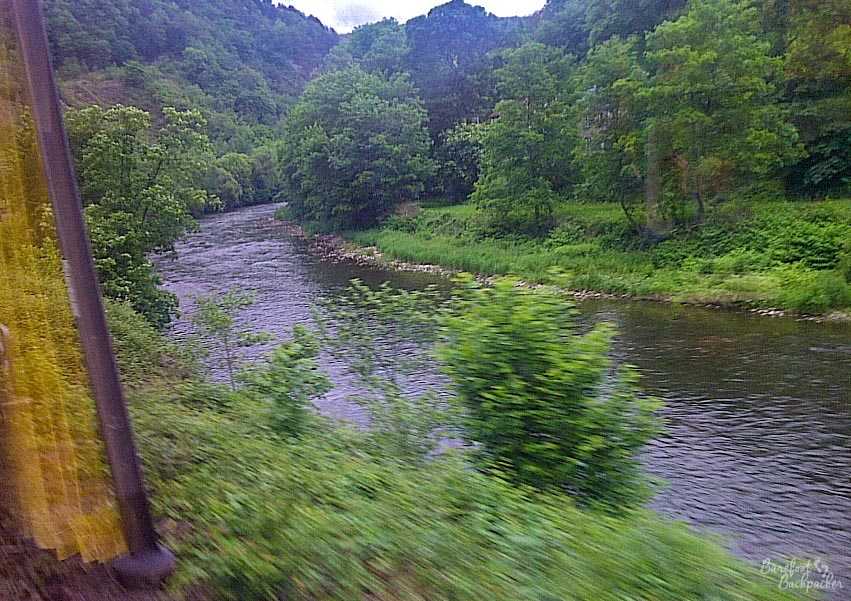 Snapshot from the train. These things always look better in real life though.

Vianden is famous for its castle on the hill; it’s one of those places that looks gloriously ‘romantic’, in that mediaeval way – something that wouldn’t be out of place as the setting for an 18th Century opera. 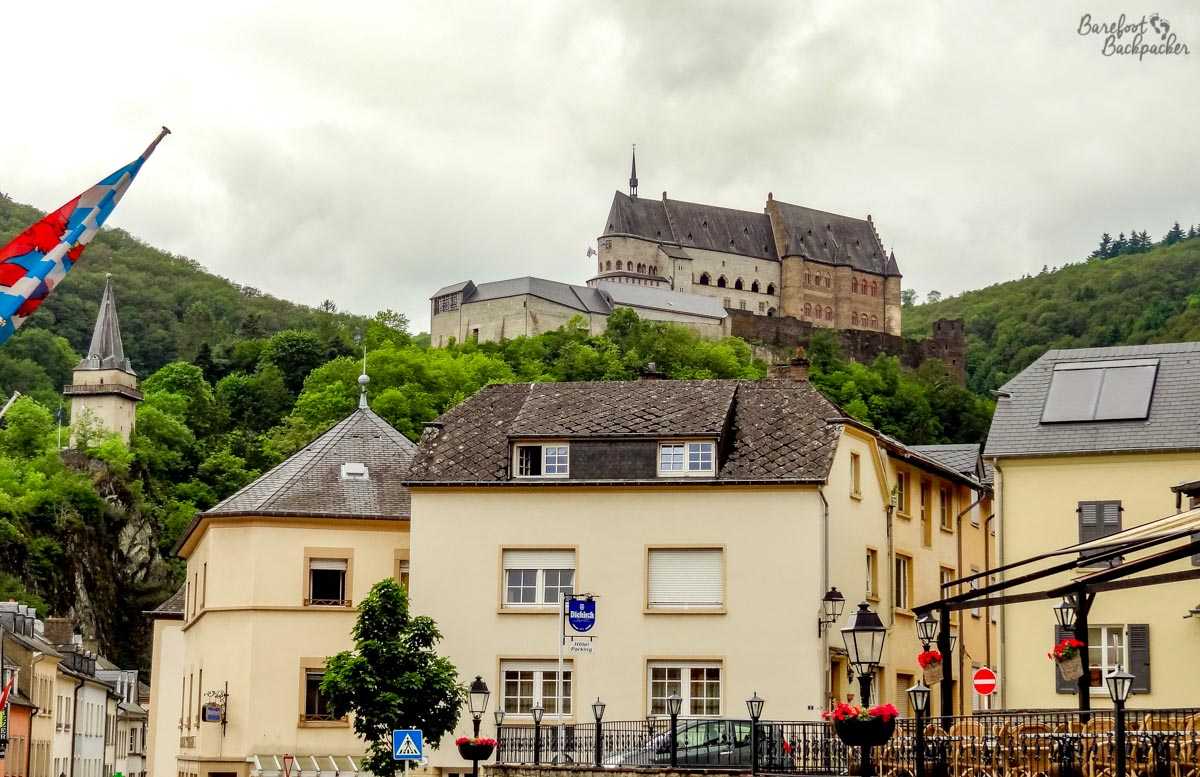 Vianden Castle, above the village.

One way to get there is to take the chairlift – exactly as it sounds; it’s a chair (or in fact more like a bench) attached to a wire that goes up and down the mountain. It’s very ‘open’, and it wiggles from side to side if you move. Safe as houses, obviously. It does give a fine view over the river valley and up towards the castle, but I’d imagine the views were better going ‘down’ as at least then you’re going in the right direction. 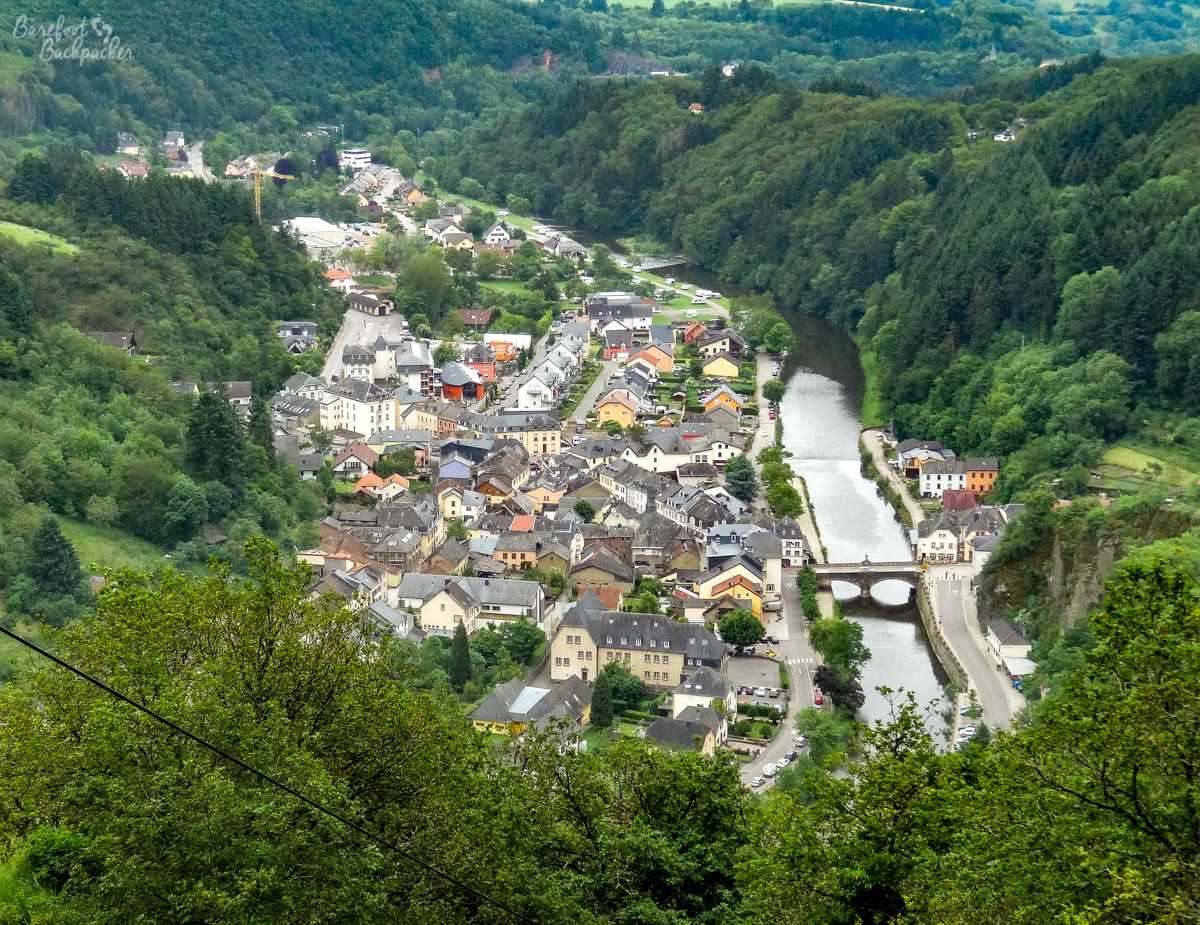 The town as seen from the chairlift. As is common with me and high places, there is mist affecting the view.

The castle itself is pretty old – there’s been a building here since late Roman times, and it’s been expanded and developed quite significantly over the years. It used to be one of the homes owned by the House of Nassau, one head of whom was William of Orange – victor of the last successful ‘invasion’ of England. However, in the years following the Napoleonic Wars, Vianden Castle was kind of ‘forgotten about’, eventually being sold essentially for scrap, and it lay in a state of disrepair until the 1970s, when a campaign was launched to renovate it. These days the castle is a museum; inside, you get to see the history of the castle (including a cut-away of a cross-section of ground where you can see the imprint left by some of the older walls), as well as a few of the rooms which have been displayed as they would have been when it was used as a royal house. You actually get to see quite a lot of the inside of the place, and you certainly get the impression of the richness and size of the place.

Vianden is also home to a small museum dedicated to Victor Hugo; this, along with a statue (by Rodin, no less) of the man himself, brings to mind the words ‘dead horse’ and ‘flogging’; apparently he lived in Vianden for a *few months*. It’s not even as if the town needs any bigger draws than the castle. That said, it’s apparently popular in summer with bikers, in the same way that many small country towns are (cf Matlock Bath in the UK). 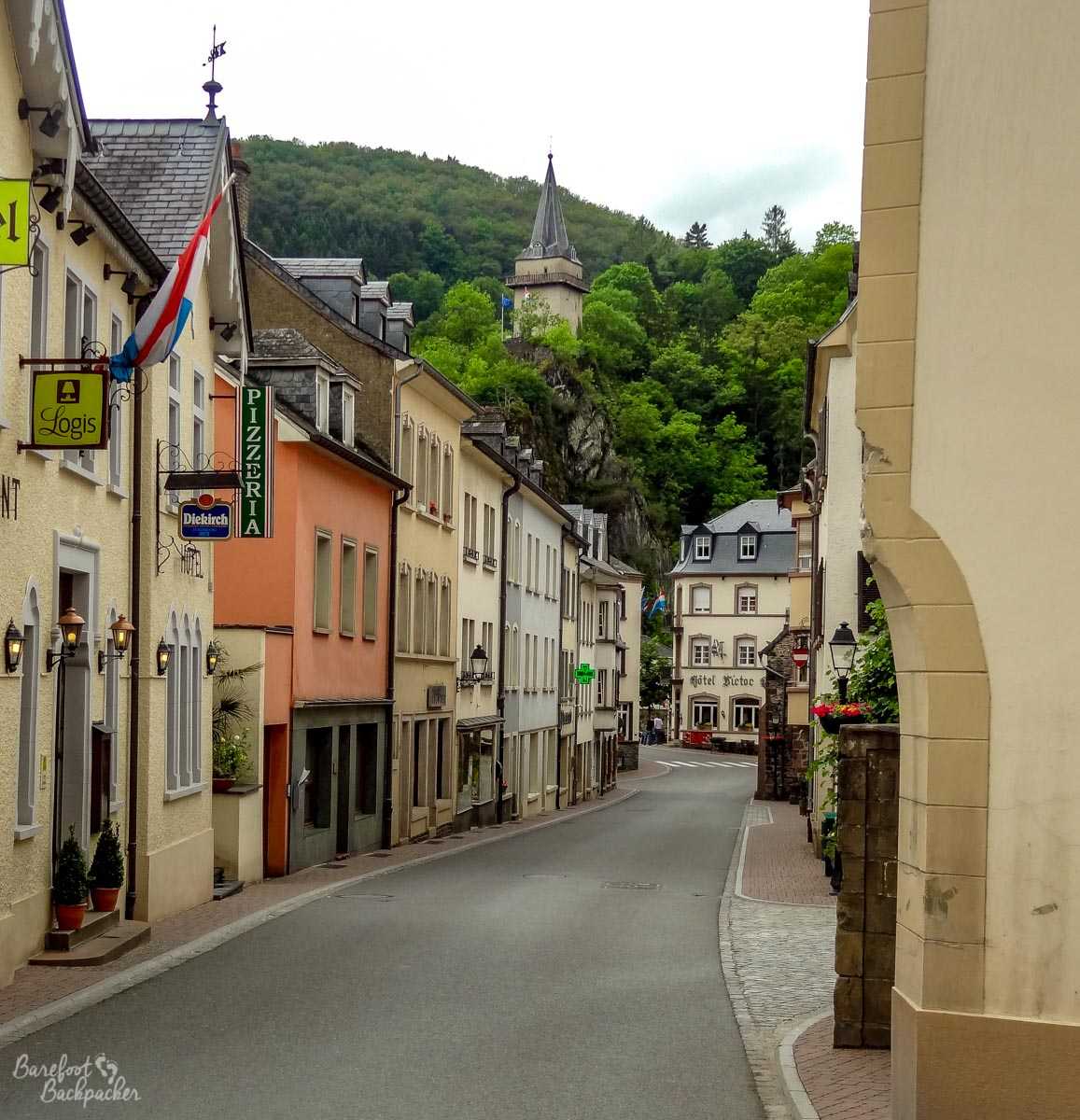 Street scene in Vianden. It really is quite a pretty little town.

Near Vianden is the town of Diekirch. The main draw here is the large military museum dedicated to the Battle of the Bulge towards the end of WW2. This part of Europe was scene of great fighting over the Winter of 1944-45; the Germans believed they could break the back of the Allied forces by splitting and surrounding them, which would lead to a peace deal, leaving them to concentrate on fighting the Soviet Union. They failed, although partly through the terrain and the weather as well as through Allied resistance (it was very snowy), although certainly Allied bloodymindedness helped (“Nuts”, indeed). The majority of the action on the Allied side came from American forces, and it was also notable for being pretty much the first conflict where African-American soldiers fought alongside white soldiers. 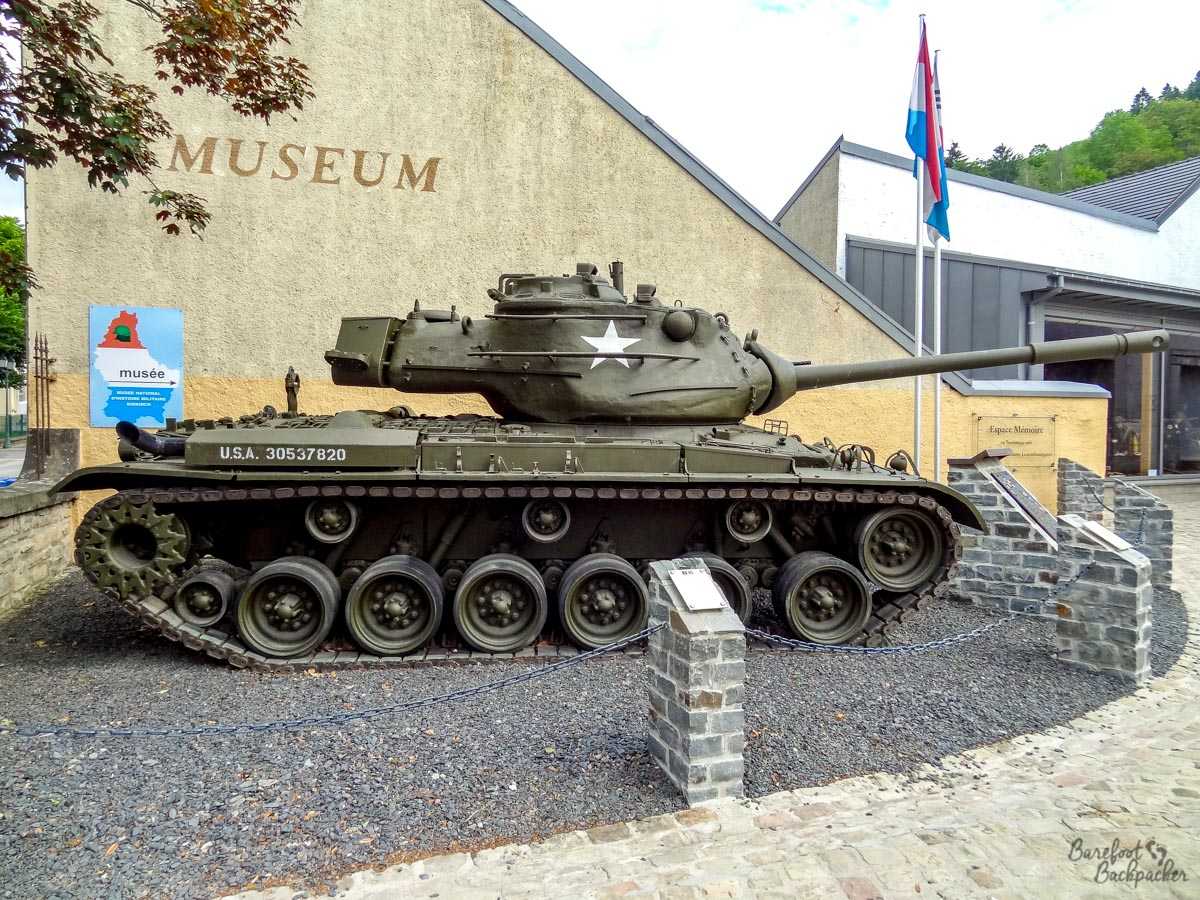 A replica tank outside the Battle of the Bulge Museum.

The museum was pretty intricate and full of detail, from all sides of the conflict but predominantly promoting the American line. Outside the museum were replicas of several vehicles used in the conflict (including a tank), and inside one of the larger rooms was filled with all manner of vehicles and machinery of the battle, for example army jeeps, motorbikes, missile-launchers, etc. 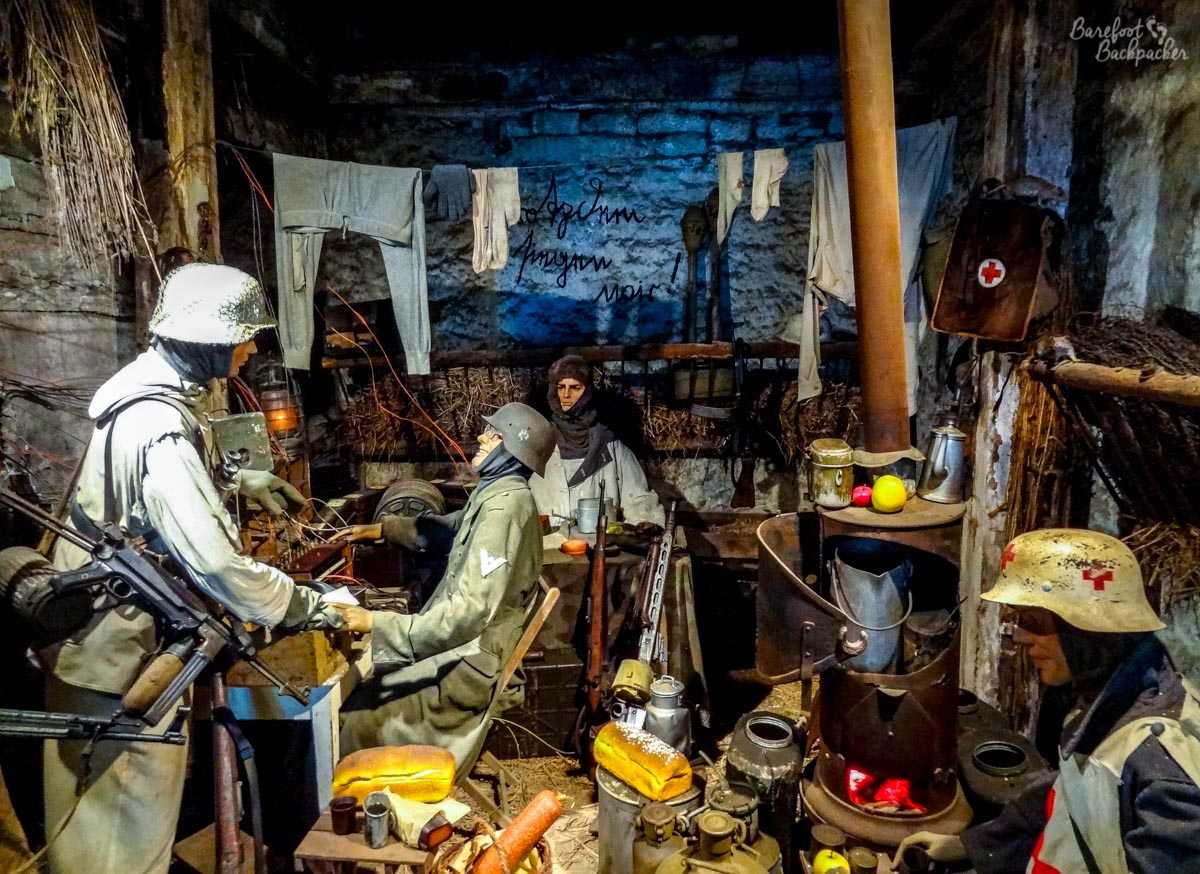 A replica of the ‘foxhole’ that the US soldiers would have been in during the battle.

Other rooms included a recreation of a German hideout, an overview on what had happened to the local population on the German’s original advance, and rooms with all manner of documentation and items from the period (adverts, newspaper clippings, personal effects, etc). Lots of detail, very thorough, but couldn’t help but feel I would get the best out of it if I were a generic patriotic American.

There’s quite a few other things in Northern Luxembourg, for example there’s a couple of castles near Larochette and Mersch, an old abbey at Echternach, and of course walking in the Luxembourg Ardennes forest and hills; alas I was only in the region for two days. 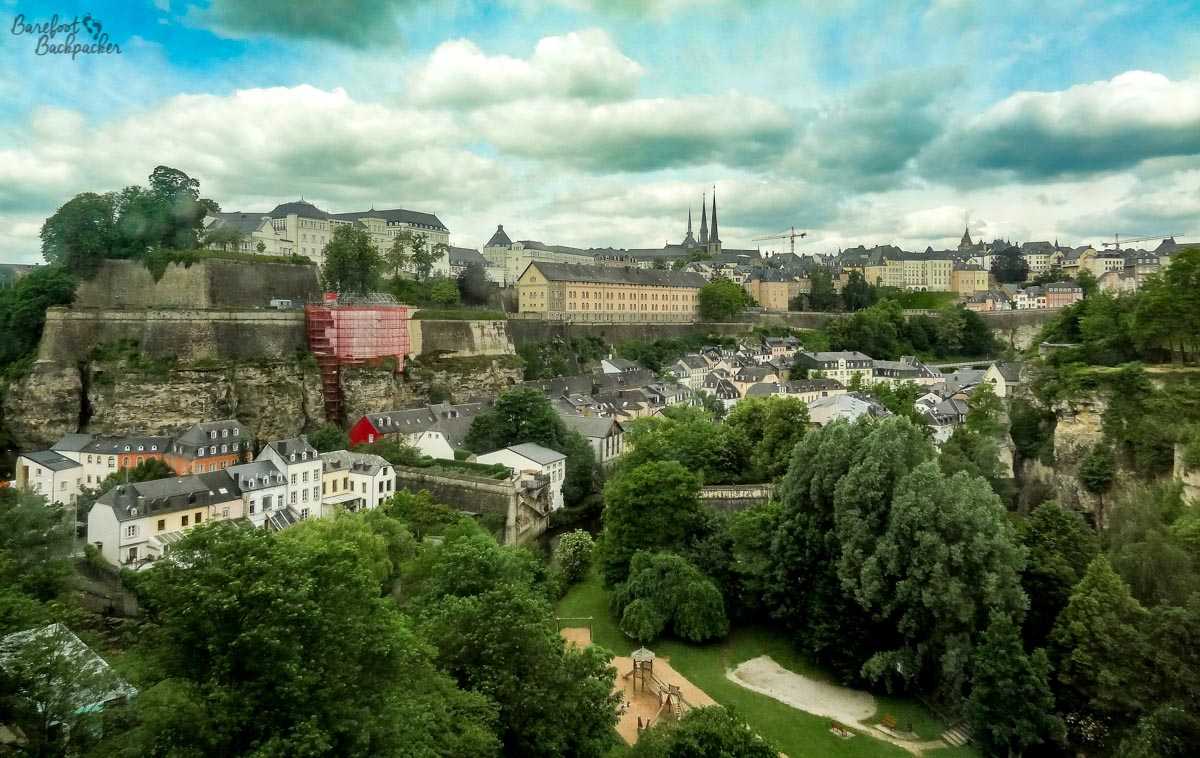 An overview of Luxembourg City.

Luxembourg City is an hour or so by train south of Diekirch, and the journey in takes you on a viaduct providing great views over the city. Unofficially, one can divide the city into several ‘segments’; the area around the station is separate from the main city centre by a very steep river valley (the small Petrusse River), in which are parklands, walks, and some buildings. On the other side of the old ramparts to the East, heading down towards the valley, is an area of quiet cobbled streets and interesting cafés To the North-East, over the Alzette River, lie the main bulk of the banking offices and the other parts of the European Parliament. The Petrusse valley is very pretty indeed, as city centre river valleys go, and the remains of the fortifications provide some good views on the other side. 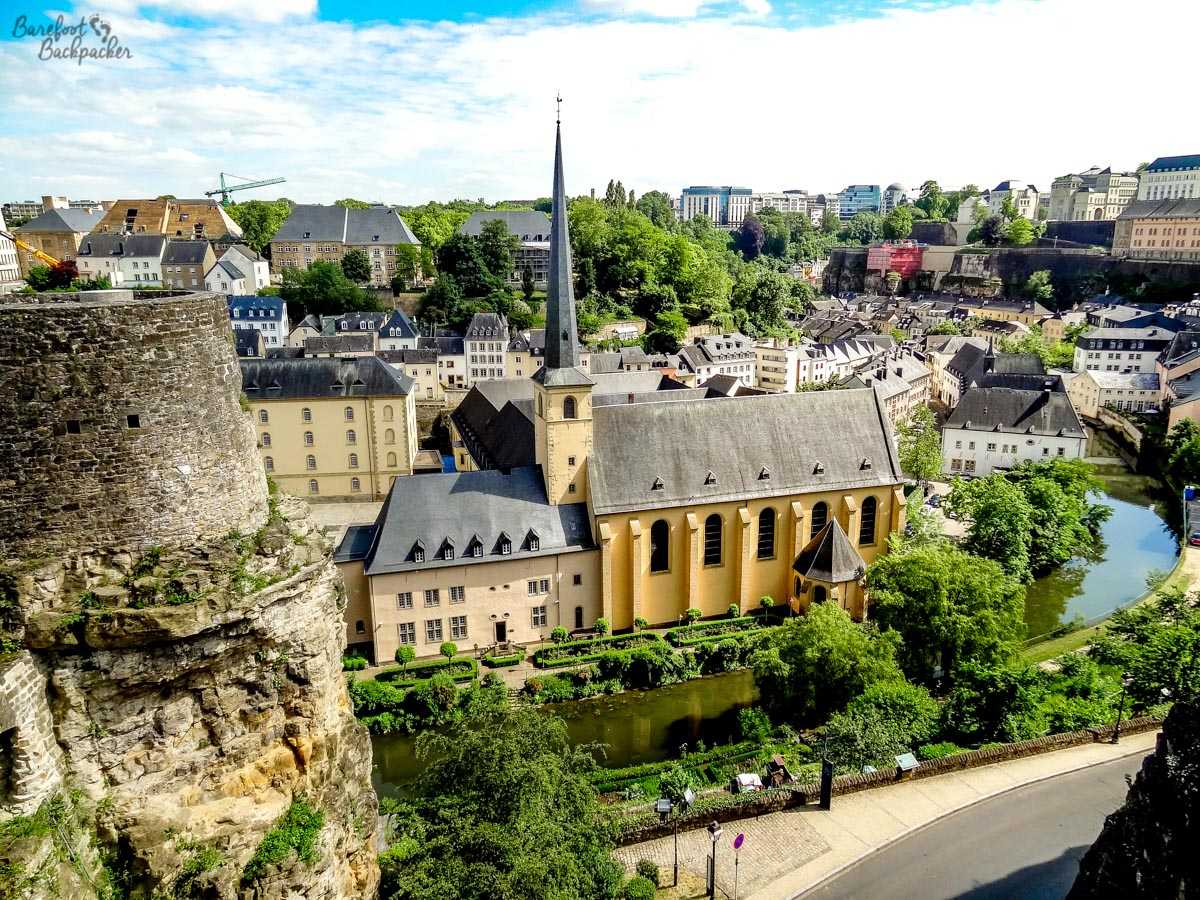 One stereotype of Luxembourg is true – it’s a very expensive country. Despite staying in a dodgy hotel in the red-light district close to the railway station (as they often are), it was one of the most expensive places I’ve stayed outside of the UK, and on average, food and drink are more costly compared with neighbouring Belgium. However the locals don’t notice; it’s one of the richest countries in the world (it also has amongst the lowest-priced petrol in Europe – the French, Belgians, and Germans often cross the border purely to fill up!). While these days Luxembourg’s affluence is built on the finance industries, its wealth was originally created by iron and steel, and the offices of the largest steel companies in the world are still in the city centre. 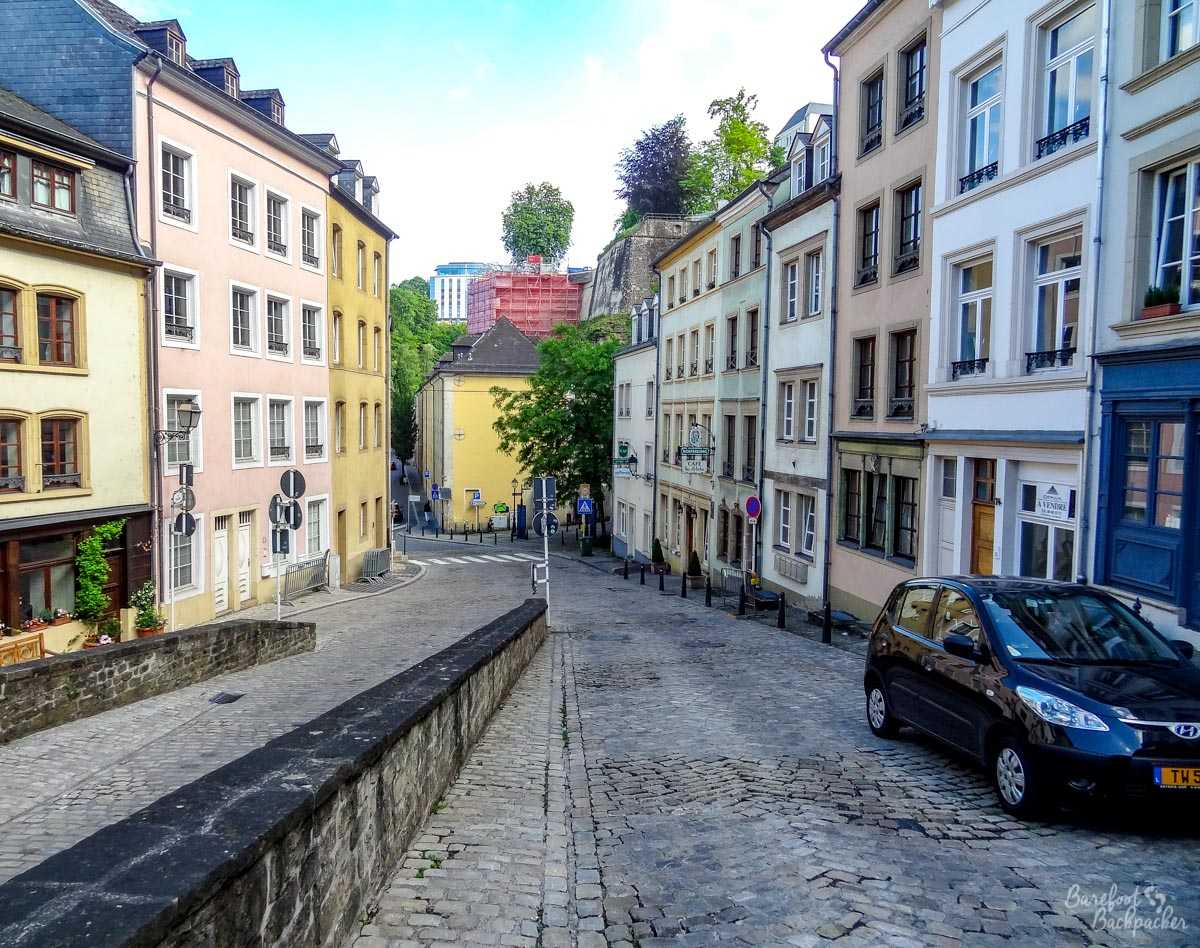 One of the pretty backstreets on the way down to the valley.

The city itself isn’t that big, although as it’s built overlooking the valley, it’s a little awkward to walk around due to topography. It’s one of the many ‘centres’ of the European Union, but even though the EU buildings are geographically close to the centre of the city, they feel quite a way outside, especially as you can see countryside in between. There’s a 45min hop-on/hop-off tour bus that goes around the city, past the EU buildings, and it’s probably a worthwhile investment. 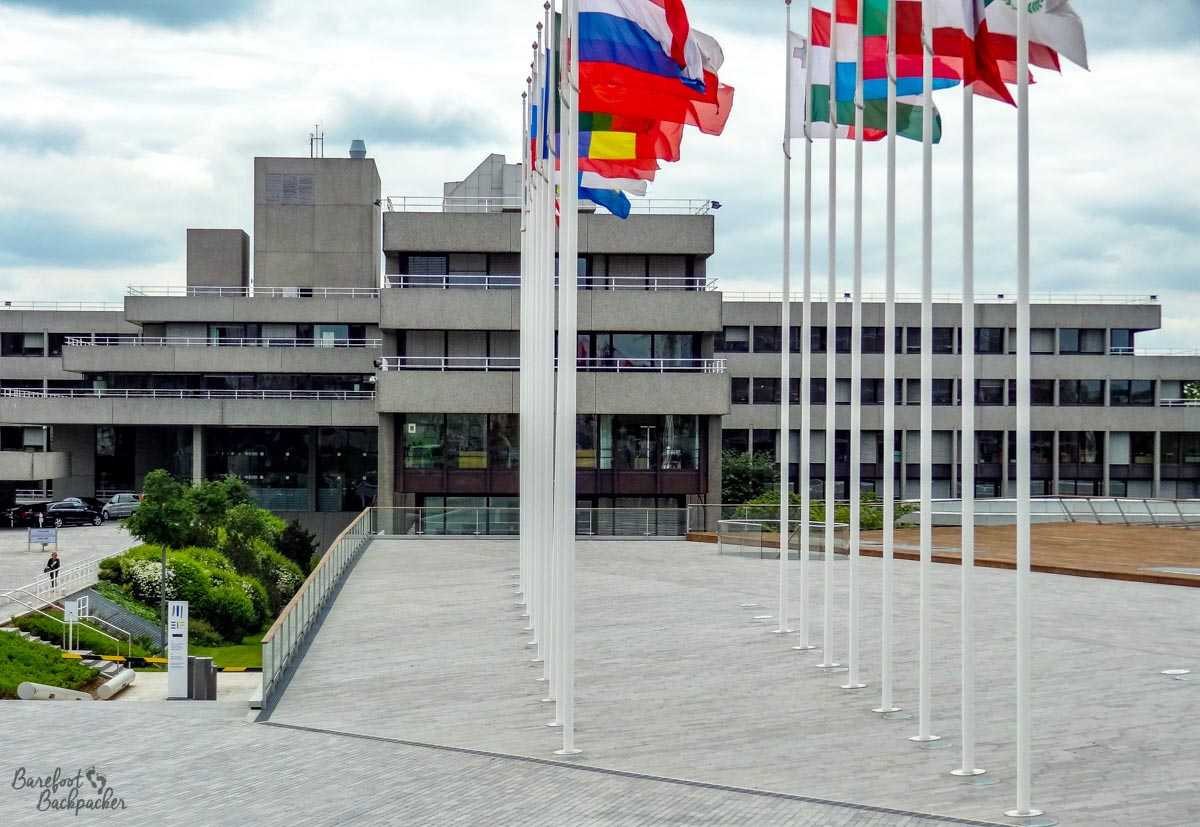 Taken from the top of the moving bus, hence why the tops of the flags are cut off, this is part of the EU complex.

One of the main attractions in the city is the MHNA – the National Museum of History and Art. It’s a somewhat weird building built over a remarkable 10 floors, though each floor in itself isn’t terribly large. It’s a mixture of history and art; the floors below ground level all deal with the history of the local area from prehistory to the Middle Ages (each floor is a different historical period). One of the highlights is an incredibly large and very well-preserved Roman mosaic that you can either walk around on one floor, or go to the next floor above and look down at it from above. The upper floors are mainly about art (mostly religious European art from the post-Renaissance era, but with some Modern Art too); on my visit the very top floor was a special exhibition about archaeology, but while it told you about archaeological practices, much of the historical stuff they talked about (Roman towns in Northern Luxembourg) was a rehash of what was on the lower floors (where they had, for example, a model recreation of several pre-Roman houses and buildings in a ‘town’). 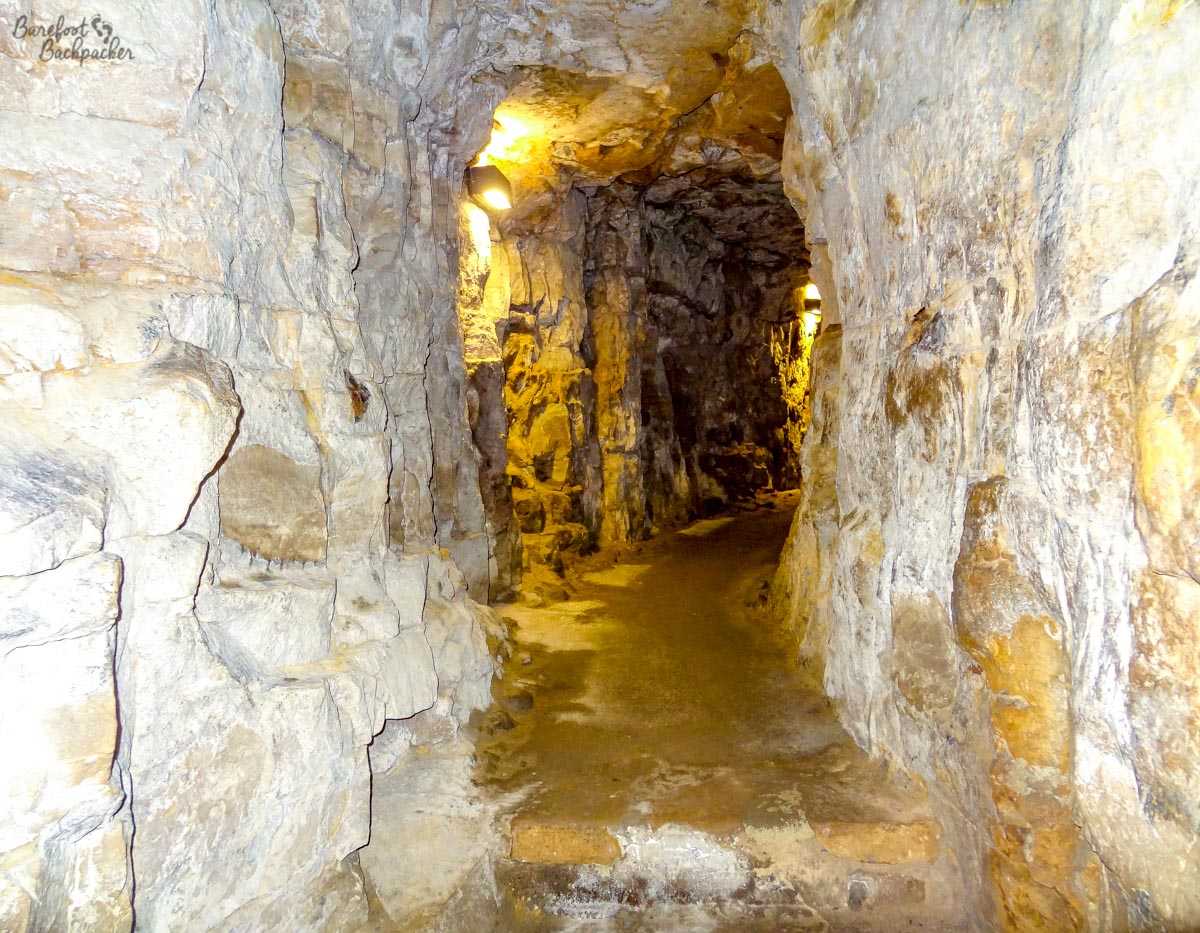 One of the passageways inside the ‘Bock’.

Elsewhere in the city are the old ramparts, and the ‘Bock’ – man-made caves under the rocks that the city is built on that have, over the years, been used for industry, storage, and, latterly, defence The fortifications were dismantled in 1867 as part of the peace treaty that led to Luxembourg being confirmed as an independent Duchy, but quite a lot of the caves were never filled in. Some of the passages inside the ‘Bock’ are quite wide, and cannons have been placed in the ends of cave passages that open out over the city, so you can look out and see what they would have fired at. 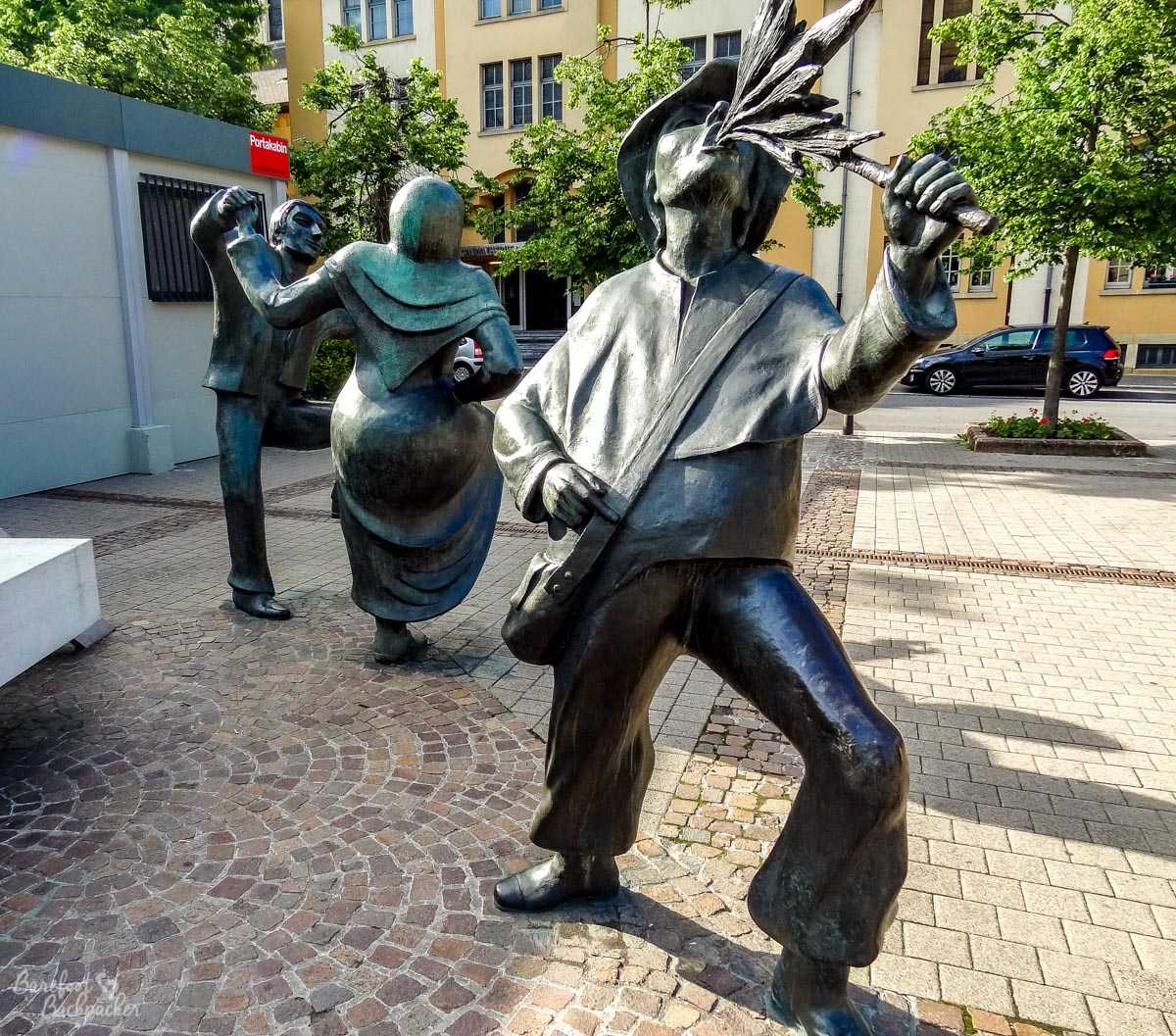 Part of a street sculpture of entertainers, musicians, and dancers in Place du Théâtre. I believe they represent old styles of entertainment, and is front of one of the old theatres in the city.

The city itself feels very ‘European’, with paved streets with cafe/bars, some street art (though not as much as Brussels!), and a fairly cosmopolitan vibe, but if I did feel ‘something’ there it was that it was quite a ‘busy’ city, not in terms of numbers but in terms of lifestyle; I got the impression it was a place people came to work, not to let their hair down and have fun. The bars lacked a little life, the streets a little atmosphere. 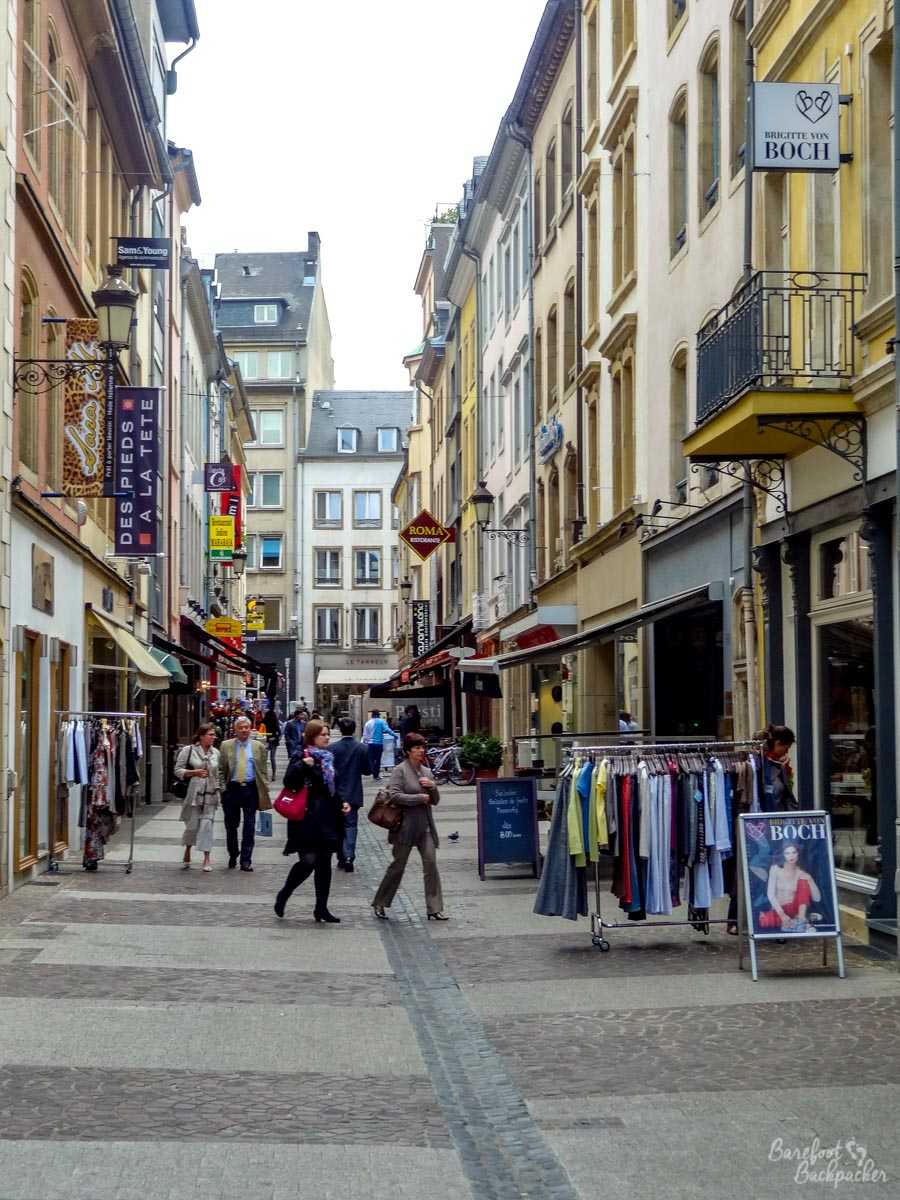 One of the main streets in the centre of the city, good for shopping at least.

Overall I think I liked the city, and would revisit, but it may not be a place I’d hurry back to immediately …