If you were asked to list the nicest beaches in Europe, you’d probably stick with the Med, the west coast of France, and the Bulgarian Black Sea coast.  It’s unlikely many beaches in the UK would make the list, and even if they did they’d be concentrated in places like Dorset. 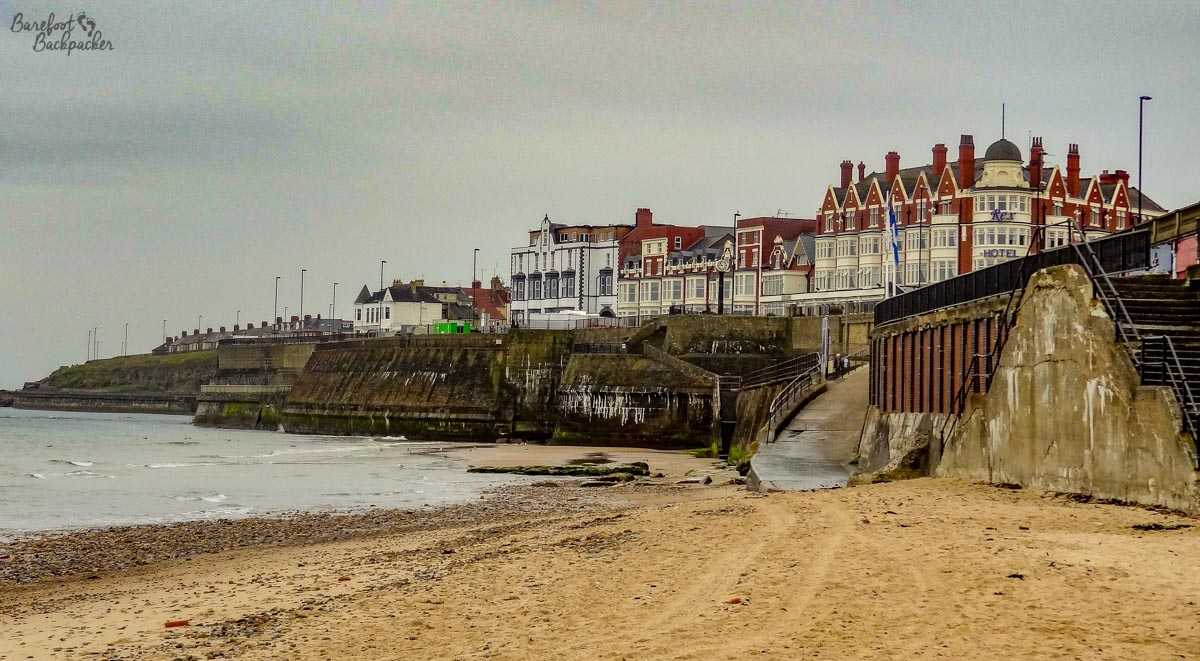 The beach at Whitley Bay, on an August Bank Holiday. It should be full of people. It … isn’t!

It is a foolhardy adventurer who braves the sands of Northumberland; even in the height of Summer you’re not guaranteed, well, anything much. But they’re a hardy lot up here.  You may have seen fans of the football team Newcastle United, who are happy to stand watching a game with their shirts off, waving them around, even when playing away in Kiev. In November.  The beach stretches from Whitley Bay several kilometres South to Tynemouth, and on a warm sunny day it’s a nice walk, either on the sands & pebbles itself, or along the promenade.  Don’t forget to stop off at a chip shop along the way (Cullercoats, maybe) for a traditional English chippy lunch! 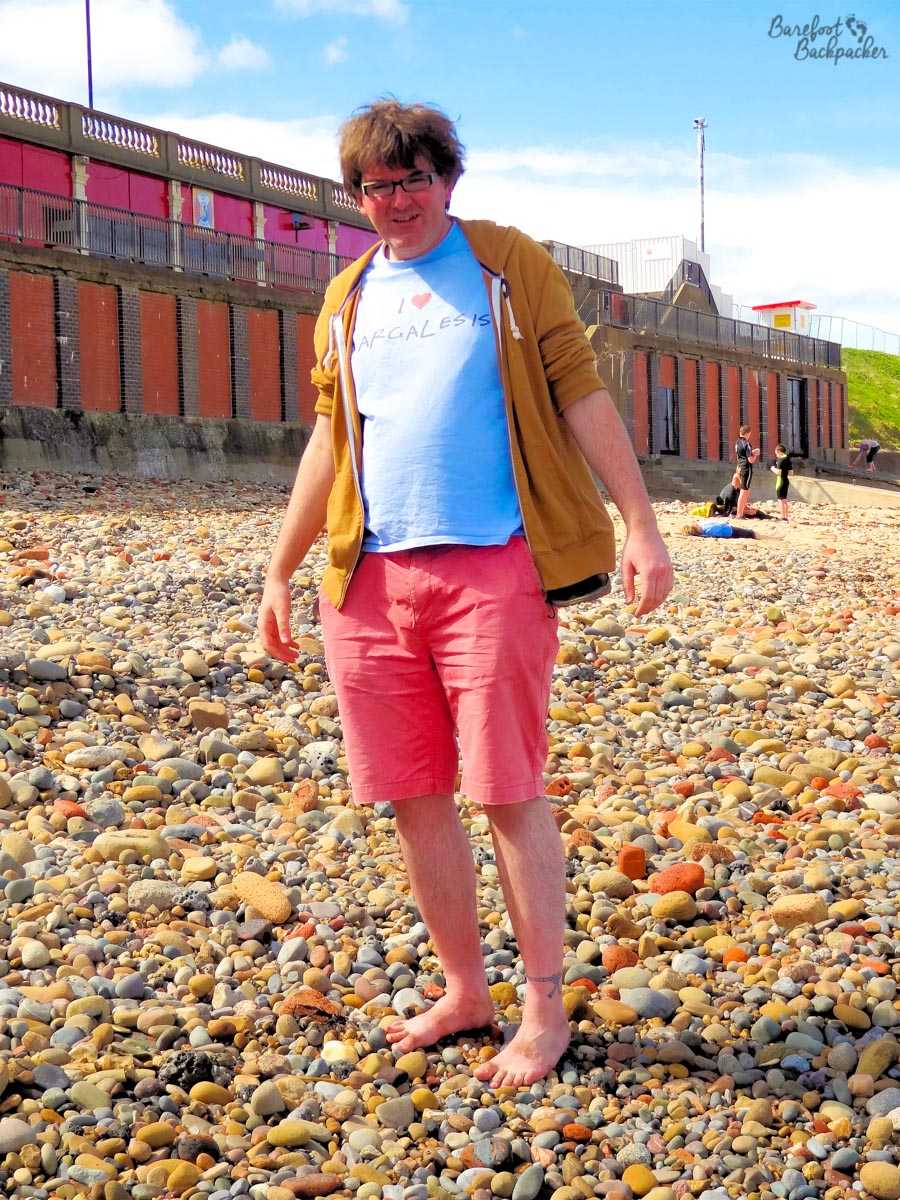 Another part of the beach at Whitley Bay, on a much sunnier day (May Day Bank Holiday). No, the pebbles weren’t painful …

Whitley Bay is a typical seaside resort; seafront views, amusement arcades, and ice-cream. Apart from a tradition of ice-hockey (were they one of the teams I used to watch on TV as a kid?), and some limited fishing (the bulk of the NE’s fishing industry is centred a bit further North in the Northumberland area, around Seahouses), it’s very much a place to go on a weekend and laze in the sunshine while children play with a ‘bucket and spade’.  Off-seafront there are some streets with large Victorian housing, and the old railway station (now part of the Newcastle Metro system) is quite an architectural marvel; it is a town very much of its time. 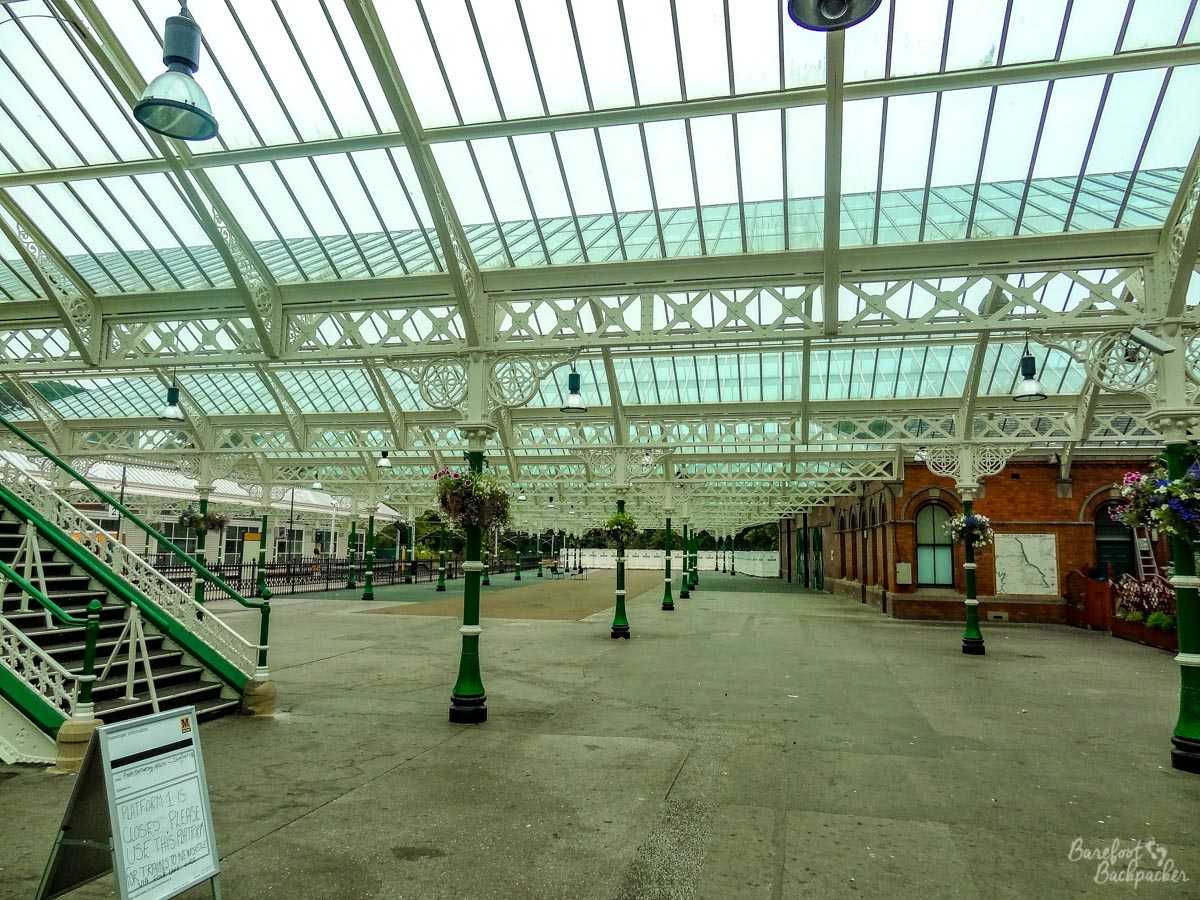 Tynemouth has a little more history to offer.  On a bleak but green cliffside at the edge of the town, overlooking where the River Tyne meets the North Sea, are the ruins of Tynemouth Priory and the associated Castle, an old fortification and gun battery. The priory was founded first, probably in the early 600s, and dedicated to St Oswin, who was buried there. Due to its location on an exposed cliff on the East Coast it became a regular target for Viking raids, so it had been pretty much abandoned by the mid 1000s. It was refounded, along with the building of a small castle, in the early days of the Norman Conquest, and remained in use until the Reformation. 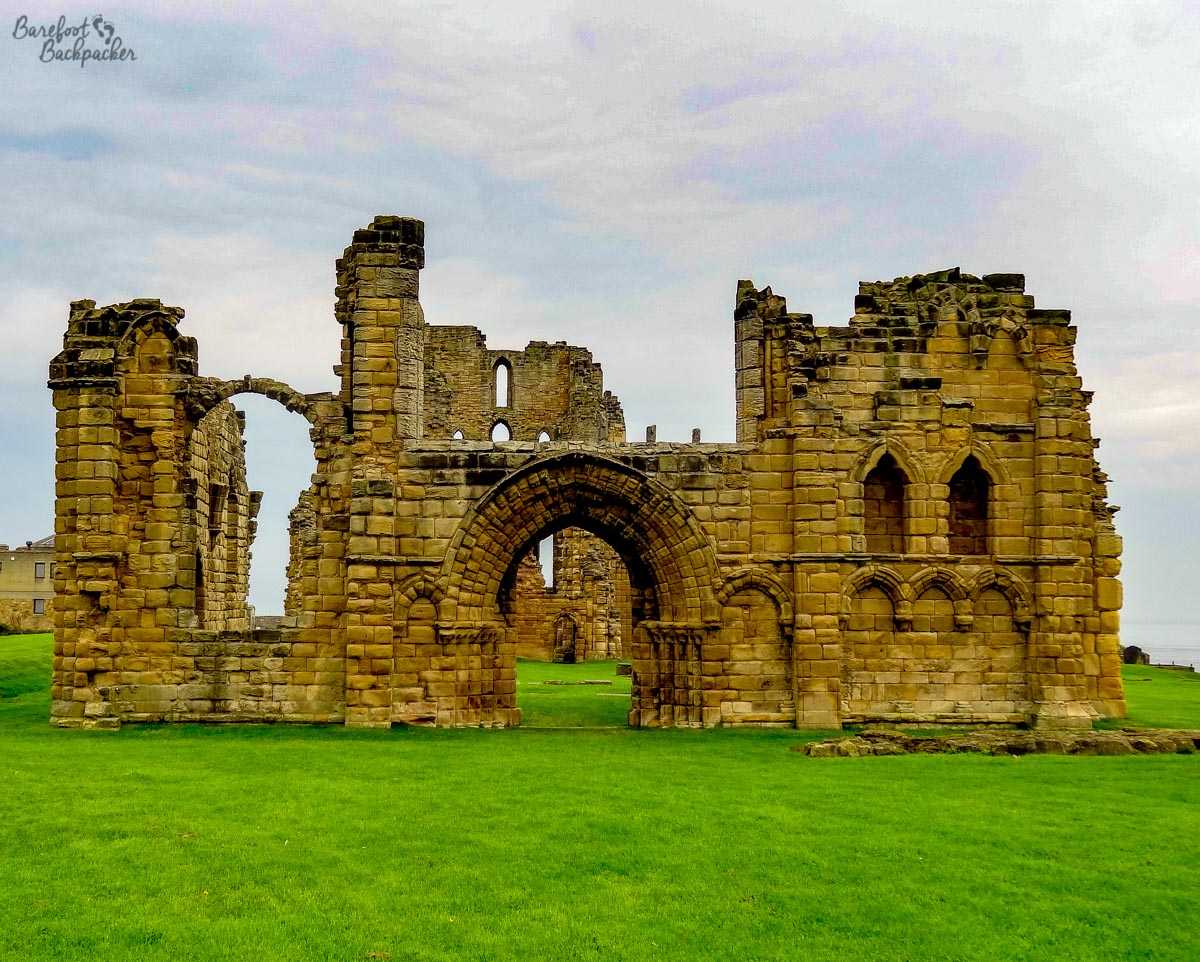 Part of the remains of Tynemouth Abbey.

The castle developed over time and remained fortified and garrisoned until at least the 1600s; indeed part of it was in use as a barracks until World War II. Additionally, artillery was installed on the ramparts to protect the Tyne (& Newcastle) from potential Nazi attacks. 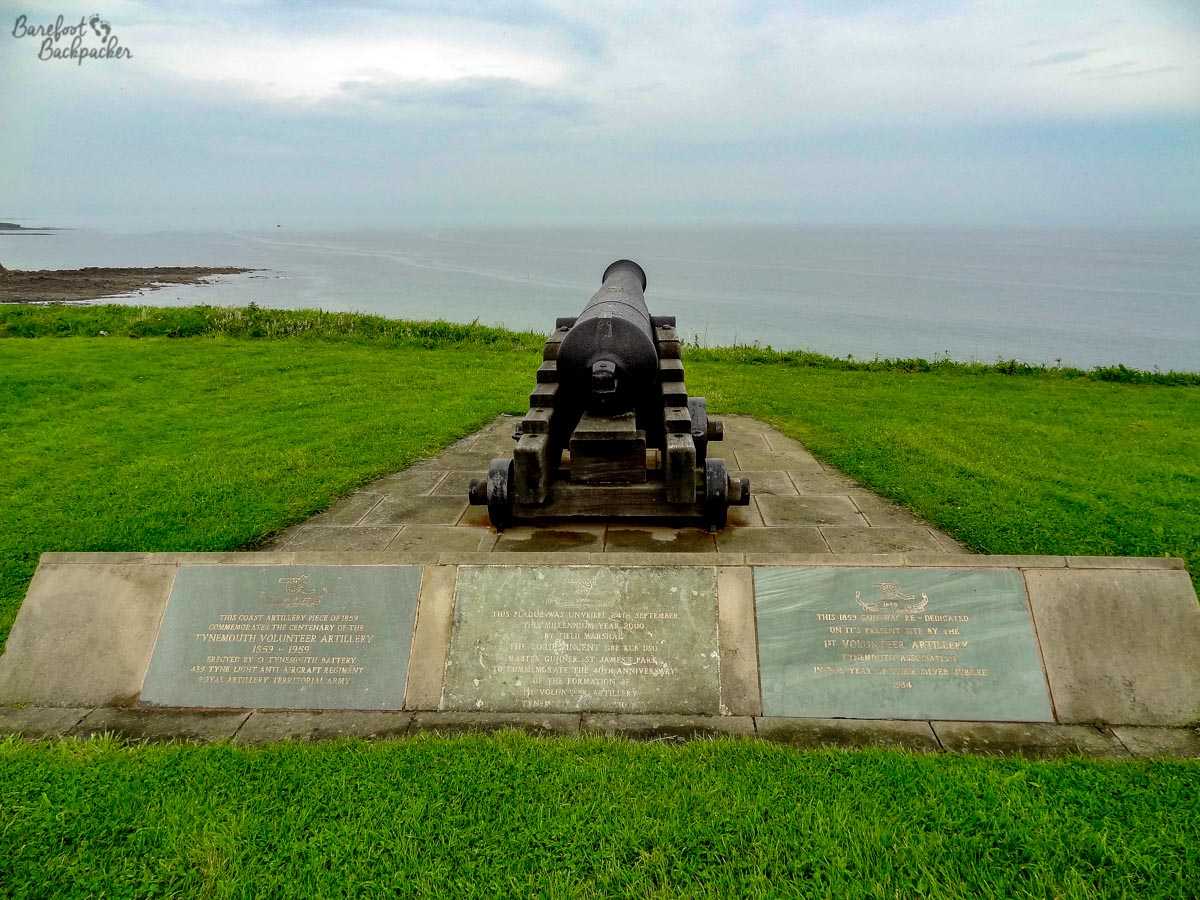 Gun platform outside Tynemouth Abbey, facing out towards the North Sea.

Near the ruins of the castle and priory is the town pier and lighthouse, designed as a kind of ‘breakwater’ to protect shipping in the mouth of the Tyne from the ravages of the sea. Overlooking it, on the hillside above the Tyne, is a monument dedicated to local naval hero Lord Collingwood, who succeeded Lord Nelson after the latter’s death towards the end of the Battle of Trafalgar in 1805. He seems to have been well-regarded as a leader and commander (somewhat rare in the navy in those times, I’d warrant), and was noted for his quite progressive views. Around the monument are cannon taken directly from the ship under his command at Trafalgar (The Royal Sovereign). 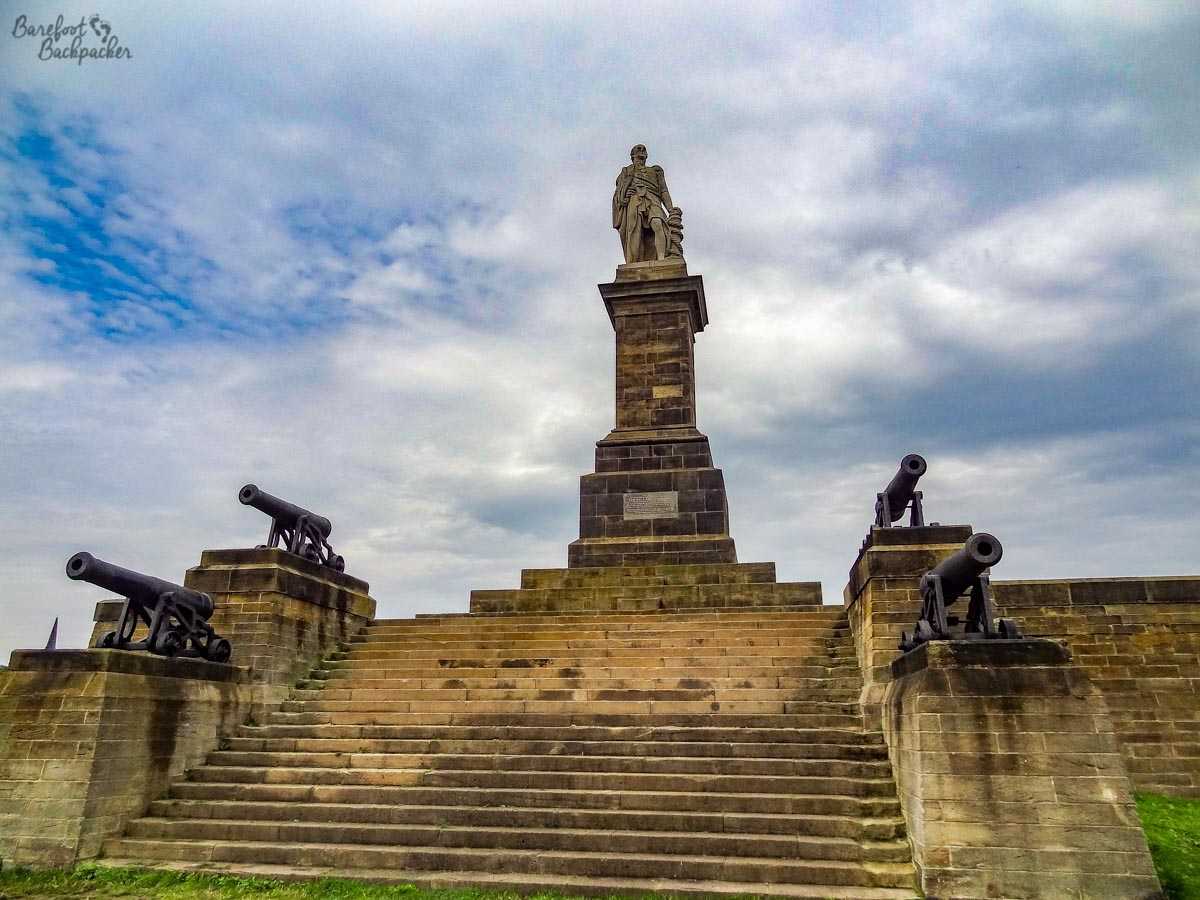 The monument to Lord Collingwood, local naval hero of the Napoleonic War.

Nearby, a couple of miles inland, is the self-explanatory-named town of Wallsend. In days gone by it was the most significant settlement at the Eastern end of Hadrian’s Wall – the Roman frontier fortification and trading route that marked the Northern extent of Roman rule for much of their time in the distant province of Brittania. Although now merely a satellite town between Newcastle and the sea, it still plays up to this heritage; there’s a couple of Roman ruins in the area, plus the local metro station is one of the few in the world with dual signage in English and Latin … 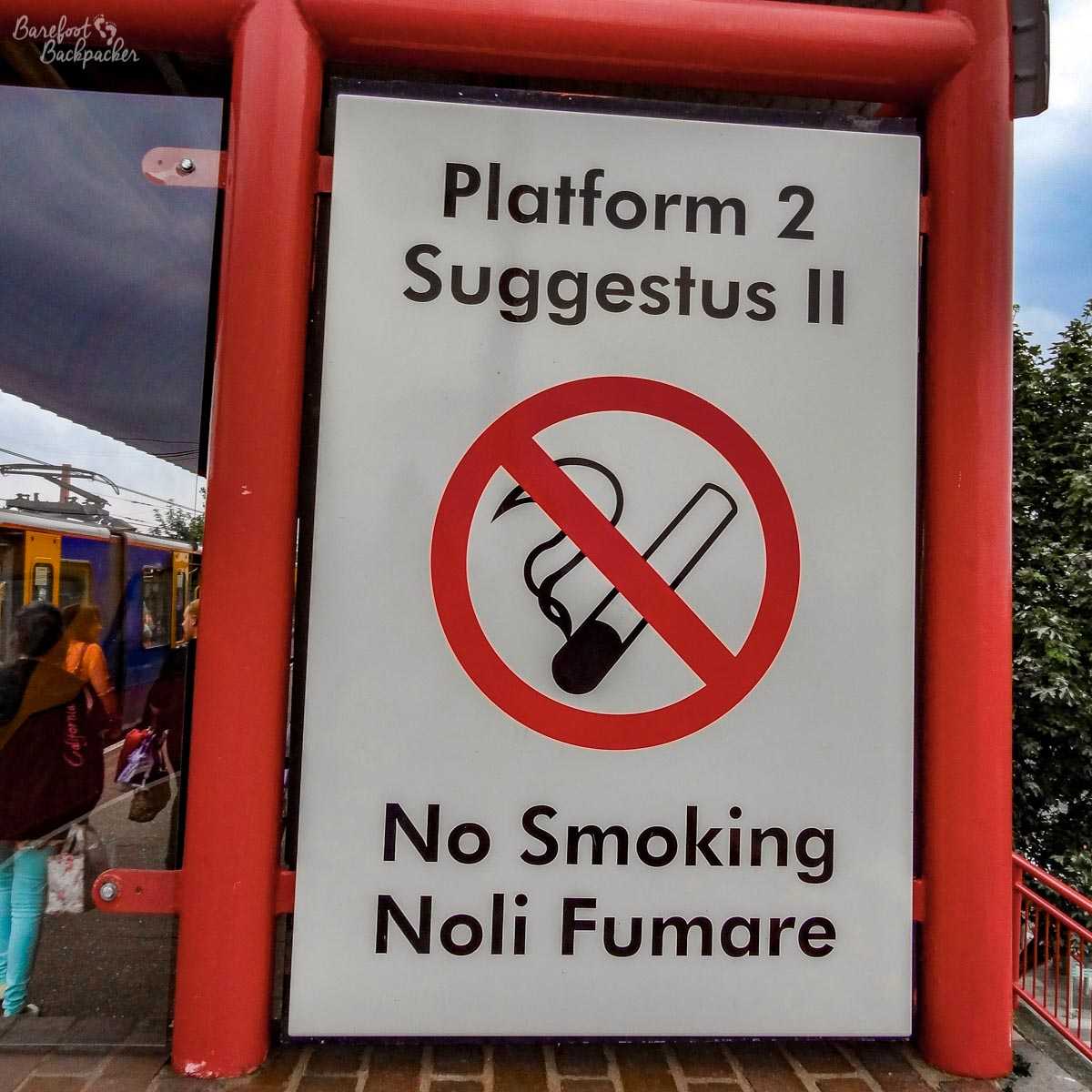 An information and warning sign on Wallsend Metro Station platform. 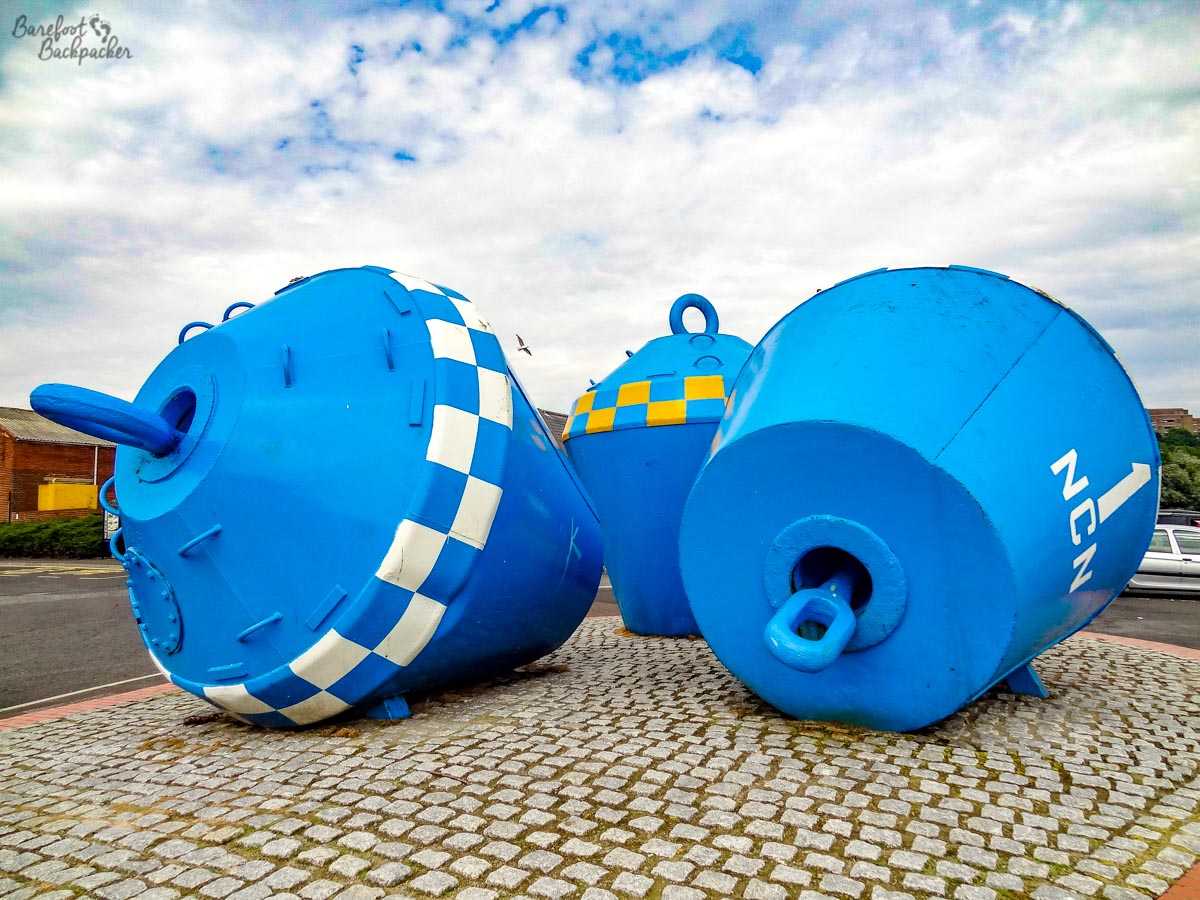 Artistic representations in North Shields of buoys, reflecting the fishing & maritime heritage. They also serve as ‘signposts’ for a long-distance cycle path.

The River Tyne (origin of name unknown) is of course the iconic feature of this area; indeed the boroughs either side of the mouth of this great river are called ‘North Tyneside’ and ‘South Tyneside’. It’s around 120km long, and at the mouth it’s around 800m wide. 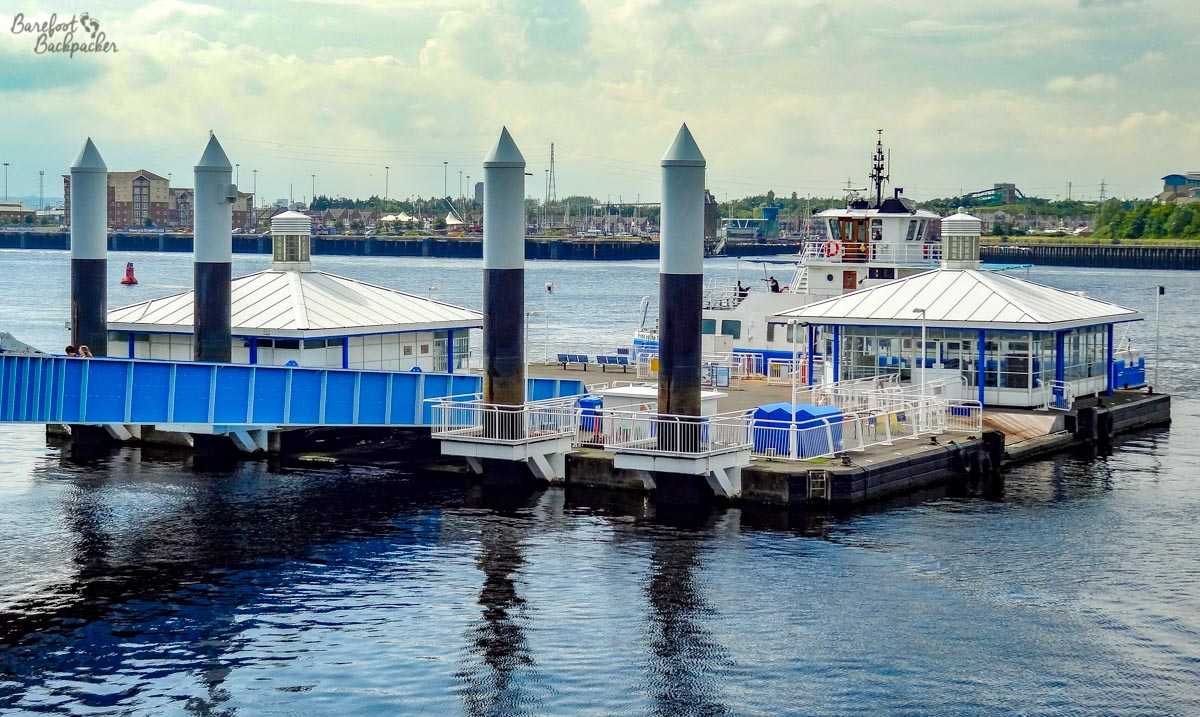 The ferry that sails across the Tyne, between North and South Shields.

There is a small but regular ferry service across it, linking the towns of North and South Shields. ‘Shields’ in this case refers to ‘temporary sheds’, probably used by fishermen, and certainly the area has had a strong seafaring past, but while North Shields, having been originally founded as the ‘port’ serving Tynemouth, is now nothing more than a residential overspill between Wallsend and Tynemouth, South Shields is a separate, buzzing, independent town. The comedian Sarah Millican insists that the world’s greatest fish-and-chips is sold here, although one suspects the residents of Whitley Bay would beg to differ on that point! 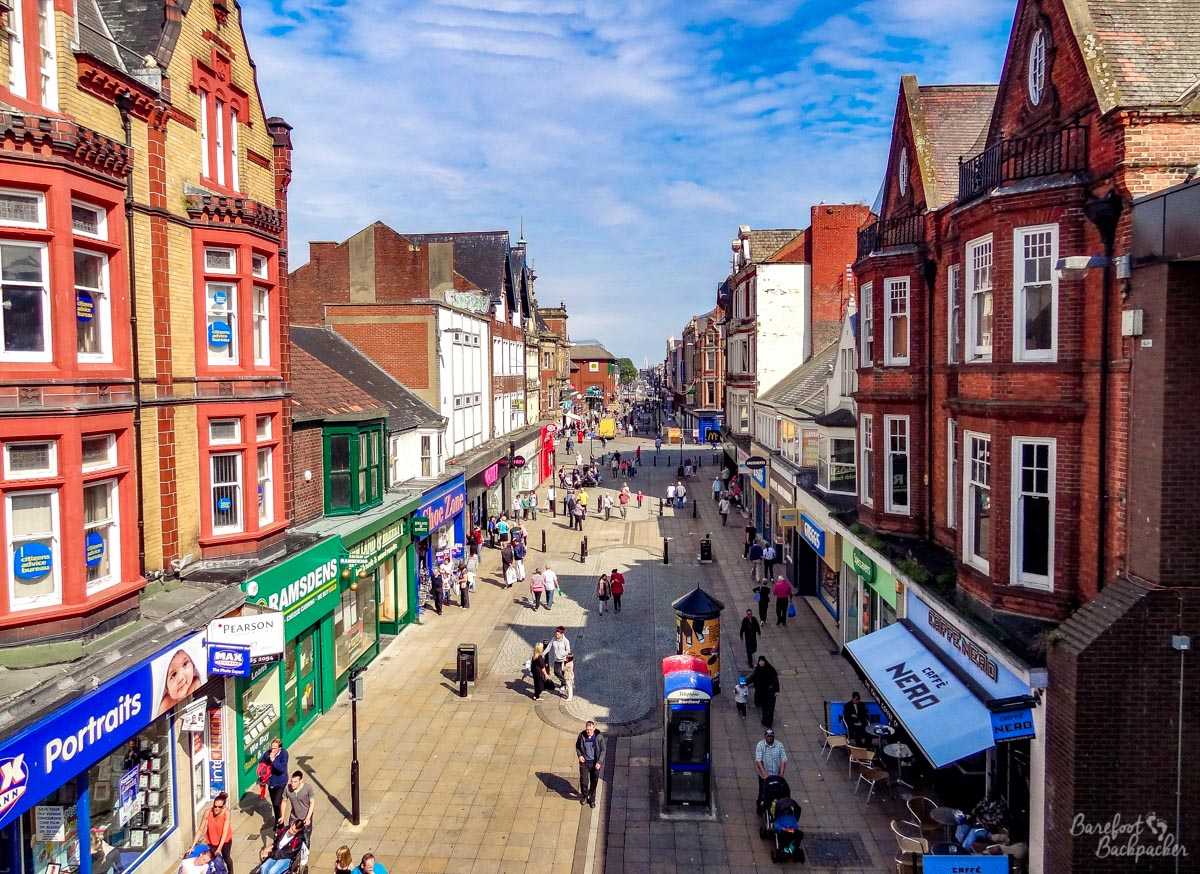 The coastline South of South Shields, heading down to Hartlepool and Middlesbrough, are spectacular cliffs and small mining villages (Seaham, Easington, etc); stuck somewhere between the rural idyllic life and the deprivation of the post-industrial North, places with so much potential but seemingly very little ‘drive’; the closure of the coal mines in the 80s hit these places hard and despite their location and beauty, seem to have been passed by by the hordes of tourists heading North. 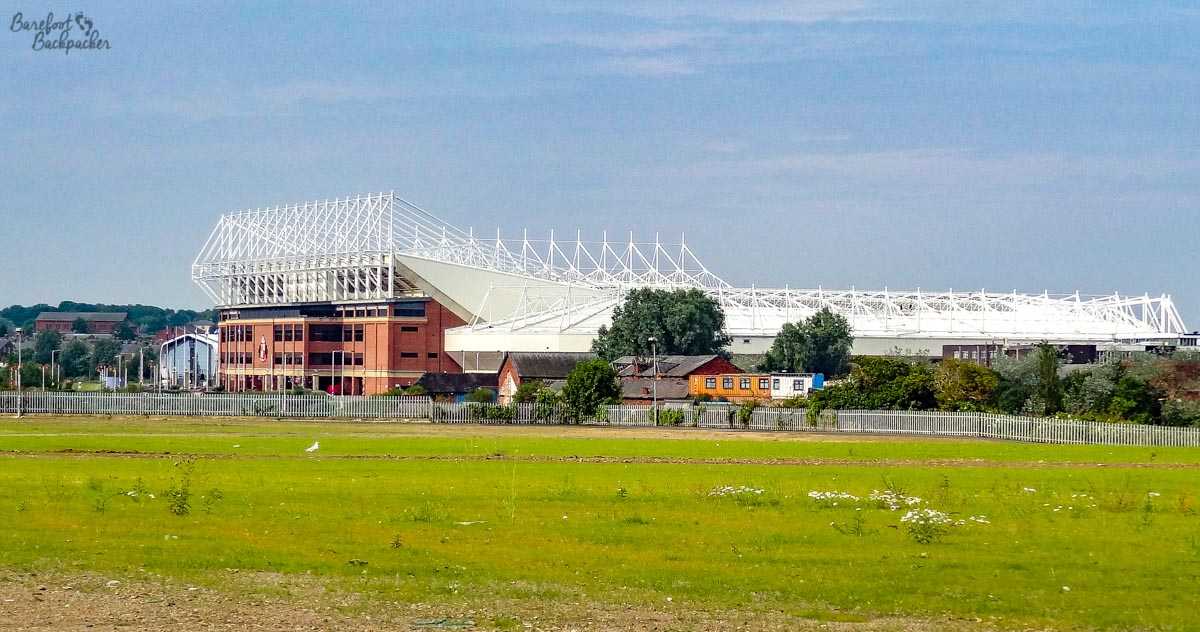 View across some derelict land from Sunderland Town Centre, towards the new football stadium (The Stadium Of Light, opened 1997).

The main town in the area is Sunderland.  Although very much in Newcastle’s shadow, it is a separate town with a very distinct history and culture – although with shared industries like shipbuilding and coalmining. It’s also not likely to be a town, sorry, city, on many tourist’s itineraries (it was given a city charter in 1992).
I wasn’t in the town terribly long (but long enough for a beer, natch!), as it was getting a bit late in the afternoon, so I missed out on the art gallery and the Winter Gardens.  I did pass by the main church – St Michaels & All Saints, also known as Sunderland Minster. There’s been a church on the site for around 1,000 years, but the current building dates from the early 1900s (due to mining subsidence). 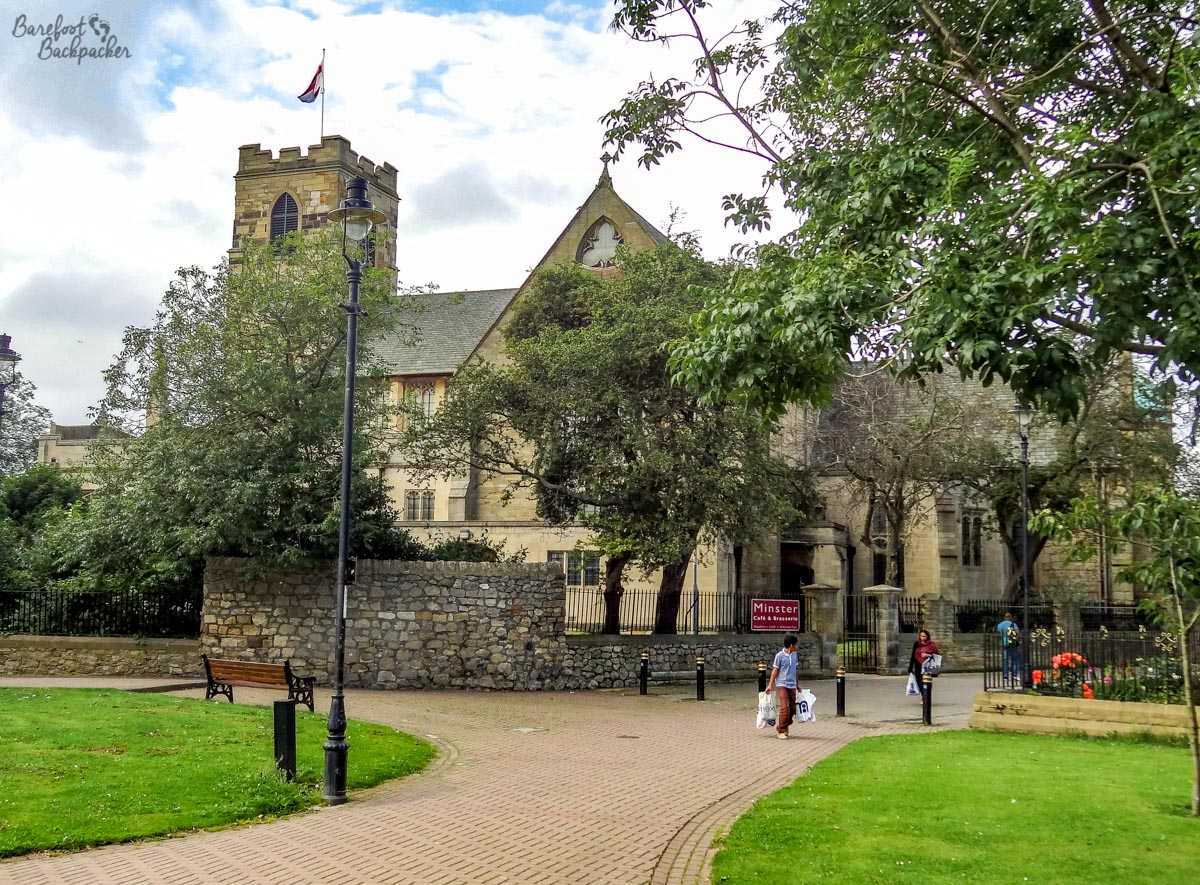 While not a particularly bad city, it does feel a little like it’s at the ‘end of the line’ – it is overly-dominated by nearby Newcastle/Gateshead, and there’s not many significant settlements South of here until you reach Hartlepool and Wearside. Still, it was a suitable place to end my adventure. In a pub. Obviously … 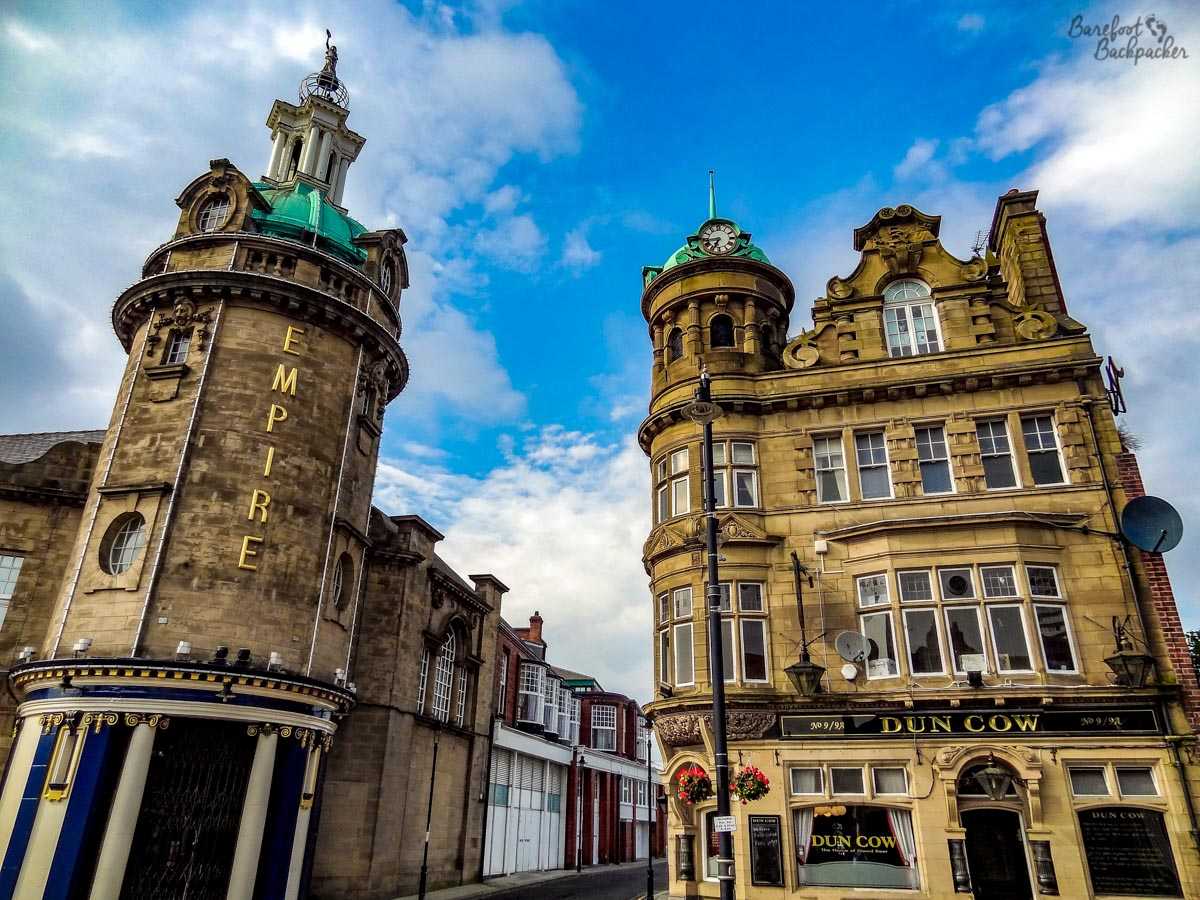 The Dun Cow pub and Sunderland Empire Theatre. The pub has a plaque commemorating Richie Cooney, “cad”, “philanderer”, and “the most grumpiest [sic] pub manager Sunderland, nay the North-East, has ever known”. 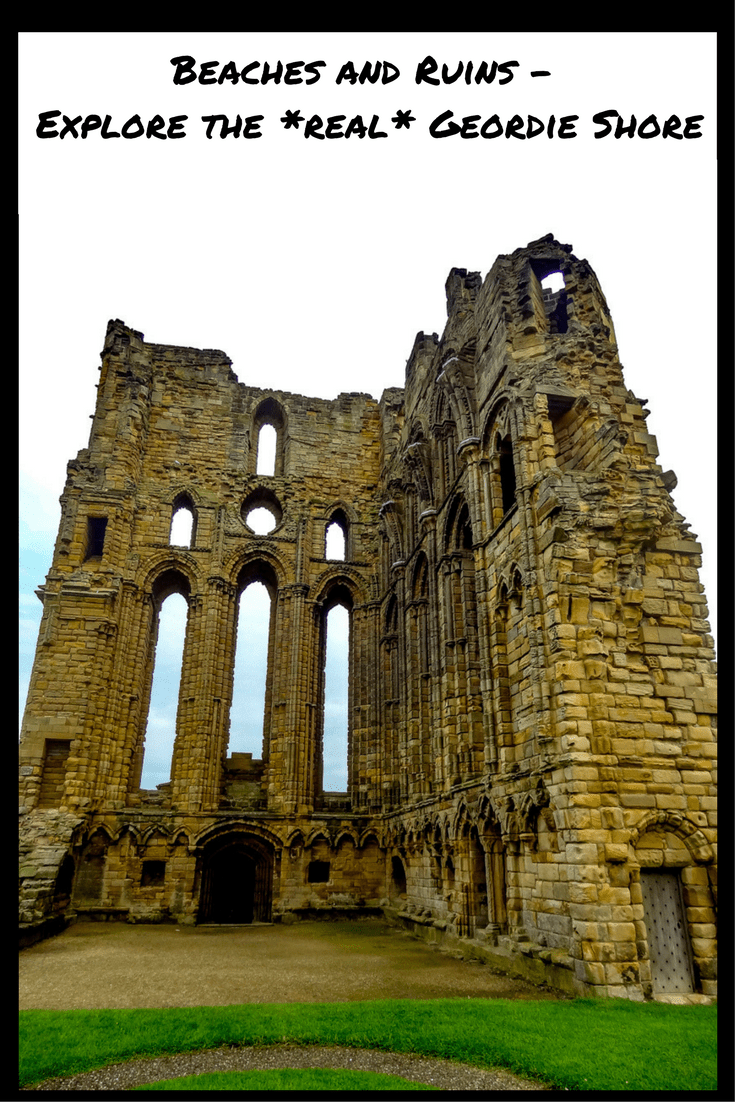