Leicester. One of those British cities (and I class Bristol in the same category) which to me … just ‘exist’. There’s nothing in my mind that makes them stand out, neither great nor damning, they just ‘are’ – places to pass through, to change trains at, maybe pop by for a quick drink somewhere more compelling. There’s nothing ‘bad’ about them, no reason to avoid them, just places that I’ve always found somewhere more interesting to visit instead. That Leicester is only just over an hour away from my house makes it all the more embarrassing that I’ve never really been there. These days it’s mostly famous for sport (leading clubs in both rugby union and football) and curries, but its legacy is much wider and older than that. 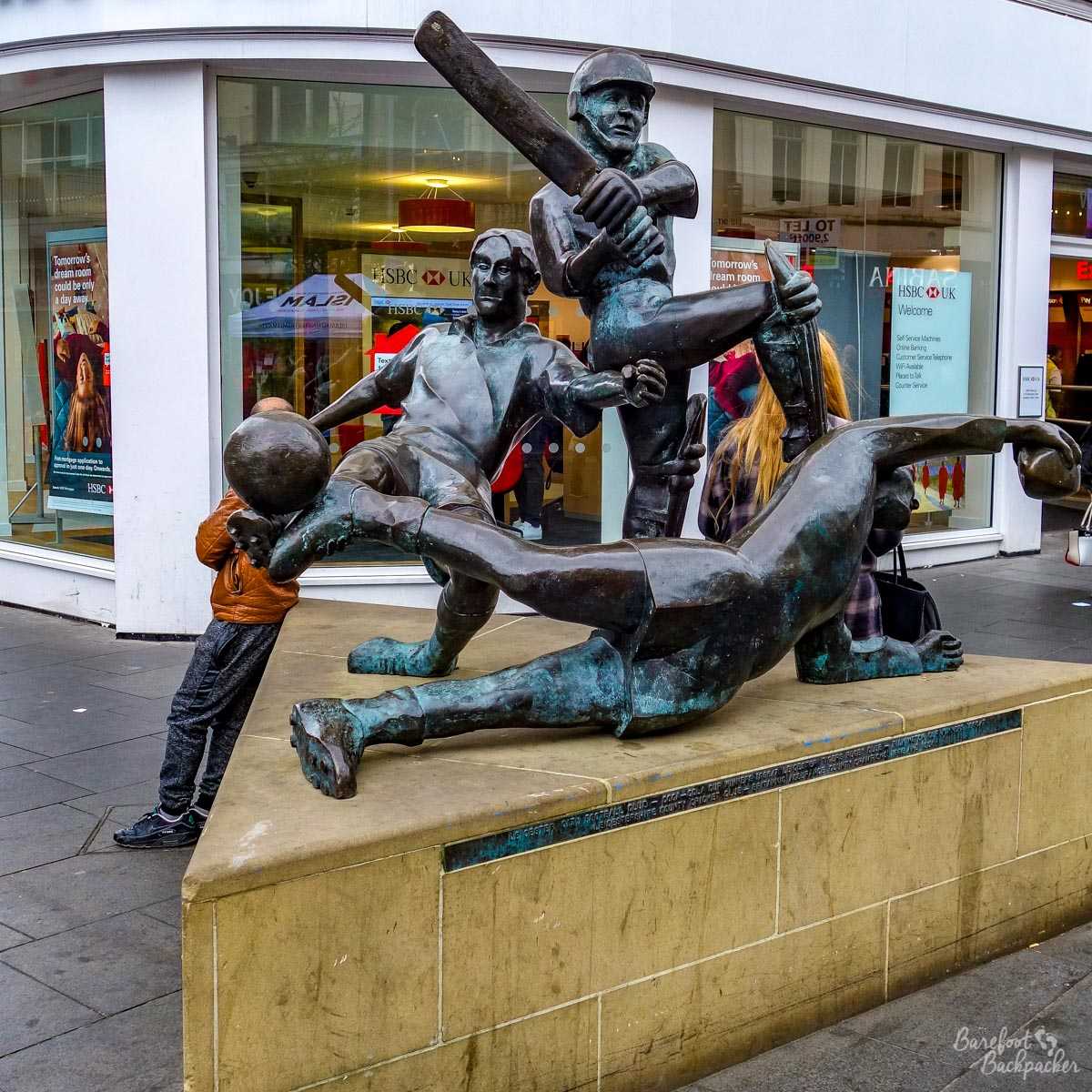 Monument in the centre of Leicester, celebrating the football, rugby union, and cricket teams. 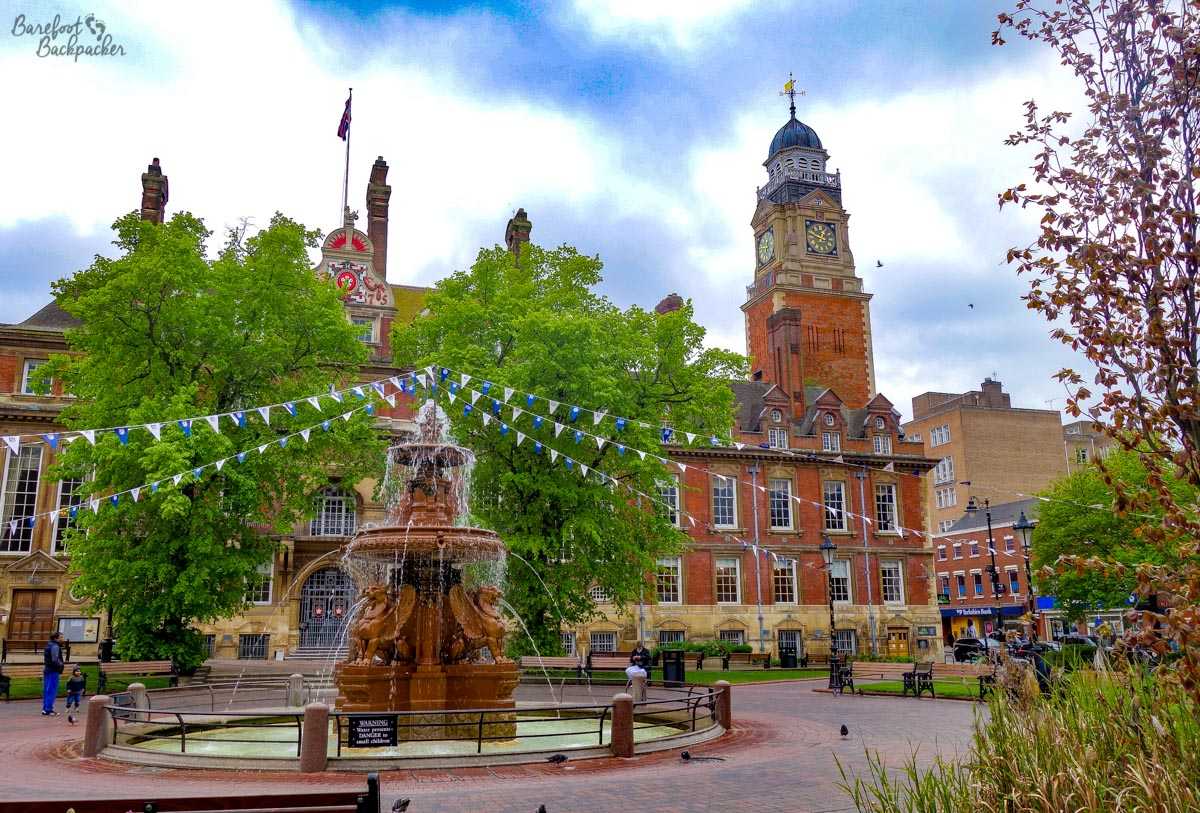 It’s a very old city, possibly amongst the oldest in the country. A notable settlement in Roman times, one of the ‘folk etymologies’ of the city’s name is that it’s a Latinised form of ‘Leir’s Camp’ – ‘Leir’ or ‘Lear’ being one of those mythical kings in pre-Roman Britain (and, like the more recent king with a connection to Leicester, Richard III, one of those kings whose reputation was ruined by Shakespeare). And indeed, one of the more interesting spots in the city is what is believed to be the largest remaining non-military Roman wall in the UK. That alone makes it worth a stop and look. It’s from a large public baths, probably built around 125AD – specifically it’s believed to be the wall of the associated gymnasium. Built at ground level in Roman times, it’s clear on visiting just how deep the Roman era is in the ground, as the cliff behind that drops from the current ground level is taller than the wall’s remains. 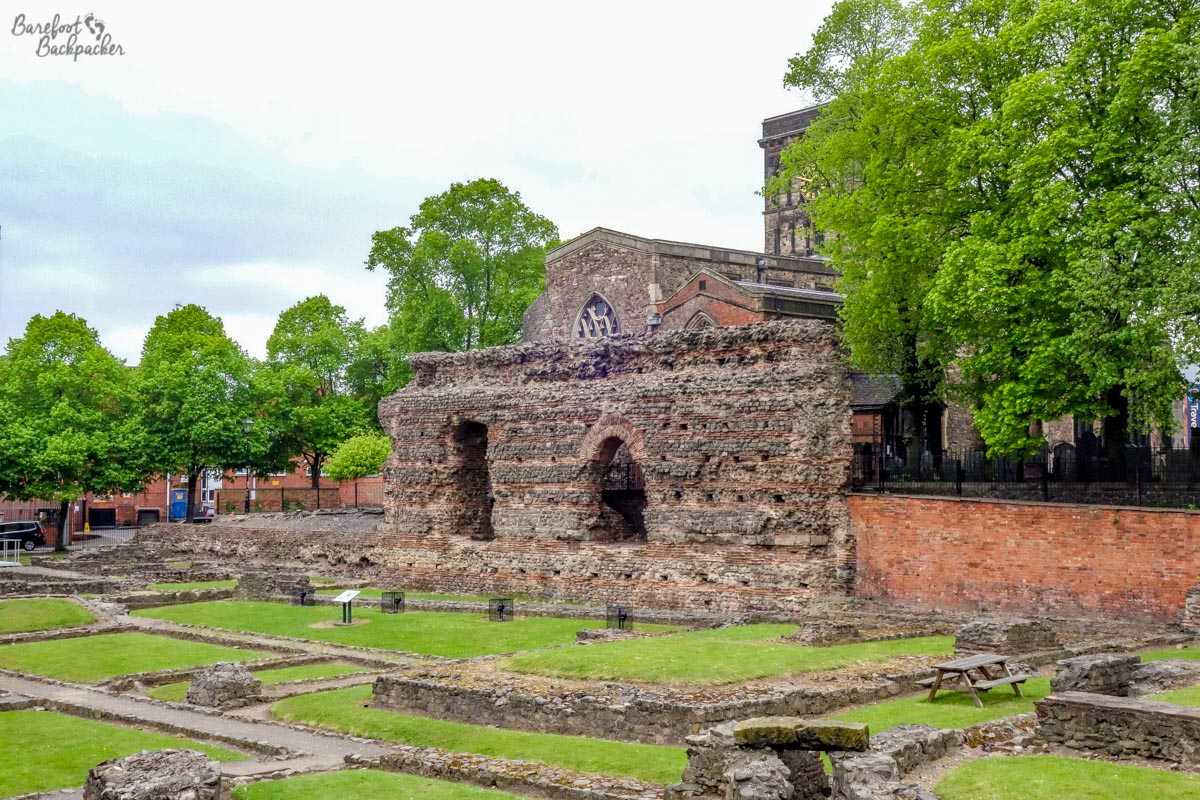 The Jewry Wall. Behind it stands the 9th Century Church of St Nicholas, constructed using some of the original Roman stonework from the baths.

The wall is known as the ‘Jewry Wall’. This isn’t anything to do with Jews (there was never a sizeable Jewish community in the city); rather the name is believed to either come from mediaeval judges (jurats) who met in the area, or from some corruption of the name of the Roman God Janus, a temple to whom the wall was originally thought to be part of. 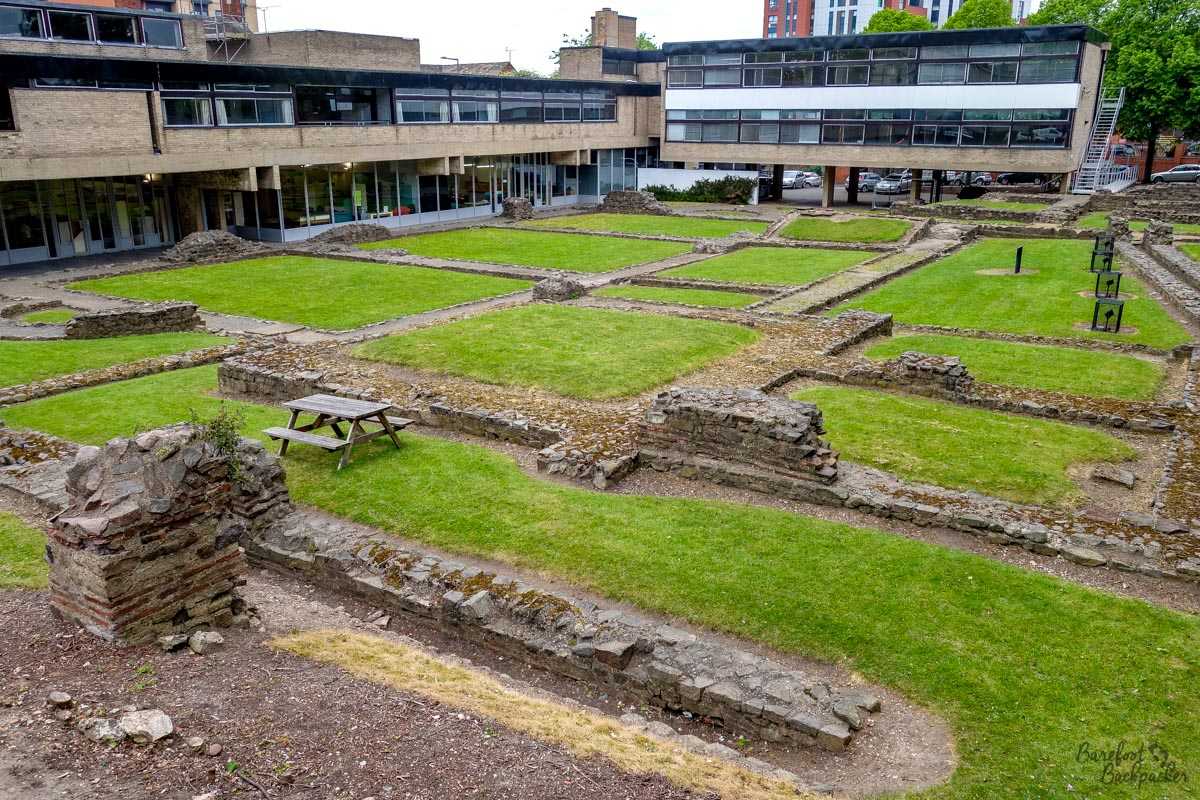 Unfortunately, despite being a town of relative significance, there’s surprisingly little that remains of Roman Leicester. The nearby museum has a couple of reasonably sized mosaic floor decorations, but apart from this wall, there’s pretty much nothing else in the wider city – as one of those cities that’s been continually ‘lived in’, old buildings have been abandoned and the stone reused, or simply renovated and replaced. 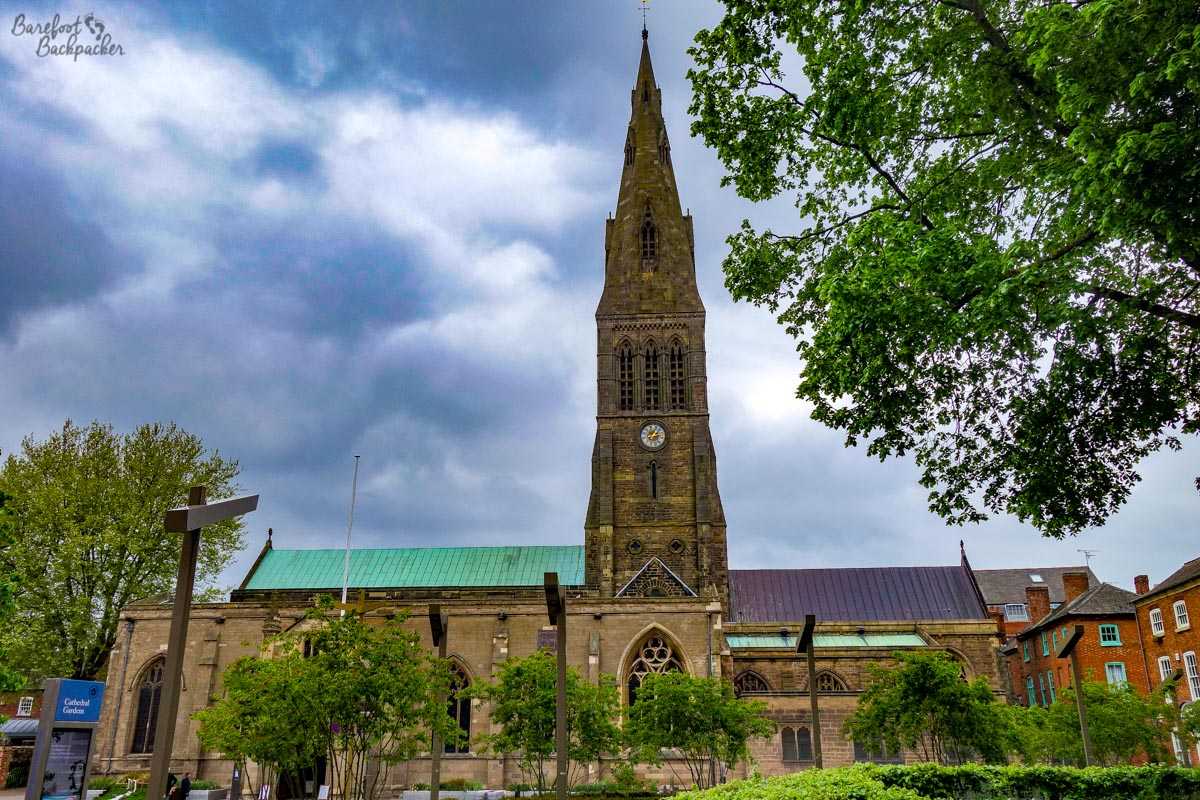 One of the older buildings still standing is of course the cathedral. Like many others in the UK, it was originally built in the period following the Norman Conquest, replacing an older, presumably wooden, Saxon church. That said, there’s not a lot left from that period – it was renovated quite considerably during the Victorian era and turned into the somewhat Gothic edifice that stands today. Although originally added in 1757, it was also the Victorians who developed and rebuilt the spire (the previous one having become unsafe). In my travels across the UK I’ve noticed they were particularly fetishistic about that sort of thing – evidently mediaeval buildings weren’t quite ‘idolatrous’ enough for them. Interestingly, it was only designated as a Cathedral as recently as 1927, suggesting that while they loved the idea of worshipping in over-ornate buildings, they didn’t really care what they were actually called … 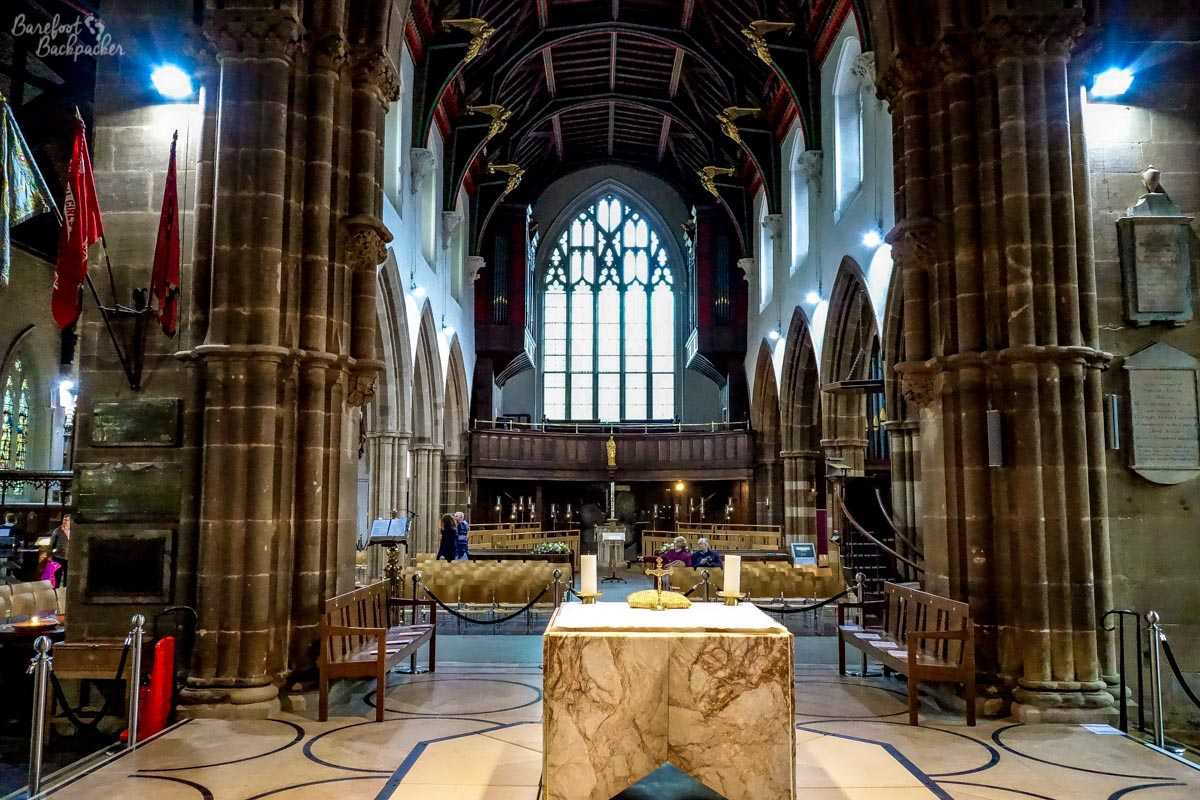 Obviously as a Cathedral, it is full of notable graves and decorations – a whole piece devoted to WW1 for instance, and memorials to people like Sir John Whatton (Sheriff of Leicestershire in the 1640s). However the most famous person here is the recently-buried monarch King Richard III. Died 1485, buried 2015. Because we, er, ‘lost’ him. 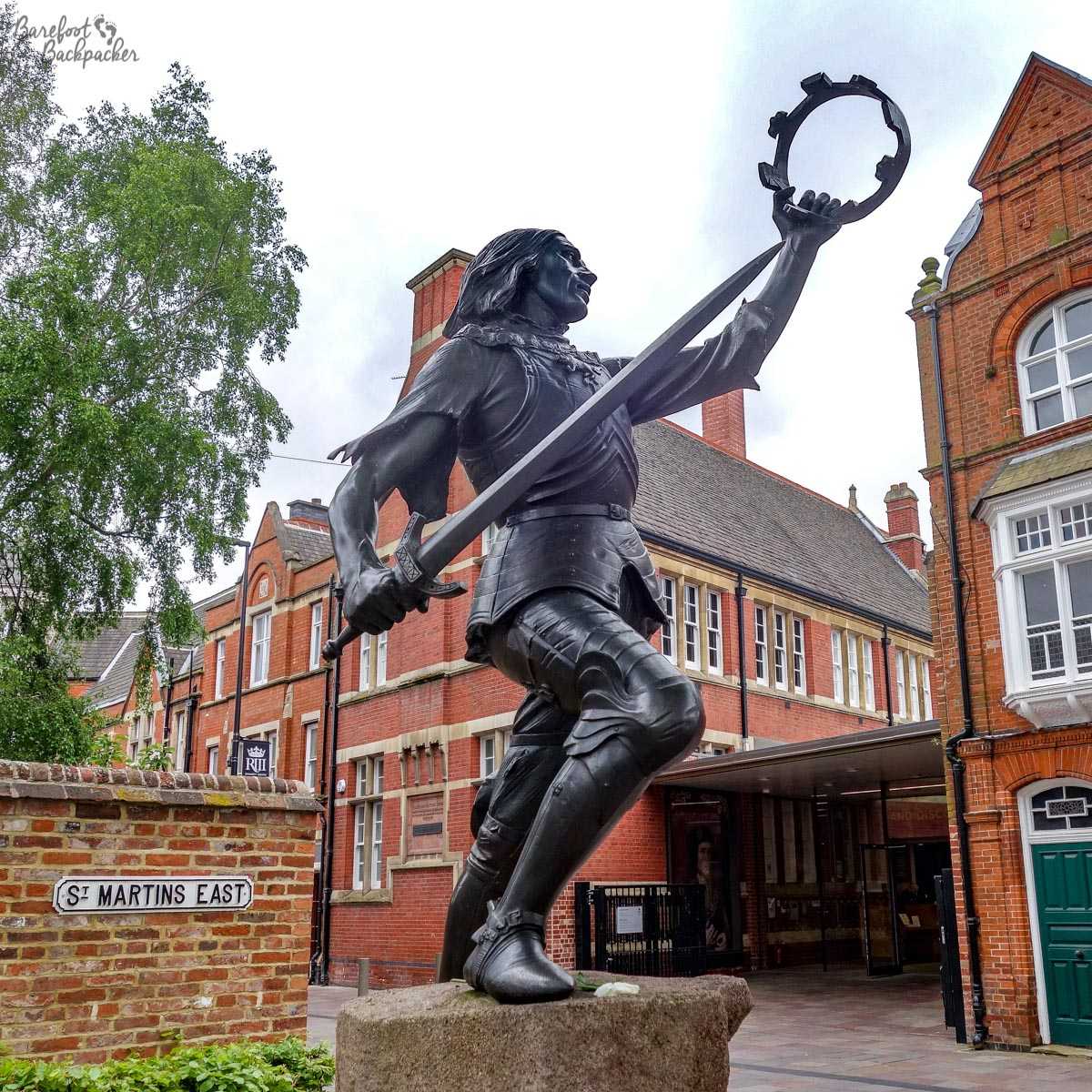 The statue of King Richard III, which stands outside Leicester Cathedral and near the King Richard Visitor Centre, close to his burial site.

See, for centuries, the fate of poor King Richard had been unknown. The legend had been that following his death at the Battle of Bosworth Field a few miles to the West, his naked, dead, body had been bound over the back of a horse and driven back to the city, where he’d been buried somewhere in the grounds of the Greyfriars Monastery that used to stand on the edge of the city centre. While a stone used to mark the site, later king Henry VIII, in his break with the Catholic Church, dissolved and effectively destroyed the monasteries of England, and the area was demolished, cleared, and redeveloped. The marking stone fell out of history, and his last resting place fell into the realm of myth and legend. 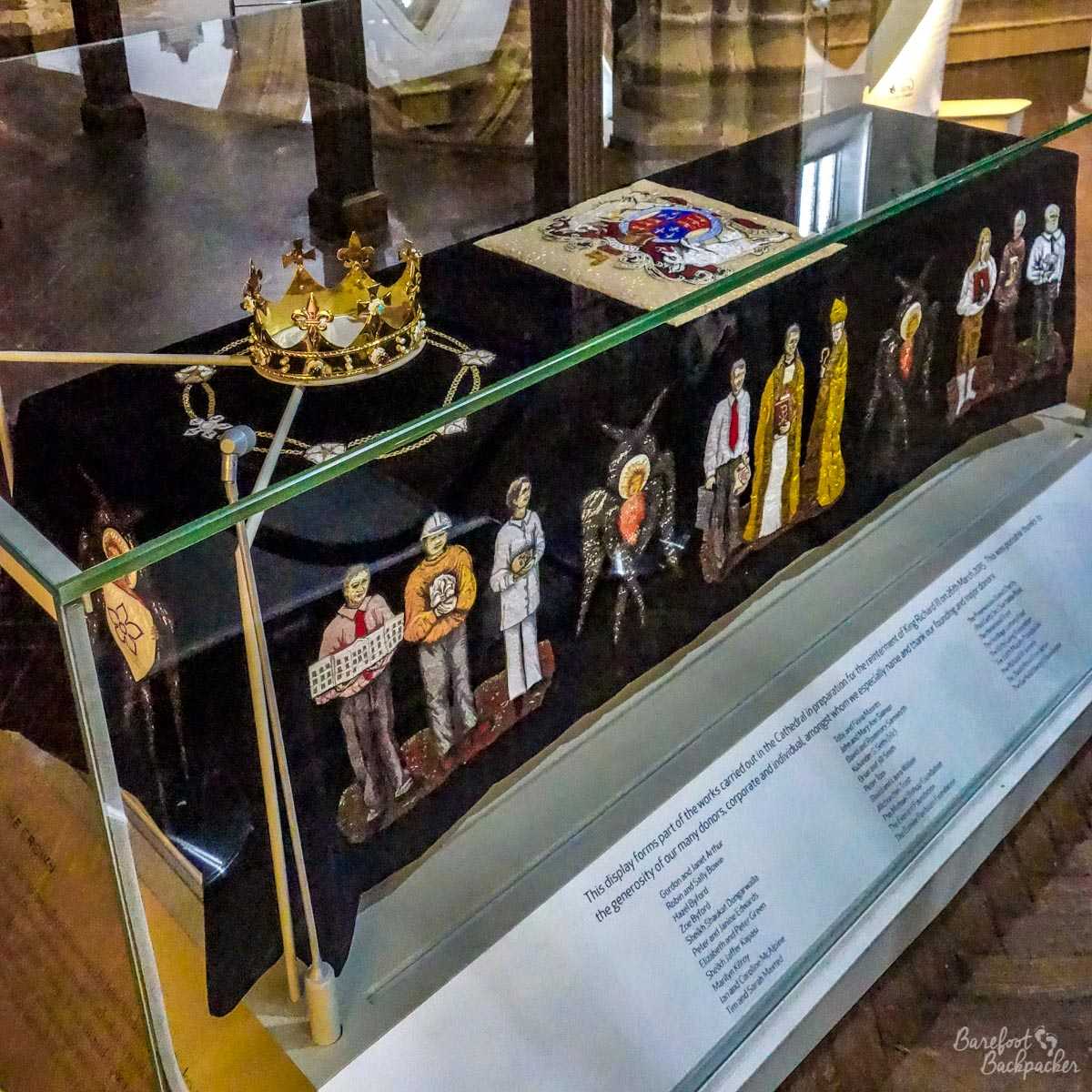 Memorial to King Richard III and replica of his crown.

In 2012, a university archaeological group set about the task to try to find his burial site. If life were a movie, years of research and wasted money would result in his body being found in the last hour on the last day of looking. Life is not a movie, and they found him almost as soon as they started looking, in a council car park under an ironically-painted ‘R’ for ‘reserved parking space’. Cue much excitement and embarrassed coughs. It took longer to bury him than to find him mostly due to a spat with York Cathedral who felt he should be buried there, given that was his wish and that he was, you know, from the House of York. Eventually though they acquiesced and Leicester was home to a genuine royal grave. 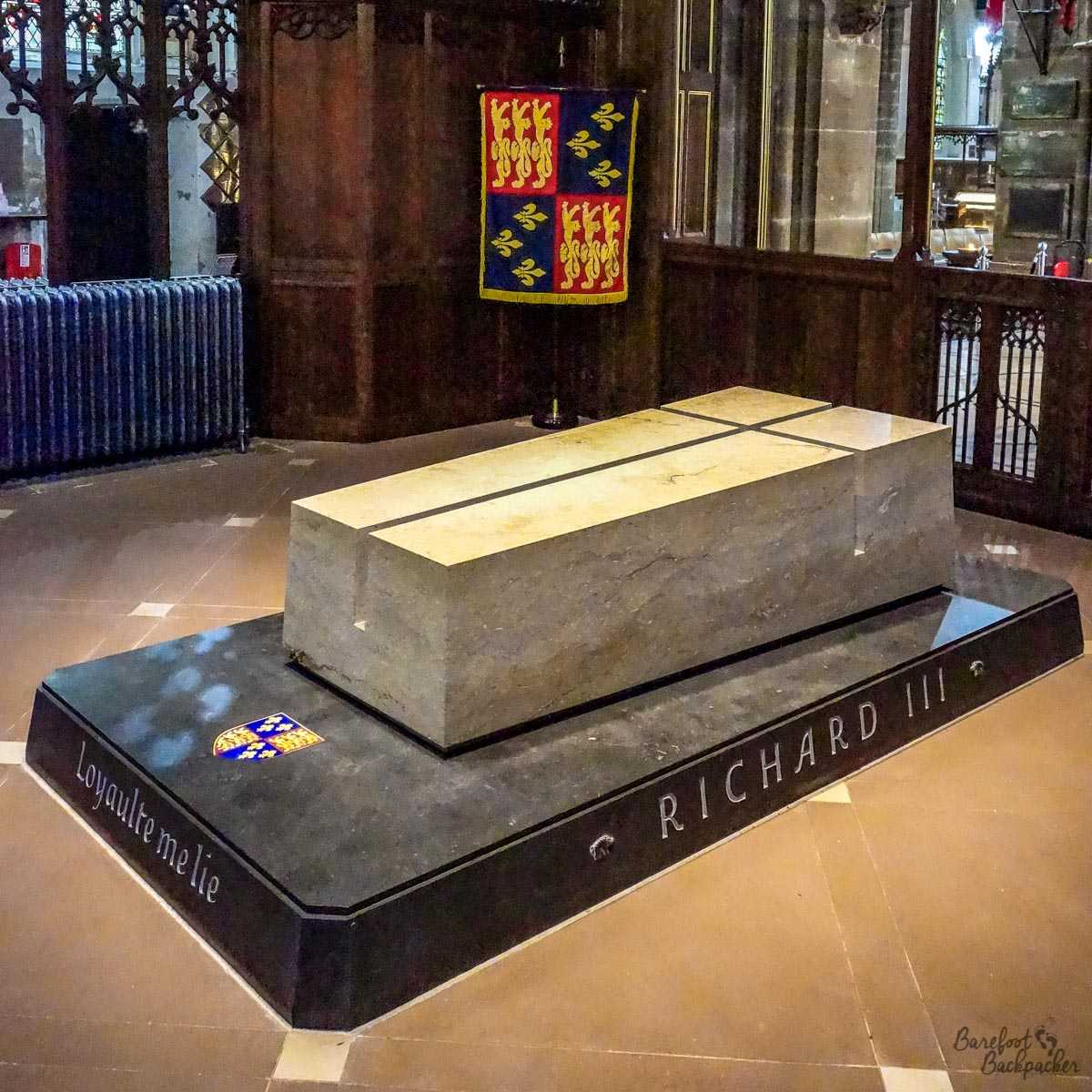 The new grave of King Richard III, inside Leicester Cathedral. The penant and crest are those of his ‘family’ – the Plantagenets.

As a travel blogger, however, Leicester has one more trick up its sleeve. It’s a little surprising to walk out the railway station and immediately come face to face with a fellow traveller, albeit one who moved in very difference circles to me. 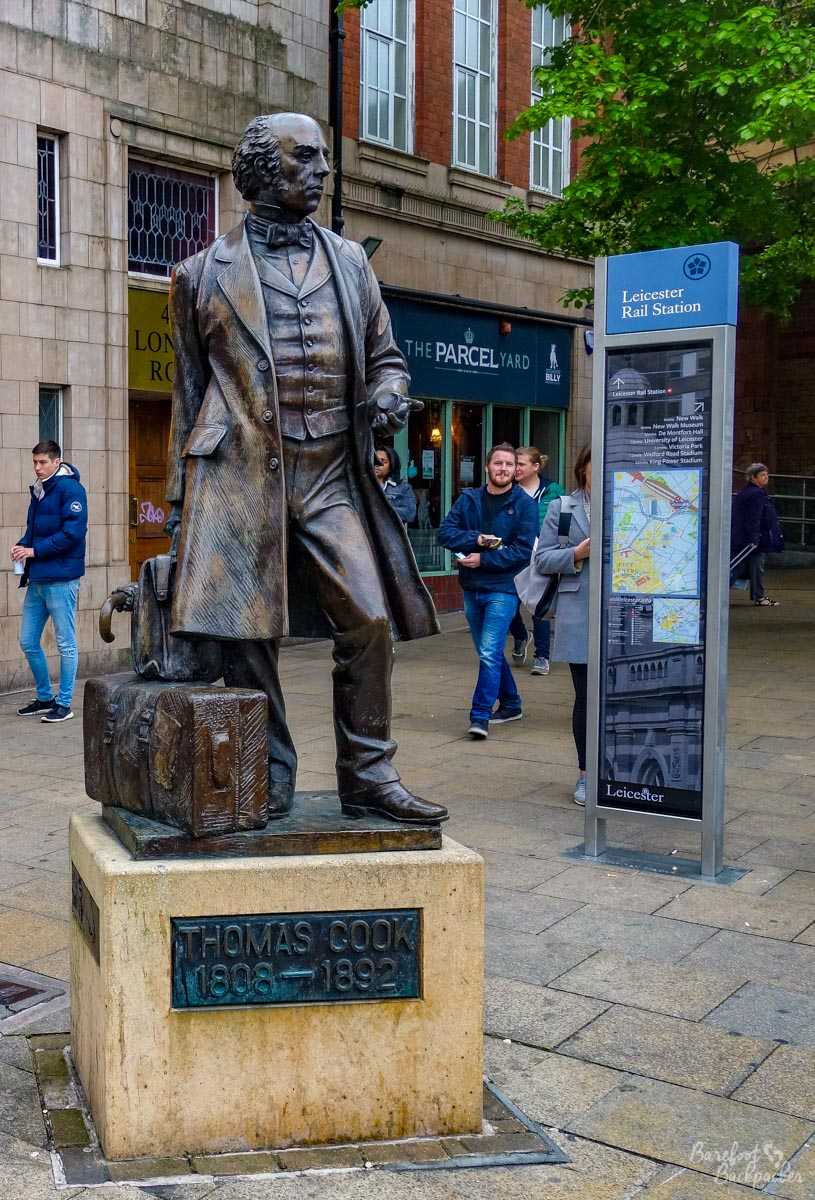 This is the Victorian entrepreneur and philanthropist Thomas Cook, who took advantage of the then up-and-coming railway network to arrange short trips for the local working population. Although not a Leicester native, he first had the idea to conduct tours after walking to Leicester from Market Harborough (about 15 miles – presumably he also walked back, though it’s not recorded if he did it on the same day) for a meeting. The first trip he organised was in 1841 from Leicester to Loughborough (11 miles) – it was so obviously a success that only 10 years later, he was organising over 150,000 people to visit London for the Great Exhibition, and by the 1870s, through his new business venture (Thomas Cook & Son) he was taking people on trips around the world.

He died in 1892, but his son took over the business, commissioning the Head Office building that not only contained offices, but also banking, exchange, and sale of travel accessories. The building was designed with carved panels depicting their history, including the 1841 train and an 1884 Nile steamer. 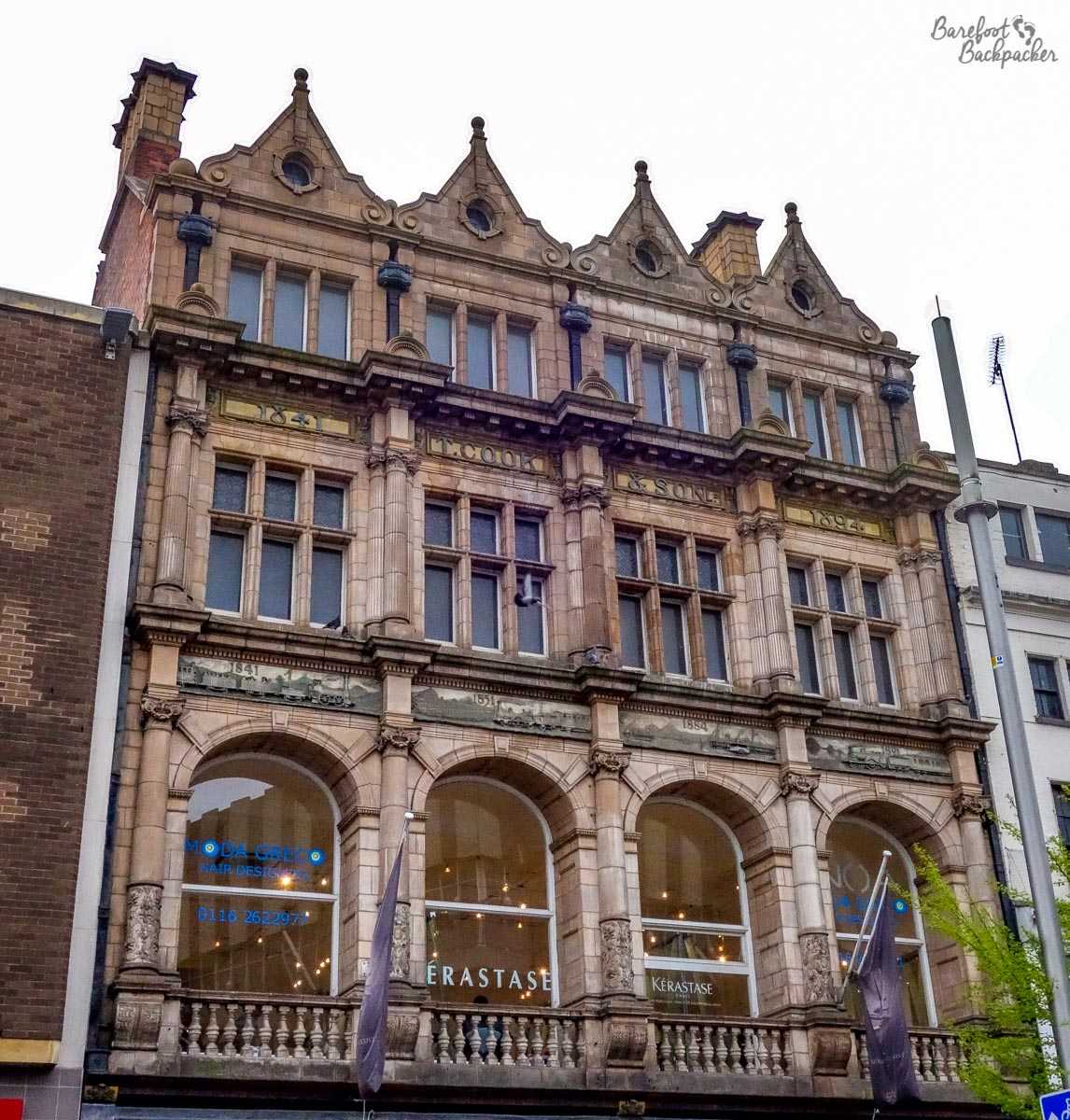 The old Head office of Thomas Cook, in the centre of Leicester. The bottom floor is now a shoe shop.

Thomas Cook himself was motived by his religion: he was a fervent Baptist and Temperance campaigner, believing that encouraging travel was a way to ensure the workers kept religiously focussed as well as distracting them from the demon drink. One wonders how he’d feel about modern-day package tours under his name – while he’d surely approve of the concept of families from the industrial heartlands being able to take two luxurious weeks in the sun, I’m not sure he’d necessarily approve of the exact scope of the phrase ‘all-inclusive’ …

Leicester then. More interesting than it sounds. And I haven’t even mentioned the curry!! 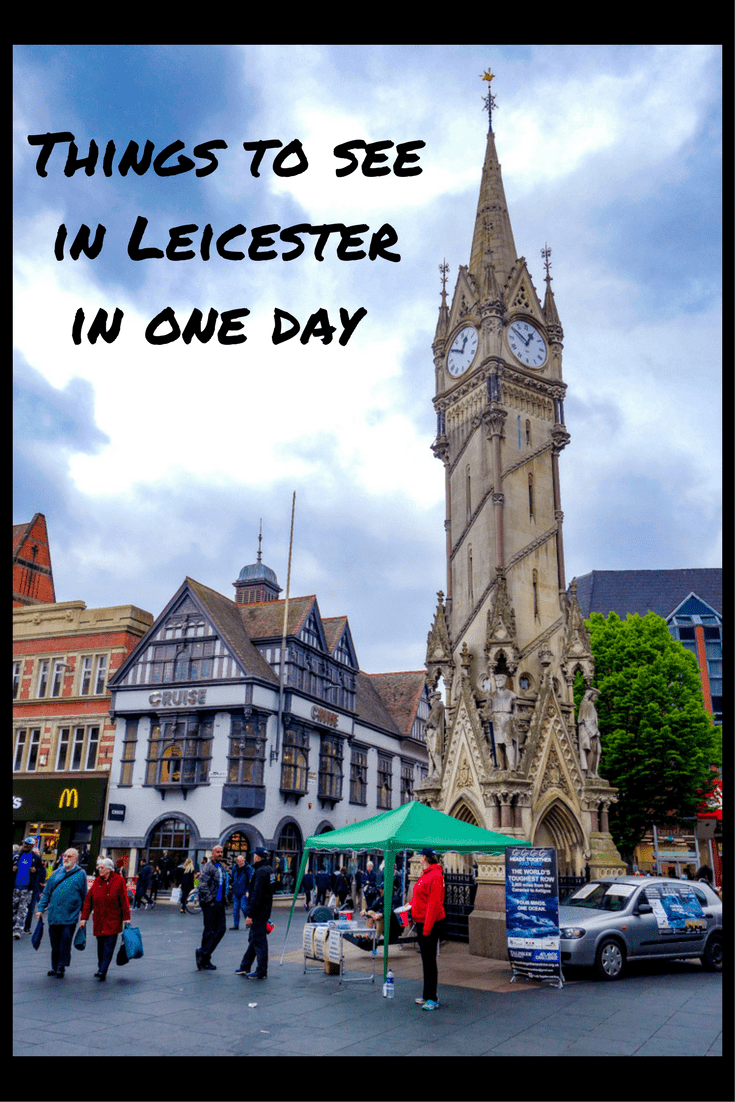