Great Zimbabwe is the largest ruined civilisation you have never heard of. 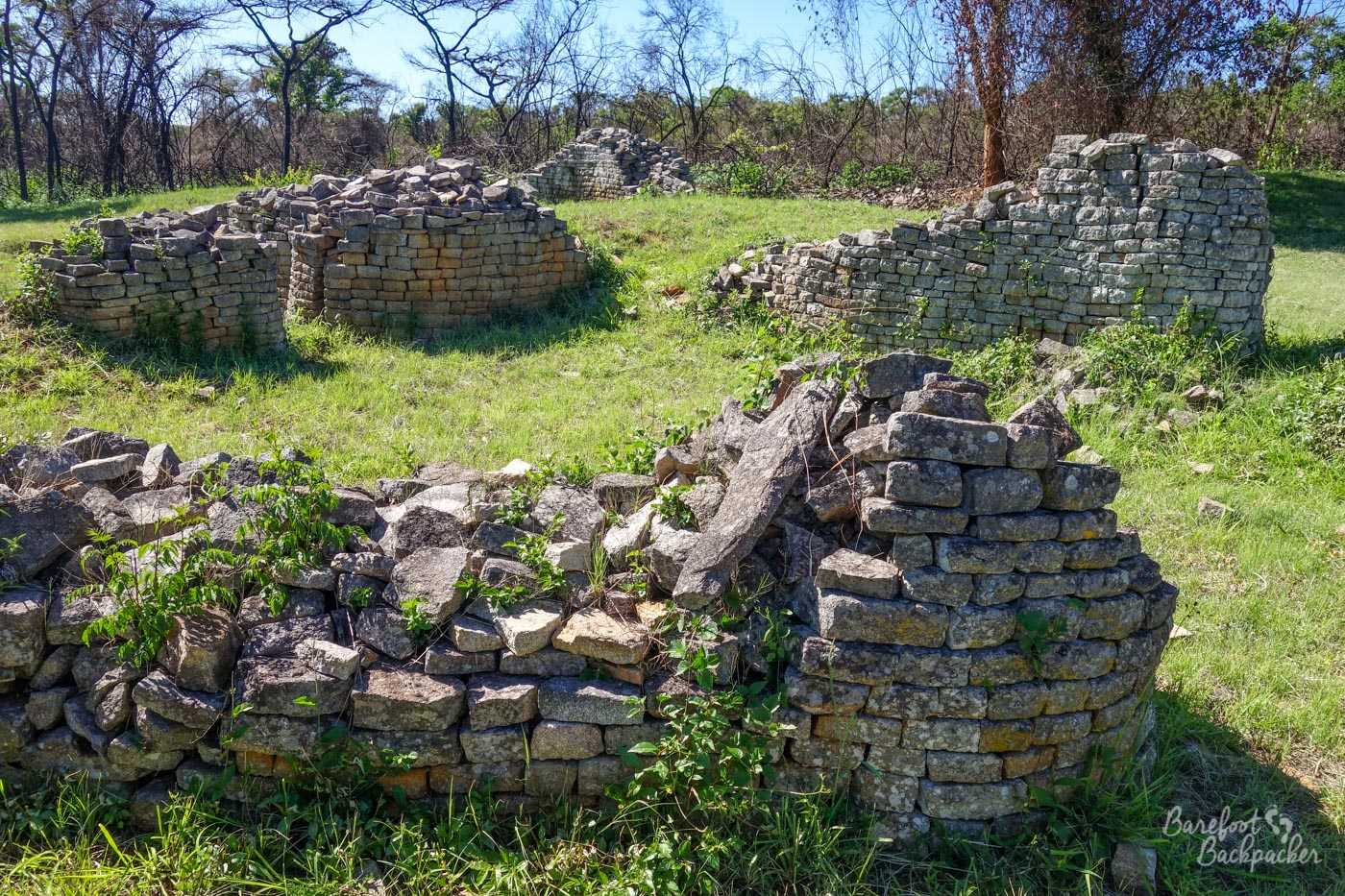 Part of the ruins in the Valley complex at Great Zimbabwe.

The problem with being ‘Western’ is, well, virtually everything we know, we hear, we learn, about the past is Western-centric. History begins with the Ancient Greeks (Pyramids aside), who are combined in the mind with a whole host of near-Eastern civilisations (eg Minoan) who were as remote to the likes of Aristotle as Aristotle is to us. Our ancient Geography seem to stop at the Mediterranean hinterland – the Tigris and Euphrates rivers marking the edge of the world. The concept of the rest of the world having important kingdoms and civilisations before ‘we’ got there seems, frankly, absurd. The ones that have reached the Western eye – Incas, Aztecs, Indians, Chinese, ‘those people that built Angkor Wat’ – ah, they didn’t last, or they weren’t that civilised really.

And Africa? Where it all started? Merely hunter/gatherers and bushmen, barely anything more than tribal villages – no kind or sense of civilised life at all.

It’s a real shame that Western culture still tends to this ‘ignorance’. ‘Ancient Aliens’ TV show aside, I’m sure it’s not an ‘active racism’, but more almost a kind of ‘disinterest’; that is to say, a feeling that it’s ‘far away’ and therefore not as ‘accessible’, so people think of it as less ‘important’. Westerners are much more familiar with the likes of Pompeii, of Mediaeval Castles atop hills; they’re in places they ca easily get to, with surroundings that feel familiar, in empires that covered places and cultures they know well. This isn’t a geographical thing either, very definitely it’s cultural – despite being much closer to the Western World, our knowledge and cultural appreciation of the kingdoms of West Africa is also strongly lacking.

While not as old as the likes of Pompeii, the fact Great Zimbabwe exists at all serves to highlight this ignorance. Believed built originally during the early Iron Age (some time before 1000AD), the site was occupied twice and expanded considerably over time. Constructed using local stone and advanced dry-stone-walling techniques, firstly a kind of hill-fort was created, using the natural contours of the hill to good effect. Over time, different enclosures were added around the hill, including the famous tower, believed to be a granary, that has become an icon of the modern country of Great Zimbabwe. 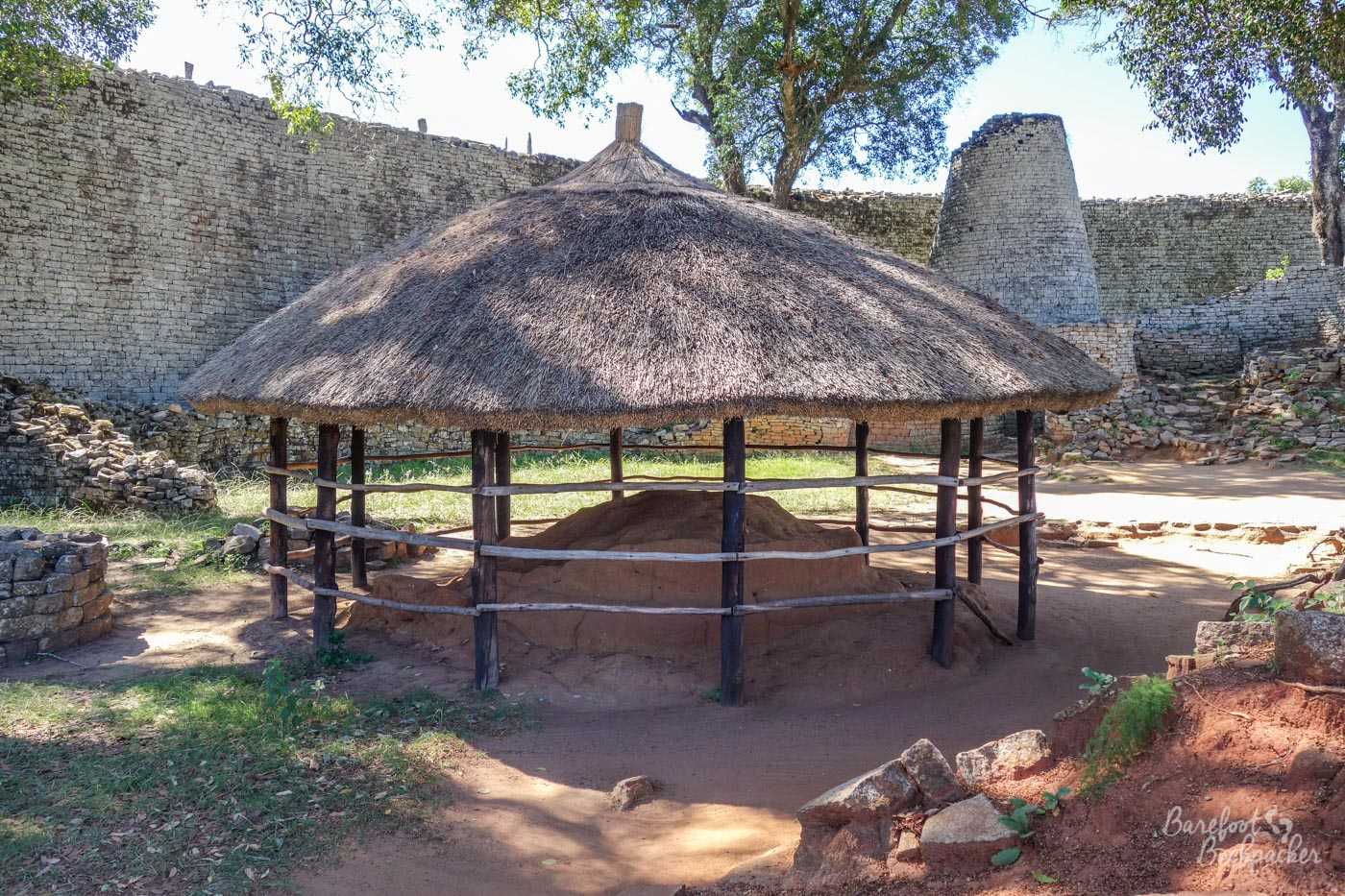 Part of the Great Enclosure complex – with the iconic tower in the background.

The people who built this were related to the San people of the Kalahari, and thrived on trade; Great Zimbabwe thus served as an important trading point between the inland tribes and, via the local rivers which flowed into the Zambezi and Limpopo, the Arab traders on Indian Ocean ports.

It was eventually abandoned in the 1500s/1600s, not because of empire failure but for far more pragmatic reasons. The external balance of power had started to shift and there was a need to concentrate resources in the Northern part of the empire, to defend against the beginnings of Portuguese expansion from the coast – which is directly why the capital of the modern Zimbabwe nation is Harare, as it was closer to where the kingdom needed to concentrate on.

If Great Zimbabwe were in Europe, it would be a ‘must-see’, with hordes of gawping tourists looking through safety fences while hawkers try to sell over-expensive tat replicas of the granary. As it was, I was virtually alone to go scrambling barefoot up the original pathways and stand on the edge looking down over an almost empty, vast landscape of bush, rock, and well-preserved ruinous monument. 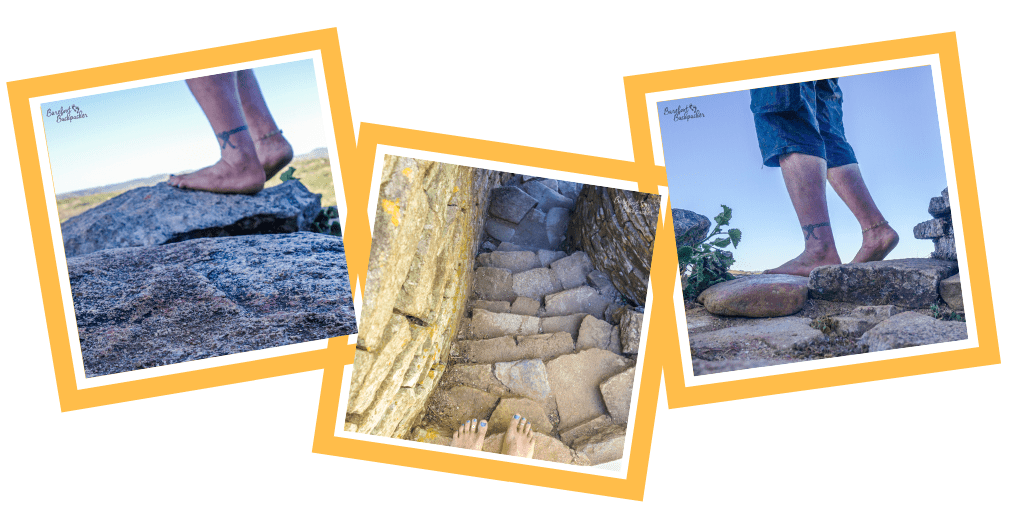 Even just getting there is remarkably awkward, especially by public transport. The nearest town is the small market town of Masvingo, in the south-eastern corner of the country. There is, theoretically, a (mini)bus that heads to the site, but on arrival from Bulawayo I saw neither sight or sound of it, so I, along with a young backpacker heading from Cape to Cairo, hopped in a taxi. On the way back out the next day, we stood by the road where we believed the bus would stop, but after waiting there for maybe half an hour a passing tourist gave us a lift back into town. It’s about 25km, and in the tropical heat and little shade it’s not a journey you want to make without a vehicle. 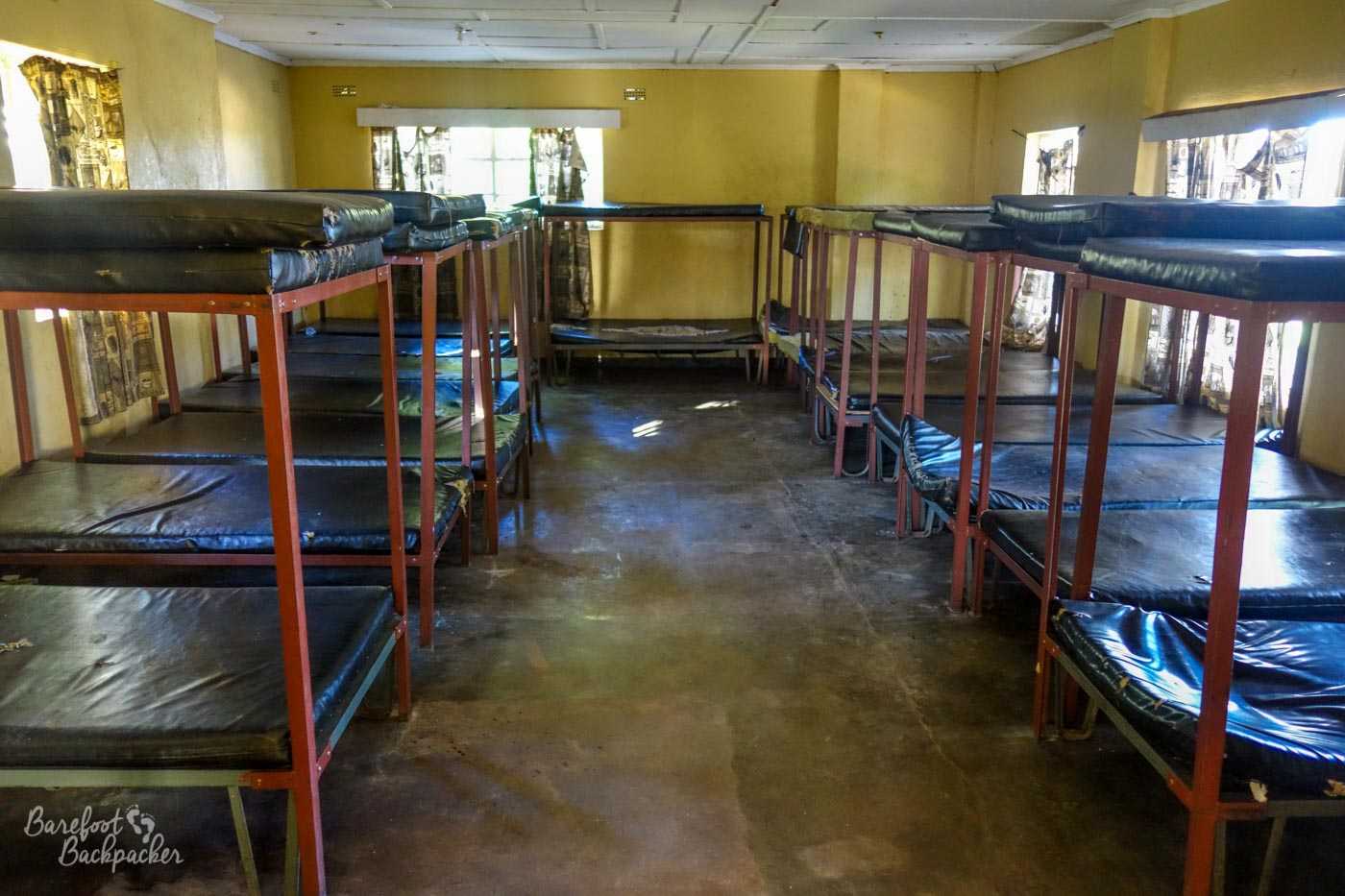 There’s a reason most people stay in the rondavels…

While close enough to the town for a reasonable day-trip though, we opted to overnight at the site. This, like at Mole National Park in Ghana, tends to favour the more affluent middle-class traveller with small round huts (rondavels) as mini-lodges etc, but there is a particularly grim and austere dormitory that serves over 25 backpackers and possibly a couple of rats that we managed to grab beds in a side room of. The toilets didn’t work and the design was more ‘ah, concrete framework, that’ll do’, but it was only one night and we were the only people in the place, so it was fine. We were able to eat at the on-site restaurant, which was empty save for a random local chap who talked with us for a while about how he was waiting for Mugabe to die and then he’d make his move on rising to power himself. To this day I wonder if he made it.

The first port of call in the morning was to the site museum, which takes you through a brief history of Great Zimbabwe by the use of maps, information boards, and a small collection of objects found in the archaeology.
At this point I ought to muse on the name itself: “Zimbabwe” is a word derived from the local Shona language that refers to ‘houses’, and either means ‘stone houses’ or ‘venerated houses’. “Great Zimbabwe” thus indicates the largest of the many scattered around the country. The name later became applied to the whole of country once called (Southern) Rhodesia essentially to promote Black heritage and history as opposed to the White Colonial name that had been imposed on it. 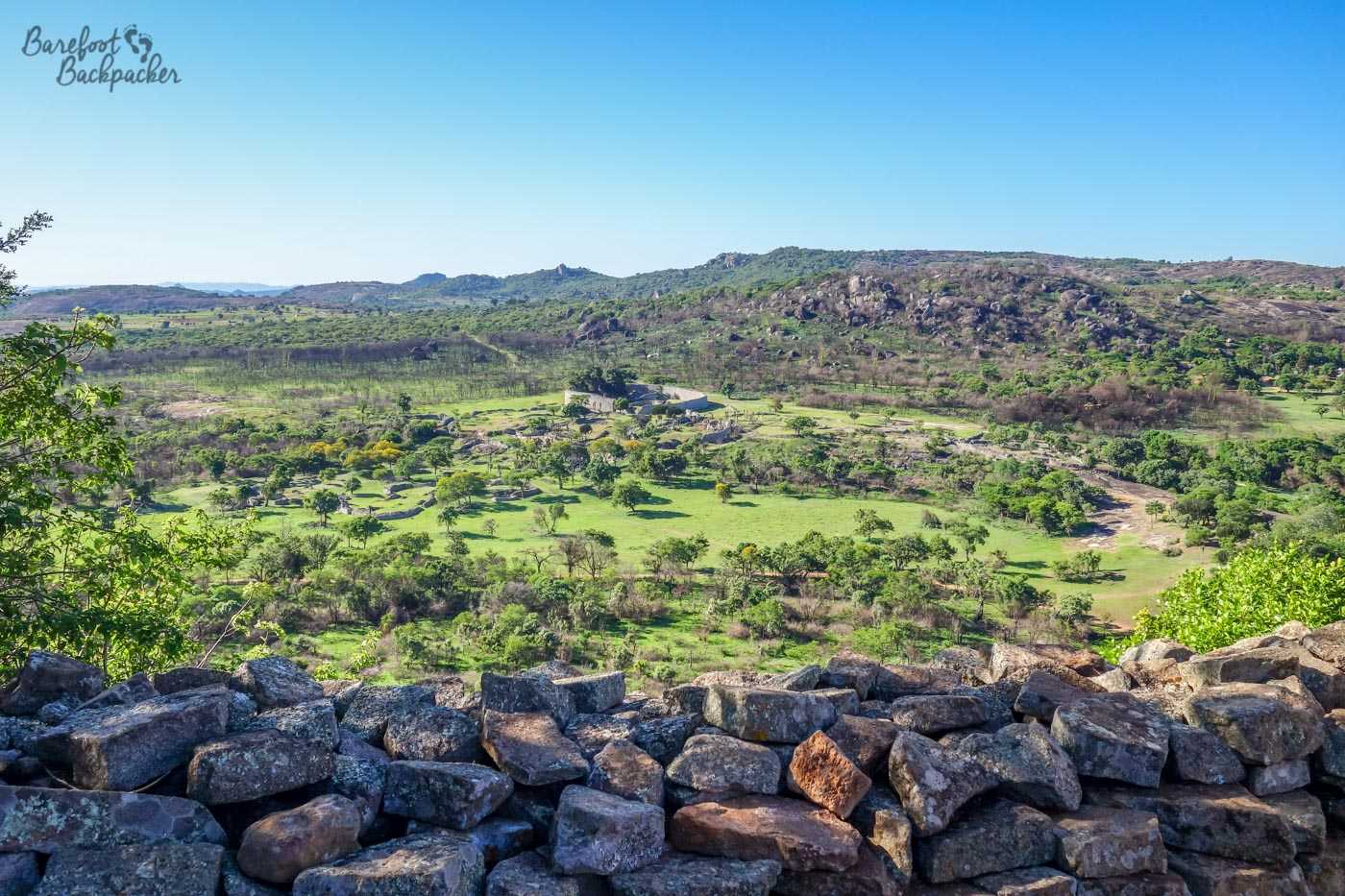 View across the Great Zimbabwe complex from the Hill Complex.

The ruins of Great Zimbabwe cover quite a wide area – about 7.2km², or 3½ times the size of Monaco – and are divided up into several sections; the most famous being the Great Enclosure, but our first port of call was the so-called ‘Hill Complex’, named for the logical reason that it’s built on a hill. It’s the oldest part of the site, having been occupied from the 9th Century, and makes for a fairly clear vantage point overlooking the plains and the valleys for quite some distance. 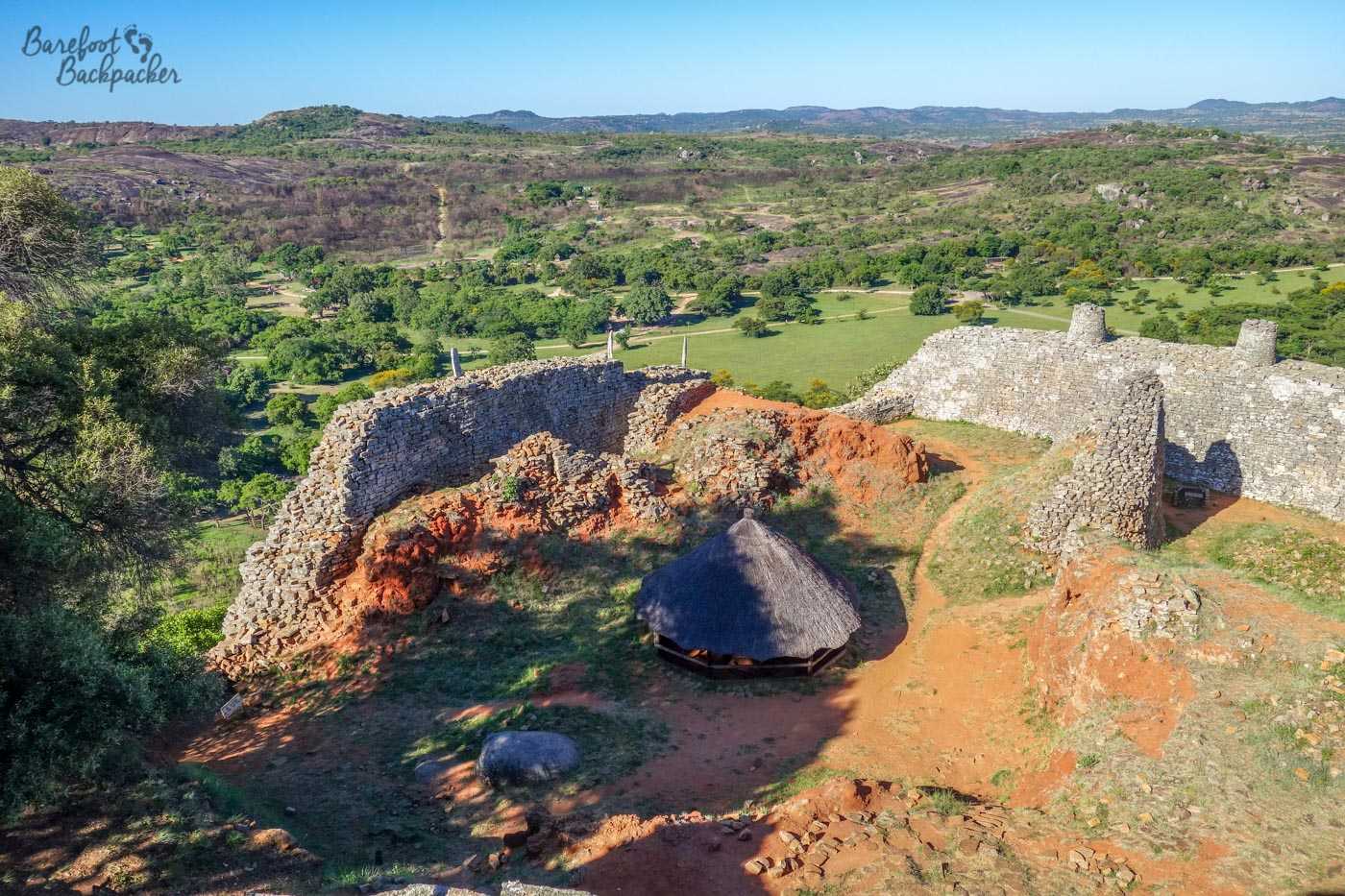 View of the top of the Hill Complex.

The pathways up are narrow and steep, stairways hemmed in by tall stone walls, but once you get to the top of them, the views over the rest of the site make it all feel worthwhile. There’s a number of stone frameworks still present on the higher ground, giving you a sense on how large some of the buildings up here were. One theory is that this part of the site was the original administrative/government zone, another that it was used primarily for temples and worship. Despite being built entirely out of stone, famously no mortar was used in construction, making the whole thing weirdly reminiscent of the walls seen across much of northern England. 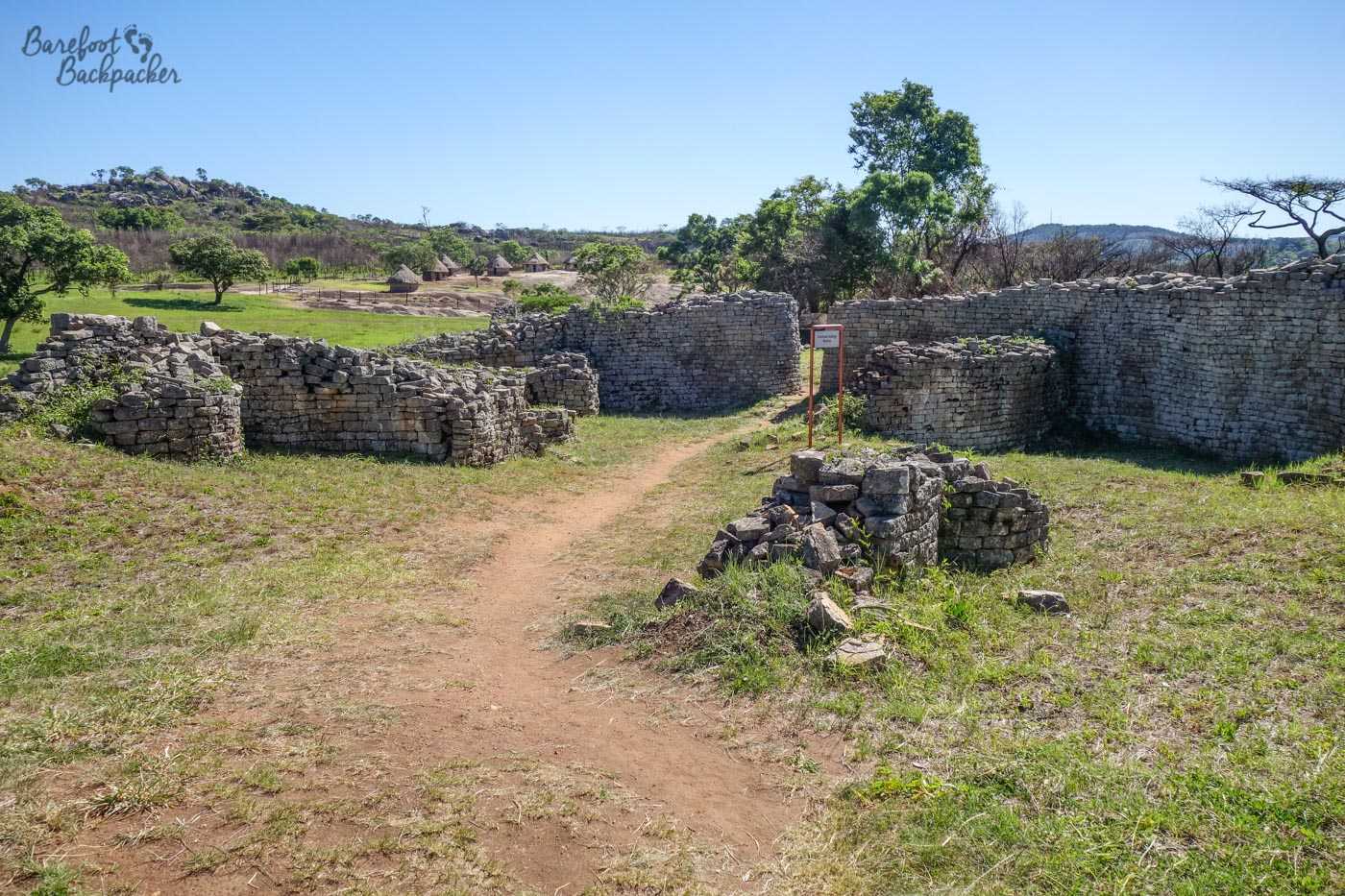 The Valley Ruins area – note the modern rondavels in the background for comparison.

Below, on the plains, is the area known as the ‘Valley Ruins’. These are predominantly made up of smaller, separated buildings, and to my eyes at least many are reminiscent of the rondavel houses that make up much of the living space in the villages in the area, even today. There’s a large number of these scattered around the complex, and though some of them are a bit larger, this definitely feels like a predominantly residential district; walking along clearways between them feels like you’re walking down a road in the suburbs. But with fewer cats.

More of the Valley Ruins area.

The other section of Great Zimbabwe is the Great Enclosure. This is the area that appears in the publicity, but when you’re right up close to it, it’s remarkably hard to photograph well – good thing I’m not a travel blogger, eh?! The centrepoint is that conical tower, 9m high and 5.5m in diameter, and as I say, believed to have been used as a granary, or possibly a kiln/furnace. The Great Enclosure itself is a large building surrounded by a long, enclosing, passageway, and may have been used as a royal residence at some point, or at least an important meeting hall for official or diplomatic business. 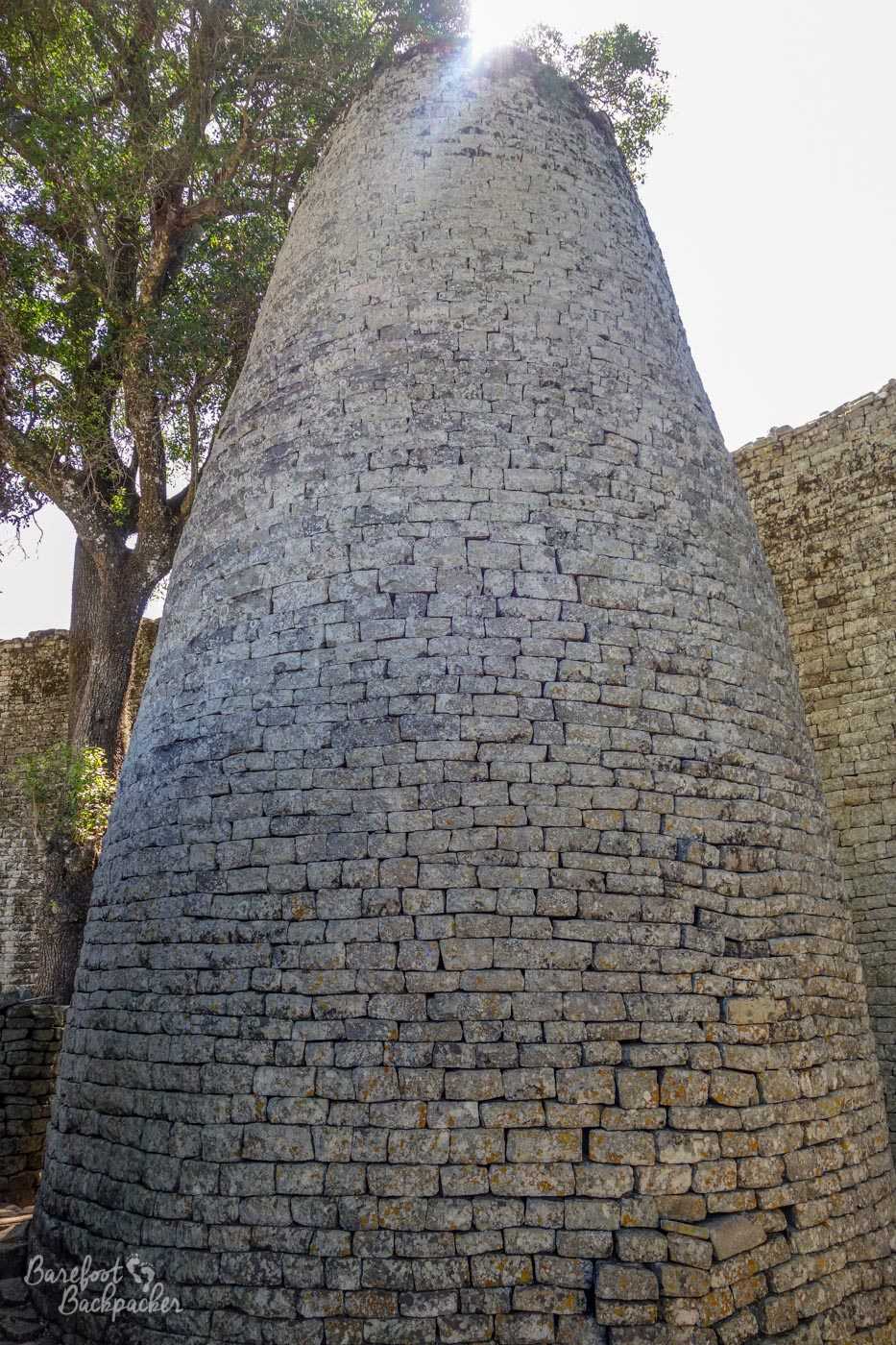 The conical tower in the Great Enclosure area.

If all this sounds quite vague, it needs to be remembered that one of the main problems with ascertaining the history of Great Zimbabwe is political. Contemporary African historical records weren’t kept, or have been mostly lost over time, meaning much of the historical and archaeological record has been written by colonialists, who obviously have their own criteria about origin and purpose. Indeed during the latter days of Rhodesia, under Ian Smith, it was official policy to maintain the site was built by, if not specifically white peoples, then at least by foreign influence (though possibly not Ancient Aliens, for once), on the grounds that it would be ludicrous to suggest that something so impressive and important could possibly have been constructed by the native black population. 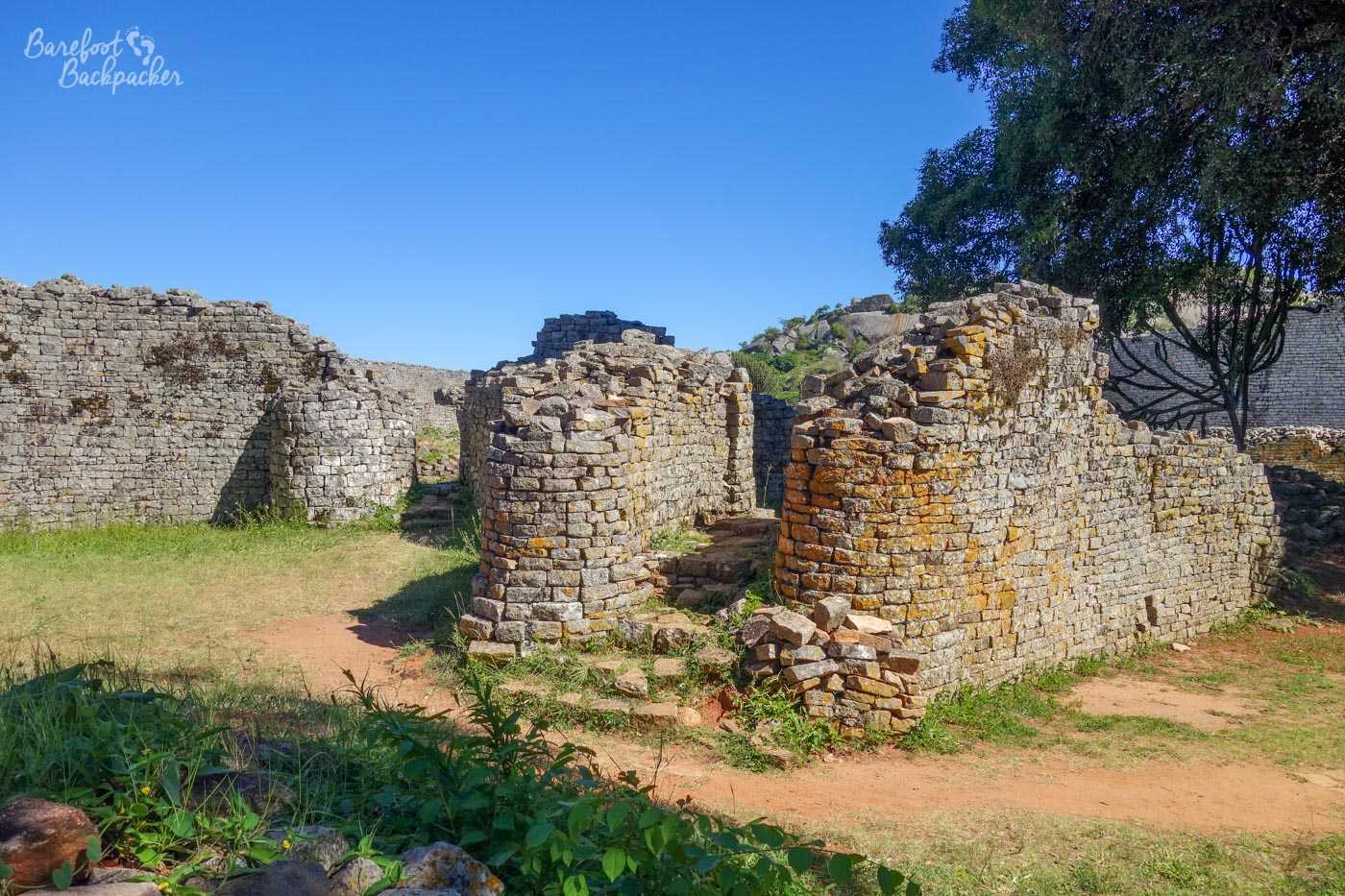 A wider view of the Great Enclosure area.

Conversely, the African population made sure to highlight the black nature of Great Zimbabwe, even to the extent of, as mentioned earlier, co-opting the name for the post-colonial country, and the adoption onto the country’s new flag the ‘Zimbabwe Bird’, a symbol of the country based on soapstone carvings found at the Great Zimbabwe site.

Thus, the concept of Great Zimbabwe, the fact of its existence, has always been seen as more important than what actually happened there. Regardless of this though, there’s very few places where you can wander around a place so big and important, and yet so freely. Due to its location too, the number of visitors is relatively low (the website FlyDango says 78,000 people visited in 2018 and infers this was a large number), so while I went in the early morning in the middle of Winter and thus pretty much had the place to myself (not just the dorms and the restaurant the previous night; even by the time we were leaving around lunchtime, I think I saw only about 4 or 5 other people coming out the museum).

Is it appealing to you now? 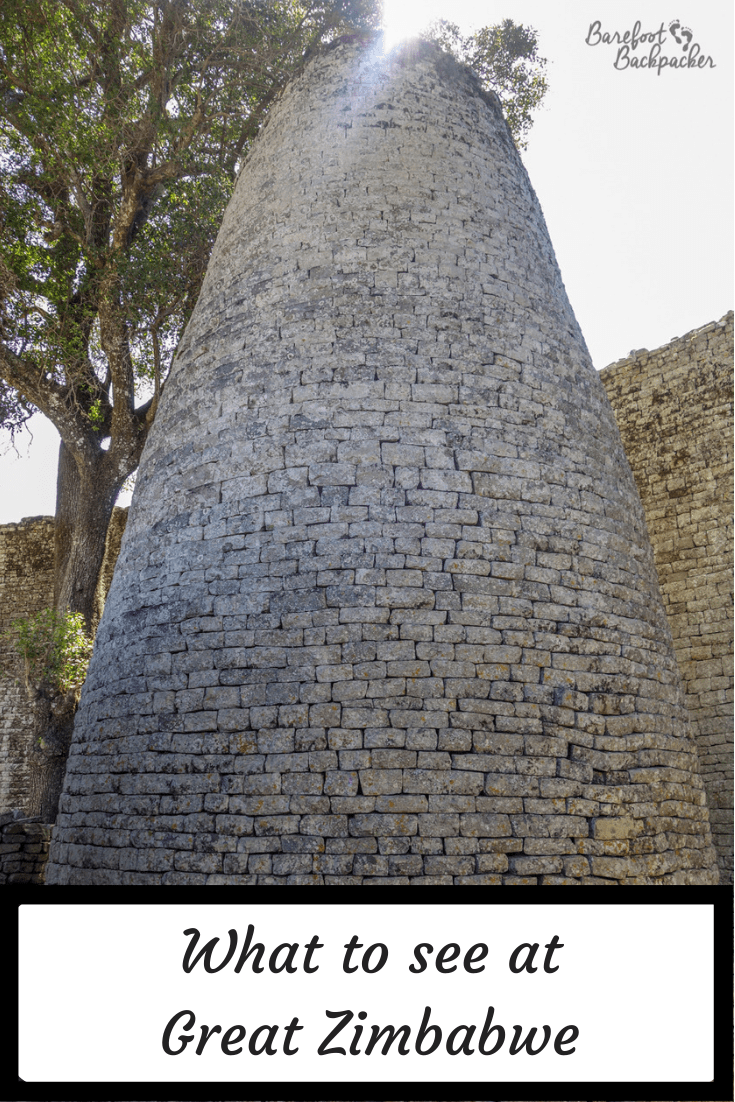