I kind of realised my asexuality by accident. See, I go through life thinking “Well I won’t know for sure unless…”, and, I concede this may well be a very strong case of Too Much Information but, that’s the reason I ended my virginity. I won’t say ‘lost’; I know exactly when and where and why it happened – in the bedroom of the house I was renting as a post-student, to a lady who’d been dropping strong hints for the previous 8 months. I was 20½ years old, and I’d been avoiding it, as I didn’t think I’d enjoy it, or even be any good at it, but I figured I ought to try to just in case I was wrong.

Readers: I was not wrong.

Asexuality is the lack of sexual attraction. Someone who is asexual generally doesn’t find any other person sexually attractive, regardless of who they are. In a strange way, you could think of it as the exact opposite of Bisexual or Pansexual, who have the potential to find anyone sexually attractive.

That of course doesn’t mean we can’t be attracted to people in different ways – remember even heterosexual people have close friends of the same sex, and of course you can appreciate that someone is handsome or beautiful, or desire to look like someone, without finding them sexy. All asexuality means is that we don’t have the desire to bonk them.

How did I find out I was asexual?

The short answer is I found out I was asexual because in around 2011 I read an article on the Guardian website about asexuality and thought ‘well, that’s relatable’. However looking back, it’s clear the clues were always there, if only I’d known what I was looking for.

I talk more elsewhere about why there appear to be few older asexuals, but with regard to my journey personally: I never knew asexuality existed; I didn’t know it was an option, I just always assumed I was just bad at heterosexuality. And while I always thought about encounters with other men, in my head they would only ever have been sexual, and specifically sexual for them and not me; the idea of, for example, kissing a man is so off my radar as to be in a different galaxy. 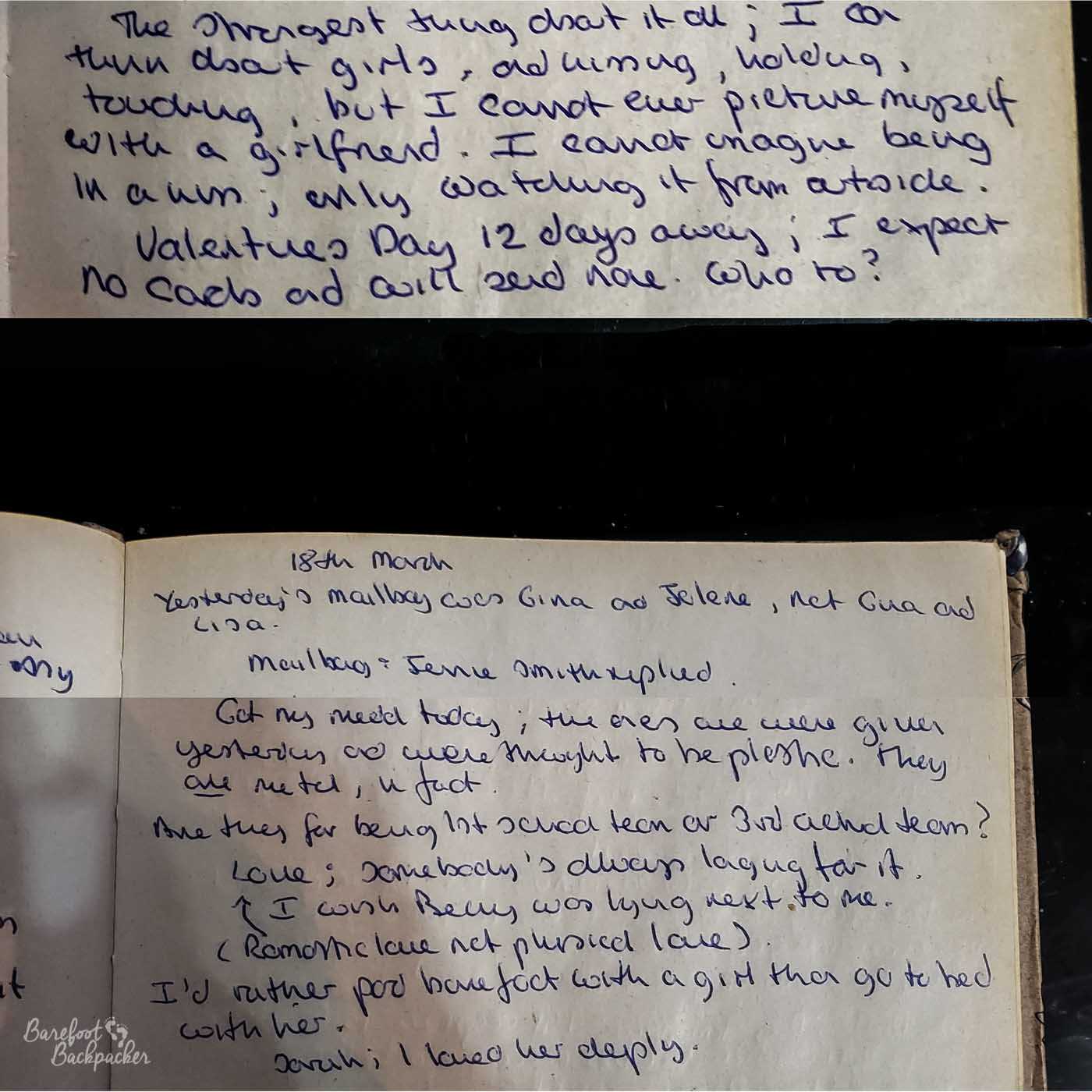 Two extracts from my teenage diary. I’m sure there’s more obviously acespec (tho not arospec) entries if I look deeply enough; will research that.

Growing up I kept a diary, as most teenagers did. And, still conforming (as I didn’t know any ‘better’), I wrote down details of all the crushes (or at least what I thought were crushes) I had on people I liked. Despite going to an all-boys school, all of my friends at the time were girls – I had quite a lot of penpals and I enjoyed the connection I had with them, that feeling of being close, yet also at a safe distance. They often used me to ask questions of ‘why are boys?’, assuming that I’d be able to answer, yet even then I knew I wasn’t quite the same as the ones they were snogging. Though some of them I did develop little weird crushes on, when I wrote about them in my diary, it’s clear in hindsight that I tended towards the asexual spectrum. “I wish I was holding her hand”, “I want to hug her”, but also “I don’t ever imagine having sex though”. Looking back this should have struck me as ’a flag’, but it honestly wasn’t something that really bothered me, I never really thought about it; it just wasn’t important. I assumed these were romantic feelings, but in fact they were much more simplistic, ‘platonic needs’. You’ll also note my penpals felt comfortable around me to discuss that sort of thing – I was never seen as ‘a threat’.

Linked with this is my subsequent relationship with, and realisation of, my gender identity. This is a whole different post that I’m not yet in a position to write, tho I did podcast about it in passing.

The problem came later. It was always something lurking in the background of my relationships, and meant that none of them ever really developed much beyond the ‘honeymoon’ stage. Note that I have been engaged three times, though the latter two were more hope beyond expectation than anything truly life-affirming. Also I should say I’m still friends with, well not only two of them but indeed most of my exes. Partly I put this down to my dismissal of sex as being ‘relatively unimportant’, so there ends up being very little difference between friends and lovers for me. Indeed most of the latter come from, and quickly return to, the former; I’m friends with my exes because I was friends with them before we started dating, and in a sense, that we dated is more an experiment that didn’t work.

One of my exes, Amy, we broke up “at some point between 2016 and 2018”, assumes I’m gay, and this feels like quite a common issue amongst asexuals. While I may have dabbled in that arena (yum yum sausage), I find naked men even less appealing than naked women. It’s interesting watching programmes like ‘Naked Attraction’ – she objects to the concept of finding people to date based purely on what they look like, even if you know you’ll be naked with each other later, while I just don’t find nakedness attractive in and of itself. 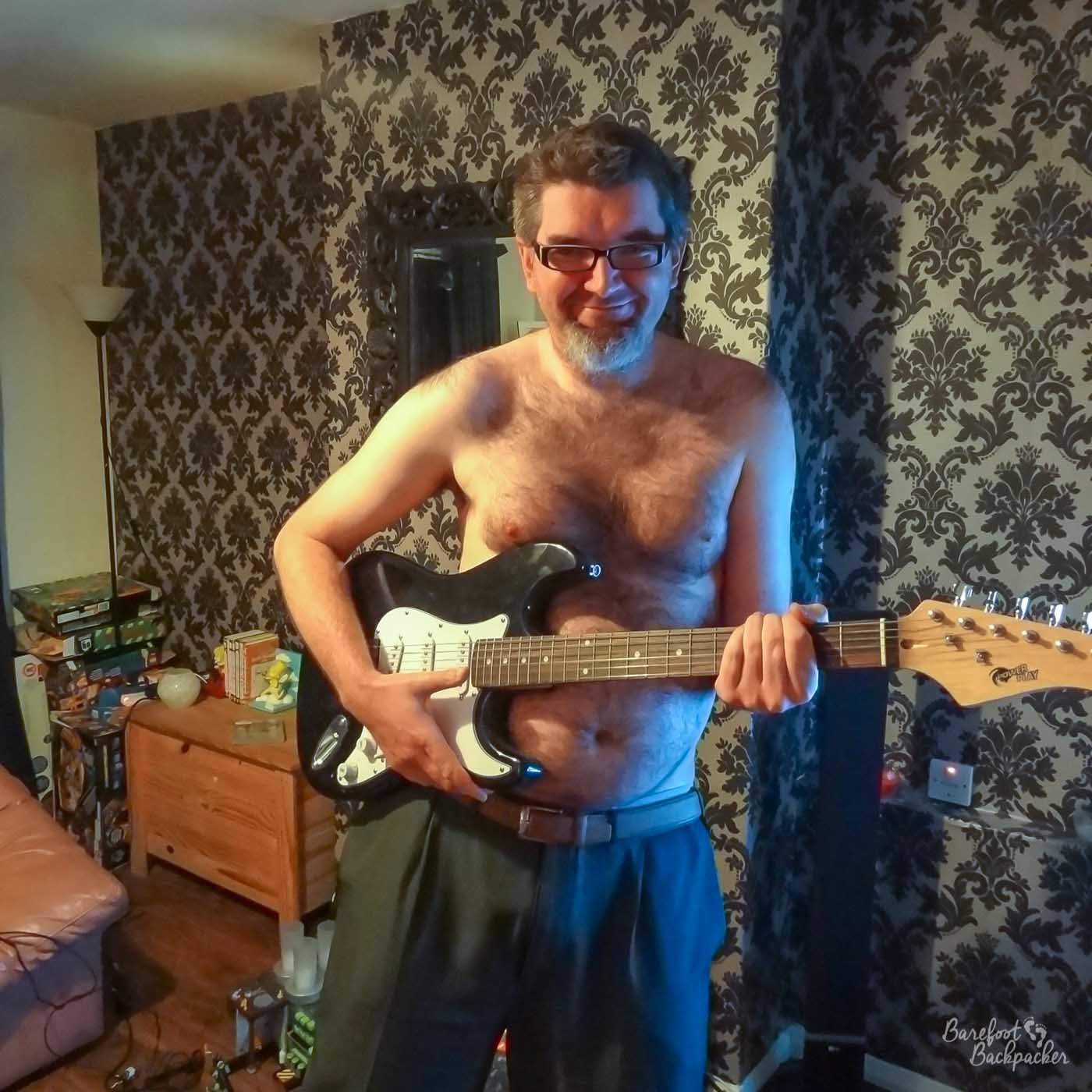 Picture taken by my ex, Amy, in her living room. Apparently she wanted me to pretend to be a rock god, because she found the ‘look’ attractive. Each to their own, I guess.

Like, one of my other friends recently said if someone’s getting undressed or something in front of me, and end up showing off a bit more bare flesh than they ought, I have a habit of removing my glasses, and passively clean them while looking down. This is both avoiding looking, and also my eyesight is so bad means even if I did look, I’d probably not be able to make anything out anyway.

I know that nudity is unrelated to sex, but I think a problem with my generation is that we were kind of brought up socially and culturally to combine the two. As a result, nakedness makes me feel awkward. I don’t like being naked myself; I only do it in the shower or bath because I kind of have to. A couple of my friends are part-time naturists; while it shouldn’t bother me – and indeed being asexual I’d be the perfect naturist – for some reason I just find it awkward and uncomfortable. I really don’t fancy going to a naturist beach or resort.

How did it feel to realise I was asexual?

That said, it took a while longer to realise another aspect. That my relationships tend to fail not just because of my asexuality though, but also because I was aromantic.

What is the difference between asexuality and aromanticism?

Being asexual is just who I am; it doesn’t define me and nor is it the sum total of my personality, but equally it is an important part of how I live my life. I guess now just feels like the right time to be fully open and talking about it.

I came to both asexuality and aromanticism at an older age than most these days, but that’s partly because the knowledge didn’t exist when I was learning about myself. In hindsight, the clues were there from an early age, I just didn’t realise or understand them.