Bloody obvious with hindsight, but let me just reiterate the point, so no other backpacker tries the same stunt.

If you are ever travelling through the small mountainous county of Lesotho, I’m thoroughly recommending you visit the area around the Sani Pass – hopefully you’ll clearer weather too. And to make sure you see it in its glory, at your own pace, I’m again going to recommend that you stay the night somewhere around the Sani Pass Mountain Lodge, which lies directly next to the Lesotho border post at the top of the pass. 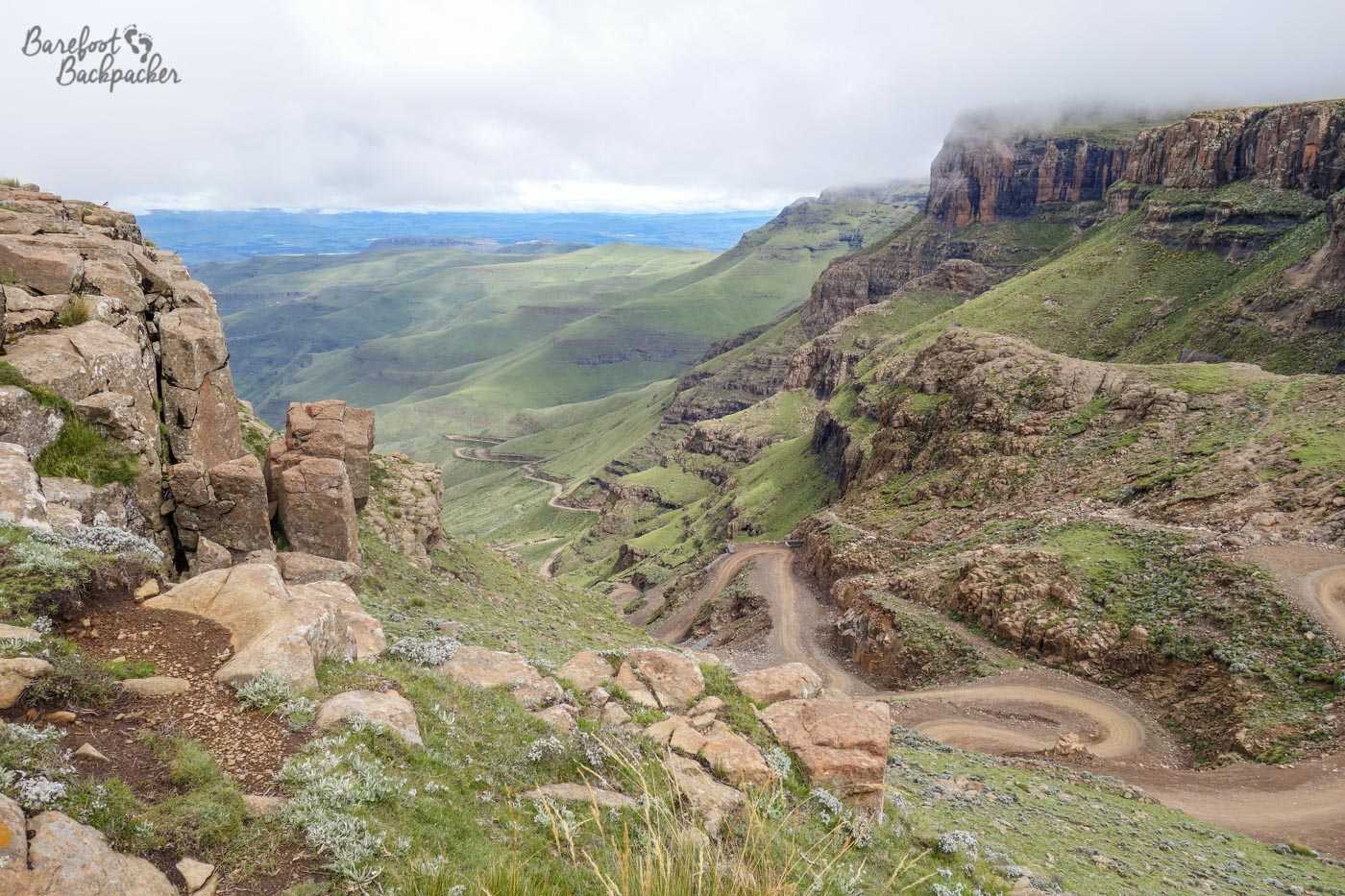 Assume that your plans are to go down the Sani Pass into South Africa. Let me also assume that you’re doing the journey by public transport, as opposed to your own car, motorbike, or, if you’re really hardcore, bicycle.

As I say, most people visiting Sani Top seem to do so as an overnight trip from South Africa, The lodge provides transport twice a day, at 9.30am and 1.30pm, down the hill (with a corresponding service uphill) so that people coming from South Africa don’t have to drive up the pass – which in the last couple of km before the border post was, when I descended anyway, little more than a very steep gravel snake. The cost of this service is around 300 Rand, and they will take you all the way to Underberg. 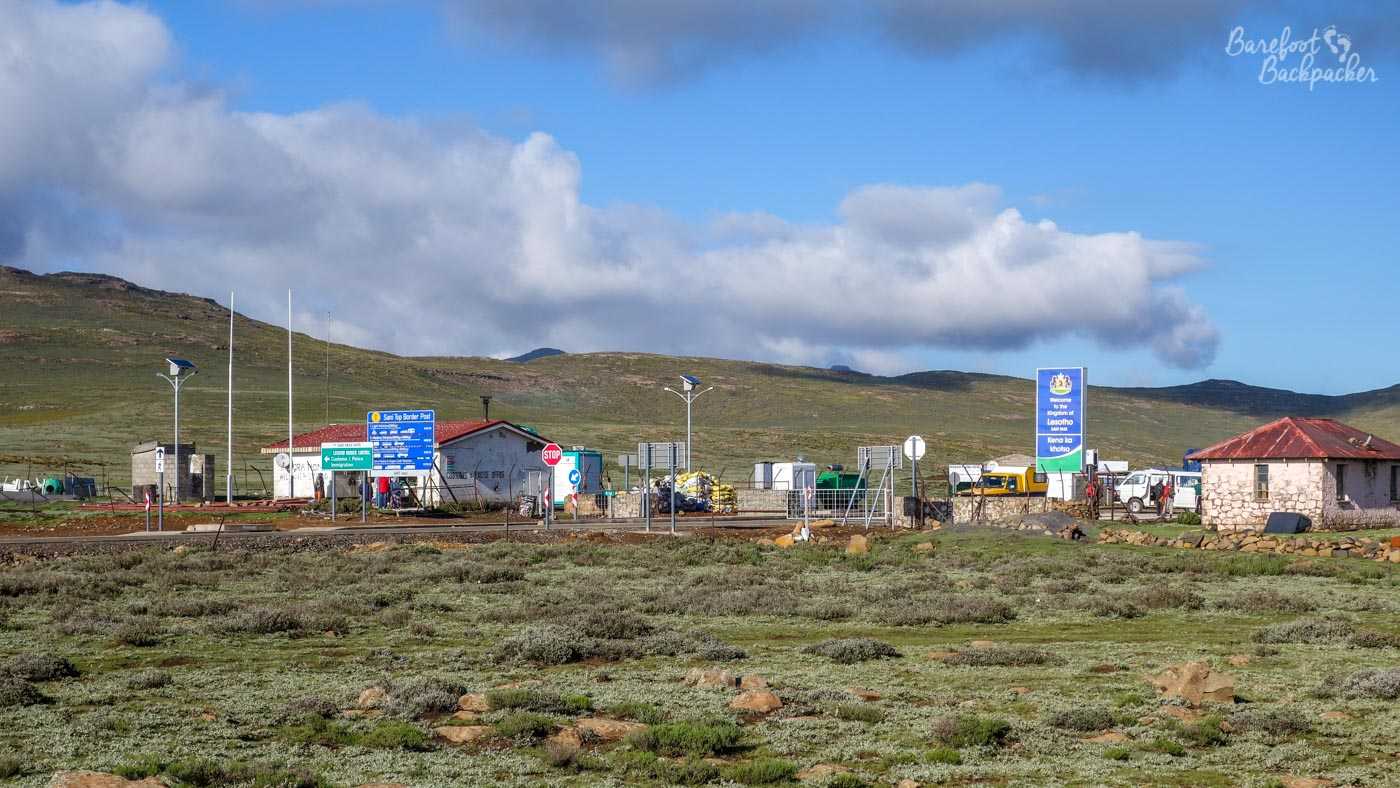 The Lesotho Border Post, at the top of the Sani Pass.

If the price rises to 500 Rand, take it. If it ever reaches in the region of 2000 Rand, grumble discontentedly, and take it anyway. This shuttle will be the saviour of your feet / sanity.

Though the minibus combi taxi from Mokhotlong is an easy & cheap way to get *to* the lodge, it leaves when full (and it’s very popular), and there is absolutely nothing of civilisation between the two points. This means when they reach the border post, they’re still full. This means you could be waiting many hours to get a lift. 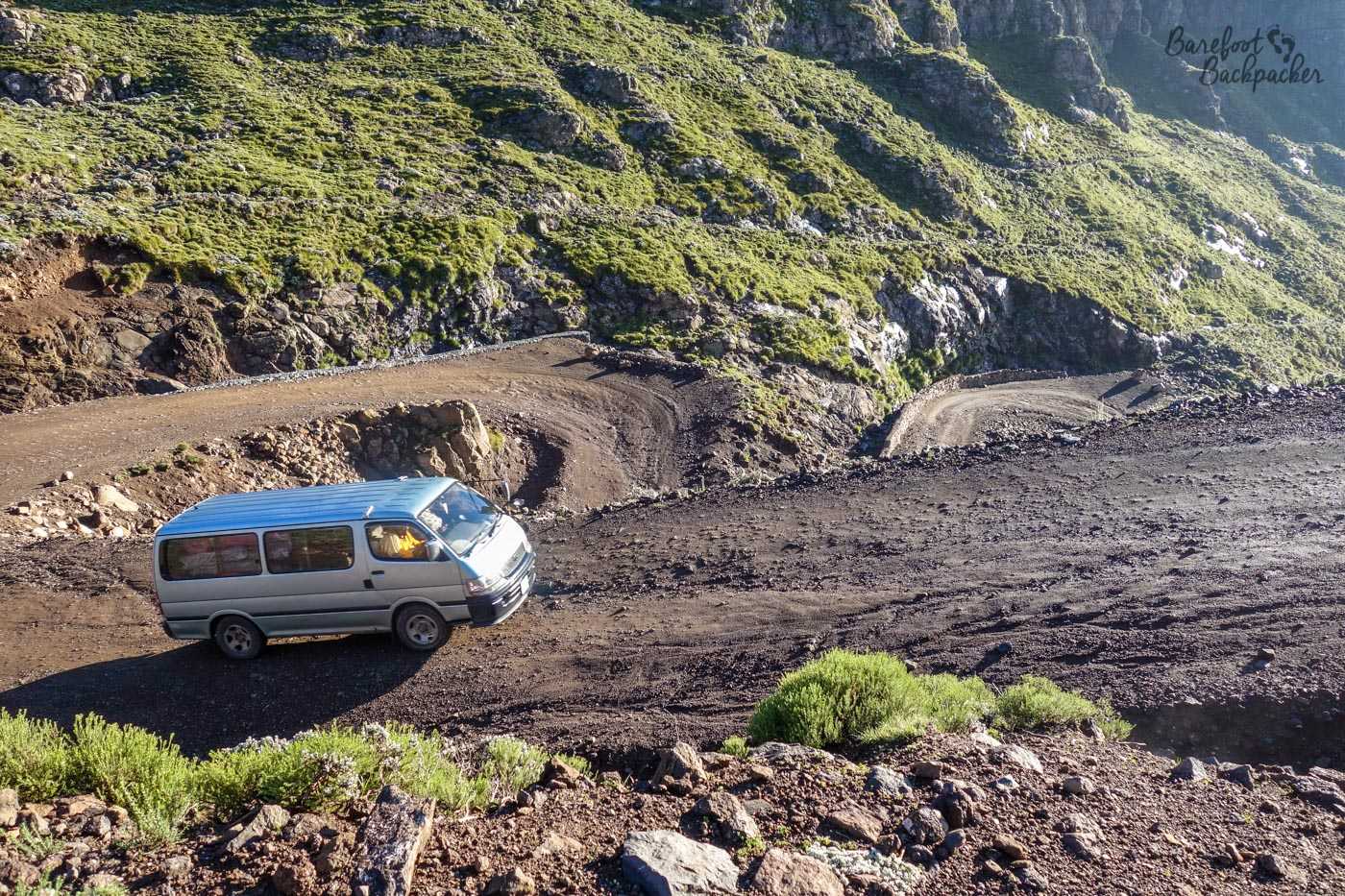 The minibus from Underberg is almost at the top of the pass.

Given that, as stated earlier, many people visit Sani Top on an overnight trip using the shuttle, hitch-hiking becomes almost impossible as the road, certainly early morning, sees incredibly little traffic, certainly going downhill. A handful of Landrovers, service vehicles, and empty combis ply the route up (as well as, on my trip down at least, one, lone, foolhardy, cyclist!), but going down all that runs is the occasional, full, combi. 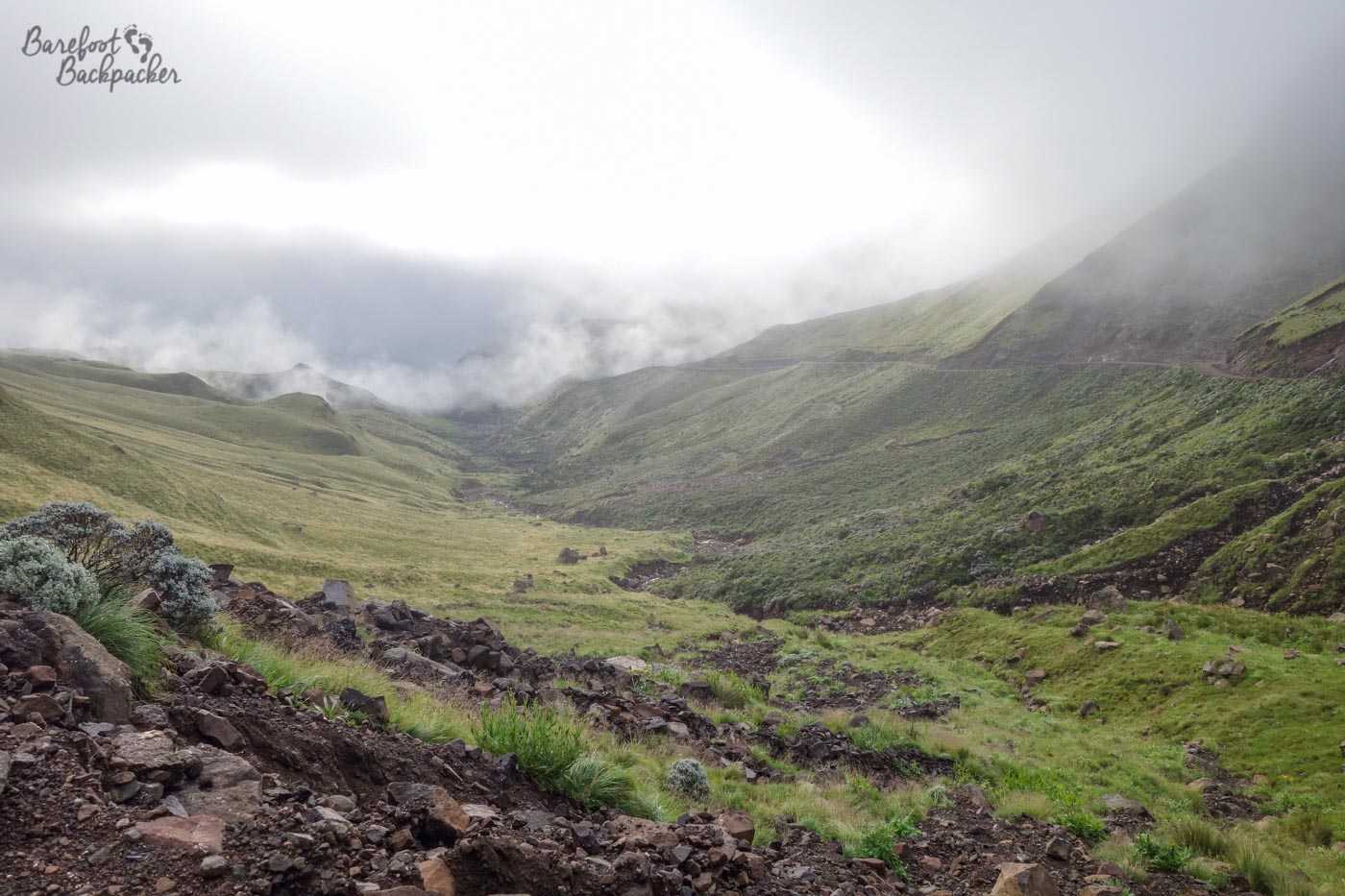 The road rides just above the river valley, curving as it meanders, heading down deeper into the fog.

Ah, but, you might say, I’ve only mentioned the Lesotho border post. What about the South African one? Surely there is some traffic waiting down there to cater for intra-border traffic? Well, apparently not – the South African border post is 8km down the pass, and consists solely of a couple of admin buildings and a gate. The nearest civilisation, the Sani Pass Hotel, is a further 13km down the now very muddy, gravelly, undulating, road. 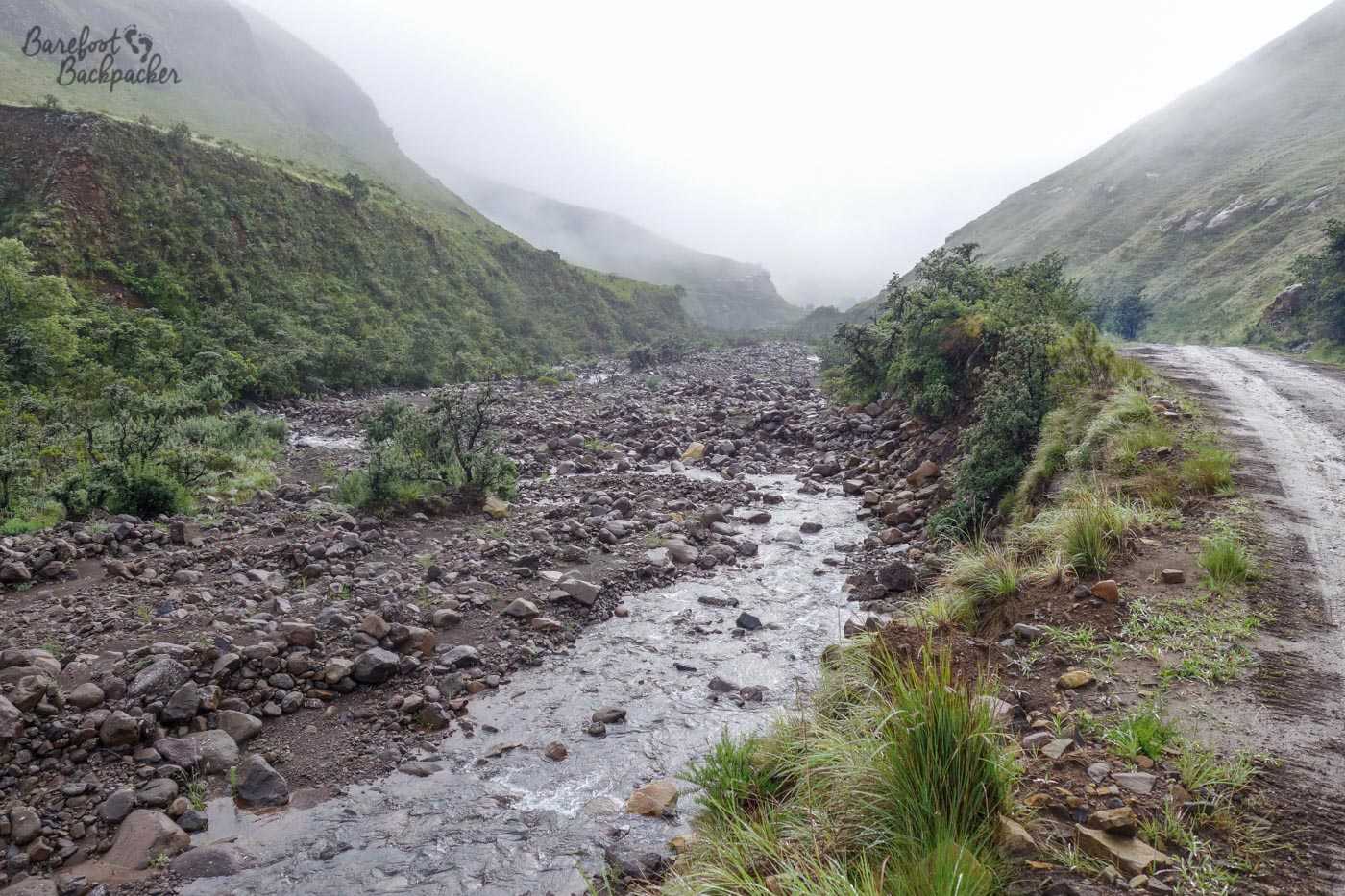 None of this, of course, I knew when I woke up in the morning, and crossed the Lesotho border post at 6.20am quite bouncy and breezy, enjoying the early morning mist and cooler temperatures, to set off to walk down the Sani Pass, hopeful to soon pick up, if nothing else, a Combi which had shed passengers. 3 hours and 40 minutes later, and I staggered into the reception of the Sani Pass Hotel, in desperate need of water, my trousers caked in dried mud, my heart beating rather eccentrically, in desperate need of a sit down. The taxi they booked me for the short hop to Underberg was the best 160 Rand I’d spent all trip …

In saying all that though, it’s a very worthwhile route to take. Would be excellent on a motorbike. That first 8km, through no-man’s-land, is incredibly steep and winding. You can see the road curl round in front of you as it weaves around every single hill, snaking its way down alongside the river (the Mkhomazana), occasionally passing through small fords. Apart from those, this section is quite stony, so that does mean it stays reasonably dry,

Past the South African border post, the road is flatter and straighter, but also muddier. The steep hillsides have given way to a fairly narrow valley ploughing between the hills, and the bends are more gently sweeping than tight hairpins. There’s a couple of buildings along this stretch, though mostly quite dilapidated. It isn’t until you finally leave the mountains, a km or so from the Sani Pass Hotel (under no circumstances get the two mixed up!) that you reach both open farmland. On my visit, this is where the tarmac finally started, but my understanding is that they should have resurfaced the entire route up to the Lesotho border post about now.

In a straight line the distance between the top and bottom of the road isn’t that far, but because it twists and turns so much, and because of its steepness (it reaches 1-in-3 in some places near the top), it feels a lot further than it is and it saps far more of your mental and physical energy than you’d expect; the whole 23km journey from the Lesotho border post to the Sani Pass Hotel at the bottom drops by just over 1,300m, or almost the height of Ben Nevis, and the the 8km between the two border posts alone is an altitude change of around 900m – comparable to the highest peaks in England.

Weirdly, though it closes sometimes in Winter, it does so far less often than the Snake Pass between Sheffield and Manchester … 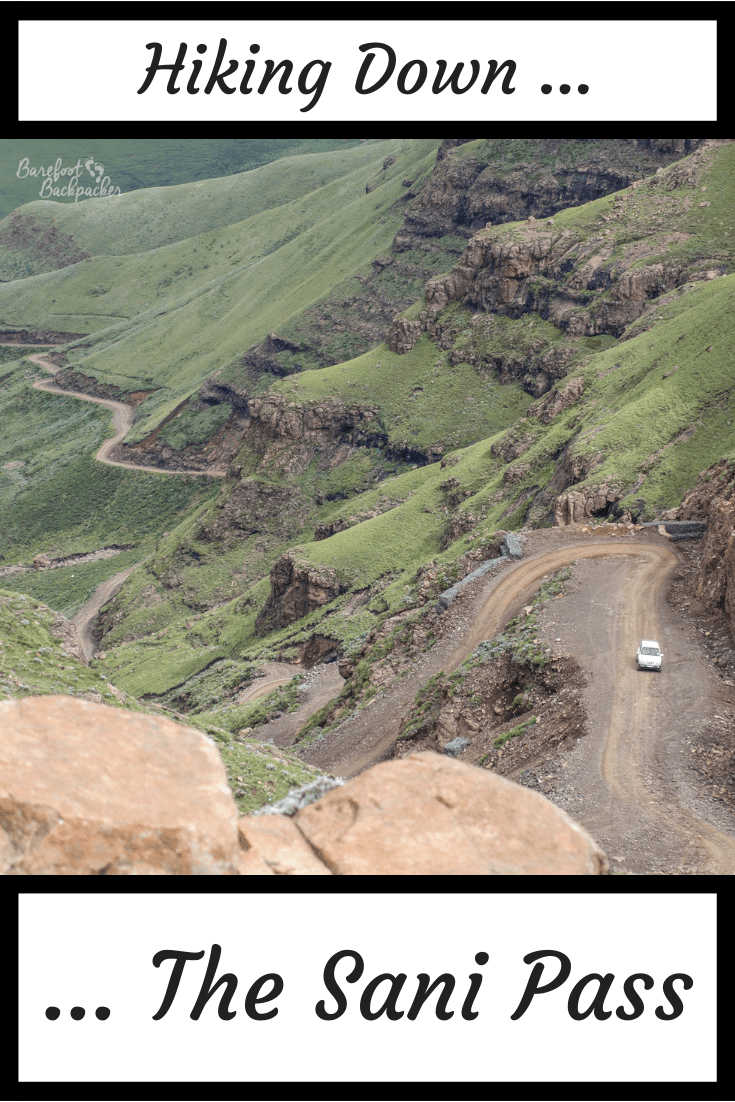