I spent two nights in Sofia, but while I was there I took a day trip to the nearby city of Plovdiv – two hours away by hourly coach, so it’s an easy trip to make.

Plovdiv has a reputation for being a bit more ‘laid back’ than Sofia; one of the things that was evident on my visit was that Plovdiv city centre appeared to be more populous than Sofia, with plenty of people in the streets; shopping, eating in cafes – indeed there was even an ice-rink in the centre. Sofia, despite being the capital, felt much quieter – maybe people leave at the weekend to visit other places out-of-town?

Like Sofia, Plovdiv has been inhabited for several thousand years, and again it was the Romans who primarily made the city (then called Philippopolis) into the thriving metropolis that survives today. Roman ruins are scattered around the town, including one of the largest stadiums/circuses in the Roman world that’s inconveniently situated directly underneath the main shopping street – a small part of one end is exposed and on show but to excavate the remainder would require wholesale destruction of most of the city centre … 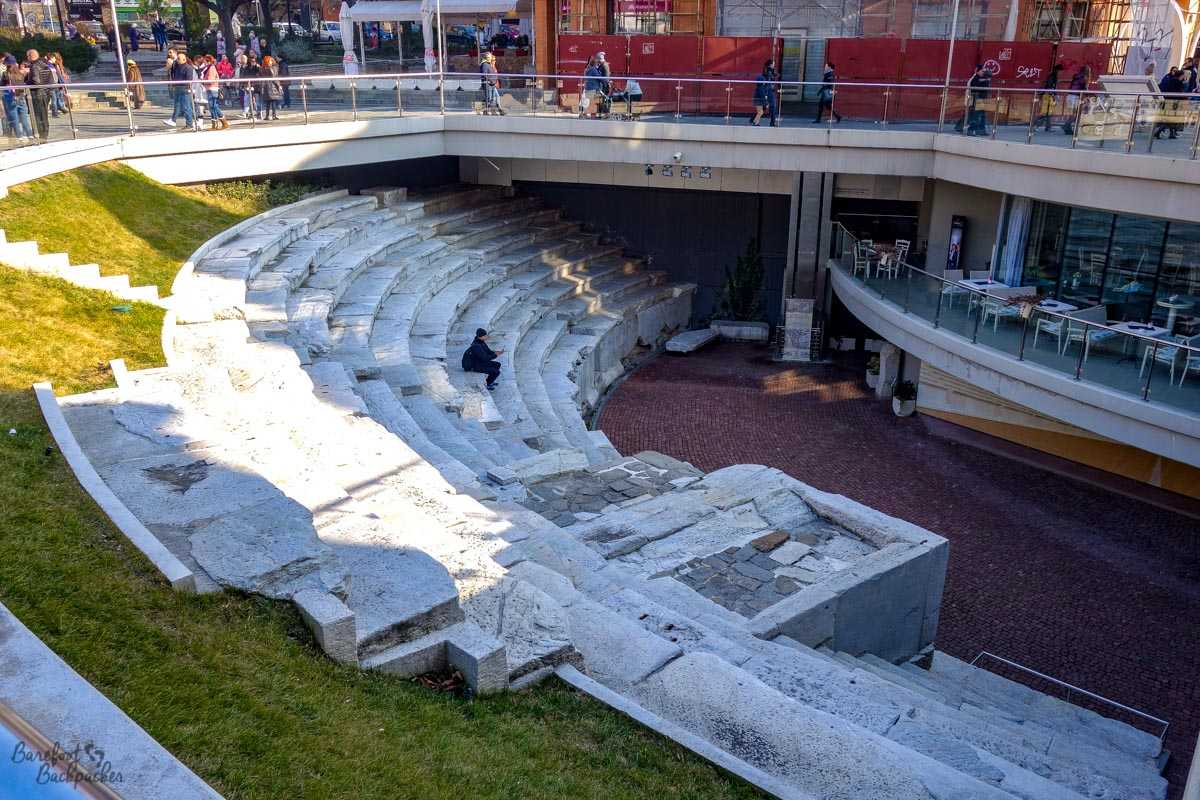 Part of the Roman stadium in the centre of Plovdiv. The main high street directly covers the rest of it!

Another Roman site is the amphitheatre, built in a natural cleft between two hills – due to the layout of the land it was never a full-sized theatre but the hillsides served as a natural setting for the banked stands, so swings and roundabouts. Excavating this site didn’t require too much destruction at contemporary ground level, and where possible, the ruins have been pieced together, jigsaw-like, in situ. Those pieces that didn’t fit have been laid out towards the (modern) entrance, like some kind of ‘odds and sods’ box. The theatre is still used today, with the likes of Sting performing (he tends to like these sorts of places, it seems). 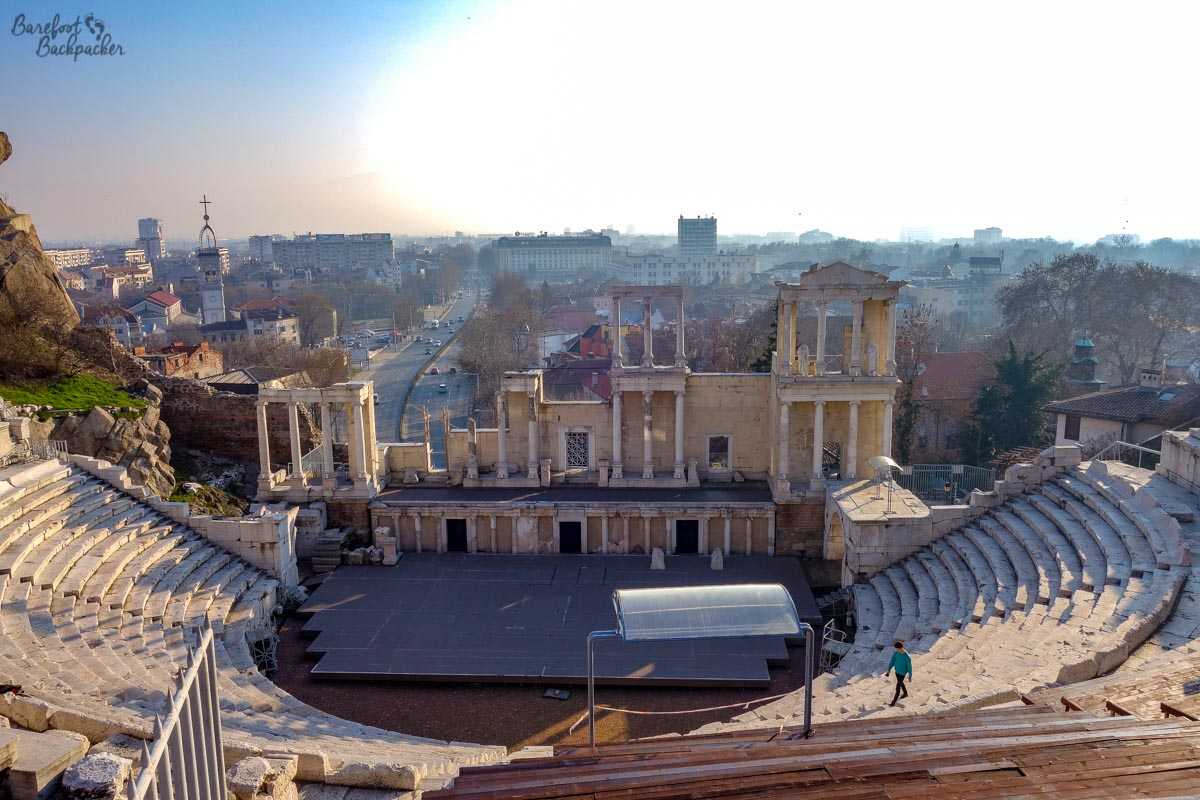 The reconstructed remains of the Roman amphitheatre between Plovdiv’s hills.

Plovdiv was originally built across three hills (it claims seven, as world class cities like Rome, Sheffield, and Amman tend to be, but the bulk of the city was built on merely three), and at the top of one of them (Nebet Tepe) there are ruins of old stone buildings scattered across the top with no rhyme nor reason. It’s believed people have been living on this site for upwards of 5,000 years, though it’s likely the foundations visible are much more recent. It does provide a great spot for looking out over the city though. 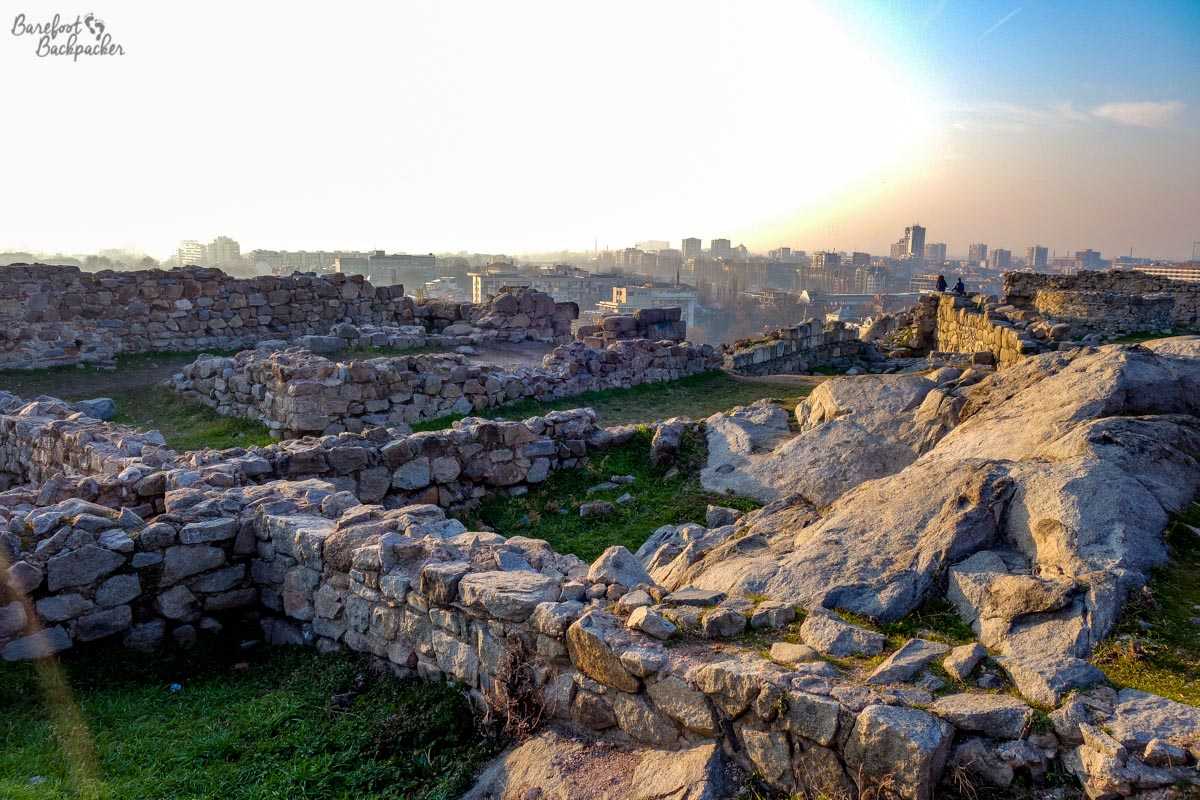 View from the top of, and showing the ruins at, Nebet Tepe.

On the hills is the ‘Old Town’, a series of steep cobbled streets lined with Ottoman-era houses that served primarily as the homes of the rich traders. Many of these large buildings survive today as houses, shops, restaurants, and hotels, their shuttered frontages laden with painted decoration – this isn’t a repair job but exactly how they were built in the first place. 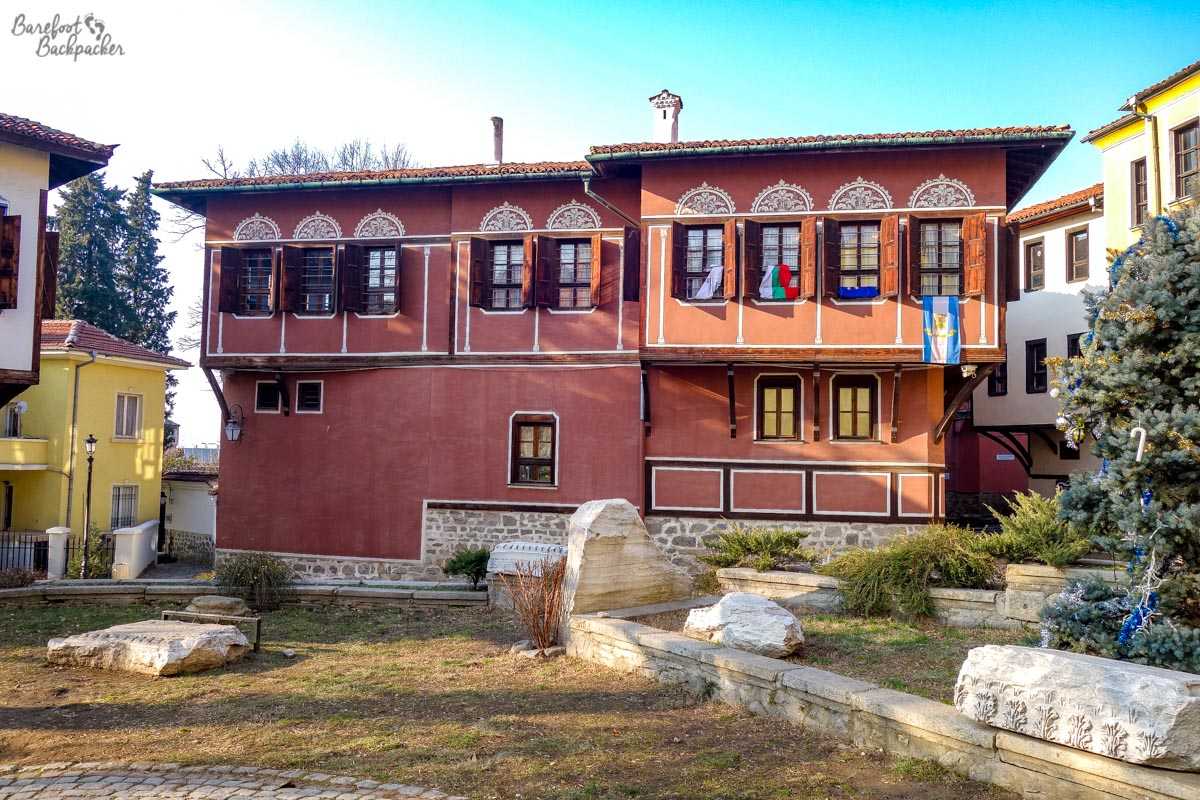 One of the typical Ottoman-era buildings in the Old Town area of Plovdiv. 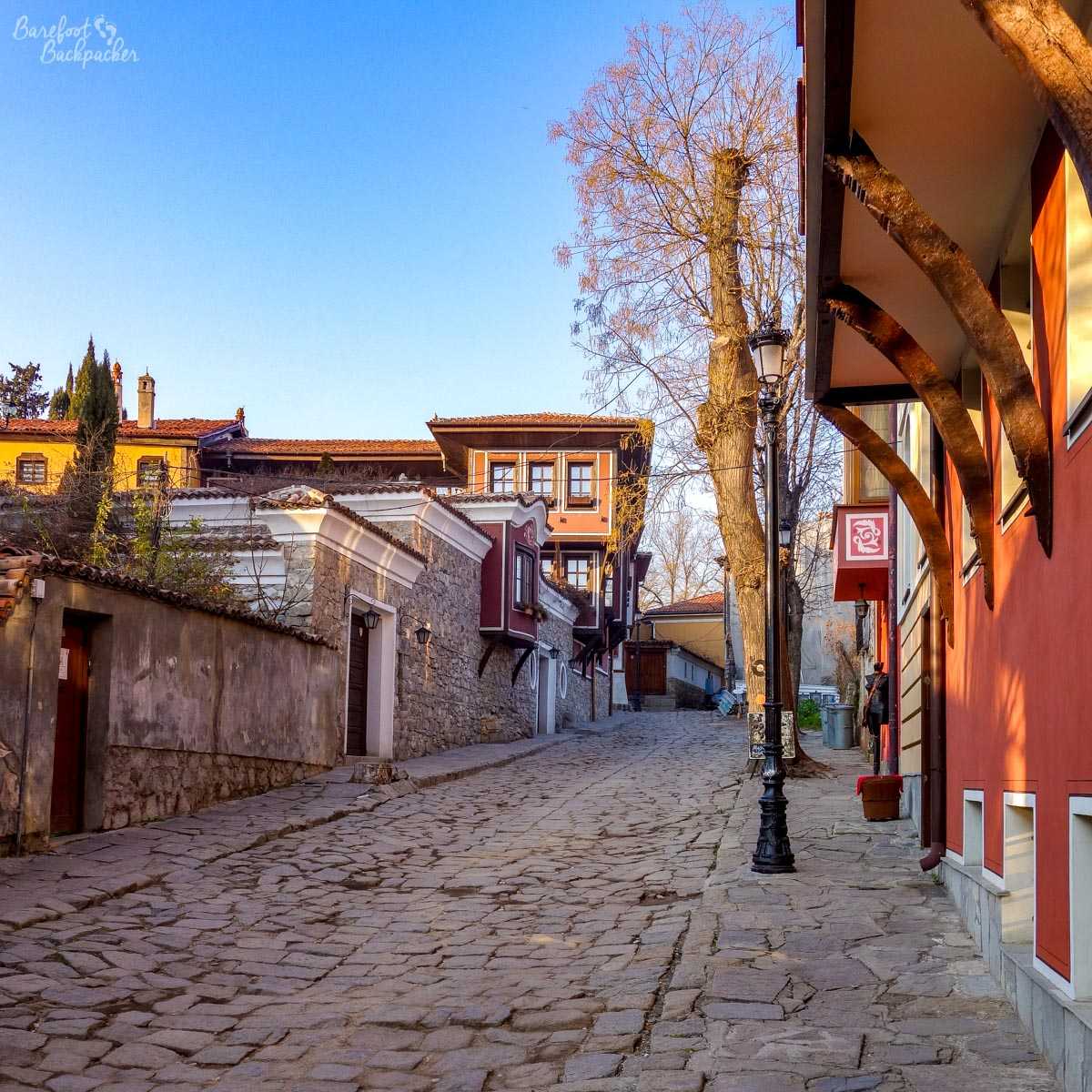 One of the typical cobbled streets in the Old Town area of Plovdiv.

Hidden behind a wall (so that, as mandated by Ottoman Empire rules on non-muslim religious buildings) lies a small but cute Orthodox Church, dedicated to “St Constantine and Helena” (where St Constantine is Constantine The Great who was the first Christian Roman Emperor, and Helena was his mother). There’s been a church here pretty much since the days of Constantine, but this particular building is much more recent (about 150 years old); despite this it has the look and feel of somewhere much older, and is in fitting with the local area. One of the new additions is a bell-tower just off to the left; the church never originally had one and obviously during the Ottoman period it wasn’t allowed to have one. 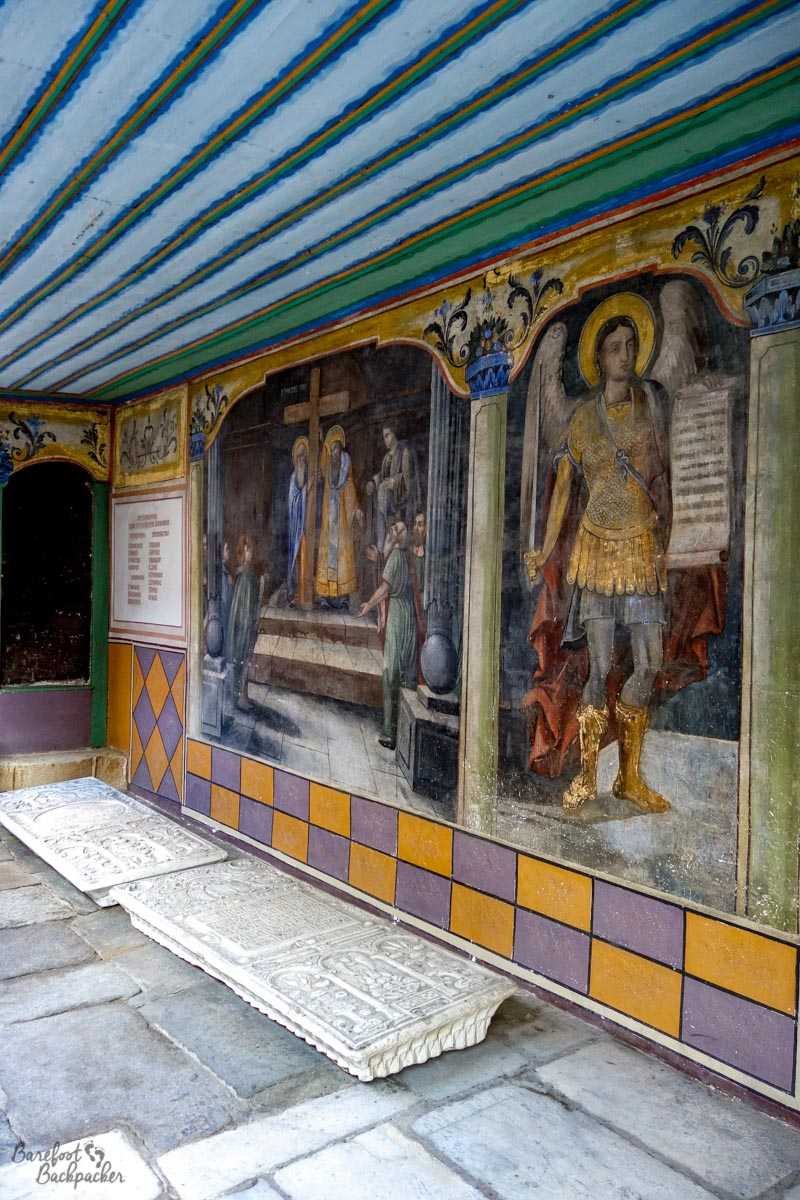 Fresco art on the outside wall of St Constantine and Helena Church.

Below the Old Town is the district of Kapana, a central district which in Ottoman times was the artisan quarter. A series of narrow twisty lanes without signposts, its name literally means “The Trap” as it was one of those places to lure people in and get them lost. Much of it was made of wood and burned down in a fire at the start of the 20th Century; after a period of dereliction it was saved from demolition and refurbished by the artistic community and now houses a series of cafes, street art, and yes, artisanal shops. 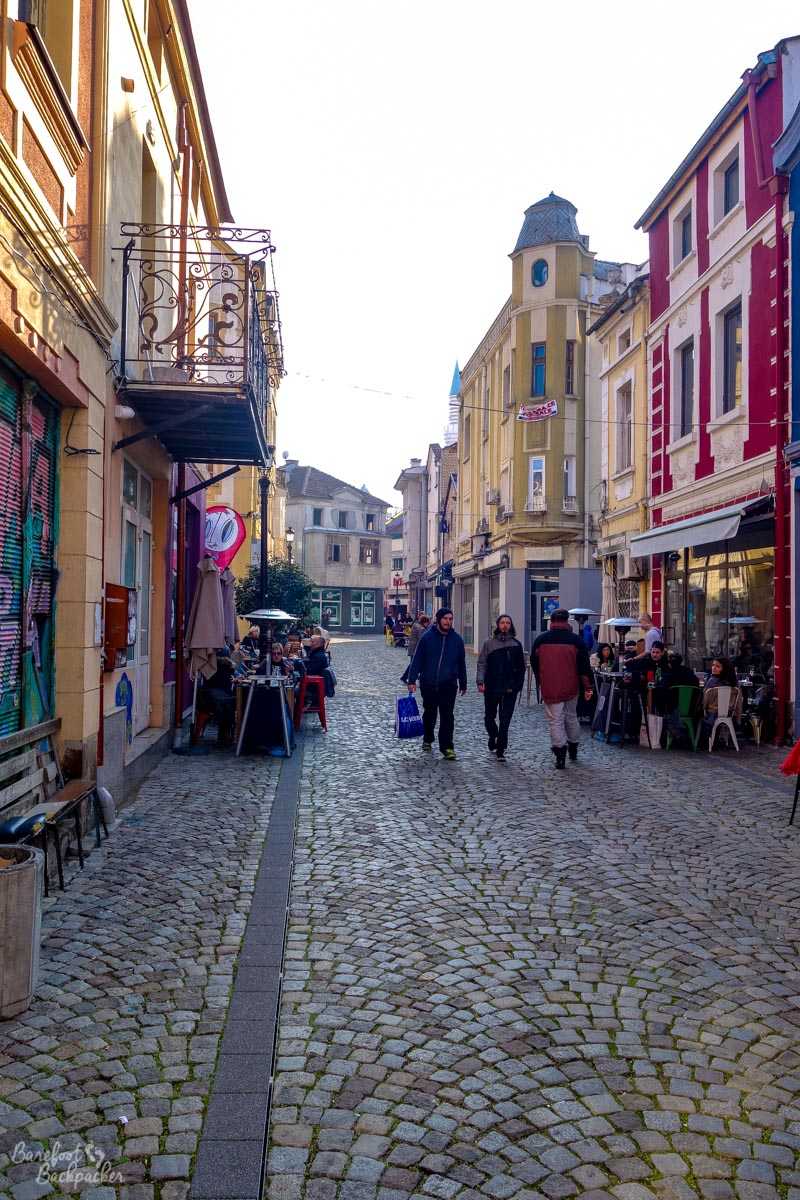 One of the streets in the Kapana district of Plovdiv.

On my visit, preparations were beginning to get underway to celebrate Plovdiv being one of the European Cities Of Culture for the next year – apart from highlighting and improving accessibility to the ruins, the Kapana area will be even more developed into what the local tourist board describe as “a real art centre and a districted [sic] dedicated to creative industries”. 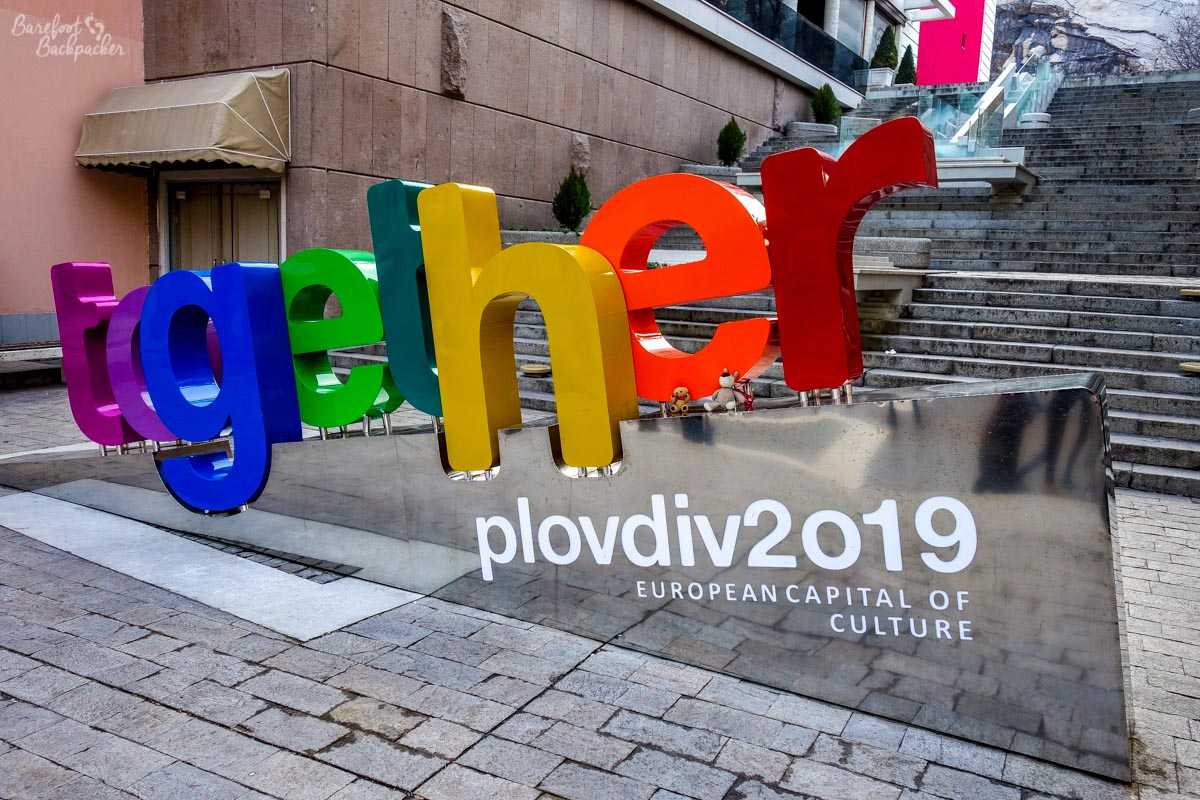 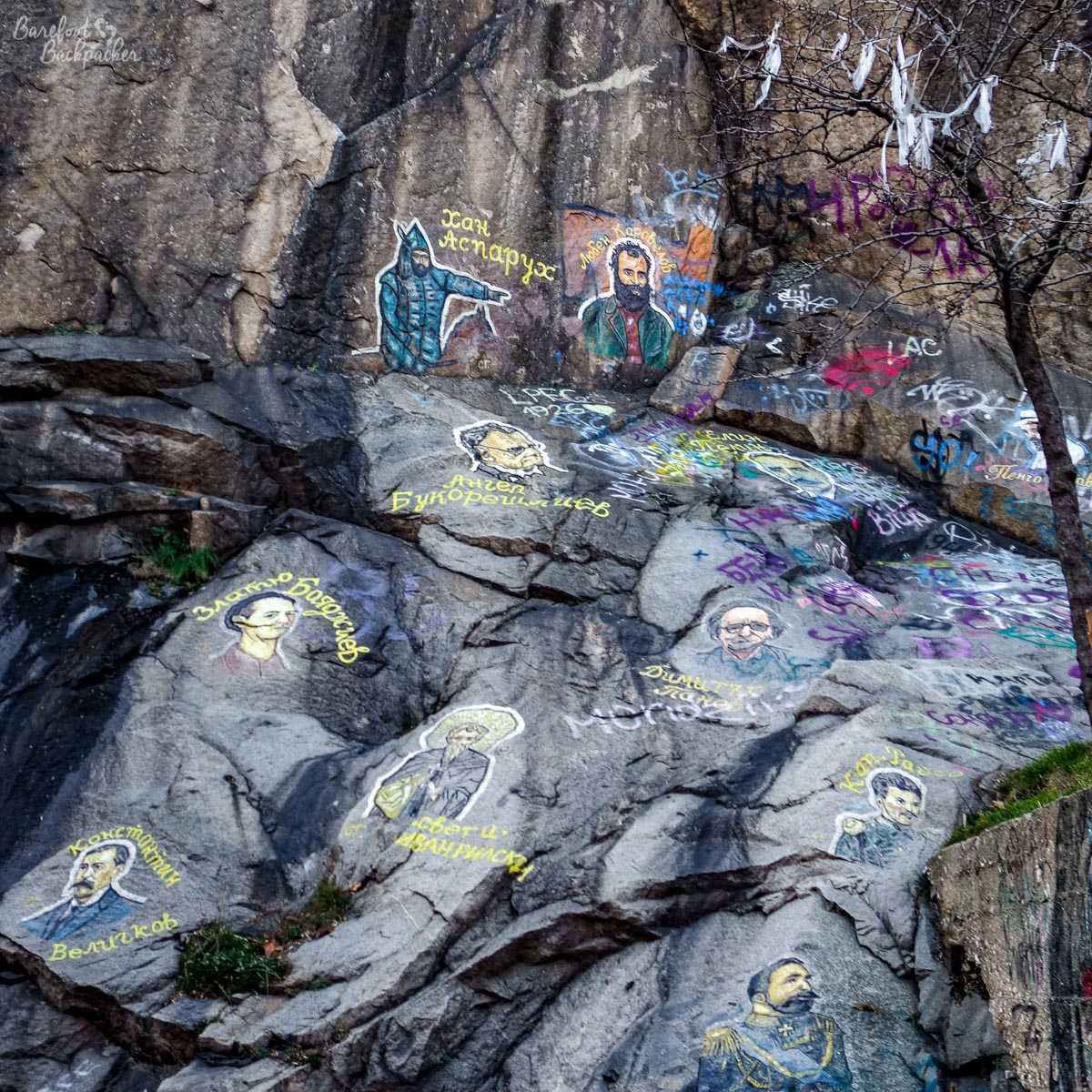 An example of the painted faces and designs on the rock face at the bottom of one of the hills in Plovdiv centre.

Plovdiv also seemed to have more visible street art than Sofia; at the foot of Danov Hill are a series of both murals and weird portraits on the rocks. To be honest I don’t know the history behind this but I found it quite interesting. Also curious is the small statue on the main shopping street of a chap called Milo; apparently he was a ‘local character’ – a man, possibly homeless, who walked with a pronounced affliction and used to sing and play music to anyone who would listen. He was seen as harmless and well-loved, and upon his death, the local council installed a statue of him placed at a spot where he used to sit. People rub part of him for luck – one of the (apparently substantiated) rumours about him was that what he lacked in poise he, er, more than made up for in the bedroom, and his groinal area is often used as a lucky charm for fertility. 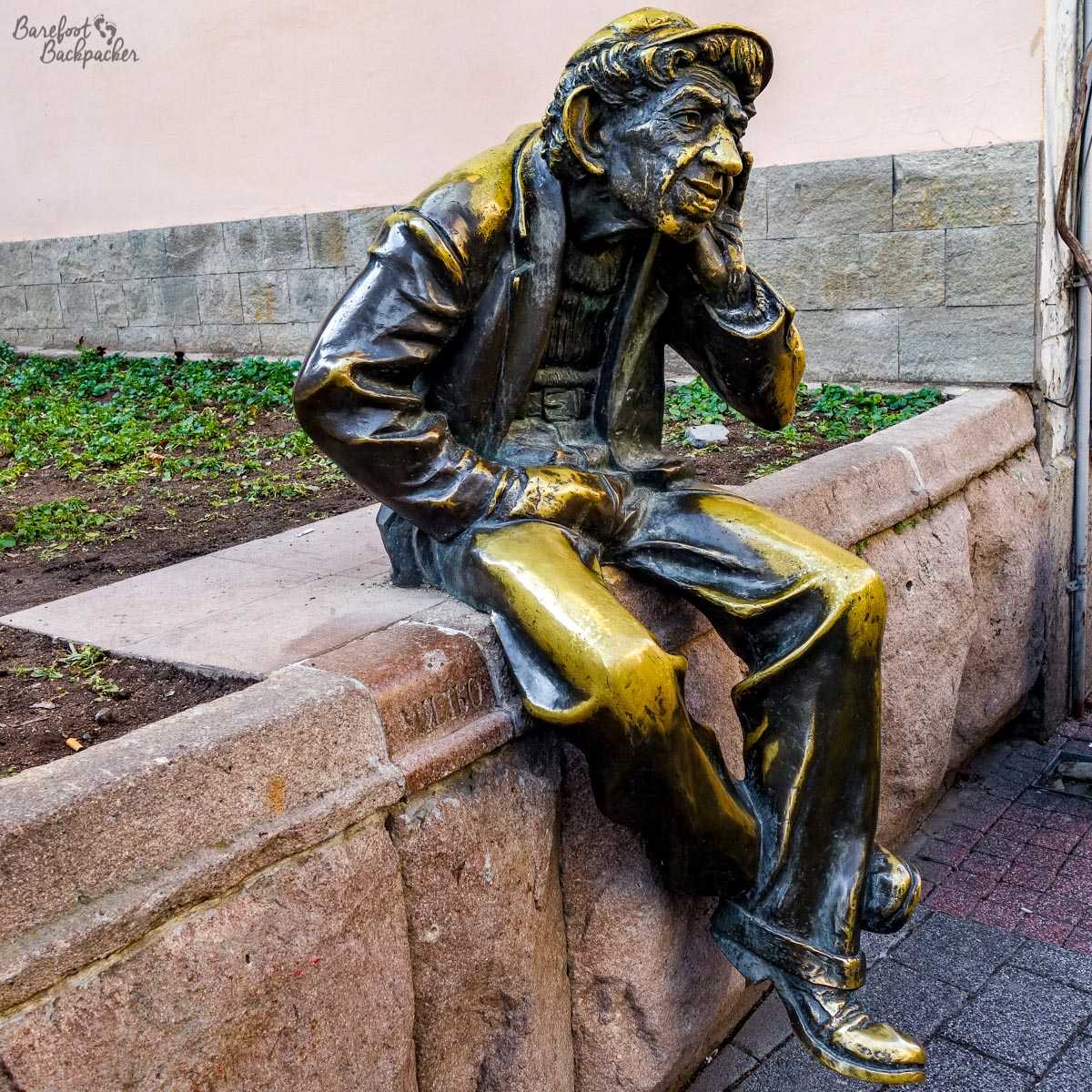 The state of Milo – just waiting for your hand 🙂

Although I was only there for a day trip, there certainly feels enough here to be worth visiting; one of those places that other travel websites (not mine, I’m not that cheesy) may describe as a “hidden gem”.