Botswana – cue images of hippos, elephants, and crocodiles, easily visible on a luxury safari. When places like Mole National Park or the Masai Mara simply aren’t enough and you feel the need to pay that bit extra and go deeper into the wilderness. It also has the added benefit of being traditionally amongst the least volatile countries in Africa – imagine Luxembourg, but with less beer. Well, no, don’t, because that’s a silly metaphor.

To really get a great view of animals, you need to take a trip into somewhere like the Okovango Delta, where the Okovango River spreads out and evaporates in the middle of a vast plain, and consequently is a magnet for all manner of wildlife. It’s in the North of the country, and remote enough that tour operators offer helicopter rides to get deep inside it.

Reader, I am not *that* middle-class, and I did not go there.

Nor did I take a trip into the Kalahari reserve, which covers some 10% of the country, but which I have since found out is the centre of a long-standing issue regarding the rights of the indigenous populations. That’s not why I didn’t go there either; for me it was a combination of time, money, and interest. Because I don’t do safaris.

Rather, on the very North-Eastern edge of the country, close to the quad-point with Namibia, Zambia, and Zimbabwe, is the area known as Chobe National Park. This is apparently the oldest National Park in Botswana and covers an area of 11.7k km², or slightly larger than The Gambia. It also happens to be a convenient spot for day-trips from Victoria Falls and Livingstone, as they’re only a couple of hours away along straight, fast, clear roads. So when it was listed as one of the possible tours I could do though my hostel, it kind of felt like a no-brainer option to take – a new country to visit that I’m unlikely to see again, and even I can manage just a day looking at animals. And besides, what else was I going to be doing on a New Years Day? Car leaves at 6am? No problem … 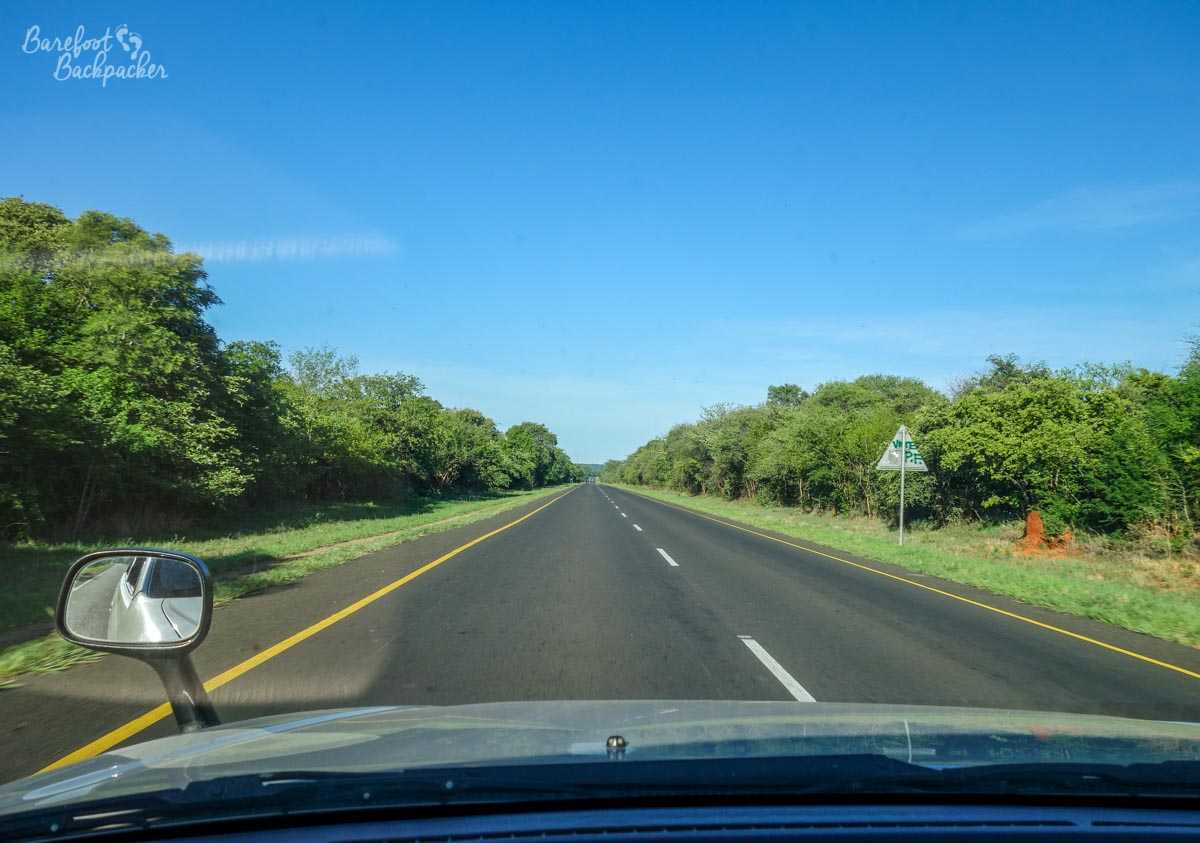 The Zambian countryside, New Years Day, on the way to Botswana.

It was quite a long journey; I was in a group of maybe 12 people but I didn’t meet up with them until I reached the border as they were all coming from different places – to and from Livingstone it was just me, a taxi driver arranged by the hostel, and the open road. It was the middle of summer so it was a bright, sunny, early start and as we sped down the main road the grasslands shone with a fairly golden hue. 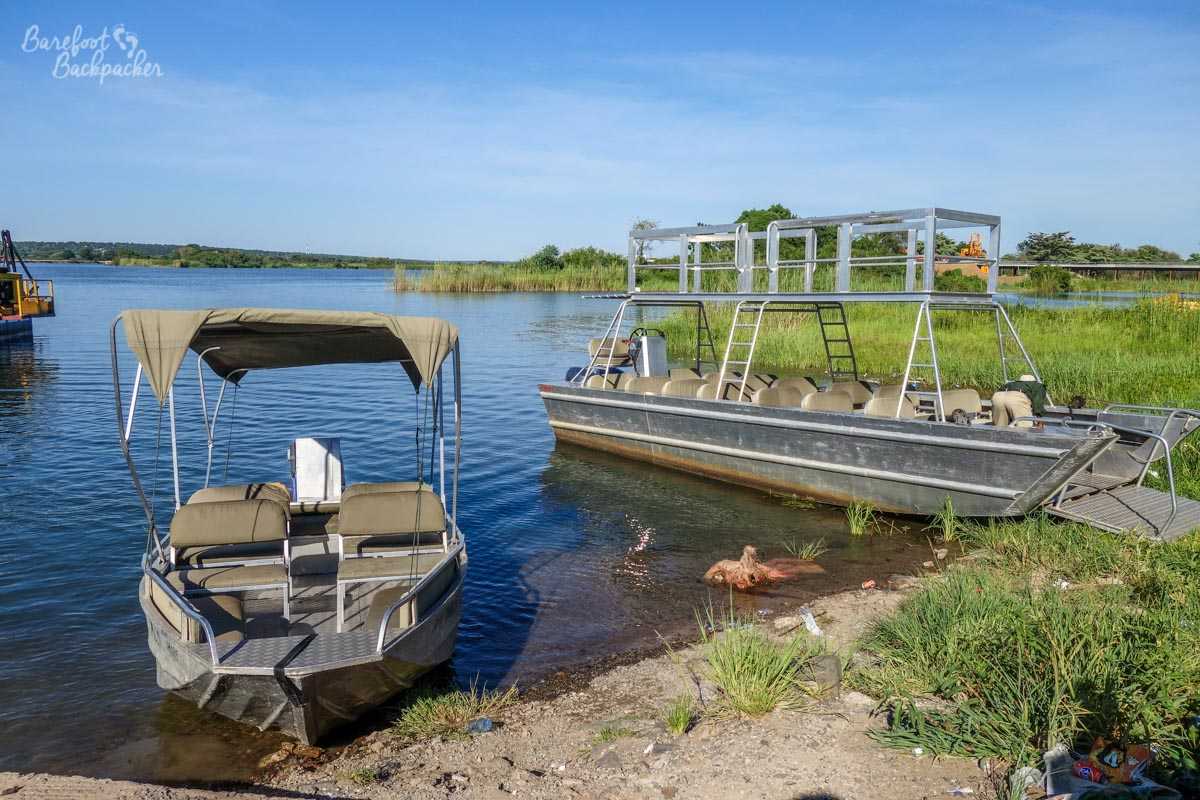 The Kazungula Ferry, on the Zambezi River, in Zambia. We were in the one on the left. It’s probably not what you’d imagine an international ferry to look like.

He dropped me off at the Kazungula Ferry on the Zambezi River, the crossing point over to Botswana. It’s quite an unusual border crossing, as not only is it only accessible by small ferry – there are no bridges here and the road quite literally ends at the river on both sides – but it’s also quite a short border. I don’t mean short across, though the journey doesn’t take more than a handful of minutes (once all the admin’s done of course), rather the width of the border makes it amongst the shortest land borders in the world, at around 300m. To the North-West lies Namibia, whilst to the South-East is Zimbabwe. Interestingly, Namibia itself isn’t very wide at this point north-south – the Kazungula Ferry lies just below the easternmost point of the ‘Caprivi Strip’, a long rectangle of land originally given to what was then German West Africa to allow the latter access to the Zambezi River and therefore trading routes to the East, in return for which the Germans gave the British some small territories elsewhere. Another prime example of why borders are arbitrary and fake. Thus a fifth country, Angola, doesn’t lie too far from here either. 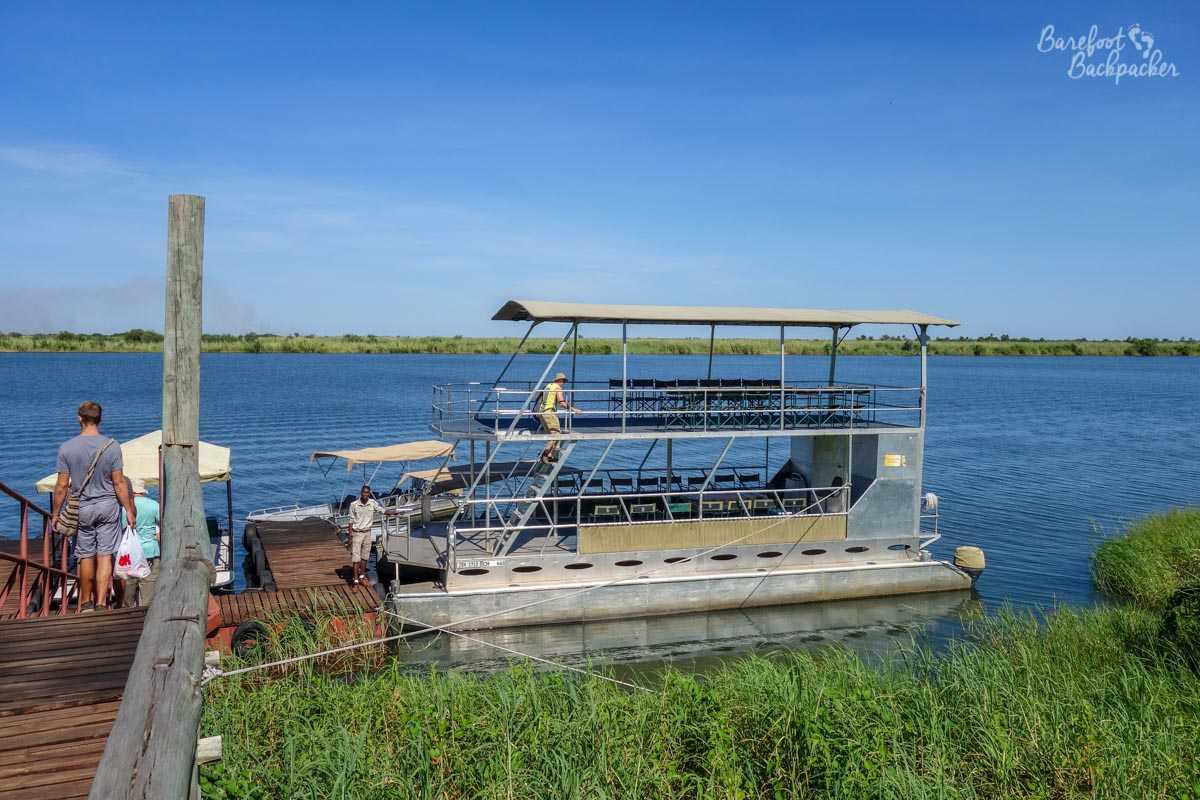 The boat we were on as we sailed along the Chobe River.

Once across the river, we boarded a minibus for the hour-or-so ride to the Serondela area of Chobe National Park, and the small buildings at the centre of the park admin. We were quickly ushered on to a two-deck boat for the first of our two trips around the park – a couple of hours sailing up and down the Chobe River.

The view into Namibia from the Chobe River.

There’s quite an interesting difference between the two sides of the river, that suggest partly different environmental practices – but also remember that the river is an international border too. On the northern (Namibian) side, the landscape is mostly flat, and made up of low-lying grasslands and flood-plains. To the Botswanan south the terrain is slightly hillier and more forested, with far less grass but a bit more bush. 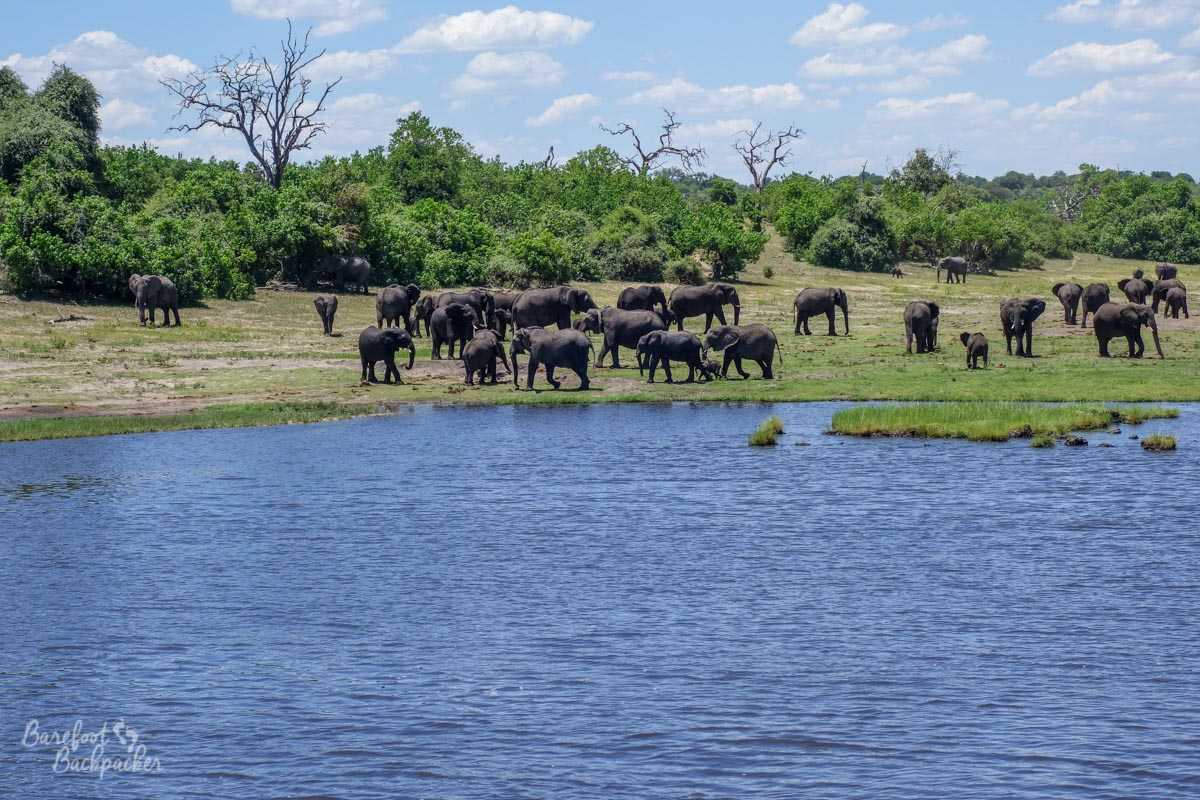 Elephants along the south side of the Chobe River.

The wildlife is slightly different too – on the southern side we saw elephants grazing by the water’s edge, trooping along the shoreline in family units. There were also snakes and some reptiles hiding in the small shrubs on the ground and then disappearing into the river. The north was more populated by buffalo and birdlife, taking advantage of the flatter ground to roam the region seeking prey. 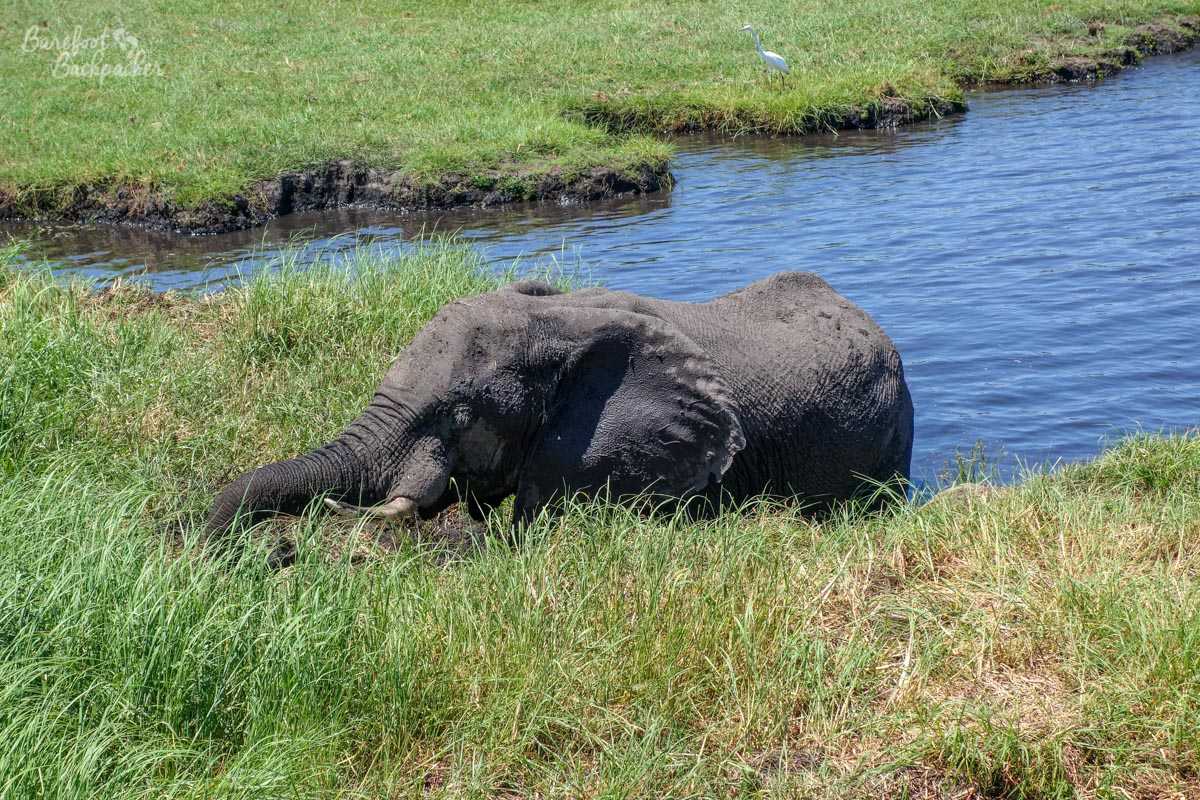 An elephant washing itself in the Chobe River.

In the water itself, paying no heed whatsoever to the intricacies of international politics, were quite a number of hippopotamus. The name comes from Ancient Greek for ‘River Horse’ but you can naff off if you think you can ride one. They are amongst the deadliest creatures in the world to humans, partly because when scared their tactic is to run in a straight line for the water and since for their size (1,500kg, about the same as an Audi A5) they run at a fair whack (30km/h) it’s a bit like being hit by a car, and partly because by all accounts they’re right bastards. 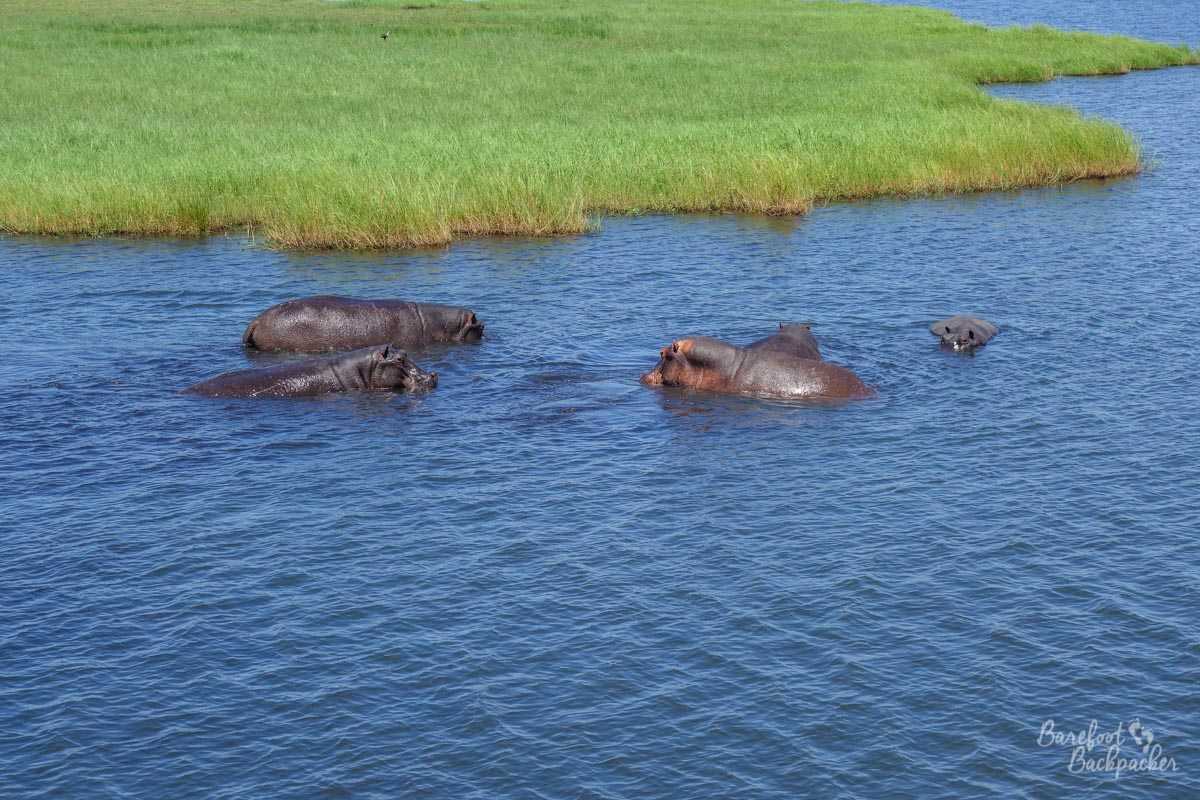 Hippos playing in the water.

One thing I did not know about hippos though that I’ve discovered through research for this blog post is that their closest living relatives aren’t creatures like elephants, or horses, but rather cetaceans – they are, basically, whales or dolphins, but with legs. Which is quite a scary thought. 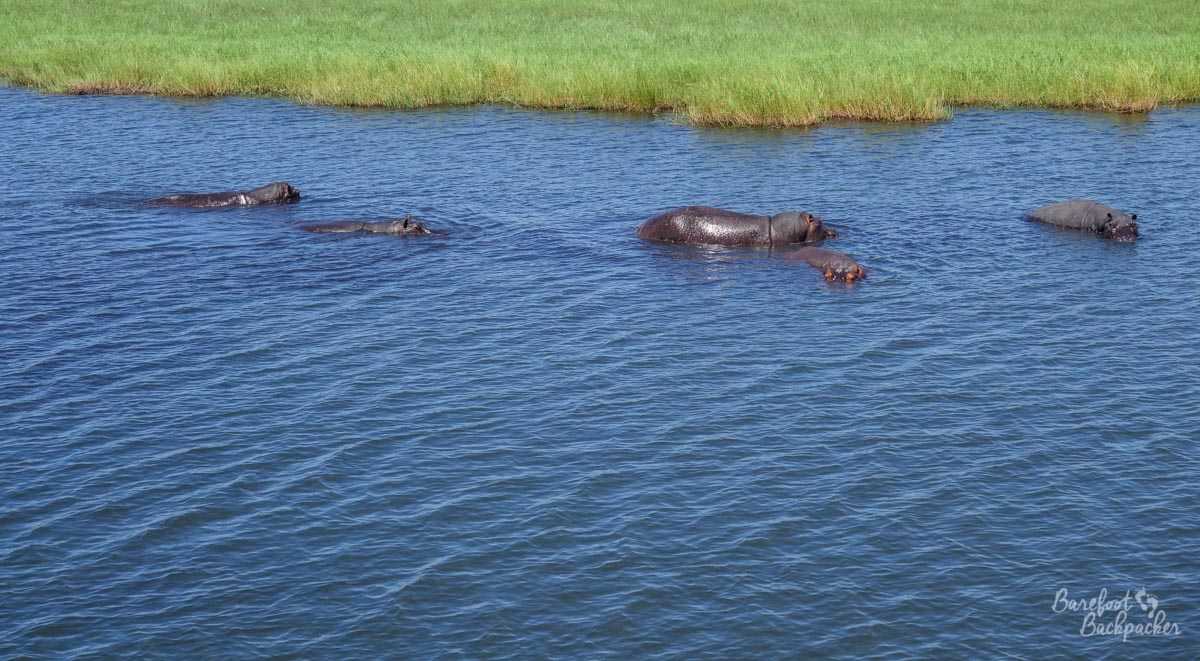 Hippos swimming idly by. They’re not the easiest animal to take pictures of as they’re mostly submerged, tho I do have video footage & maybe one day I’ll publish it.

After getting back to the park centre for a spot of lunch, but not a relaxing dip in the on-site pool because I don’t do those sorts of things (also, it was off-bounds), we set off on the second safari – in a large 4×4 jeep type vehicle being driven around the dusty forested tracks around this area of the park.

I’ve already mentioned the rains were running late in the year of my visit. This is very important to take into account when you go on safari, as the weather conditions in the previous couple of weeks very much determine the sort of wildlife you get to see. Many land-based creatures follow the rains, so in wet seasons they head deeper into the park to stay by seasonal lakes and streams, eating at fresh grass etc. In the dry seasons they’ll tend to stay by permanent water features. 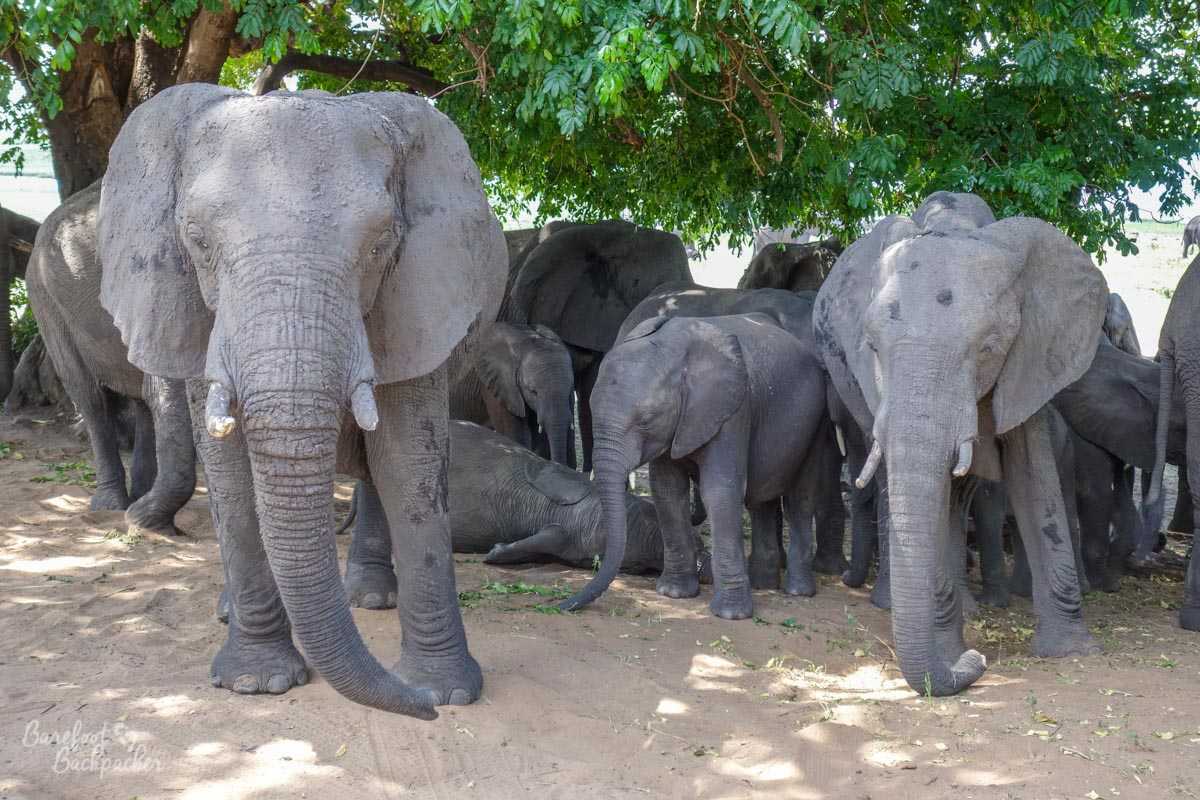 A herd of elephants, literally in the way of the jeep. And I guess they have the right of way.

This explains why, having seen several from the boat, it didn’t take us long on the jeep to encounter a couple of elephants, who by rights at this time of year should have been much further south in the park. And by “a couple” I mean whole families, just standing in the road, blocking our way. I’d already seen an elephant in the wild at Mole National Park in Ghana, but this took it to a whole new level – not just for the sheer numbers but also at how close they were. We could, literally, touch them – obviously we didn’t because, well for one reason we were in a jeep and they’re a pack of elephants. 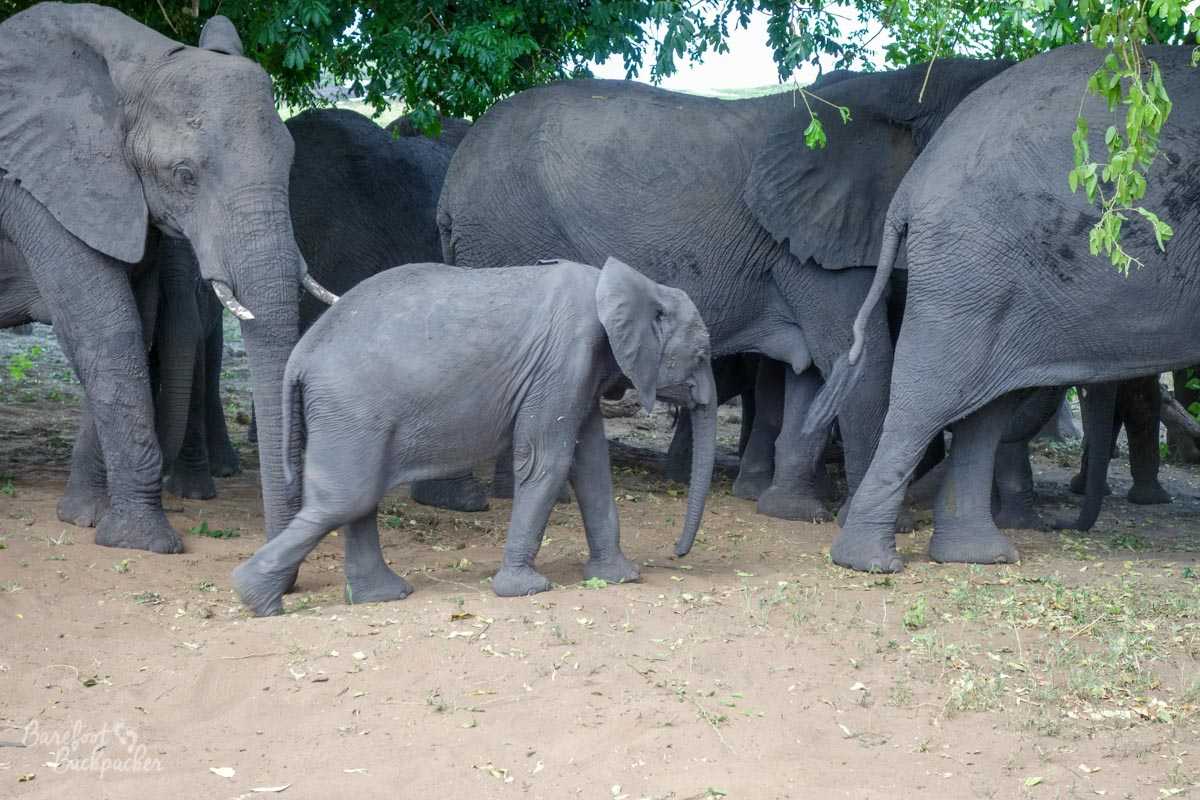 A baby elephant. Still quite big.

It was really impressive to see them up this close; you really get a feel for how large and powerful they really are. I don’t know how many we saw even just in front of us on the road, never mind in the trees on either side, but it was at least ten, including babies. Reader, I say babies, but they’re babies only in terms of age. We were told that a newborn baby elephant weighs 50kg; I’ve dated people who weigh 50kg. 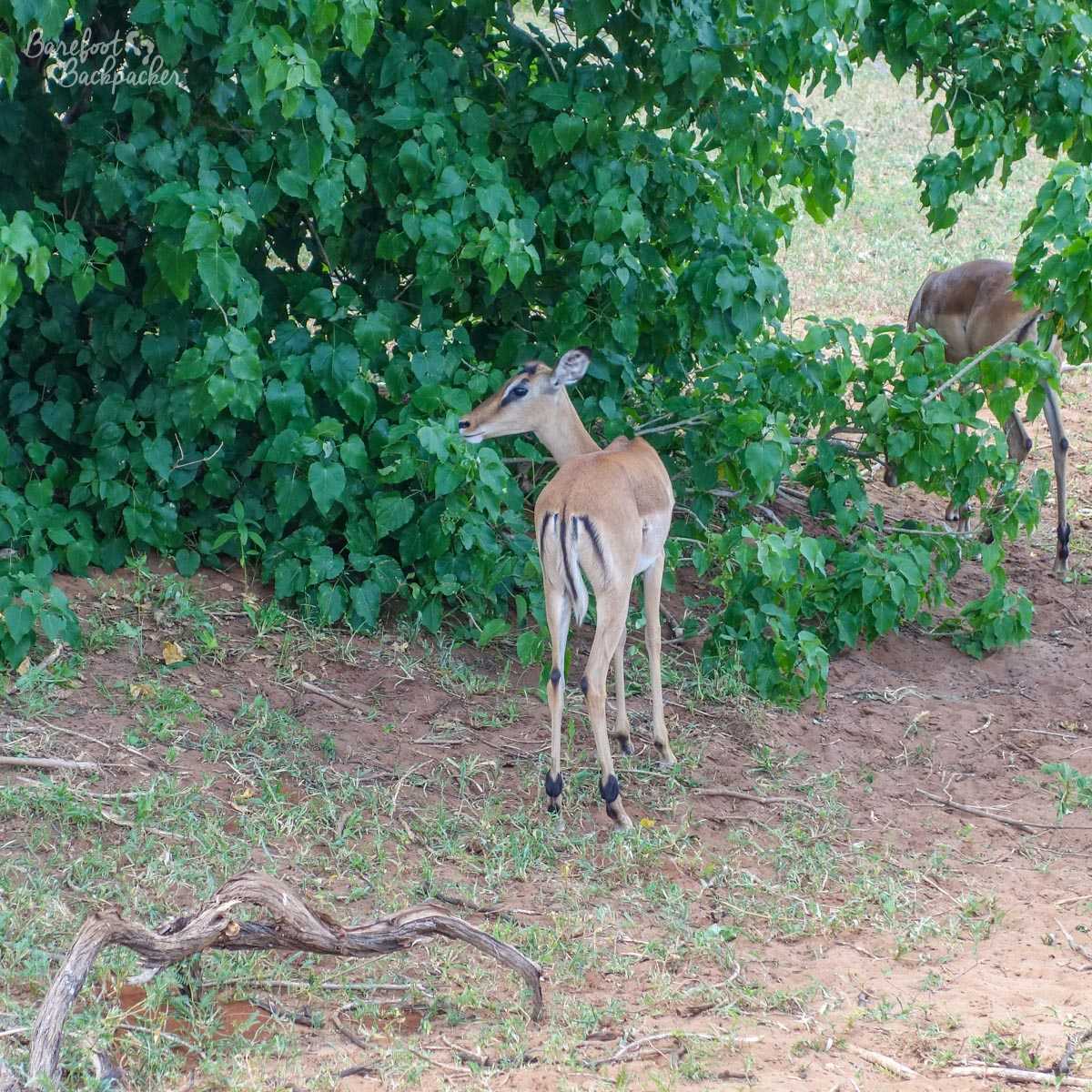 I don’t know what the difference is between a deer, an antelope, a kudu, and an eland. But this is one of them…

We also spotted lots of very pretty birds whose names have been lost to the wiles of my memory, quite a few deer/eland/kudu, and, which made even me squee just a bit as I’d said I wanted to see one, a giraffe. A wild giraffe. Only one, but it ran alongside our jeep for a couple of minutes; that, probably more than seeing the elephants, made my day because it wasn’t something I expected to see. They’re also huge creatures, just in a very different way, but even so the leg-span would still have given the jeep a run for its money. 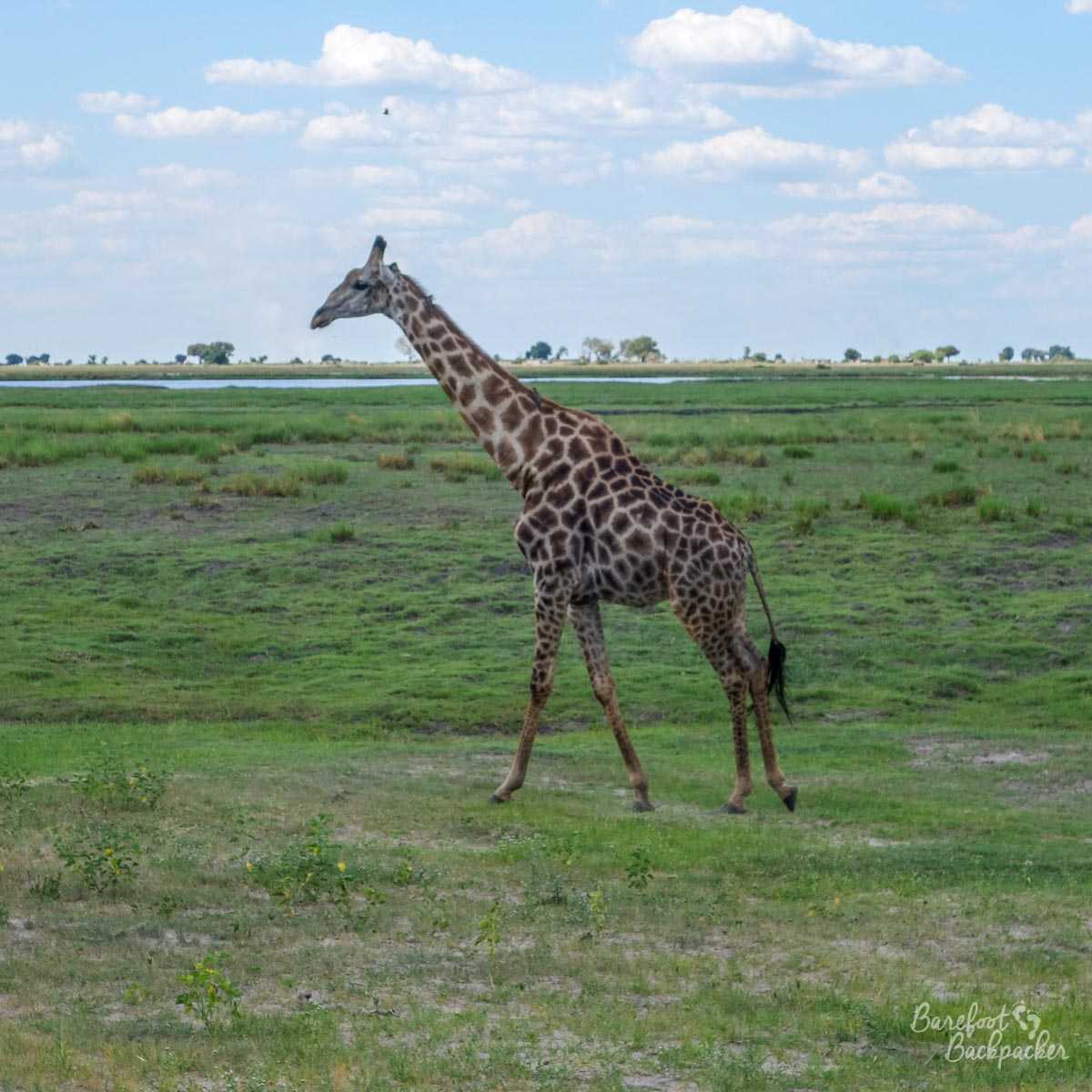 We didn’t see any big cats though; allegedly in the distant bushes at one point there was a cheetah but my eyes aren’t the best in the world, never mind my observation skills, so that one passed me by. There are supposed to be lions in the National Park but I wasn’t expecting to see any of them – they’ll be a little further out and well-hidden, watching.

A herd of buffalo. Impressive more for their size than for the specific animal.

Later on on the ride we did encounter a large herd of buffalo too, just galloping through the plains – they kind of stopped when they saw us on the road ahead of them, and just stood there, staring at us. A true herd. 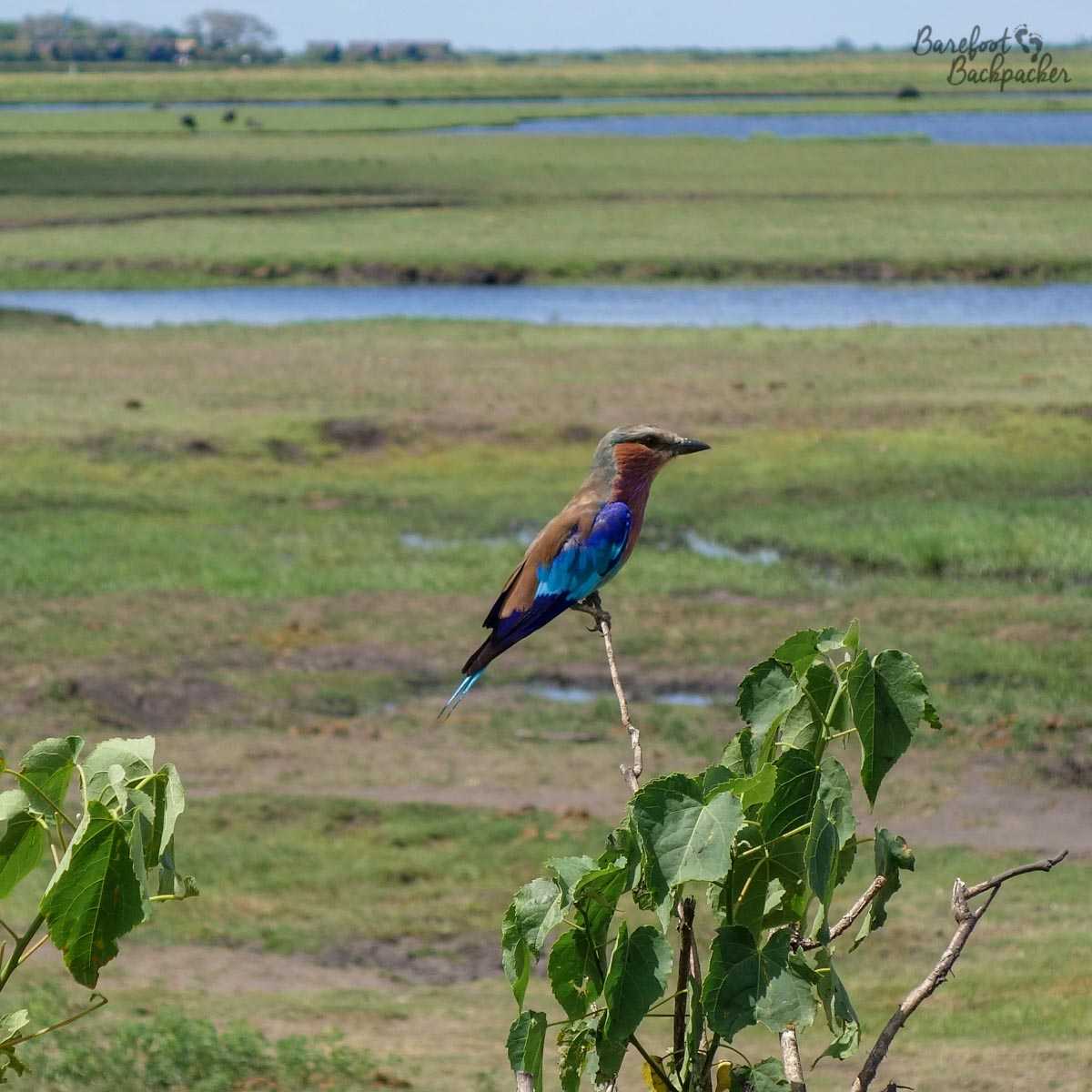 A bird on a twig. Picture taken possibly for contrast, and obviously I have no idea what sort of bird it is. They did tell us, but … you know!

I think in total across both safaris and the stop for lunch we spent about seven hours in the Park, which was a good amount of time I think – enough to have seen everything without getting weary of the plains. The variety of what we saw also helped a great deal I think – it’s not going to convert me to a desire of animal-watching every time I go on holiday, but it’s great every so often to put yourself into something else’s environment and make you think about your place in the world. Plus, animals are pretty awesome really. 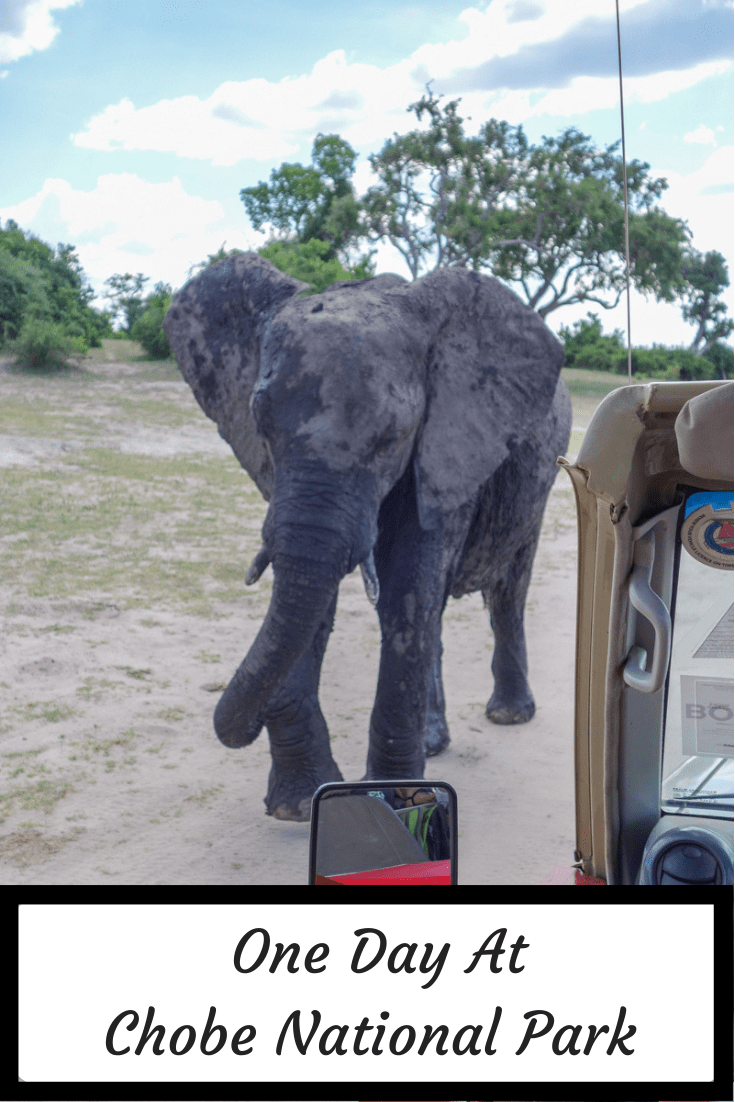