It’s pretty cold; I’m even wearing socks. The sky above, coupled with the flat landscape over the sea, is an astronomer’s dream. Despite the earlier rain-shower, the sand we’re camped on is dry and quite firm. I’m in a large yurt, on my own now as everyone else has gone to bed. Although I have several blankets and a thick sleeping bag, the yurt’s quite well-used and there are gaps in the fabric lining the walls, large enough to let through not only the chill wind, but also the occasional mouse. The desert fox outside should take care of the latter though. 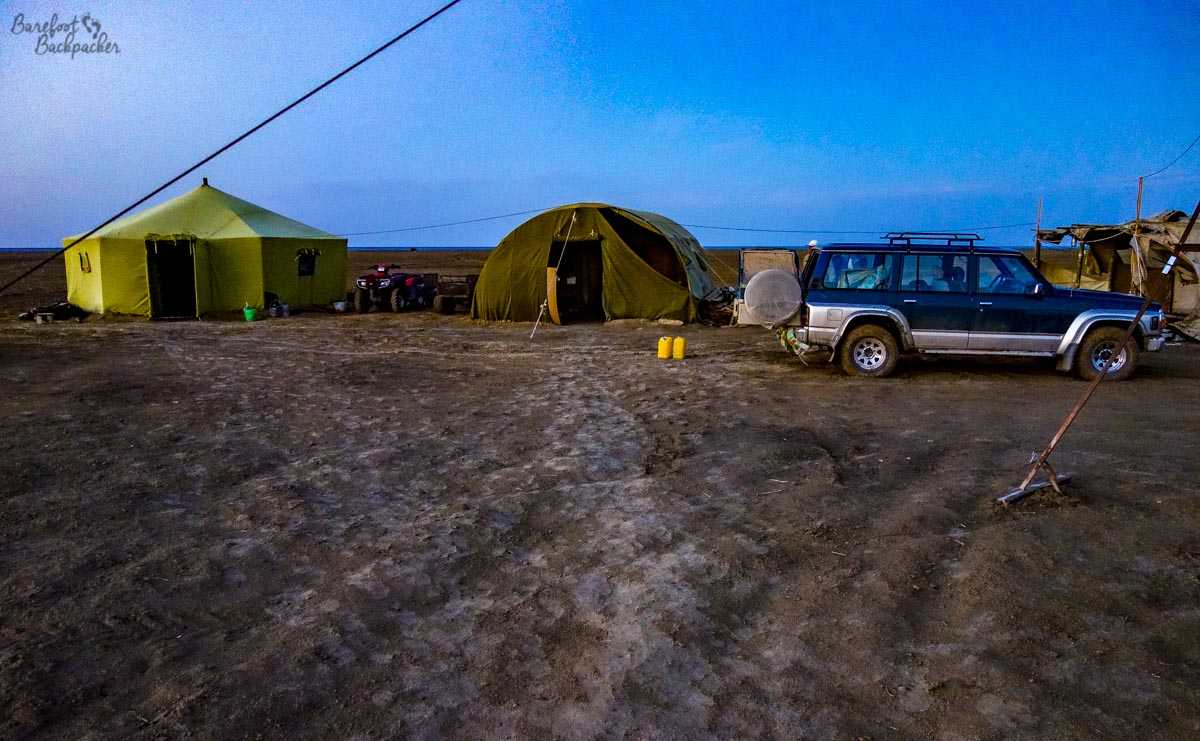 The yurts we stayed in near the seafront. Brighton beach huts they aren’t!

Apart from the other occasional clump of yurts, housing … local thrill-seekers driving buggies across the sand? Other backpackers? Fisherman? … we are alone. The journey to get to the sea shore took around four hours, across a flat landscape devoid of anything bar small shrubs and gas wells, though the closer we got to the shoreline even these petered out to leave nothing but a bleak and empty plain. This is the old sea bed, now completely dry as the shore has crept inexorably further inland, turning once wet/fertile land into dry, harsh, desert. Dust storms occasionally pass by, reducing visibility to zero and causing everyone to choke on the combination of dust and chemicals kicked up by the wind.

We also drove along the old cliff edge – now a ridge of rock sticking up from the sandy ground, a weird mountain range stark against the old sea-bed. There was no real trail here, merely a series of rutted paths through the wild and desolate hills, created by the slow but regular visits by 4x4s, marking out new byways like Wild West pioneer caravans. 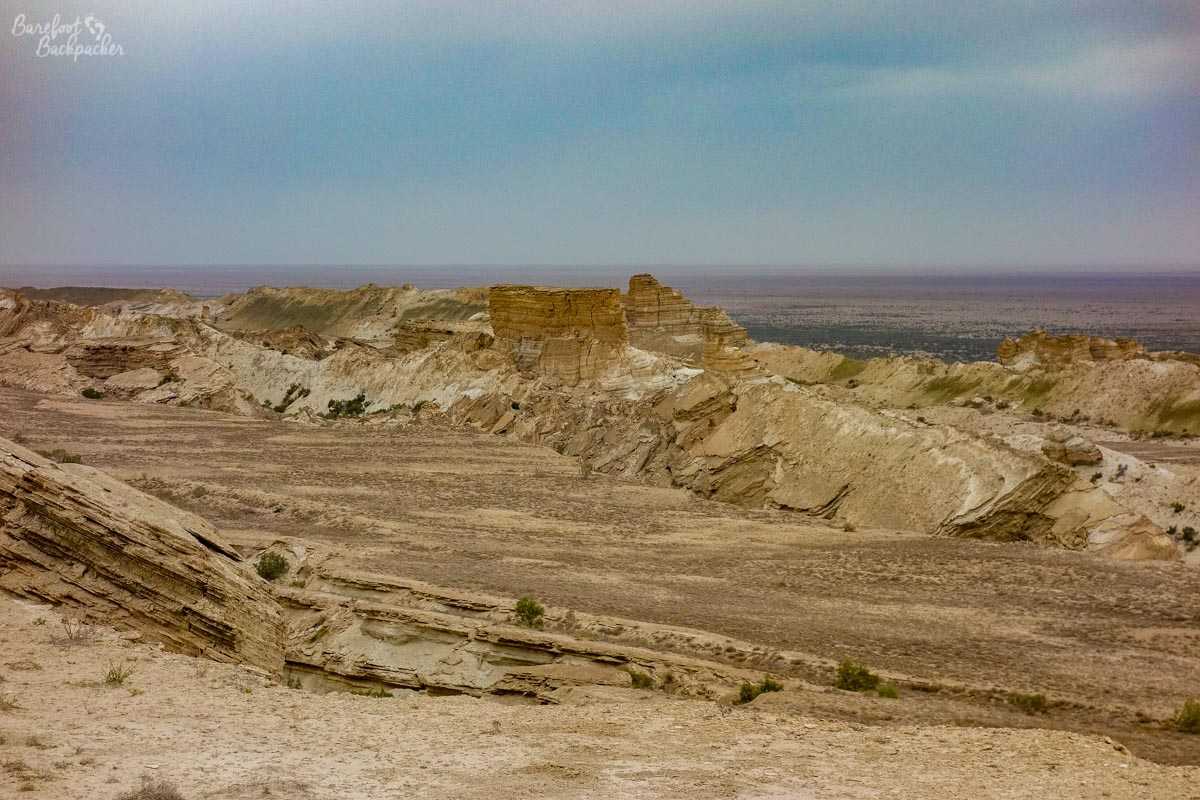 This is the Aral Sea, one of the finest examples in the world of how human intervention has a direct effect on the environment, and the problem of unintended consequences. What was once a fertile, if remote, littoral part of Central Asia has become a dry, polluted, desert wasteland.

It was not always thus; within living memory the Amu Darya delta area was the thriving centre of (of all things) a lucrative fish canning industry. However, the ‘needs’ of the Soviet 5-Year Plans meant areas further upstream became extensively irrigated to produce non-native cotton; this reduced the flow of the Amu Darya and Syr Darya rivers to a mere trickle; these two rivers were the main feeders to the Aral Sea, so without their flow, the sea shrank and died.

The Amu Darya, at Nukus, Uzkebistan. This all used to be underwater. 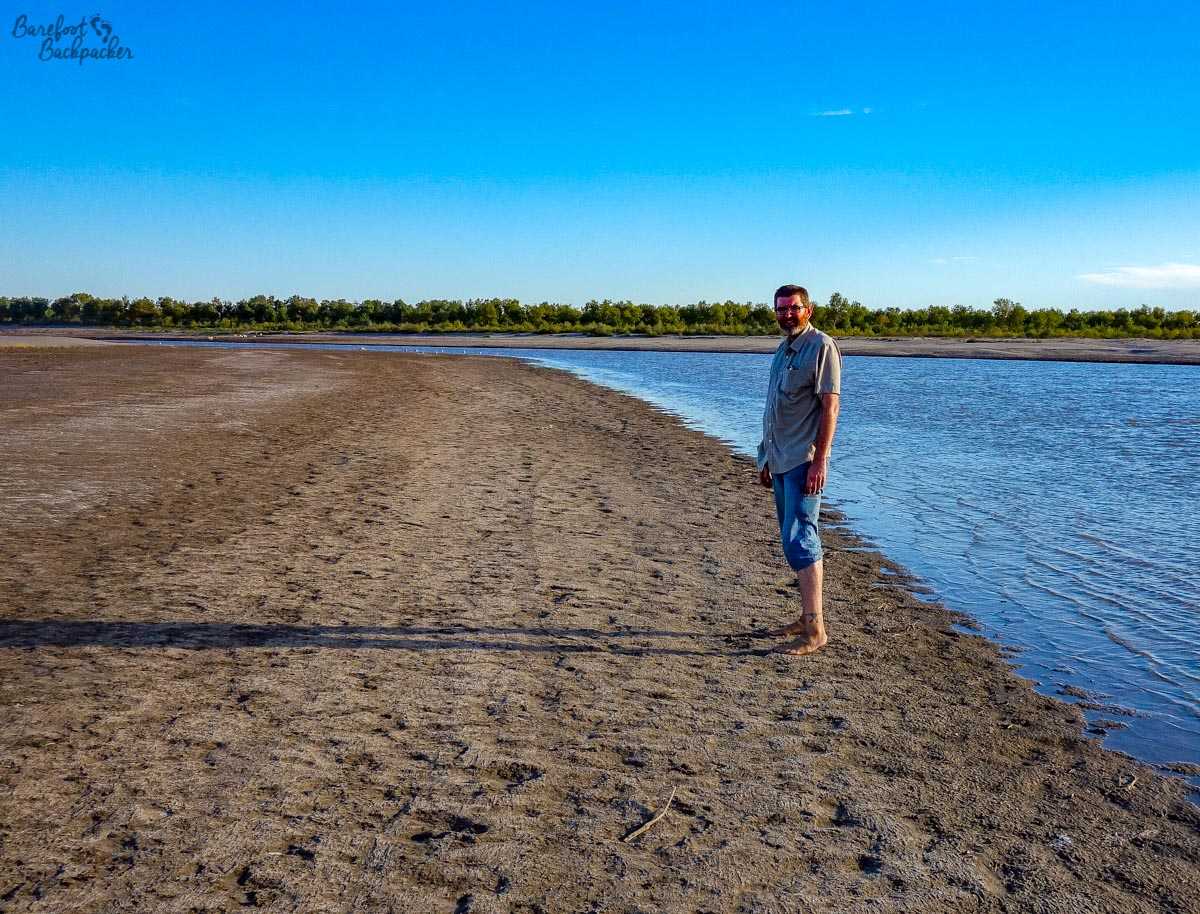 What’s left of the Amu Darya River, at Nukus. Much narrower than it was, and shallow.

This led to a number of ill effects: the towns along the rivers lost their industries as there was little or no water left, so people left in droves. With less water around to moisten the local atmosphere, the climate changed to a much more arid one with hotter and drier summers. And the extent to which Soviet-era factories were polluting became apparent, as all the waste previously dumped into the Aral Sea reappeared as the waters receded; the wind being then able to carry them around and devastate the wider area. This pollution is largely chemical and very toxic, still further killing the local environment. The Uzbek government doesn’t seem to be doing much to alleviate these issues, preferring instead to concentrate resources on places with more economic and political clout, like the Fergana Valley in the far East of Uzbekistan.

The main town, Moynaq, is small and quite linear, predominantly monotone, and very dusty. Along the main road are all the ‘amenities’ – a small stadium, a town hall, a museum, a couple of schools, there may or may not be a hotel in town (one allegedly exists, but it might be closed – I didn’t notice it), and the only café/chaikana I saw also looked very closed when I walked past it. A couple of local corner shops down the side roads serve the residential population but aside from that it’s a dead-end town in the middle of nowhere, somewhere you really have to want to go. Even getting this far required a 2-hour taxi from Nukus, the capital of this region of Karakalpakstan, which itself has a ‘frontier’ feel . The nearest major town on the Uzbekistan tourist trail is Urgench (for Khiva), some four hours’ drive away across empty plains. The majority of people living here seem to be either very young or very old, and women appear to outnumber men – it feels as though everyone who can leave has already left, and the town is waiting to die. 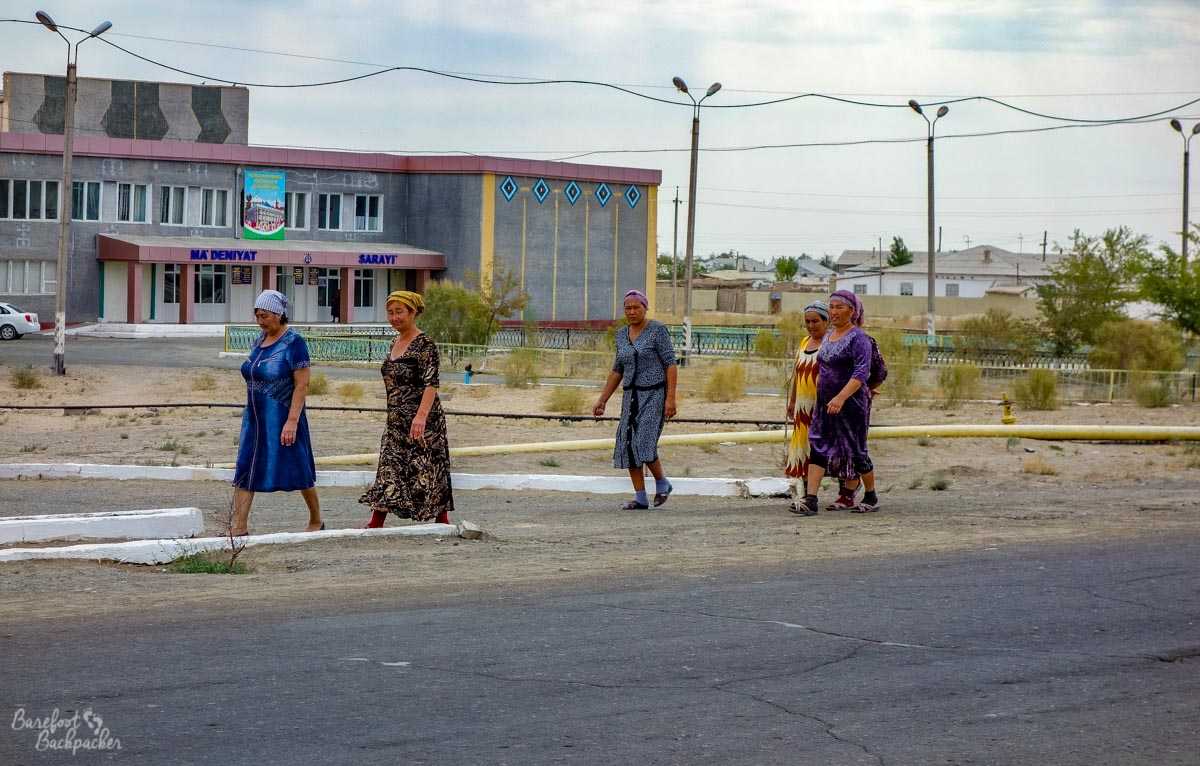 Local women walking down the main street in Moynaq.

It’s the harbour that’s the most striking representation of what happened here. The road ends at the top of a cliff, with stairs leading down to the old shoreline. Just beyond what used to be the waterline are the rusting hulks of old fishing vessels; some in situ where they became beached, whilst others have been moved here from further out in the sea where they’d been originally abandoned. 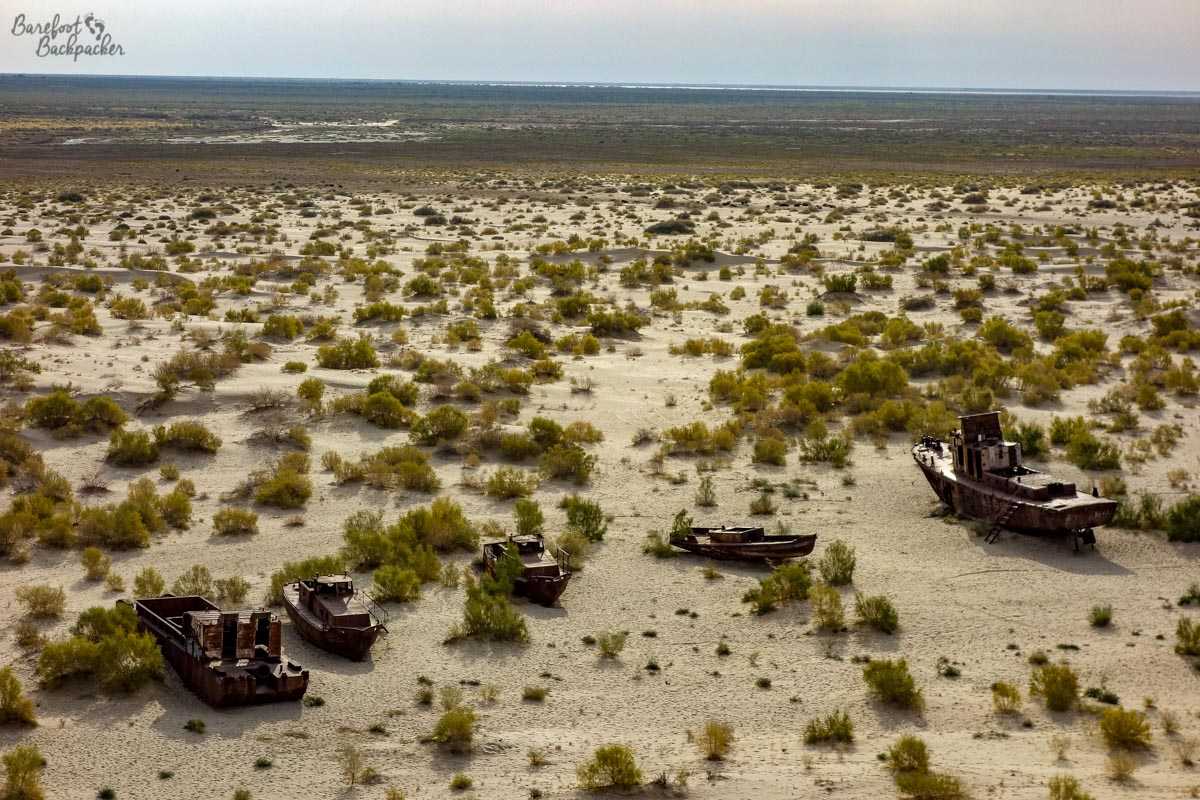 View of what remains of ships rusting in what used to be Moynaq’s harbour.

None of the ships are seaworthy any more – bits of them have been ‘recycled’ by the locals, other bits have fallen off and simply rotted or rusted away. Most of them are covered with graffiti; it would be nice to think people had written heartfelt messages deploring what happened here and expressing sorrow that humanity could change the environment like this, but to be honest most of it was of the ‘Ahmad was here’ and ‘Leila loves Sergei’ variety. 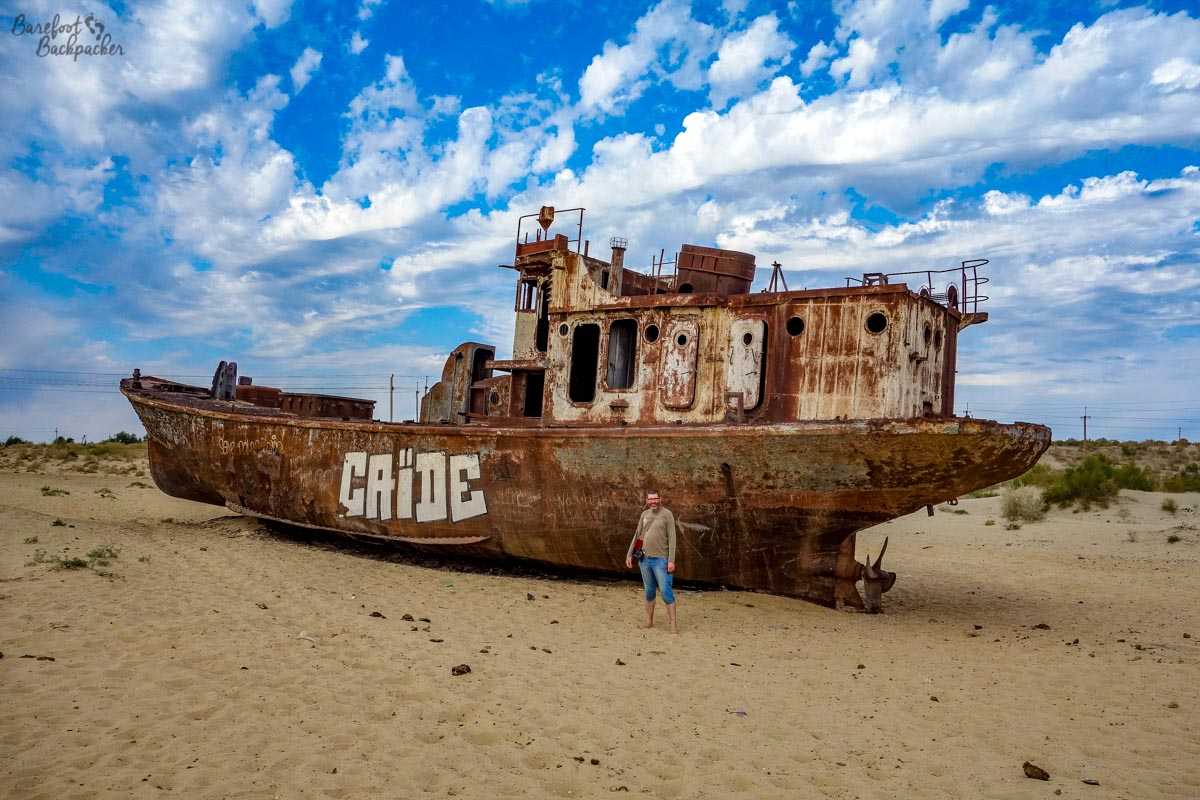 Close-up view of one of the rusting ships in Moynaq’s harbour; backpacker for illustrative purposes only…

There is some hope – the wells on the old sea bed are finding viable amounts of natural gas (although the substitution of one type of polluting industry for another isn’t exactly ideal), and environmental work elsewhere along the former coast has seen parts of the sea stabilise and even slightly recover – but certainly for the foreseeable future the only people passing through here are long-distance lorry drivers ploughing the route to/from Western Kazakhstan, and really eccentric backpackers coming to see the darker side of recent human history. Some locals have picked up on this ‘niche’ tourist trade by offering ‘homestays’ to backpackers, and then arranging private trips out to the Aral Sea shoreline. This is all ‘unofficial’; the Uzbek government tries to be very strict on monitoring tourist activity, but this far West even the tourist police are rarely seen; Karakalpakstan still feels like a world apart, one that the Uzbek government seem prepared to ignore.

Overview of what used to be Moynaq harbour and the Aral Sea, Uzbekistan. Note the rusting ships on the sand – some were here originally, others have been moved here from elsewhere in the sea. 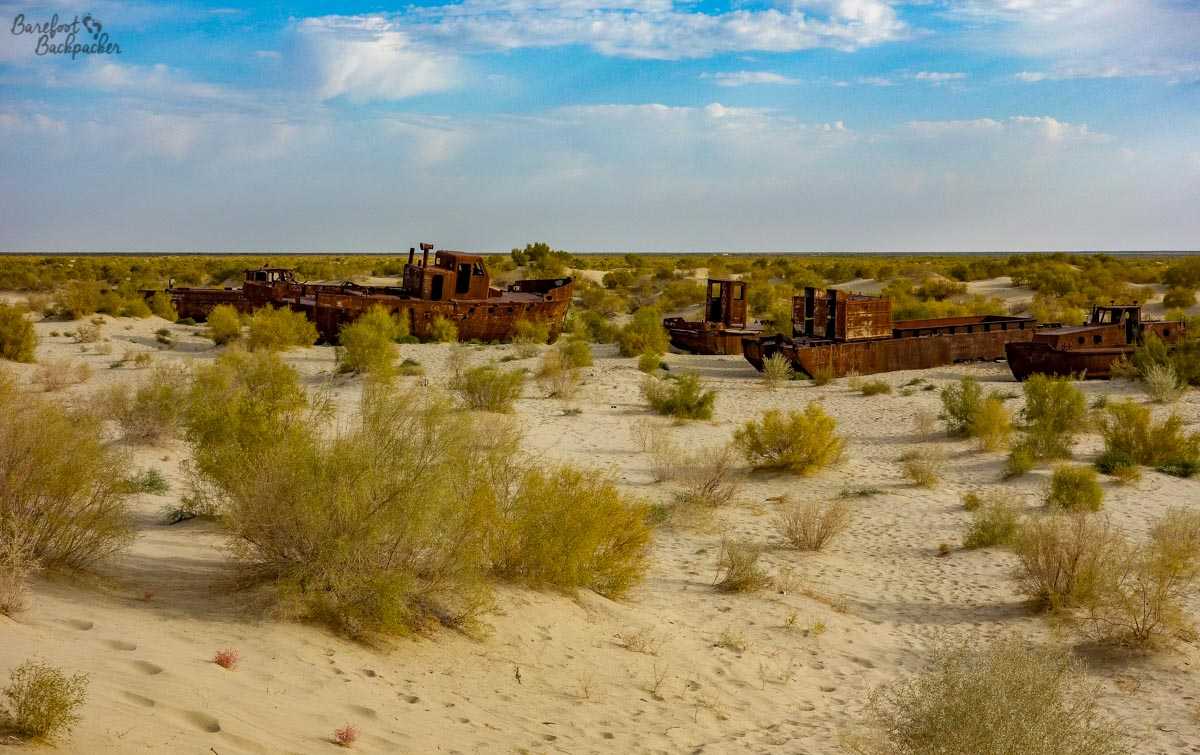 Rusting hulks in Moynaq harbour, in the sand surrounded by shrubs. 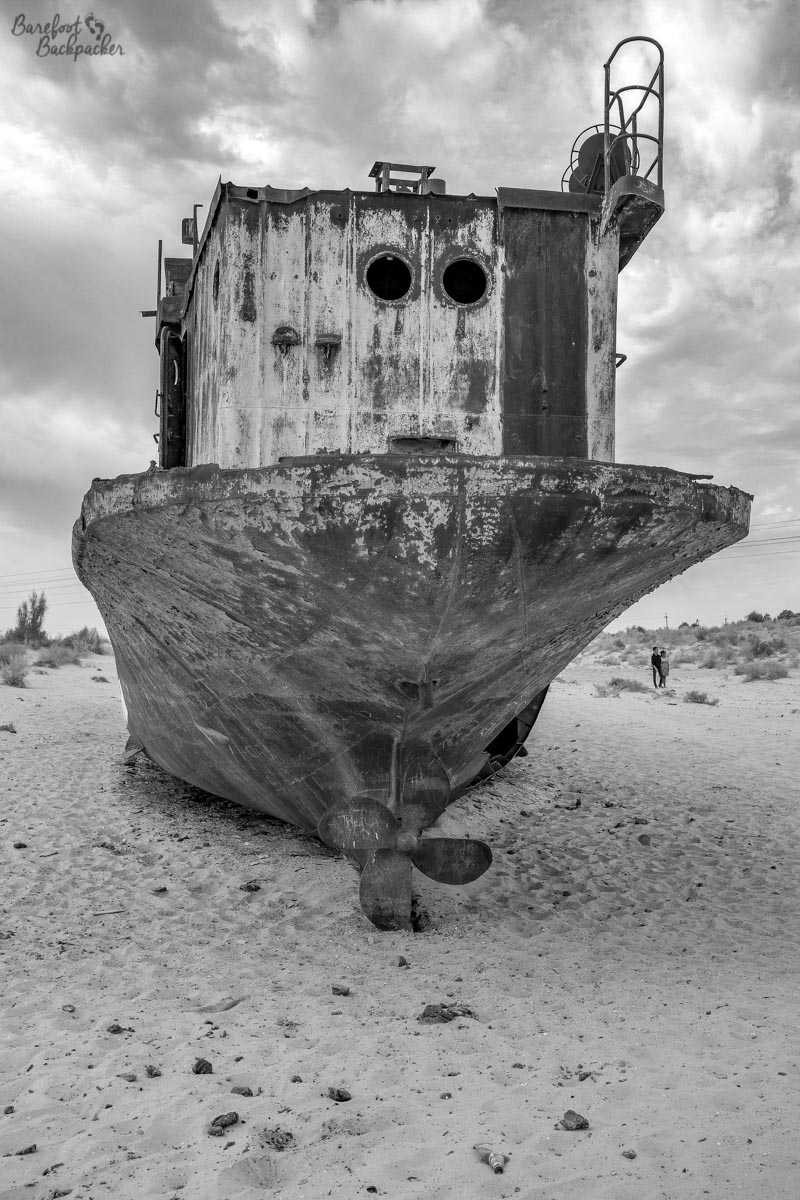 Some parts of these ships have been salvaged by locals, but much of them are just rusting away. 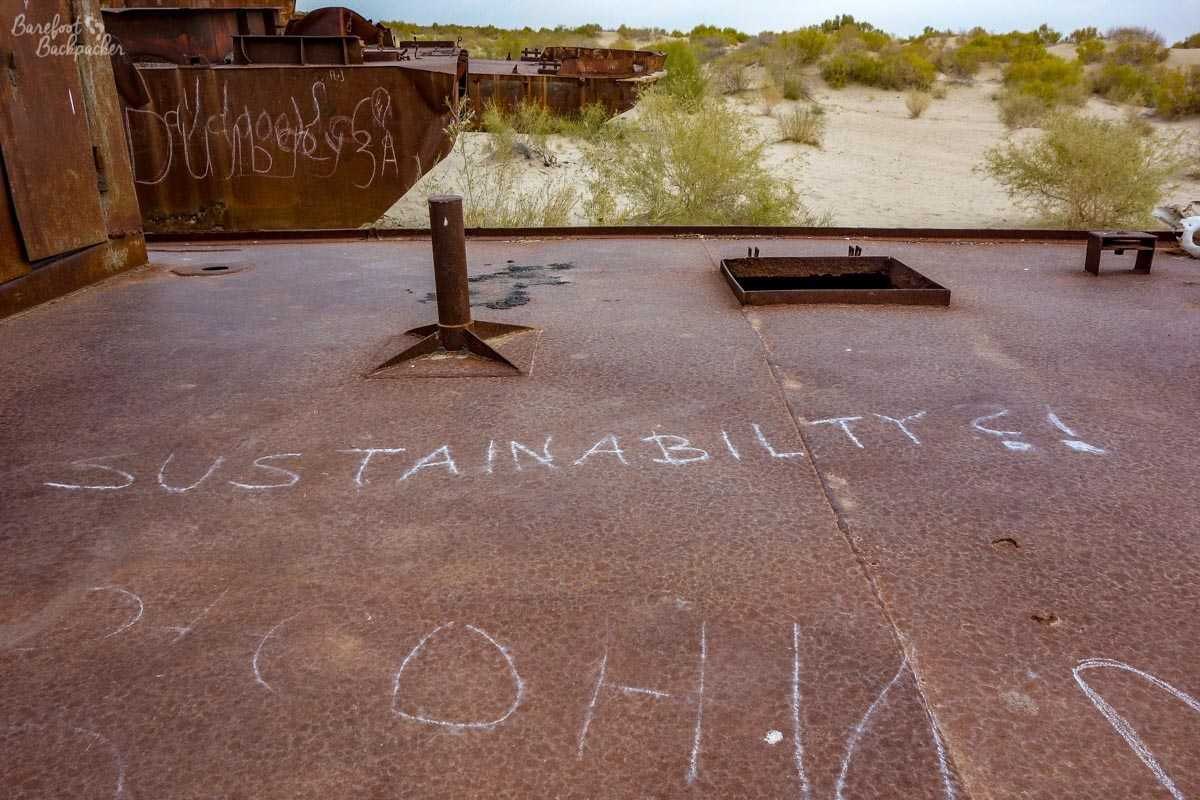 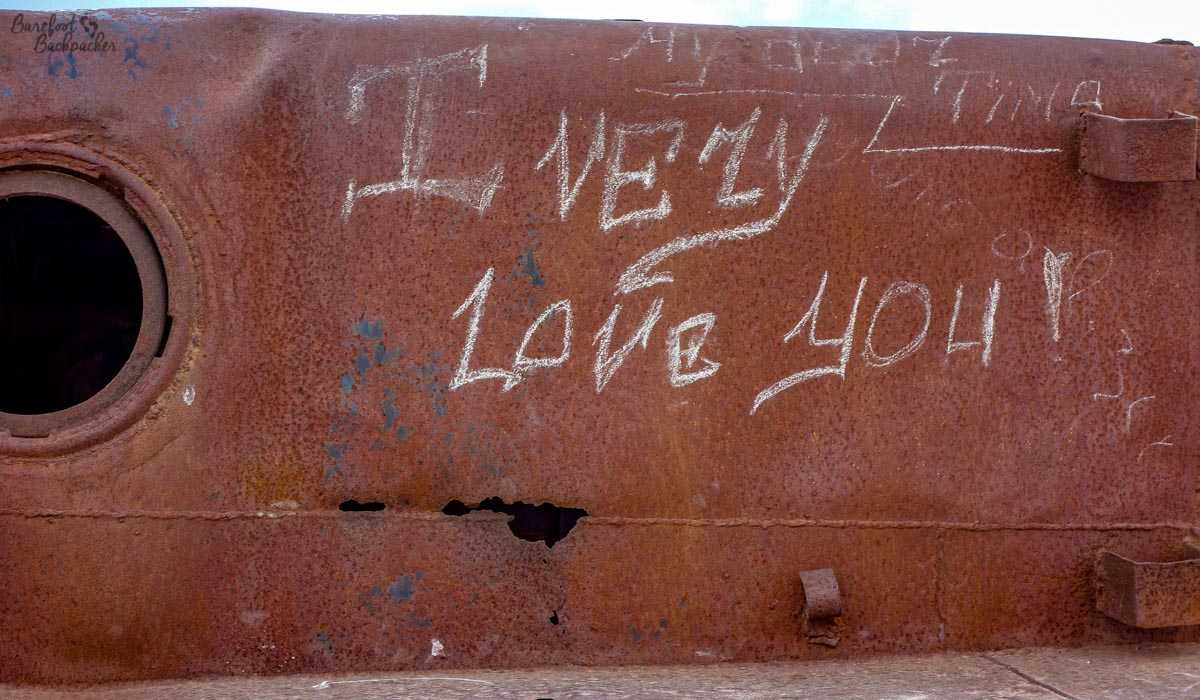 Graffiti on a couple of the ships; note the variety and contrast. 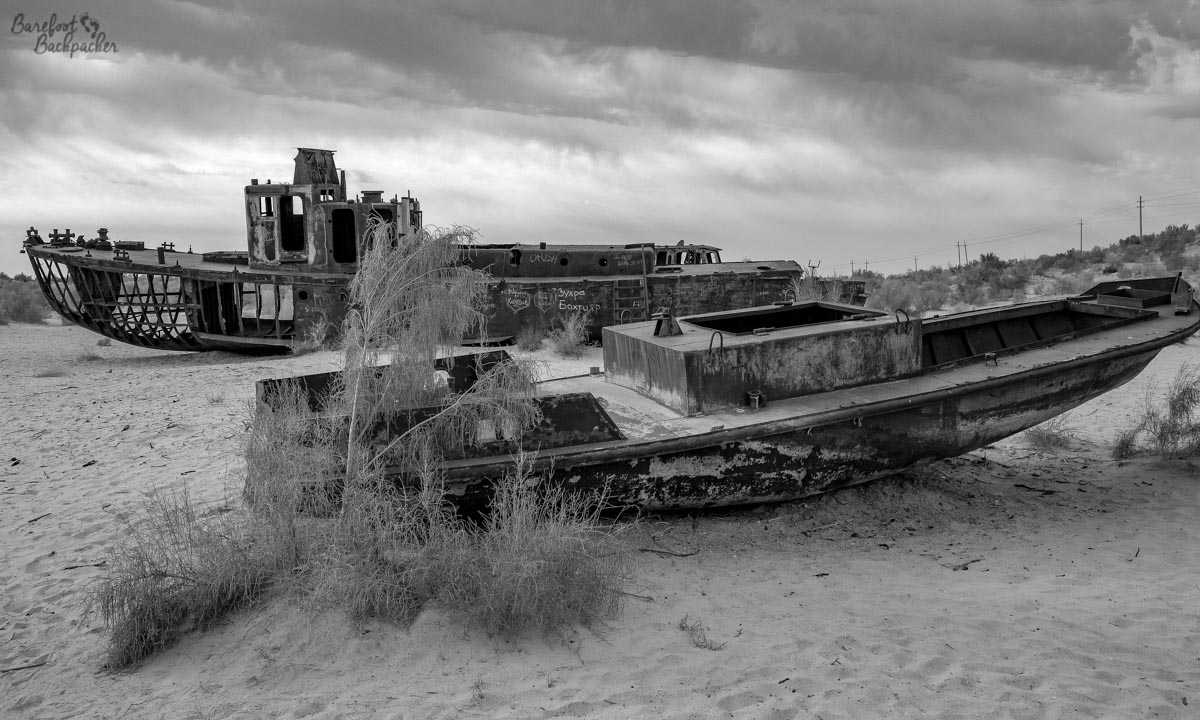 You can see they used to be ships, but there’s pretty much no hope for them now. Poignant reminder of what used to be. 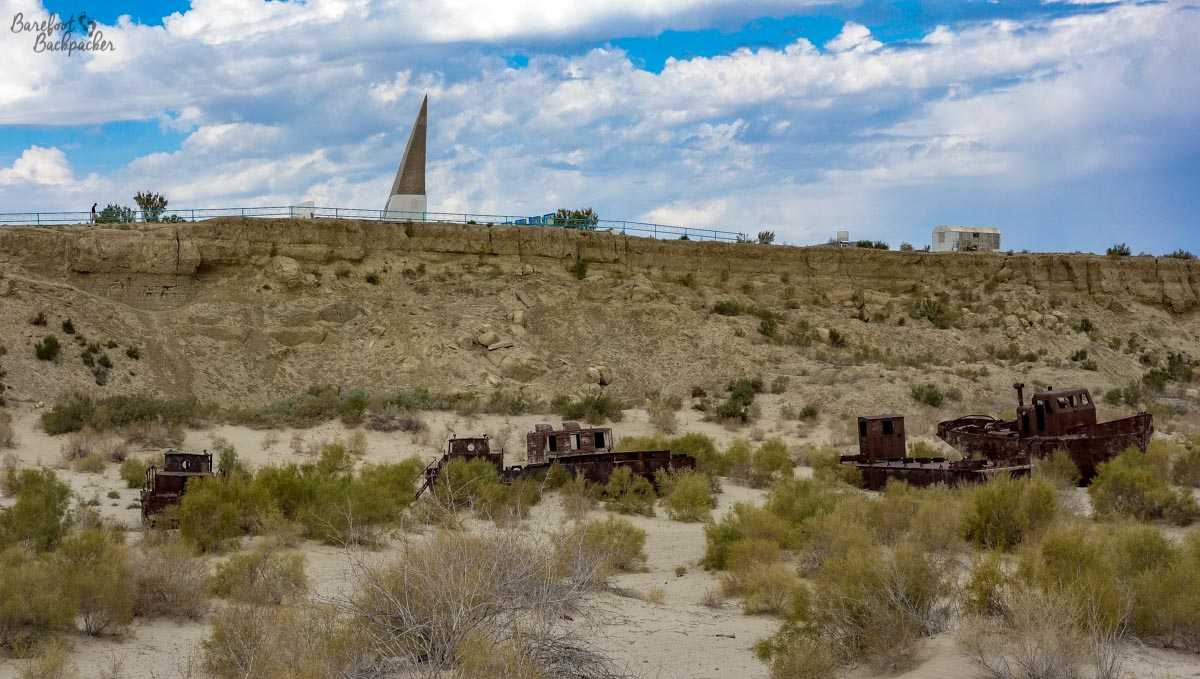 View of the ships looking back towards “dry land”. The spire is part of the ‘memorial’ to the Aral Sea 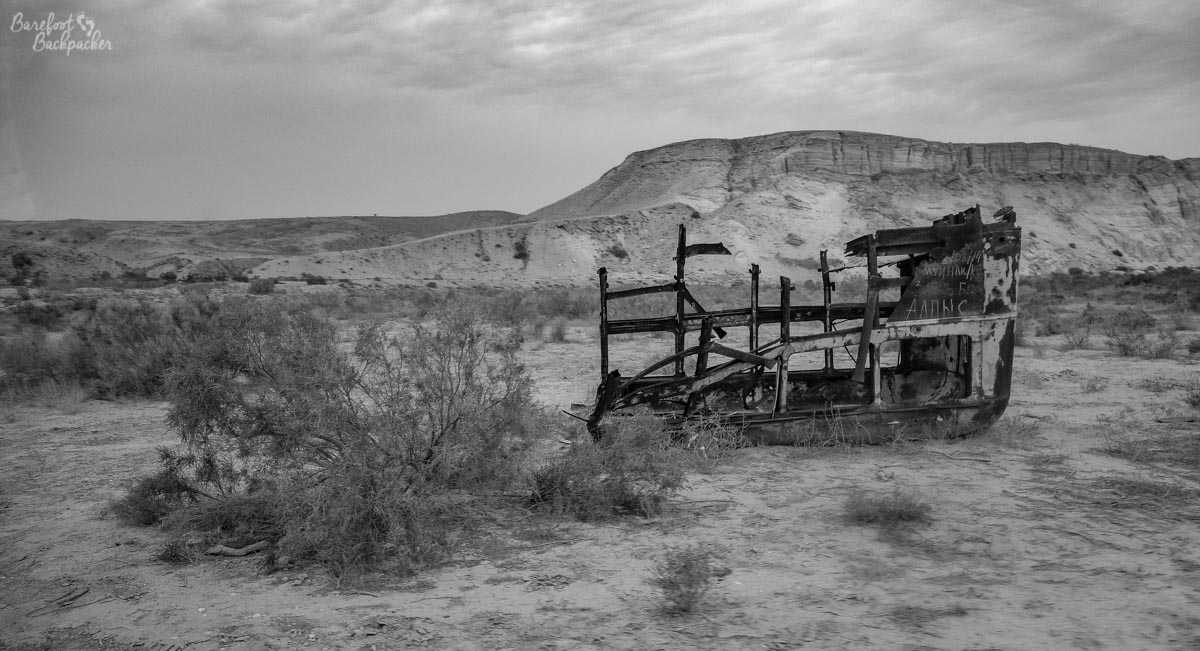 The ruined vehicles aren’t just limited to Moynaq harbour – this dead van/bus was seen on the old sea bed on the way to the Aral Sea shoreline. 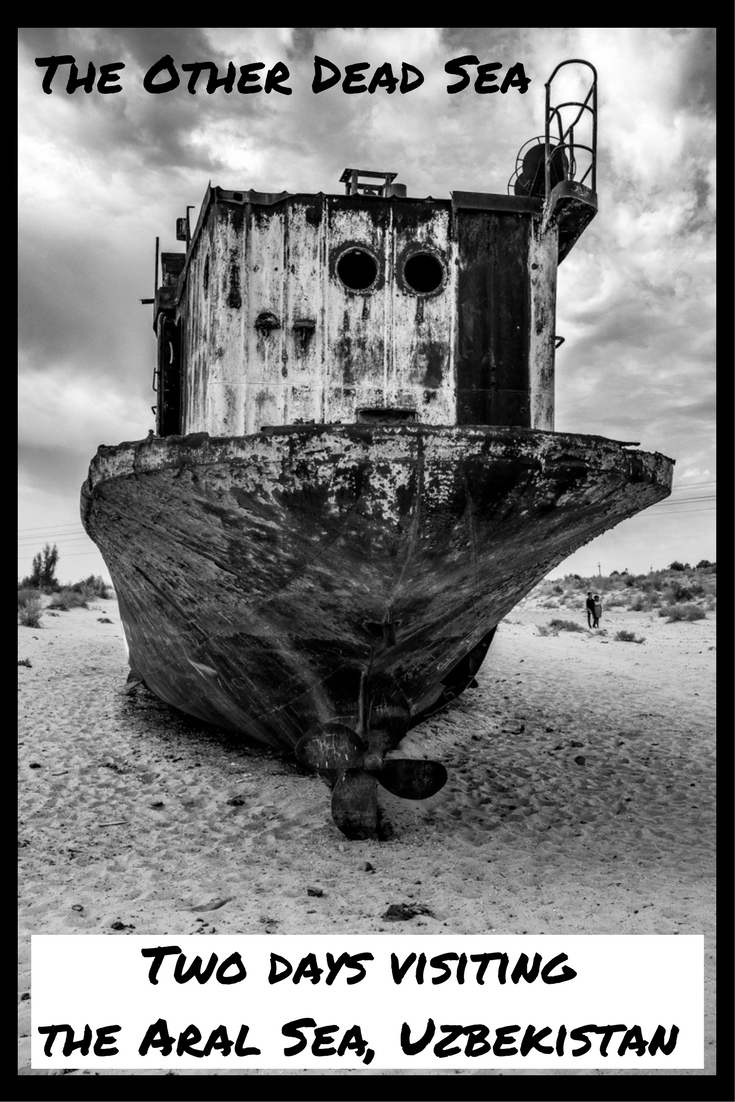 (Aral Sea and Moynaq visited 16-18 September 2014, along with fellow traveller Marta Rajková, who also arranged the trip, so many thanks to her!)

2 thoughts on “The Other Dead Sea”