When you look on a map, the Outer Hebrides look pretty remote and uninteresting, and you might wonder what they look like. You may get the impression they’re just narrow strips of rock, weather-beaten and barren. But there’s a lot of very different landscape in their 210km length, and make the islands worth visiting for that alone.

There is an urban legend that the Thailand tourist board, in their literature advertising the beaches along the Thai coast (Kae Tae, apparently), accidentally used a picture of one of the beaches on Berneray, and no-one involved noticed. 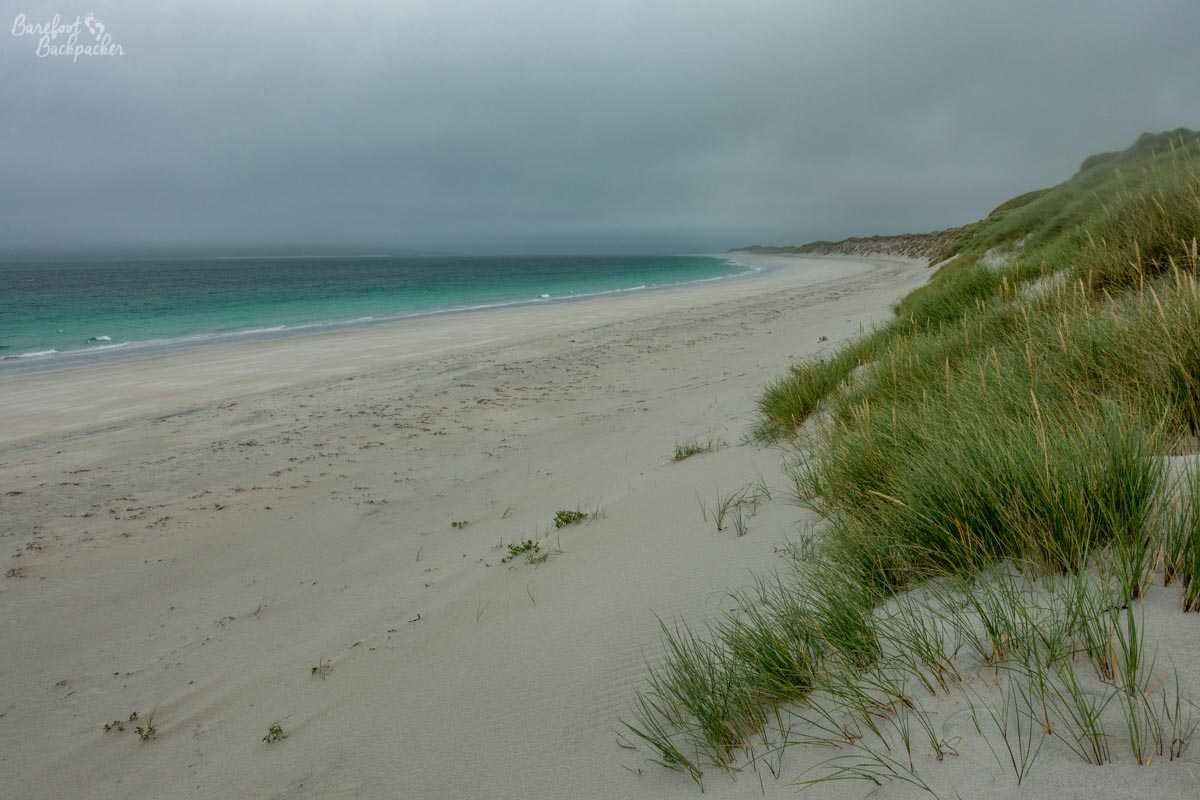 Kae Tae Beach, Thail….oh wait, no, it’s the west beach on the island of Berneray. Easy mistake to make

Berneray is a small island lying between North Uist and Harris, and is the end of the main spine road up the islands – you need to catch a ferry from here to Harris to continue your voyage. It’s a small island and could be divided into three sections – the road and village on the east, farms in the centre, and beach on the west and to an extent the north. The farmland is quite dull, in all honesty, and merely serves to separate (by just over a mile) the bulk of the people from the stunning expanse of sand and dunes.

This means, although one of the main draws of the island, the beaches are fairly lightly trodden, which of course makes them all the more appealing. Except on the day I went, when I was virtually the only person there because of torrential rain and strong winds. Summer, eh? 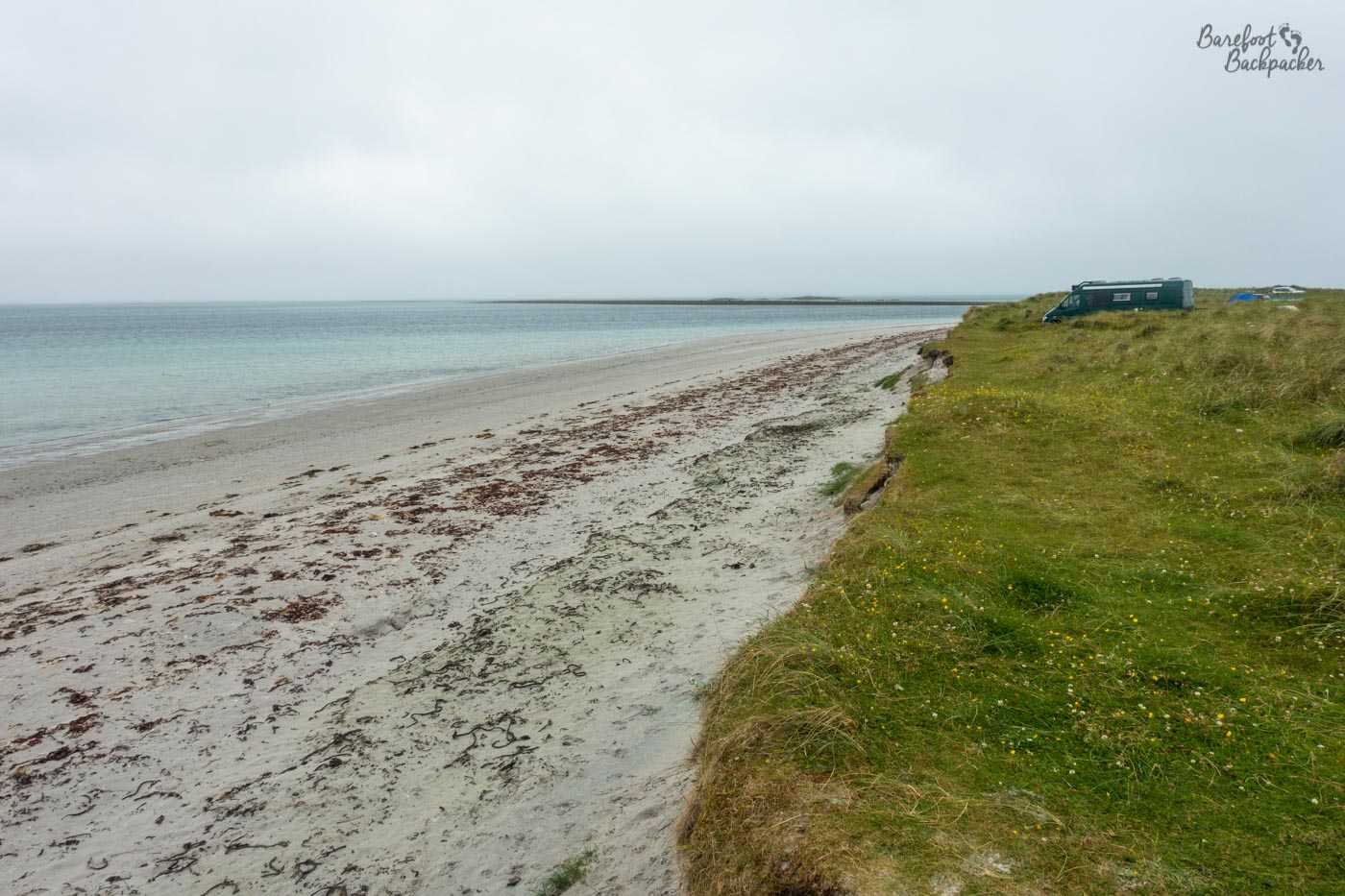 Berneray’s north beach. For such a small island, Berneray has two big beaches

Many of the islands have similar beaches, mostly on the western coast – even dour Benbecula has a couple of small ones tucked away by bends in the roads – and a couple on Harris are of exceptional quality (one even has a registered campsite nearby, just be careful of the wind), but the other island noted specifically for beaches is South Uist. 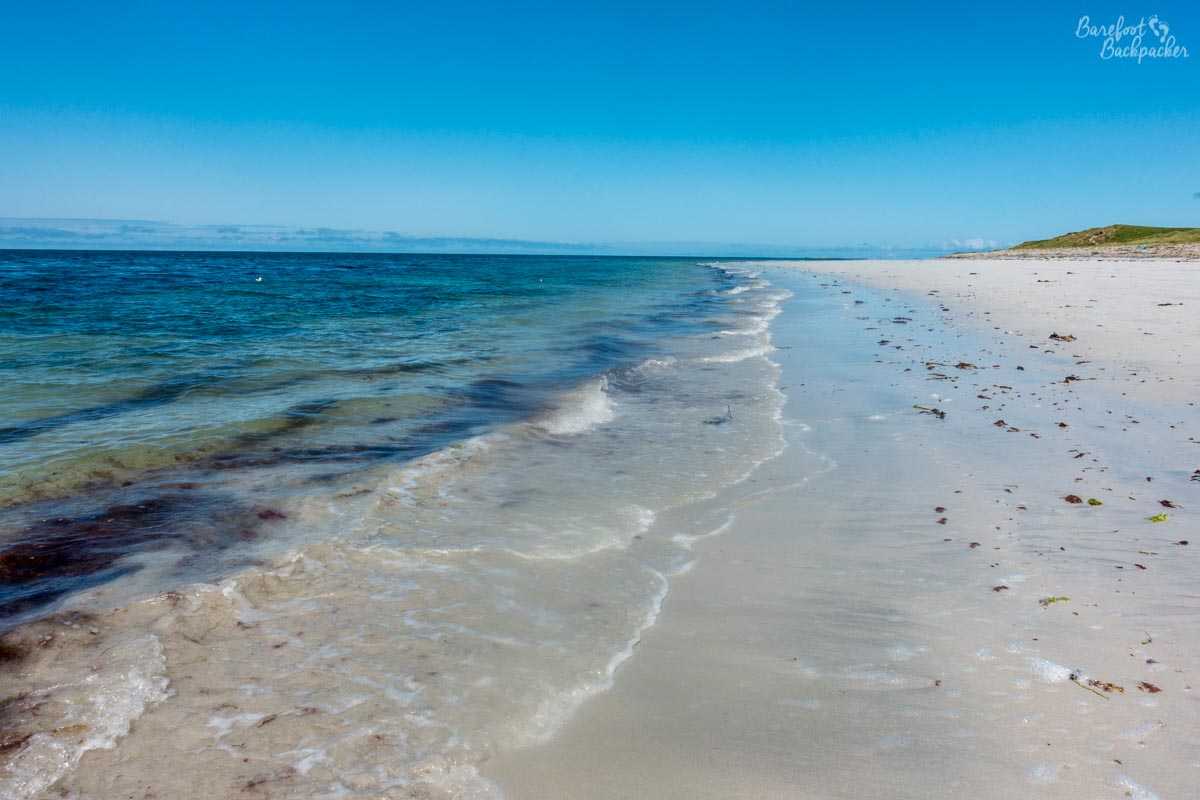 Part of the beach along the western shores of South Uist

South Uist is the second largest of the Outer Hebrides, and runs around 22 miles from North to South – it’s the one some people think looks a bit like Chile. The main Hebridean spine road runs through the centre of the island and it seems like many people simply travel up it in their camper vans or on their bikes (both of which are legion here. A small legion, like one that had been on the wrong end of a barbarian invasion, but a legion nevertheless) and don’t venture off piste. This is a bit of a shame, as running pretty much the entire length of its West Coast is a wide, sandy, beach, separated from the rest of the island by a chain of sand dunes. Getting access to the beach is pretty simple – find a road or track running west from the main road and eventually it should reach the sea. 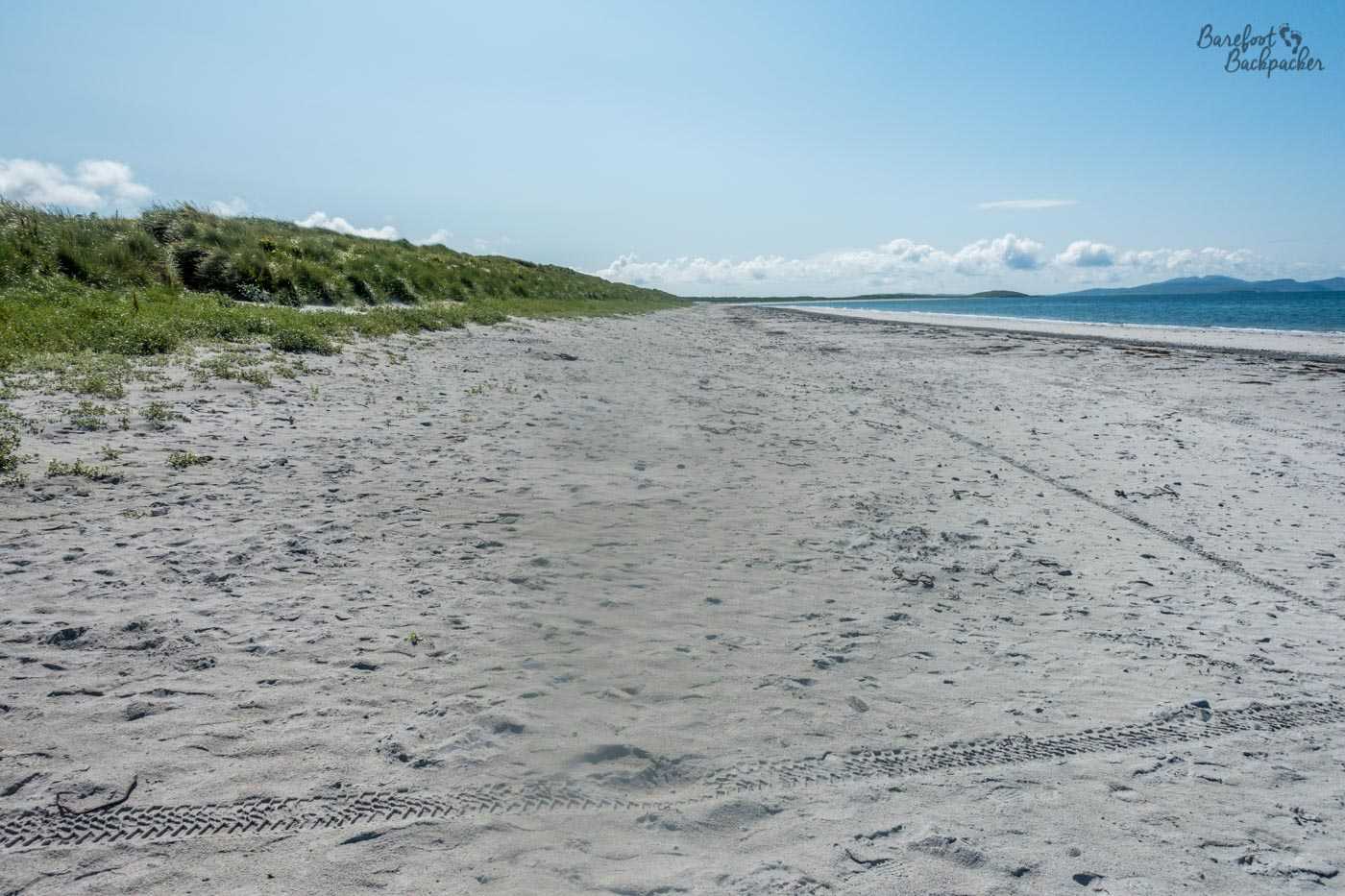 Inconveniently, my camera got a smudge that I didn’t notice for the rest of the day so most of my pictures are of poor quality. Gives me an excuse to go back I guess!

Its location and sheer length means you can always find somewhere on it that’s pretty much deserted – indeed I strolled along it for an hour and didn’t see another soul (or sole – it’s very much a chilled barefoot sort of place) – barring one distant helicopter. It’s very much a beach to live out any ‘castaway island’ fantasies – the water is a pale blue and the sand is soft, bright, yellow, and fairly pristine – the combination and the lack of people makes it feel like you’ve found your own tropical desert island. Just without the palm trees. On that note, actually, I was recently told that the most northerly pine tree in the world is on Tiree, one of the islands in the Inner Hebrides but pretty much the next island south of the Outer Hebridean chain, so not far away. I have never been to Tiree so I don’t know how true that is.

The southern island of Vatersay though probably has the best beach vista. The island looks vaguely like an anvil, so in the middle, so to speak, there are two bays that almost meet. Both of these bays have curved beaches – it’s possible to stand on the ridge of grass between them and see them both. Although there’s a car park here, neither of them get particularly busy, unless you count the passing birds. Herons, apparently. It’s a great spot for both wildlife spotting – more about which later – and also it would be one of the few places where you can see both a decent sunrise and sunset without having to move. 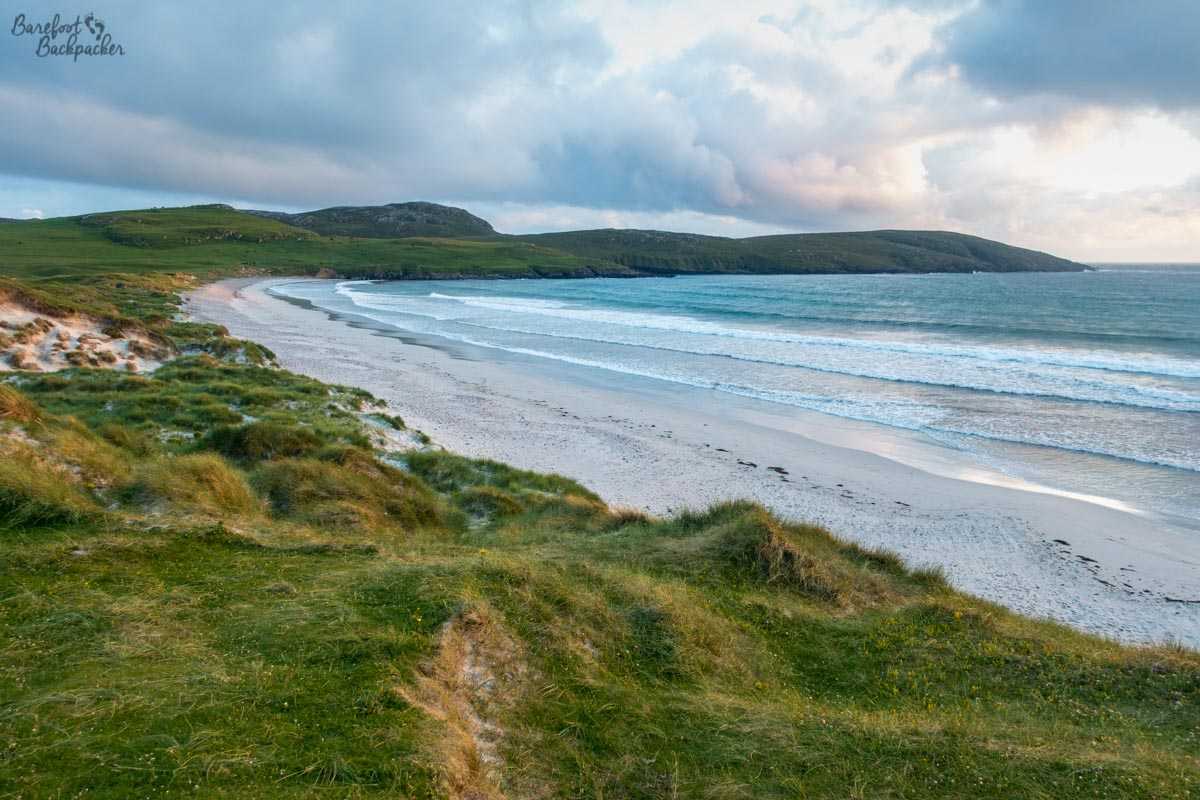 The westerly of the two beaches at the centre of Vatersay

Note about all these beaches though. This is the North Atlantic Ocean, so be aware of that before you go for a skinny dip. In saying that though the water is very clear and the sand is rather inviting, if a little soft.

Machair and the flood plains

As mentioned above, many of the beaches are separated from the rest of the land by sand dunes. But next to the dunes lies an environment unique to this part of Scotland as a whole – the machair. It’s a Gaelic word that Wikipedia tells me means ‘fertile plain’, but is used in a more general sense to describe the grasslands on the landward side of the dunes. They tend to be sandy soils (understandably), be relatively alkaline, and be suitable for a limited number of crops – mainly types of oats and barley. Conveniently. It’s also a great place for wildflowers to grow; consequently the fields by the dunes look like carpets of colour. 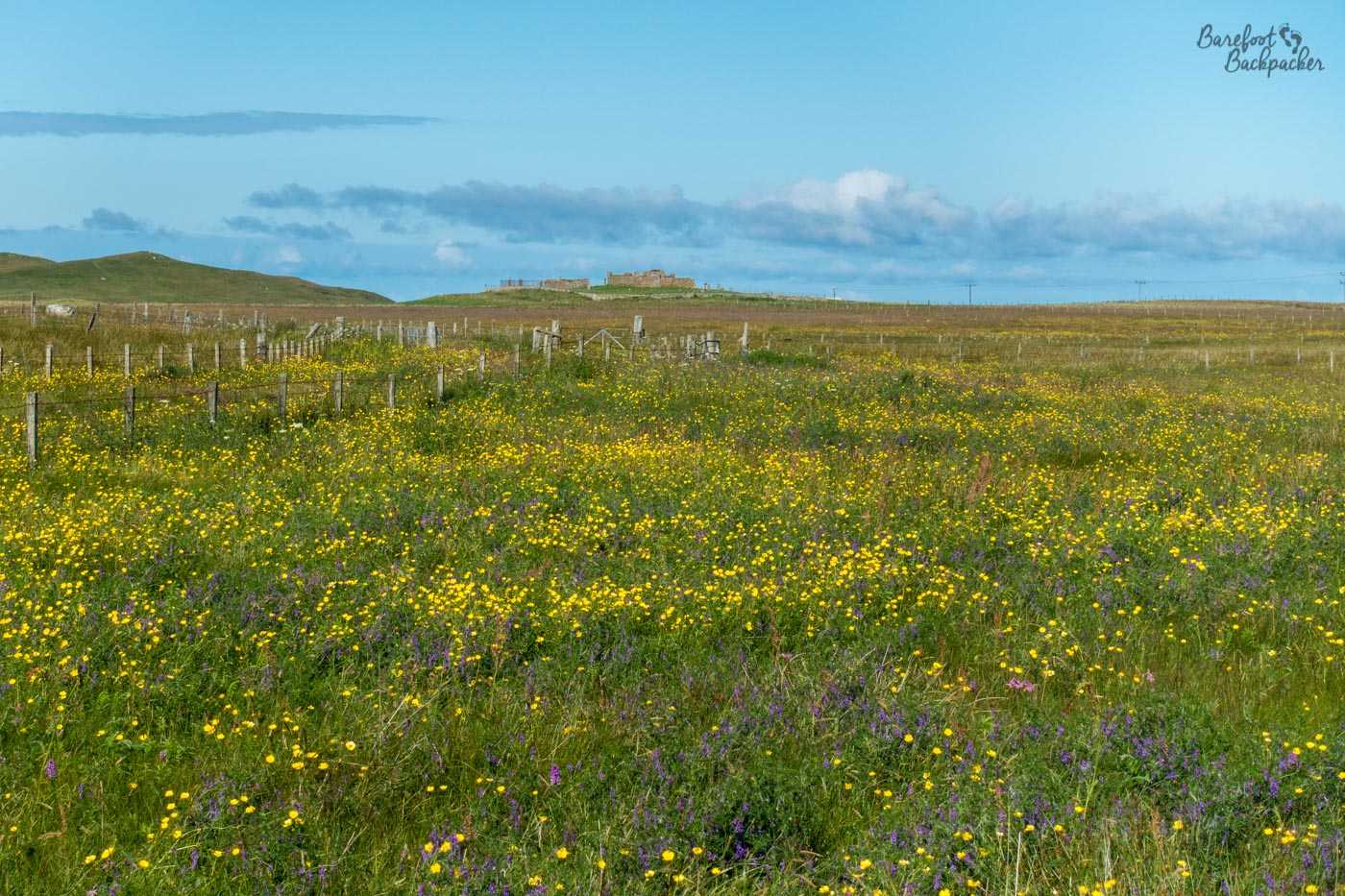 Wildflowers in the machair of South Uist

This Machair exists across most of the islands, but due to its sheer size, it’s most obvious on South Uist, where it provides a lovely setting to walk through if you’re fed up of sandy toes. And people have been doing just that for millennia – this is where Cladh Hallan is, after all.

The other side to Machair though is its low-lying nature and its propensity to flood. This is seen at the north end of South Uist, but more prominently across the whole of the island of North Uist, which is dominated by multitudes of small lochs of random shapes and sizes, making the whole area look like a flood plain. Indeed part of the spine road in these areas is built on a series of causeways straight across the jutting lochs, which make it tricky to know where the island genuinely ends. It really does feel like a flooded planet. 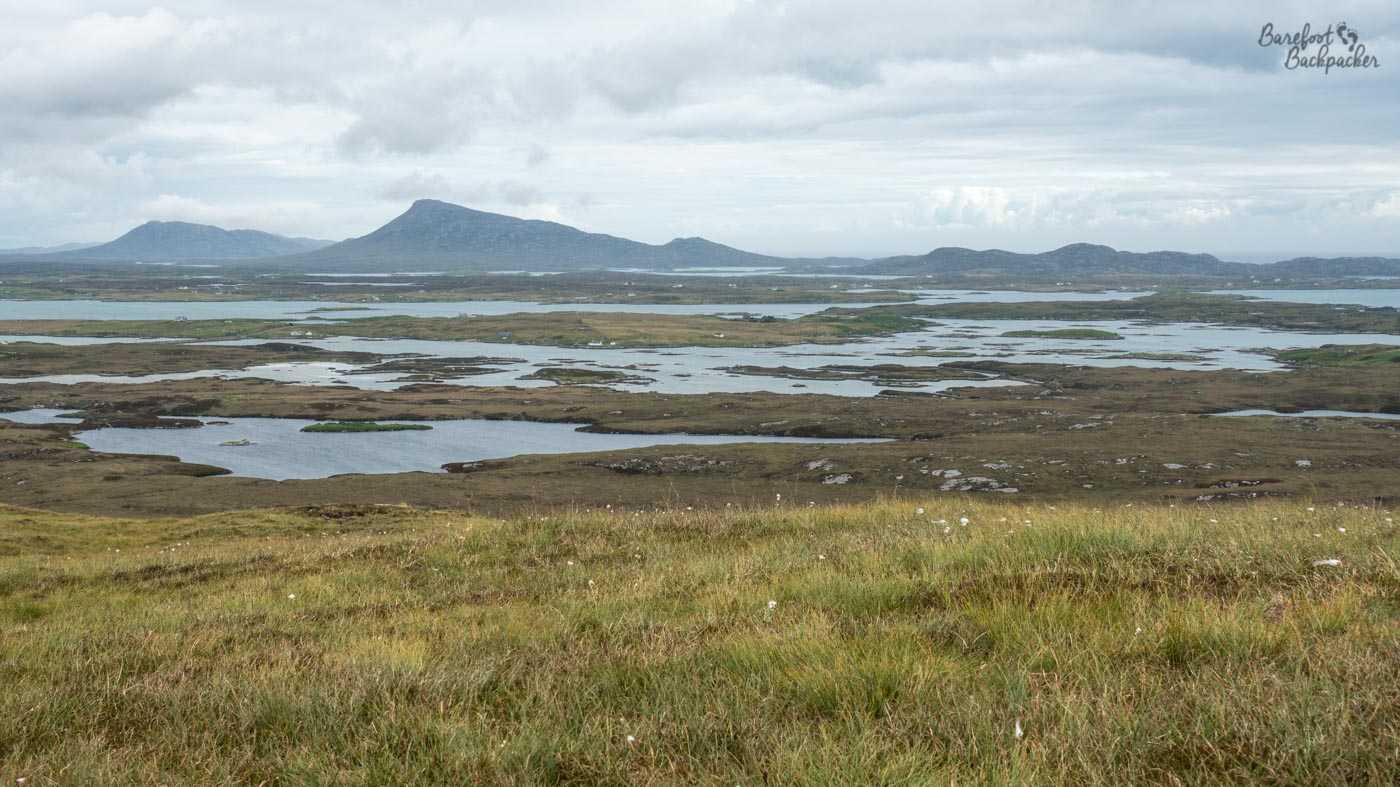 Floodplains; presumably these are between Benbecula and North Uist

But of course there are also hills

Obviously there are going to be rocky cliffs and mountains; as already stated, these are not flat Pacific atolls. The dual island of Harris/Lewis are the best bet for all your #GetOutside needs – the third largest island in the whole of the British/Celtic Isles group after the islands of Great Britain and Ireland, but it consists of maybe four of five main roads, and a lot of sheep. Most of it is mountainous, and relatively high – the highest point in the chain is Clisham at 799m. Reader, I did not climb it. 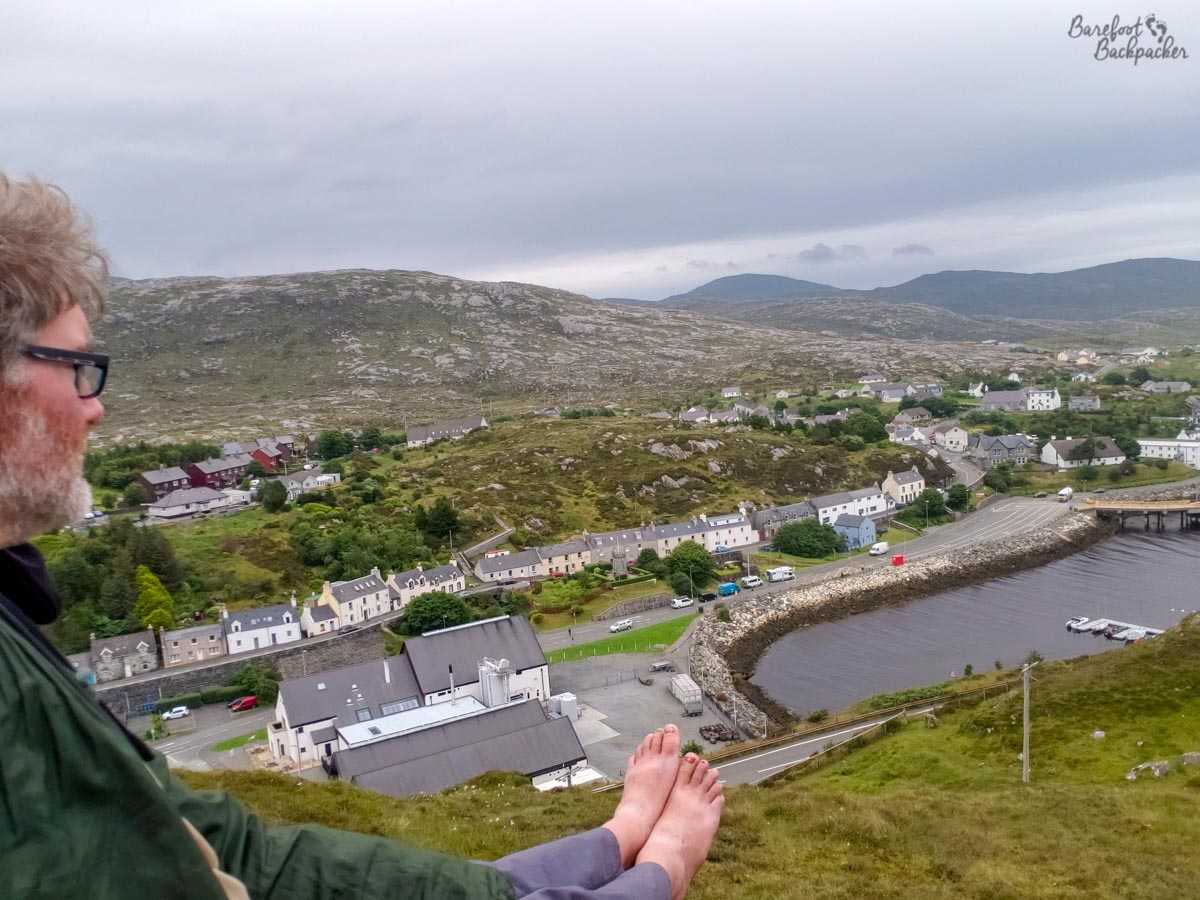 Sat on the hillside overlooking Tarbert, on Harris.

Harris/Lewis is also notable for the specific rock that makes up the bulk of the island. This is known as the Lewisian Gneiss (pronounced ‘nice’), and is amongst the oldest rock in the world, some of it around 3 billion years of age (the world itself is only 4.6bn years old). It’s a form of granite and is also amongst the hardest rock that exists. This makes some of the roads on the islands quite spectacular in terms of setting.

Road in Harris going through a landscape of Lewisian Gneiss

South Uist, too, is surprisingly mountainous; if you spend all your time on the beaches and machair in the west you might be forgiven for thinking it’s a flat, wet, grassland. In this case, unlike Harris/Lewis which is entirely mountainous, the high points on South Uist are all in the east, culminating in the 620m high Beinn Mhòr. Reader, I did not climb this one either.

So what did I climb? Surely I must have climbed at least one? Well, embarrassingly, given my previous adventures up the Pennine Way, the only island I knowingly reached the highest peak of was Benbecula. 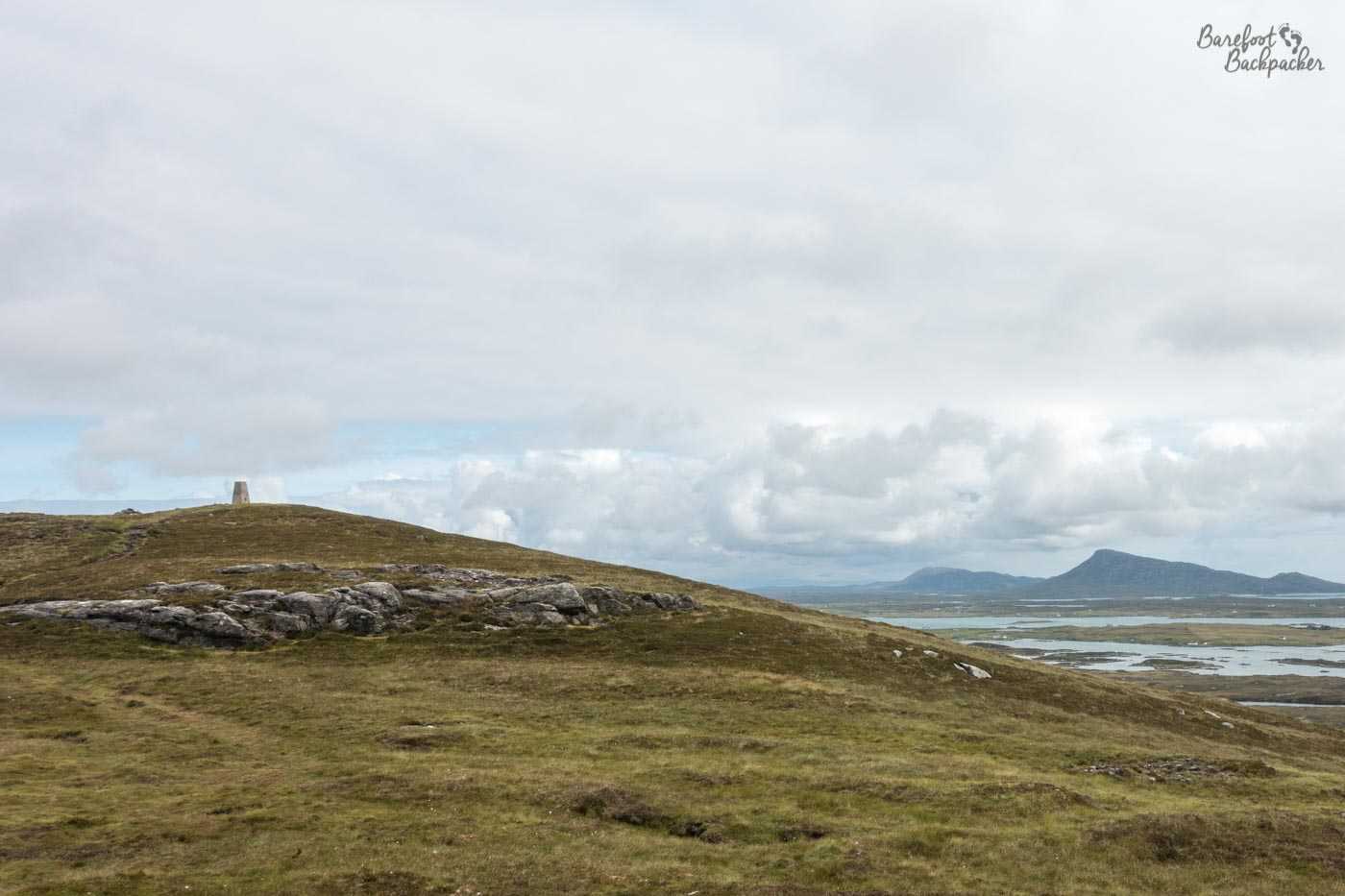 It’s not the most exciting island in the chain, and it’s quite low-lying, but it has the advantage of being both relatively small and very central. This means you can get a pretty good vista of the Outer Hebrides in general from its highest point – Ruabhal, at a massive 124m. It’s a pretty easy trail up, if a little boggy in places (it meant I climbed it barefoot – coming down I met a couple of people on the way up who wondered if this meant I was on a pilgrimage!); the only problem being it’s understandably a little windy at the top as its the only exposed place on the whole island. 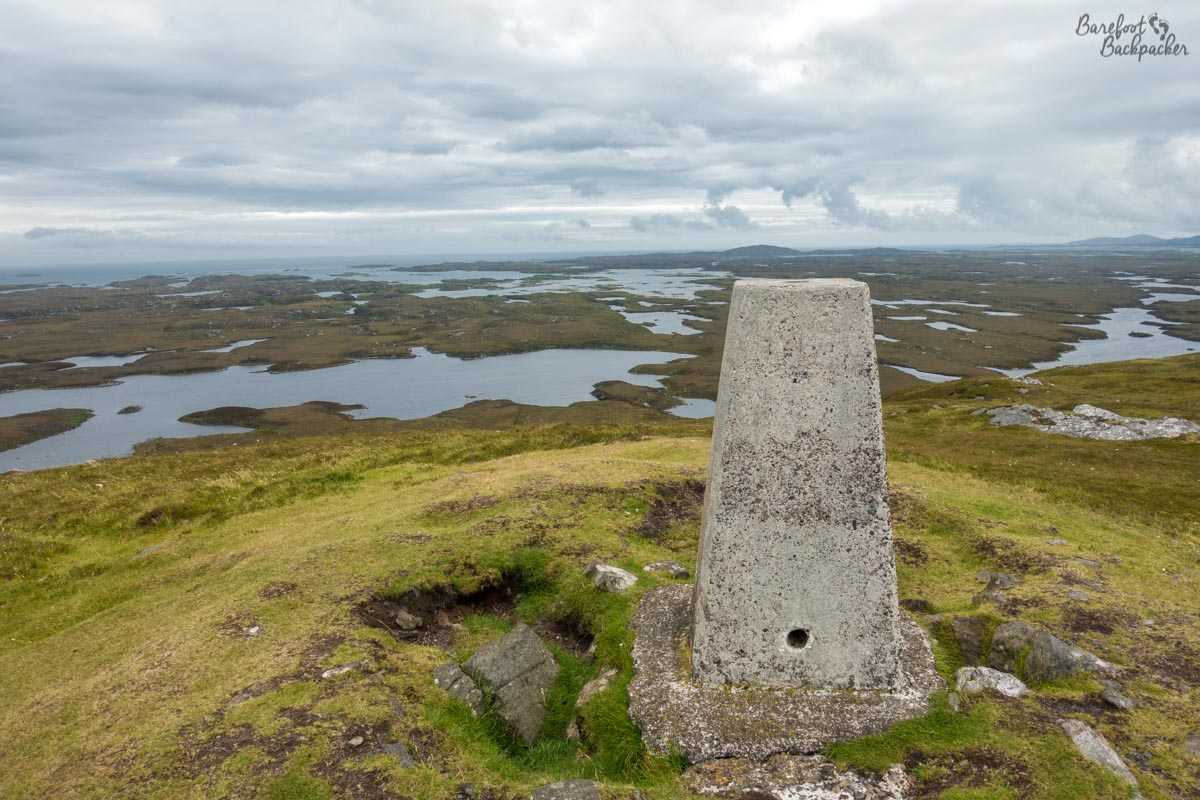 View from the summit of Ruabhal. Yes, more flood-plains. The same ones, in fact.

This is not my strongest subject, as anyone who’s ever travelled with me will know. Indeed my hiking companion Becky would regularly stop to take photos of different types of birds and say things like “I’ve always wanted to see a Golden Plover” and I’m like “… it’s a bird, it has wings, that’s all I can tell you”.

However, even I’ll concede the Outer Hebrides are a fabulous place for bird-watching. Obviously the best sights are way out in the Atlantic Ocean by the Saint Kilda group, but getting there is expensive and unreliable, but any of the islands are a good second call as they’re the first stopping point for both Atlantic and Arctic bound birds. Frequently-spottable birds in the area are (/me checks Wikipedia) corncrakes, gannets, kittiwakes, and guillemots, amongst others. 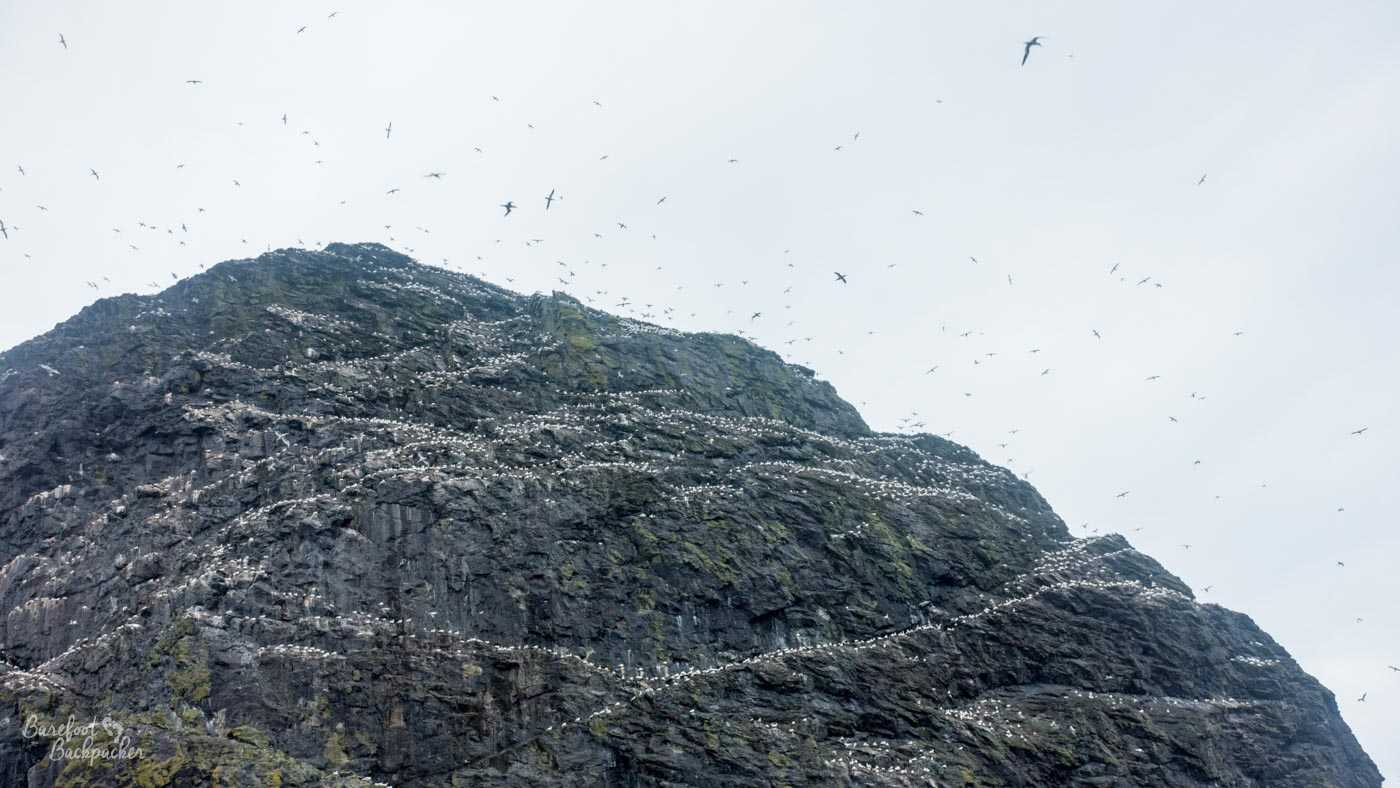 Birds flying around one of the rock stacks of St Kilda. The picture doesn’t really do it justice; heck the *videos* I took don’t do it justice!

Obviously the area is good for sealife too, and while unusual, it’s not unknown to spot dolphins or even whales whilst on one of the inter-island ferries. Obviously I didn’t, but on the ferry from Berneray to Harris, I did overhear a conversation amongst a family saying that last time they took that ferry, they did see a couple of dolphins off the side.

Seals are also fairly common, especially in the north; Lewis is noted for them, whilst on Berneray there is even a bay on the east coast known as Seal Bay. It’s probably not beyond the realm of imagination to know why, though disappointingly I didn’t see any on my visit. 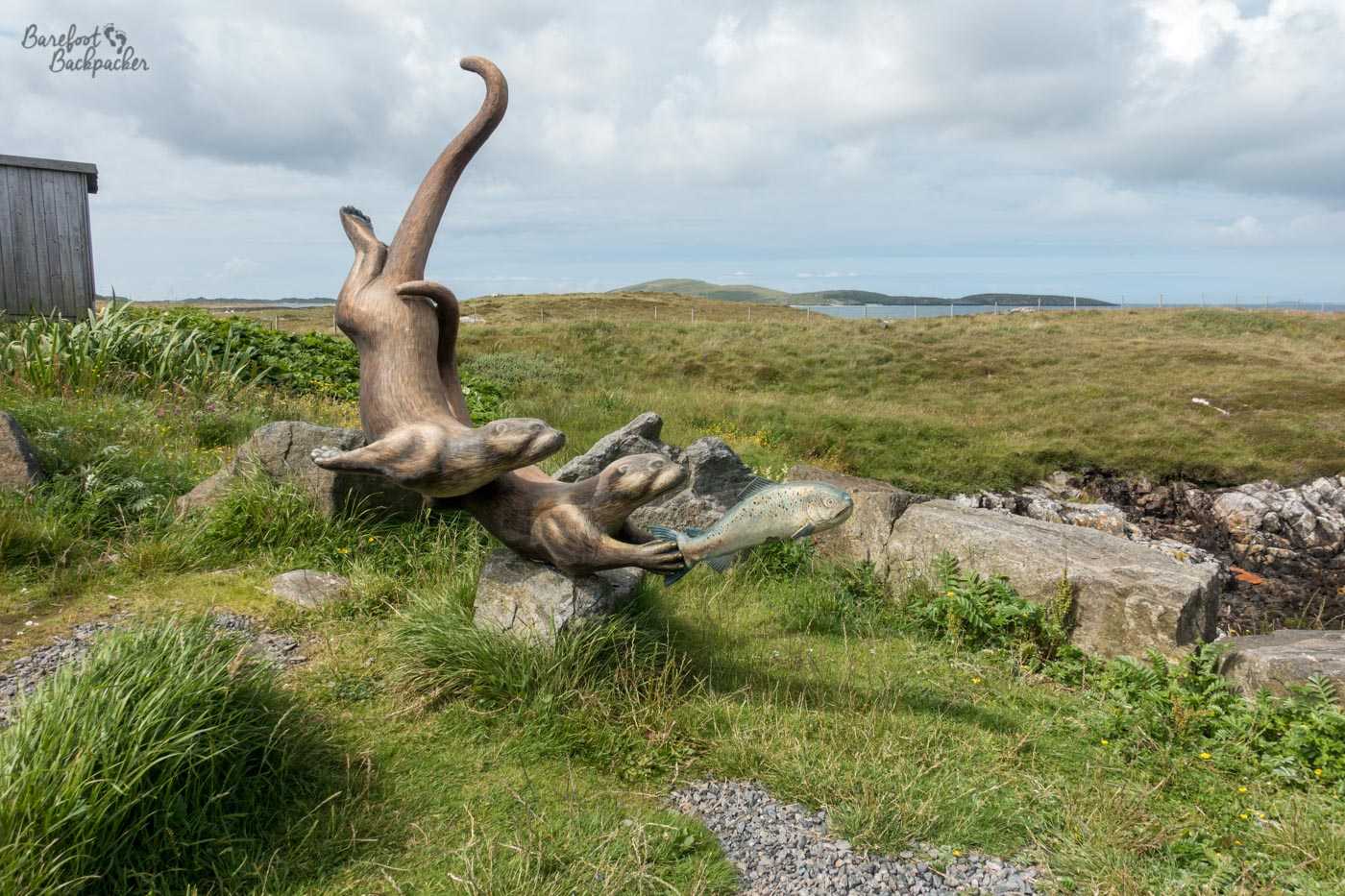 Otter sculpture on Barra, at the Eriskay ferry terminal

Another animal I didn’t see at any point, but which is pretty common across the islands, is the otter. It’s so common and ubiquitous that not only is there an otter sculpture at the quayside in northern Barra (where the ferry to Eriskay departs from), but at pretty much every causeway there’s a ‘beware of otters’ signpost.

I didn’t even encounter many midges; the wind apparently keeps them at bay. 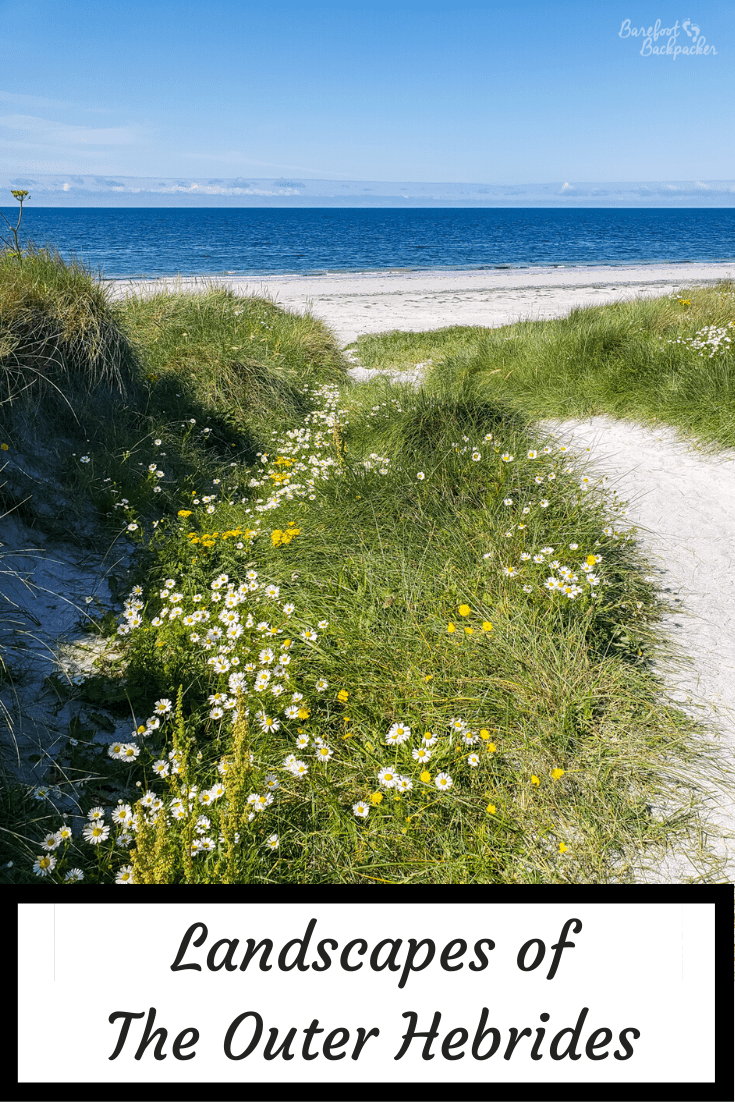